I do not generally group walks, but here, I am making an exception. Two days walking combined in one walk report.

I had printed off the routes and everything was packed. I was just checking my emails when my son, Thomas, asked "What is the campsite like Dad?" I did a quick Google Image search for Kilvrecht campsite to bring up some pictures. "I'm coming!", he said!

After packing his bags and ensuring that he had suitable clothing (including his mother's fleece sweater); then sorting out some extra food, we were off.

We stopped off at Tiso's as he did not really have any suitable legwear, but after lightening my wallet

, Thomas was fully kitted out with his new Bear Grylls trousers and Sprayway overtrousers.

I was delighted to have Thomas along but the forecast was by no means great and the routes I had planned included pathless terrain that I knew Thomas would find challenging. Deep heather and bog is even harder going for those with short legs.

I had already packed a three-man tent rather than my Hilleberg Soulo, so there was going to be plenty of room for the two of us. This was the to be the first time using the tent since 2011 and I was happy to be getting some use out of it. 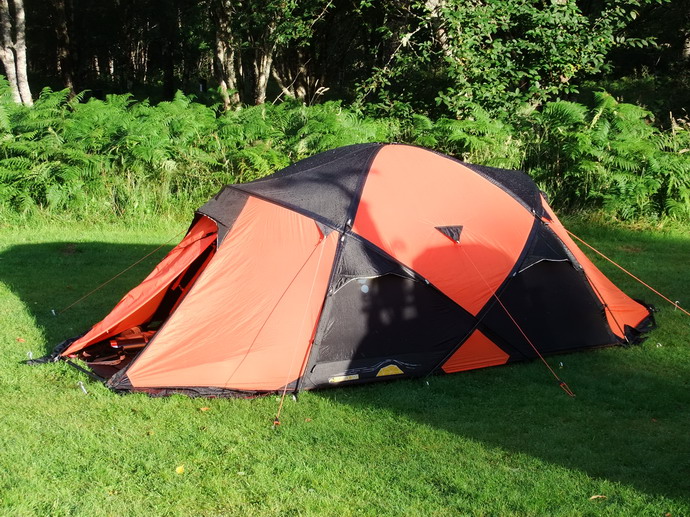 The We hid our bikes down the side of the bridge in Kinloch Rannoch before driving to a small parking space near the bottom of the B847 which I had found using street view on Google maps before my departure. The route starts up a track to Drumglas. This grassy track pleasantly meanders upwards making the going easy. While Beinn a'Chuallaich remained permanently shrouded in clagg, the summit of Scheihallion was often visible.

The route below is looking south-east with Loch Tummel in the distance left, Dunalastair Water and Scheihallion. The unremarkable looking Corbetts of Farragon Hill and Meall Tairneachan are also in view.

Kids need more stops than adults and Thomas had his first food stop where the track turned west through a broken down wall. The photograph below, shows Schiehallion, which was Thomas' first Munro, at age 6. 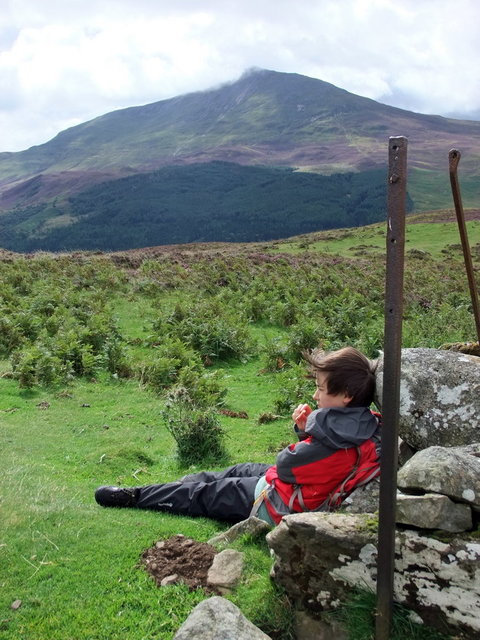 At our resting place, a faint path continued, while the track skirted left before a branch continues to a bealach west of the summit. We continued up the path as we were ultimately aiming to gain the south ridge of the mountain. This was perhaps a mistake as the heather and wet sections made it much harder going for Thomas. When we did gain the south ridge, we entered the clagg and wind driven rain. Thomas tended to drift away from me due to the power of the wind so I took his hand. A short distance short of the summit was this shelter which allowed Thomas to rest before the final short push to the summit. 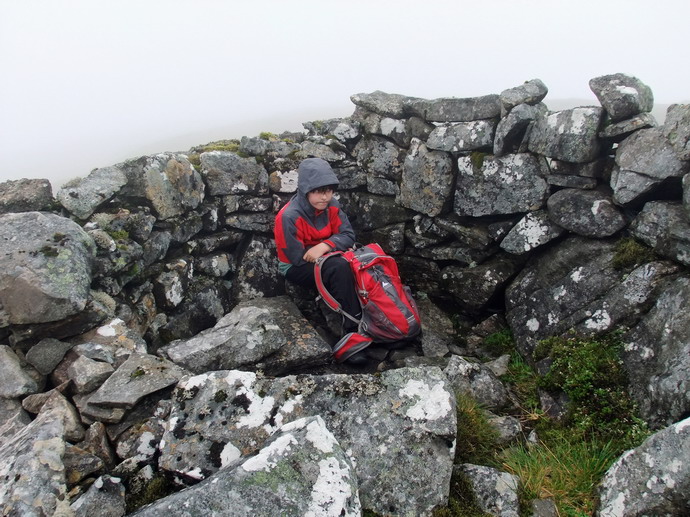 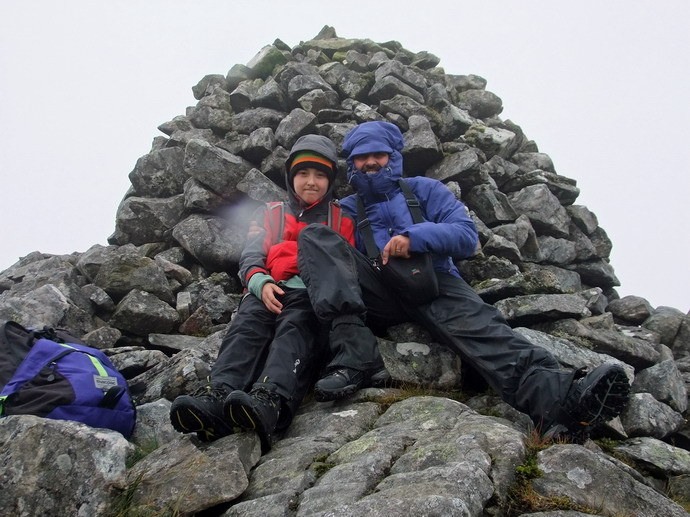 Thomas had been wearing a pair of my Bontrager cycling gloves and he removed them at the summit and that is the last we saw of them, so if you happen to find them . . . .

Leaving the summit, we headed westwards, directly into the wind and rain. However, Thomas' spirits had been raised by reaching the summit. Lower down, we stopped for a coffee break in a sheltered spot next to a burn. The sun was shining and its warmth was very much appreciated after the harshness of the earlier weather.

When we came to the burn below, I was concerned that Thomas might slip. He was not wearing gaiters and his "softshell" boots were already sodden. . . . . He seemed to dance across in perfect balance. 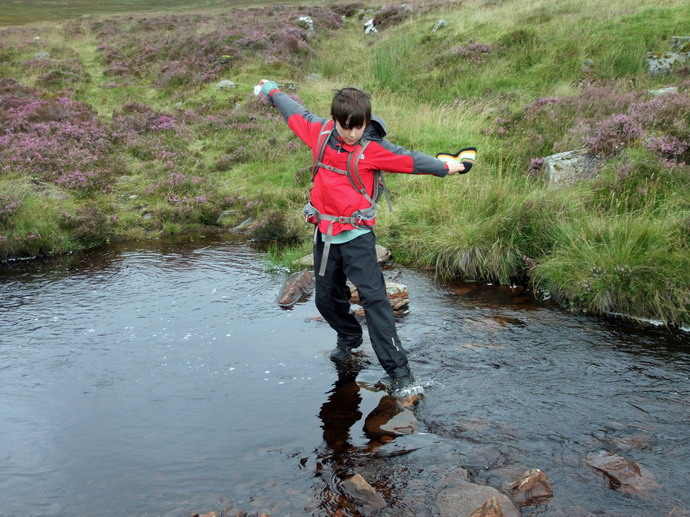 Further down, a relatively new, ugly, bulldozed track is reached, which was built as part of a hydroelectric scheme. Thomas took a slight detour to have his photograph taken on this sturdy footbridge. 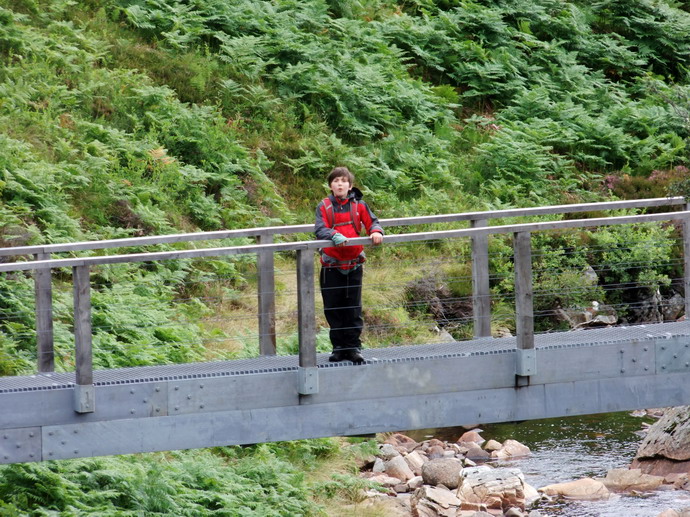 Soon afterwards, we met a father and daughter from Northern Ireland and, among other things, discussed the route options. We were advised that we could leave the track and follow the old path down through the trees to the hydro-electric station. 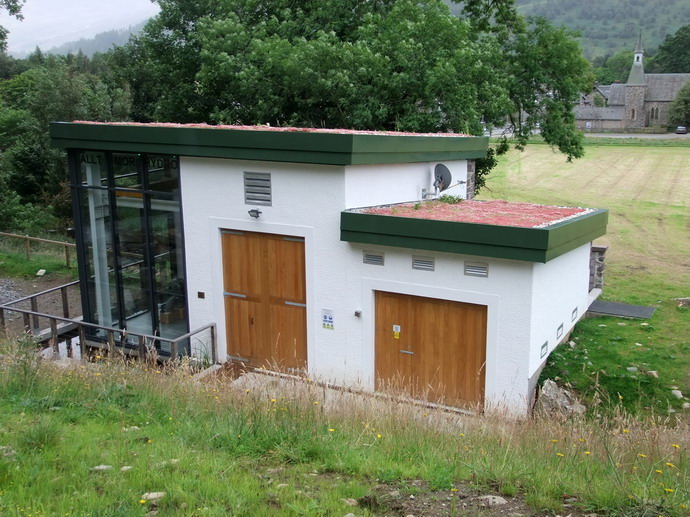 Once in the village, we headed for the Riverbank Cafe for soup before collecting out bikes for the 20 minute ride back to the car. Mission accomplished and the day made all the more special and memorable as it was in the company of my son. 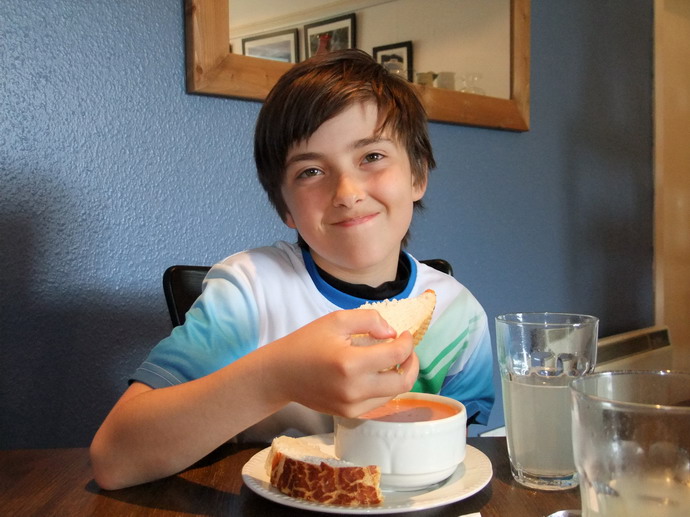 The next day saw us heading for Kinloch Rannoch before heading up the north shore of Loch Rannoch to Bridge of Gaur.

I was unsure where to park but an old man told us to park at he hall. He talked about Leagag being a fine hill and referred to "Garvall" (Garbh Mheall). He was surprised by our intended route and expressed doubts about whether we would return before nightfall. He asked if I was on my own. When I explained that I was with my 11 year-old son. His response was to rush to the passenger door of the car, open it and ask if I was forcing him up the hill. His behaviour seemed very strange, but I think that he was just being friendly (in a totally uninhibited way!).

There is a more obvious track but the old man told us that it was just a forestry track that does a big loop without connecting to our planned route. Our track was greener and rougher, starting the other side of a small burn from the hall. There is now a pedestrian gate for access (This image August 2011).

The start of the route (2011 Google street view)

This was Thomas' second consecutive day on the hill, but he seemed fully recovered from the previous day and in good spirits. He struggled biking uphill and we were soon pushing our bikes. Thomas decided that mine was easier to push because of its larger wheels - a reasonable hypothesis, but one that was soon to be revised. 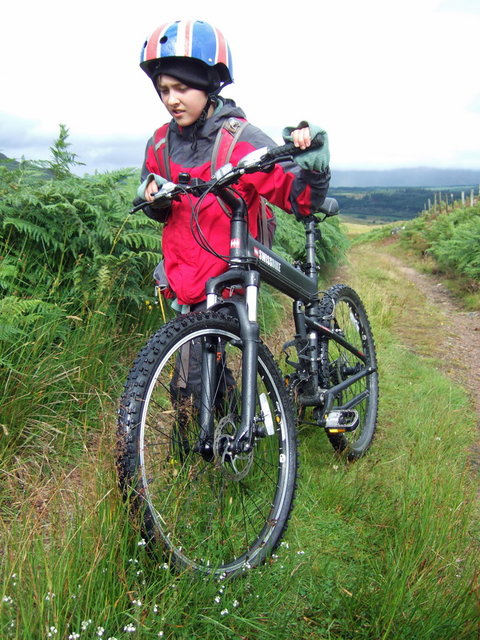 We stopped to eat our sandwiches at the bridge where we locked our bikes. The bikes gained us little time on the outward journey but they were a welcome sight later in the day and resulted in a swift return. The next section was easy along good tracks. 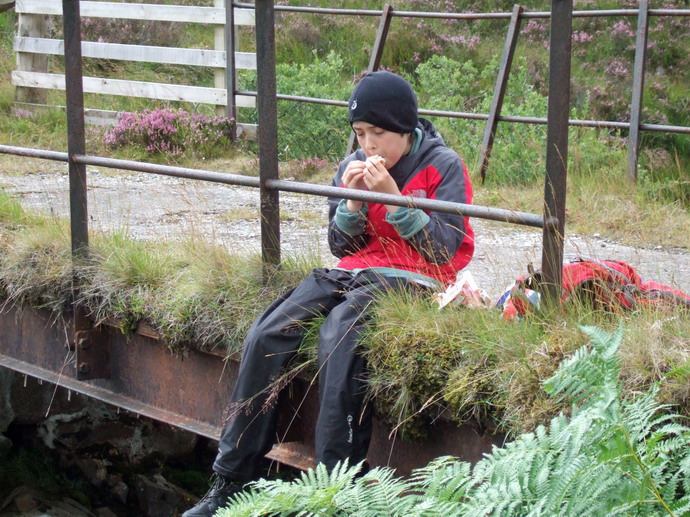 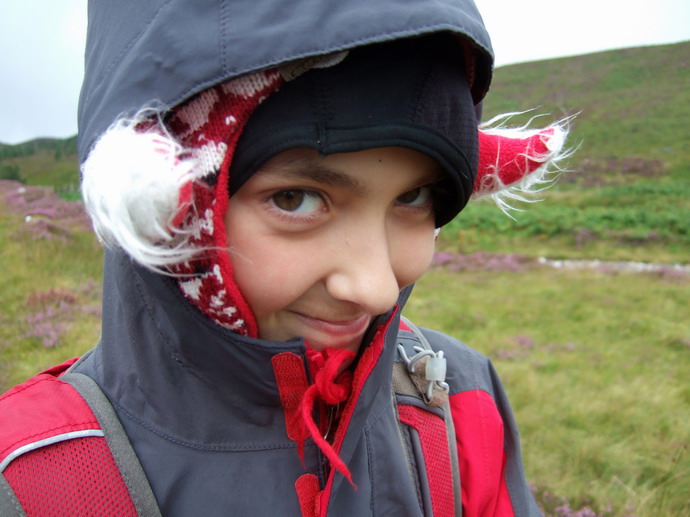 Beyond the end of the track, the going was tough. On approaching Meall Buidhe, we saw a couple ahead of us. I tried to encourage Thomas by asking if he thought we could catch them up. He, of course, said yes. I was thinking that joining them on the summit would negate the need to faff about with the Gorillapod. Humans make much better tripods! (Sorry, I mean bipods!

) However, they passed us when we were about 5 minutes from the top. They had decided it was too cold to linger on the summit and headed straight back down. 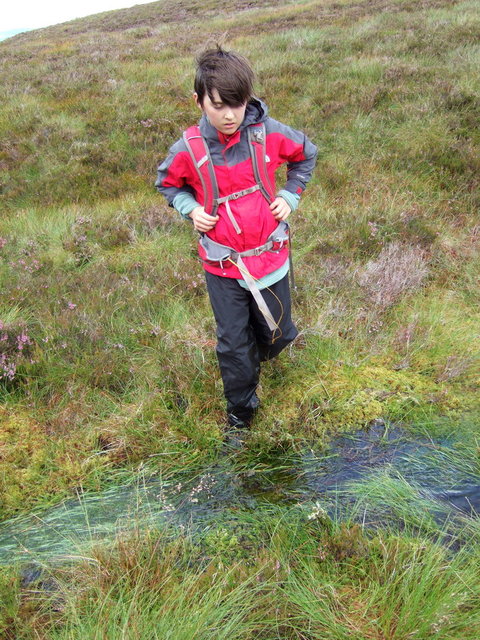 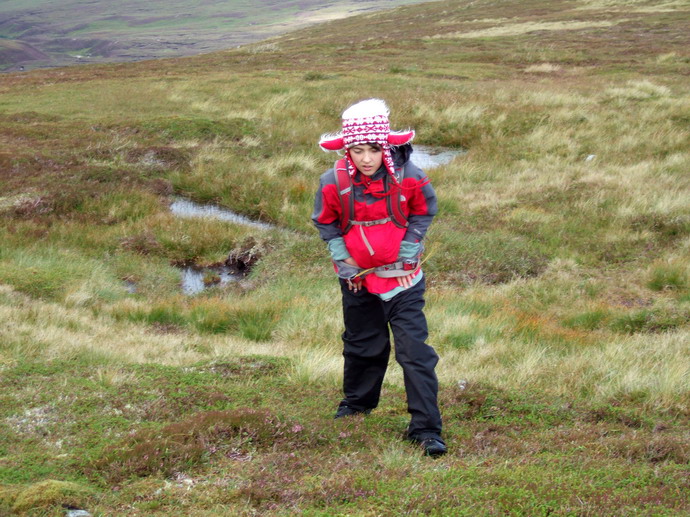 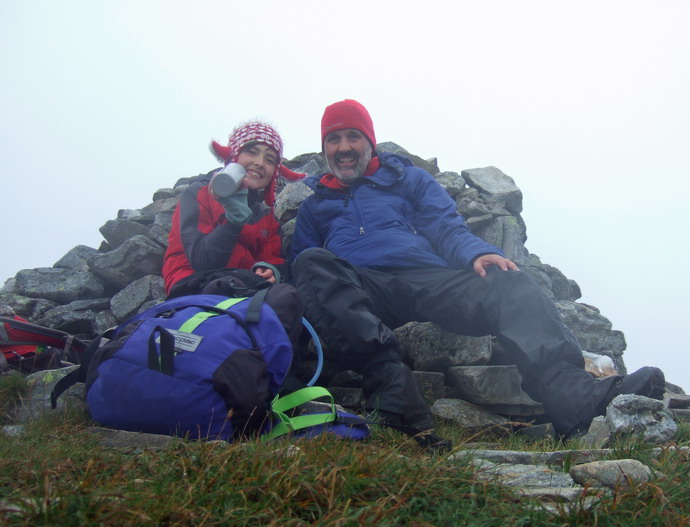 We continued to the Garbh Mheall which falls just short of 3000ft and is not therefore a Munro top. This seems to be the preferred name for the whole mountain by those living around Loch Rannoch, at least going by my conversation with the old man at the start. While Thomas looked tired when walking uphill, he looked very happy heading down and was very happy to see the gate where we had parked our bikes. 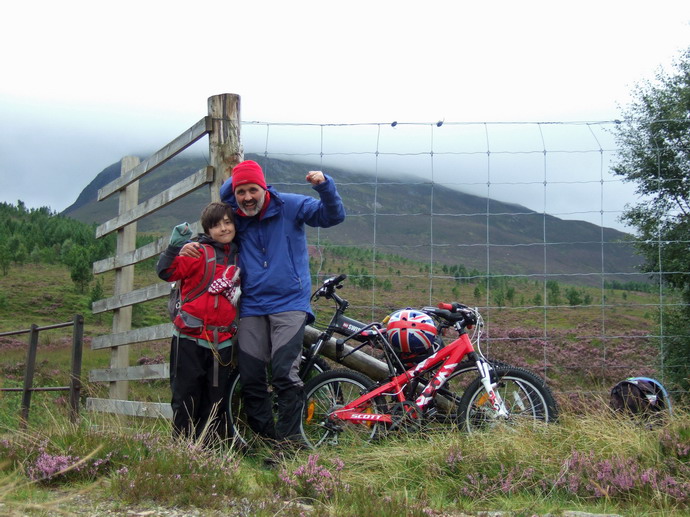 After talking to a runner, we mounted our bikes. Thomas really enjoyed the ride back to the car. I was concerned that he might catch a pedal on the edge of a rut, but other than failing to make it all the way across a particularly deep puddle, he was fine! I thought that we had been free-wheeling at a fair speed but the runner was never far behind. 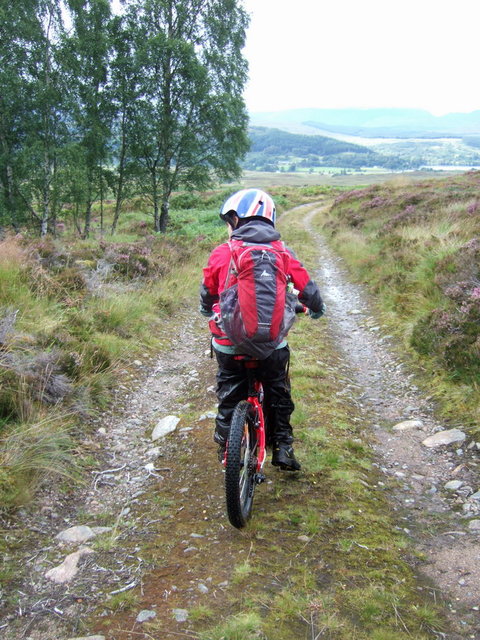 Not great weather but a special day, doing what I love with my eldest son. I look forward to the day when his little brother can join us!

Well done Thomas, hope you enjoyed your days on the hill with your Dad. Now for the next father and son adventure

Did a couple of the Welsh 3000ers last weekend with my 7- and 10-year-old grandsons, so I can really relate to this. It's just wonderful.

Thomas certainly seemed to pick up enthusiasm (compare early couple of pics with the last few...