Park at the waterfront car park in Lochgoilhead village opposite the Post Office. 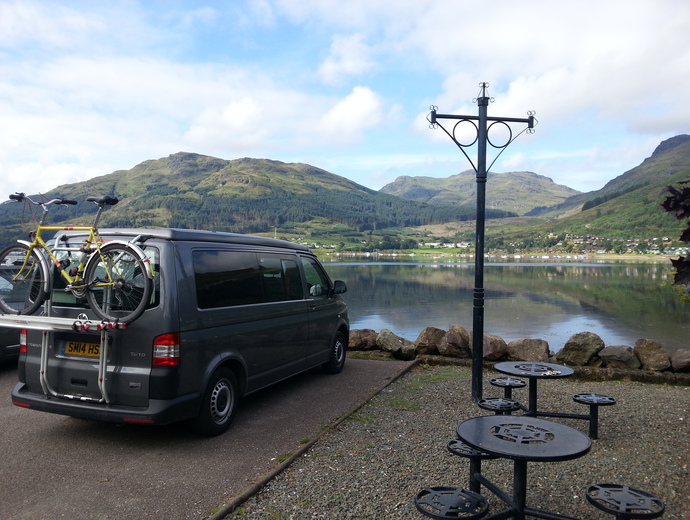 Take the track almost opposite the entrance signposted "Cowal Way". There are public toilets on the left here. 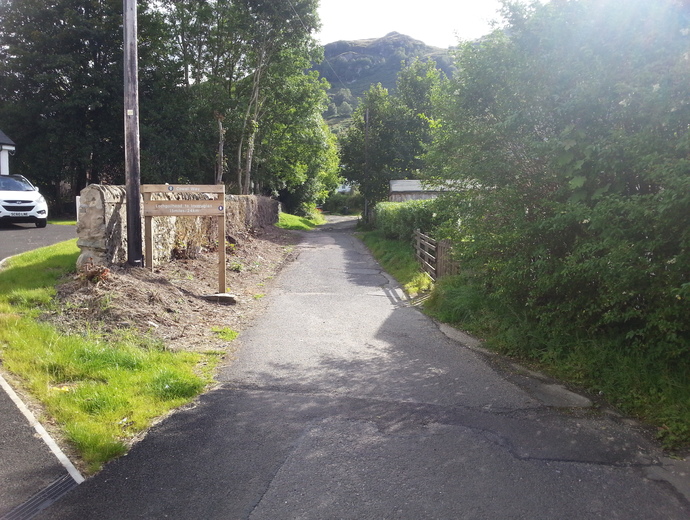 The start of the route, signposted for the Cowal Way

Follow the path uphill to the edge of the village. Cross the "Dukes Pass" cycle track and follow the clearly-marked Cowal Way diagonally uphill with mature coniferous forest on your left.
Eventually the path goes through a gate and there is forestry on both sides, but the way ahead is clear enough, leading into the confines of the glen of the Donich Water.
The path drops slightly to some pretty waterfalls. Cross a bridge and immediately take the right fork waymarked "Cowal Way and hill path to Coilessan". 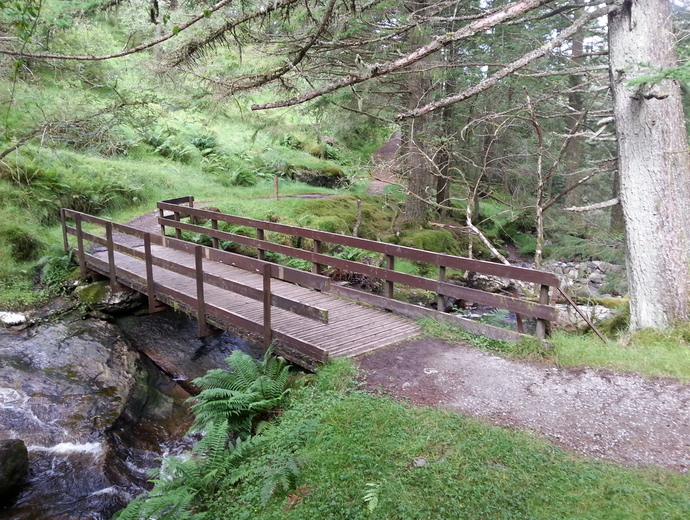 Looking back to the bridge where the path fork

The path now climbs steeply through the trees.
After some time the path comes to a right angle turn and heads even more steeply and now rather wetly uphill through a fire break.
A sign indictating "Coilessan" reassures that the correct route is being followed.
With some relief the tree line is eventually reached, and the path goes over a stile onto the open hillside.
Follow the path, now marked with white marker poles through rather rushy ground until the high point on the crossing to Coilessan is reached, where in good weather the outlines of the Brack and the Cobbler show boldly to the left. The highest point is marked by a Cowal Way waymarker. 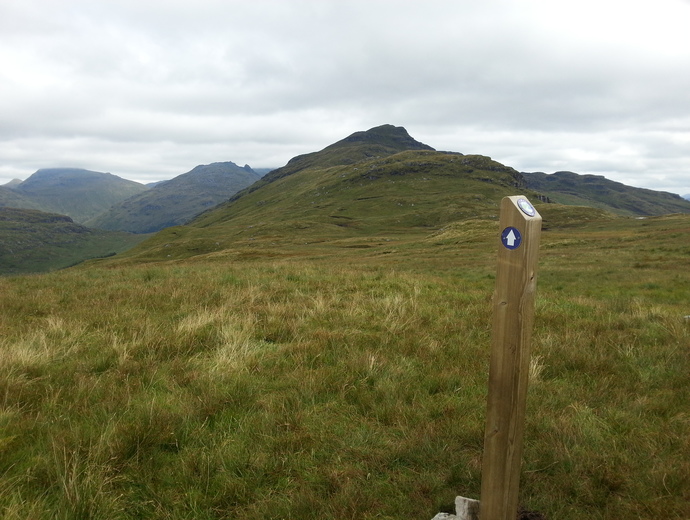 Here turn rightwards uphill, following the line of the highest ground. A single "main path" has not yet developed although this will no doubt happen since the hill's "promotion" to Corbett status. A knoll with a prominent steep schist cliff on its North is a good navigation point. 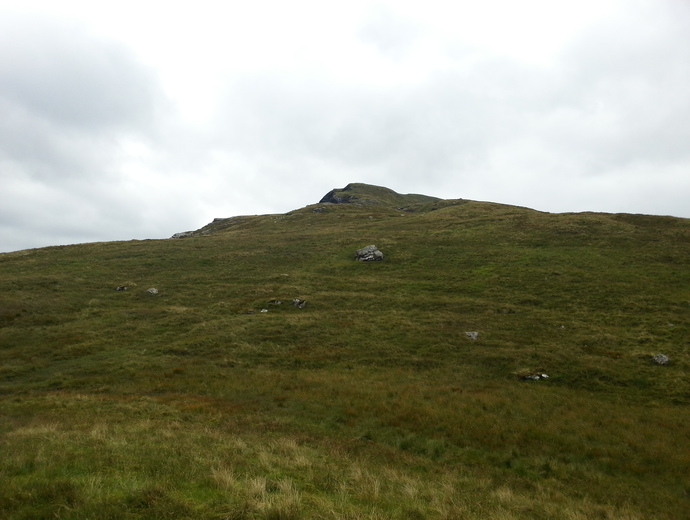 Steepening round on Cnoc Coinnich

Turn it on its right and move onto the high ground, now on short cropped grass.
The summit of Cnoc Coinnich now lies ahead and its small summit cairn is easily reached. 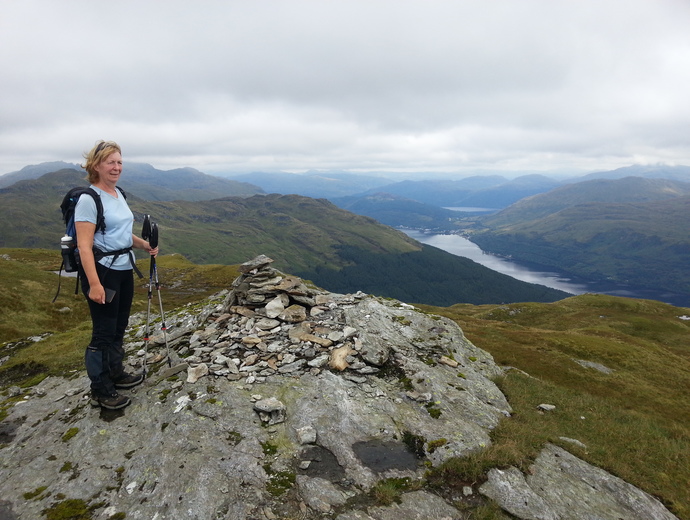 For those who like that sort of thing, a steep scramble up a short wall from the north can lead directly to the cairn, (entertaining in dry conditions) but the top sections is sloping, mossy and without reassuringly positive holds.
The views from the summit are expansive in all directions, to the Arrochar hills, Tarbert and Loch Lomond and south and west down the sea lochs to Ailsa Craig and Arran and the closrer less salubrious landmarks of Coulport and Faslane. 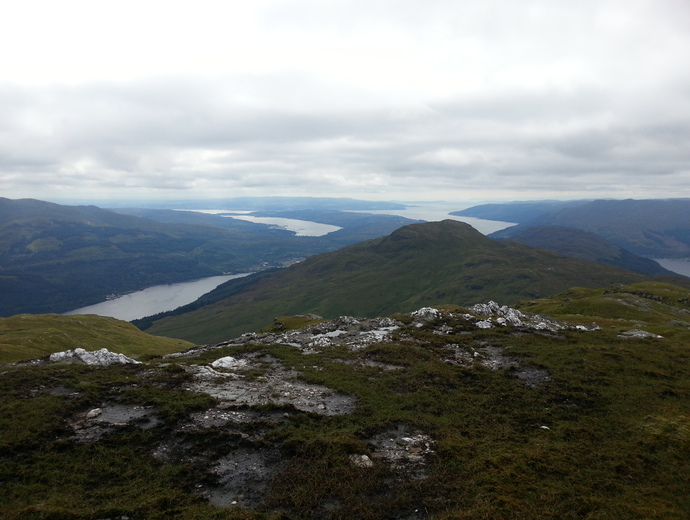 We returned by our outward route, but it appears one could also take in the Brack, or on a longer outing Ben Donich too; or make a circuit southwestwards to link up with the Dukes Pass for a return to Lochgoilhead.

Shame really, as it looks a good hill. Glad you got to enjoy it though

Fantastic must do route!

The route description for this hill was fantastic and exactly as it is. Nothing was missed allowing me to complete it in 2.5hrs.
The one thing I don't understand is why on earth when this is such a great route does anyone do it from the boggy muddy motorway Ardgarten direction.

Re: Fantastic must do route!

Dunders wrote:The route description for this hill was fantastic and exactly as it is. Nothing was missed allowing me to complete it in 2.5hrs.
The one thing I don't understand is why on earth when this is such a great route does anyone do it from the boggy muddy motorway Ardgarten direction.

Didn't do the corbet, but been over the bealach, where the ground rippled under my boots like a water bed