An Teallach & the Munro cherry popping ...

An Teallach & the Munro cherry popping ...


Ok, this is the very, very, very last report from the WH 2016 Inchnadamph gathering - the meet that dare not speak it's name ...
I suppose An Teallach isn't a bad place on a good day to forge ahead with one's first Munros - and that was the case for loyal hound Maisie and my eldest son Alex, denied Conival and Ben More Assynt by bad weather, although Quinag the previous day had been a fine alternative.
Leaving Inchnadamph at 7am on a glorious sunny morning (typical) we got to Dundonell in time to be leaving the small parking space just after 8. The same crew that had been up Quinag was present, the three of us plus Callendergirl and Borderhugh. 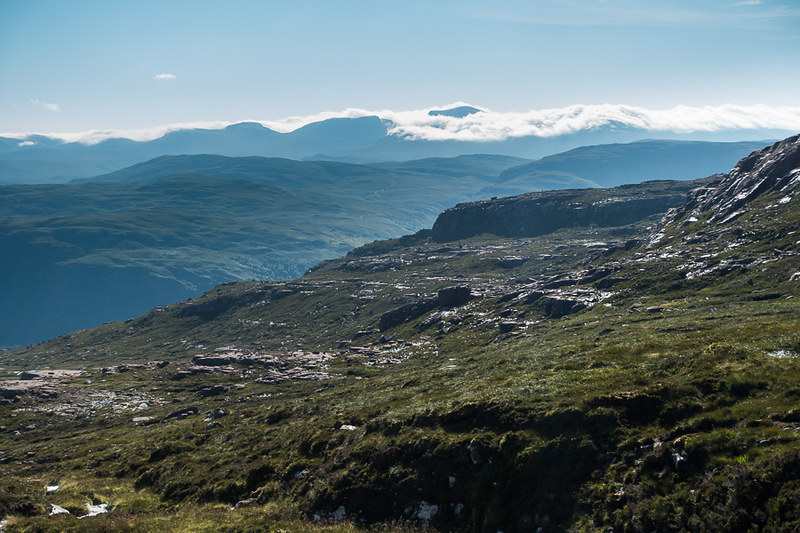 We took the path that led up into the bowl of the Allt a'Mhuilinn, good in the main but with some increasingly boggy bits as it flattened out, before drying out again as the higher reaches of Coir' a' Mhuilinn were gained : 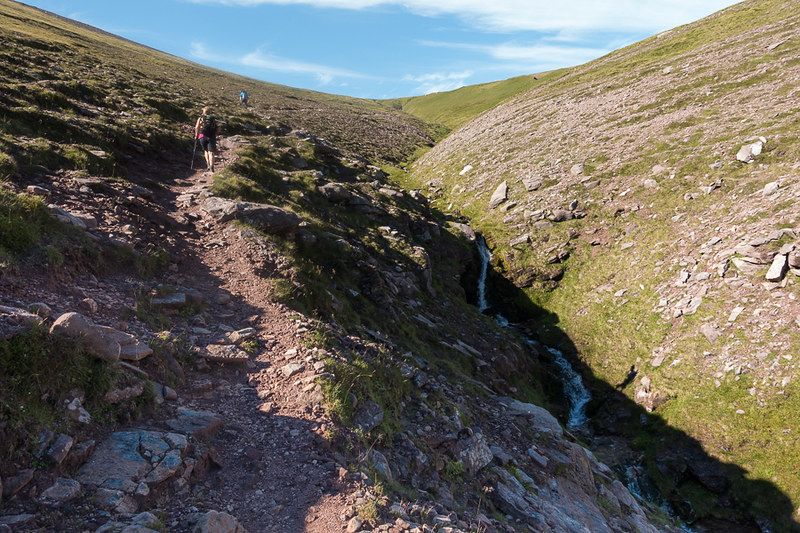 Now, I'm not quite as daft as I look, and I had seen many photos of the iconic majesty that is An Teallach, but it just didn't feel like we were on the same mountain, ascending steadily but gently in this relatively enclosed glen - as if we were sneaking in through the Tradesmens' entrance ...! All looked quite benign, looking back north to Assynt hills: 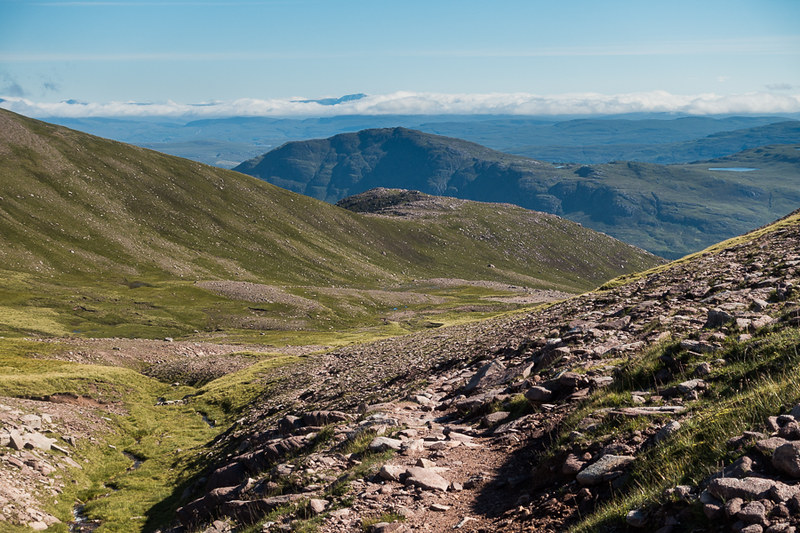 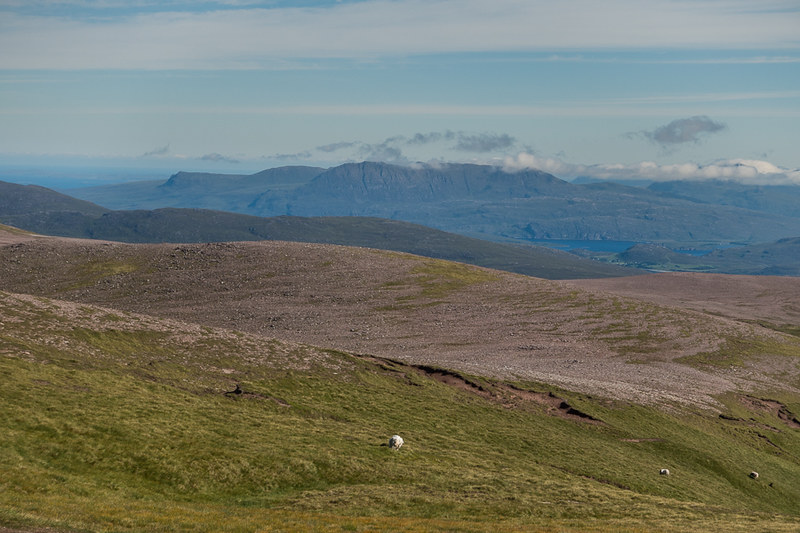 However, things have a habit of sneaking up on you when you are in plodding mode, and before too long we found ourselves at the beach to the south east of Sron a Choire, and about 870m of ascent in the bag, mostly fairly gentle. After a nosebag break it was time to march on and get our initial greeting of the first Munro, Bidein a' Ghlas Thuill... 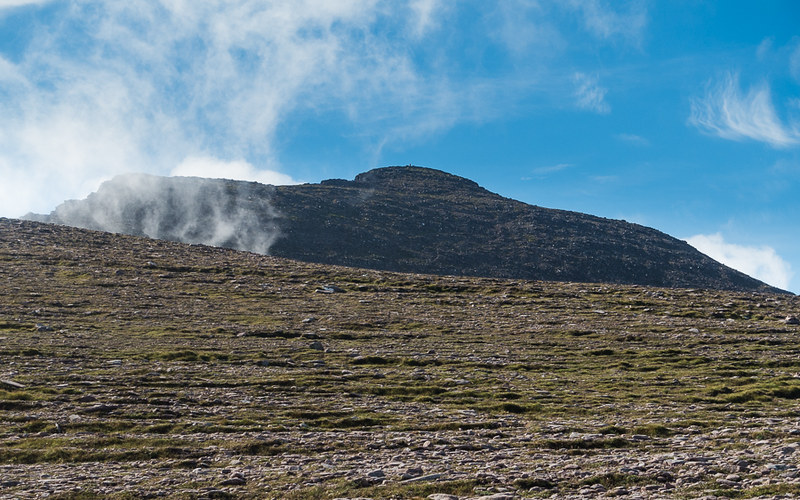 As if on cue, the mist started to appear and perform some unnecessarily flamboyant swirling around the summit mass, giving it a slightly more ominous feel: 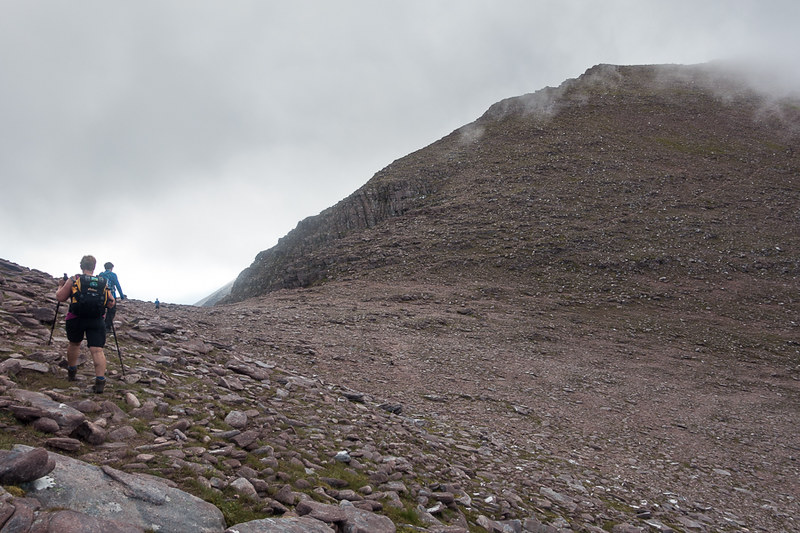 Despite that we still had great views opening up, Glas Tholl to the east: 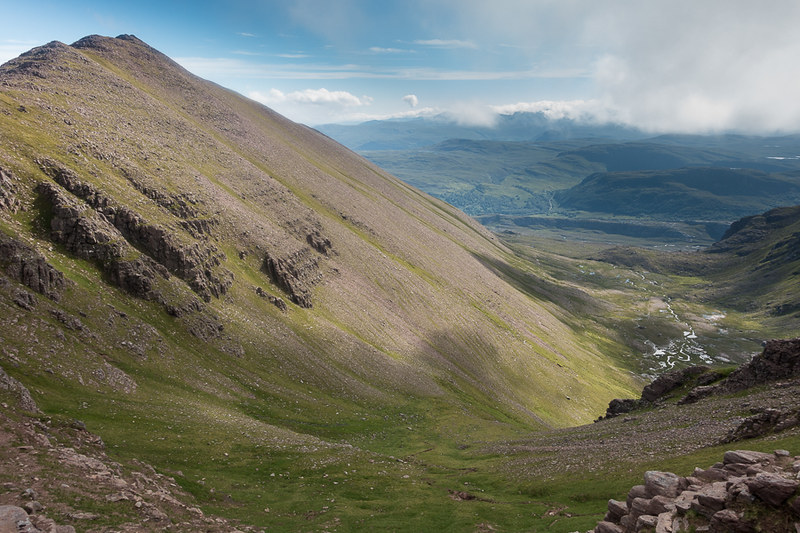 West to the sea, and Hebrides (Clisham?) beyond: 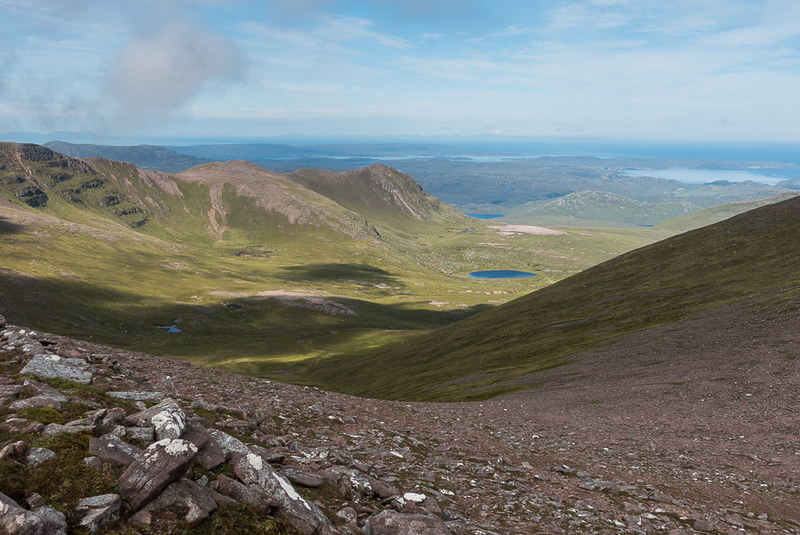 Sadly the mist was down in force by the time we'd ascended the stony scree path to the summit - a long drag but gets you up quickly, first Munro for Maisie and Alex, cherry safely popped:

Occasional breaks in the mist gave a taste of views to come later, with a suitably ethereal feel: 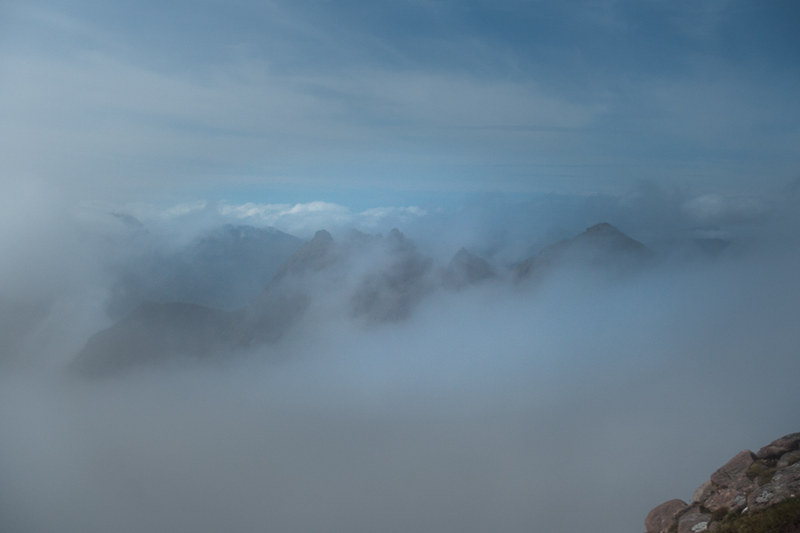 An easy descent to the bealach: 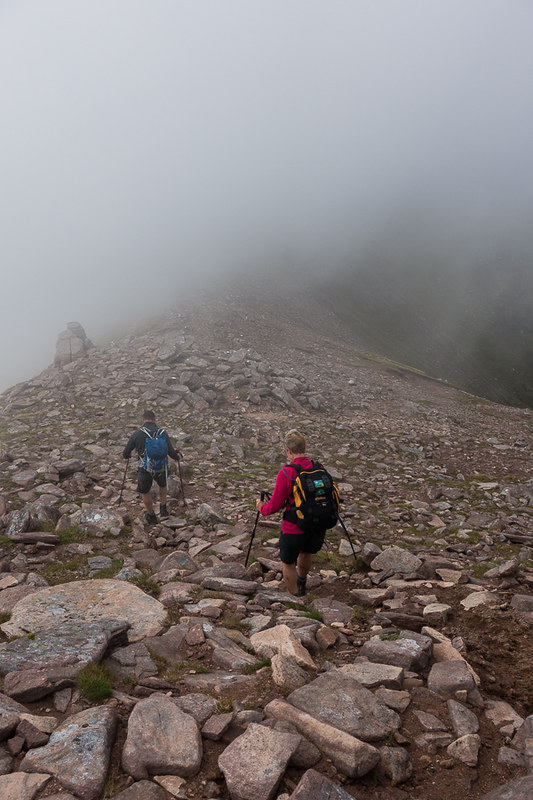 And then first glimpses of Toll an Lochain as we came out below the cloud: 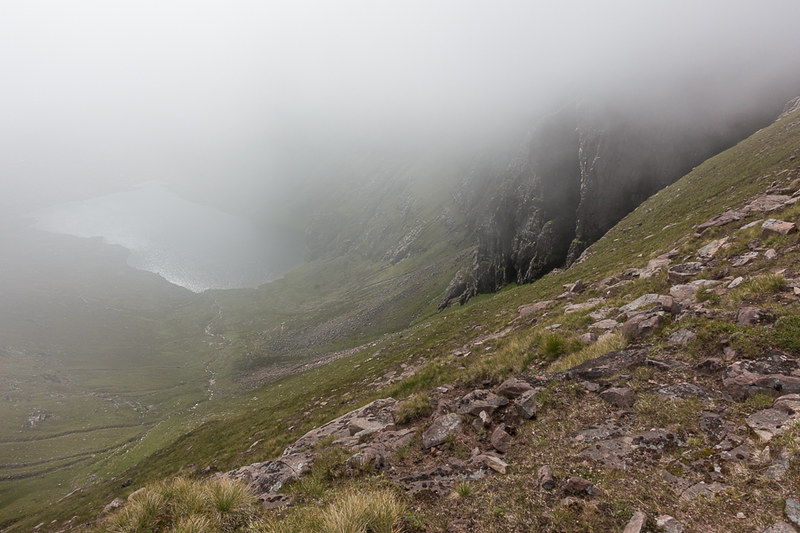 As we started the ascent of Sgurr Fiona the mist clinging to the cliffs started to thin a bit: 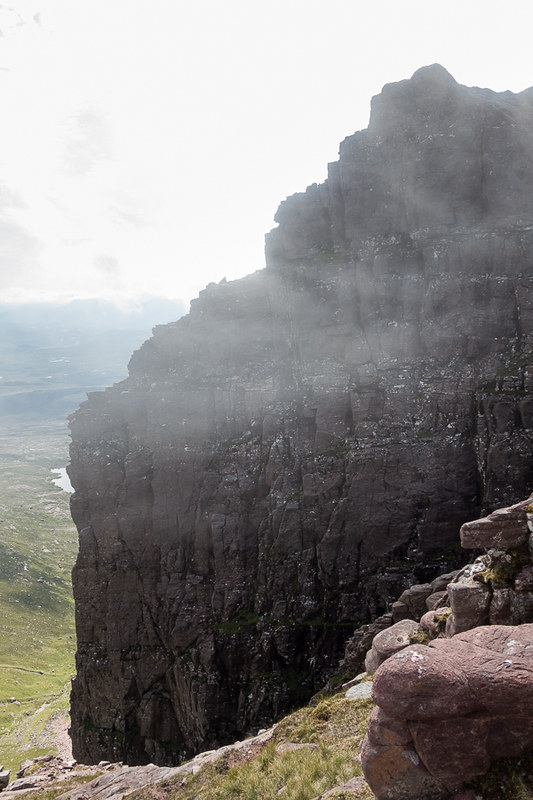 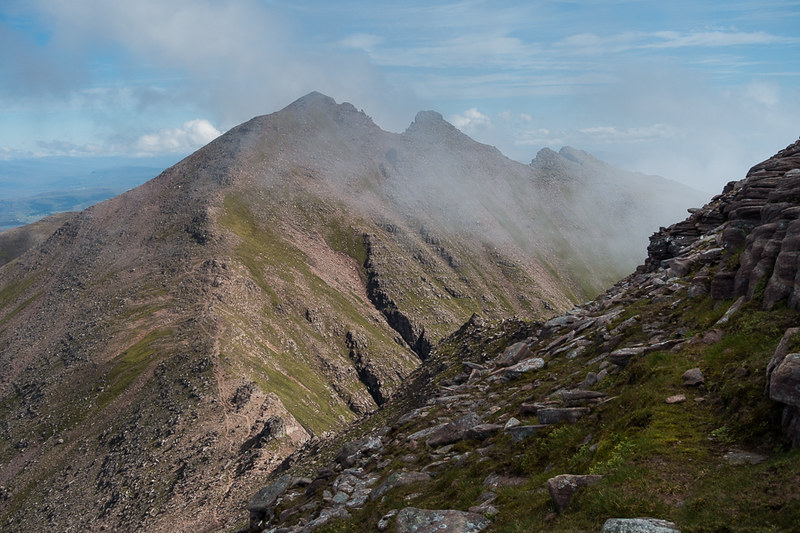 Suddenly the views to Fisherfield opened up, dominated by that superb Corbett, Beinn Dearg Mor, yet another of those iconic views that will live on in the memory long after the legs have given up: 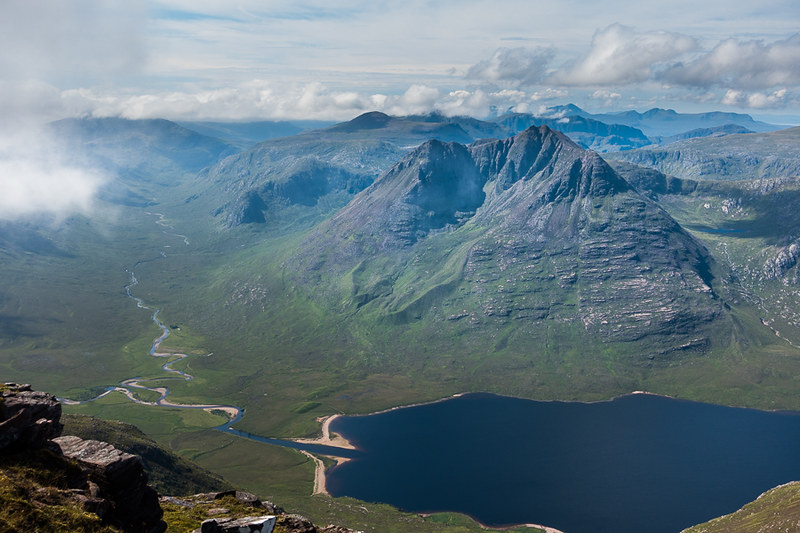 Yet again, views were limited at Sgurr Fiona summit due to mist, but two of the party were glad to have doubled their Munro count:

The mist did give some interesting atmosphere to the views though, looking back to Bidein a Ghlas Thuill: 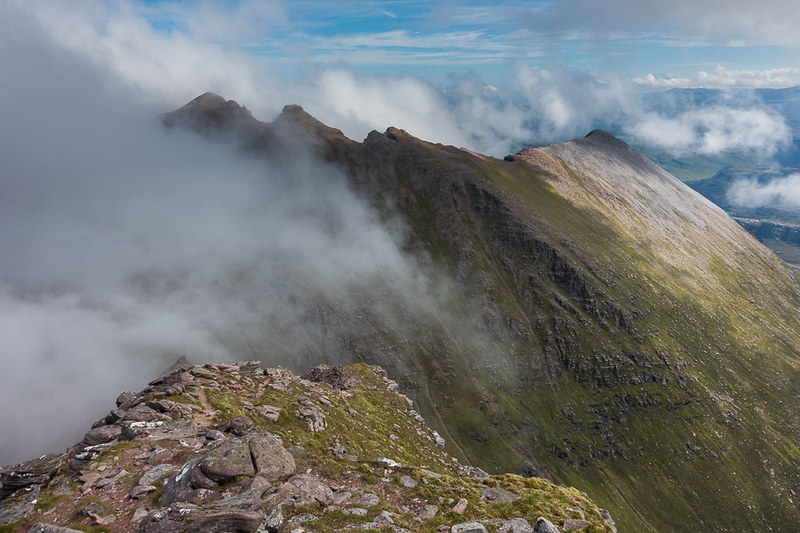 Of course, what we really wanted to see was those famous pinnacles, and we did get them, sort of, with a large dollop of swirling atmosphere: 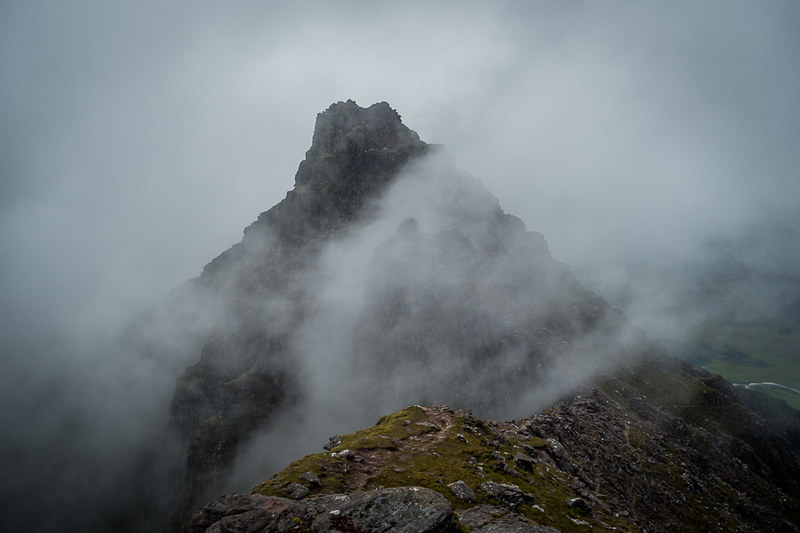 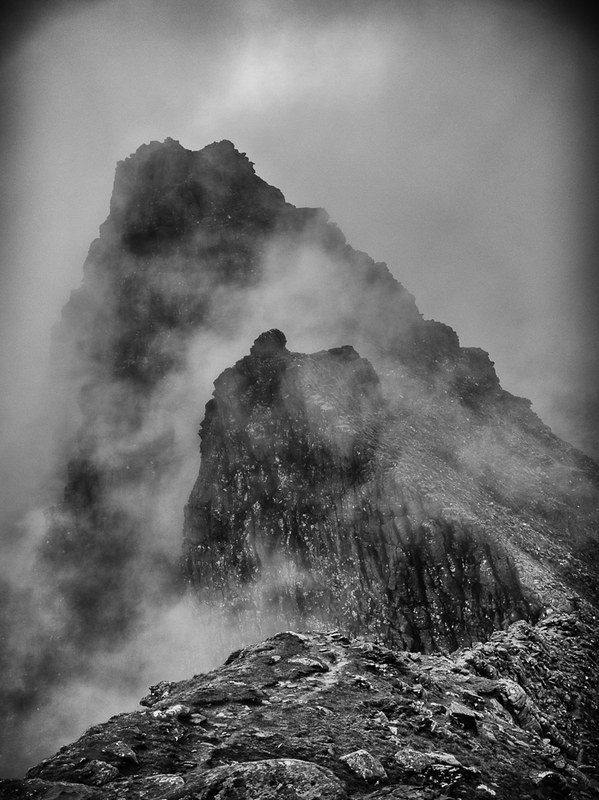 We were not planning to do the full traverse to the small matters of a small dog, and an eight hour drive back to Yorkshire, so had to retreat down the ascent route, but were treated to ever improving views, Fisherfield: 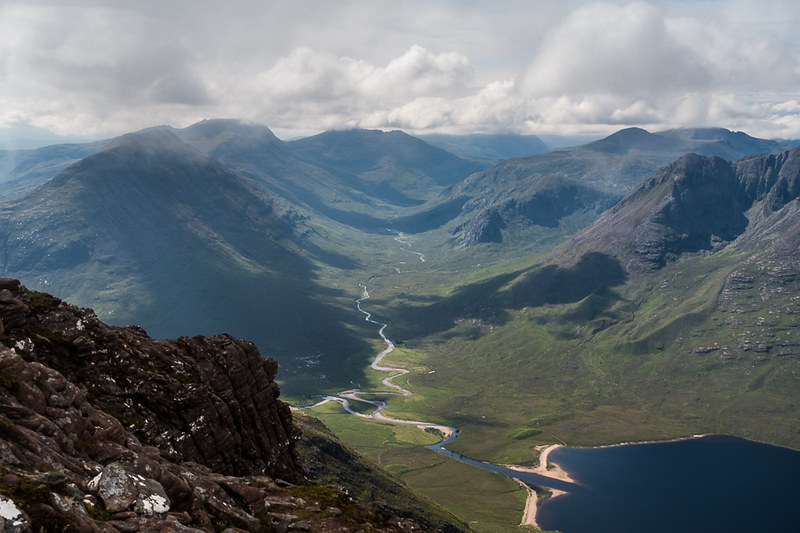 Contemplating the majesty of the great Wilderness: 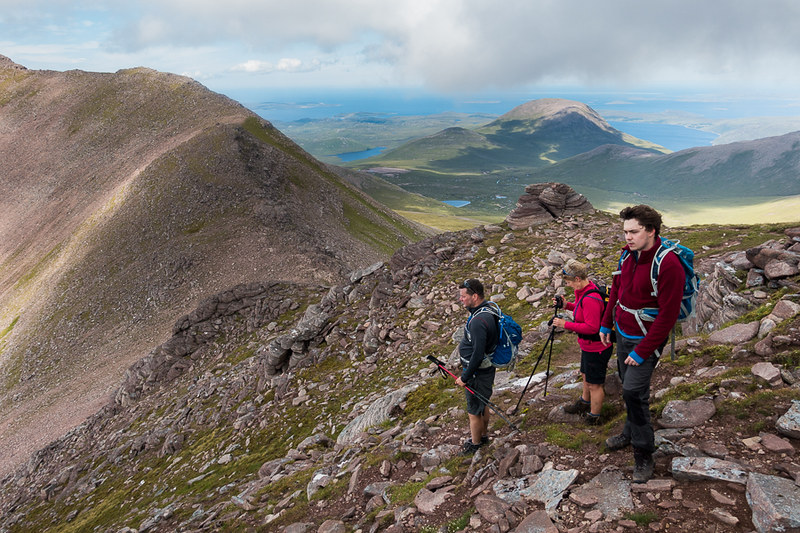 To get back to the start we had to re-ascend virtually the whole of Bidein a Galas Thuill, not as much of a pain as you might think as it gave us the chance to get better views as the mist lifted: 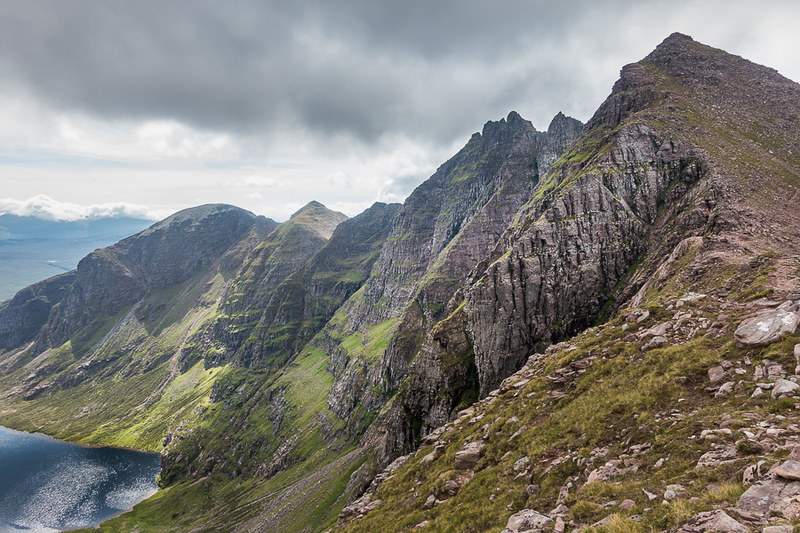 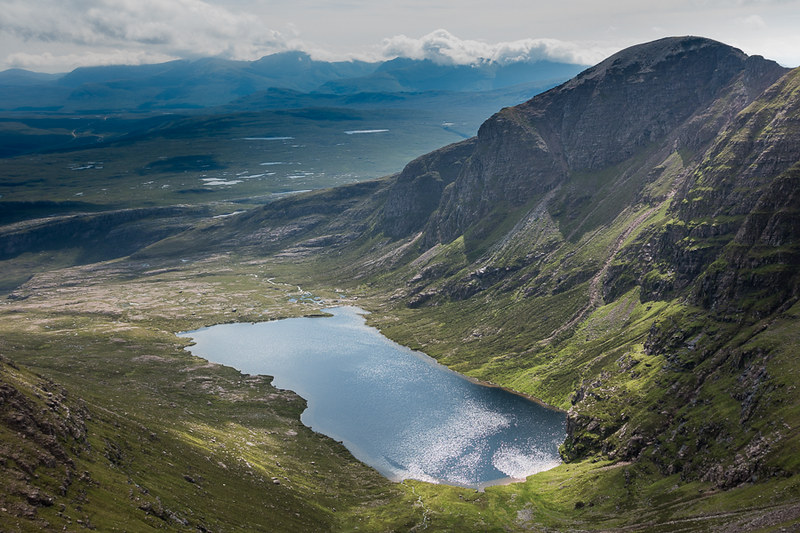 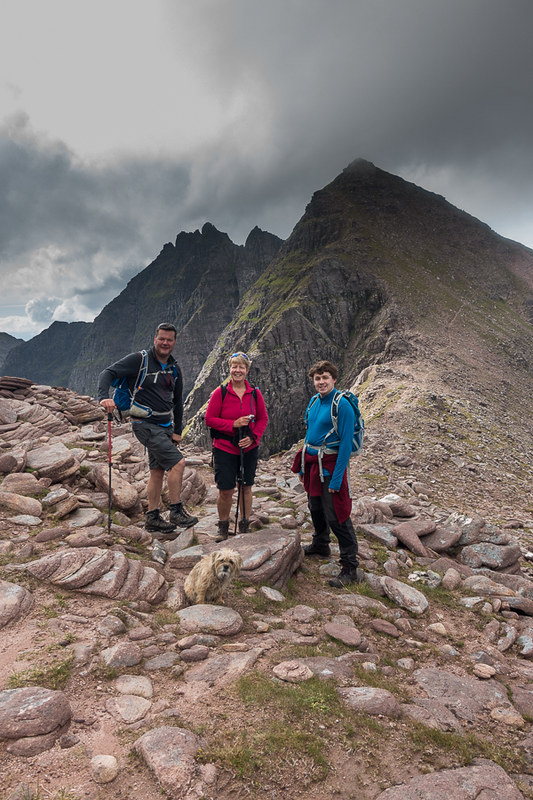 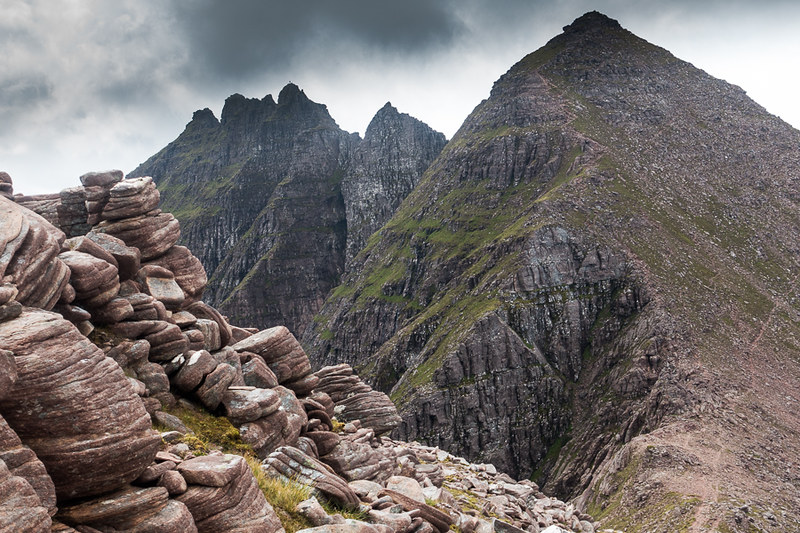 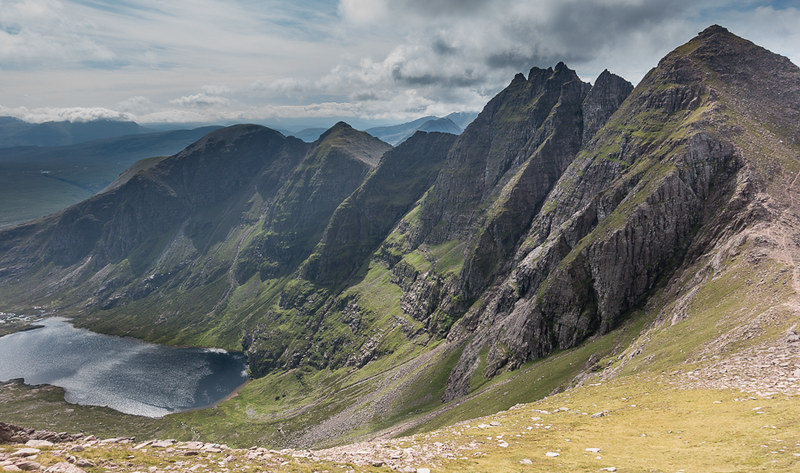 Time marched on though, and so did we, down the same way as ascent, but treated to great views north to Assynt: 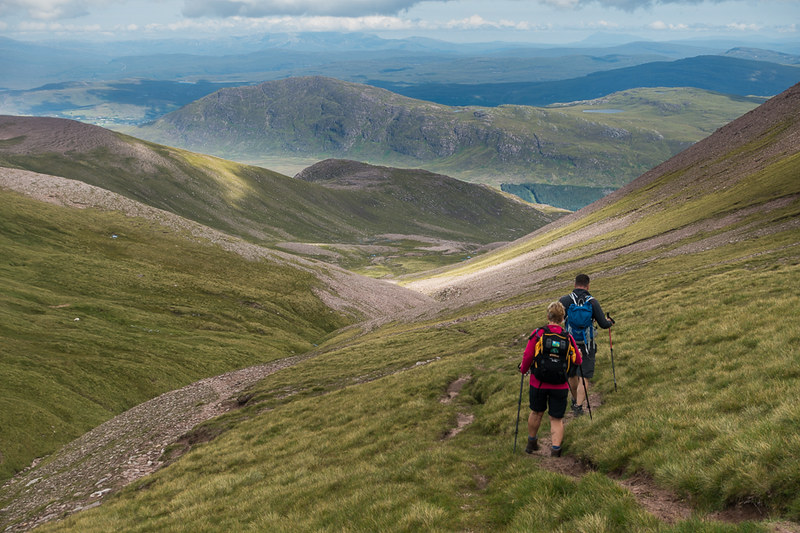 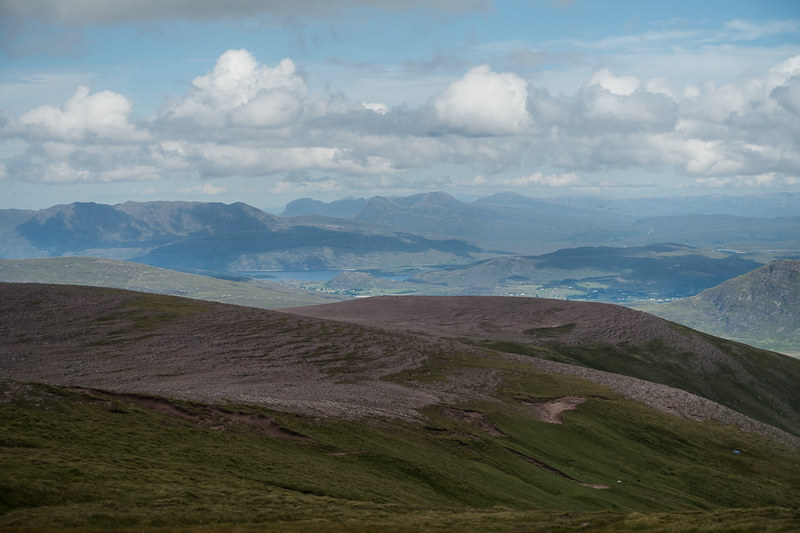 We got back to the cars at 2:30pm and said our farewells, Lynne to return to Callender, Hugh to disappear further into the Highlands, and Alex, Maisie and me to drive the eight hours back to Yorkshire's capital, but not before stopping on the destitution road to take one more snap of this beauty, now glowering under the gathering rainclouds: 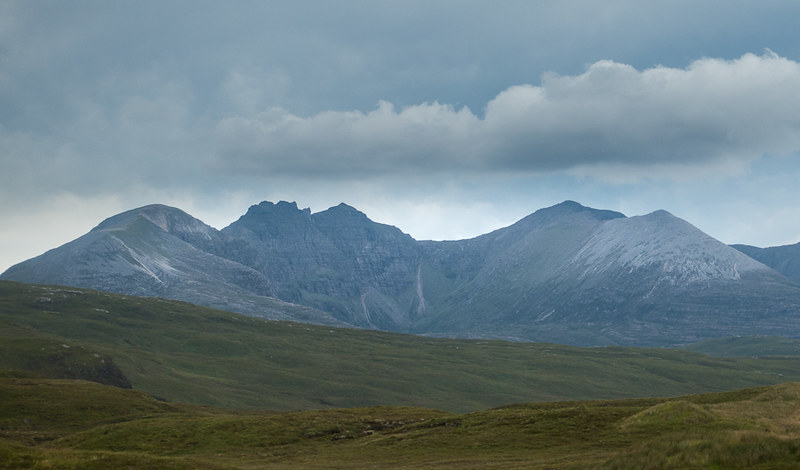 I think I feel a wee visit to An Teallach coming on in October!

Entertaining report, and some great pics. I particularly love the pic of Beinn Dearg Mor, which is rapidly becoming my most desired hill - if I get round to doing the Fisherfields, everything will be planned around this one! Almost worth getting up AT just to get that view of BDM....

What a beast to start with!

Good job & great photos, I like the black and white effect.