It had been a few years since I’d last got our on the hills with my brother so I was looking forward to heading up Ben Lui and Beinn a'Chleibh from Glen Lochy. In the run up to the weekend the weather forecast began to look poor. With heavy rain on Friday and a forecast for rain all day at Tyndrum I decided that discretion is the better part of valour and wading across the river Lochy was for another day.

However, the weather forecast of Ballachulish was for it to be dry all day till about 4pm in the afternoon, so I decided this would be a good day to tackle Beinn a’Bheithir and the munro summits of Sgorr Dhearg and Sgorr Dhonuill.

The drive from the south side of Glasgow was a wet one until we’d passed through Bridge of Orchy and the further we travelled along Glen Coe the brighter the weather became.

We parked up in the tourist information car park at 10:30 am and after asking a local the way to the primary school we set off. The iron farm gate that leads into the field the route guide describes is now more wood than iron. Its in a poor state of repair and you would easily walk by it without noticing it was there. 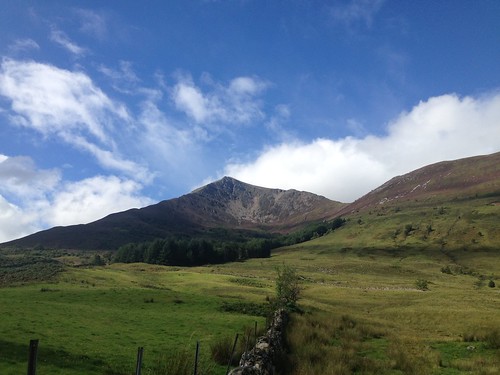 Once out the farm field we headed up the slope that is quite densely covered in bog myrtle. This ground cover means its hard to see where your putting your feet and at one point rather than come down on solid ground my foot when down a hole into a hidden burn. Fortunately I did not have much forward momentum at this point so no damage was done.

The path was easily found and was a welcome relief after working through the bog myrtle and heather. Looking back toward the village the pap of Glencoe looked spectacular. It looked like the backdrop for a magical film set and I took a moment to think about what a wonderful country we have the privilege to live in. 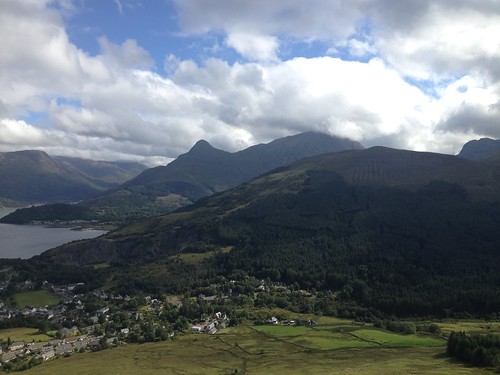 Once on the path we passed by a group of four younger walkers, although we were not going at any great pace. The path was easy to follow and the scree which is very light in colour reflected the sunlight. Shortly before the summit of Sgorr Bhan we found a spot out of the wind and had a bit to eat for lunch. 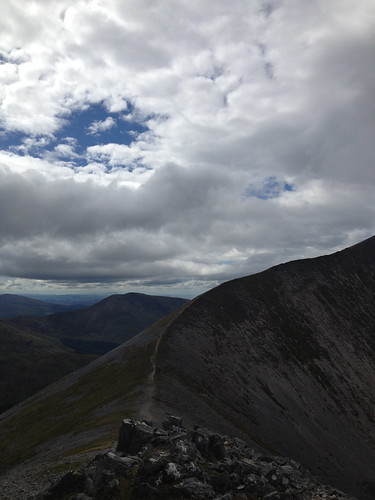 From the summit of Sgorr Bhan the ridge to Sgorr Dhearg looks much narrower than it actually is. The summit of Sgorr Dhearg also looked further away that what is was as without pushing the pace we arrived at this summit 20 mins after passing over Sgorr Bhan. Someone had left a bottle of MacMillan single malt on the summit cairn, but suspicious of its comments we looked at the bottle rather than sample its contents. 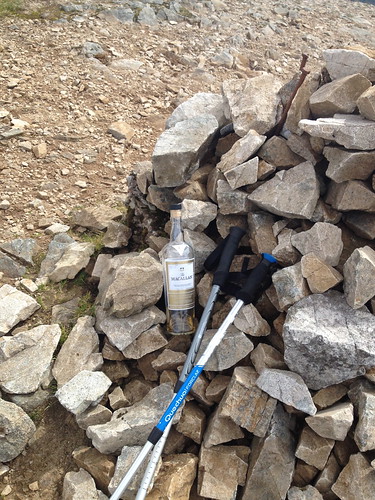 As we started to descend from Sgorr Dhearg to the bealach another group of four walkers came into view. We meet them just was they and we started the ascent of Sgorr Dhomuill. As we gained height new vistas came into view with the island of Lismore a handy landmark by which to orientate the rest of the landscape. To the south the Taynuilt peak of Ben Cruachan was prominent and looking seaward again the island of Kerrera indicated where Oban was. The thought of driving back to Glasgow via Oban stopping either there of in Inverarry for a bag of chips was at this point appealing. 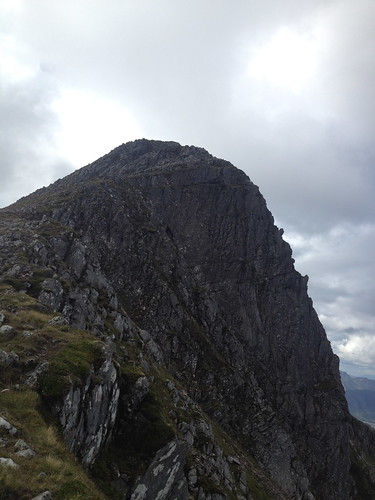 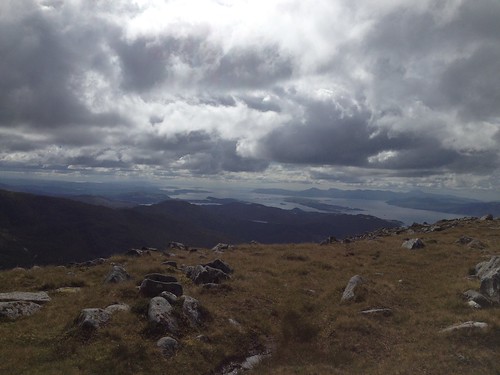 There was less scrambling to reach the summit than what I’d hoped for, but the proximity of the path to the cliff face gives some sense of height. Once at the summit we enjoyed the views and a wee cup of tea before retracing our steps back to the bealach and the old fence posts. From the bealach we could see the faint outline of the path the to forest that fills the lower reaches of Gleann a’ Chaolais. 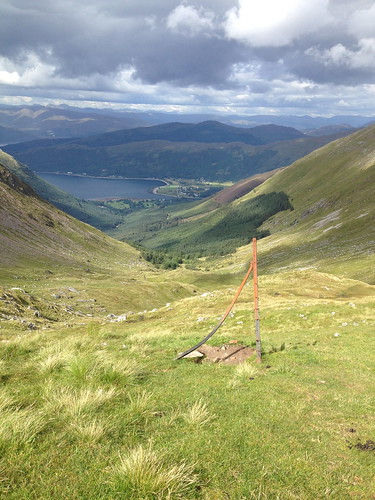 This path, which never strays too far from the fence line, nor the burn that flows from the bealach, is not only boggy in places but also very soft under foot. There were several sections where the ground gave way a little under my foot or where my foot slid on the soft ground as though on ice.

We followed the boggy path as it reached the trees and started to keep our eyes out for the cairn at the ‘ride’. We’d no intention of going down the old path at the cairn, but we never saw the cairn and shortly after what I assume was the ride referred to in the guide the path improves with flat stones starting to form steps.

Just before the path heads into the trees there is a gate that takes you through a fence. We continued to follow this path that was covered with pine needles, crossed the forest road and continued on the path until it deposited us on another forestry road. We ignored the signpost-marked car park and turned right and followed the forest road. 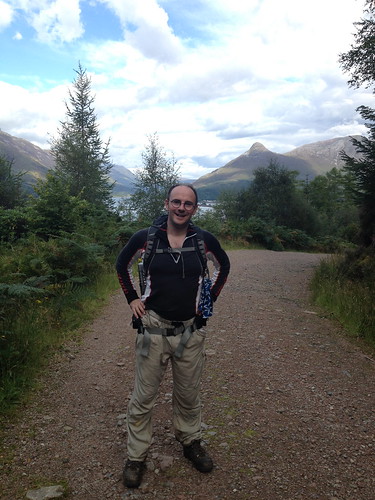 Nearly back at the car

This road seemed to go on forever and there was a nagging feeling that just round the next corner we’d hit a dead end and have to retrace our steps. However, after what I’d guess was about 1 ½ miles we eventually came to the A82 where there is a footpath with a cycle track marked on it. At this point we’d run out of drinks, so it was a pleasant relief to find the Co-op at the far end of the tourist information car park was open as we were able to buy a couple of bottles of water.

We decided that heading to Oban for a bag of chips was too great a detour so we headed back along Glen Coe and the road home. We stopped at The Tyndrum Inn for a bite to eat. It was very busy, which was nice, and the food was reasonable.

A great mointain with two nice peaks and really good views. It seems you made a good choice of which hill to climb on the day, Bmg.

Simon - thanks for the comment. Yes, it was a great day out. Since buying a new rain jacket its been dry every time I've headed out on the hills

Bmg99 wrote: Since buying a new rain jacket its been dry every time I've headed out on the hills

Better that than the other way round!!