Cloud was low on the summits as I parked the car just past the farm at Talla Linnfoots. The steep climb up on to Garelet Hill is exactly as the book (SMC guide) describes - 'unrelenting but brutally satisfying'. With ones face so close to the turf, there's plenty of opportunity to note the bright blue harebells and yellow tormentil, also the wood sorrel and woodrush, relics of the woodland that must have previously clothed these slopes.
The summit of Garelet Hill was in thick cloud which lifted briefly to give views east, and then closed in again as I walked south.

Distant Megget Reservoir in sunshine, I'm just below the clouds 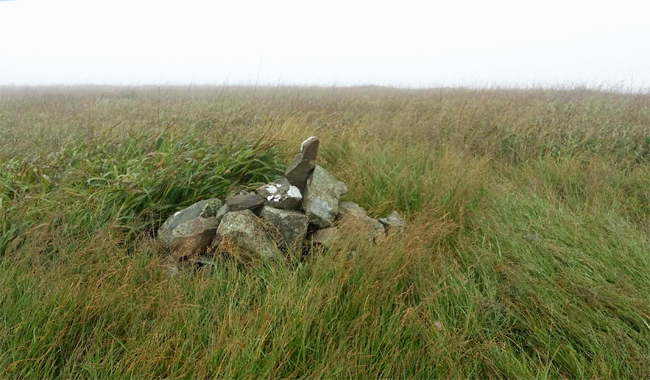 Back in the clouds at the summit of Erie Hill

Leaving the security of the fence line, in thick cloud, I wandered about on the small plateau of Garelet Dod, trying to decide which point was the highest. Eventually, rather disorientated, I 'rescued' myself with map and GPS to return to the fence - although very close, I just couldn't see it in the cloud!
Now, at last, dropping down towards the col, I was below cloud level, with views west towards Ellers Cleuch Rig (impressive) and east towards Gameshope Loch. The walk over Din Law and on to Cape Law was uneventful, and I had time to rethink my route back to the car. Who left their socks on the fence at Cape Law? If there's a barn, surely there's an ATV track?

When I planned the walk, I had checked the 1:25 000 map and Google Earth for tracks down the upper section of Games Hope Burn - no sign of anything - but now, looking down into the valley, I convinced myself that a 'line' I could see crossing the hillside behind the red barn and sheepfold (NT 135164 ) was 'probably' an ATV track, so instead of contouring round the west side of the valley as planned, I walked over Loch Hill, down to the barn and crossed the stream to head for the ATV track.
Wrong. The line turned out to be an old drainage ditch. Now followed about 3 km of totally trackless, often tussocky, almost always wet ground. At least this route gave me the opportunity to check out the bridges marked on the 1:25 000 map. They're long gone, but there were new stakes on each bank at the site of the former bridge just upstream of the bothy, so maybe there are plans to reinstate that bridge.
From opposite the bothy, the paved track (well, mostly) back to the car was welcome. Constructed around 1900 for the quarries on Carlavin Hill (stone had been taken for the dam at Talla Reservoir), the track gently drops back to the road. Now in bright sunshine, small white or dark velvet brown butterflies danced alongside. At the road, there's some new fencing and a padlocked gate, but at present, easy to walk around. Maybe there'll soon be a new stile here - and a new bridge upstream.