This easy pair of Grahams does not yet have WH walk description, but they are worth considering as a good, shorter day out despite their round, uninspiring shapes and boggy slopes. Views, especially from Carn Breac, are second to none, and it's worth saving this duo for a sunny day.
We originally planned Sgurr na Feartaig and Beinn Tharsuinn circuit, but as we drove past Achnasheen, we noticed that River Bran was full to bursting, so it would be the same for Allt a'Chonais and crossing this river on the way up Sgurr na Feartaig could be tricky (there is no bridge). Apart from that, winds were very strong, gusts possibly 50-60mph. Forecast suggested that conditions should improve in the afternoon, but after a short debate in the car, we decided to leave the Corbetts for a quieter day. The two Grahams across the road seemed an easier option with no river crossing involved.
SMC Guide to Grahams suggests parking on the side of the access road to Loan, but as we arrived, there was quite a lot of traffic at the entrance of the glen (I'd call it Glen Crubaidh from the stream, Allt Coire Crubaidh). A new hydro scheme is currently under construction and as it was a Monday and work was ongoing, we didn't want to disturb the workers and parked a little further back, at 095531, by the entrance to the forestry plantation. I remembered from other WH reports that it is possible to climb straight up Beinn na Feusaige from this point through the forest, so that's what we decided to do. We hoped to do the full circuit over the two Grahams, descending via Coille Bhan and thus avoiding the walk through Glen Crubaidh altogether.
So this is our route:

Track_BEINNN NA FEUSAIGE 08-08-10.gpx Open full screen  NB: Walkhighlands is not responsible for the accuracy of gpx files in users posts
It rained as we prepared to climb and we had to start the ascent wrapped up in waterproofs, thankfully the shower stopped soon.
Black Arrow parked at the entrance to the forest: We followed a fire break steeply uphill, until we came across a fence... We looked around, but there was no gate, no stile, no ladder of any kind, so we had to go fence scrambling once again

The fence looked a bit wobbly and we had to walk alongside for a short distance, until we found a larger, more sturdy looking fencepost. Even then, it was a tricky maneuver. We had to take our rucksacks off and Kevin got over first, balancing on the wobbly wires like an olympic gymnast on the bar

I passed him our packs and poles, then scrambled over myself, luckily managed without tearing my trousers or falling nose-first onto the wet ground

Not a welcomed obstacle:

From the fence, it's still about 250m of steep ascent, on wet grass first, but soon the slopes become more heathery, with scattered rocks, easier to tackle.
Overdressed for summer: Glen Carron from above, with the hydro scheme site visible at the entrance to the smaller glen: As we climbed, we enjoyed a sunnier moment with blue skies above, but note the acute angle of the slope! It didn't take us long to reach the flat summit area of Beinn na Feusaige, but as soon as we walked out of the protection of the slope, we were immediately hit by high winds, like by a wing of a giant bird. Bang! I almost fell on my backside. Gusts were horrendous, not cold but so strong we could just about move forward. Only a little bit stronger and we would have been forced to abandon the traverse!
Strathconnon Corbetts from near the top of Beinn na Feusaige:

This Graham has two high points with small cairns, about 300m apart. We touched both cairns as we traversed the hill, but only took photos by the eastern one. We stopped here for a few minutes, to make sure we were prepared for the coming shower. Views were very nice, but we had little time to admire them. I posed with Lucy, making sure she didn't fly away! ), but in that wind we didn't fancy looking for it. We may come back here on a calmer day for more detailed investigations.
Wind filled my overtrousers, making my legs look like overstuffed sausages 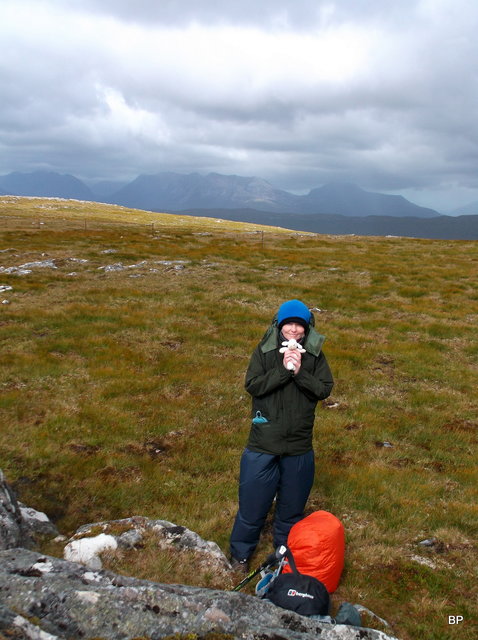 The rain came five minutes later. We walked across the summit area to the second cairn, then continued west, down the slope, towards the col with a large lochan (Lochan Meallan Mhic Iamhar). When the shower passed, we stopped again to remove unnecessary layers and studied the col - which side of the loch looks drier and less peat haggy?

We picked the left hand side and pushed on. The sun came out again and despite some wet, boggy ground, we actually started to enjoy this route. The climb from the col to the middle top, Meallan Mhic Iamhair, presented no problem.
Beinn na Feusaige from the middle top:

So far, the main Torridon panorama has been obscured, but now we saw Liathach, Beinn Eighe and friends in their full glory:

Eighe zoomed. My fav hill was tempting me again. Actually, I fell to this temptation and visited BE last weekend, but that will be a subject for another report:

Carn Breac from Meallan Mhic Iamhair, the second col drops to 435m, but the final ascent is up a nice slope, not too steep and rather dry:

Fionn Bheinn and the Fannichs in the distance:

Sausage legs again, but despite the wind we were having fun As we gained height during the final ascent, a great panorama opened up behind us, back to Beinn na Feusaige and the glen: One would expect good views from any hill in this area, but those from Carn Breac ridge surpassed my expectations. Achnashellach hills looked splendid in afternoon sunshine:

If only it wasn't so windy. When I stopped to take something out of my rucksack, I had to keep hold of every item, or they would all fly away, including the rucksack itself! I had been on the hills ion blowy weather before, but never that bad. Gusts 50 at least, I should say. I was glad we didn't go for the Corbetts, higher up it would be even more windy... At least this ridge was wide and apart from losing bits of equipment, the only danger for us was getting blown into a peat hag. When we reached the summit, we were very glad to find a substantial stone shelter, at least we could sit down to our cuppa tucked away from the gusts. The wind was so noisy we could hardly hear each other

and taking photos in such conditions was quite an exercise... half of our pics came out blurred due to camera shake. We didn't take a tripod, I doubt whether it would withstand the gusts anyway 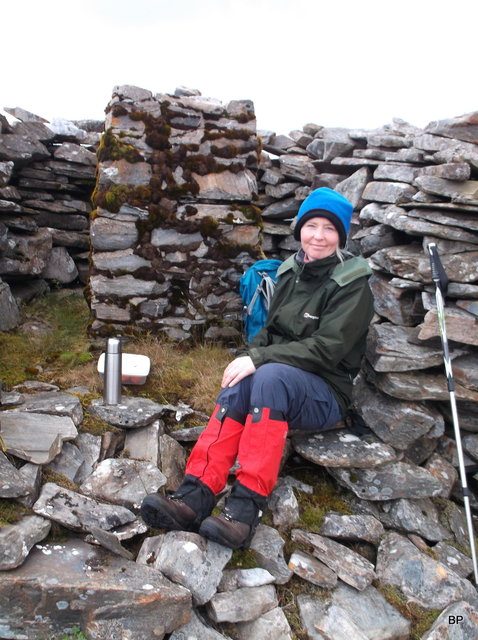 Putting the wind aside, it was a place with stunning views, much batter than Beinn na Feusage. Especially the northern pano to Loch Coulin and the Torridons was breathtaking. Me and Beinn Eighe: 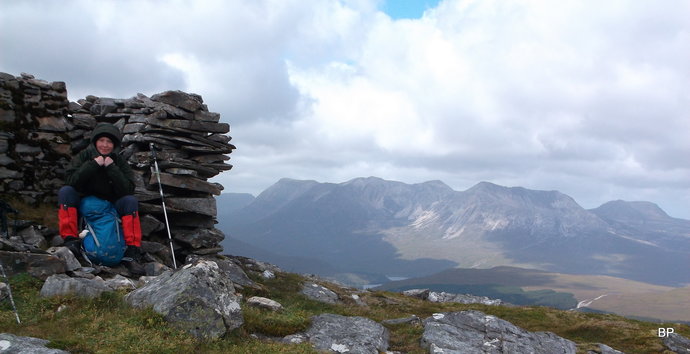 We agreed that Carn Breac was a hill to return to in full winter conditions! And possibly on a quieter day, so we could spend more time snapping pictures in this remarkable location. Just a wee Graham, but so much joy.
The Graham Guide suggests descending into Glen Crubaidh but we opted for a full circuit over Coille Bhan. We followed the curving ridge, past some wee lochans. We had to negotiate some peat hags and boggy terrain, but nothing nasty. There are a couple of fences cutting across the ridge: the first one has a gate at 069524, the second one is only about 1m high, easy to jump over.
The final descent is steeper, but mostly grassy, relatively easy terrain. And at last we were off the wind, though I still looked a bit ruffled Lovely views down to Loch Sgamhain on the way down: Beinn na Feusaige across the glen: ............
Summing up: a good pair of Grahams, for both summer and winter time, shame about the wind but I still think we did pretty well in given conditions.
The day after we made a wild attempt at one very iconic Corbett... TR to come soon.