For anyone who's ever got lost, read the map wrong, or simple got yourself confused on the hills, this one's for you.

In my short & humble walking career, I've not really gone too far wrong. That was until I pulled off this little nugget of stupidity. I guess we've all gotta get it wrong sometimes. I just thought I'd make my first faux pas a big one.

Enjoy, feel free to mock (within reason), and take comfort that it was someone else who dropped a clanger for a change.

I was visiting my parents in Glasgow with Chase; Jessica & Hunter had stayed home in York this weekend. I had the Monday off, so decided to get a couple of hills in on the Sunday while Chase ran Grannie & Grampa ragged. This was going to be a timed walk against the train timetable, so Chase wasn't joining me on this one. Being stranded in Crianlarich (if we missed the last train back to Glasgow) was not an appealing prospect.

I set off for Crianlarich, from Buchanan St. Bus Station (Glasgow) at 1000 Sunday morning. My £15 ticket would let me get a nice kip on-route, dropping me off at the of the Crianlarich Hotel at 1140. Train back to Glasgow was at 1930 so I had just under 8 hours to bag my intended hills (BEN MORE & STOB BINNEIN)

Arrived in Crianlarich as scheduled, and decided to stop in at the station cafe for a quick cup of tea before setting off in earnest. Working for Network Rail, I thought it'd be nice to see how the station building was being used in a positive way, as opposed to the mess so many have been allowed to become. (Not a bad cup of tea, and the Scotch Pie & Beans was pretty tasty too)

Sitting, as I was, I went through my planned route one last time. I had read, re-read, and re-read again, the route I was taking over the previous week. It had sounded like a tough, but pretty straight shot. I knew where I was going and what to expect.

So, off I set at 1200, out of the station, along the road, keeping an eye out for the track opposite Ben More farm, leading up Glen More. Sure enough, after a couple of miles, there was "a" Landover tack, twisting round a boggy field, passing under the railway and then heading off into the distance with some pretty big hills on either side. That'll do for me...

15 minutes later, I had reached the end of the Landover track but found myself somewhat confused. 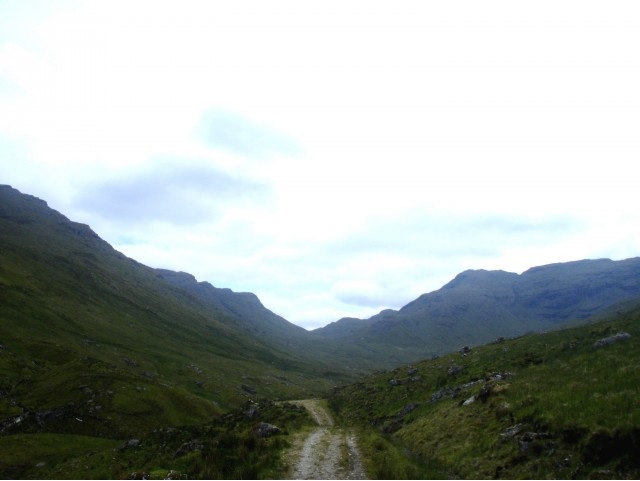 01. The end of the Landrover track on the wrong side of Grey Height.

For those not familiar with the area surrounding Crianlarich, there are 2 roads which intersect at a T-Junction beside the Crianlarich Hotel and the Train Station.

Guess which road I had taken?????
That's right, not the correct one.
"PLANK!"

It took me a few minutes to clear my head and work out exactly where I had landed myself. Wasn't easy when I was still trying to work out how I had managed to be so stupid.

Eventually worked out that I could still get a couple of Munros in, and set my targets on Beinn Tulaichean & Cruach Ardrain.

From where I was, I decided to continue in the same direction and to head towards Coire Earb and Stob Glas beyond. I decided to head for the highest point to give myself a clearer picture of how to best bag these new targets. The climb (it was literally a climb- hands and knees at times) was steep and tiring and my walking poles had to be dropped to their shortest length, so I could use them to help me to the top of Stob Glas.
From the top of Stob Glas, I could now see the bealach between Beinn Tulaichean & Cruach Ardrain. 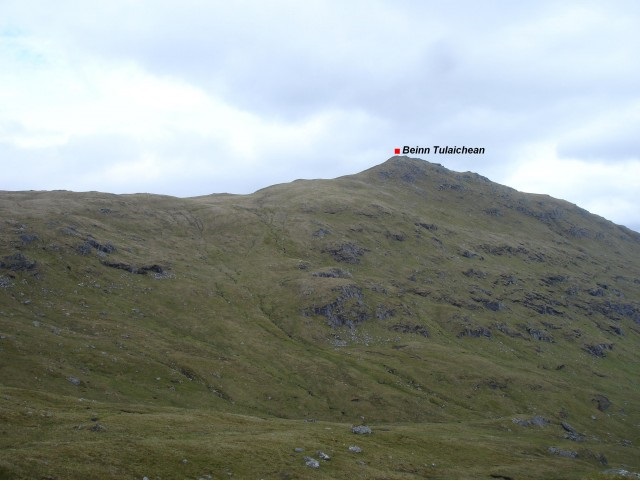 I headed for the 3midpoint between the two, picking up the now obvious path to the summit of Beinn Tulaichean.
Arriving there at 1540, I checked out the return route to pick off Cruach Ardrain before sitting down for a spot of lunch. 04. Stob Glas & Cruach Ardrain from the summit of Beinn Tulaichean. 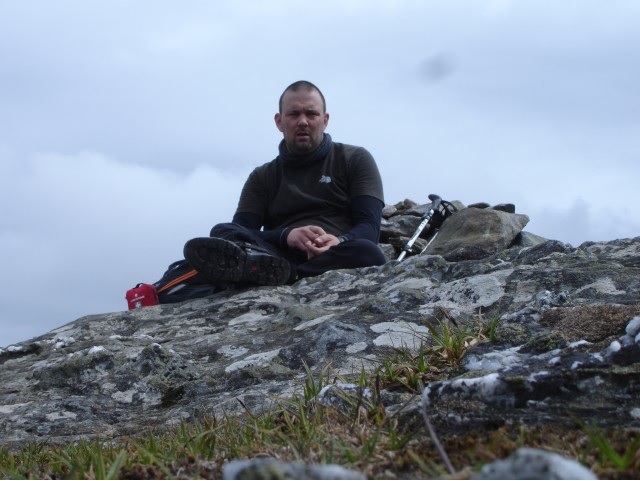 10 minutes later, I was off again, heading for my second "2nd Target" for the day. The path between the two hills was easy to follow and with clear visibility, I was pretty comfortable that I could make it to this next Munro without ending up lost again.

I'm happy to say that I managed to do so and arrived at the summit of Cruach Ardrain at 1630, having stopped at the SW Top to take a couple of pictures. 08. Cruach Ardrain summit from just below the SW Top (Stob Binnein mocking me, in the background). Another short rest at the summit of Ardrain and I decided to head straight over the top of the summit and down the NE side of the hill. I set off at 1640.

This left me with a walk out below Stob Garbh to my right, heading for the forest line beneath Grey Height directly in front of me. This was a wet and boggy walk out, but I has happier now that I had another 2 Munro bagged, albeit not the one's I had planned on doing when I had first set off. We live and learn. Once I reached the forest line, I followed it up and round beneath the front of Grey Height, picking up the more regular route that comes up through the forest.

Not wanting to tempt fate twice, I decided to leave the route over the stile and back down through the forest. I was sticking with what I knew and descended back down to the Landover track I had ill-fatedly followed earlier in the day. This took me back down the side of the River Falloch and putting me back on the (never to be confused again) A82. I arrived here at approx. 1830.

I made it back to the train station for 1900, leaving me 30 minutes to re-cap on a very eventful & enjoyable day. I was still kicking myself for making such a ridiculous mistake with my first step, but happy enough that I had manage to re-focus and still bag 2 more hills.

Train journey home lasted all of 5 minutes for me, I was asleep before the train left Crianlarich.


Official times are as follows:

Never mind - in my view CA and BT are more interesting than BM and SB (not least because of those unusual black and red line on them....)