By the time I left my relatives on North Uist, it was a bit later than I had intended. I drove round to Loch Sgiopoirt in light rain, and while I pulled up and sorted my overnight stuff out, the cloud had lifted right off Hecla.

Hecla from the end of the Loch Sgiopoirt road: 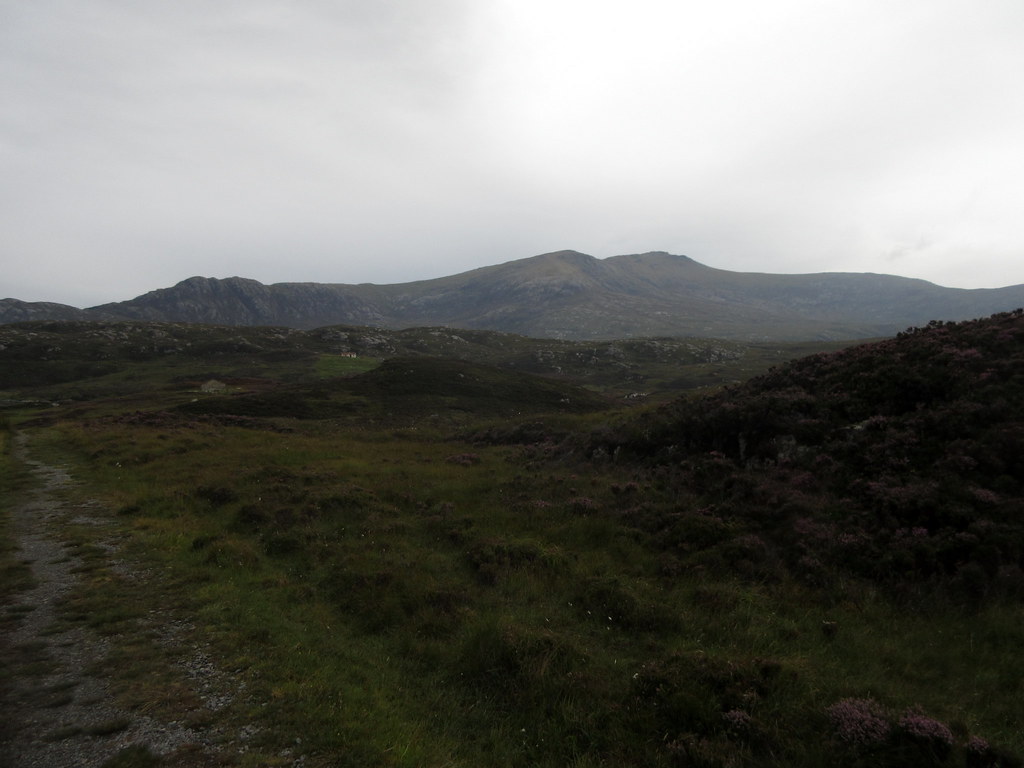 I was in a bit of a quandary. I was definitely heading for Uisinis bothy tonight, but I couldn't decide whether to go over Hecla. On one hand it was clear, but on the other, I didn't start walking until 6pm, and I was mindful of how gusty the wind had been even at low levels earlier. I started along the good path along the shores of Loch Sgiopoirt, but soon left it to gain a bit of height. I was still thinking of going over Hecla, but I changed my mind in the end. There was still the odd drop of rain and no sunshine, and the way over to the higher ground looked rough and lumpy. 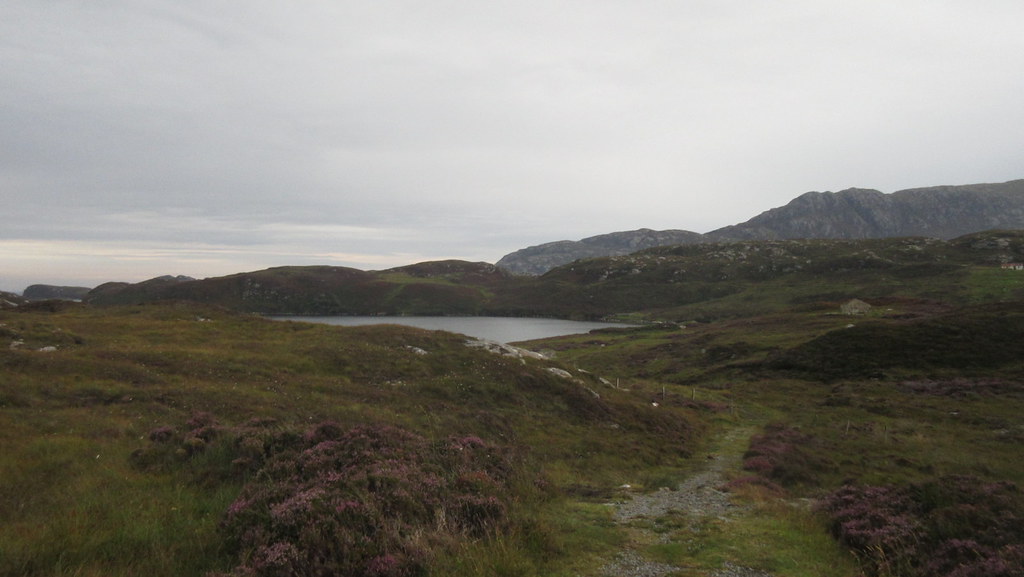 I decided to walk into the bothy around the coast, which I also knew was rough, but should be quicker. I quite fancied having dinner before it got too late.

Everyone loves a pointless gate: 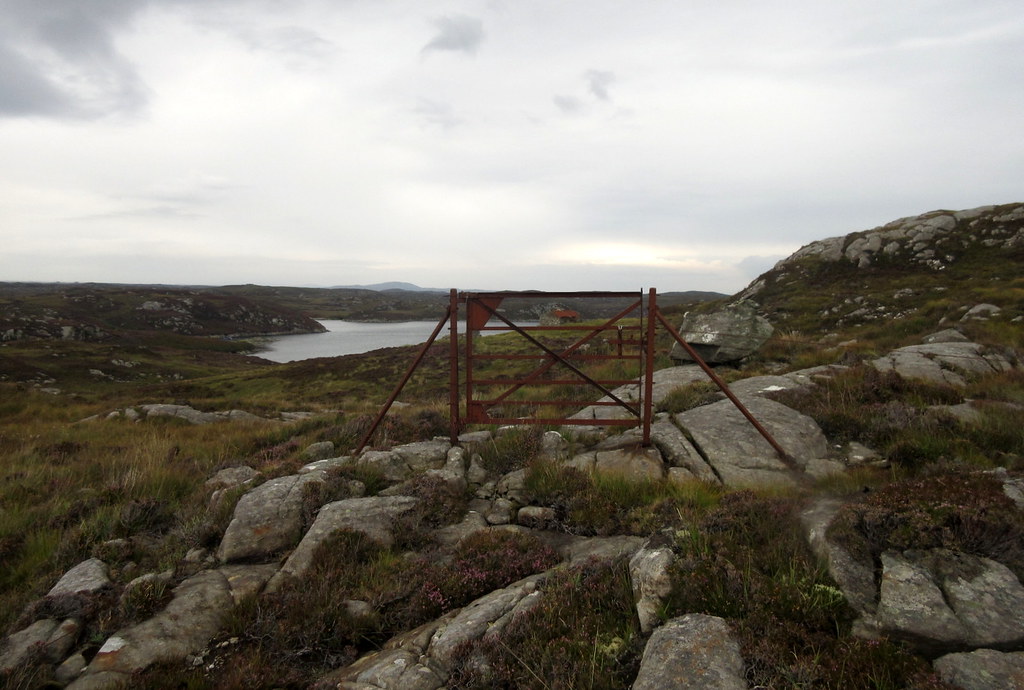 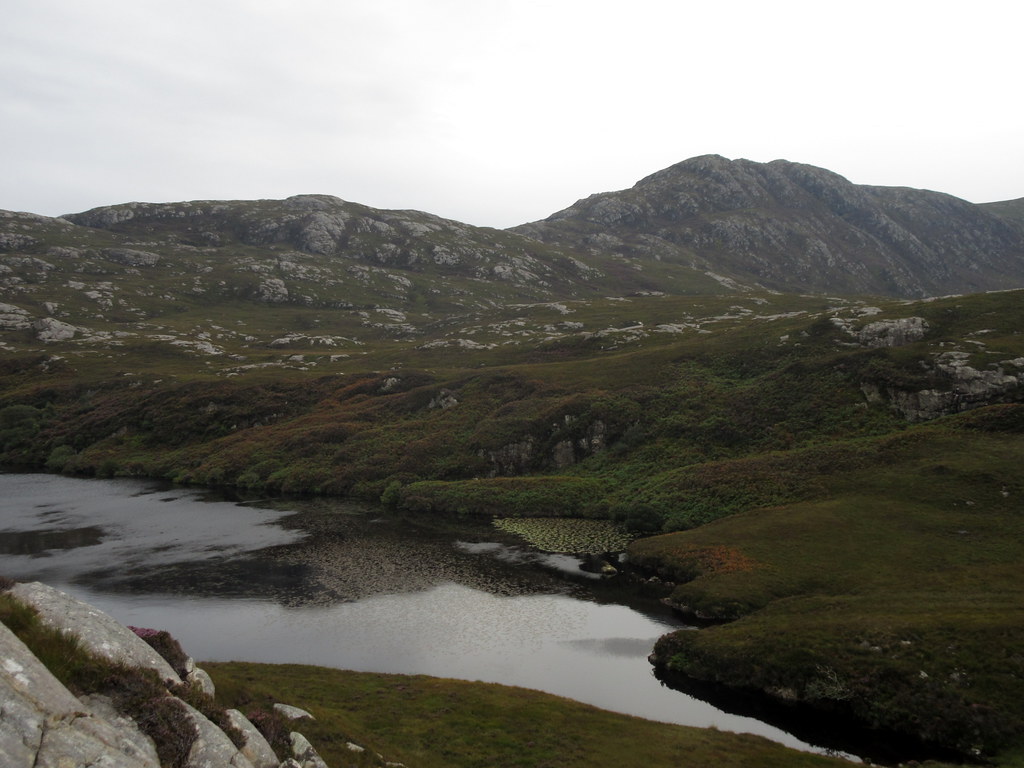 There are various ATV tracks heading to the bothy once the good path ends, but they are mostly wet and muddy, so I decided that making my own way would be preferable. If I reached the east end of Loch Bein, I could cut over slightly higher ground north of Maol Martaig and gradually drop down to the barn at Molauath. 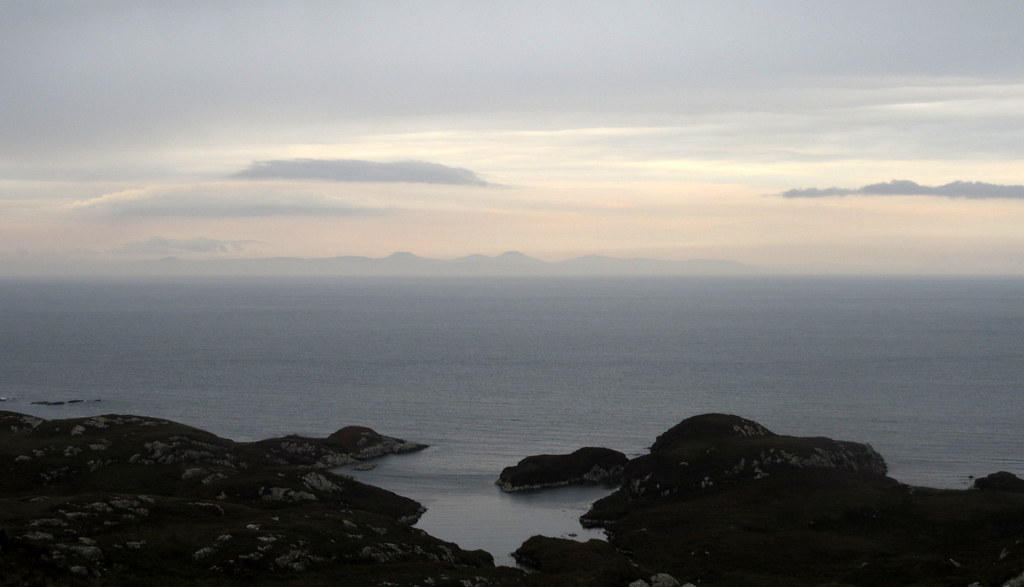 It was heathery going generally, but once I crossed over the ridge of Maol Martaig, it became particularly tough, with lots of burns in steep little gorges to cross. 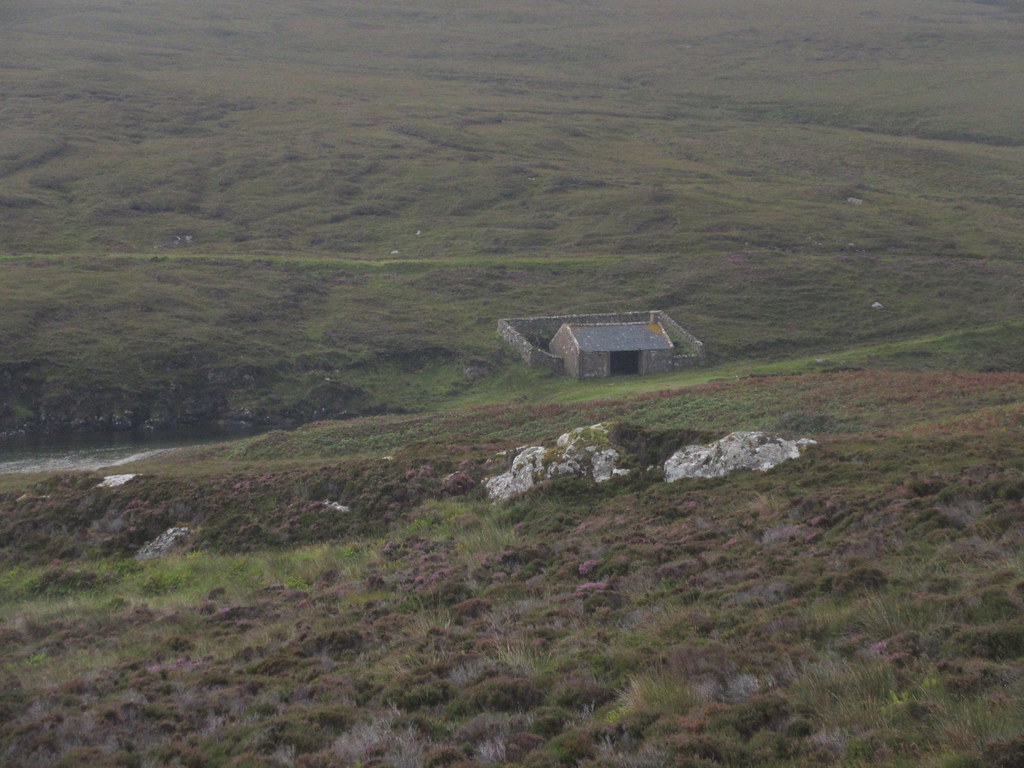 After I passed the ruin of Glacklee, the way was a little smoother, but the heather still deep. I picked up some faint tracks which led me to the bothy. My worries about the wind had been misplaced; it had eased off a lot over the last hour and instead was perfect midge weather - warm, humid, grey. Shame, as I would have liked to explore the beach (and the lighthouse and hill of Beinn Ghot as well, given more time). Instead, it was a quick dive into the bothy to demidgify. The walk from the car took almost exactly 2 hours. 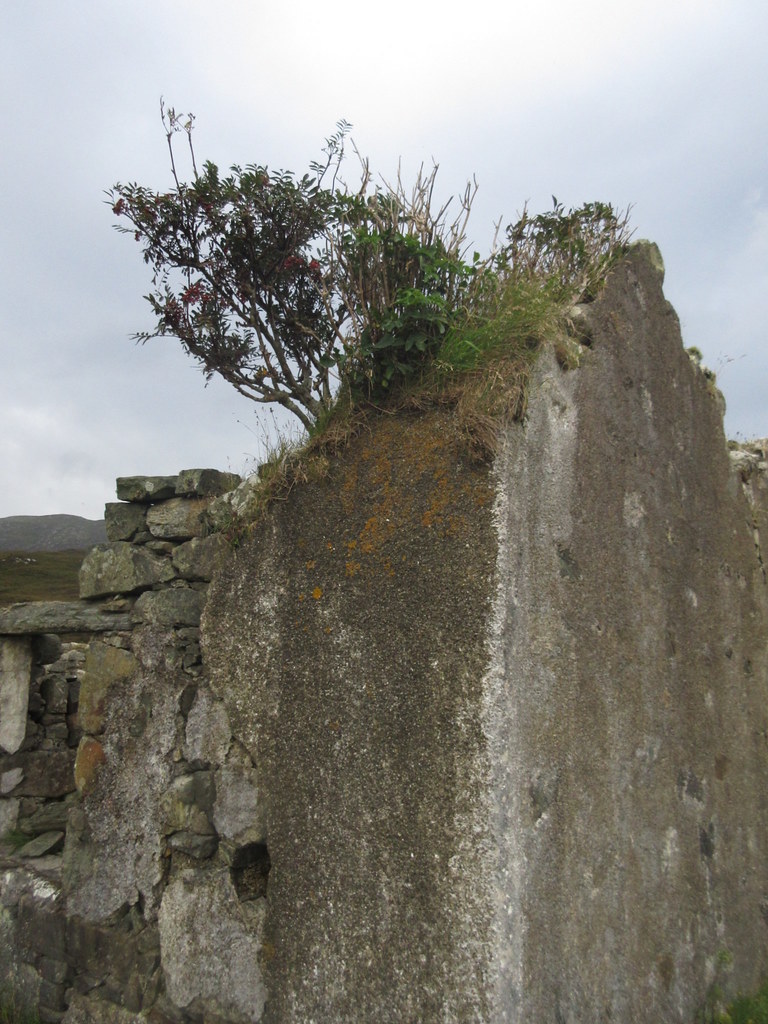 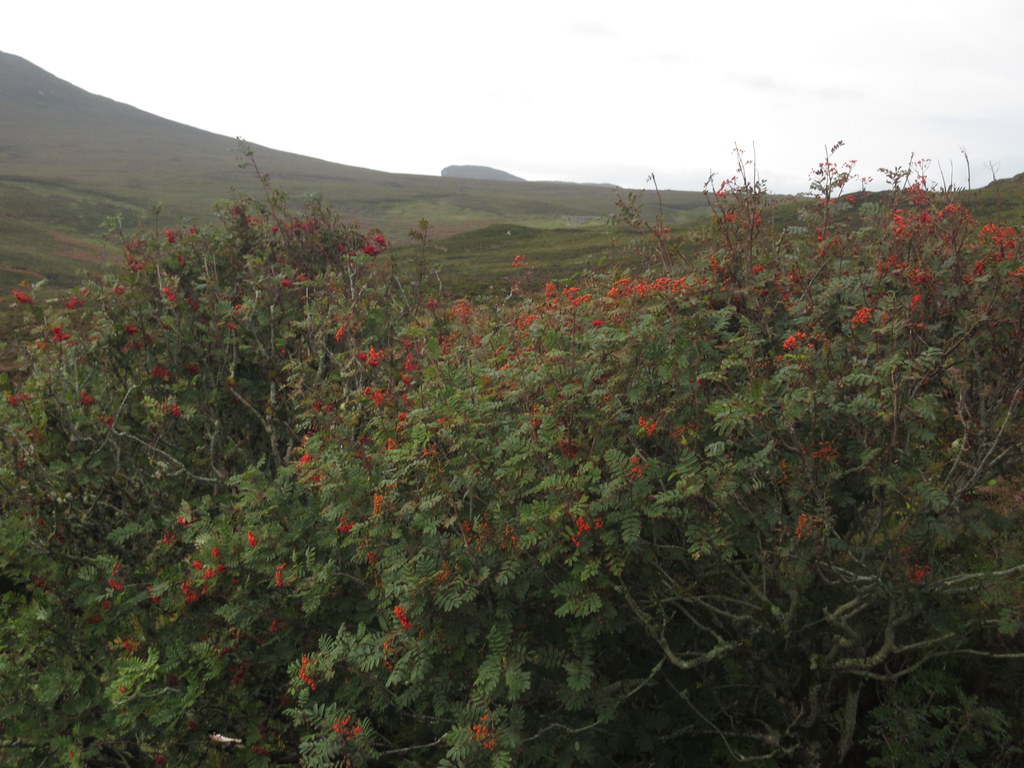 Stag on the beach: 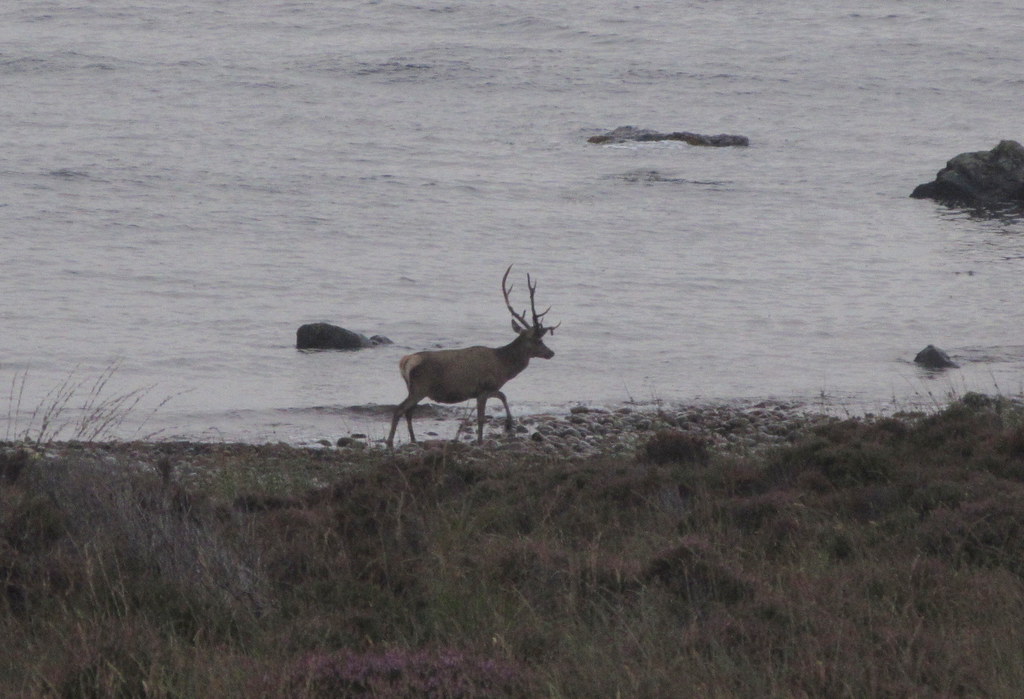 Uisinis Bothy, outside and in: 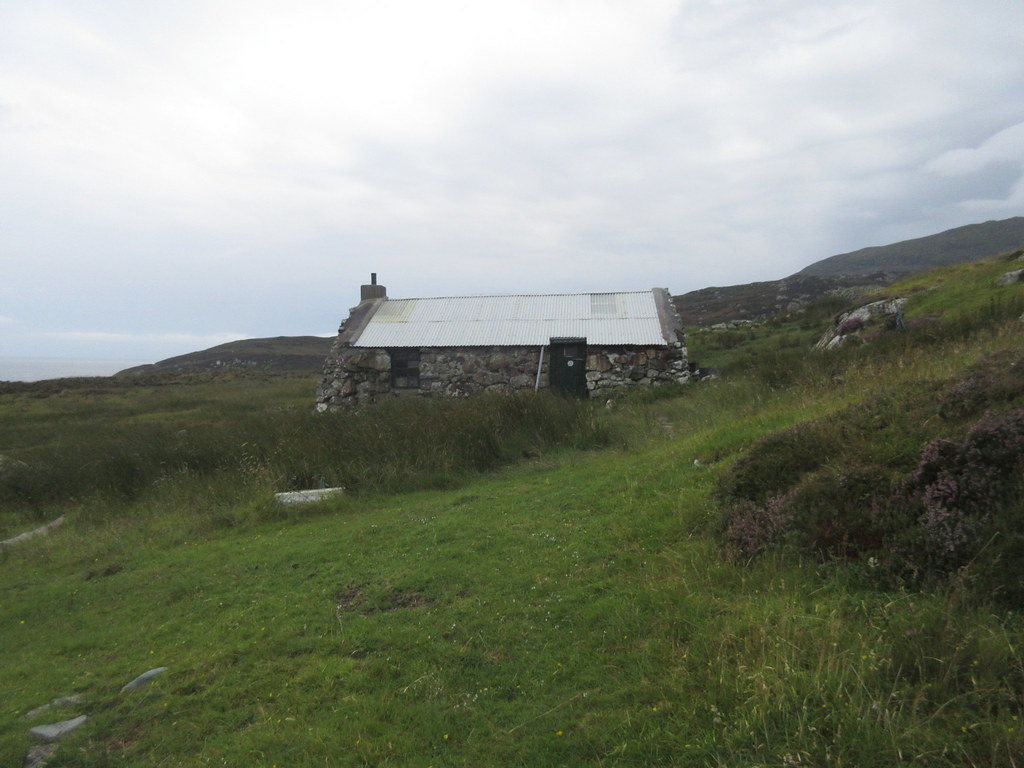 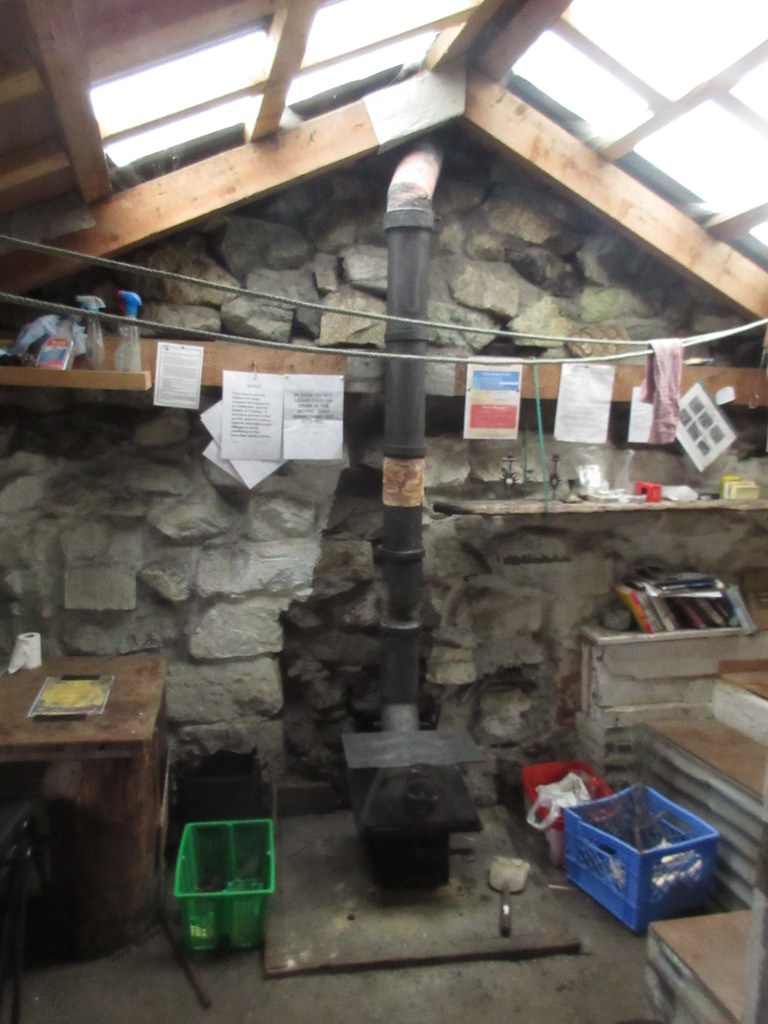 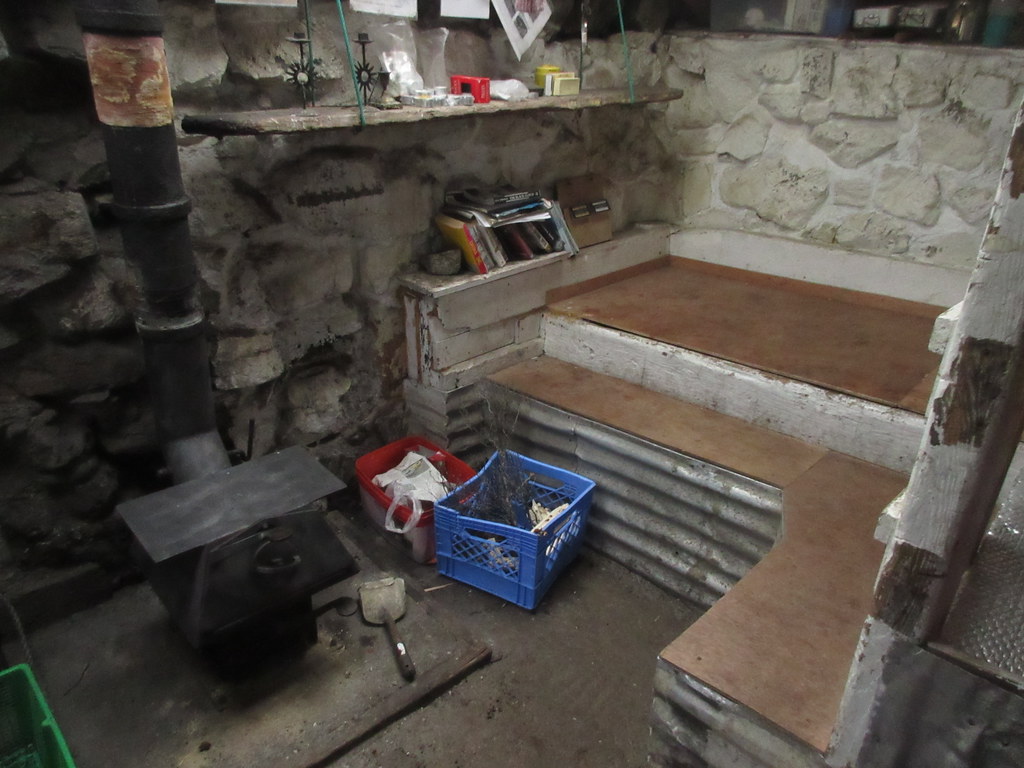 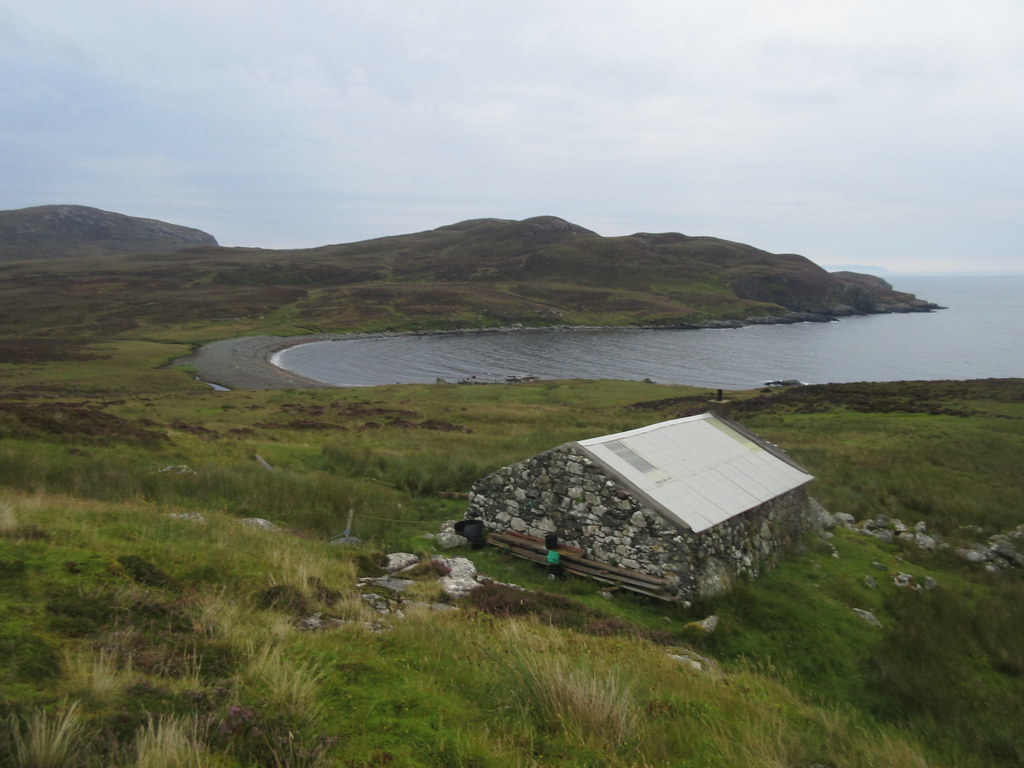 While appearing quite rough and ready, the bothy was actually very comfortable and well equipped. It was interestingly built on a bit of a slant, with everything sloping down towards the stove. While the bothy book (and Greg and Mairi, who had visited recently) mentioned rats and the need to re-set the rat trap if it was full, I had a peaceful night with no rat company. 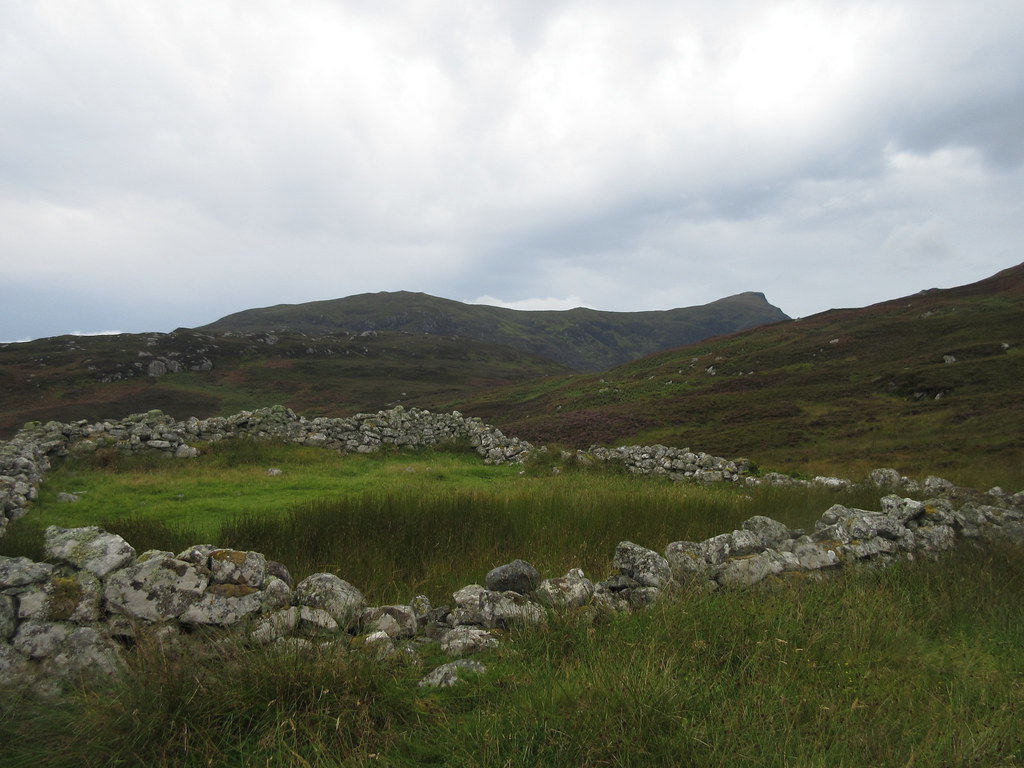 Black Cuillin behind the Uisinis peninsula: 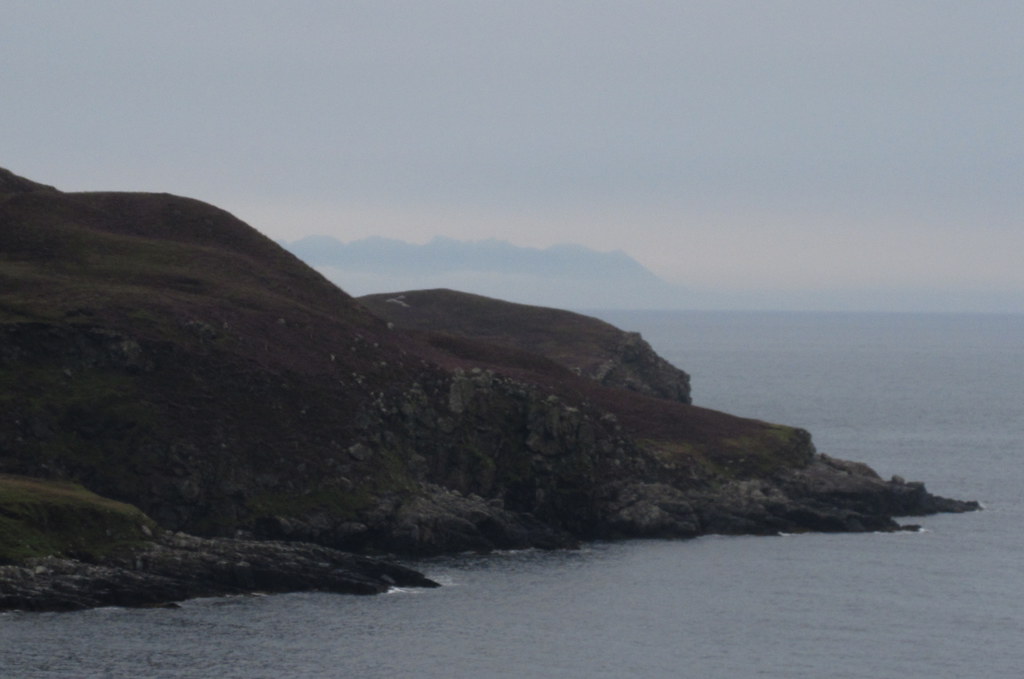 Unfortunately, the reality of work sent me for an early night. I was supposed to be on site in Balivanich at 11am the next day, and when I worked the times backwards, it meant to be on the safe side, I would really need to be up at 5am. Boo!

Luckily I got a good sleep, and was packed up and on my way by 6am the next morning. I had decided after the roughness of the walk-in, I would prefer to go back over the summit of Hecla regardless of the weather. I was actually in a reasonable spot for the weather - it was uninspiringly grey, but the hills to the south, (including Beinn Mhor at over 600m) were clear. There was an impressive bank of cloud rolling down the slopes of Hecla which suggested that things might not be as nice to the north.

It was tedious to walk through, but nice to look at: 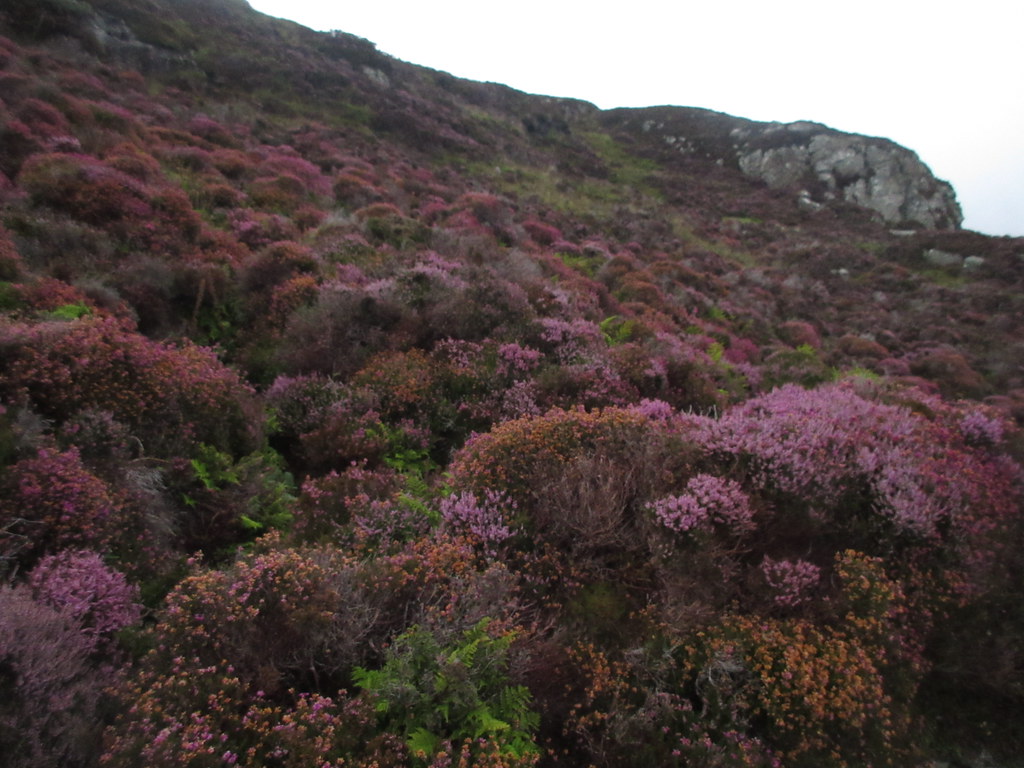 It was a relief to get above Maolach na h-Uamha as the heather thinned out here and the walking became easy. I was soon in the rolling cloud, with nothing else to see on my way up to the NE top of Hecla. 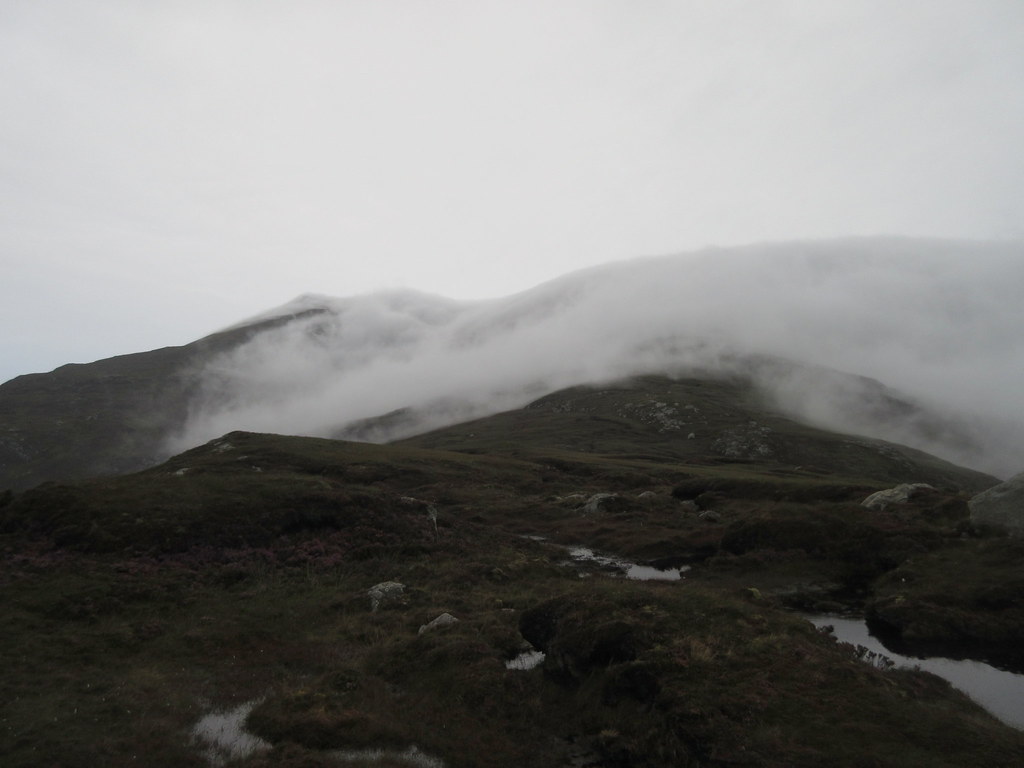 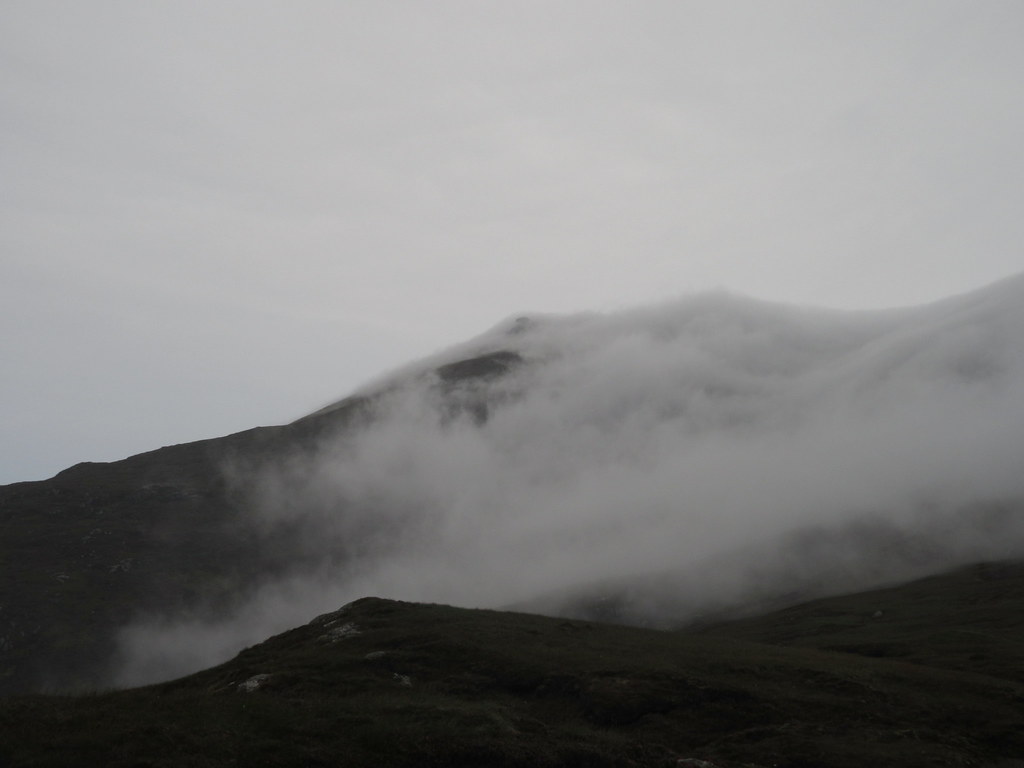 Out into the Little Minch, with South Uist stretching away south: 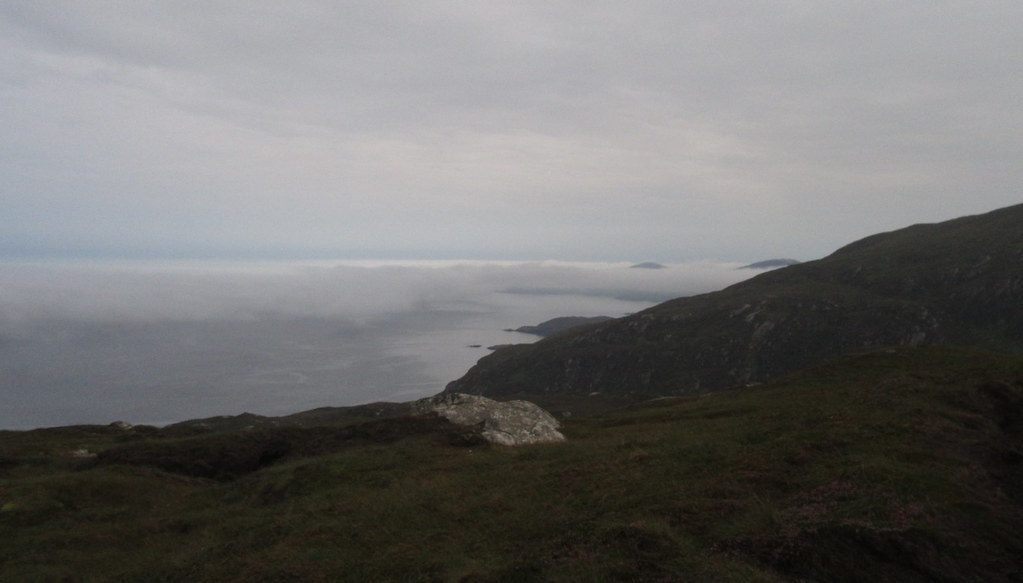 Some entertainment on the way up: 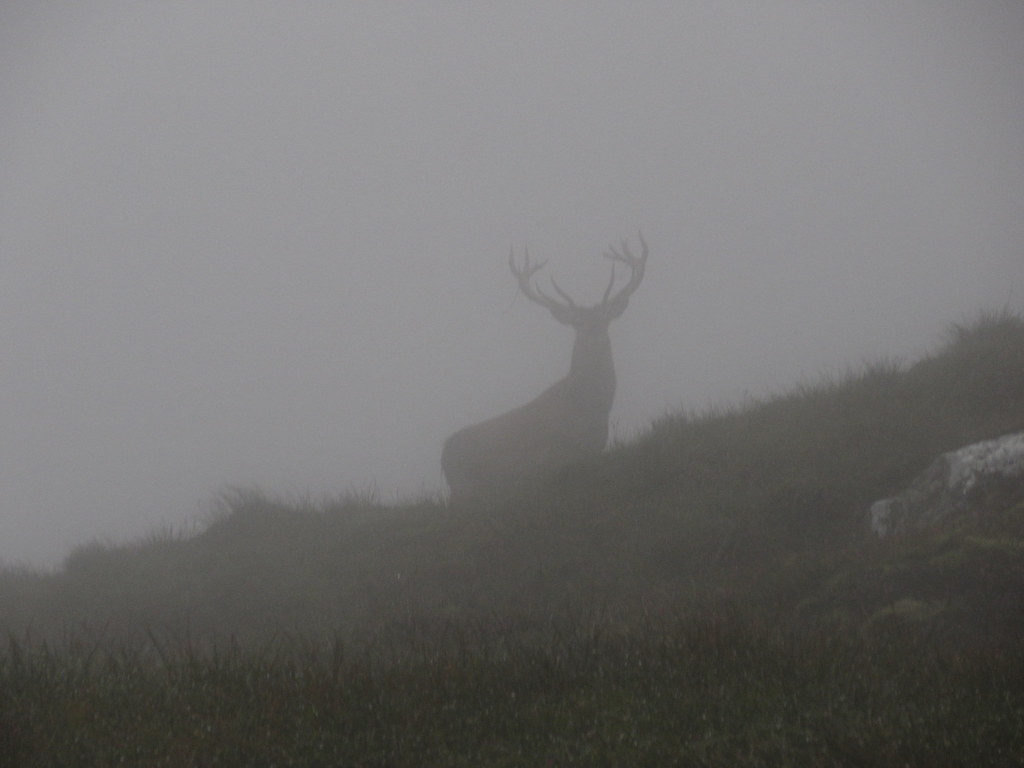 Sadly there were no breaks in the cloud on the summit. So far the only 600m+ summit I've had a view from on the Western Isles is Beinn Mhor (which was probably still clear now, annoyingly). Still, it looked like it was probably a good place to admire the scenery from on a better day, so I'm sure I'll be back. 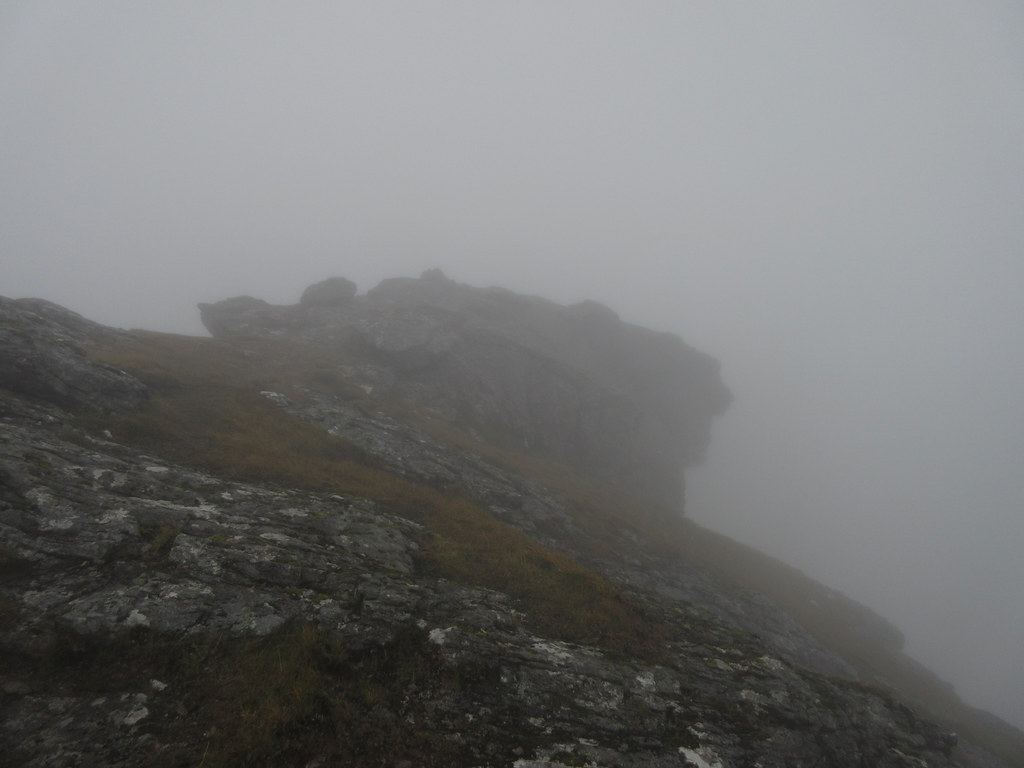 The broad NW ridge provided an easy descent route. Eventually I dropped off it to reach the tiny Loch a' Choire. The going seemed easy - far too easy actually. I dragged out the compass to work out what I had done. Once it had stopped spinning and I had remembered that it has been remagnetized to point 180 degrees in the wrong direction, I could see I had drifted too far south before trying to leave the ridge. I thought I'd have to go back up a bit, but a short contour rightwards and I was descending much steeper ground into...somewhere. Even down at 200m, the cloud was too thick to see much.

On the floor of the corrie, I started wondering where I was again, as I hadn't seen the loch. Then I nearly walked into it!

I'm sure there should be a lochan round about...ah: 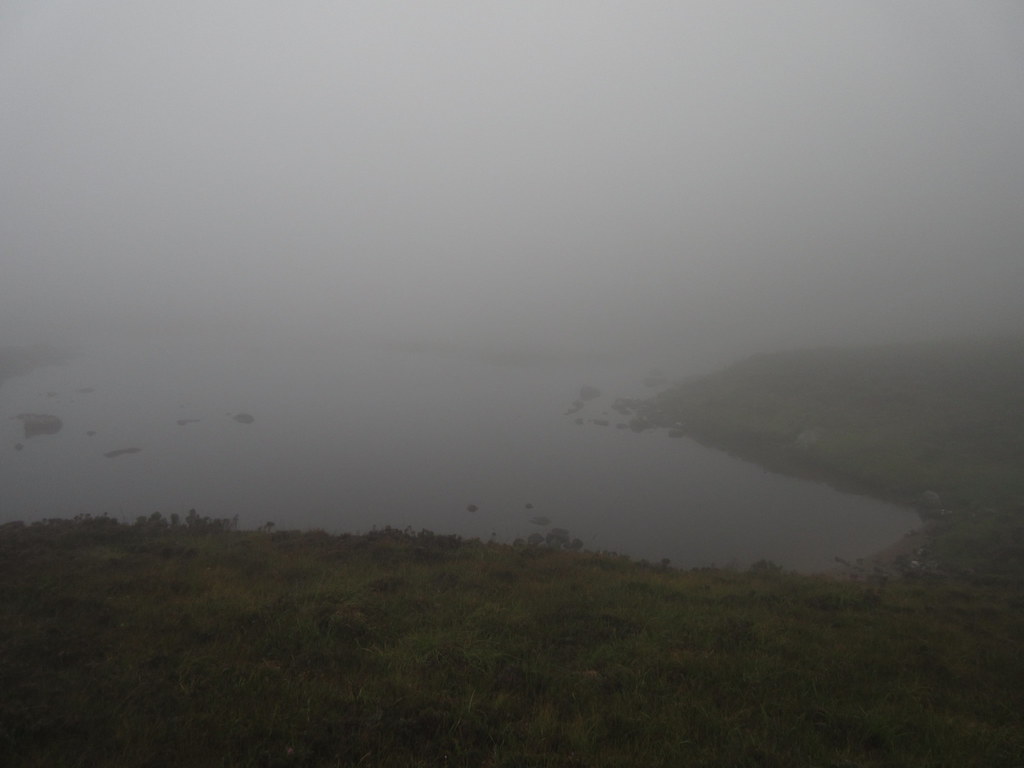 Navigation was now easy as I followed the burn downhill. Just a low-lying area to cross before hitting the path again now.

Waterfalls and gorge on the Allt Mille nan Con: 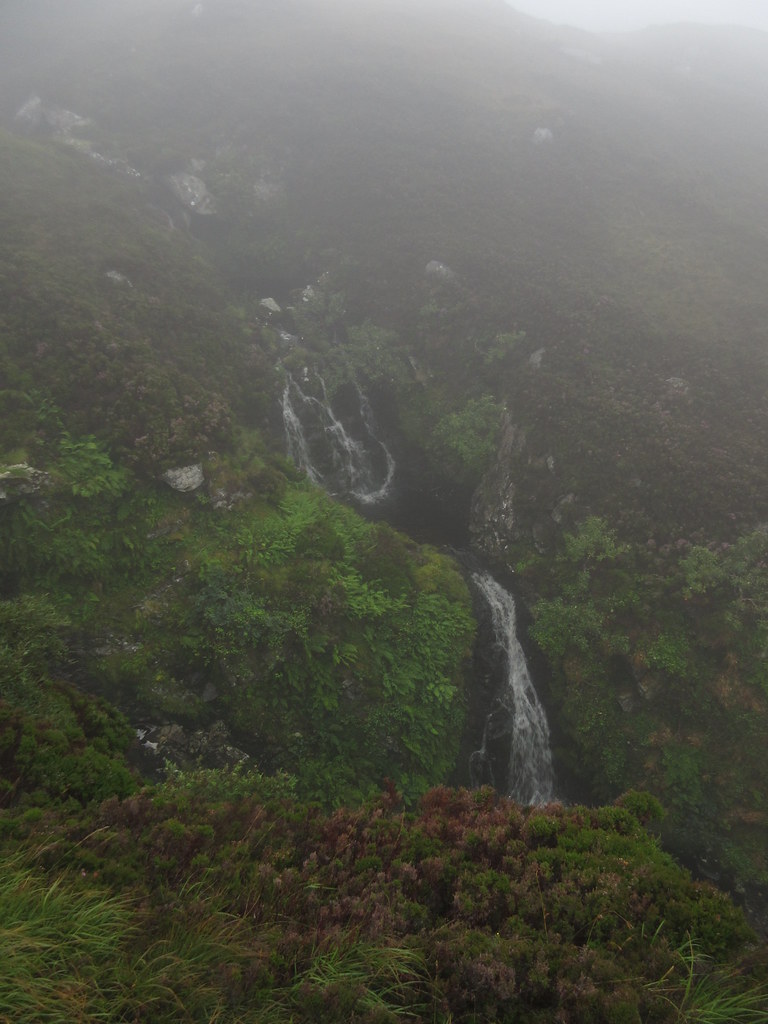 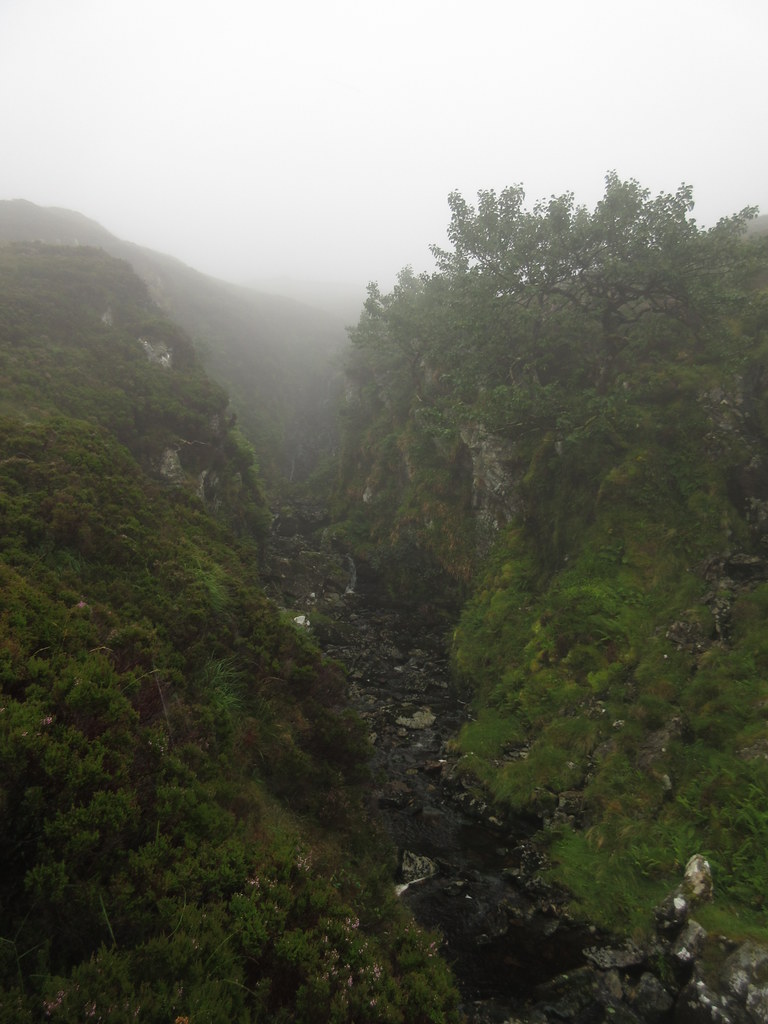 Low lying, but not flat, of course. There were some interesting lochans with tiny islands in to walk past, before I ended up back on the short section of good path around Loch Sgiopoirt. The cloud level must have been at around 120m.

A splash of colour: 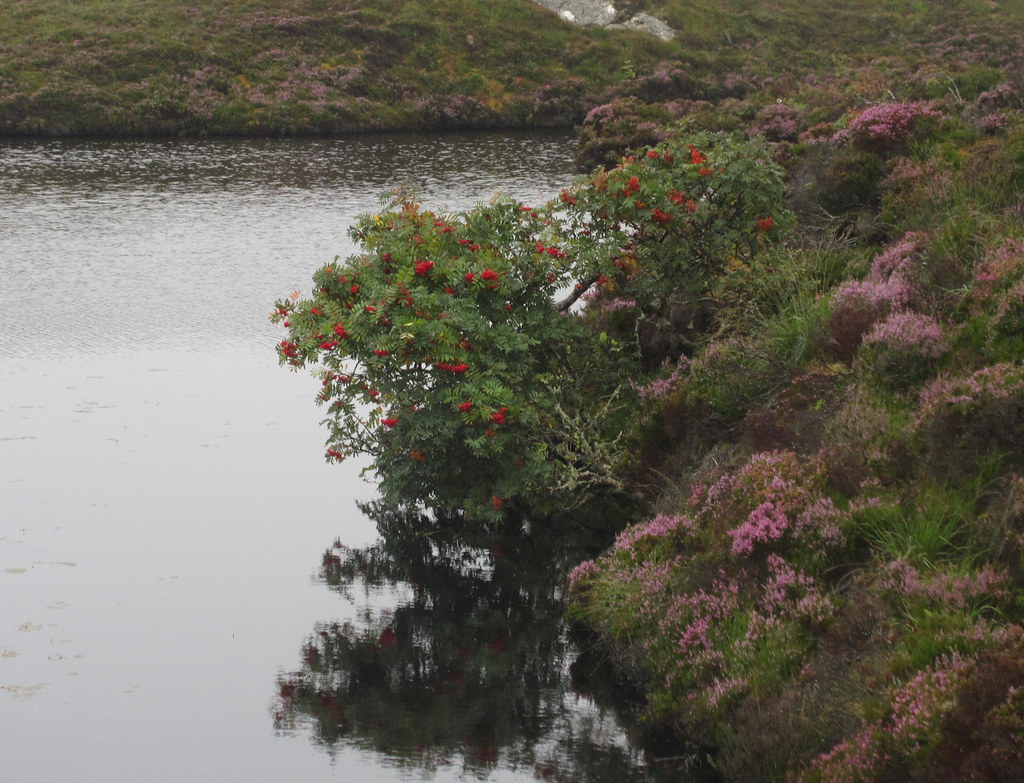 I reached the car before 9:30am - a slightly odd way to start the working day! I probably had time to find a shower in the leisure centre at Balivanich, but since the meeting was on a sewage works, I didn't waste my time, heading t the airport café for some much needed coffee instead.

Cloud low enough to cover the tops of these turbines (which have bases about 20m above sea level): 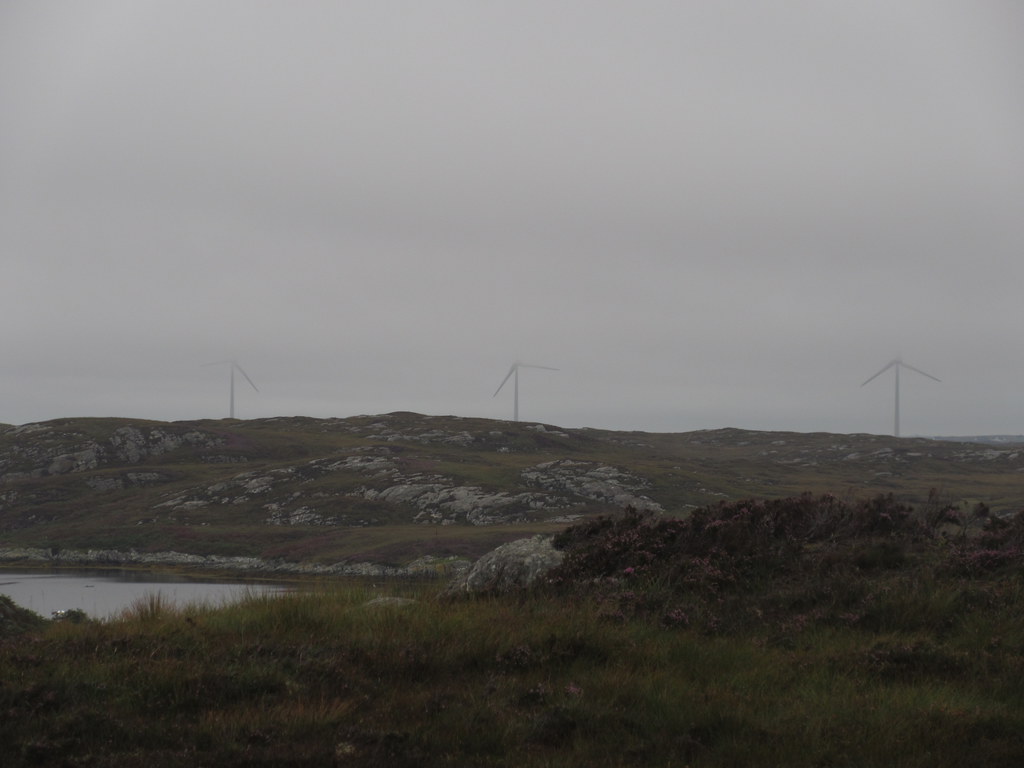 Typically the weather cleared up a bit through the day and the sun even came out. After my meeting I took a drive around the west side of North Uist before joining the ferry queue in Lochmaddy. I must have been on too many ferries this year as the novelty of spending most of the trip outside is wearing off. Instead I got a nap in preparation for the drive home.

Back into Uig and things are brightening up: 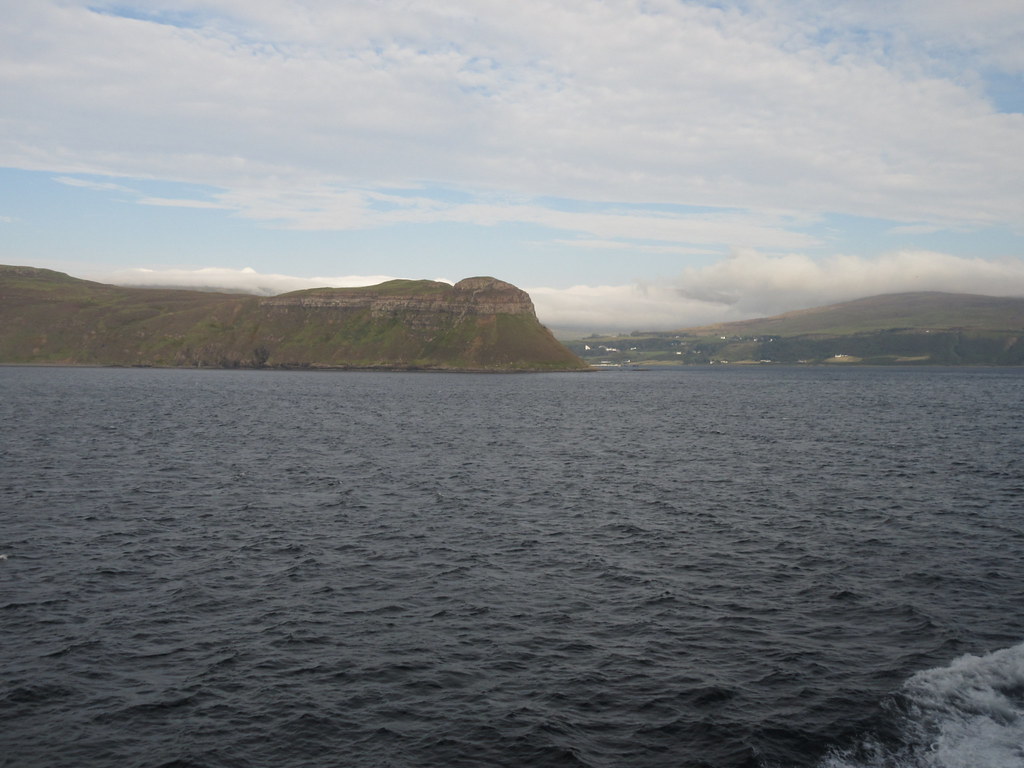 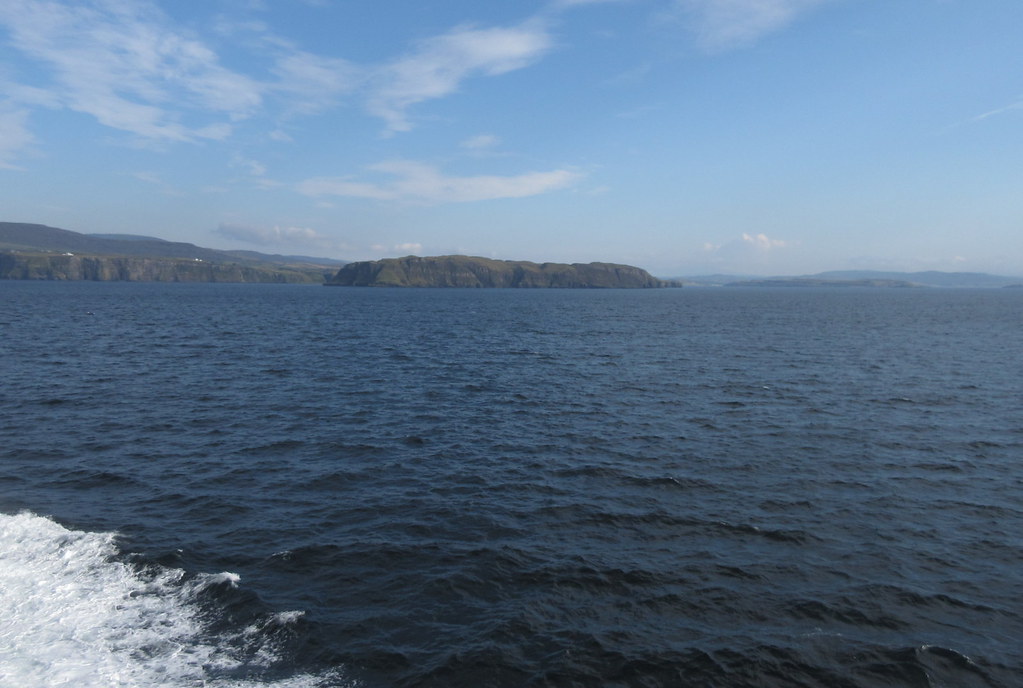 The sun was out on parts of Skye (although thick drifting cloud kept appearing any time I thought about stopping for a walk). I remembered how tedious the slow precession of ferry traffic south had been the previous month and headed over the Quiraing road instead. I couldn't believe how busy Skye was on a weekday evening at 7pm - it was almost as heaving as the Lake District!

A detour past the Quiraing on the way home: 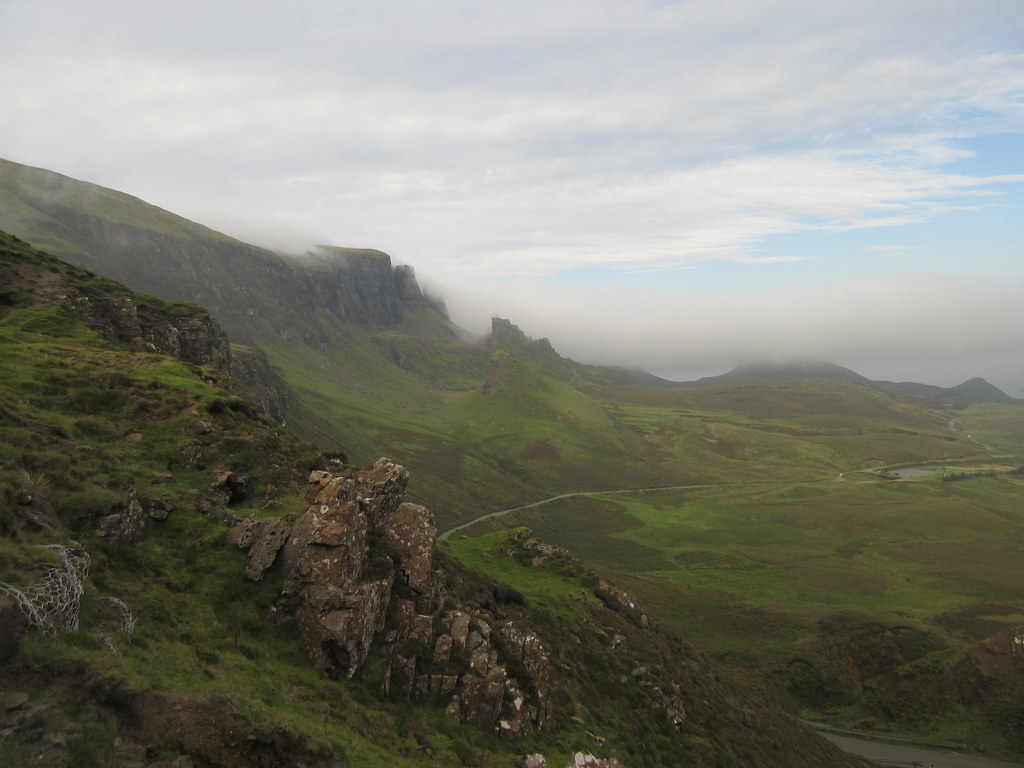 That might be the last island trip of the year, but you never know what is coming up...