Cracking forecast for one day at least, so decided to round off my east-of-the-A9 Munroes.

After checking the stalking forecast too, this is what happened:

0930: Reached Allt Scheicheachan bothy
Stopped for quick break inside away from midges.

1520: Carn an Fhidhleir
Spoke to my first human of the day, a guy coming from Linn of Dee, similarly bitten to death.

1655: An Sgarsoch
Amazing views all round, but esp to the north.

1830: Reached Feith Uaine bothy
Had all to myself, but had to watch sunset from inside (did I mention the midges?).

0945: Up Carn a'Chlamain
Intermittent views, but cool and nice breeze.

SUMMARY
Thought this was going to be a relative doddle - the rolling puddings of the S Cairngorms in summer - what not to like?

But this was bloody hard work.

The long walks in and out were compounded by the heat, lack of wind and incessant midge presence (though I suppose I should thank them for motivating me to make such good time, as long as I kept walking, they were alright - though this was torture, not being able dally by a cool stream).

Also, between Beinn Dearg and Carn a'Chlamain, there was virtually no path. The heather wading and negotiation of peat hags (though dried out) was energy sapping. However, the burns (which I gather can be tricky in spate) were low so crossings were not a problem. Pros and cons to doing this in summer I guess.

But it was really nice to see these less glamorous Munroes in such stunning conditions with excellent visibility. Can see how this route would be tough if the weather was different though.

Bothies were also both in excellent nick. Cheers, MBA.

P.S.
To the man I chatted to cycling back from CaC: don't radiate out from Perth, get up to Torridon and the like! Do the gucci stuff first, you never know when you might get hit by a bus Looking back at start 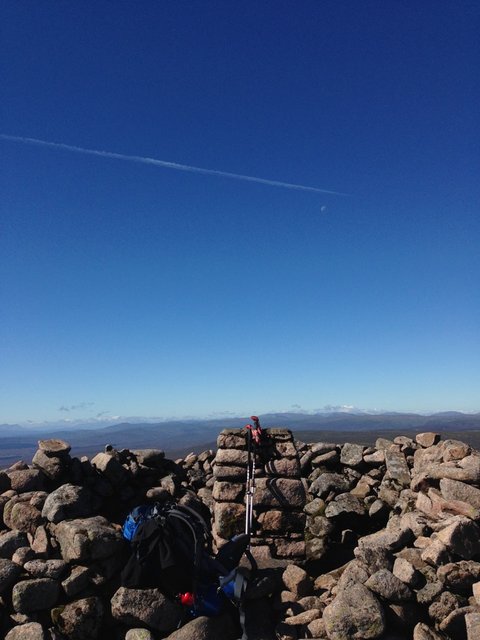 Great report mate, we have just done this loop using your gpx as a rough guide and it was spot on.
We were lucky that we didn't see a Midge the whole way! But those peat hags certainly drain it out of you! We thought the last 8K on the road would be a nice steady walk out, but after the previous 46K it was proper hard work!
Fantastic Bothy in the middle of no where, will be hard to beat!