This summer I completed the Cateran Trail, solo and wild camping each night. Weather was generally great with a few short showers now and again.

After driving up from England, I found a suitable parking space on Riverside Park and set off on the trail about 3pm on a Sunday afternoon. While I would have had a good 5 hours daylight at least I didn't want to go too far on the first leg. I'm never really sure I have everything until I've camped that first night. 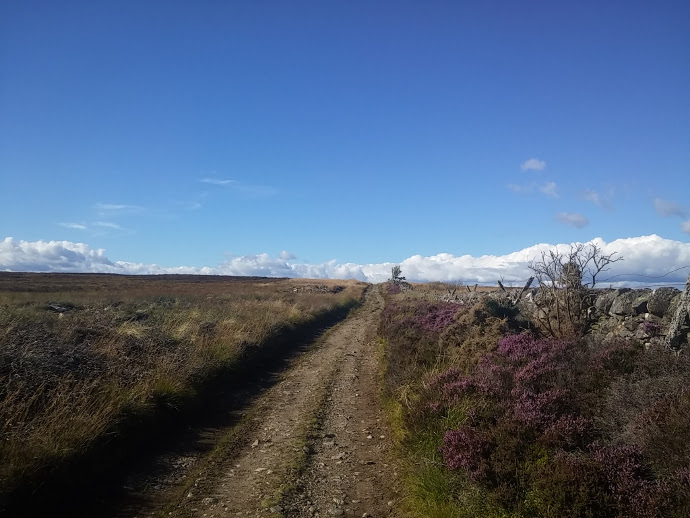 The path to Bridge of Cally.

Camp 1 (56.630657, -3.393018) This was perhaps the worst camp site I picked on the trip. Right beside the trail, on lumpy, heathery glassland. I thoroughly recommend thermorest's neo-air xlite, as this lightweight inflatable mat made this surface perfectly comfortable.

In the morning I was assaulted by a cloud of midges that seemed immune to midge repellent. Ugh.


Part 2: Part Bridge of Cally to (almost) Spittal of Glenshee

I escaped the midges and got on the trail about 8am. Went straight past the turn to Bridge of Cally and walked through till lunchtime at Kirkmichael. There is a great general store here, whose sign promises Refreshments, Groceries, Internet, Petrol/Diesel, and Gifts. I filled up on water and had lunch on the picnic tables outside.

Later the trail rises to it's highest point at An Lairig but before then I'd aimed to camp by the Lunch Hut on the way up. I somehow managed to trudge right past it, perhaps a little distracted by the audiobook in my ear. Rather than go back downhill I continued over the top of An Lairig to.. 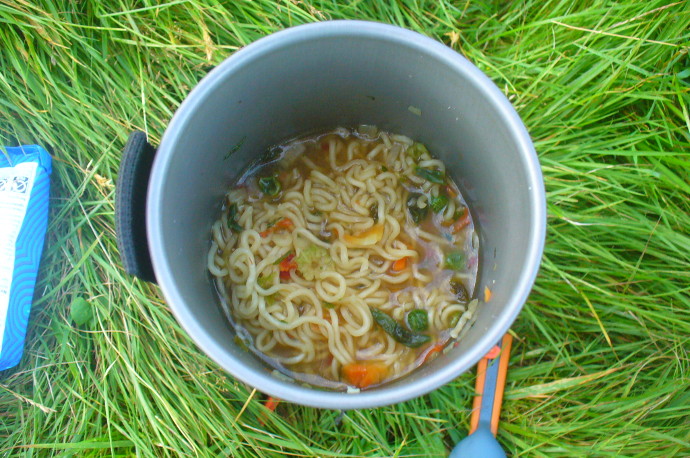 Dried veg and noodles for dinner

Food was cooked and eaten. It was roughly at this point where I started reading Jacquetta Megarry's excellent book, "Cateran Trail: A Circular Walk in the Heart of Scotland". I wasn't going to miss anything else on the way.


Part 3: Spittal of Glenshee to Kirkton of Glenisla

This was a really hot day. It took quite a bit of effort to push myself all the way to Kirkton of Glenisla. It was well worth it though, as the Glenisla Hotel has food and beer and everything else you could want. I was tempted to ask if they had any vacancies but pushed on before dark to..


Part 4: Kirkton of Glenisla through Alyth and beyond.

The top of that hill had horses. Despite not wearing headphones they managed to sneak up on me. They were nicely turned out in stylish retro flares. This was another very hot day. It was made much easier by a lovely afternoon break in Alyth. Alyth is a decent sized town and I made use of a general store, a pub, and the chippy. I was completely refreshed before moving on. A pit-stop in Alyth

The next section goes through the Bamff estate. I caught a glimpse of a beaver in one of their ponds, but didn't see any of the estate's wild boar. A few miles on the roads follow but eventually the fences disappear, and I found somewhere to camp at around mile 55.

I started the day only a few miles from Bridge of Cally, so got there early. There was a general store/post office and a hotel there, but I didn't need anything so went straight through. Soon I was retracing Sunday's steps past Cargill's Leap in Blairgowrie and I arrived back at my car at about 1pm. Completing the whole journey in about 94 hours. The trail was well marked all the way, with only a few chances to get yourself temporarily lost.

Hi, great report. Was hoping to do that this year, but had to put off till next year. Is the book worth getting?
Cheers
Bert

The book is absolutely worth it. It maps out the entire trail with handy mile markers and describes each section of the route. You can get a pretty good idea of where there'll be a good camping spot from it, and if you aren't camping it describes where you can book accommodation and the other local services on offer.

I also had a GPX trace of the route that I found online, but it was rather rough and it even took a short cut at one point.

The book was the only map I needed.

You might already know, but there's also a full description, free OS 1:25000 map with the route marked on and GPS on Walkhighlands here - enjoy the trail when you get to do it weatherman, its a great route

hi there great report. I've decided to do the trail in April 2019 and this has helped. I've completed sections of this trail but never completed it in full. with this trail being so close to home I've kinda giving it a wide berth and done other stuff instead.
not long into planning stages but have decided to do it over 4 days and can't wait to get started.


Would be grateful for any impute and tips. ---- is there anything at Enochdhu ie eats pub etc