Felt like I had an anvil on my back!

Felt like I had an anvil on my back!


As a first-timer on Arran, there really was no choice but to climb Goatfell. It dominates the view as you come into port on the ferry, and if you stay in Brodick, then you simply cannot ignore its looming presence. 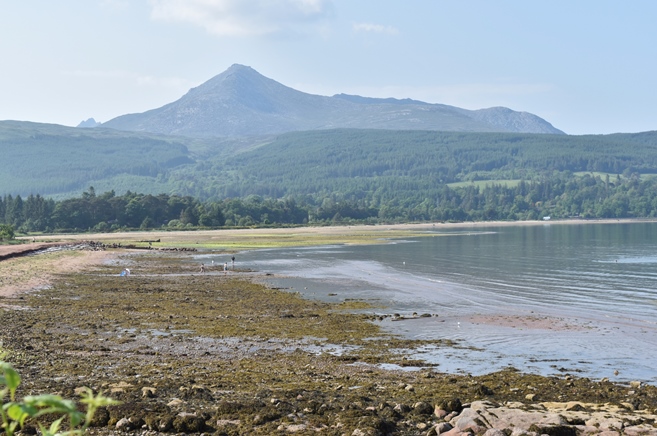 View of Goatfell from Brodick waterside

The day we climbed was clear and cloudless, but this proved to be as much a curse as a blessing. The air was deadly still, not the tiniest puff of breeze. With the humidity also being fairly high, even a mild 20 or 22 degree temperature proved to be unbearably hot, particularly if you're climbing 850 m along a bare path with no shade whatsoever.

We parked at the car park down near the seaside, near Brodick Castle, across from the pub and wine bar. We were only the second car there when we arrived; when we returned from the climb, the entire lot was full and overflowing. I wanted to get an early start to avoid the worst of the heat, which proved to be essential. There is a little shade during the early going as you walk through a woodland, but after 15 minutes it's gone for good.

As you climb up, you can look back and see Brodick Bay, and Holy Island way off in the distance. It should be a nice view, but the air was so hazy and thick that visibility was greatly impaired. The summit is pretty much always in view. The path will eventually reach that ridge and approach the peak from right to left as viewed in this image. As the top gets nearer, you see some amazing rock and boulder fields strewn about the side of the mountain. Fortunately the tourist path is broad, well constructed, and easily followed. Note I didn't say easily climbed; this was a difficult climb indeed, not least because the air was so sultry but also because the path is very steep. The steepest portion is the last one, from after the point where the tourist road merges with a trail that comes up from the valley to the north, right at the start of the prominent ridge visible in the third photo. 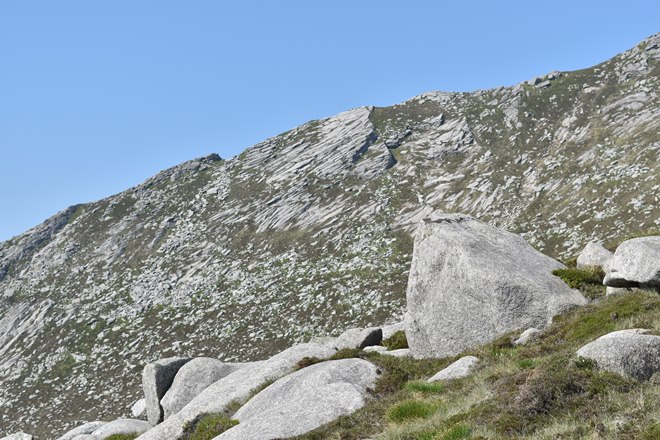 Interesting boulders on the flanks of Goatfell

Finally we trudged onto the summit and claimed our first Corbett ever! We were hardly elated, though; more like crushed in body and spirit, as the photo indicates (my photo, at least). The summit with its anvil

One bit of comic relief was finding an anvil at the top; yes, the solid steel variety. Later on, I looked it up and saw that a very brawny man had carried that thing all the way to the top, as part of a fundraising appeal for charity. I sure hope he did it in cooler weather, but regardless, that took some amazing strength and endurance. I barely could haul my own body weight up there, let alone doubling it with an anvil.

From the top, the views would be tremendous, except as mentioned earlier, the heat and the haze and the high angle of the sun combined to make them rather flat and boring. Glen Rosa still looks amazing, notwithstanding those factors. And Cir Mhor is a really daunting, challenging looking mountain. It will have to wait for my second visit to Arran, though! 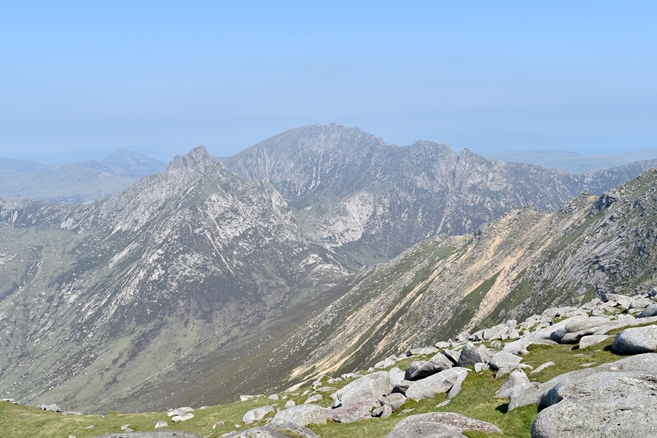 We trudged down hill, happy to have bagged a Corbett, but disappointed by the warmth and haze in the air. Once safely down, we had a well-deserved repast at the wine bar which had some lovely creative items on the menu, along with great drinks. Just the ticket for the tired walker! But hey, it could have been worse: I could have been carrying an anvil!