Share your personal walking route experiences in Scotland, and comment on other peoples' reports.
Warning Please note that hillwalking when there is snow lying requires an ice-axe, crampons and the knowledge, experience and skill to use them correctly. Summer routes may not be viable or appropriate in winter. See winter information on our skills and safety pages for more information.
Post a reply
38 posts • Page 1 of 3 • 1, 2, 3


Well,,here we are, the last Munro.

I've taken 6 years to compleat the Munros, 62 in the first 3 years (27 of those in the last 5 mths of 2013) and 220 in the 3 years since, with a mighty 84 this year alone (including 2 repeats). I approached this day with mixed feelings, disbelief, sadness, liberation and excitement. I considered a stealth compleation, without fanfare, then decided no, I would invite along, well basically anyone who fancied it

With 3-4 weeks between the Ring of Steall and Bynack More, I had time to set up a FB event, work out the logistics, arrange time off work, get the tshirt printed and get the saltire flying

Camping at Dalraddy with a select few, we all met up as planned for a 9:30am kick off at the new starting point, the Allt Mor car park, having published this on the FB event, some stragglers who were not paying attention, ended up at Glenmore Lodge with only themselves for company (no names, Bod, Val and Colin L hehehe). Netted up and ready for the off

We didn't hang around too long, only left about 10 mins after the planned time, mainly because the midgies were UNBEARABLE, probably the worst I've seen in the area. Bit of a shock as there was little or none in our campsite a few miles South. Funnily enough though, the Smidge worked to stop them biting my bare legs, with only a single figure number of bites showing around the top of my socks (note to self, must put Smidge ALL over!!!)

With midge nets still on, we all headed off, sure the stragglers would catch us up. A fine bunch, ready for the road

For those of you who know Bynack More, you will be aware that its a straightforward track pretty much to the top. Passing along the way, we chopped and changed groups, tackled a tricky river crossing where, if we weren't careful, the very soles of our boots may have got wet!!! A pleasant stroll through the woodland

We quickly reached the green lochan, which I had forgotten about so it was a wonderful surprise to see the emerald green waters, alpine scenery and more midgies

At this point, Bod, Val and Colin caught up with us. We had a chance to have a wander on the shoreline, natter with some of the party, before heading off again. Me and big bro, Phil Having a natter along the way

The track veers South East and Bynack More and Beag come into view. The rocky peaks sticking up above the swell of land ahead. Here I spotted another two who hadn't been with us at the start, Seana and Dougie. Turns out they were camping along the way last night and joined us as we passed by. Good to see you guys

As the track incline increases, not dramatically, the wind picked up a bit and there were one or two spits of rain. With what looked like a squally shower heading down the glen from the West, I jacketed up, still in bare legs lol, just in time for the few spots of rain to turn into,,,,,,,,,no rain whatsoever!

Kept the jacket on for a bit,,just to stop me looking silly!

The group of 30 or so intrepid walkers was spread out down the length of the path and met up on occasional stops for a bite, or just a chat. Several saltires flying high, kilts swinging in the wind, we cut quite a picture across the hill.

As we started to climb the latter sections, I spotted a greeting in a sandy trap beside the path, GILL 282, awwwwww you guys

Rod, at the front, had left it for me. A wee message left by Rod Having a sit and a chat Colin and Allan chewin the fat

Reaching the rockier parts, we thought we had lost Colin and Sandra as Sandra was sporting a back injury after a drunken reveller fell on her tent during the night ouch!. (not one of us!) So hanging back a bit to make my big entrance, I had time to reflect on reaching this point. Sat on a wee rock with John for a bit, trying not to well up.

3-4 times on the track, people asked me how I felt,, on each occasion, I almost cried. Felt very emotional but, I decided that I would NOT crumble like a big girl but forge ahead and just enjoy it, like a big girl lol

With John nipping ahead to get pictures, I covered the last 50 yards or so on my own. Up over some rocks to be greeted by a salute of walking poles, held aloft for me to walk through to the summit cairn. Huge thanks to all for that, very special. Reached the cairn, and climbed on top. Munro # 282... How did I get here? What a wonderful welcome to the top I was surrounded by a wonderful group of people I have met along the way, and a couple I only met today, lovely views, some blue sky and I was able to then wander round and take some time to soak it up.

Now for the real celebrations, an hour and a half on the summit with champagne, prosecco, whisky, whisky and more whisky. Just hanging around, chatting, taking pictures etc. I took a few minutes just walking around taking random candid shots, and found Colin, Sandra was just arriving, she had soldiered on and made it to the summit, go girl! 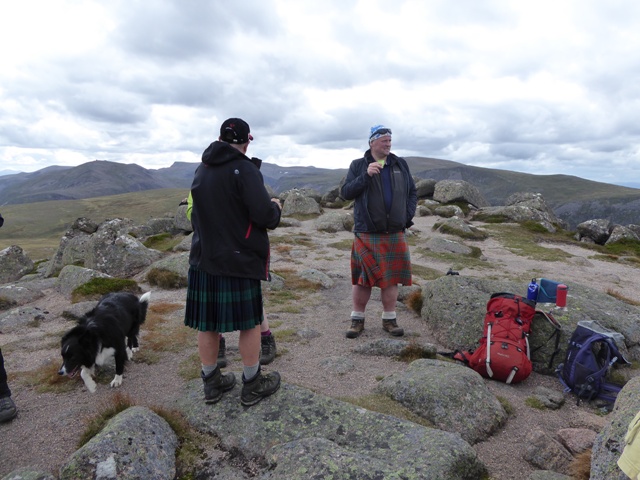 Bod and Wullie loitering in tartan The twa Martins,,and is that Alan or Thomas,,,cant see lol Deborah and Wullie living it up Geo having a swig

I had decided I would leave a memento of my day on the summit cairn,,and before you accuse me of littering, I knew it wouldn't stay long. I had printed out a short story about my compleation day, with my contact details and a picture. Placed it in a spice jar, with a £10 note, inviting the finder to have a drink on me to continue my celebrations and perhaps let me know they had found it. So, we took some time, placing it, not hiding it, so that anyone standing on the cairn would see it, you couldn't see it from beside, only on top. (had to make sure none of our party snuck back to get it lol)

We drifted off in small groups and made our own ways down. Getting back to the sandy patch and the message from earlier, Well Done Gill had been added to the greeting lol Another wee note on the way down

It was all going well for Sue and I , who did much of the descent on together, until we hit the midge ridden Ryvoan pass,,,where even fast moving cyclists were being eaten alive. Then, at the fork in the track,,,we (ok I) decided to follow a man who we had chatted to, as he ensured us , the right hand fork was the one to take....yes,,to Glenmore Lodge!!,,,we wanted the Allt Mor car park lol

Anyway,,,decided to hitch a lift if we could, to the main road and just as a van stopped to oblige, one of our party arrived in a car,, having done just the same thing and with no one at the end point, decided to come looking for anyone. Found 3 of us lol,,,then, as we drove down,,we passed another group on the road,,,they took the correct branch at the fork,,then somehow ended up in the Allt Ban car park instead. How do we get up and down mountains if we cant find the car park?

So after all that, I can only say, I had enjoyed a magical day. Tom, John and myself, chilling at the Pine Marten and Margaret, Mum, Graham and Uncle Tom for joining us to party party.

The following evening, I got an email from the finder of my spice jar 'message-in-a-bottle'. Katie from Moray. This also made its way onto another site, indeed Karma on Bynack More.

I know I will still be out on the hills, repeating the good ones, avoiding the bad ones, redoing the ones I didn't see. But it is with an immense feeling of achievement that I can now say, I am a COMPLEAT BAGGER! Top of the World (credit to Colin Levey for this pic)

You are SO right. Lol

Well done Gill! Looked like you had a brilliant day and well deserved, just wish I'd been there. Enjoy the your continuing journey

Sick Kid wrote:Well done Gill! Looked like you had a brilliant day and well deserved, just wish I'd been there. Enjoy the your continuing journey

Hey,,thanks G, its been a bit of a whirlwind right enough,,not sure I believe ive actually done them lol (I have,,honest

Im looking forward to picking and choosing what, where and when now, pressure off. lol

Congratulations. As to us bikers that day, which was lovely to see in the report, a few of were eaten alive.
Remarkable achievement, a real inspiration to us all

What a lovely story Gill and CONGRATULATIONS

even the whole midge population came on the day

Lovely idea about the jar at the top of the mountain

Great report Gill of an amazing day, good friends old and new. It was a pleasure to be there on your special day

and thanks for the whisky

Great account of the day, Gill - congratulations on the 282 - special feeling

Congratulations. A compleation with a summit view........very rare

Well done Gill that looked like a fantastic day. Except the midges. But even they didn't dampen your spirit.