Skiddaw and a kitten

Skiddaw and a kitten

Wainwrights included on this walk: Bakestall, Carl Side, Long Side, Skiddaw, Ullock Pike


OK so the kitten did not come up Skiddaw with us but it got you reading!
CWH has been on a work experience placement with a Vet practice in the Lakes and was due to be collected on Wednesday evening. Along with the stray kitten she has persuaded us she must bring home. oh what a cutie

Anyway Wednesday being my day off I thought a sneaky trip to bag a Wainwright or two would be in order and asked number 2 son if he would like to join me. Skiddaw was the suggestion he made, so Skiddaw it was.

Skiddaw.gpx Open full screen  NB: Walkhighlands is not responsible for the accuracy of gpx files in users posts
For a munro-bagger, Wainwrights are such fun, you get to add more ticks for your effort.
By the time we had bought essential kitten items, it was nearly ten o'clock. We got to the layby at the start of our walk at about noon. The forecast had promised high cloud and almost inevitable cloud free summits, with minimal chance of rain and exxcellent visibility. It was hot.
We set off pretty fast up the ridge, and I struggled a bit to keep up, but my companion was very patient and stopped every so often to wait for me. Looking back over Bassenthwaite lake Skiddaw from the way up Ullock Pike Bassenthwaite and the Solway coming into view Long Side from nearly the top of Ullock Pike

We reached Ullock Pike after a hot steady climb up the ridge which was very pleasant, no difficulties there. Ullock Pike has one false summit but the true summit is not very much further. We thought of stopping on the top for lunch but there were a lot of people on the top, so we decided to move on to the next top. A short stroll over to Long Side where we stopped for a brew and lunch. We shared the summit with a couple, and a man with two dogs. It was warm and a little breeze appeared which was very welcome. the wierdly named Barf from Long Side Cairns on Long Side summit From Longside to Skiddaw left, Little man centre and Carl Side right. You can see the diagonal path through the scree which is fine. There is a less distinct straight up path as well.

It's not far from there to Carl Side and a third tick but we decided to miss out Little Man otherwise we would be late in picking up CWH and the kitten. So next stop was Skiddaw Old Man the summit. The climb up is diagonally up a scree slope but the going is good, a wee bit loose at the top but no real difficulty. Me on Carl Side top. top bit of the scree path, G waiting patiently at the top. on the ridge identifying all the features on the other side.

There were dozens of people milling about on the top including a five year old sitting on the trig point who had walked all the way up on her own two legs. It was about 3pm and we decided it was worth it to take a wee detour to Bakestall, not that we are bagging Wainwrights or anything but it was not far out of our way and a top we were unlikely to come back for. top of Skiddaw, Little Man behind top of Skiddaw, carl side and long side behind Such a tricky climb up to Bakestall Summit photo on Bakestall - but really it could be anywhere

From Bakestall we contoured round the side of the hill aiming to pick up the top of the track at NY254297 but we came across a path not marked on the map which seemed to be descending steeply in the direction we had intended, so we took this as it was much easier going than fighting through the heather. This was pretty steep and then pretty boggy as it crossed Barkbeth Gill, but it was easily followed to the bridge over Southerndale Beck and thence back to the car. Going off piste around the side of the hill. could be worse! 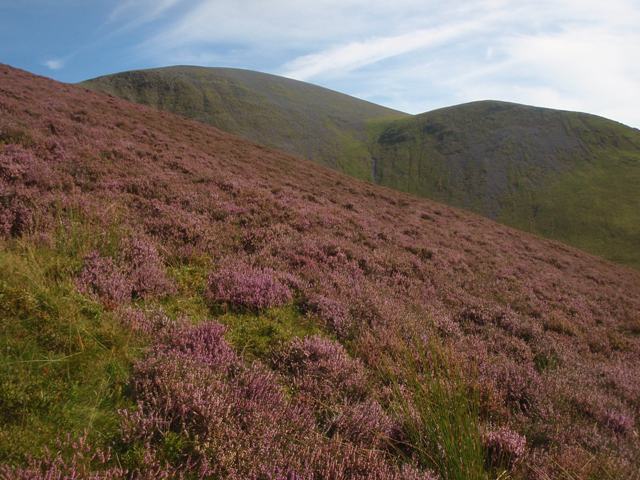 A classic Skiddaw round that, one of the best ways to do the mountain.

Ah good to see those smiley cups out

Should of just taken the kitten

We found a kitten abandoned under a bush at just days old.. Ended up having to take it up Ben Loyal for a compleation as it was too young to go more than an hour or two without feeding - All went well, She just sat in the big front pocket of my Dads rohan top and seemed to enjoy. Of course the top got peed on and dad wasn't happy, but made the day more memorable.. This would be about 1988 I reckon.. Cat grew up to be a mighty beast

that's a great story bc.The kitten is growing fast, very bold and is tormenting the resident lazybones cat but he will learn to cope!

Agree with Simon in that it's far and away the best route up Skiddaw. Good to see the smiley cups on an English 'munro'

Thanks Simon and Anthony. Definitely a lovely circuit. And if it were in Scotland, Skiddaw would "count"!
My happy mug is getting a bit of a wink.

Nice report. I've never fancied Skiddaw because of a combination of proximity to Keswick (= lots of folk), and its apparent lack of "character". But on this route you seem largely to have avoided the crowds; and in these pics the hill looks quite a bit more characterful than I'd imagined. Maybe I should give it a try...

It made me smile to see the smiley mugs in England

mrssanta wrote:And if it were in Scotland, Skiddaw would "count"!

Alteknacker wrote:I've never fancied Skiddaw because of a combination of proximity to Keswick (= lots of folk), and its apparent lack of "character". But on this route you seem largely to have avoided the crowds; and in these pics the hill looks quite a bit more characterful than I'd imagined. Maybe I should give it a try...

Skiddaw definitely counts when you see it from Scotland! It stands out as the most distinctive peak on the English horizon when you look south from the Southern Uplands on a clear day. And there are plenty of quieter routes on and around the mountain away from the tourist track.

Great stuff MrsS, it's always a good day when out with family but those 'young uns' sure do like to set the pace