Binnein Beag was the last of the Mamores we haven't done yet. We had actually planned to climb it from Glen Nevis, but with the unsettled conditions and cloud lying low, it was more reasonable to stick to the traditional route from Kinlochleven, as it follows well worn paths and is easy to navigate in the clag or bad weather.

Many walkers add Sgurr Eilde Mor to this traverse, but we didn't need to so we concentrated on BB only. Even without the neighbour, the ascent piled up to over 1300m

Track_BINNEIN BEAG 14-08-16.gpx Open full screen  NB: Walkhighlands is not responsible for the accuracy of gpx files in users posts
We started from Kinlochleven car park and walked quickly through the infamous Midge Forest... 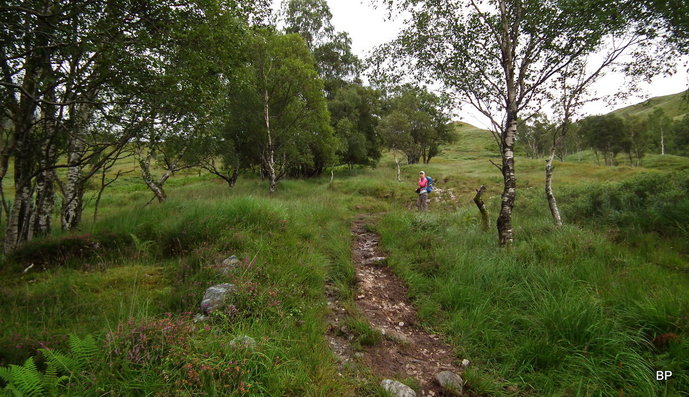 One of my favourite views again, this time sadly, with cloud lingering and no blue sky: We knew, having checked the mountain forecast, that cloud base was likely to be about 600-700m so very little chance for clear summits, bit even in clag, this is always a nice walk (the Mamores behind me):

Allt Coire an Laogh was full to bursting, we had to walk a bit upstream to find a set of stepping stones: As we gained height, all we could see was Loch Eilde Mor below us...

...but even that view soon disappeared and we were now climbing in the mist... and surprisingly, in total silence. Strange, as soon as we left Kinlochleven, we didn't meet a single soul. I expected to see more people heading up on a Sunday. despite the clag, the day was not too bad, cool but not too cold and very quiet (in contrast to the previous week with high winds!).

Of course, we missed the start of the traverse path and ventured into Coire an lochain, had to climb over a few lumps and bumps and around a few puddles, before we found the path eventually. The cloud was thinning and my hopes for clear summit suddenly grew... A loch in the mist: To reach Binnein Beag, we had to descend into Coire a'Bhinnein, losing some 150m, only to reascend the opposite side of the glen. At the moment, we could just about see where we were going: Binnein Beag sat there, across the deep trench, with just its very tip covered in cloud, so maybe... maybe... Descending into Coire a'Bhinnein, the massive slopes of Binnein Mor looming above: At the bottom of the corrie we stopped for a breather, not much to photograph at the moment: 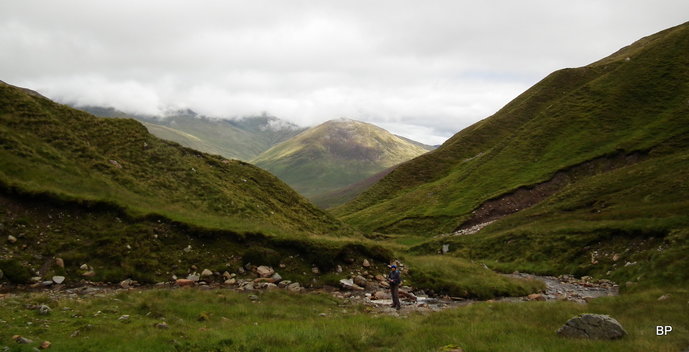 Following the path, we spotted people in front of us - so we were not alone here after all! The only views we had at the moment were along the glen: As we reached the high col between Binnein Mor and Beag, it was still relatively quiet. No wind meant the cloud might very likely stay put, but by now I was enjoying the whole experience so much, that I didn't care about summit views.
Binnein Beag: Binnein Mor from the slopes of Binnein Beag - what a giant of a mountain! The final climb to BB is steep, mostly on loose stones, but a path can be followed most of the way. We ventured off the path at some point and scrambled straight up a few larger boulders, just to make it more entertaining, really.
So this is the way up:

Sadly, the summit was well in clag by the time we got there. We sat on the top for about 20 minutes, hoping for a clear moment, but nada. Still, I was glad to climb my 196th Munro! On the way down, we suffered a bit, sliding down the loose scree, but we were in good mood - no summit views, but the trip was successful. To return to Coire an lochain, we had to lose the height and reascend once again, but we were not tired. As we only had this one Munro on the list today, we could do it at a lazy pace.
The return path: There was a short period, maybe 10 minutes, when the summit of Binnein Beag cleared, we managed to catch it in a picture, but to actually time it right to be there, on the top, for this brief moment... You'd have to be very lucky indeed.

On the return path, passing above Coire an Lochain:

Sgurr Eilde Mor across the corrie:

The final descent - back to Kinlochleven! A long, rather boring slog down the eroded path: All right, the day was far from perfect, but I wasn't that worried about lack of views, it was still great time spent up there and we have finished the Mamores! I know, I know, some of you will now laugh, you all climbed the whole 10 peaks in one go, sure that's the way to do it

Rather than pinching them one by one Panther style... To my excuse, I must say: the Mamores are such a fantastic group of hills, that I'd rather do 10 shorter walks than 1 ultra long one

.........
My next TR will be about one emotional journey. With our wedding anniversary coming, Kevin wanted to take me somewhere special and what can be more special than Torridon? TR will come soon.

Your done and dusted with the Mamores - I've still to start

I've still to do these two and have been hankering after them all summer.... but no one I suggest it to is all that keen.

But if and when the day comes I'll refer back to your excellent report!

Huff_n_Puff wrote:Mamores - a big red splodge on my map - thanks for tempting me

Would love to HaP!