This was the Englandshire Bank Holiday Weekend and with CWH on a yoof weekend we had some unfinished business from July to complete. After the Mullardoch round we had planned to take a few days to get home via Glen Fashie and Dalwhinnie, but instead we bailed to Aboyne after being blown over on Carn Eighe and had a bit of R&R instead. We had both been working long hours the week before the bank holiday so never had time to pack or get ready till Saturday Morning. Leaving home mid-morning we got to the parking place at Achlean around 6pm and set off for a nice evening stroll.

The idea had been to walk up Glen Feshie a bit and camp at a nice spot, but there was absolutely no breeze in the glen and midge nets were the fashion accessory of the moment, so it was clear fairly quickly that this was a night to camp on the plateau. We passed what looked like a DofE group camped by the bridge and were glad it wasn't us!

The heather was in full bloom and the smell of heather mixed with bog myrtle, juniper and pine is one of the most gorgeous things, cannot be captured in a photo. riverbank washed away, taking a bit of path with it

Crossing the Allt Garbhlach was straightforward but there was plenty of evidence of the dramatic power of the river in spate, with the path washed away on both sides of the allt. Presumably this is the result of the flash floods last Christmas time which had such devastating effects in Ballater. 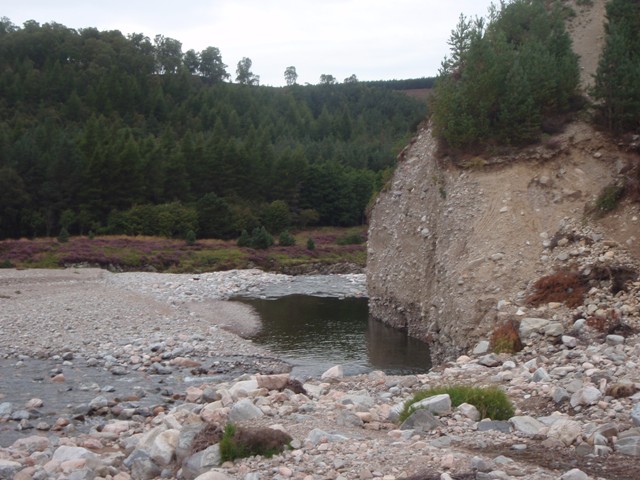 Where the path to the Allt Garbhlach is washed away

There is a good, well maintained path which follows the East side of the Feshie through heather and forestry - again in a couple of places there is dramatic evidence of erosion of the riverbank where bits of path have been washed away. near the ford marked on the map at 849941 - but I cannot see how anyone could ford the river here! A good track picks up the climb through enormous juniper bushes and up the side of the glen above the Allt Coire Chaoil giving easy going on a nice gradient right up onto the plateau. We had thought perhaps this was the first time for us to camp on an actual Munro summit but by the time we got to the plateau the light was fading quickly and we pitched camp on the first good flat spot we found, just by the track where it turns right towards Mullach Clach a'Bhlair. We were pretty tired and considered not bothering with supper but in fact felt loads better for a blow up meal and a pudding. Deep heather. I'm glad there is a good path

It was pretty still even on the plateau and in the morning the sky was overcast with the occasional midge apparent even at this height. We managed our breakfast and took a wee morning stroll to the summit of Mullach Clach a'Bhlair reaching the top about 9.20am. It was really beautiful. There was high cloud, and mist in the valleys. We could not see far and it was not really suitable for photos but there was bits of cloud and mist coming and going around various hills which was really atmospheric. As long as we kept going we were not bitten. What's this I wonder? In the distance you can see Roseberry Topping. I thought that was in Yorkshire!! Back to the tent to strike camp and then set off for Sgurr Gaoith. From far around it looks just like Roseberry Topping sticking up above the plateau. The track leads a reliable way across the Moine Mhor avoiding the need for any bog-hopping at all. What a pleasant experience, and also two lovely burns to cross where water can be topped up. We cut off a corner from the track near pt. 957 to meet the path which goes to the shoulder of Carn Ban Mor and from then down into Glen Feshie. on the way towards Carn Ban Mor

We dumped our bags at the top of the ridge and stuffed our pockets with snacks, GPS and camera calculating that the 2.25km to the summit of Sgurr Gaoith was roughly equivalent to Roseberry Topping from our house (in fact it is a lot less to climb). Unfortunately just as we got to the last bit of "up" a cloud came in and covered the summit and this stayed with us until we returned to the bags. We sat on the top of the Sgurr and snacked on oatcakes and cheese and felt a bit sad that we could not see down the spectacular cliffs to the loch below. A Reindeer on the Edge! 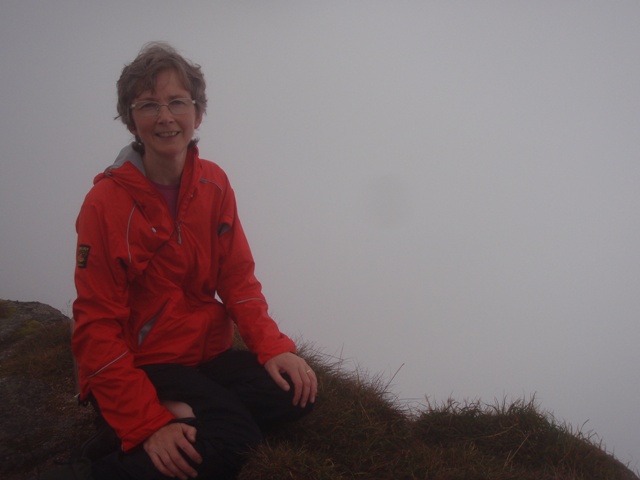 And me. A midge got me through that trouser ventilation hole. arty shot on the top

While returning to the bags we met a large party of people who ribbed us that they had hidden our bags, and a lone backpacker who had walked across the Moine Mhor from Braeriach. The bags however were just where we had left them and we went in search of the spring marked on the map at 891967. We found a spring, but it was at 889969. We stopped here for a brew and nearly got eaten alive by midges. There was a breeze which arrived tantalisingly for a few seconds at a time, just to disappear shortly afterwards. So we did not stop long, but carried on down the lovely path back to Glen Feshie as the sun came out and it became a really gorgeous afternoon. Oh look the sun is threatening to come out! the trail of the Lonesome Pine lots of these rather revolting fungi in the woods 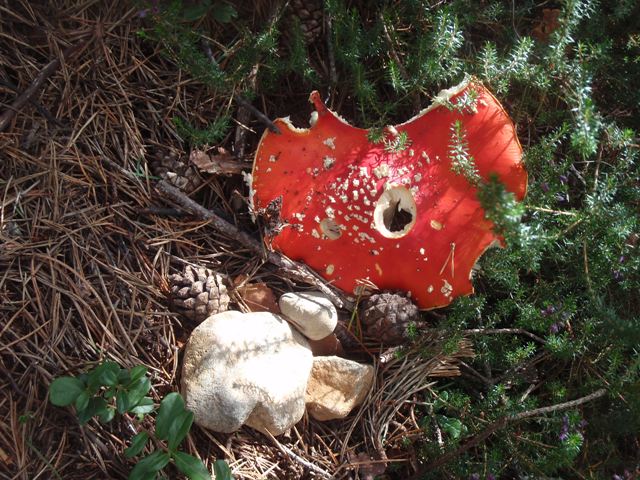 and this dangerous looking one back on the valley floor near Achlean again.

Arriving back at the car was pretty midgy again so we jumped in quick and ate our picnic as we drove to layby 94 to finish our adventure. We had another Munro to climb before bed.

sgurr Gaoith and Mullach clach a'Bhlair.gpx Open full screen  NB: Walkhighlands is not responsible for the accuracy of gpx files in users posts

- was probably my first ever hill, when I was almost too young to remember

Lovely photos despite the weather.

I really enjoyed your report and had to laugh at you wandering round looking for highest point of Mullach Clach a'Bhlair. We were up there in snow and mist and had to use th GPS find the summit

- was probably my first ever hill, when I was almost too young to remember

Lovely photos despite the weather.

I never heard of it till I moved to Teesside in the late 80s. But it's a good hill for a quick workout.

Cairngorm creeper wrote:I really enjoyed your report and had to laugh at you wandering round looking for highest point of Mullach Clach a'Bhlair. We were up there in snow and mist and had to use th GPS find the summit

the cairn was obvious but very small and in snow would easily be hidden. But then I reckon if it is so hard to tell it really doesn't matter too much!

I too remember Roseberry Topping from a childhood living in Marske and always loved seeing the pointy top of it! Also love your evocative photos of the heather which I can almost smell from your description.

dogplodder wrote:I too remember Roseberry Topping from a childhood living in Marske and always loved seeing the pointy top of it! Also love your evocative photos of the heather which I can almost smell from your description.

thanks dogplodder. I never knew Roseberry Topping till I was in my twenties but it is a great hill for keeping the hill-legs going.
I'd love to bottle that late summer smell.