It's a conundrum that bedevils many walkers.
When another car pulls up at the start of a walk and at virtually the same time as you.
Do you speak? Do you keep quiet?

Anyone that's walked with me knows I am a talker.... I never shut up

This time, I didn't get to speak first, one of the walkers from the other car came across and introduced himself. Turns out his name was Rob from Bristol, although he'd walked extensively down in Wales this was to be only his second Munro and he was tackling it with his son Mack.

So, chatting, we set off from the narrow "layby" by the little sign pointing the way to Ben More and up the great track to the base the infamous mountain, Ben More. 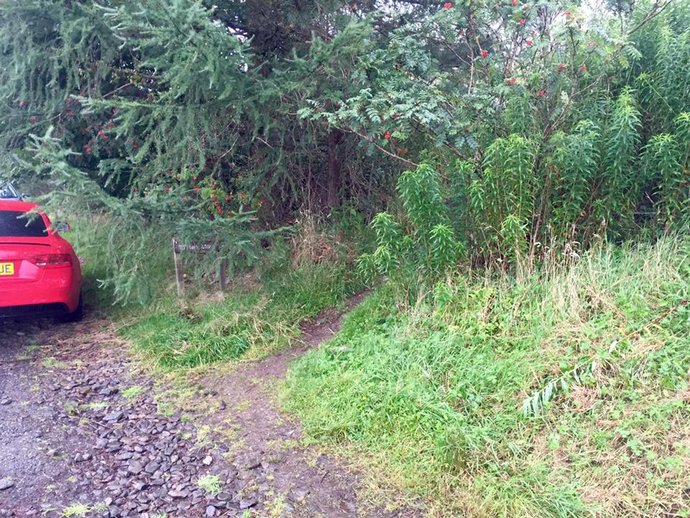 I had considered walking up the glen and tackling these two from the bealach between them. However, when I reached the base of the steep, wet path up the infamous mountain I decided, the only way is up and the two Englishmen followed. Even from here the view down Glen Dochart is grand with Loch Dochart and Loch Iubhair prominent. The path is one of those that begs the question, "why is it so wet, when it's so steep?" The lower reaches are not pleasant and I don't think the Bristolians were too impressed with it!

Eventually though, the path begins to dry out and becomes the kind of dirt path typical of Perthshire and Stirlingshire hills. Despite what some route describe, the path is small, but obvious all the way up and after it dries out higher up becomes a very good and obvious route up the mountain.... at least when there's no snow on the ground! Higher up I stopped by a big boulder for a breather thinking I was only 500 or 600m up, only when I started walking again to round a corner and find the wee low wall that marks the boundary of the steep ground in Sloc Curraidh Corrie.. a nice wee bonus to discover I was 200m higher than I thought I was! Result!!

The path sticks rigidly to the left hand side of the wee wall, even as it begins wee zig-zags up the steepest part of the hill to gain the rocky shoulder of Cuidhe Chrom. The good thing about steep is, up achieved quickly and before I knew it I was cutting along the side of Cuidhe Chrom with great views of Loch Tay in front of me and Loch Iubhair down below me. Whilst, I was faffing about with black and white photos of distant lochs the Bristol Rovers had shot ahead of me and were making short work of the final, and at times rocky, slopes up to the summit of Ben More from Cuidhe Chrom. After Loch Tay comes into view, it's not long before the summit is reached and the massive cairn just seems to suddenly appear and dominate the summit area. Annoyingly, just as wee reached the top, Scotland favourite view... a generic grey background rolled in and robbed us of any view from the summit. At least it had been good on the way up. We touched the cairn and the trig point then settled in for a spot of lunch. The summit had been reached 1 hour 55 minutes. After sharing summit stories of walks in Wales and Southern England, the Bristol Rovers decided that one hill was enough for today. However, they wanted to descend to the bealach and walk back out down the glen rather attempt the steep descent down the way we climbed.

As we began walking down the bealach between Ben More and Stob Binnein the wind really whipped up and we took a buffeting. The Bristol lads were undeterred though and briefly considered taking on the Stob as well. They even seemed to enjoy the wee easy down scrambles near the top of the Ben More.... these can be bypassed to the left... But as wee reached the saddle, they made their final decision. With plans to take on Bidean na Bian or Ben Lawers the following day they didn't want to over do it today. So it was with well wishes and smiles that we parted by the massive boulder in the bealach.

The skies had cleared again as I began the climb up Stob Binnein, cheering my mood after the loss of the Bristol Rovers. As I climbed I reflected that the Bristol guys had been great walking companions and I hope they enjoyed the rest of their stay in Scotland. They had certainly made my day more enjoyable.

From the bealach and on the descent of Ben More, the Stob looks intimidating, but again I found the ascent to be easier than expected. Much less steep than Ben More, the 300m climb passed by quickly. They've even built a wee staircase to take you up the final few metres onto the small summit plateau. With blue skies above, I thought I would have the summit to myself but, just a matter of seconds after making the summit and snapping a picture of Cruach Ardrain I was joined a walker from Shropshire, who had climbed up from the Inverlochlarig side. We had a wee chat, he was planning Ben Vorlich the following day. After taking in the fine views of the Trossachs, Meall Reamhar, Ben Lawers and Loch Tay and the aforementioned Ben Vorlich and its fearsome pal Stuc A'Chroin We snapped a summit photo for each other and parted just as the clag began blowing in and over in waves. One moment clear, one moment foggy. 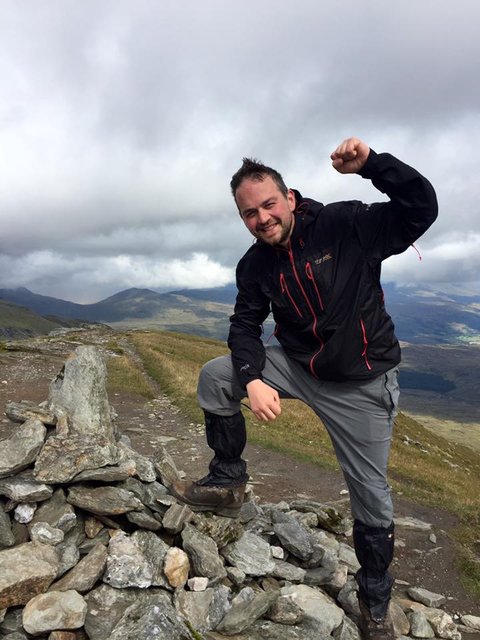 The waves of cloud continued to blow in as I made it back down to the bealach and massive Clach nan Bealach Eadar dha Bheinn. I stopped here and looked for signs of a path down to the glen and found a line of flattened and soaking grass that gave some sort of resemblance to a route down. Two steps later... I was on my backside The path is instantly worse that mud fest that was the ascent route. Mud, steep wet grass and now rain did't make for good walking buddies and it was a slow business making my way down the hill. Even once the path by the burn was picked up the going wasn't great until the path threaded through a line of crags an became drier on the other side. At least I had dropped below the cloud level and could see where I was going better. For a while the path becomes grassier and dry until the floor of the valley is reached and it crosses the wee side burn and enters an area of reeds and grass down beside the Benmore Glen Burn. The going is wet, but flat! After the steep descent, flat is good! That path plays join the dots between several huge erratic boulders along the glen, before finally meeting up with the good track the walk started on, at a bend just before track end. The farmer has a sheep feeder stationed at the join. Once the track is picked up the going is much easier and good time is made, before I knew it, I was back at the spot where I left the track 5 hours 45 mins earlier. Across the other side of Benmore Glen heavy machinery was at work as a new hydro project was taking shape. It causes no obstacle to the walk and 15 mins later I was back at the car and ready for home! Finally the big beasties of Ben More and Stob Binnein have been slain and the conundrum was answered... it's good to talk! Re: The Bristol Rovers - A Ben More and Stob Binnein Conundr

Great route that, SL. You're right about the ascent being steep but quick. Despite its 'notoriety', I found it a fine way up. Glad you got the view from SB, that's a nice summit. It's always good to chat with people you meet at the car park, and walk together if you have similar plans. Pity the other two missed SB; it doesn't take too much extra effort after the initial slog up BM.

Users browsing this forum: No registered users and 113 guests