A River, Some White Rocks, Flowers, and Two Munros

A River, Some White Rocks, Flowers, and Two Munros


There is only confidence as water swirls and flow under the bridge, somewhat unlike the heavy clouds up in the mountains; somewhat different from back in Glasgow, where people hit rocks and lose it. I took the buss out here after work on a Friday, and quickly raised my tent close to the bridge as the sun set. As I fell asleep to the sound of the river I could let go of Glasgow, and fully focus on what was ahead of me. I was up early in the morning that following day, and decided to leave my tent and heavier equipment at campsite, and come back later. I passed by the sleepy community and an empty train station as I began my walk up the hills. The first part of the trail ascends rather slowly along a stream leading up to Coire an Dothaidh. As I entered the bowl, it struck me that these mountains oddly enough appeared friendly with their cliffs embracing me on both sides, and until now (since I basically did not know what to expect from this walk) I had carried some hesitation up the slope. The small lochan and cairn on the bealach will serve as a good center site for your walk on these Munros, but remember that their toll is of you to always make a decision on where to go next as you pass them by.

My first decision was to go north to the peak Beinn an Dothaidh, and then see if I had strength to do more when I came back. By now the weather wasn’t very good, and I knew that this would be one of those walks in the clouds, with little means of navigation. Luckily the path was pretty clear to begin with, and my little compass that I had acquired granted me knowledge of the north.

I had noticed already early on, that the path up the mountain was ornamented with small stone of snow white quartz (could be wrong?), and up here a formation of it stood out in the fog and caught my attention. Stones and rocks inherit some of the grandness and beauty of the mountain itself… I like that thought. Further north, the path is not as well defined on the boggy grass slope towards the summit of Beinn an Dothaidh, and I found myself looking more frequently at my compass to keep a somewhat straight line northwards. After a short while tough, there is a clear path again curving northeast pass a stream, and it takes you to the ridge of Beinn an Dothaidh. Up on the ridge I slammed my walking stick into the ground, to use it as a mark, in order to know where to turn back down. Even if one possibly can use a different paths down from the summit, I did not want to take any risk of going down the wrong slope in the fog. Well back at the center cairn and lochan, I once again had to make a decision of what to do next. The weather had cleared up slightly by now, and I got a view of the valley to the east and even Loch Lyon in the distance. All this made me forget about plans of other mountaintops, and I got an urge to explore the valley in front of me. I made my way eastward to a waterfall to the Beinn Dorain side of the valley. There I ate my lunch, and food together with blissful Grampian views of green mountains filled me with vitality. Again, I turned to my center site, and made the third decision of the day. By now, more people had made their way up here, and once heading south to Beinn Dorain I found myself talking to one or two new friends. Once up the first steep slope from the bealach, the path south is pleasantly straight and mostly flat, making it a relaxed stroll to the summit. Closer to the peak I found myself walking along the steep mountainside, and as the clouds at times got interrupted I got partial but grand views of the River Orchy far down below. This time I could bring my stick to the cairn of Beinn Dorain, and I took some time to rest before going back down. 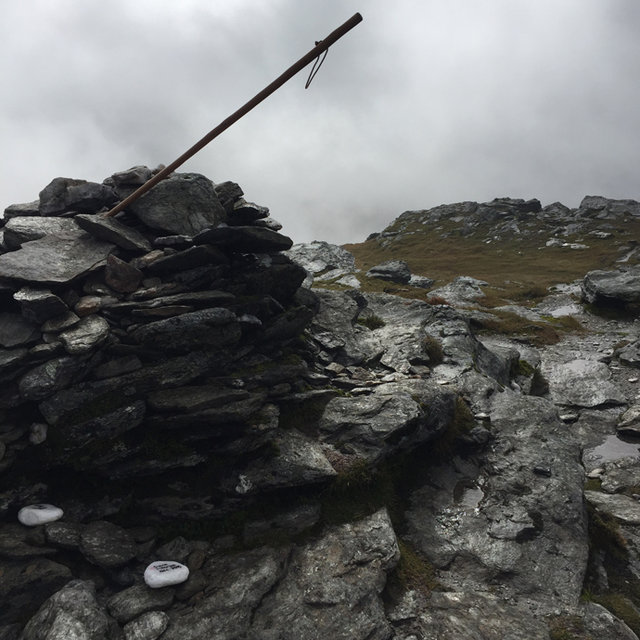 I passed my dear center cairn again, made the decision to finally leave the mountains, and descend down the slope towards the river. On the way down I noticed wee flowers along the path, and I thought to myself that perhaps, after all, the most beautiful things in this world is that of which is living. I was ready to get back to Glasgow with a little bit more confidence…