After much procrastination, I could put Fisherfield off no longer. My main concern about tackling these hills from Shenaval was the river crossing, but I thought that an approach from the east, via Loch a'Bhraoin would avoid this problem.

I set off from home mid-afternoon to drive up the A9 and head over towards Ullapool from there. Sunshine and showers for the journey, although as I neared my destination, more determined rain came on. I parked at the big lay-by at the bend in the A832 from where you can access the western Fannichs and set off.

Not the most enjoyable of walk-ins I have to say! The rain came on steadily and all of the streams pouring into the loch were high, so, whilst their crossings were not difficult, they did stop any rhythm that I might have built up in my walking. Also, my feet were now soaked! Little of note to report on the lochside, apart from a few fish jumping. The track as far as the house at Lochivraon was easy to follow, but is made of small stones that you sink into with each step, which makes for tiresome walking. Once past the house, the track becomes a footpath that fades and reappears at times. It didn't take long after this for me to decide to pitch the tent.

As soon as I stopped, hordes of midges descended, so my planned brew was replaced by a quick drink of water, then inside.

I awake with first light about 5am and decided to get up and get on with it. again, the midges were unbearable, so breakfast was a few digestive biscuits and more water. The campsite - Looks ok when you can't see the midges!

I made my way up to the watershed and then dropped to the burn that feeds Loch an Nid. Managed to cross the strams fine, although they seemed to have dropped quite a bit overnight. By now the route leading to the ridge was well in view. Sgurr Ban to the right, with the route between the crag and waterslide quite obvious

Although there was no path at all now, the going underfoot was pretty firm. Bit of a pull up past the waterslide, then the slope eased off towards the ridge, although it took me longer then expected to get there. Good views up to the ridge leading to Sgurr Dubh with the early morning sun shining rosy on the rocks.

I was now above the midge line, so could stop for a proper breakfast just before I gained the ridge. Looking east from just before the ridge

Once I gained the ridge, the going became much easier, with a path leading to Sgurr Ban. Up and down from the col in about 45 minutes. The route to MCMF looks quite intimidating, but a path leads up through the scree and shingle. I don't think I have ever been on a sandier hill! Some boulders just at the summit, but again, it was an easy enough walk up.

Unfortunately, from here Beinn Tarsuinn looks quite far away, but I dodn't want to tag it into my A'Mhaigdean day, so set off for the hill. I needed to take care on the initial descent over quartzite blocks, which I imagine could be very tricky on a wet day. However, once I got to the bottom of the slope, I picked up the path that traverses under Meall Garbh which took me to Bealach Odhar. The grassy slopes leading to Beinn Tarsuinn were quite wet on the lower stages, but straightforward. A couple of ravens entertained me with an acrobatic display.

The problem with this route is that to get back to the car, I now had a very long walk, including the re-ascent MCMF. Try as I might, I couldn't see any way to traverse this hill. 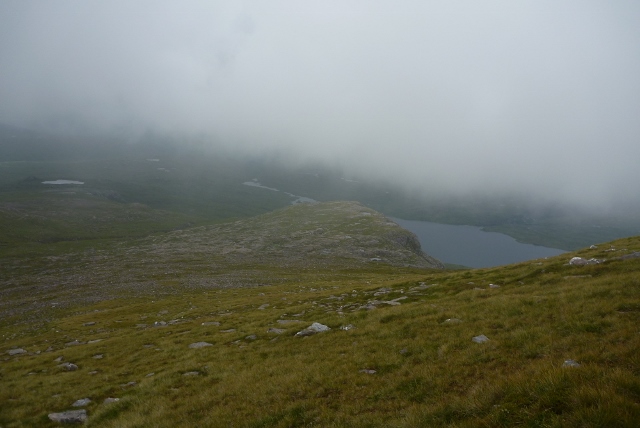 A misty Loch Fada on the descent of Beinn Tarsuinn Dropped down the ridge, then started the long, sweaty and unavoidable re-ascent of MCMF. Glad to get to the top, then a long, long slog back to the tent. Stopped to chat to a few chaps who where heading into Fisherfield for some fishing - I must say that I didn't envy them! The walk back along the loch seemed endless and I was cursing the estate for the surface of the track! Looking back at today's hills from the end of the loch