Most of us would agree, a round of hills such as the Munros or the Wainwrights is more than just a ticking exercise. It means some great days out, and travels to many different parts of the region in question. But many summits are only fleetingly visited, hopping from one to another along ridges. This can give some superb walking and magnificent views, but also misses out on a lot that many of the hills visited have to offer. Climbing each of Wainwright's 214 fells individually brings you more in touch with the character of each one. This also introduces plenty of fine approaches via side ridges, gills and valleys, that would otherwise be missed.

So I arrived in Ambleside on a cloudy Sunday morning, but with an improving forecast. Climbing High Pike would complete a round of Wainwrights by direct ascent. Then what? Hartsop above How and Hartsop Dodd were the two Wainwrights in the Eastern and Far Eastern fells I'd been away from for longest, so a route was contrived taking them both in.

Walking along Scandale, the cloud began to lift from Low Pike and High Pike, but kept hanging around. 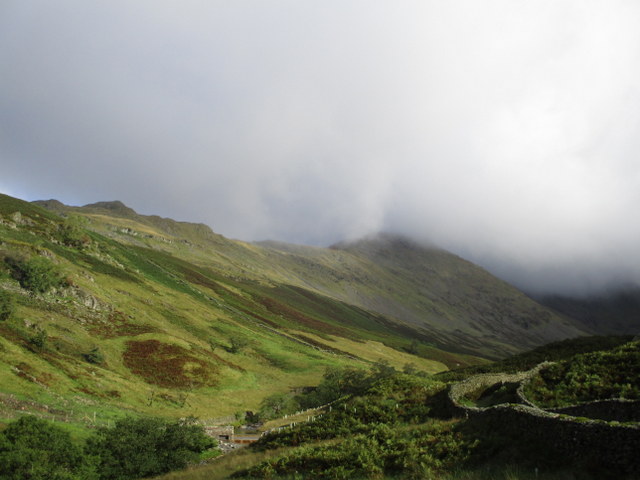 There were one or two spells of light drizzle before I started climbing. 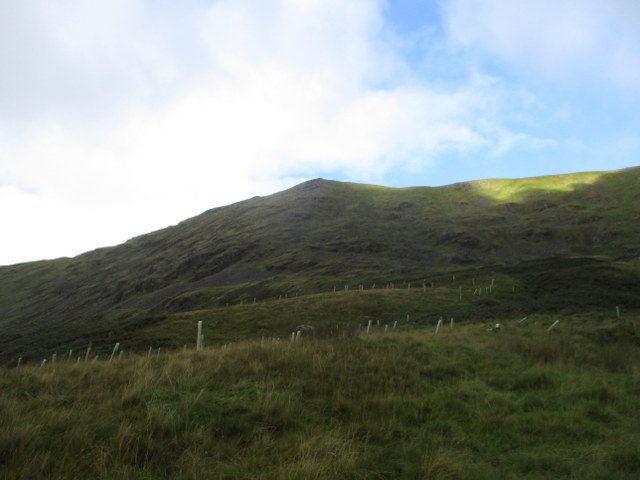 The ascent was steep, but not too difficult. It was largely on grass, with a few stones. Underfoot conditions were slippery, so care was required, and hands used occasionally. In drier conditions, hands might not be needed. 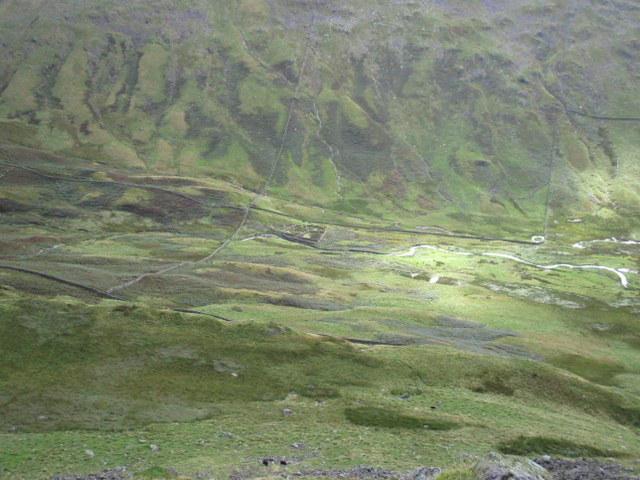 Scandale in retrospect from the ascent 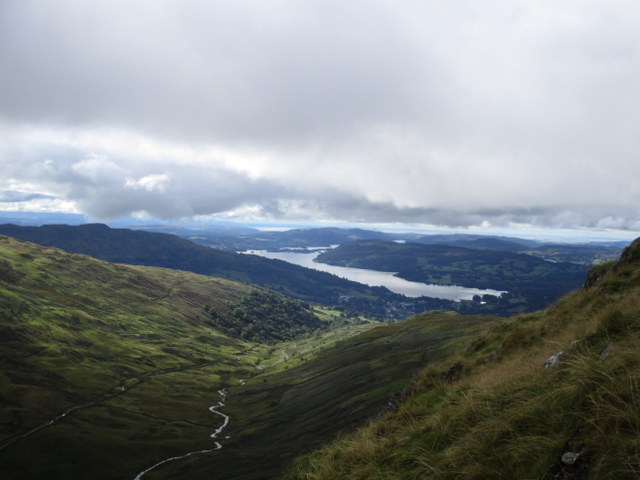 Windermere seen from the ascent

So I arrived on High Pike, completing my direct ascent agenda. There was a partial view from the summit, but the route ahead would lead into the clag. Three men from Brno in the Czech Republic appeared at the summit. They were on a wild camping trek, and heading for Helvellyn via Fairfield. 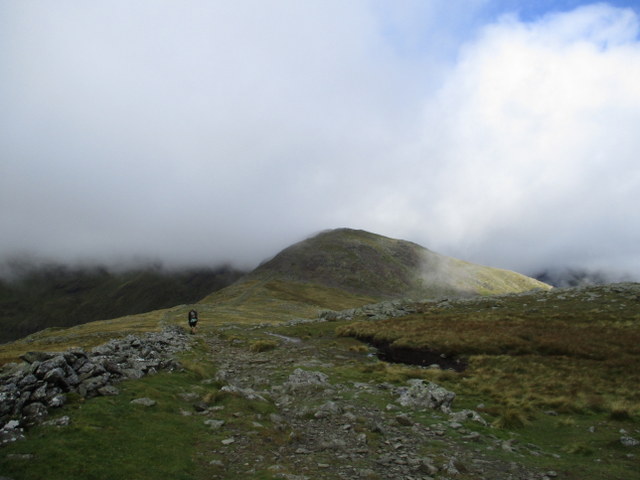 The Czechs set off before me, heading north while I ate something. I caught up with them on Dove Crag, with not a lot to see. At least it wasn't raining. I met them again on Hart Crag, still in cloud. As they set off for Fairfield, I said ,,na shledanou" and moved off towards Hartsop above How. There had been fewer people than might have been expected between High Pike and Hart Crag, considering it's a section of the Fairfield Horseshoe. But one or two were climbing Hart Crag via the ridge by which I was descending. Moving towards Hartsop above How

I was soon below the mist, and enjoying views from Hartsop above How. Lower end of Dovedale from the Hartsop above How ridge

The cloud continued to clear, as I made my way down. Looking back to Hart Crag and Fairfield while descending Patterdale valley from the Hartsop above How ridge Angletarn Pikes from the descent Brothers Water and Hartsop Dodd from the ridge above Cow Bridge

When I 'landed' at Cow Bridge car park, it was time to put on suncream. Anyone doing this circuit on a budget could have started and finished here, saving the Ambleside parking charges. But as the High Pike direct ascent had been my primary target, I wanted to make sure of getting that done. And on a day trip, contributing to the area's economy isn't something I begrudge after the devastation caused by Storm Desmond last year.

I've no plans as such for a second round of direct ascents, but as I'd descended to valley level, the subsequent ascent of Hartsop Dodd would have earned the first tick! Ascending Hartsop Dodd, looking back at Brothers Water and Ullswater

Some say this summit is unremarkable, but it's reached after a lovely climb from Hartsop with great views in retrospect. Moving along the ridge to Caudale Moor (Stony Cove Pike), I looked back north, and could see the Southern Uplands, an area I had visited about a week earlier, on the far horizon. The summit was reached - it's more of a plateau than a pike, but has good views. Next I made my way to St. Raven's Edge. This wasn't one of Wainwright's favourite places, or maybe he was just in a bad mood when he visited and wrote about it. I thought there were some decent views from here. Again, on the section of the walk from Hartsop, I'd encountered people here and there, but not many. One place that wasn't going to be so quiet was the A592. I think Caudale Moor to Wansfell is the only ridge route from Wainwright's pictorial guides that crosses an 'A' road. After looking both ways, I was heading for Wansfell, at first over flat, marshy ground. Things became a bit drier underfoot as the gentle ascent began. En route to Wansfell, looking back at Red Screes and Caudale Moor

When I arrived at Baystones (Wansfell's summit), I was still in warm sunshine. But cloud was bubbling up in the south and west, with higher peaks over there becoming obscured. Next I moved along the undulating and, in places, marshy ridge to Wansfell Pike. This is a popular top, easily reached from Ambleside, so I was quite surprised to have it to myself. It's a great viewpoint. As I made my final descent to Amlbeside, I did meet a few people coming up. Coming back down to Ambleside

I reached the car at 6:55 pm, late enough to avoid the heaviest of the traffic leaving the Lake District on a pleasant Sunday afternoon.

So, I now claim to have climbed each of the 214 Wainwrights by direct ascent. Of course, what classes as a direct ascent and what doesn't is a matter of opinion, as with any other 'rules' concerning hill bagging. What really counts is having found a good number of new and interesting routes to climb familiar Lakeland fells.

Well done Simon, looked like a fine day to finish off your direct ascents with some nice atmospheric mist.

Well done simon, at this rate you will run out of different things to chase on the hills

All +1 if we include Hartsop Dodd again Simon, fantastic stuff

Great achievement mate, by any route, even more so by direct ascent, well done

Nice idea going over the tops from one valley to another and back again - a good way to notch up the amount of ascent.

RTC wrote:Quite an achievement! Apart from Wainwright himself I wonder how many people have done this.

Thanks, RTC. It's a more popular challenge than you might think among Wainwright baggers. However, I believe AW himself did not climb them all by direct ascent (even if you count Helm Crag

). The obvious omission would be The Nab. It appears he only reached this one via Rest Dodd, to minimise what was then a trespass in the Martindale deer forest.

johnkaysleftleg wrote:Well done Simon, looked like a fine day to finish off your direct ascents with some nice atmospheric mist.

Cheers, Anthony. I'm not sure those cloud pics are as atmospheric as Chris's from Canada, but the day was made interesting by changing conditions.

mamoset wrote: Well done simon, at this rate you will run out of different things to chase on the hills

Thank you mamoset, but there are enough hills left in Scotland alone to last a lifetime, and then there's Wales...

ChrisW wrote:Personally I find once I make a descent to a valley floor I can't seem to find my way back up

...I'm not surprised, considering the height of the mountains in Canada.

dav2930 wrote:Nice idea going over the tops from one valley to another and back again - a good way to notch up the amount of ascent.

...true. It's a good way of training for the Highlands when you live in England, seeing as some of the Scottish rounds have at least as much ascent as this, even when you stay on ridges.

What a terrific objective this was - well done

Congratulations Simon - that's quite a feat. Have only been up two of them a few decades ago - if I ever get round to walking more, think I'd be taking the easier way out and joining them up though ! - cheers

Broggy1 wrote:What a terrific objective this was - well done

Thanks Broggy. It was one of those objectives which doesn't actually become one until you're a good way through anyway. Then you realise you've a lot of ticks on a list you hadn't realised was a list until someone else points it out. Although Wainwright himself did mention direct ascents in the Wandope chapter.

rockhopper wrote:Congratulations Simon - that's quite a feat. Have only been up two of them a few decades ago - if I ever get round to walking more, think I'd be taking the easier way out and joining them up though ! - cheers

Cheers rockhopper. Some great ridge walks to be had joining them up with lovely views, and a lot easier than the Munros. Talking about doing each Munro individually and 'properly' as some people might say, this Wainwright round was much easier too - I can't claim that all these direct ascents were from sea level.