My first report, feel the day warranted it

Left Perth about 2am. Up the A9, down the Laggan road dodging dozens of deer, only able to go about 30mph for awhile. Driving down Glen Nevis by 4.45. Parking machine at Achriabhach broken so happily saved some money.

Started walking just after 5.30 and took a bad route onto Mullach nan Coirean over a cut down forest having completely missed any path. Summited 7.40. Nice easy path to follow to Stob Ban for 9am summit. Clag down to about 800m so far. 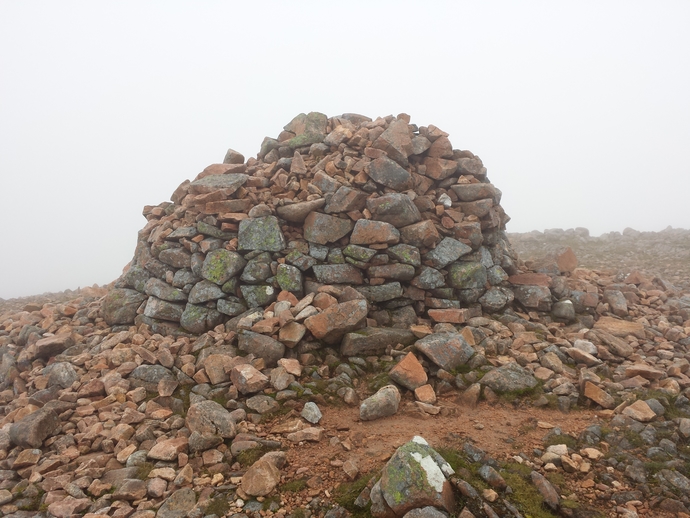 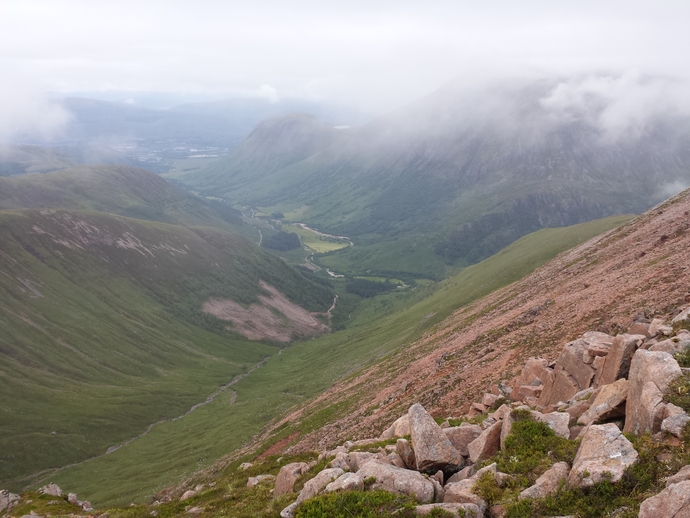 Achriabhach from approach to Stob Ban. I ascended up through the felled trees just to the left of centre 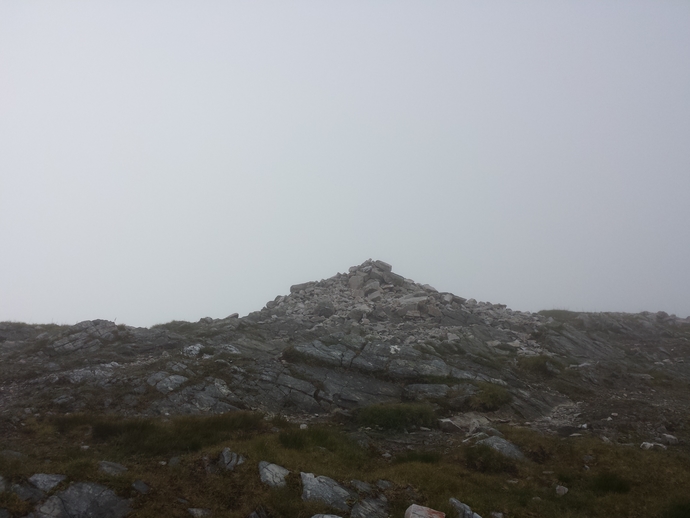 Descended slightly awry for a minute before realising and taking the right direction off towards Lochan Coire nam Miseach. Met first person of the day here. Had some water straight from the loch outflow, then ascended the zig zag stalkers path to gain the Devil's Ridge. Clag lifted by now, no wind, giving perfect walking on the exposed arete before topping Sgurr a'Mhaim at 11am. Ben Nevis top just in the clouds. 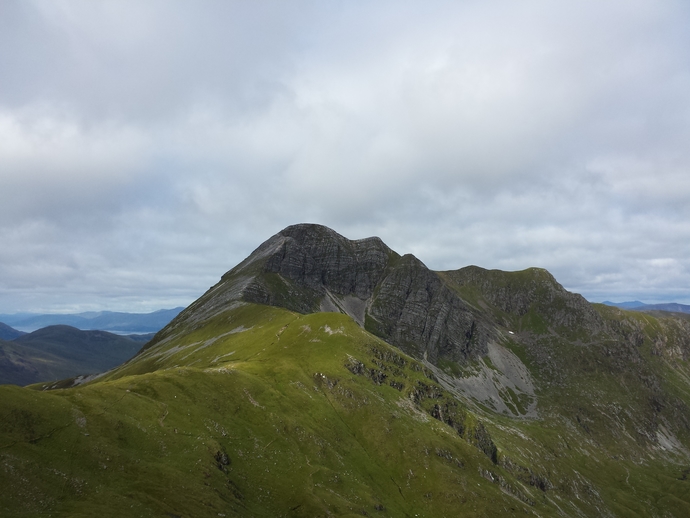 Stob Ban from the South of the Devils Ridge 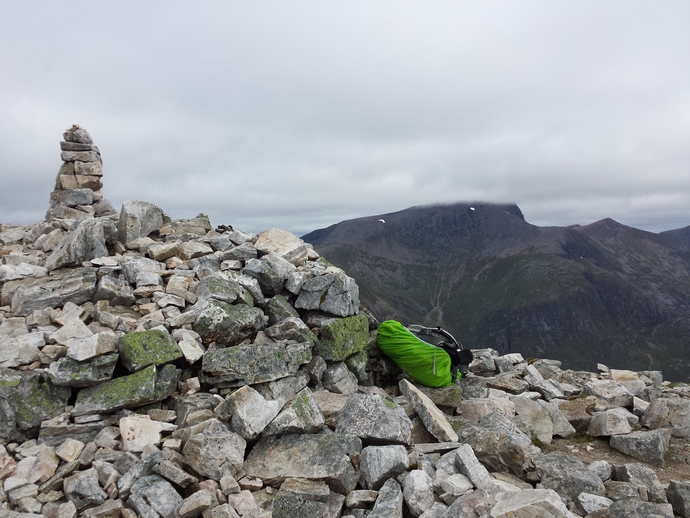 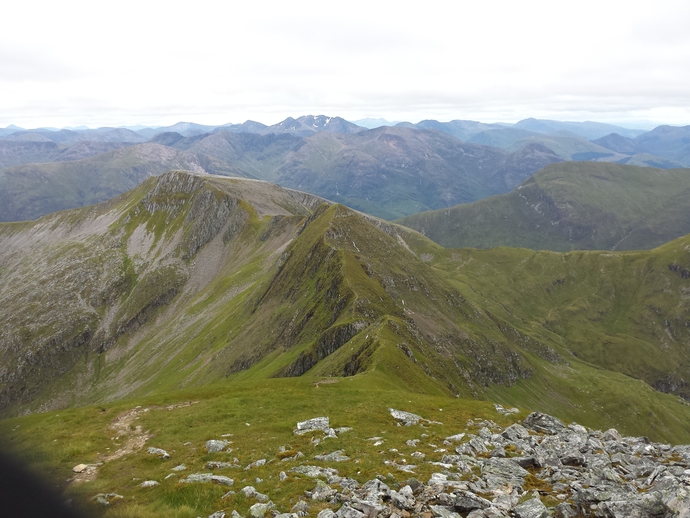 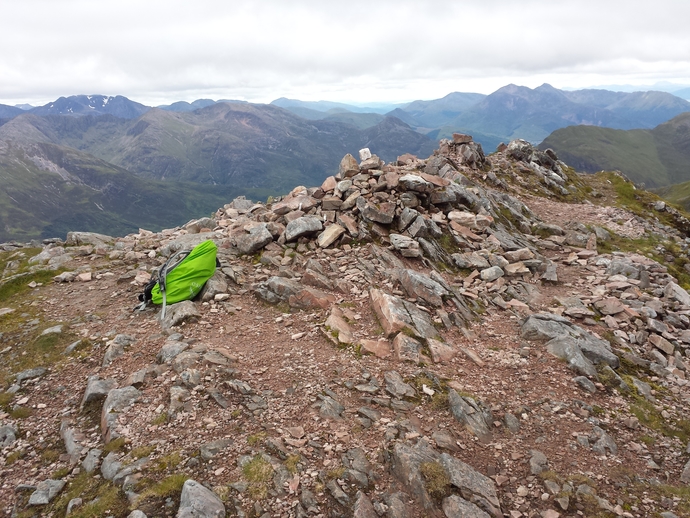 Nice easy pull up Am Bodach (12.45pm) after coming back along the Devil's Ridge. Very steep descent off towards Stob Coire a'Chairn where I met a young German couple. Also met a father and his son and then an older couple on SCaC. Steep descent to the North then dumped the bag since I'd be coming back after An Gearanach. Met 5 young guys about my age who turned to me and asked where we were! Thankfully a guy who'd compleated the munros came up at that point and said he'd take them over the next few hills and back to the valley floor allowing me to continue towards my goal of all 10. 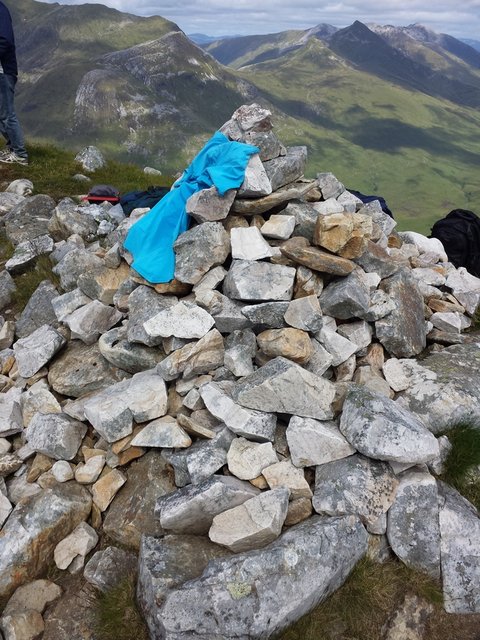 Having retrieved my gear I made directly for the 783 point at the bealach. Hit my physical wall here and struggled up this ascent not helped by thinking I'd reached the 7th munro before realising it was a little further on. Na Gruagaichean at 16.50. Reasonably easy walk along the ridge towards Binnein Mor, my first 1100+m hill, for 17.50. 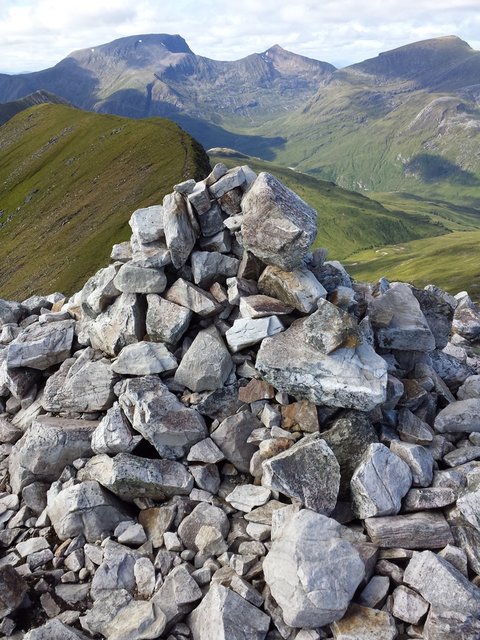 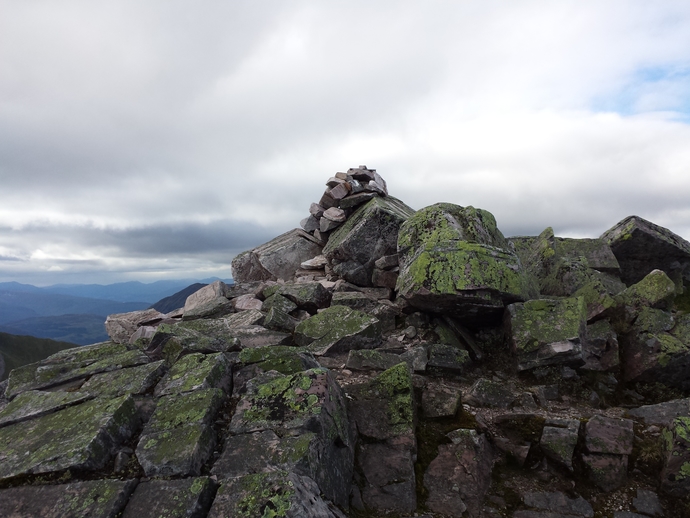 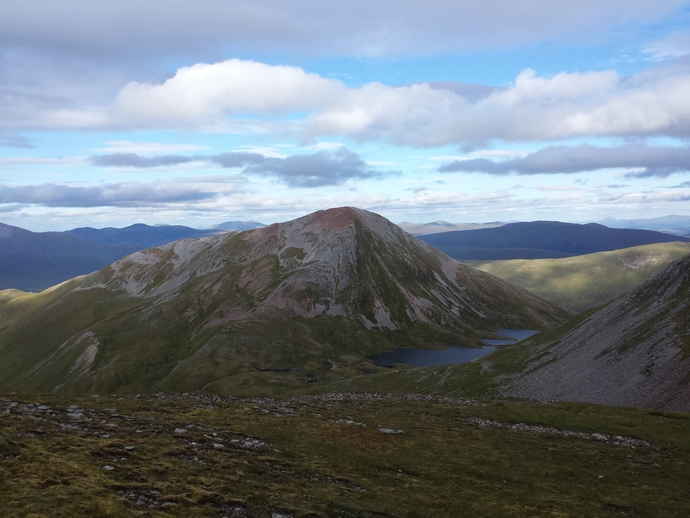 Backtracked over the 1062 point and then an extremely steep initial descent to the west of Coire an Lochan. Took the opportunity to drink half a litre straight from the loch and fill my bottles up. Had a couple of horrible SIS energy gels here. Could see 5 or 6 guys camping at the eastern end of the loch. Nice place for as there were no midges to speak of. 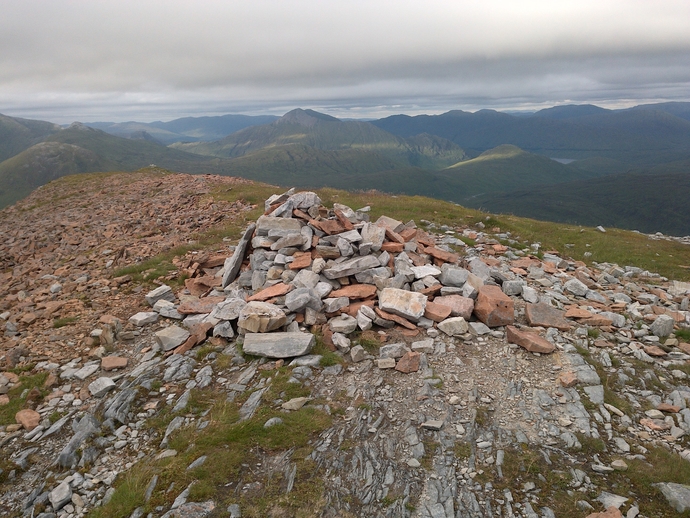 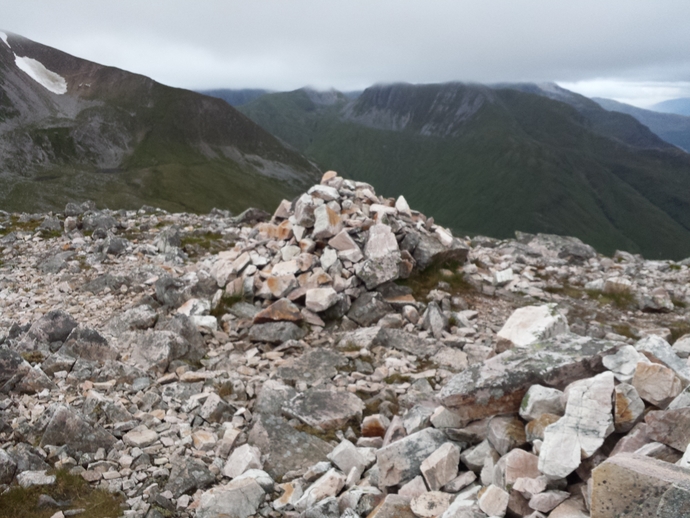 Ascent of Sgurr Eilde Mor was a horrible scree slope on really tired legs that had already climbed almost 3000m. Summit gained about 7.30pm. Back down then followed stalkers path to Binnein Beag. At this point my legs felt fine and climbed this last 200m without stopping for a 9pm summit. Sense of achievement here was immense. Ate pretty much my last food here as I descended to the West making the decision to avoid trying to find the marked path as felt it would be too hard to find for the benefit it would give.

Just reached the bottom of Glen Nevis at last light. Thankful for the low river level so I could just hop across some stones, stopping for a large drink. I had been counting on the Glen path being dry and easily visible in the head torch light. This wasn't to be and spent the next hour plodding along through endless bog meaning it took a bit longer than expected. Passed Steall Falls, couldn't see it at all but could definitely hear it. Last few km's along the road to the car were done in auto mode, one foot in front of the other. Reached the car just after midnight.

Got a few hours sleep in the car before leaving Glen Nevis and the drove through Glen Coe at dawn on the way home to Perth. Slightly shamefully haven't yet been back to climb any of them a year later.

Weirdly my legs felt absolutely fine the next day

That's a great achievement. Definitely on my to-do list.

Just reading that left me breathless - congratulations, what an achievement

Isn't it really annoying to encounter folk on the tops who've no idea where they are, especially in clear visibility?

Respect to anyone who manages all 10 in a day.

Ooof! Big day! Knowing the fiddly terrain between Binnein Beag and Sgurr Eilde Mor I think I would have preferred to do the route in reverse, but I guess you wouldn't want to be descending through that forest on MnC at 9pm!

Great report, and a great route! Glad you had good weather for it too. I've already cancelled a couple of planned goes at it this year because of bad weather forecasts; but having looked across at it from the North side of Glen Nevis, I'm determined not to do it in anything but good weather.

That trudge in the bog down Glen Nevis is truly dreadful! So I'm planning to do the round from Kinlochleven...

Ooh I love an epic, nice one!

Definitely one for a good day

This is definitely one that's on my list!!! Great report as well.

Users browsing this forum: No registered users and 127 guests