This has been the trip I've been planning for ages. Basically, since climbing Sgor Gaoith and Mullach Clach a' Bhlair back in 2010. Cairn Toul looked so close, so tempting, that I simply couldn't resist thinking, well maybe we could do it from Feshie side.

It took us six years to eventually get there

mainly because there was always something else to do, other hills, other ambitions, and weather was often an issue as well. Cairn Toul circuit from Feshie is a long walk, over 35km, and we didn't want to do it on a miserable day, especially when low cloud makes navigation tricky on the plateau. We actually climbed everything else in the Cairngorms before finally reaching the top of this ridge!

Three months ago we had another good look at Moine Mhor approach, when climbing Beinn Bhrotain and Monadh Mor. A long trudge, but not impossible. For us, living on the Spey side of the Cairngorms, Glen Feshie was logistically the best starting point anyway. We didn't have to include Braeriach (which we climbed on its own from Sugar Bowl car park a few years back) so our traverse would look as follows: up the plateau from Glen Feshie, across Moine Mhor, to Angel's Peak first, traverse along the ridge to Cairn Toul and further on to Devil's Point, then back, possibly contouring around Stob Coire an t-Saighdeir to avoid too much reascending. It worked as we planned and I must say, this is a good route for this particular trio. Maybe avoid it in wet weather, but on a clear, dry day we took just over 11 hours, and that with me limping in pain on the final descent (knees again!).

Track_DEVILS POINT 27-08-16.gpx Open full screen  NB: Walkhighlands is not responsible for the accuracy of gpx files in users posts
The final weekend of August, with days getting shorter, we knew this was probably our last chance to grab Angels and Demons this year, so we went for it without much thinking. Forecast was good: low winds and high cloud, not too hot plus it hasn't rained for a week or so, so underfoot conditions on the plateau shouldn't be too bad.
The car park in Glen Feshie was midge-infested, nothing surprising here

We had a chat and a wee laugh with another couple, preparing for the ascent of Gaoith/Mullach route. Deet was used in large amounts before we set off.
I love the way Scottish mountains look in late August, with purple heather adding lovely colours to the landscape: We calculated we had about 12.5 hours of daylight so it should be enough to do the circuit, but we carried torches just in case. There was some high cloud over the more distant peaks, but we hoped to see some good views from our planned Munros.
Looking down to Glen Feshie from the excellent path up Carn Ban Mor: We wanted to be high on the plateau as soon as possible, to leave more time for the traverse itself, so we marched up at crazy speed (crazy from my perspective)... 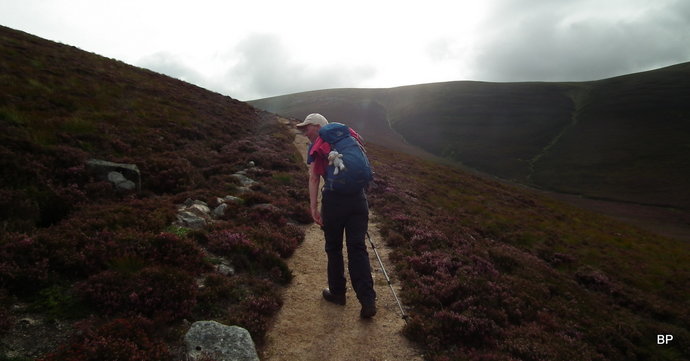 It hurt, but I kept telling myself, once up on the plateau, it would be much easier.
I was a bit disappointed to see Angels and Demons hidden in cloud at this moment, but it was still early and the clag might lift off the tops:

We didn't waste time, but marched on, first on a path, then on a good track descending towards Allt Sgairnich:

The stream was low so we hopped over to the other side and climbed a short distance onto the wide glen of Allt Luinneag. Because we were aiming for Sgor an Lochan Uaine, we didn't have to cross the river. We were now facing over 2km of walking on flat, boggy terrain, but luckily, most of the bog was dry and only occasionally we had to take detours to avoid swampy sections. Midges were more a nuisance than bog, to be honest.
The way forward:

Having crossed the flat area and a couple of streams, we began the uneventful 350m ascent up the western shoulder of Sgor an Lochan Uaine. Lower down the slopes are grassy, higher up more bouldery. We even found a faint path at some point, proving that we were not pioneers here

The cloud has now lifted off the summits and having gained some height, we were surprised by this lovely view back to Monadh Mhor and the hidden loch, Loch Stuirteag: But sadly, a lazy picnic on the summit of Angel's Peak was not to be, as we were attacked by midges again, they were without mercy today, sucking dry everything that moved! A large group of walkers arrived a few minutes later from Braeriach side and they also fought a losing battle with the wee blood sucking army!
Kevin's lunch: midge flavoured ham sandwich Despite the wee b*&^%$s around, I couldn't resist exploring the summit area. The views are fantastic, especially across the big gap of Lairig Ghru: 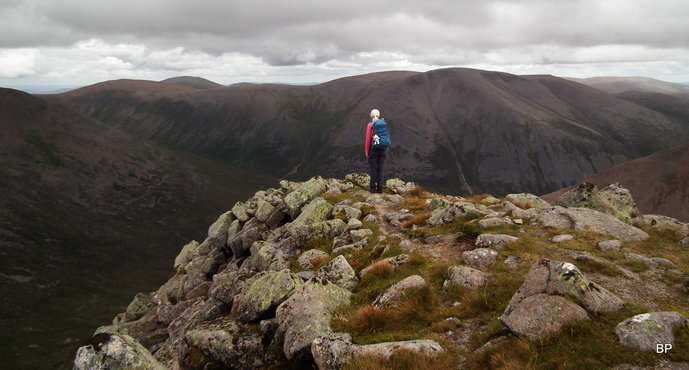 The way we came from, the track over Moine Mhor looking so distant...

Ben McDhui and Lochan Uaine at our feet: DSCF7369 by Ewa Dalziel, on Flickr
From Angel's peak it's only a short climb to Cairn Toul, the slope is steep and rather rocky, but we enjoyed it: We didn't stop for long on this Munro, just a few minutes to rest and take photos. The summit was busy with people and insects Glad to be here at last!

Toul is a great viewpoint, too. The most interesting panorama is probably to the east, to McDhui and Carn a'Mhaim:

DSCF7383 by Ewa Dalziel, on Flickr
He is happy! 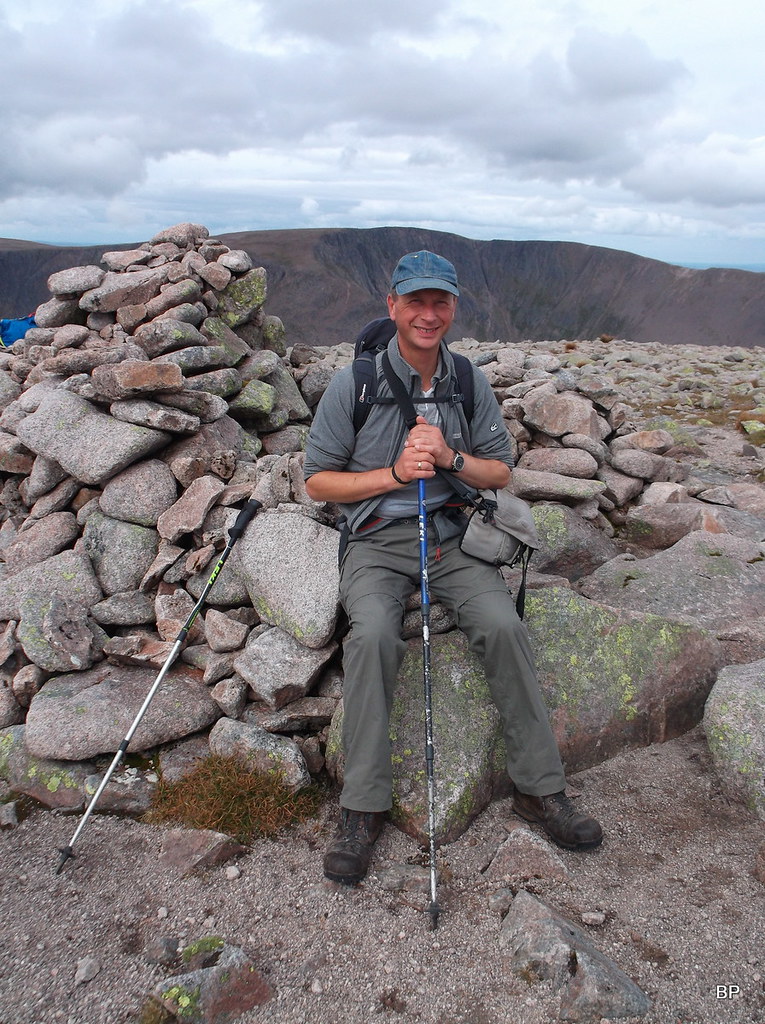 DSCF7385 by Ewa Dalziel, on Flickr
We walked along the ridge to the opposite end of the summit area, where there are some interesting views down to the southern end of Lairigh Ghru and Deeside: We spent some time here, filming and snapping photos: As we descended towards Stob Coire an t-Saighdeir, we met a nice couple, WH members (sorry guys, in all this I forgot to ask your names!) so we stopped for a chat. Not long after, we bumped into Maja (Mountainlove) and again took a break to talk. It's so nice to meet people on the hills, who recognize you and say "Hi BP, I read all your reports!"

Wish we could spent more time chatting and sharing memories with other walkers, but we still had one more Munro left to do, though it looked very tiny and insignificant compare to what we've climbed so far: The final climb to Devil's Point is less than 100m, surprising that it's even a Munro

Hardly a Munro, but what a viewpoint. Much lower than its giant neighbours, yet so steep on the eastern side, that looking down, one has the feeling of being in a plane! 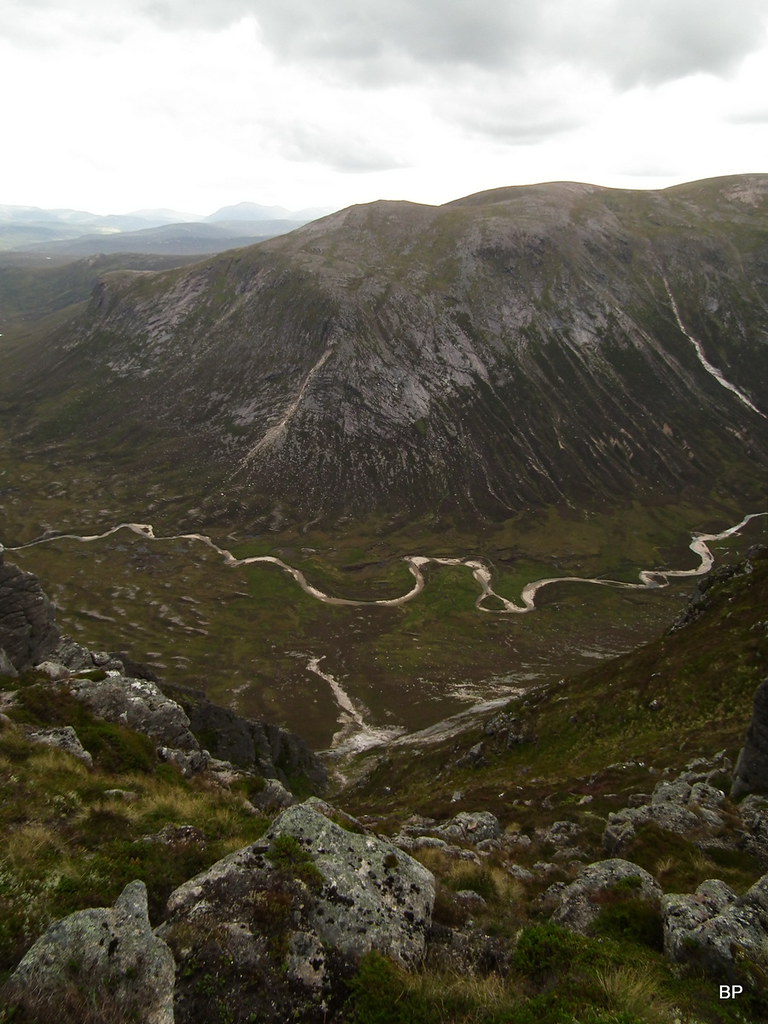 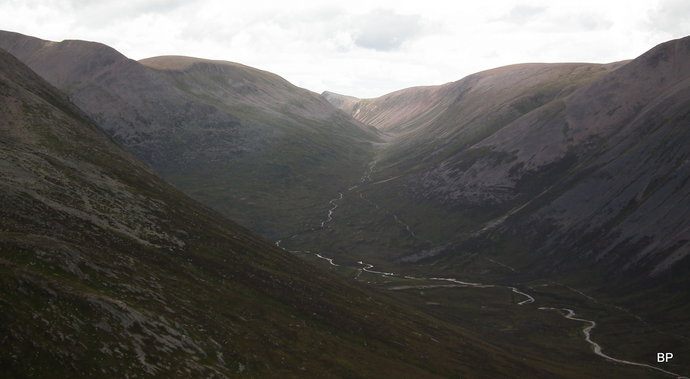 Midges were few and far between, possibly got scared by the demon?

At least I could hold my camera steady when taking panoramic photos:

After well deserved rest on the summit, we discussed options for return route. Retracing steps over Cairn Toul seemed far too painful (especially for my dodgy knees) so we opted for contouring around Stob Coire an t-Saighdeir. Kevin studied the map and said, this should save us about 300m of reascent and possibly, a couple of hours time!
He Who Always Knows Everything Best 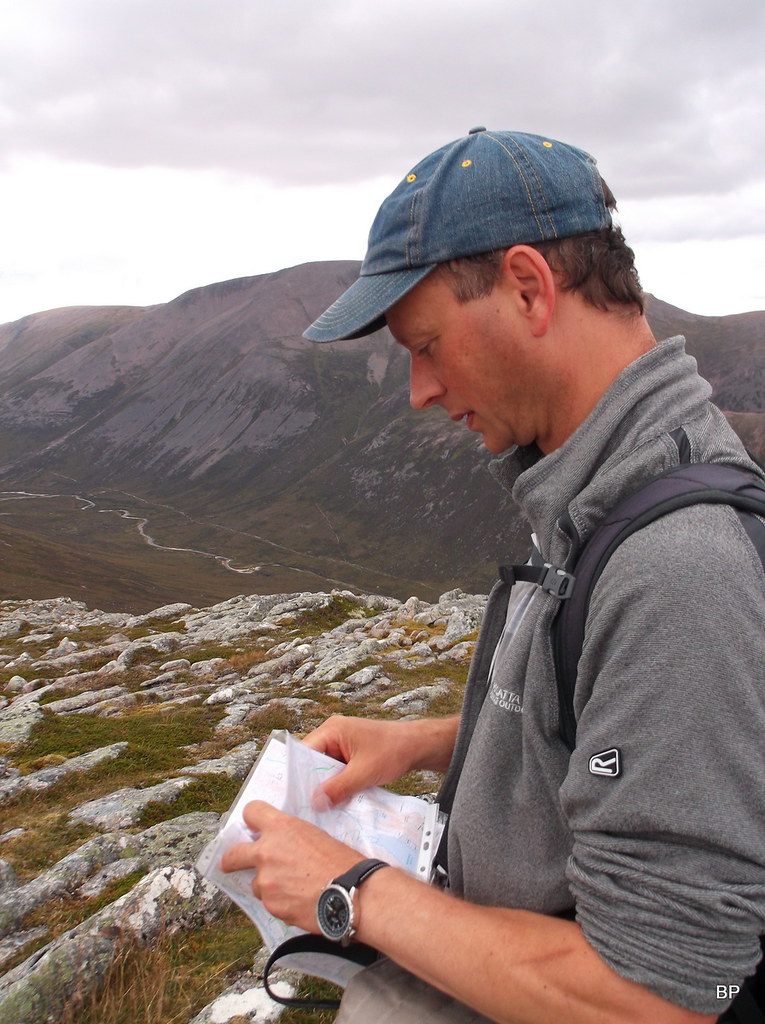 DSCF7410 by Ewa Dalziel, on Flickr
Having descended from Devil's Point, we headed uphill at an angle, after gaining about 100m in height, we started the level traversing high above Glen Geusachan. Going was very easy, low grass covered the slopes, the ground was dry, we were glad to have taken this shortcut rather than trudging back up Stob Coire an t-Saighdeir!
View back to the Devil:

As we turned into the high corrie below Cairn Toul, the ground turned rocky, so we dropped down a few metres and traversed below the line of scree (here the slope seen from across the glen):

A little re-ascent and we were now back on the western shoulder of Sgor an Lochan Uaine, ready to retrace our steps all the way back to Glen Feshie. I didn't fancy this part of the day in particular, but at least the ground was dry most of the time:

As we were passing by Loch nan Cnapan, another swarm of midges attacked us! Definitely, they are the worst I can remember since I started climbing almost a decade ago. Mild winters + wet summers = midge heaven!
The midge heaven (Sgorr Gaoith in the background):

Eventually, we reached the track and from now on going was much easier. I didn't really feel very tired at the moment, looking back at Angels and Demons I was happy to have finished the Cairngorm Munros and get to No. 199

The descent back to Glen Feshie proved a torture, with both knees in pain I had to slow down to snail's pace. But it was still a small price to pay for the day's pleasures

............
This is probably the shortest route for these three Munros - including Braeriach would add another 6km to the traverse and would probably be too much to walk in a single day.
..........
One more TR pending and this will be a special one, the round number coming!

That's quite a hike! Excellent photos, nice to see me old stamping ground. I'll go back when the midgies die off!

Lovely report and it was great meeting the two of you!! Thats quite a walk from Glen Feshie! Had originally played with the same idea but Braemar was the closest for me.

Enjoyed that indeed, and its great to have you map out an alternative route for us if we give up on the quest to do these as a backpacking trip

Enjoyed reading that as it brought back memories of doing Angel and Toul the same way as you did but stopped short of adding on the Devil!

You got much better views than we did as the cloud was down and the winds were horrendous - but that's another story!

Love your pictures. We did a similar route to Cairn Toul this time last year but missed out the Devils point as we didn't want to go back up Cairn Toul,

regret that now, especailly as we have spent the last year trying to work out the best route to the Devils point

. Looking at your route back perhaps we should try it from Glen Feshie again.

I was hoping to advertise this route up Angels & Demons - it's a nice approach. The Devil's Point is an awkward hill to climb from any direction, if you want to do it in a single day, but in the end, not as black as painted