Making a meal of it! - 8 in Glen Shiel the stupid way

Making a meal of it! - 8 in Glen Shiel the stupid way

New_Route (12).gpx Open full screen  NB: Walkhighlands is not responsible for the accuracy of gpx files in users posts

The plan for this weekend was delightfully simple in my head, drive to Glen Shiel on Friday night, wild camp close to Cluanie Inn. Next day we leave the tents, drive to the Malagan lay-by and then hike back to Cluanie over Faochag, Sgurr an Sgine and the Seven Sisters, back to our waiting tents and the pub! On the Sunday we could then walk from the tents, over the brothers on the north ridge, and descend back to the waiting car. Simple.

However, several things conspired against us, I hadn't explained this plan to my companion who objected to leaving his expensive tent at the roadside, exposed to the weather and passers-by. It was also windy and wet on the Friday night which resulted in a less than idyllic site, not one we really wanted to return to. Finally, the midgies were off the chart. I have never experienced anything like it. This lent a certain, shall we say, 'hastiness' to our decision making.

So on Saturday morning we thought, sod it, stuffed everything in our rucsacs and bolted for the car, pursued by a fog of midgies. We drove to Malagan and decided to simply hike back to Cluanie with our camping gear on our back.

I had hoped to 'enjoy' this long route without a rucsac full of camping gear, but despite heavy legs on some of the climbs (well, all of them basically after the initial brutal haul up Faochag) the heavy packs weren't really an issue. 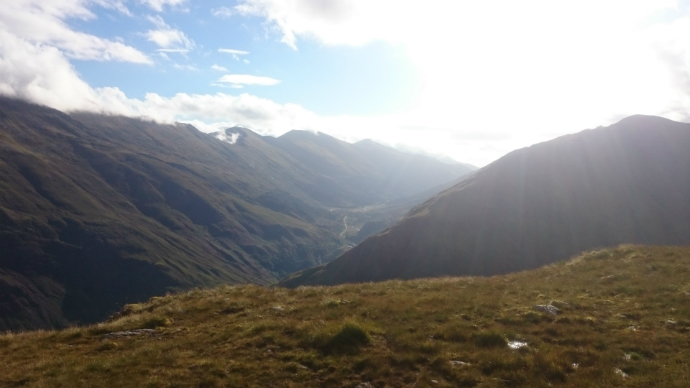 Looking up the Glen I had researched the ruined shelter on the climb to Creag nan Damh as a possible bivvy spot for a previous trip. With some clever tarp placement it looks like it could have been a nice wee spot! Almost worth a bivvy

Another aspect of my poor planning began to sink in as we hiked. Doing the route West to East meant starting at the lowest point and finishing at the highest = maximum climbing!

Hiking west to east also meant hiking with our backs to the best views, and our faces into the sun. In fairness it did mean that we would save the easiest day ('descending' from Cluanie back to the car over the Brothers) for our second day, when we were more tired. Last two in the distance Curtains of rain, still dry where we were Once back at the Cluanie we realised we had half an hour until the next bus to the bottom of the Glen, just enough time for a pint and a bowl of chips. We almost accosted a gentleman we had met at the start of the day for a lift down the glen but he managed to sneak out the back exit of the pub before we had a chance to ask him!

In the end the bus was running late and the only way to escape the midgies was to keep walking, so we ended up tramping halfway down the glen before a friendly German couple stopped to give us a lift, almost writing off their hire car in the process as they pulled into a layby and hit the mother of all potholes at what looked like 50mph

Finally we staggered back to the car, picked up the few remaining things we hadn't carried on our back all day anyway and dashed off to find a campsite. The midgies were so bad that we ended up sitting in the tents shouting to one another and eating crisps for dinner, not ideal!

Next day we couldn't face another day in the Glen so fled for some coastal hiking on Skye. Nothing elaborate but I finally got to cross the famous Bad Step I had heard that going too high on the Bad Step was worse than taking the proper scary traverse, so I took the lowest of the likely looking routes which rapidly petered out to a scary looking overhang with a big splashy looking landing which I didn't fancy. I returned dejected thinking I had failed at the famous bad step until I saw a much easier looking line immediately above. Success! 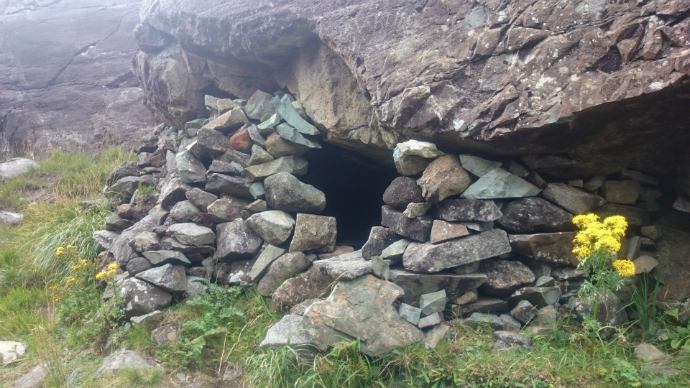 After taking in the sights of the corrie we took a detour up and over Sgurr Haim before returning to the car. I was hooked on Skye and will be returning in a couple of weeks for the Skye trail proper

Re: Making a meal of it! - 8 in Glen Shiel the stupid way

Wow, I admire your persistence in the face of the beastie onslaught!

The South Cluanie ridge is a great day out (and if you use a bike, it's even easier!).

And Skye is just Skye - the best!