2016-09-10_Honister to G Gable.gpx Open full screen  NB: Walkhighlands is not responsible for the accuracy of gpx files in users posts

I managed to persuade Chris, Andrew and Alastair along with my old boss John to join me for this walk starting at Honister. The forecast was promising a dry day, if not wall to wall blue skies, so, in my world I was hopeful of getting some views. 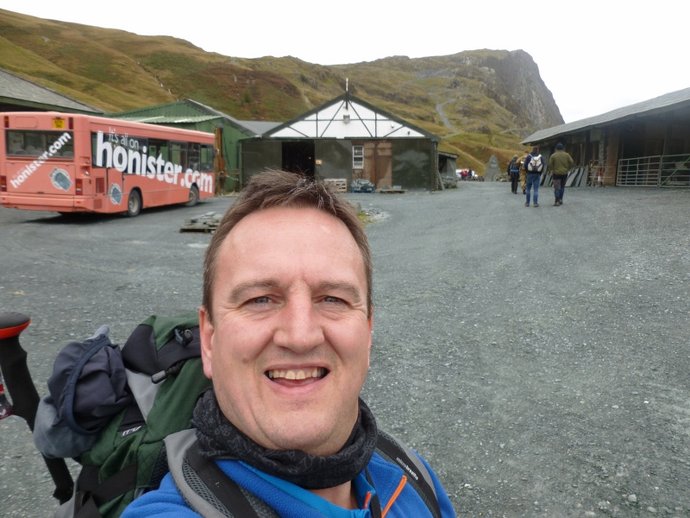 Quick selfie before the off....

Booted and away by 10am. Our route was to lead us almost directly up the north side of Grey Knotts, following the course of a wire fence to (almost) the summit. We had good all-round views and it was a pleasure to be able to identify other local and distant hills, as well as the path to our next hill, Brandreth. 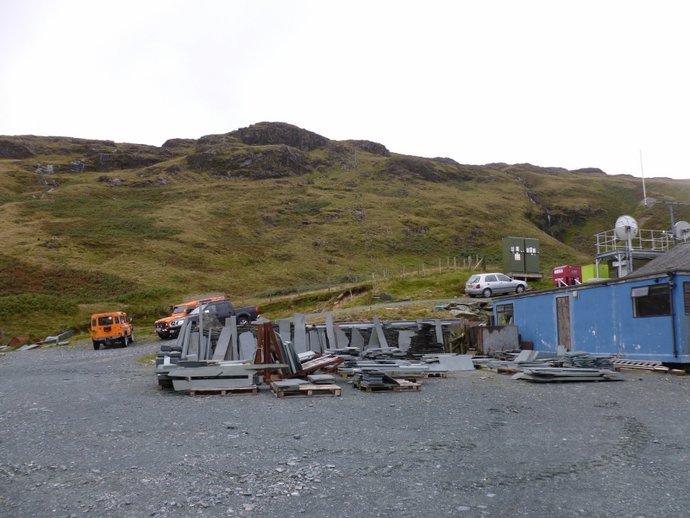 The northern slope of Grey Knotts 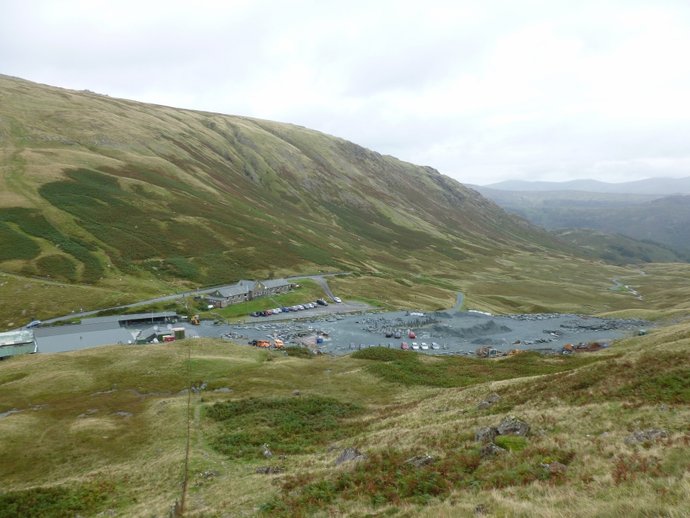 Looking back to Honister 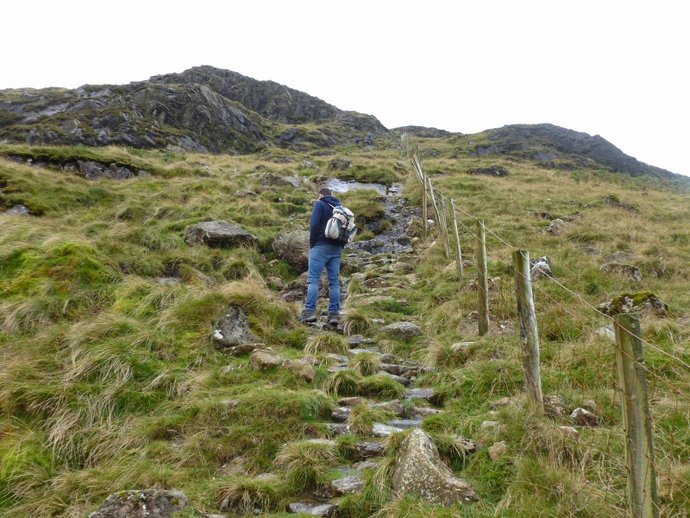 Andrew contemplating the path while we have a breather.. 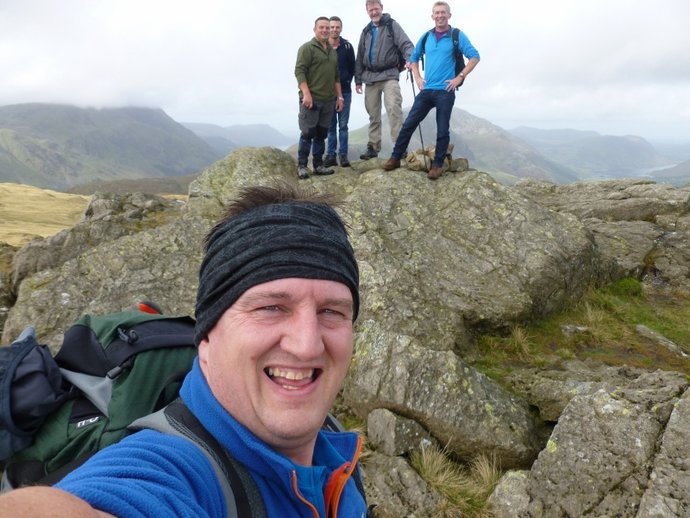 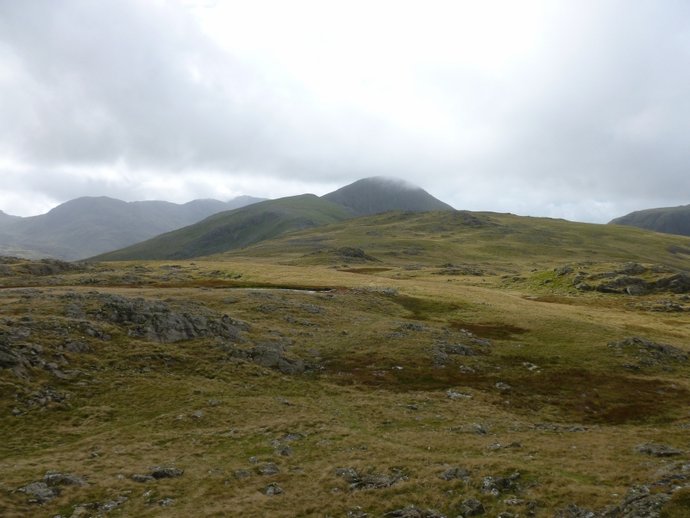 The broad ridge to Brandreth and the two Gables

Brandreth is effectively a raised area of ground on a broad ridge. It doesn't possess an easily identifiable summit cairn but several which may be either higher or lower than the others. To make sure, I visited each of them, which i think John found quite amusing 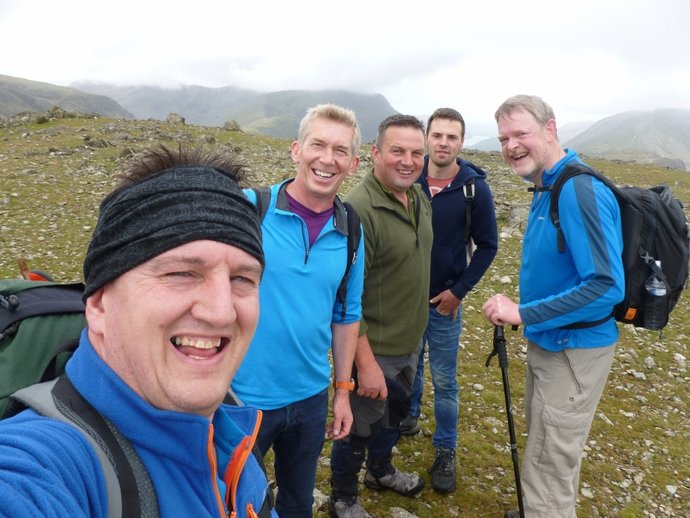 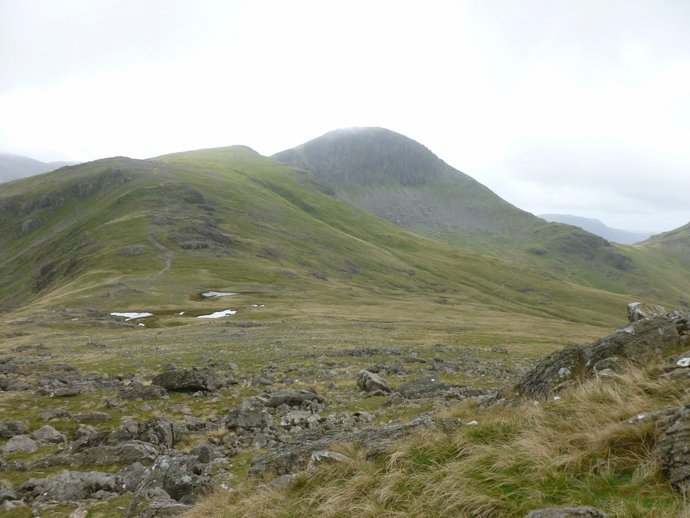 The obligatory summit photos taken, we now headed off along the path towards the slopes of Green Gable with the intention of heading out and back to Base Brown. However, taking a look at the amount of ascent and descent involved in this maneuver, we decided on a little detour by following the contour of the ground around the head of Gillercomb and eventually meeting the path that rises from Seathwaite. Although it was a little harder on the feet and ankles, it was a small price to pay for saving some energy. 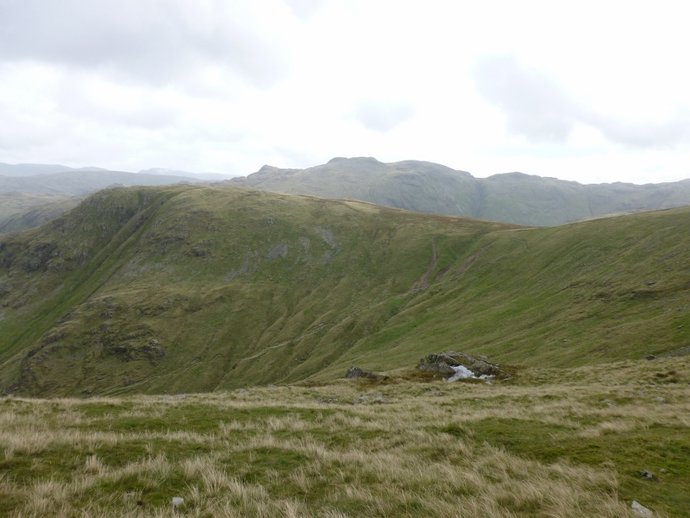 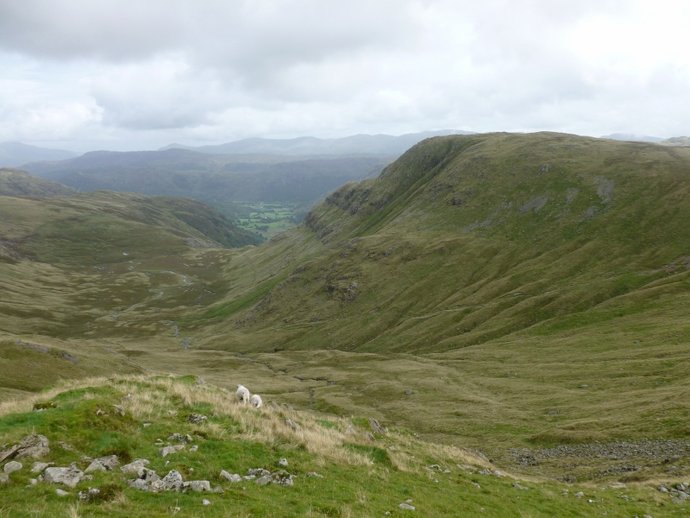 Before long we were at the top of Base Brown and decided now was a good time to have some lunch whilst enjoying views to Glaramara and beyond. 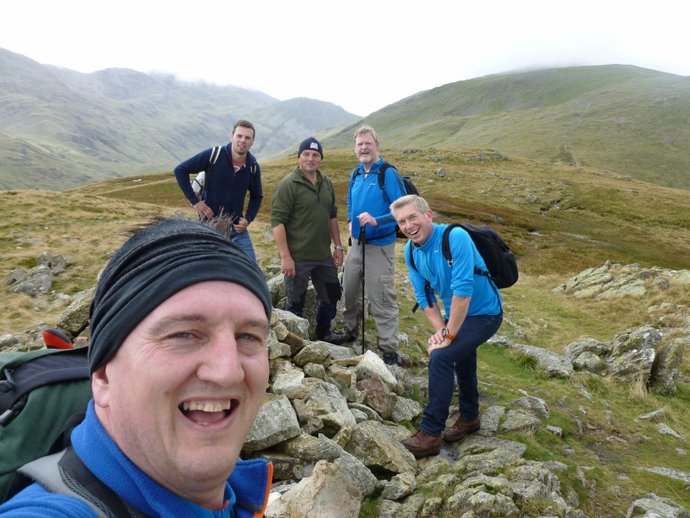 Base Brown ticked off!

Our next target was Green Gable. It soon became evident that Andrew and Chris had digested their lunch a bit quicker than the remaining three mortals and duly headed up to Green Gable without a care

We soldiered on as best we could and soon met them at the summit, a great place to view the northern cliffs of Great Gable. It was also at this point that I realised popularity of Great Gable with the number of other walkers seemingly multiplied and converging on its slopes from every conceivable path. 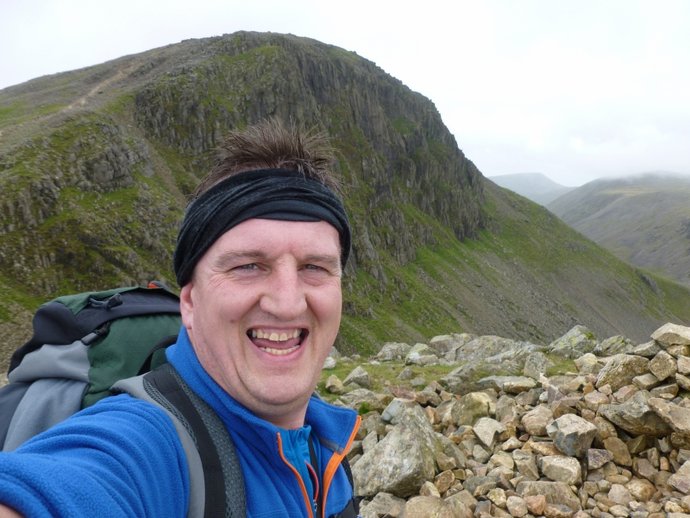 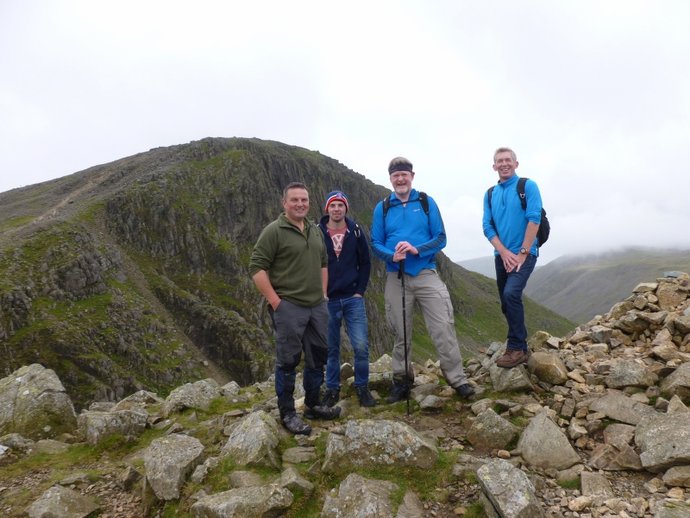 ...and the others with Great Gable backdrop

So without further ado, we headed down to Windy Gap and then did battle with the rocks and scree up to the summit of Great Gable. Typical of so many of my walks, as I reached the summit, a certain amount of cloud rolled in and prevented un-broken views. Nevertheless, the feeling of achievement was still high and soon after leaving the top we regained sight of the surrounding landscape. 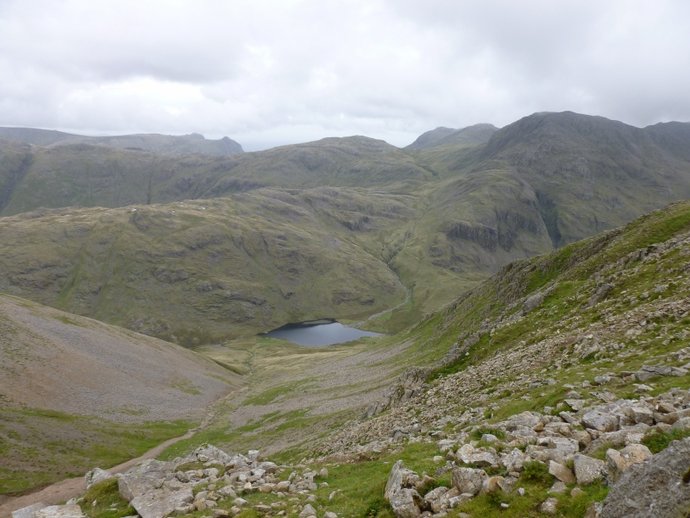 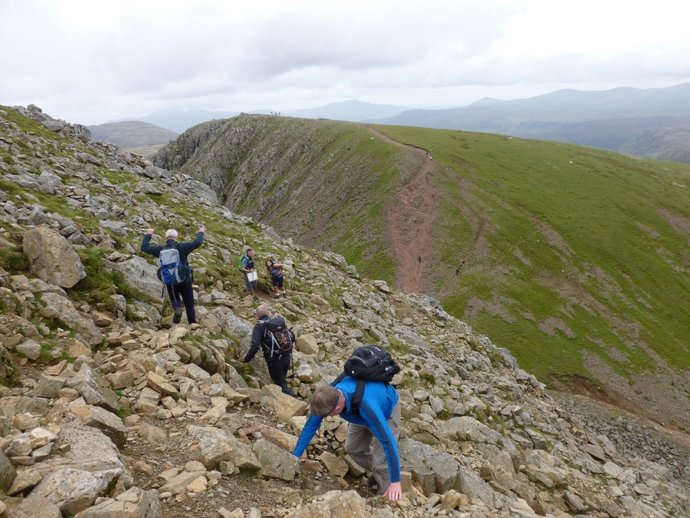 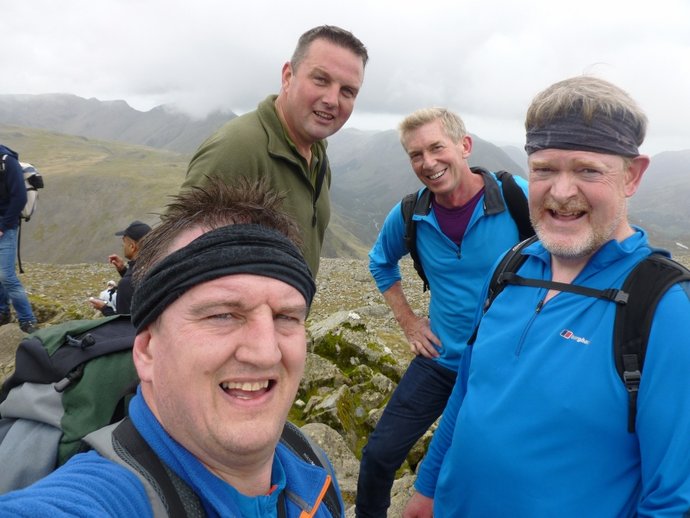 My original plan was to return to Windy Gap and then descend to pick up Moses Trod, however, we decided to head north west from the summit taking the steep and craggy path in the direction of Kirk Fell/Ennerdale and then veering off into Stone Cove below Gable Crag. We had great fun coming down a scree chute and impressed ourselves when we looked back to see where we had come down. 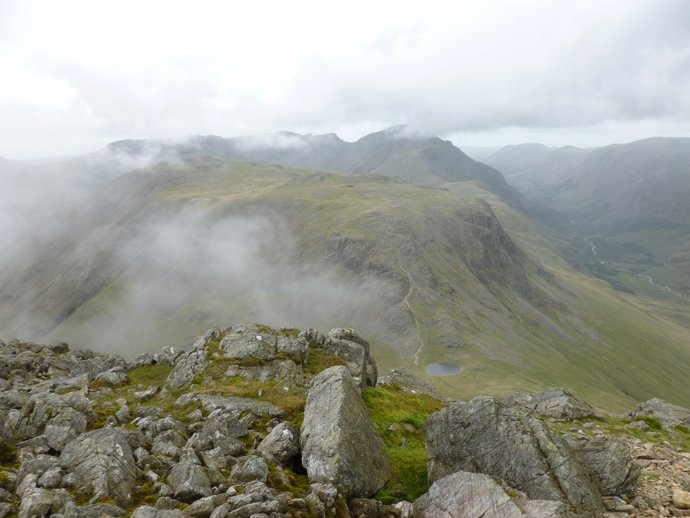 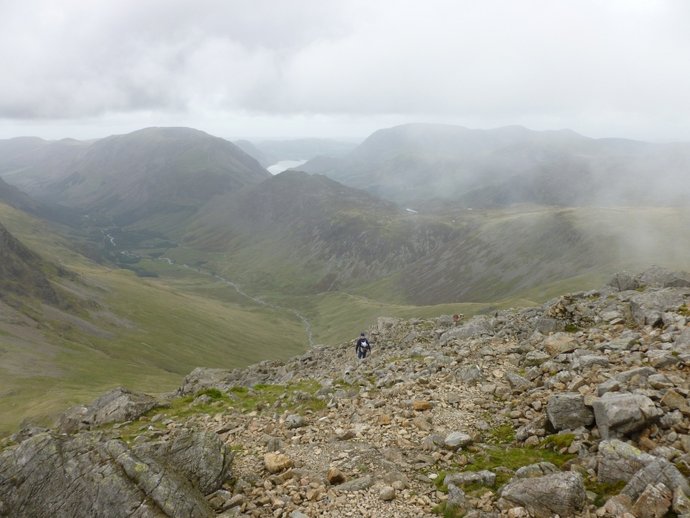 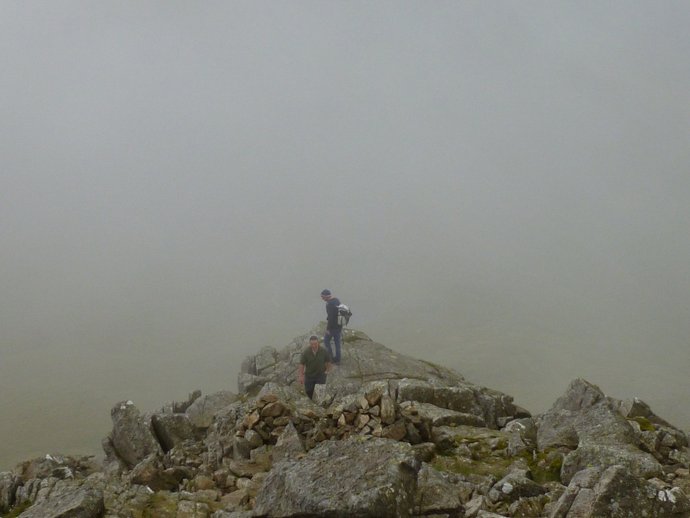 Looking down into oblivion! 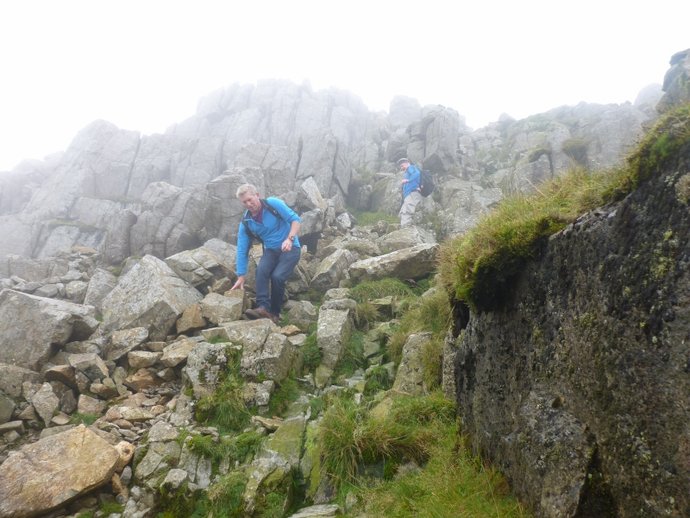 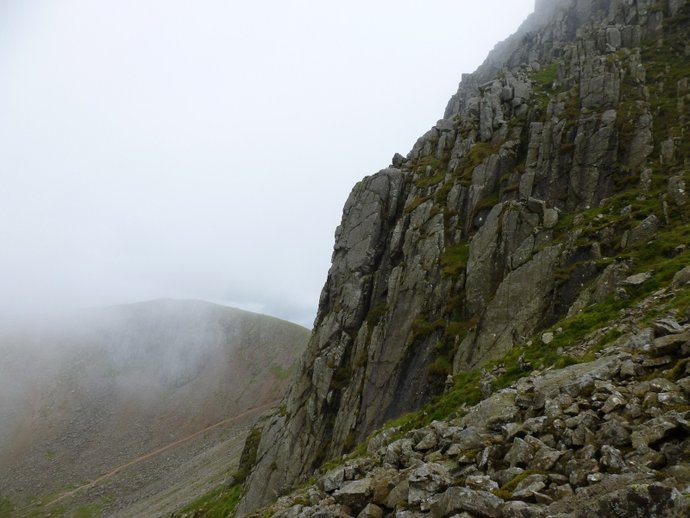 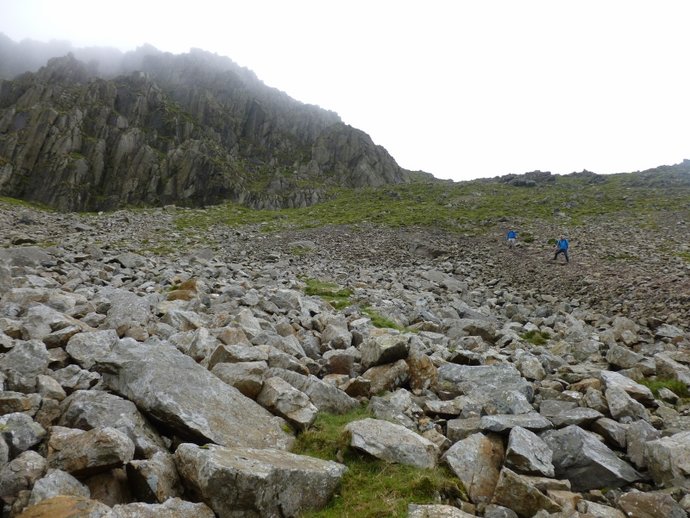 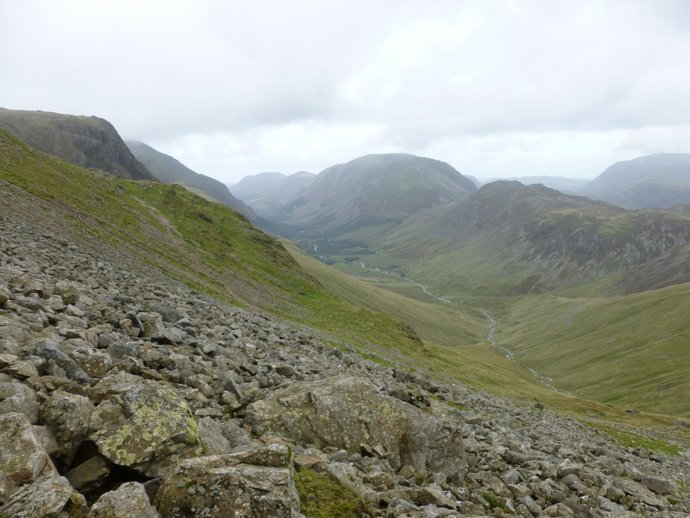 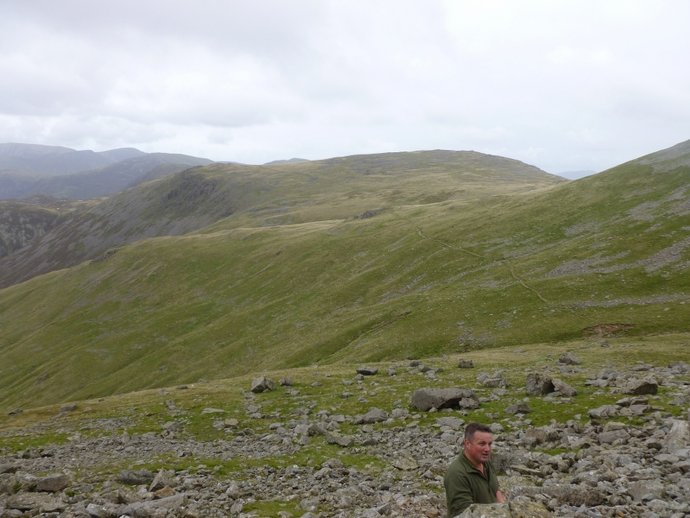 A view of our route home along Moses Trod

As we reached the Tramway path, the three stragglers (Al, John and I

) stopped for another drink as the sun was out and it was getting warm. I took off my rucksack and placed it on the ground only to discover that I had lost one of my newly acquired Leki walking poles from the back of the pack.

It my have become dislodged descending the scree or on Moses Trod but whoever finds it will have gained a brand new pole and I hope it serves them well.

We finally caught up with Chris and Andrew and then dropped down into Honister and enjoyed a cup of tea and cake from the cafe, sat in the sunshine, overlooking the road as both cars and cyclists negotiated the steep gradient from Buttermere. A lovely ending to a really enjoyable day in the hills. Thanks to all for being such good company.

Re: Honister to Great Gable

Great stuff MR, you guys look to be having the time of your lives in those pics

, the guy on the right of the Grey Knotts Summit shot looks unflappable throughout....when I've been walking for 1/2 an hour I look like a sack of spuds tied up loose

Sickening about the walking pole, those Lekis aren't cheap either...I have a cupboard full of single poles who's twins are scattered at various locations in the Canadian Rockies