The plan for Thursday had been to head down to the Oa peninsula and check out the American Monument. But the weather was so good that we headed to the north side of the peninsula instead for a slightly longer walk.


soldiers-rock.gpx Open full screen  NB: Walkhighlands is not responsible for the accuracy of gpx files in users posts

The walk starts just to the south of Kintra Bay. The sand looked tempting, but the tide was quite far in and we planned to explore it at the end. 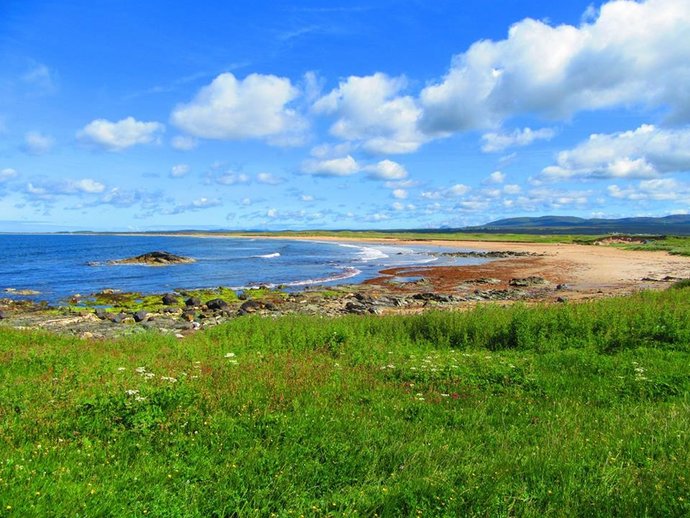 The track leads along the shore for a short distance before turning inland and fording a small stream. 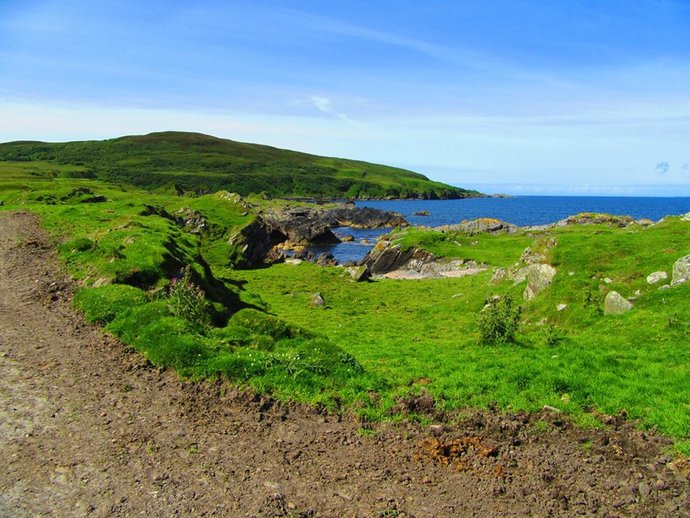 A long, gradual ascent follows, first south to a ruined house at Frachdale, then west onto a broad summit. Looking back, one of Jura's Paps began to peek out beyond the main body of Islay. 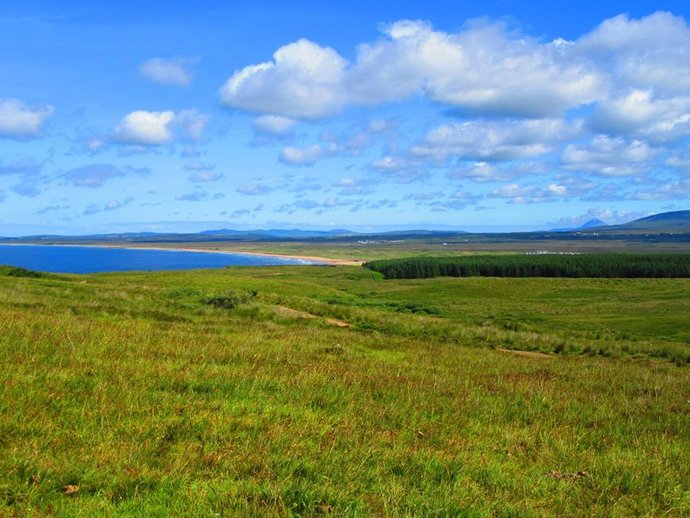 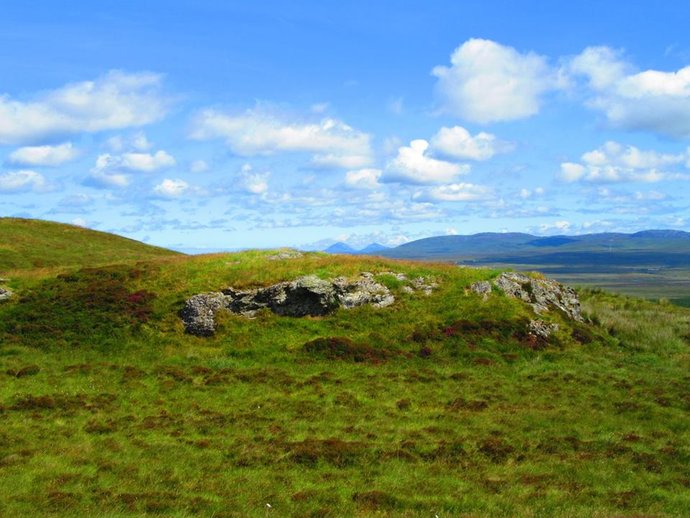 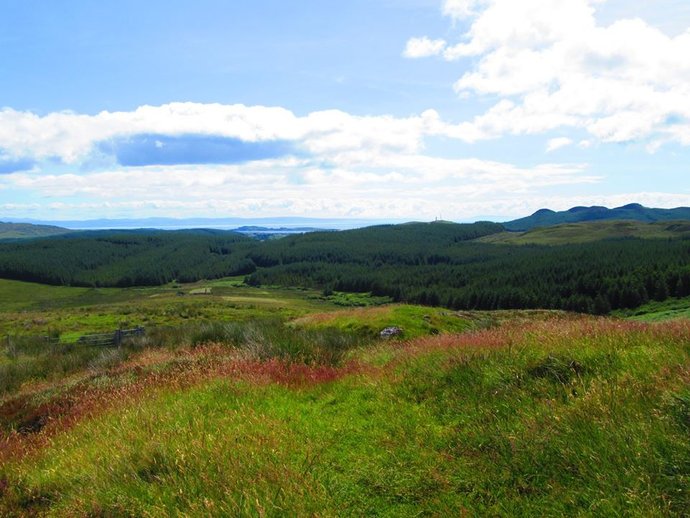 To be perfectly honest this wasn't the most interesting mile we'd walked this week, but it was a quick way of getting across the moorland. Soon the track faded to a decent path, with the scattered ruins of Grasdale appearing ahead. And the sea beyond... 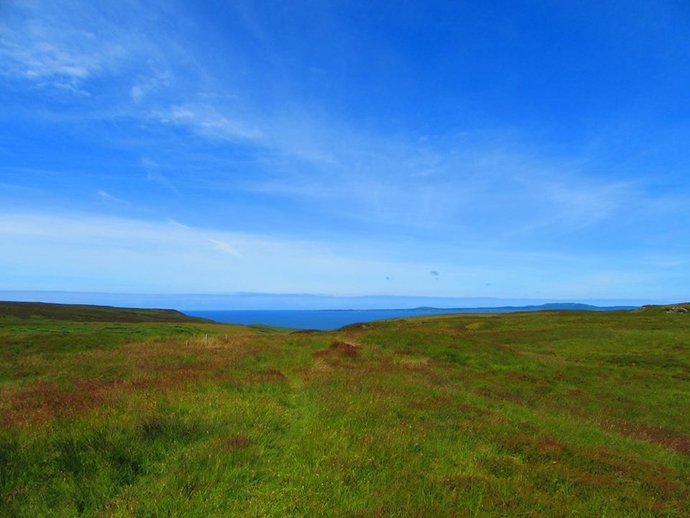 Grasdale was interesting but some of the ground around it was very boggy indeed. In fact, we had to make so many detours around swampy hollows that we ended up exploring much more of it than anticipated. 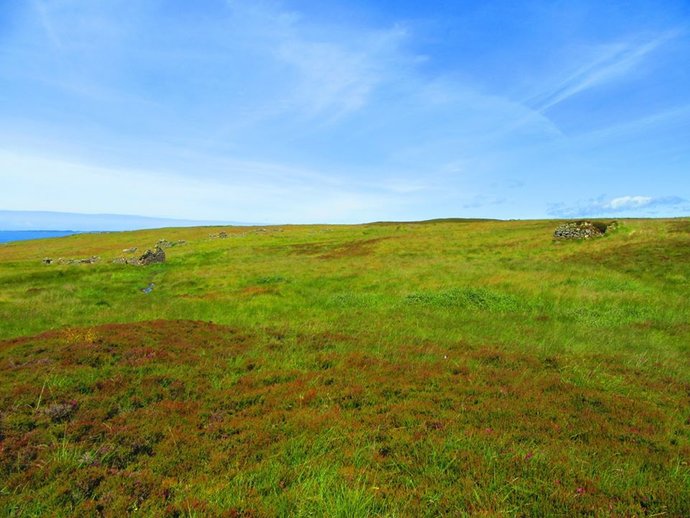 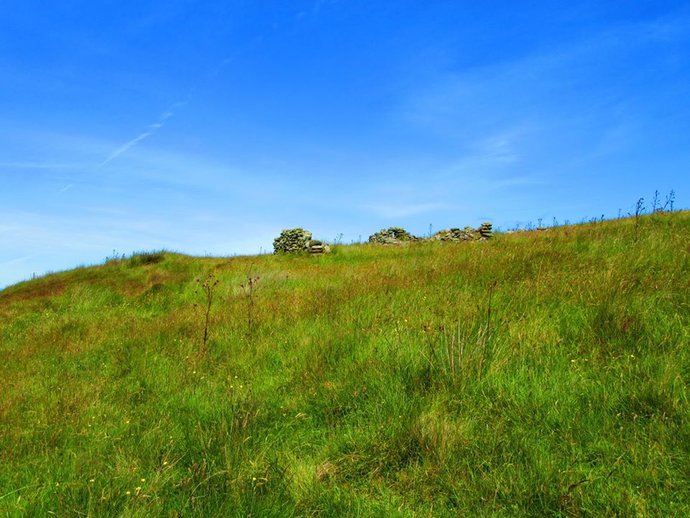 Beyond the first area of buildings it was generally (thankfully!) much drier underfoot, with various very faint paths - really little more than trampled grass - heading down the side of the glen towards the sea. The glen narrowed just before reaching the coast, and we crossed the burn just before it became too steep-sided as per walkhighlands' suggestion. Just before crossing: 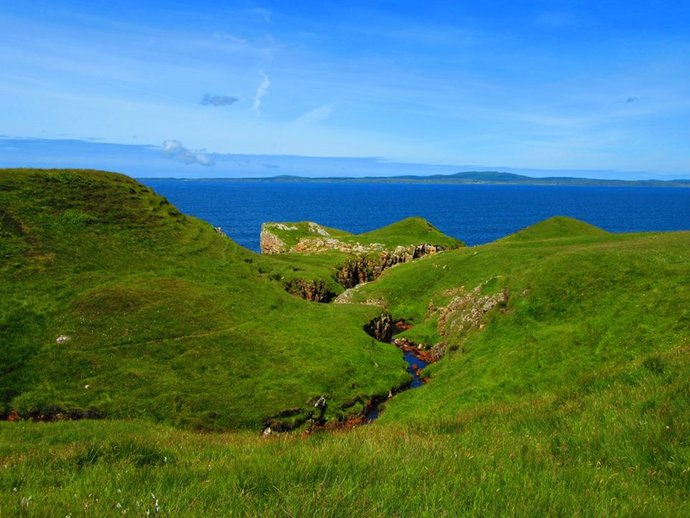 The coastline here is wonderful, and well worth the tramp across the hill from Kintra. The Soldier's Rock sea stack is the highlight... 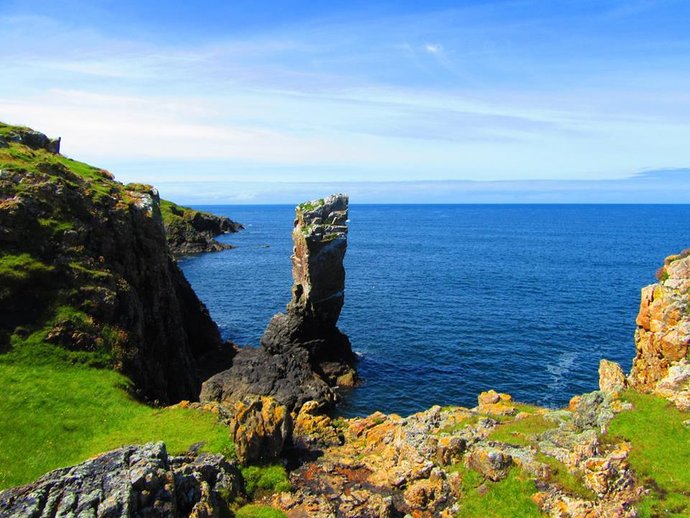 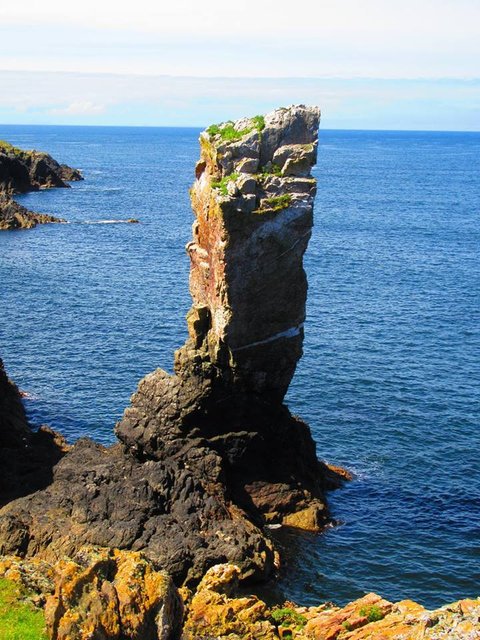 ...but the whole area is beautiful: 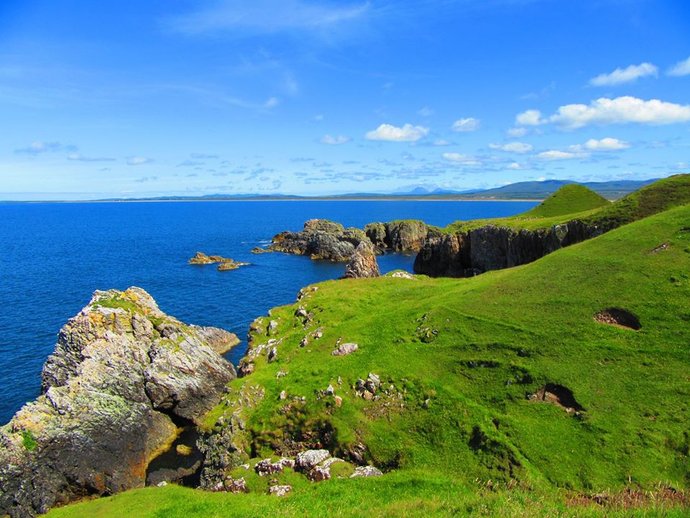 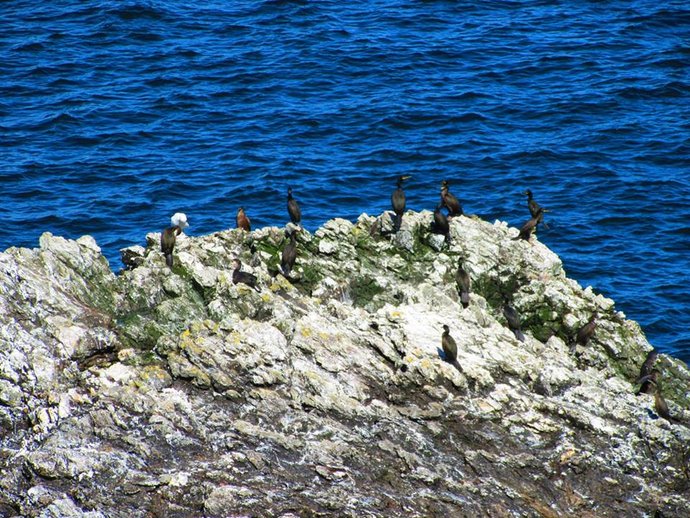 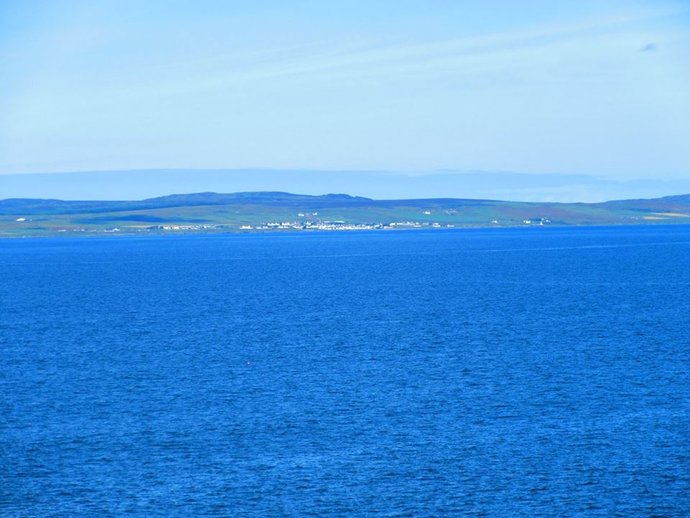 The burn we'd been following also falls into the sea with a spectacular waterfall, although the bright sunshine made it difficult to get a good photo. 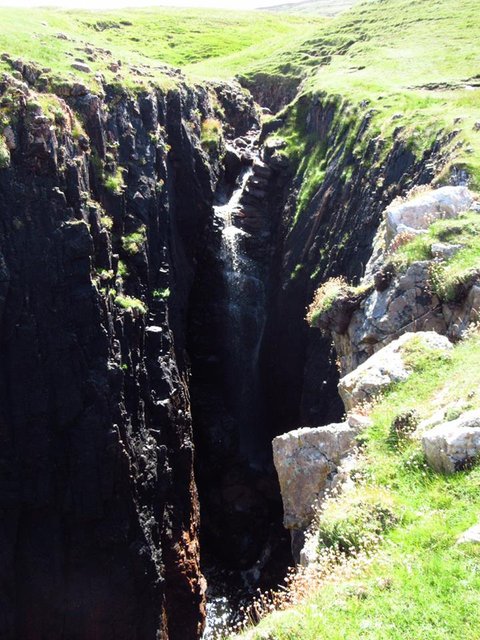 After lunch, we were expecting to go back upstream to our previous crossing point to continue the walk around the coast. However, the gorge below the waterfall narrows to a few-inch-wide crack which we could actually jump over - although this was slightly unnerving given the large drop just below. Beyond, we followed sheep paths close to the cliffs. 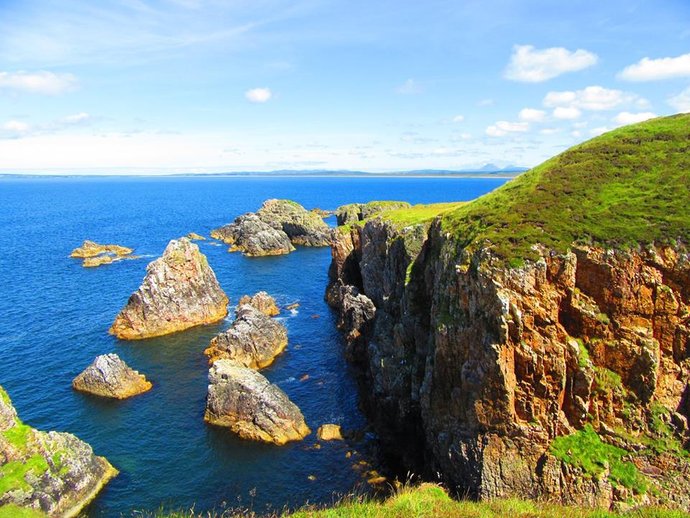 Although not this close: 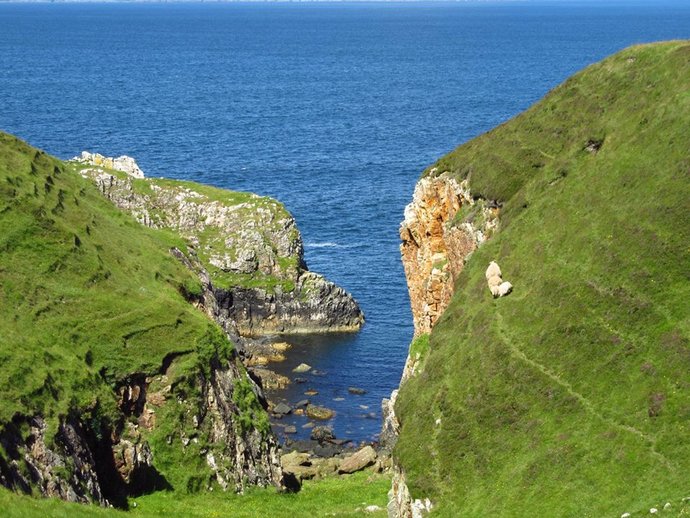 Paps of Jura (zoomed) free of cloud for once! 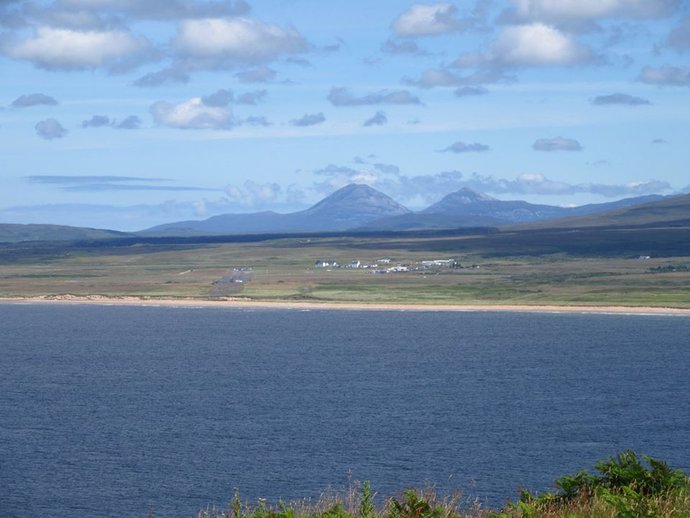 I hadn't been looking forward to the next section. The cliffs grew higher and more irregular, pushing us higher uphill, just as vegetation thickened with tall ferns and scrubby bushes. Fortunately the sheep tracks continued, without which this would have been very arduous. There were thousands (really!) of these colourful moths fluttering about - so many that it was impossible not to step on them, as they were also littering every bit of ground around. Very strange. 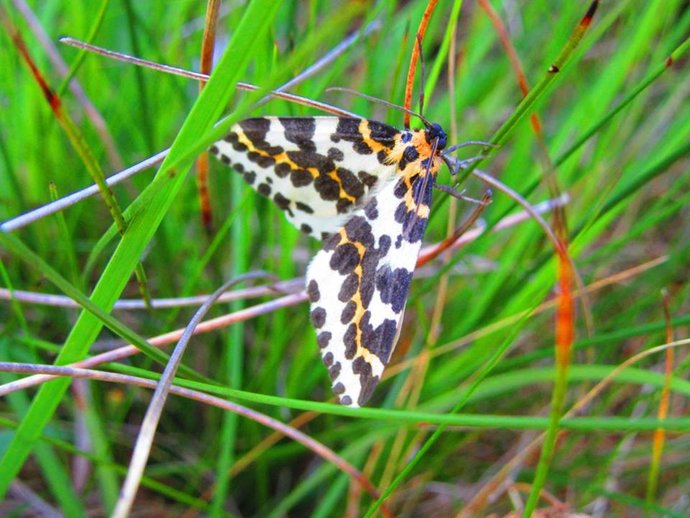 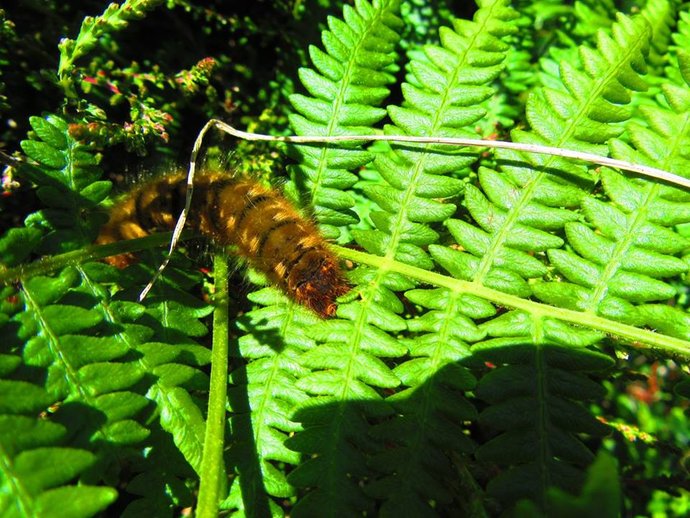 We were glad to reach the fence which marked the start of (temporarily) easier ground. You can head downhill to reach a gate, but the ground was quite steep and still covered in bracken around here so we crossed the fence directly to get to easier terrain on the other side. Within the fence were several wild (?) goats: 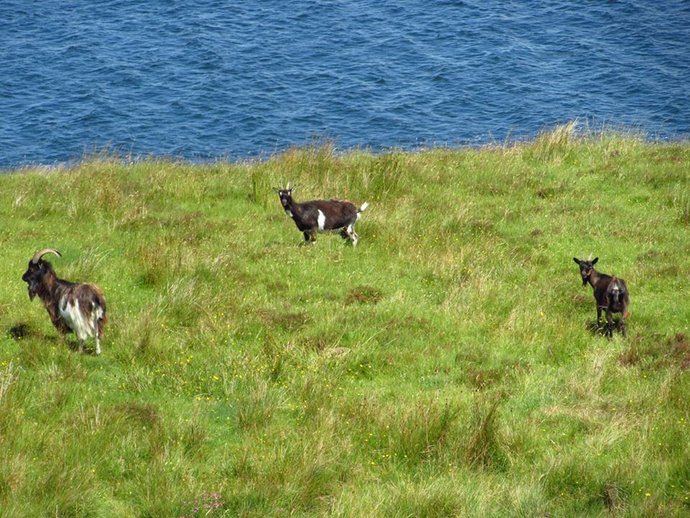 The open ground was punctuated by a couple of sections of gnarly old woodland. Cattle tracks lead through these - very muddy in places as expected, but the worst always avoidable by skirting the edges. 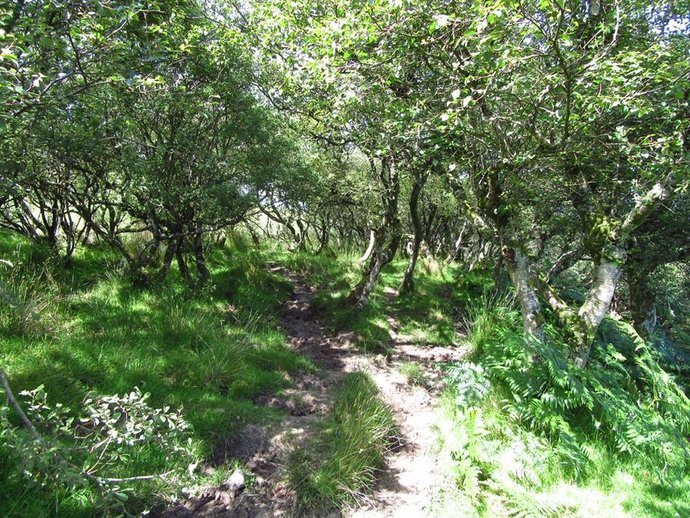 After this it's easy going again, past a reservoir with good views down to a hidden beach: 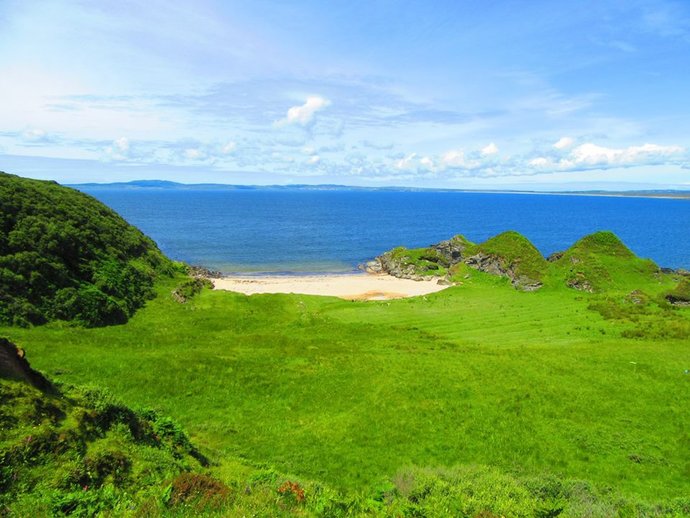 Re: Moorland march to Soldier's Rock

From the reservoir it wasn't far to the stream crossed right back near the start of the walk. After fording this we were back on the outward track for the final few hundred metres. Back at the car we had plenty of time to pay a visit to Kintra Bay before yet another distillery tour booked for later in the afternoon. It's a tough life... 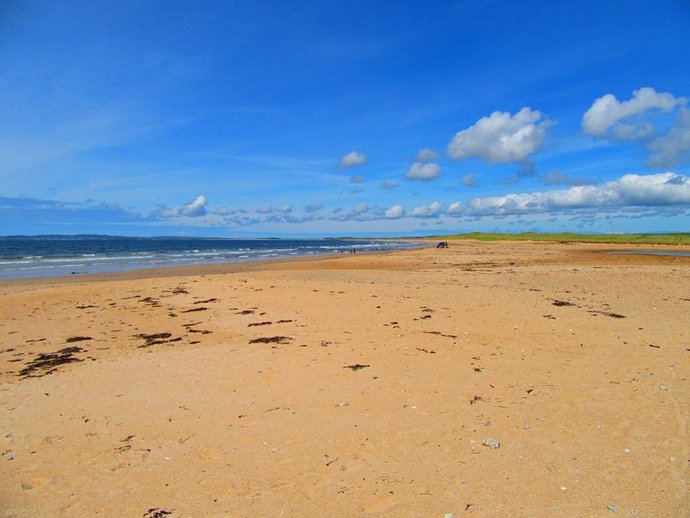 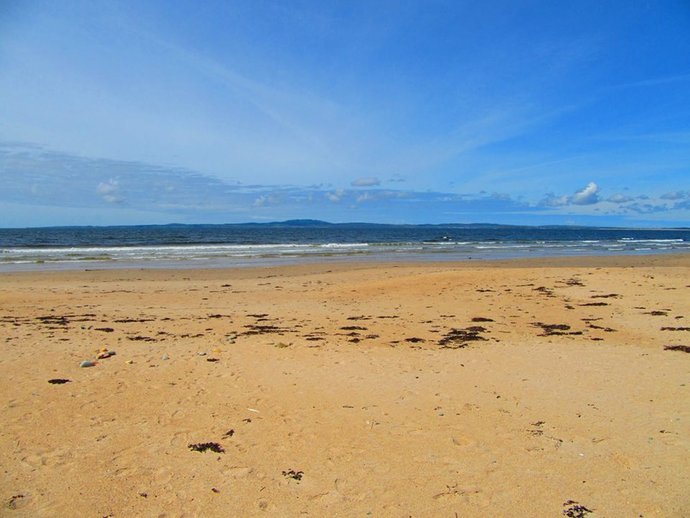 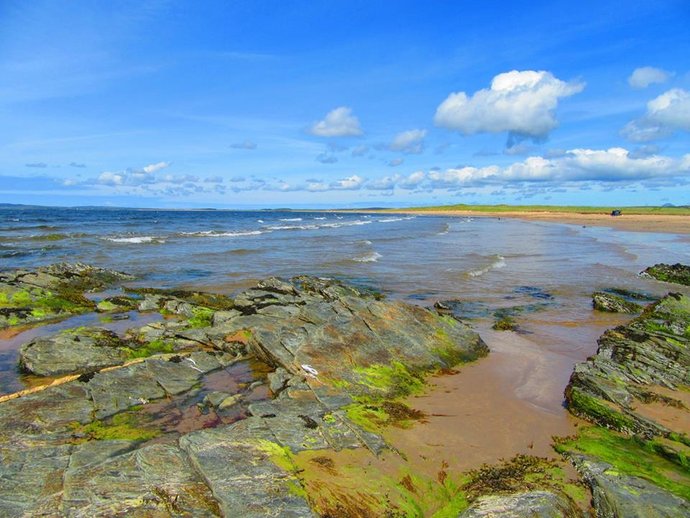 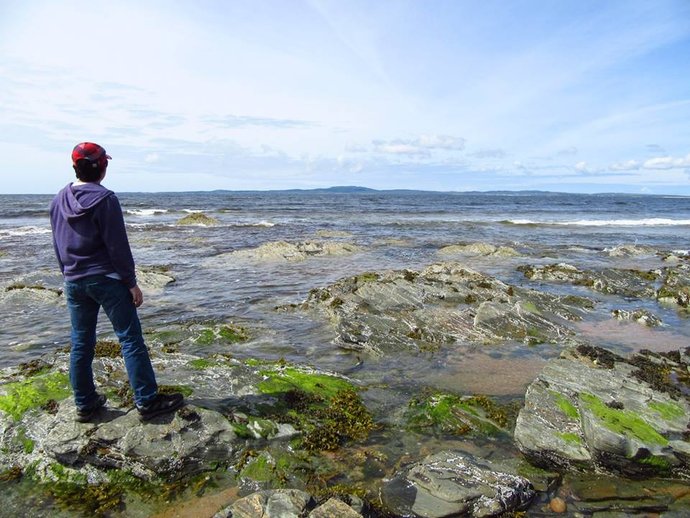