One good thing about the weekend in May when I hurt my knee was that it finally pushed me so far behind in my plan that I needed an extra weekend - until then I was just trying to squeeze things in wherever they would fit. So now I was getting to play on a tiny steam train, and visit Hardknott fort, and follow the river Esk all the way up, and just get another chance to go to Eskdale, which was a lovely place.

I spent the night in Carlisle, to save myself a very early start, and set off on the morning train round the coast, and at Ravenglass the little steam train was waiting impatiently. 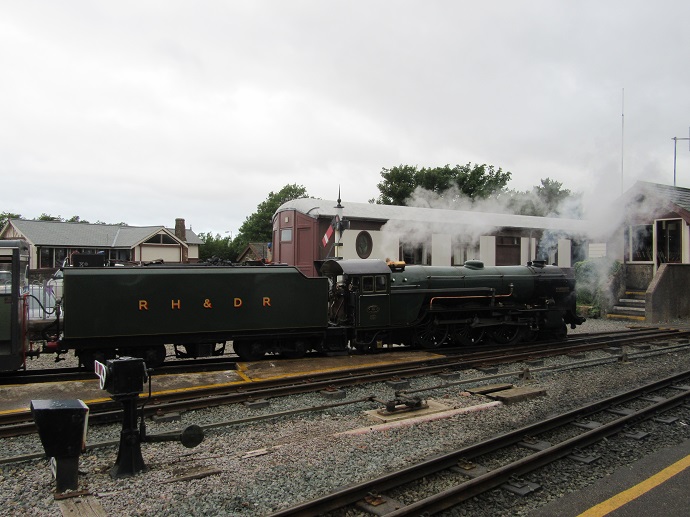 I'd promised my sister I'd take a picture of the turntable at the other end, although I wasn't sure why she wanted to see it so much, and was amused to discover that we'd had an secret passenger all along. 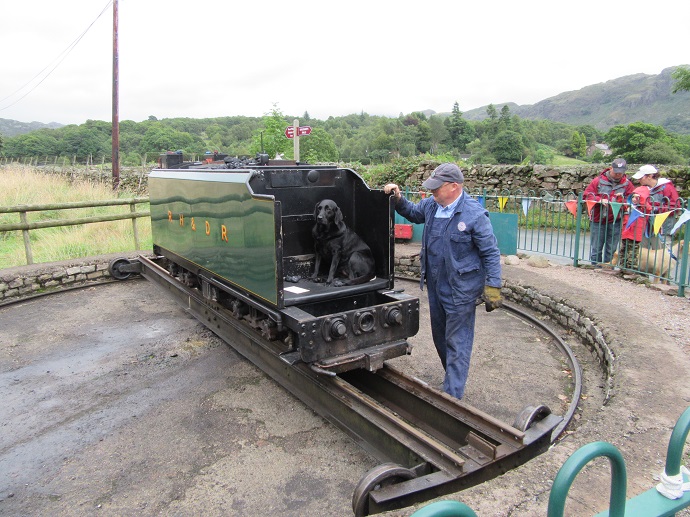 I went into the cafe in search of cake, and wandered along towards the hostel eating it (it was cherry shortbread, and very good). In the village I was disappointed to discover that the shop was only a souvenir place, not a real village shop which could supply me with lunch - it was almost 12, and I thought about being the first person for lunch in the pub, but decided I was better off walking along to the Woolpack first. So I did, and had lunch there, and left some of my stuff at the hostel, and set off for Green Crag, down the road to Doctor Bridge. 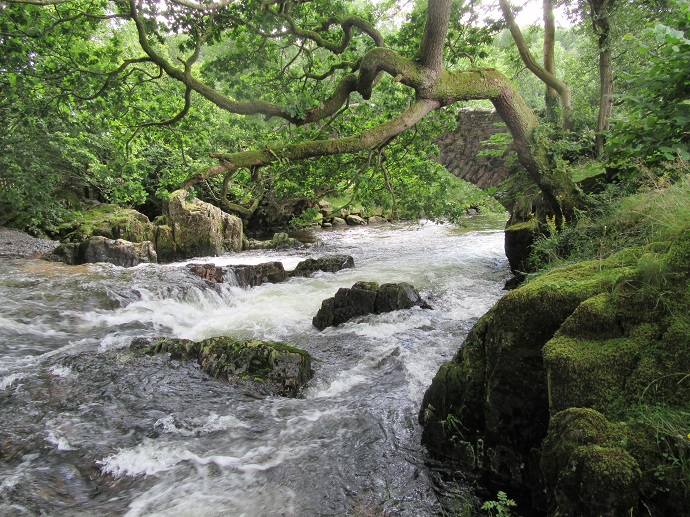 From the road, the first part looks like quite a solid wall of hill, but a good path turns out to slant up it and then turn back to follow the edge - one of the old peat roads for bringing fuel down from the hills. It was August, so of course there was heather. 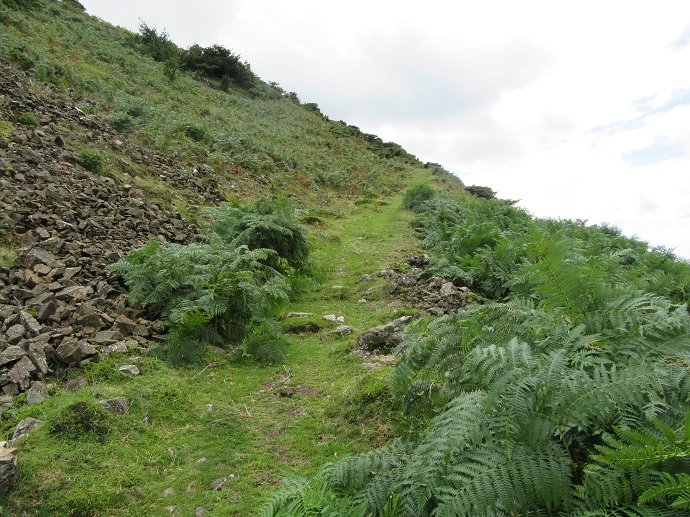 I went on past an old hut, and came round the corner, where there was suddenly far more hill than I'd realised - I knew it really, but it was hard to get a good idea of it from the map, because it was over the fold in the page! 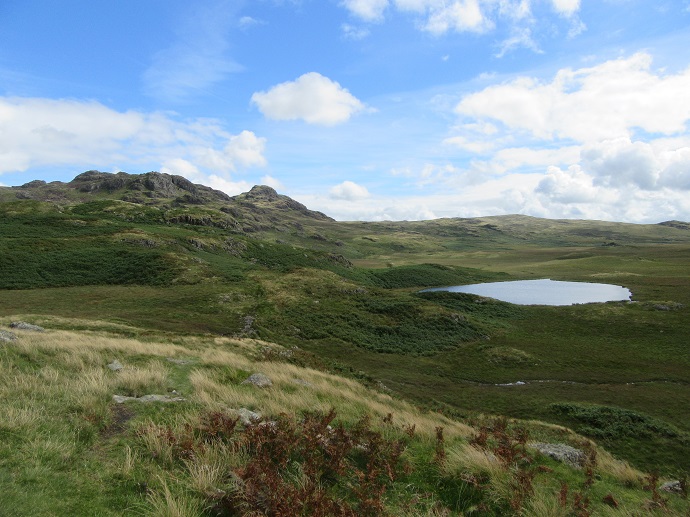 The path wound on past a little tarn and past a lot of rocky places. It was confusing here - the path was clearly going past all the highest places, and although I didn't think I had come far enough, there was nothing in sight ahead except Harter Fell - and the right of way on the map did skirt the summit. Of course, as soon as I left the path and began to climb the summit came out of hiding ahead again, and I could see that the path led to it! The summit was a little clambery place with good views to the sea, and over the southern foothills. I was fascinated by odd patches of green fields in what was essentially a moorland view. 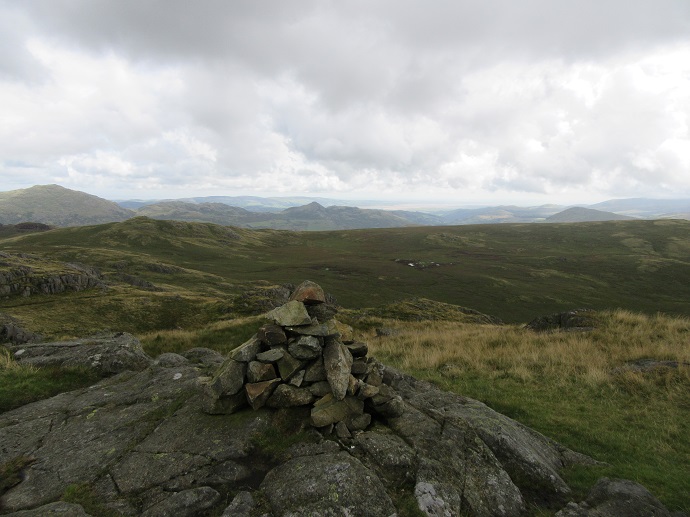 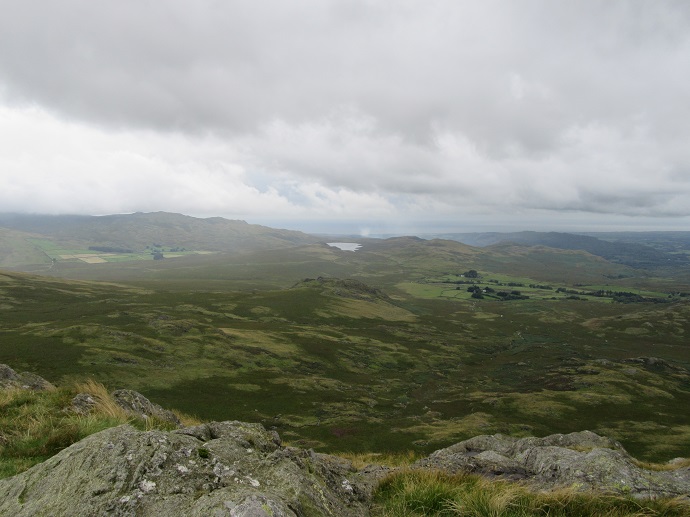 There was no sign on the map of any path to Harter Fell, but I was sure that there would be one, and there was - just a tiny thread leading over a little heathery ridge and then through a very boggy place, where I lost the path but found a way through in the end. At the other side there was a stile over the fence at the foot of a forestry plantation, and a path leading up the side of it - and it started to rain. Looking back, it was clear just how wet the valley between had been! The rain didn't last all that long, but it was followed by a succession of low clouds, which was a shame, because it had been a lovely day for a while. Under the clouds and over Stickle Pike the sun was shining on the sands at the mouth of the Duddon, but there wasn't much of a view otherwise. This was more of a climb, and with nothing to look at it was a long slow pull - although I did meet my first (and more or less only) other walkers of the day.

By the time I reached the summit there was no view at all, just grey cloud. This time there was a choice of little climbs - the trig point wasn't quite the highest summit, but it was the most photogenic. 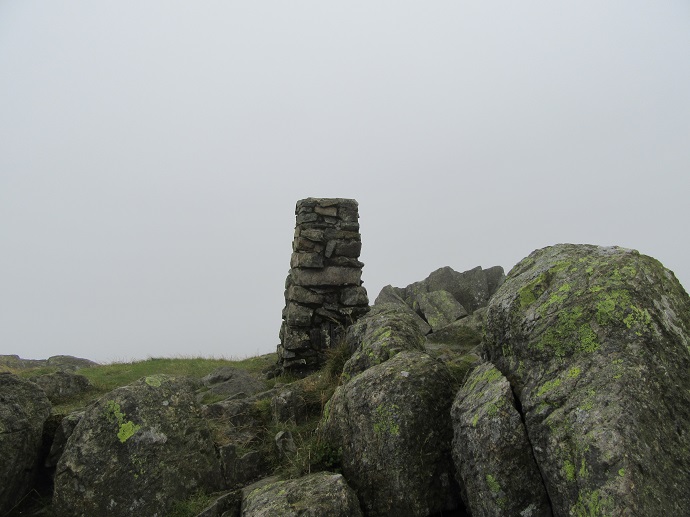 The descent was really just an educated guess - I knew I had to take the left hand fork in the path if I wanted to come down to Hardknott rather than into the Duddon Valley, but there were more forks than I expected, and I just kept heading left. I was surprised as well as pleased when the cloud finally cleared and I was exactly where I wanted to be, with the top end of the Duddon Valley running along towards Cockley Beck ahead of me. Glimpse of the Duddon valley

Somewhere after that, though, it went a bit wrong - I was still following a little trace of path, and it brought me to a gate through a fence to a forestry path - which fitted with the map - only that path was taking me very definitely downhill into the Duddon valley, and not along towards the top of the pass as the map showed. So after giving it a chance I turned off - but now I was on one of the worst kinds of ground, where trees had been cut and branches left until new things grew over them, so that you never know how much the ground is going to shift or crack under your feet!

Eventually I fought my way back up to the fence that I should have followed in the first place, and found myself more or less at the top of the pass.

It wasn't even as late as I thought it might be - about quarter to 7 - and although it was quite late to be starting on a new hill, Hard Knott wasn't far (and it had been a lunchtime start).

I was starting to struggle, though - the knee I hurt in May had been fine until I went back to the lakes in June, and then had been fine through a summer of wandering and sightseeing and two dance festivals before suddenly starting to play up again on the downhill from Harter Fell.

But it was too close to give up, so I headed up to the top of the pass, where I met two people who were looking for the fort but not willing to drive back down the zigzags to find it (which is fair enough, but it really should be better signposted in that direction, because I've walked straight past it too), and dodged round the crags to find the path which heads up on the other side of them. I definitely didn't find Wainwright's route, because no scree was involved (which I was glad about) - I think I headed left when there was a choice of route. It reminded me a bit of High Rigg with the ups and downs and low boggy places.

But I was just finding it dull, and I had an odd fit of doubting - I think for the first time - whether I actually wanted to finish all this - by the end of the next day I should have finished the Southern fells, and wasn't that enough? (I've doubted this summer whether I would finish it in the sense of caring enough to pass border checks to get there, but this was a different thing.)

And then a few minutes later I found that I'd been walking beside the summit ridge, and turned up a short climb, and there were views of the higher hills around and towards the sea and everything was fun again. But it was oddly compelling while it lasted. 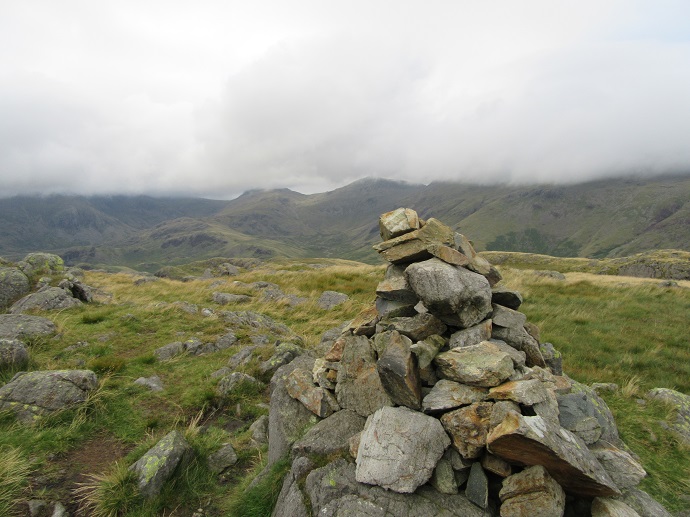 Having made my way back down to the road all I had left to do was limp down the pass - it's definitely easier in this direction, and there weren't so many fools about in the evening, but my knee was complaining a lot. The little gorge of Hardknott Gill provided some distraction, and stopping to potter about the fort helped even more - it's fascinating the way they built to the shape of the land, and also the setting - along the Wall there is at least a chain of forts, but this one looked very lonely. 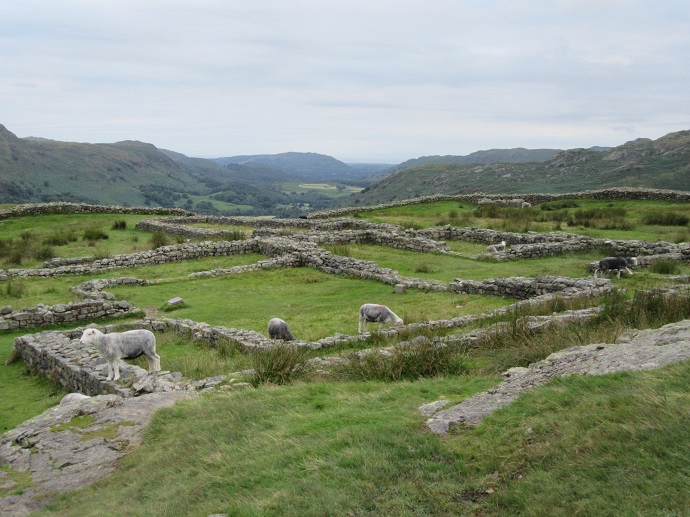 I'd hoped to make it back to the Woolpack before they stopped serving ordinary food at 9, but it had obviously been a choice between that and the fort, because I think I got back to the hostel about 2 minutes past. The pizza was not as peculiar this time, though - and the beer was good!

Lovely interesting read Nige, bit of a bugger about the knee playing up again

Isn't it funny (or rather not funny) how short cuts always seem to result in poor underfoot conditions and a reluctant return to the path we should have taken, happens to me all the time....and worse still I don't seem to learn.

Beautiful photos early on and though the rain killed the views in the middle of the hike it was great to see the views return later on.

Thanks. It was a real mix of a day weatherwise - I hadn't realised quite how much until I looked at the photos again!

I got caught up in shortcuts that weren't a few times that weekend - that one was more that I started off following a clear path that turned out not to be the one clear path shown on the map. Never trust forestry people...

It was a bit more than that - it's 5 minutes from the hostel to the pub. I knew they did pizzas until 10, so it was ok - the frustrating thing was that I just couldn't hurry - my knee had a speed, and that was that!

(The *really* frustrating thing was that a week later I went into the Pentlands and deliberately came down the steep bit at Hillend to make my knee hurt so I could take it to the doctor and point at the right bit - and it was absolutely fine. Only hurts in the Lake District, apparently!)

nigheandonn wrote:(The *really* frustrating thing was that a week later I went into the Pentlands and deliberately came down the steep bit at Hillend to make my knee hurt so I could take it to the doctor and point at the right bit - and it was absolutely fine. Only hurts in the Lake District, apparently!)

Well thats just bloody annoying mate, it's so frustrating to try and identify a problem that keeps hiding away. It's like when the car has a constant niggle and you go to the garage only for it to stop making 'that funny noise' as you pull onto the forecourt