Another chance to visit lovely, Glen Spean, after a fairly recent trip to Creag Meagaidh, which was rather spoiled a little, by low cloud and a stiff wind. Despite some initial doubts, today was not to go the same way, thankfully.
Being a bit of a long trek in, we decided to take the easy option and loaded up a couple of bike's, along with the usual gear. As has often been the case, the run up through Glencoe, provides new spectacle and views to marvel at, plus the early start makes for speedy progress, unlike the return trip!
Once the bikes were unloaded, we pretty much followed the WH route listed here. One useful point might be to note, at the first turn, off to the left, there is a gate to go through. Might save you dithering about, wondering if it is the right way, or carrying on further, then having to turn back

Anyway, from here the track begins to slowly climb, as it winds towards the group of pine trees. As it slowly climbs, I quickly got slower, but Big Jasper, quickly got quicker, as his recent bike practice began to show, leaving me adrift in his wake 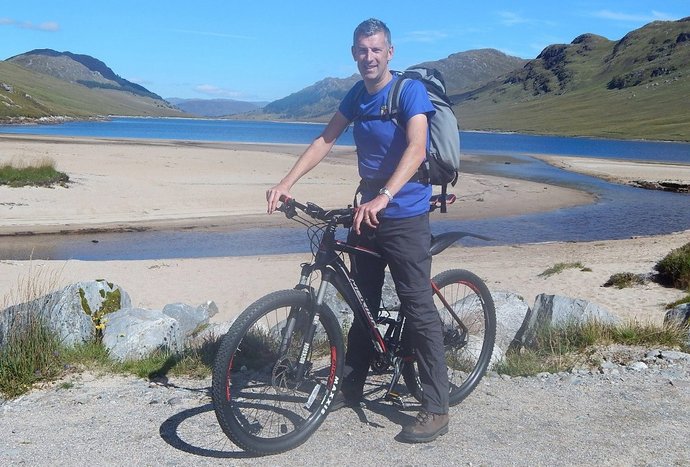 Big Jesper, with his big bike with the big hidden engine :)

Can't remember how long it took till we were at the southern end of Lochan na h-Earba, but we decided to keep going a bit further, up the now quite rough track, past the sheilings, though by that stage had to resort to pushing. We dumped the bike's about the 400m contour, but in retrospect, we could have pushed the bikes, up to the spot where we headed off the track to Beinn a'Cachair, as it was probably no more rough, than lower down. 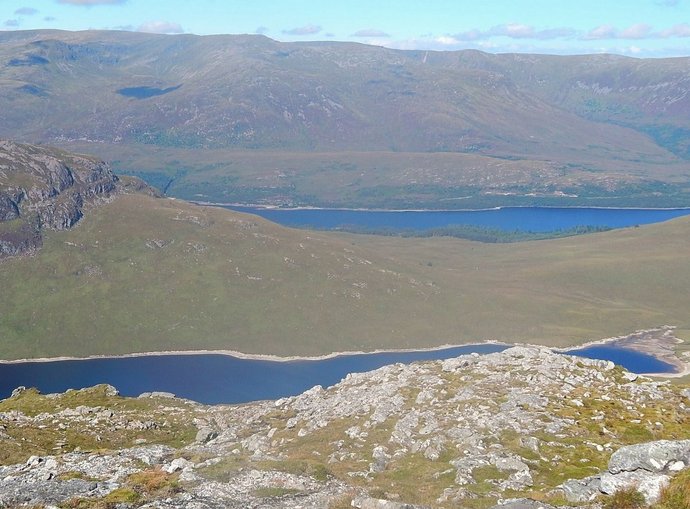 Looking down on Lochan na h-Earba and Laggan, from Creag Pitridh. 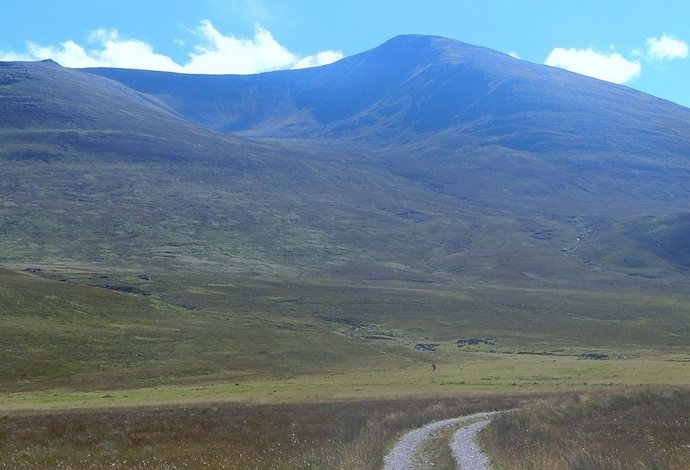 Couple of punters approaching the sheilngs, on way toward Beinn a'Chlachair.

Having burned me out on the road, Big Jasper, soon set off to do the same on the open hill, as we headed south, to the steep slope, which would take us onto the ridge

A bank of fog appeared to be heading our way, but soon passed, to leave us to enjoy sun for the rest of our trip, as we came to the eastern rim of Coire Mor Chlachair. From here progress was more enjoyable for a short time, till we were in among the stony stuff, all the way round to the summit cairn. 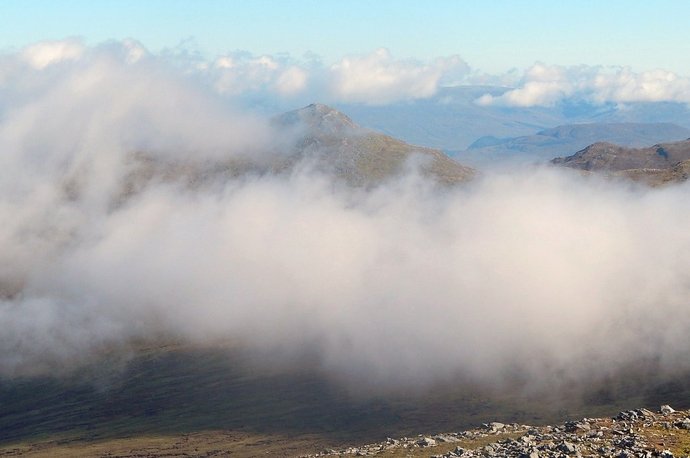 Creag Pitridh emerges from a passing bank of fog. 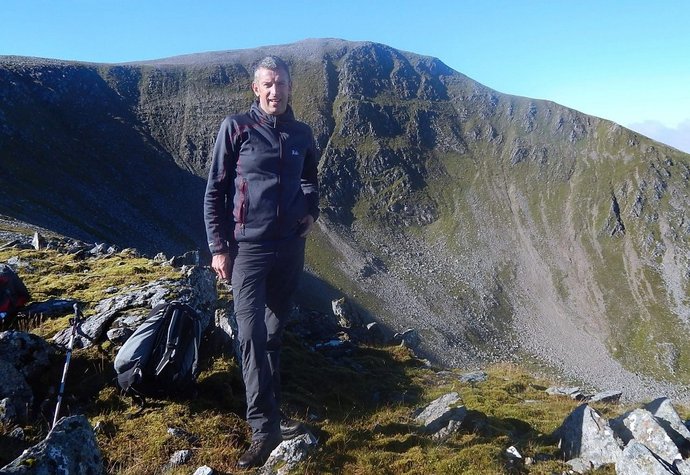 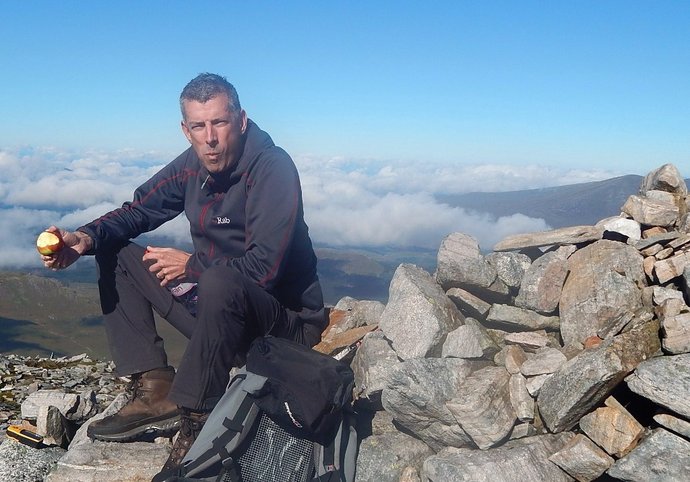 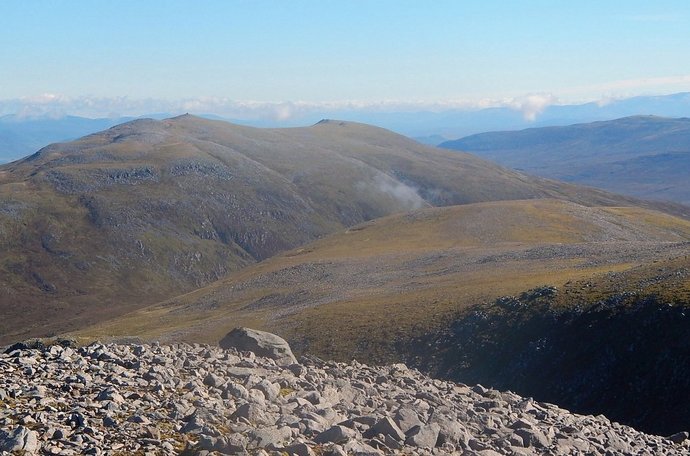 Geal Charn, from the 1st top. 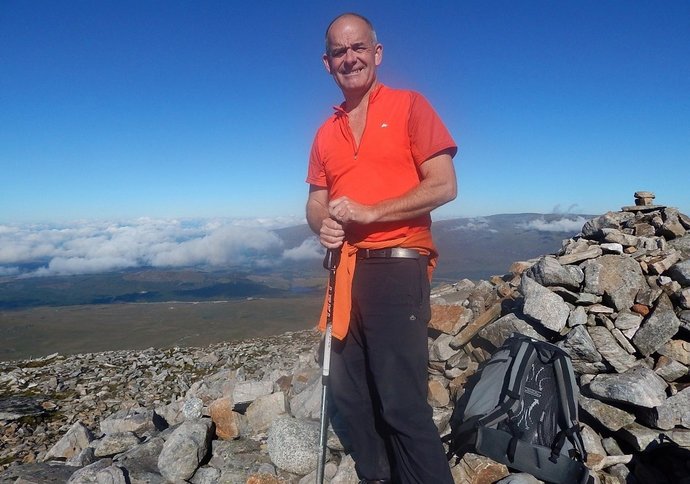 I think we were about 2 and a quarter hours to here, but after a few pics and some grub, we set off for number 2, Geal Charn. It's a bit of a plod, over the stones, boulders, down steep, boggy grass and back over to the stalker's path, but didn't seem to take too long on the ascent before we were at the top of Geal Charn, or Mullach Coire an Lubhair. Nice views back to Beinn a'Chlachair and other neighbouring hills, though we weren't able to pick out any of the Cairngorm one's. 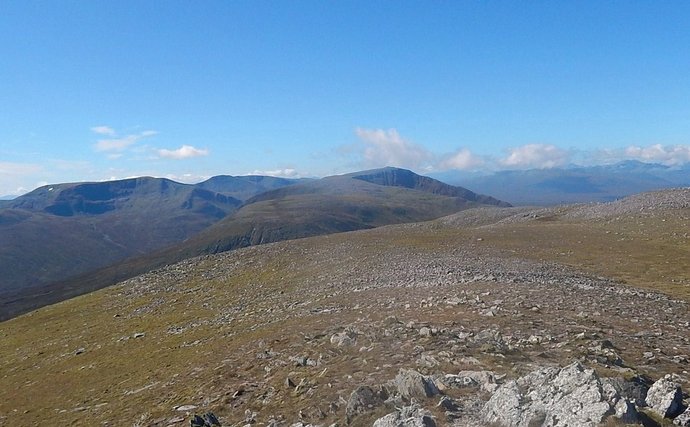 Looking back to Beinn a'Chlachair, just right of centre, from Geal Charn/Mullach Coire an Lubhair. 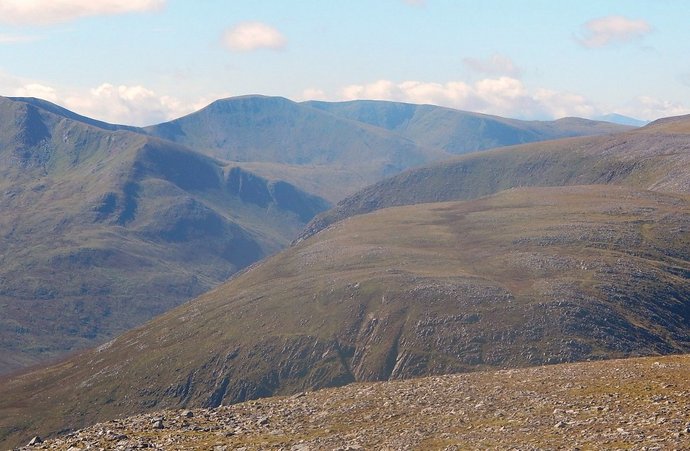 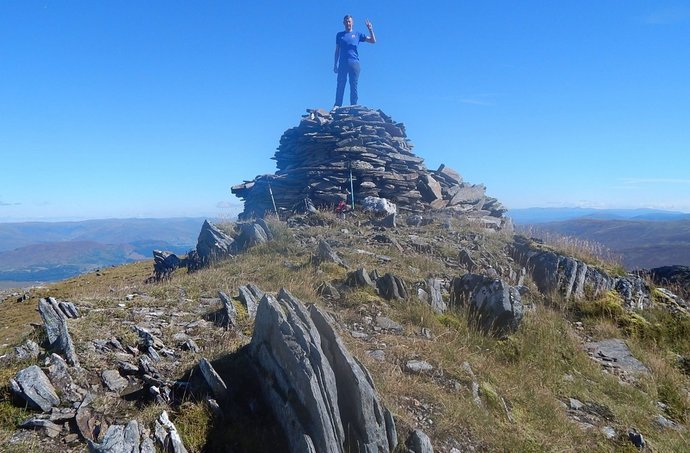 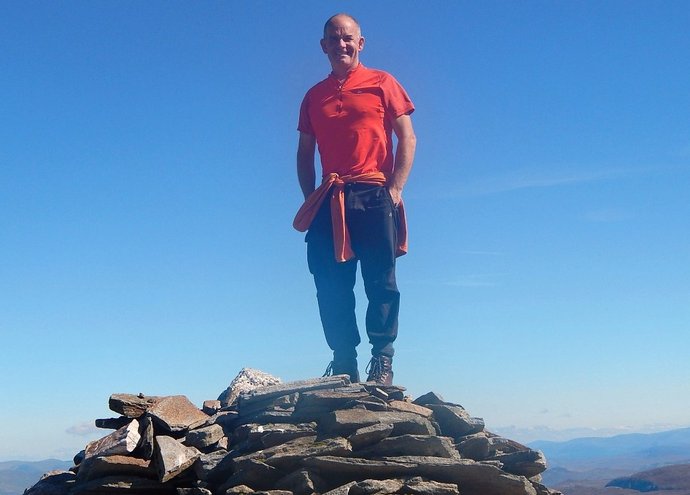 Geal Charn, summit cairn and me. 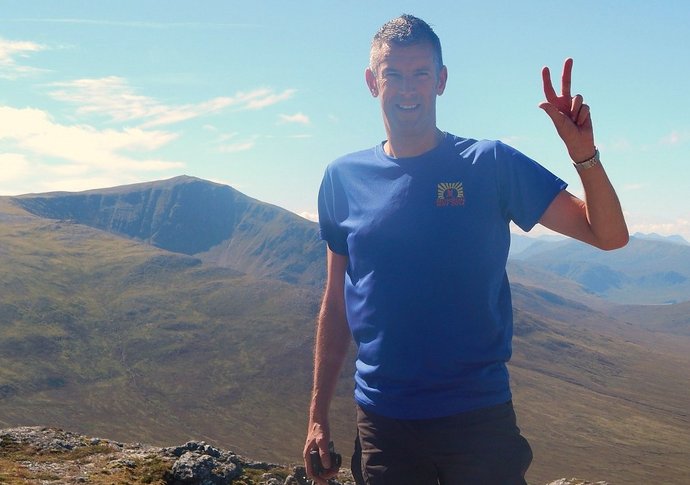 Looking back to Beinn a'Chlachair. Previous arithmetic lessons pay off :)


From here it was a quick half hour, or so, over to Creag Pitridh, which also enjoys fine views over Lochan na h-Earba and Loch Laggan. We briefly contemplated a more westerly descent, but opted to return to the stalkers path between the last two, where we met a Russian, who hoped to be the first of his kin, to compleat all the Munro's! After a quick chat, we carried on down the main track to the bikes, which seemed much lower than we originally thought. It sure was bumpy, but great fun and a time and energy saver, as we free-wheeled back down to the lochan, which by now was bathed in sunshine, looking almost Mediterranean 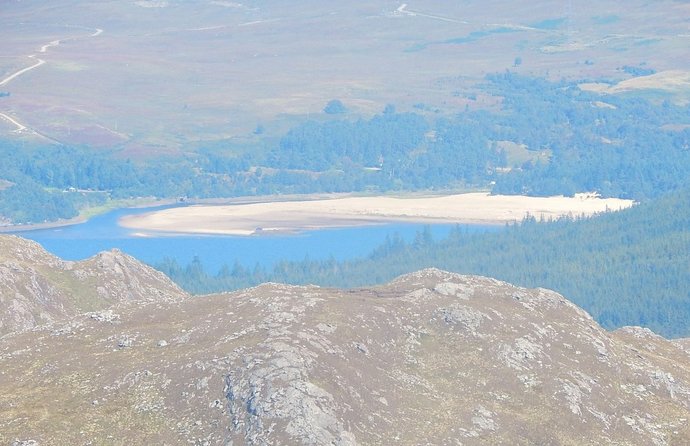 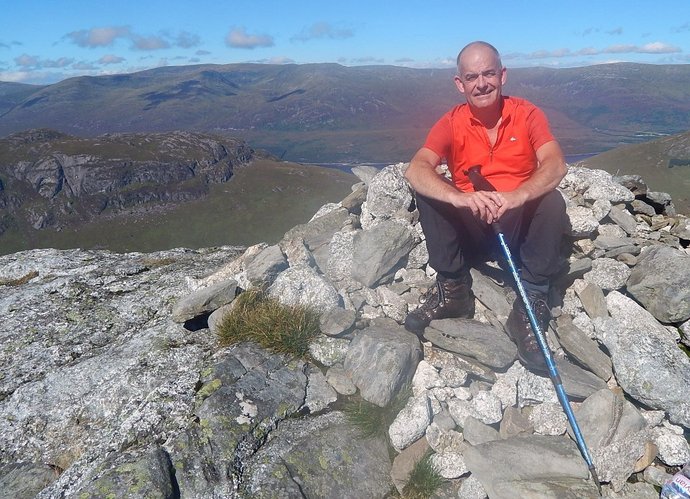 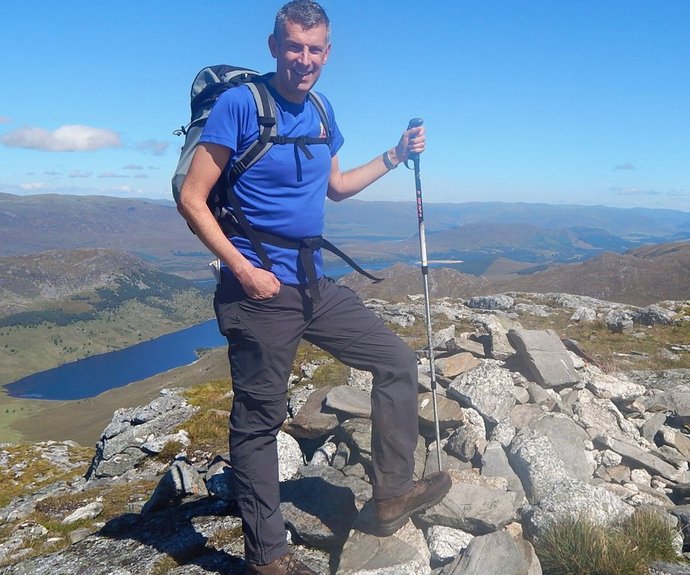 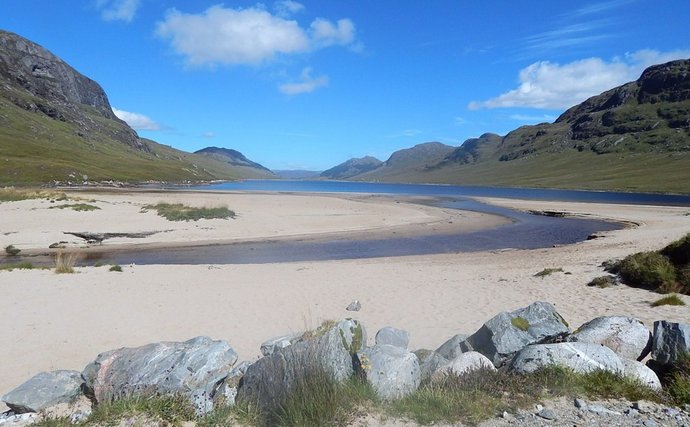 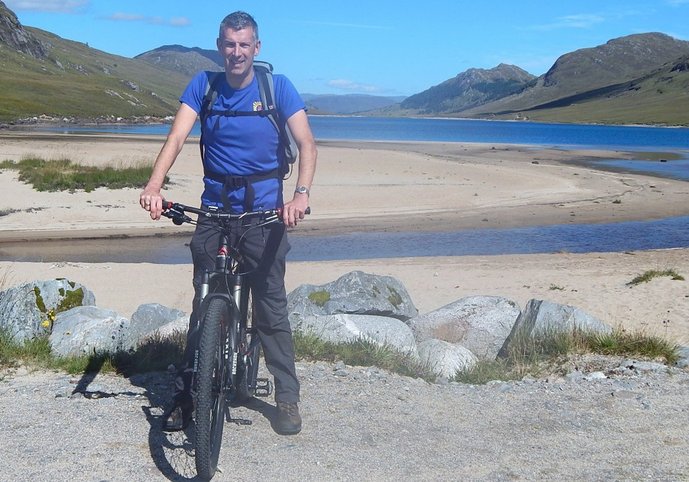 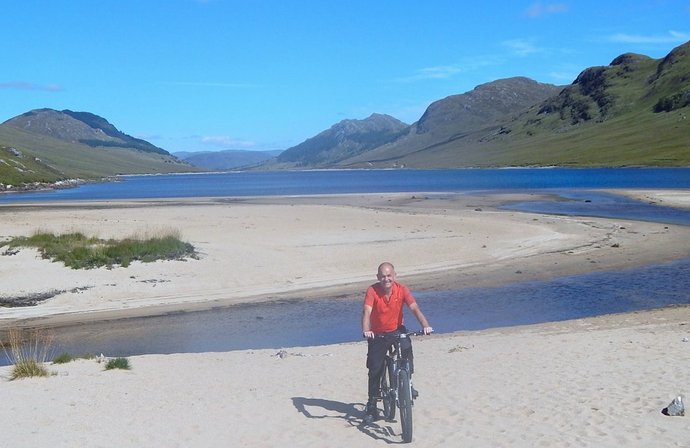 Despite the temptation, we resisted going for a dip ..... cause I'm a fearty and cannae swim

Back on the landrover track, going downhill, progress was fun and quite speedy, making me realise that it is perhaps a bit steeper heading outwards, than I had first thought. Anyway, before long we were back at the car on the A86, after another superb day on the hills. Took us six and a quarter hours, which we thought wasn't too bad, but it appears other have walked it even quicker 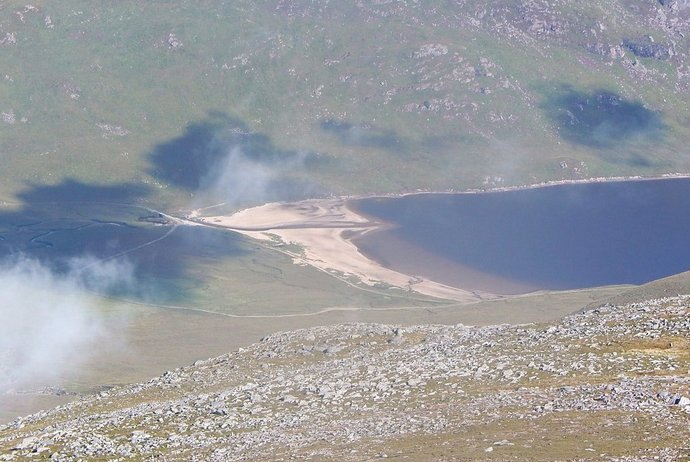 Looking down on the west end of Lochan na h-Earba. 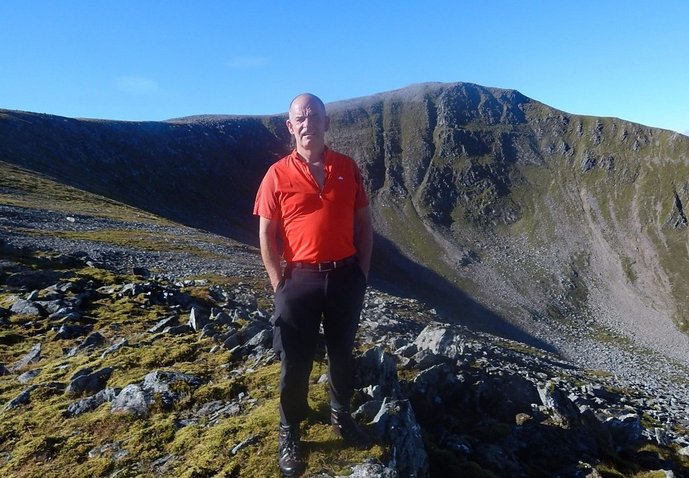 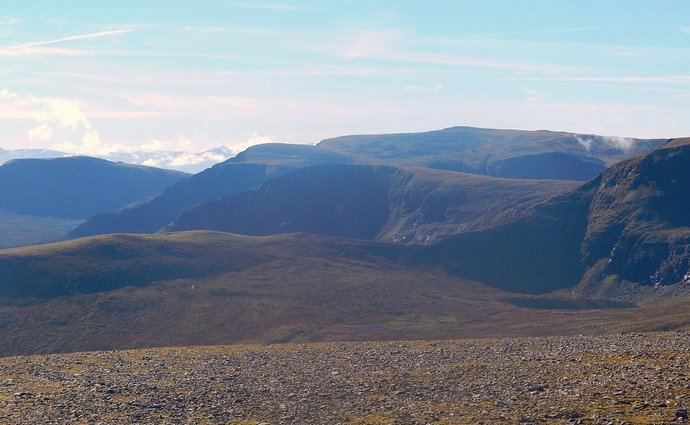 Ben Alder to the south. King of the Castle!

A fantastic day on the hills Jimmy. Much nicer hills than what i expected. BJ

- but well done both of you

(Needless to say we did none of those things

- but well done both of you

(Needless to say we did none of those things

Ha ha. The shock would really be if we never cheated. We might be daft, but we're no' stupid

Aye, good weather always helps and it would be a long day out there, if conditions were poor, as some seem to have had. Thanks for compliment re photo's. Same weather factors involved. We're maybe a bit lucky, being able to be more flexible when we go, though that is becoming more of a challenge, having done almost all the hills near to home. Hope weather is kinder to you and by all means, you have my permission to cheat, when next out

A beautiful spot that lochan - even without doing the hills. On the 'cheating' issue I'm not sure how much easier it makes it cycling on rough tracks although can see the benefit for the downhill homeward run. Any means that get us out to enjoy this amazing landscape sound good to me!

dogplodder wrote:A beautiful spot that lochan - even without doing the hills. On the 'cheating' issue I'm not sure how much easier it makes it cycling on rough tracks although can see the benefit for the downhill homeward run. Any means that get us out to enjoy this amazing landscape sound good to me!

As you say, each to their own and I'm sure H&P, doesnae care how we, or anyone else does 'it.' The only cheats are the one's that say they walked it all, when they used a bike, or took the ski lift, etc. It's a bit like golf, really. No point cheating yourself. Anyway, as you say, a beautiful spot by the lochan and long may you keep freewheelin.'

Soo sounds good to me going to have a go in a couple of week’s. Hears hoping for some decent weather

john@blaven.net wrote:Soo sounds good to me going to have a go in a couple of week’s. Hears hoping for some decent weather

Good luck, John. Weather so unpredictable just now, but if you get lucky you will enjoy this trip, tho I wouldn't count on getting the speedo's on 😁

Another one to get southerners green with envy. What a fabulous day!

It is really interesting to see these hills from this approach route, having walked them myself approaching from the Ben Alder side. I guess all great hills bear multiple repetitions from every possible angle.