Up North Buttress & down Curved Ridge

Up North Buttress & down Curved Ridge

nbuttress curved actual.gpx Open full screen  NB: Walkhighlands is not responsible for the accuracy of gpx files in users posts

As you can tell from the gpx route above, there were a few changes of plan yesterday. Or I was drunk. Originally, the plan was to park at Altnafeadh, do North Buttress, descend Great Gully Buttress, up Curved Ridge, return to car park via the coire path. Altnafeadh & GG Buttress got scrapped but I managed a descent of C Ridge for the first time, this turns out to be easier than you would expect. Up N Buttress & down C Ridge is a great route and a lot less time and ascent than my wandering.

Altnafeadh car park was packed so I went to Jacksonville, 3 guys headed for the Buachaille just after I parked and another group of 2 set off soon after - they sensibly brought wellies for the boggy trek to the hill: 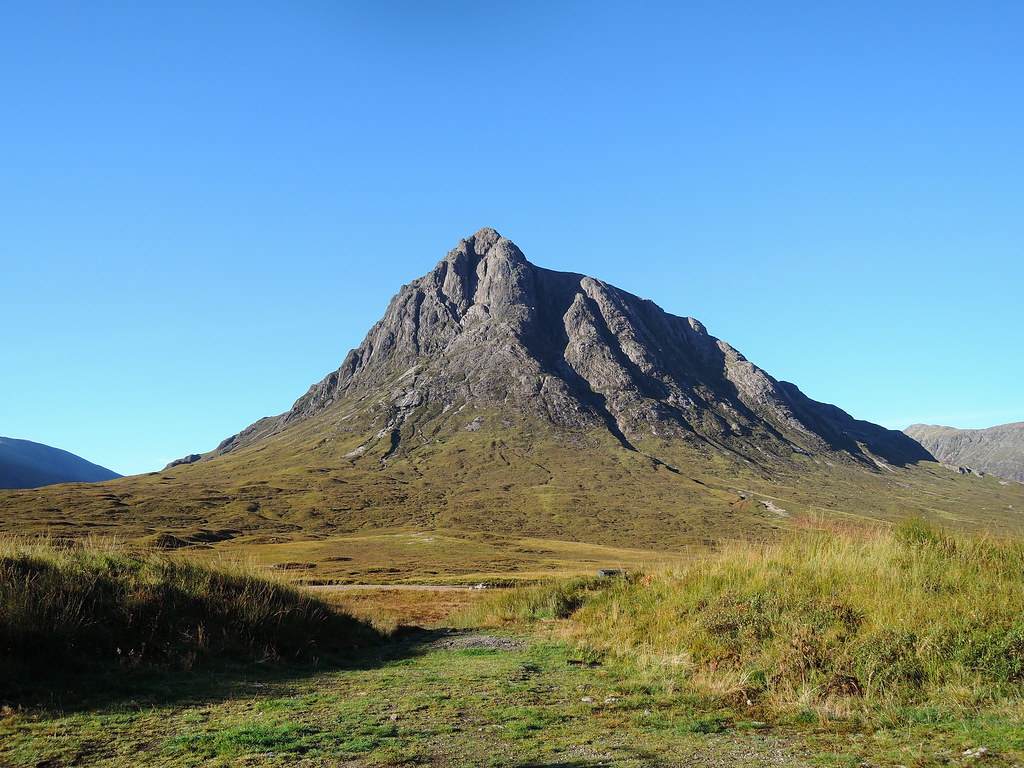 I caught up with the guys, they were also aiming for N Buttress but hadn't done it before so I pointed out the start. I went round the path to Great Gully and took the path up & they took a more direct route up. 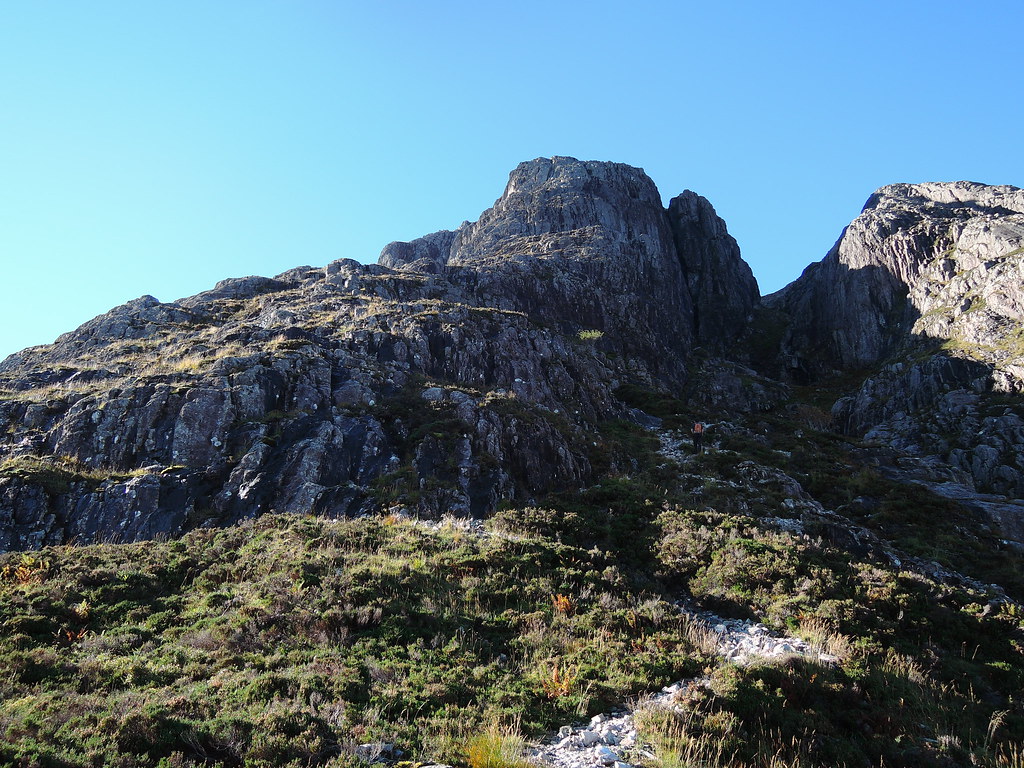 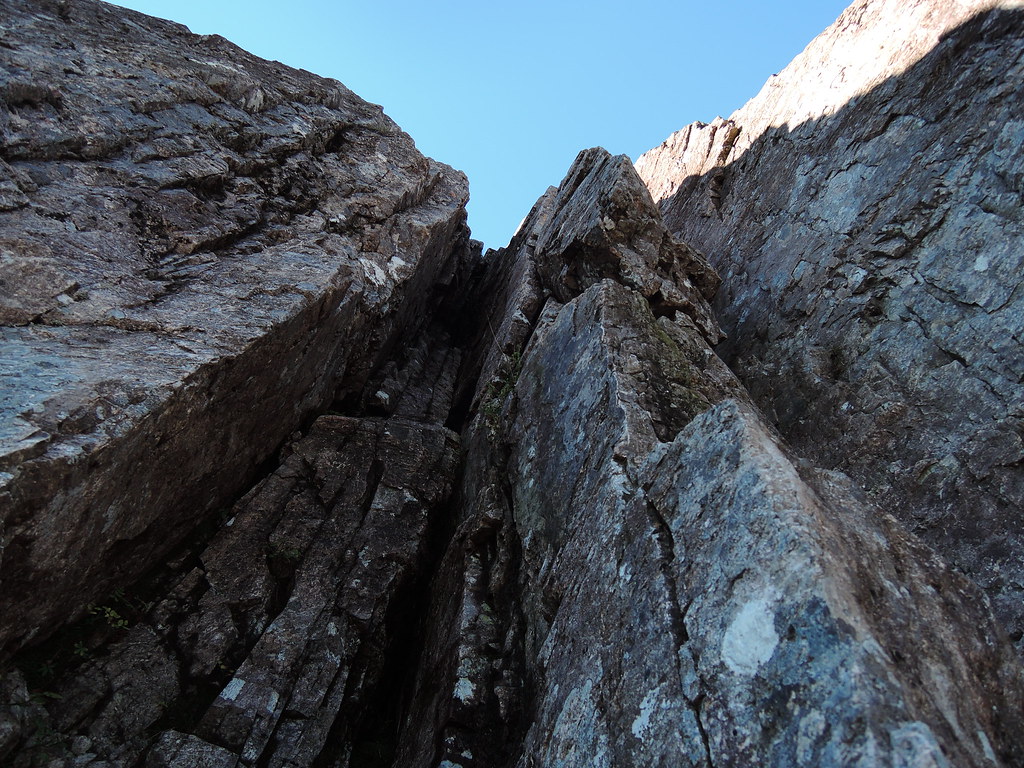 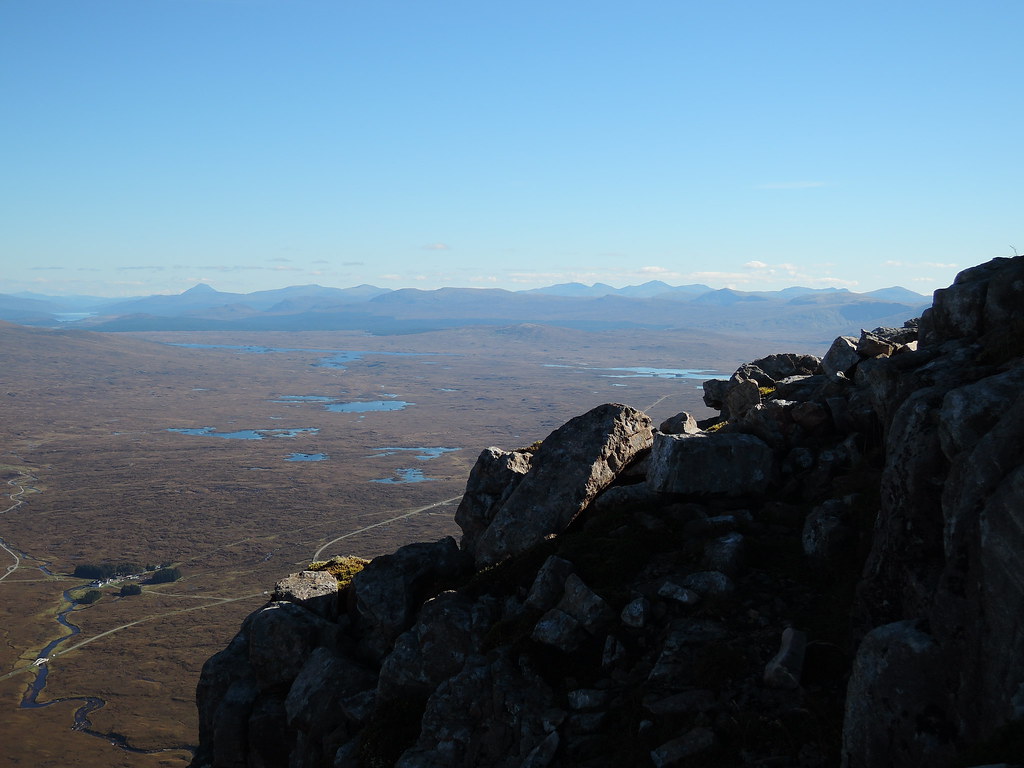 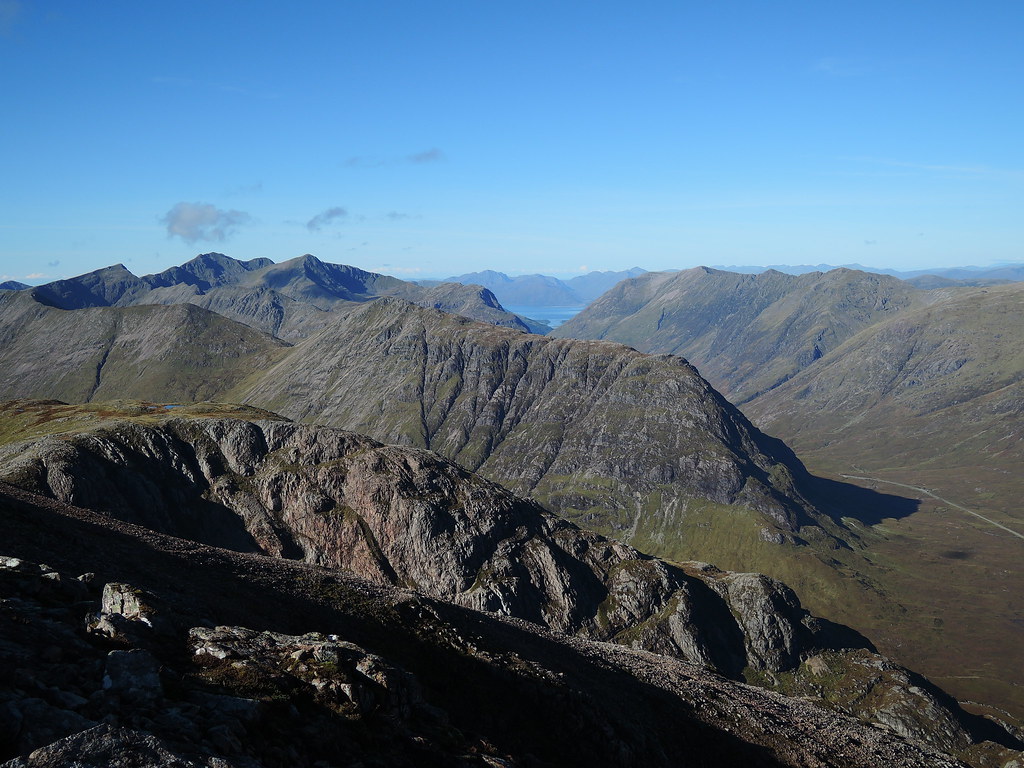 Then I went round to have a look at Great Gully Buttress. Couple of guys had just come up Broad Buttress & said there were wet, greasy bits so I thought the coire path would be safer.

Curved Ridge - up and down

This was a fair sized detour though, and some reascent to get to the start of C Ridge. From the path, you go up the scree slopes on the left hand side of the water slab then make for a group of trees perched on a rock. The path goes to the right in front of the trees, then there are a few easy scrambles up to the start of the ridge. Important to keep an eye out for these trees on the descent. 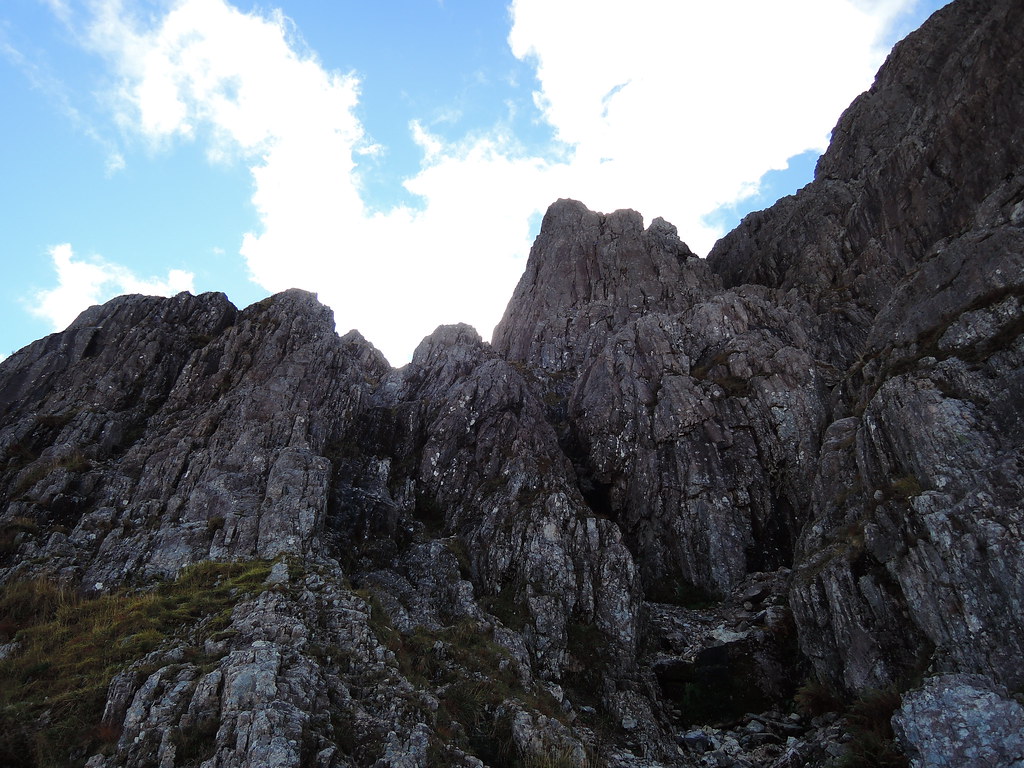 I got near the end of the ridge then met the 3 guys who had also come up N Buttress - they were descending C Ridge, which is something I'd always wanted to try but thought it would be tricky. I got to the cairn at the top of the ridge then decided to turn around and follow them.

Descending the ridge was straightforward. On the way up you tend to look for the most interesting scrambles, but a lot of these can be avoided on the descent. Plus, you'll be descending this after climbing up something so you'll be warmed up.

When you get to a steep section you can back up and have a look around - sometimes there's a route at the side where you can walk down. None of it is overhanging or vertical so even when there's an unavoidable scramble you can look down and see the easiest line, plus the juggy handholds are visible from above which is reassuring. It's easy to dislodge stones going down so beware below. The end of the ridge is where it joins the stream coming down the gully, the clump of trees on the rock will be on the right soon after this. 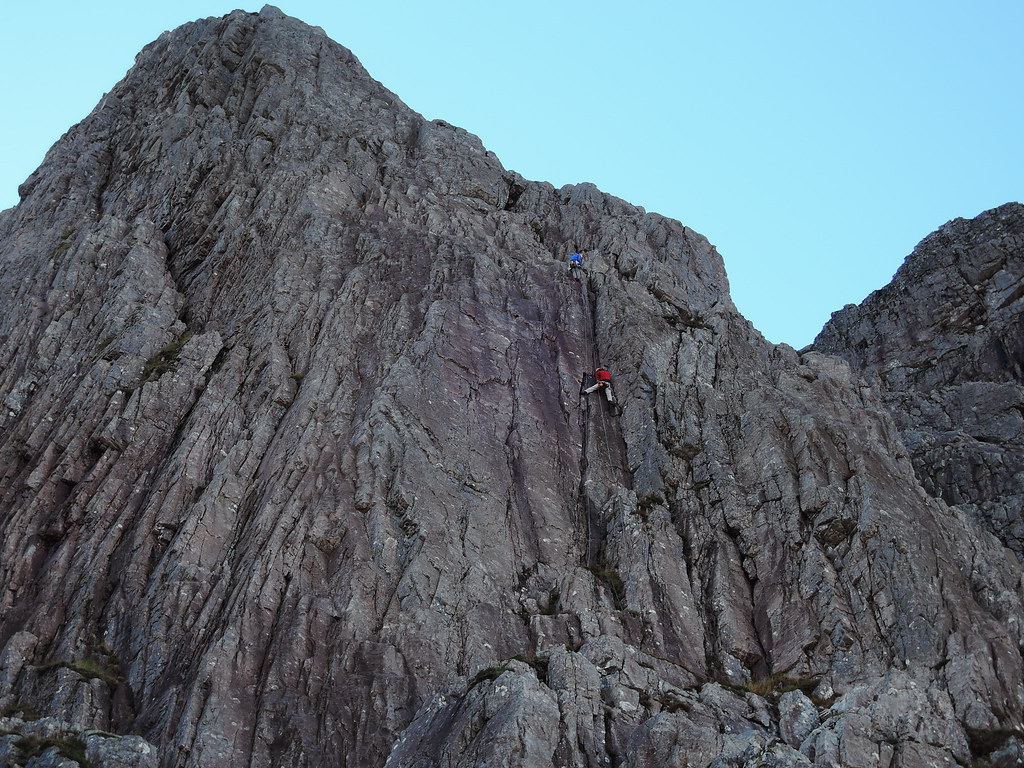 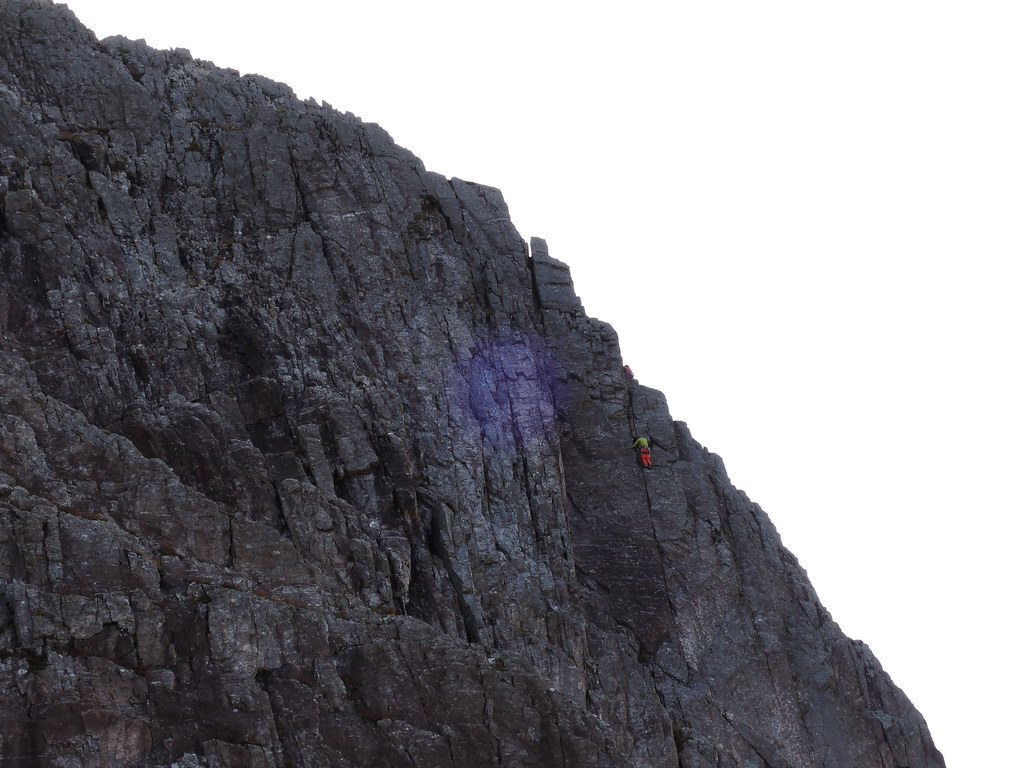 Re: Up North Buttress & down Curved Ridge

Glad to hear the descent of curved ridge isn't so bad - My Dad often tells me I should be descending the Buachaille that way, but then I never do! Looked a braw day out anyway - the weather was sublime this weekend.

We went for a couple of routes in Assynt, but mostly ended up floundering about in bog

Re: Up North Buttress & down Curved Ridge

Nae luck with the bog, it's character building though. You wouldn't have any problems on CR, good practise for the Cuillin.