I'd fancied doing the three Broughton Sub 2ks as one big long day. But Trahenna on its own made a really nice afternoon walk, after our original plans for a family trip up Broad Law were hastily revised when we drove to the Megget Dam and found the cloud right down and some unexpected drizzle.

We parked in the car park behind the village hall, and set off up the A701 (no pavement

) for a couple of hundred metres before turning right onto the road that led up past Broughton Place. This road soon became a rougher track to a walkers' car park—but since we were doing a loop, parking up here didn't seem to make much sense. The track up to the car park at Broughton Place

Through the gate after the car park, and we immediately slanted SE up a faint ATV track towards a farm gate. Through the gate, we followed a path up onto Trahenna's west ridge, and up another steep pull to a fence junction. Trahenna's summit is on a spur off the main ridge, so we hopped over the fence and followed a faint path up to the top, and a fairly unimpressive cairn. The views were much better, E to Penvalla and the Tweed valley stretching into the distance, S to Broad Law, still under cloud, and W towards Culter Fell and Tinto. 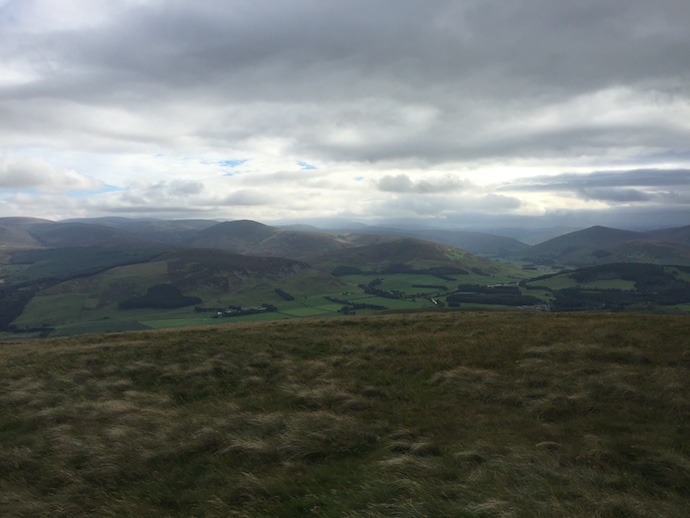 From the summit south towards Broad Law in the murk

An angry squall had suddenly appeared to the NW, so we didn't stay too long, and headed W following a faint path traversing the head of Mere Cleuch immediately below Trahenna. The path round the head of Mere Cleuch

This path eventually took us to Ratchill hill, the prow high above Ratchill Farm, and also the turning point of the annual Greenmantle Dash, a New Year hangover-bursting race sponsored by a brewery… 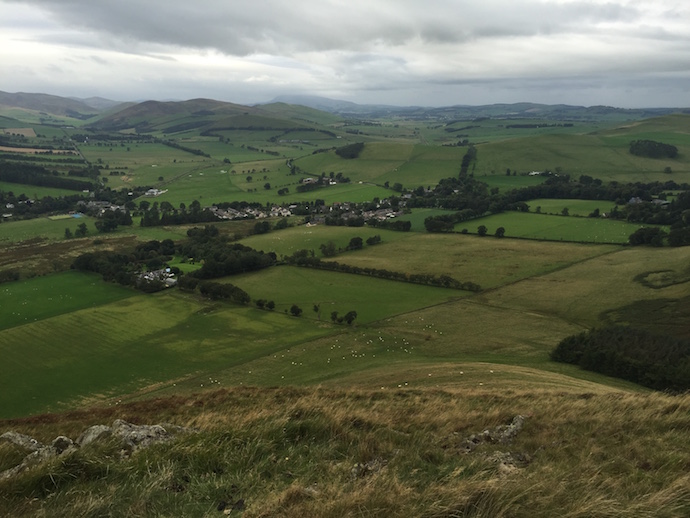 Above Ratchill Farm, looking towards Broughton, Goseland Hill and Tinto

I'd done the race once as an unfit teenager, so this time appreciated the gentler drop down a very steep slope to a gate. We followed the edge of a field, SE of Ratchill Farm, down to the road, just beside some surprisingly well-fortified security gates (with camera and flagpole flying Italian flag) at the farm road end.

We followed the road back into Broughton village, and since the Laurelbank tea shop was on the way back to the car, it seemed rude not to pay a visit. Coffee was good, chocolate cake was absolutely outstanding