Hares and a Tortoise on the Mamores

Hares and a Tortoise on the Mamores


I’d been watching a promising window of weather. By Friday morning it looked as though it would coincide with a brief spell away that I could snatch – between the first home game of the season at the Keepmoat (that’s Doncaster Rovers for the uninitiated) and the need to tile a floor back home in Warwickshire the following week.

The BBC, MWIS and metcheck all promised good things for last Sunday and Monday, before we were all to be enveloped in the midst of a low pressure system by Tuesday. With a new Terra Nova Laser to christen, the prospect of starting at one end of the Mamores and seeing how far I could get over a couple of days was an idea that had been nursed for a while. Its time had come. So, barely an hour after a draw had been salvaged by a last minute penalty, I was heading north for a stop-over in Glasgow.

With the weather set fair, time wasn’t pressing the next morning as I set out for Kinlochleven. That’s my excuse for a relatively late and lazy start by midday from the car park next to the church. Now the most difficult and potentially embarrassing navigational task of my day is usually tackled when leaving the car park or finding the way out of a village. With advice to ignore some signs and follow others, the five minute recce to find the right red route (ignoring the first sign) was time well spent.

It would have been nice to be able to enjoy the views behind as a distraction from the effort required to get the legs going. However, the dappled shade as the path wound its way through the woods towards Loch Eilde was welcome given the heat of the midday start from Kinlochleven. 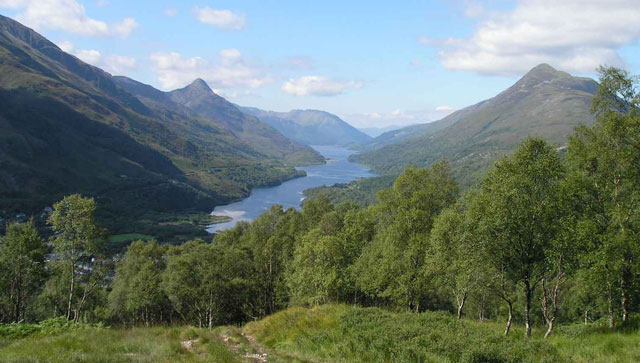 As the path ahead snaked its way across the hillsides to the east, I walked in anticipation of a glimpse of the first target of the day – Sgurr Eilde Mor. Frustratingly it didn’t appear until it reared up at quite close quarters, the steepness of all its sides seemingly energy-sappingly foreshortened. Any ideas of a traverse, complete with pack, were summarily ruled out as it could be left by the lochan. Unencumbered, the summit cairn was reached just short of three hours after leaving the car, and the views of the route beyond, alongside Ben Nevis, could be enjoyed. 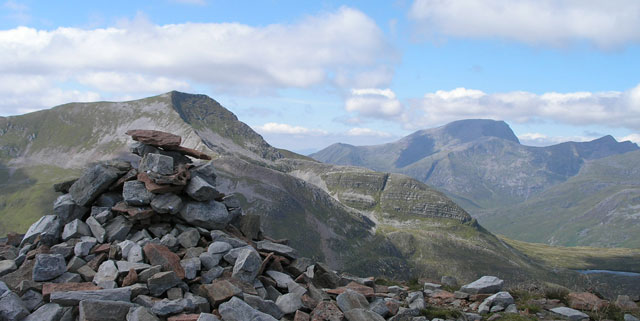 After retrieving the load, the forty five minute traverse on a good clear path round to the second Munro of the trip was surprisingly quick, despite the depressing drop into Coire a Bhinnein and climb back up to the lochan below Binnein Beag. As the air was much stiller in the coire, squadrons of the airborne beasties were gathering, ready to ambush anyone who had been complacently enjoying the slight breeze on the open hillsides. Maybe that’s why this particular part of the route passed deceptively quickly. Again, with the pack left behind, barely an hour was needed to be up and down this upturned keel and be ready to head off for what I knew would be the toughest part of the day.

Before setting off, this particular tortoise met the first of three hares to be seen on the trip. A sense of achievement at scaling the last of ten-in-a-day, was being tempered with a sense of dread at the length of Glen Nevis to be covered before his car could be reached. Lightweight was the order of his day – coupled with energy jels and a whippet-like fitness – something that I felt far from at the time. 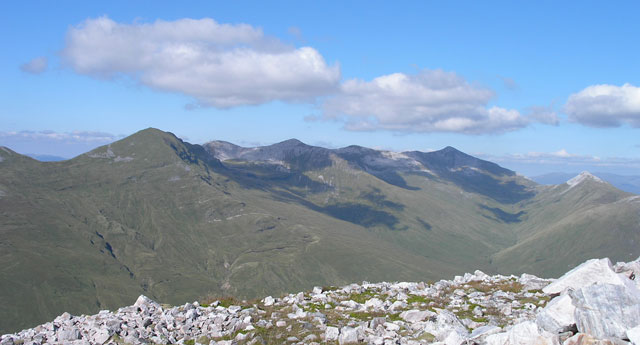 As the hare set off up Binnein Beag, I was beckoned by the steep grassy slopes leading to the nose of Gualainn a Bhinnein Mor. They were in merciful late afternoon shade as I began to plod. Rhythm. Cadence. Metronome. Tempo. Just keep going. Elephants and small bites. We all know the pattern.

The weight of an additional two litres of water began to make itself known as I inched up towards the ridge above. Remind yourself, it’s the biggest of the trip, and you can stay high in the good weather tomorrow with the worst behind you: all the little mind games. If only.

A breathless hour and a quarter later and I was enjoying the view westwards along the ridge, across to Ben Nevis, and miles beyond and around. There’s nothing like a sense of achievement and arrival to provide a shot in the arm, a kick up the bum, a second wind, or in my case, a third or fourth wind. Soak it all up, drink deep of the spectacle all around. Chill, take your time, and pick a place to perch for the night between Binnein More and the fourth Munro of Na Gruagaichean.

After nearly an hour just gazing into the distance and picking out familiar and unfamiliar tops in the distance, the second hare of the day appeared. This one was lagging behind the earlier one in both time and tops. By now it was nearly 7.00pm, he was about to make it eight out of ten and still had the slog down the Glen to go. I don’t think Eilde Mor was going to be visited, and it was touch and go whether or not Binnein Beag was going to be ticked off either. I may be proved wrong with a gloatingly posted report.

The time had come to christen the Laser in an interesting location and replenish some calories. The first was easier to do than the latter – I’d brought the stove, the food, the pan, the spork – and forgotten the canister of gas.”Plonker” was the mildest of rebukes as I devoured the following morning’s breakfast instead of the culinary delights promised in a sachet of chicken mushrooms and pasta. Whatever. Did it really matter? Given the setting, I’d have been happy eating anything. To the harrumph and cough of stags in Coire an Easain below ,and the occasional midge fended off with Avon’s finest, I called it a day.

Evening light on Buachaille Etive Mor and others from Mamores 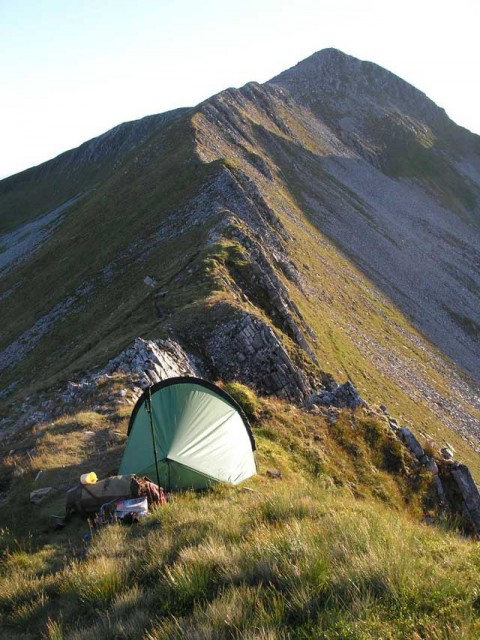 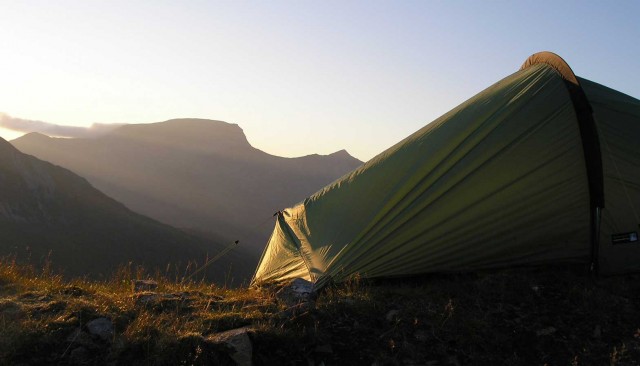 Midnight, and every star could be seen. Morning, and nothing could be seen. At six I was suspicious: it was light, but not bright. The sun should have peeped over Eilde Beag by now.

8.30 am – unzip – clag – read a map – I’m one of those folks who can look at a map and read it like a book, spend hours just interpreting everything it’s got to share – seeds of nagging doubt are sown.

Despite the lack of visibility I thought I could get to like this - my first Munro of the day in just fifteen minutes as Na Gruagaichean appeared out of the mist. But, despite another wait, the only thing that appears is the path to the bealach and its northern top. Maybe I was being ambitious and optimistic, maybe the weather will perk up in the afternoon. So I waited at the next bealach before Stob Coire a Chairn. And waited. And waited as the mist occasionally cleared below and gave a view down into Coire na Ba.

Resigned, I began the next ascent into the mist when the rattle of stones from Na Gruagaichean heralded the third hare of the trip, and this one was like a man on a mission. It was, I was later to learn, m16kra on his successful ten-in-a-day attempt. We exchanged grumpy comments on the quality of weather forecasting and headed off in the same direction, but at markedly different paces.

A brief window showed a glimpse of the ridge to An Gearanach from Stob Coire a Chairn, and amazingly it stayed open for the hour it took to get there and back. Views down into the coires on either side made it a worthwhile jaunt, but looking west across to Sgurr a Mhaim, the mist seemed thicker and more persistent, and Am Bodach was nowhere to be seen. There seemed little point in doing the ridge without the views, and I was less confident about tackling this bit of the route in poor visibility. So far, the routes had been clear and paths well defined and obvious – I wasn’t so sure about the next stretch. 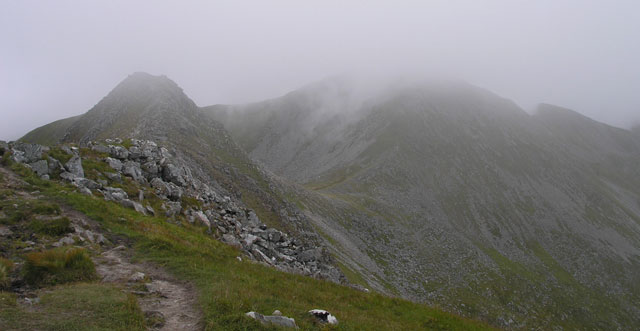 Stob Coire a Chairn from An Gearanach

So, the decision was made, this tortoise would leave the hares to their day and head back over Stob Coire a Chairn and back down to Kinlochleven. Six out of ten was ok for me, and the four remaining would make another good day out in the future from Glen Nevis. 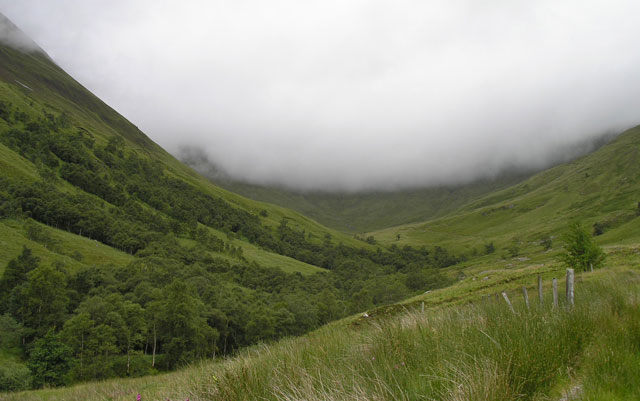 The descent back to the car certainly gave different views from the day before, and the tiling had to be done.

A dull and driech Loch Leven

Sunday was phenomenal though - you certainly got a good day there. I've never wild-camped up on the Mamores but it remains on the to-do list.

!!! Fantastic pictures from Sunday......was obviously the day to be out! My boots are still drying out 3 days later!!

Had to assist the couple we met on An Gearanach...could hear them in the distance discussing how lost they were!!

Argh! I was all set to camp near Sgurr Eilde Mor Sat night and do most of your route that Sunday but decided not to after Saturday's claggie day on Nevis. Even more angry with myself now! Excellent write up and pics, makes me eager to do this before the days shorten.

Stretch wrote:Argh! I was all set to camp near Sgurr Eilde Mor Sat night and do most of your route that Sunday but decided not to after Saturday's claggie day on Nevis. Even more angry with myself now! Excellent write up and pics, makes me eager to do this before the days shorten.

That is both the yin and the yang of webcams and walking websites - 20yrs ago you could have tucked up in St Andrews and assumed sunday was no better. Nowadays you can get up and check - and then watch the reports roll in. Frustrating when you choose unwisely