Another 4 Donalds a different way

Another 4 Donalds a different way

This was a kind of short notice venture back down to the Borders, one has to try and make the most of the 'unseasonal' dry spell and Donalds are an ideal destination

I did my usual research and although there are only a handful of reports for this group, most of the previous visitors either tackle them from the south or visit them as part of different groups. I for one reason or another had these 4 sitting close(ish) to each other so I thought why not plot out a route and go for it and that is exactly what I did. I knew the problem would be getting from Cramalt Craig to Greenside Law with plenty of going down and then back up.
I knew the walk would take approximately 5 hours (according to Naismith) so I just got up at the usual time and then set off to battle with the usual Edinburgh commuters

If anyone reading this is a regular commuter you really do have my sympathy, I find it so frustrating stopping and then starting

It took me about 90 minutes to reach the start point and I was on my way just after 9.30am 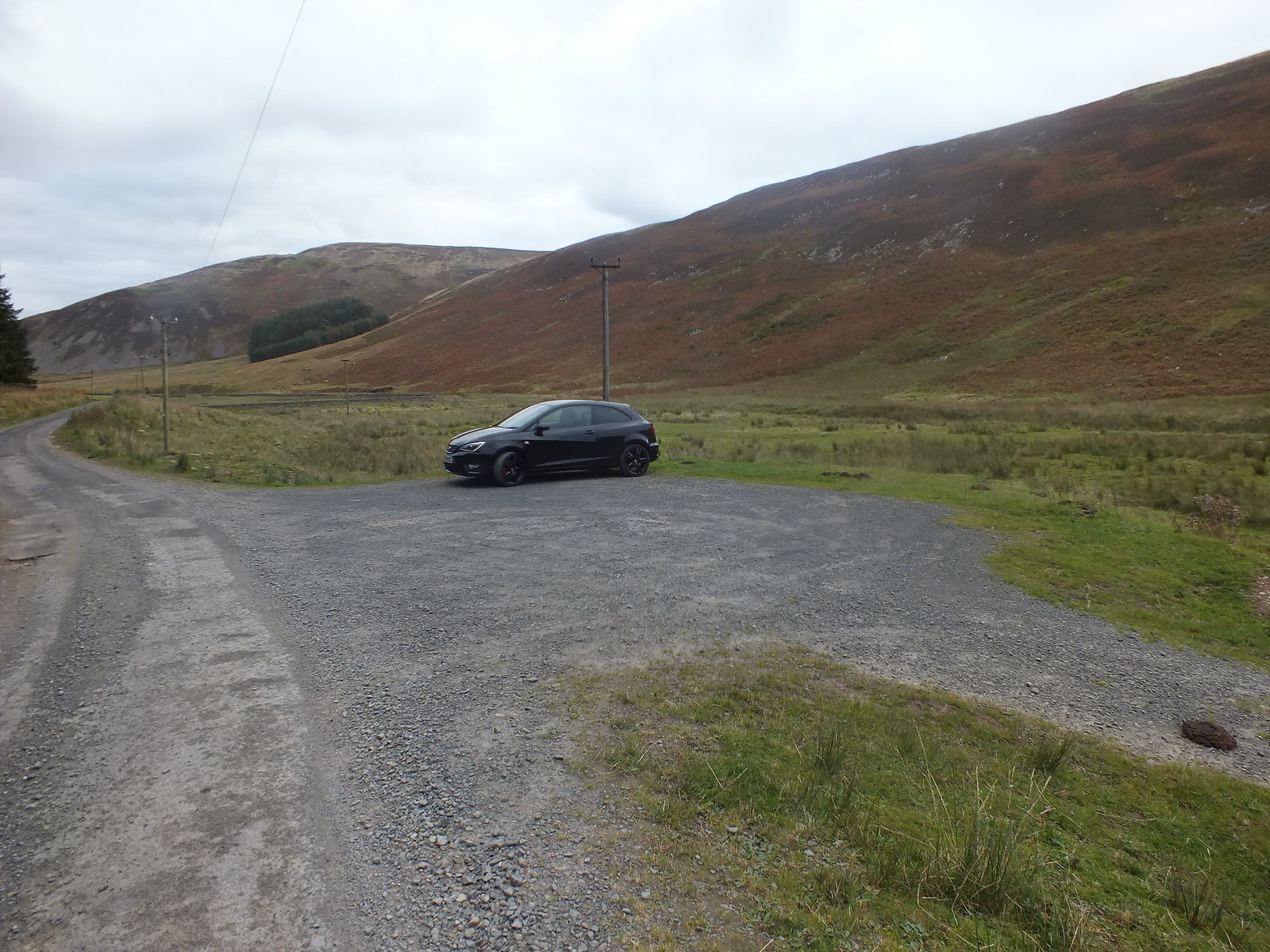 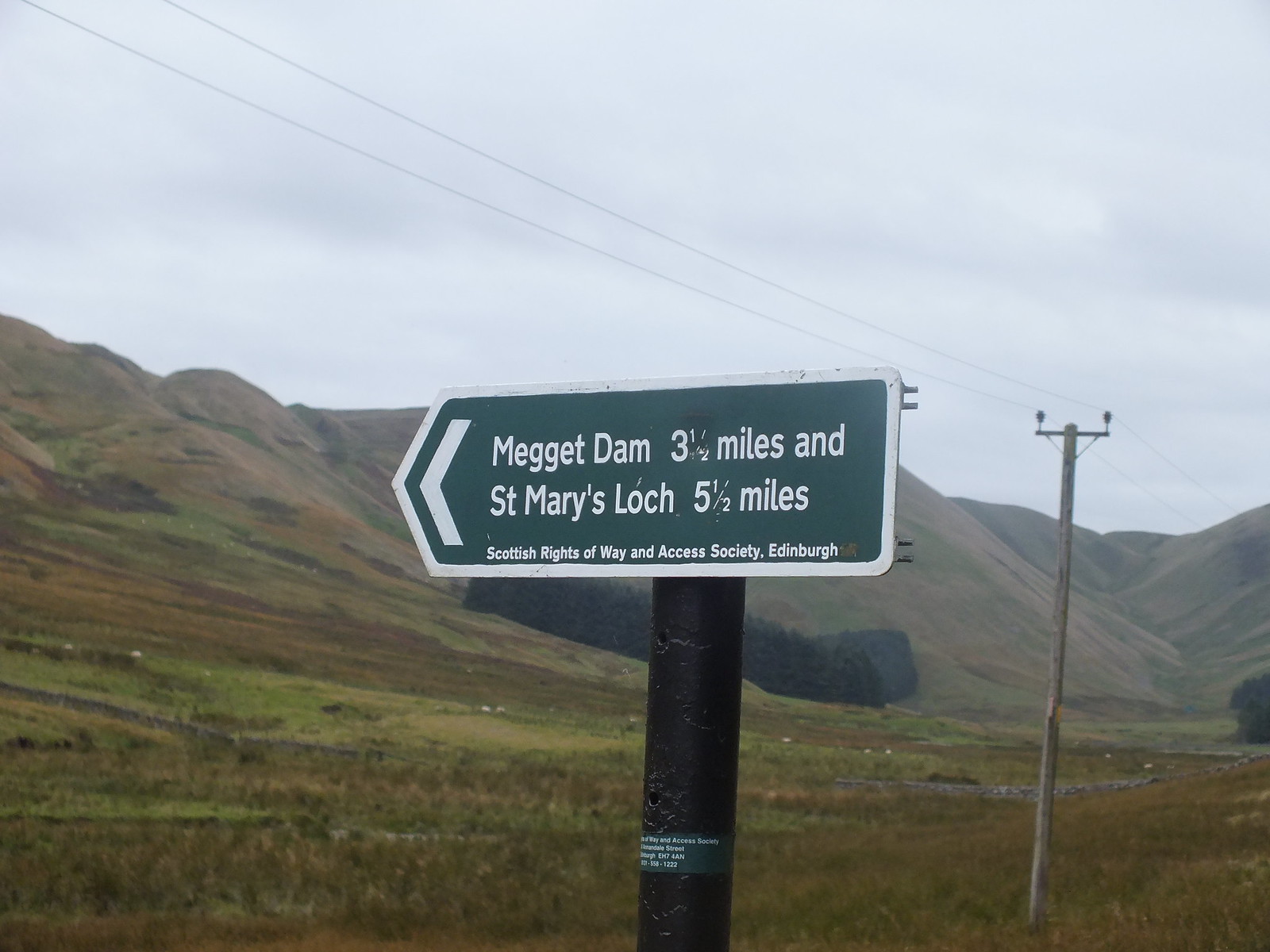 Not the way I was heading 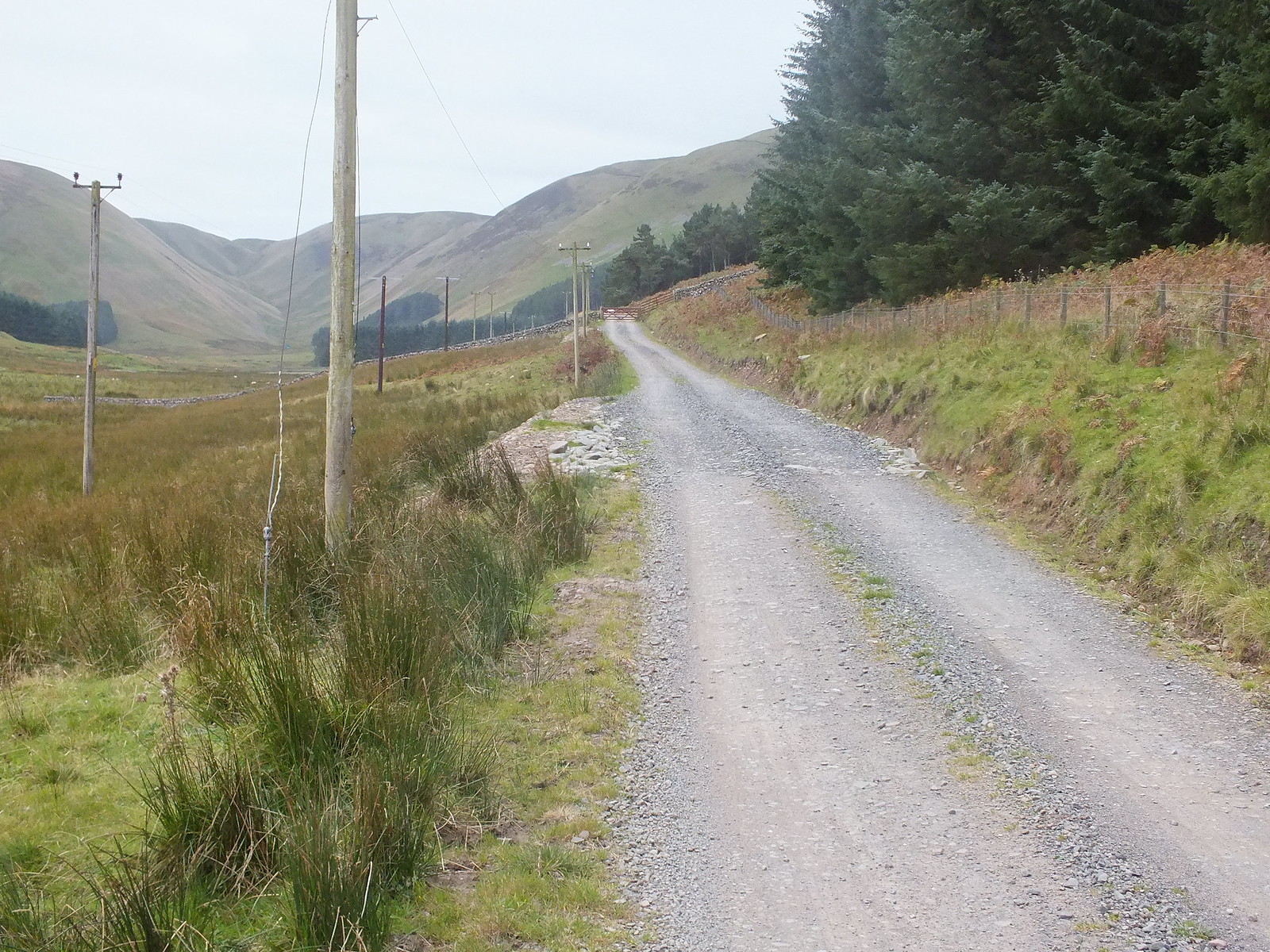 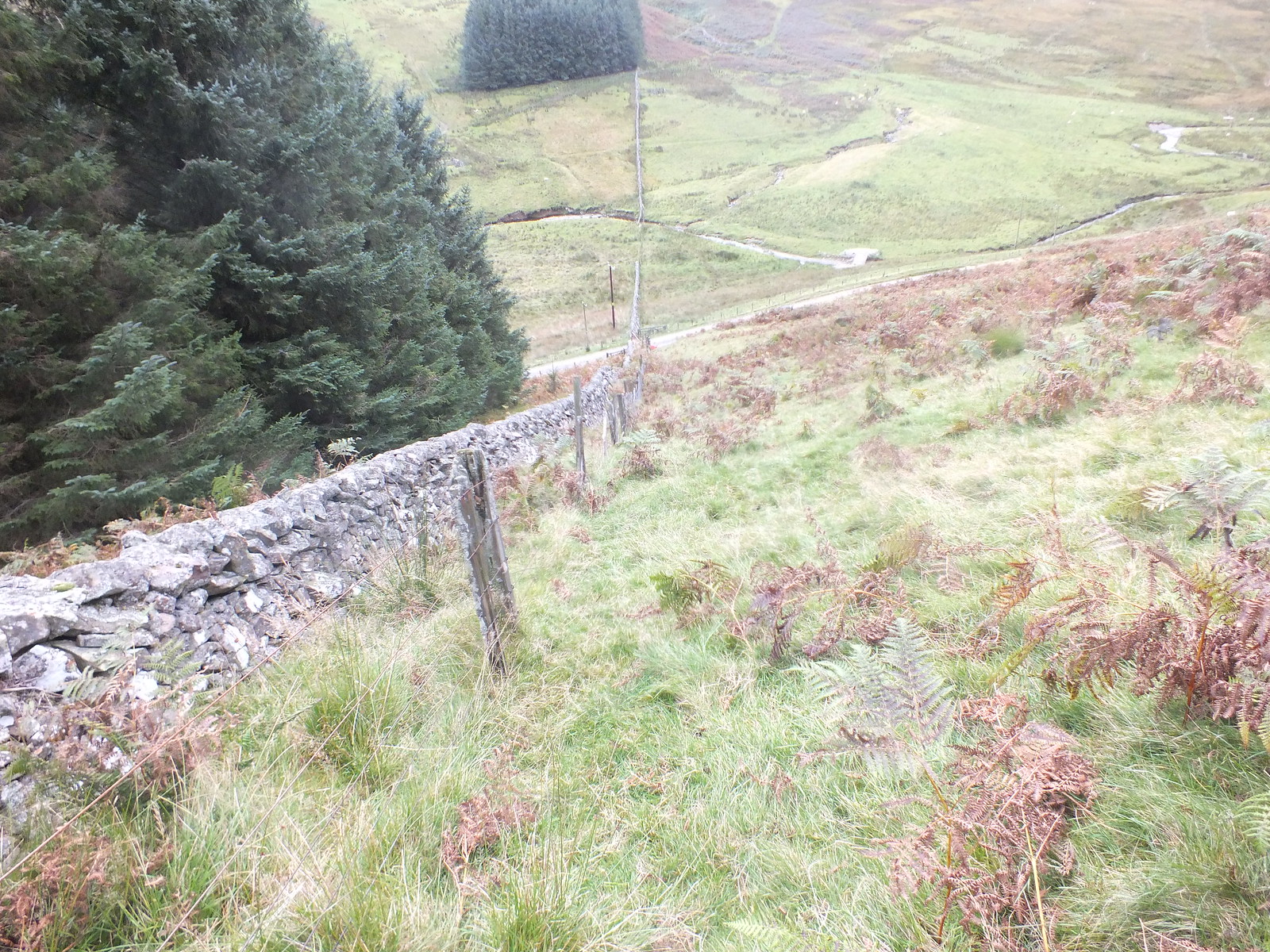 First photo looking back down 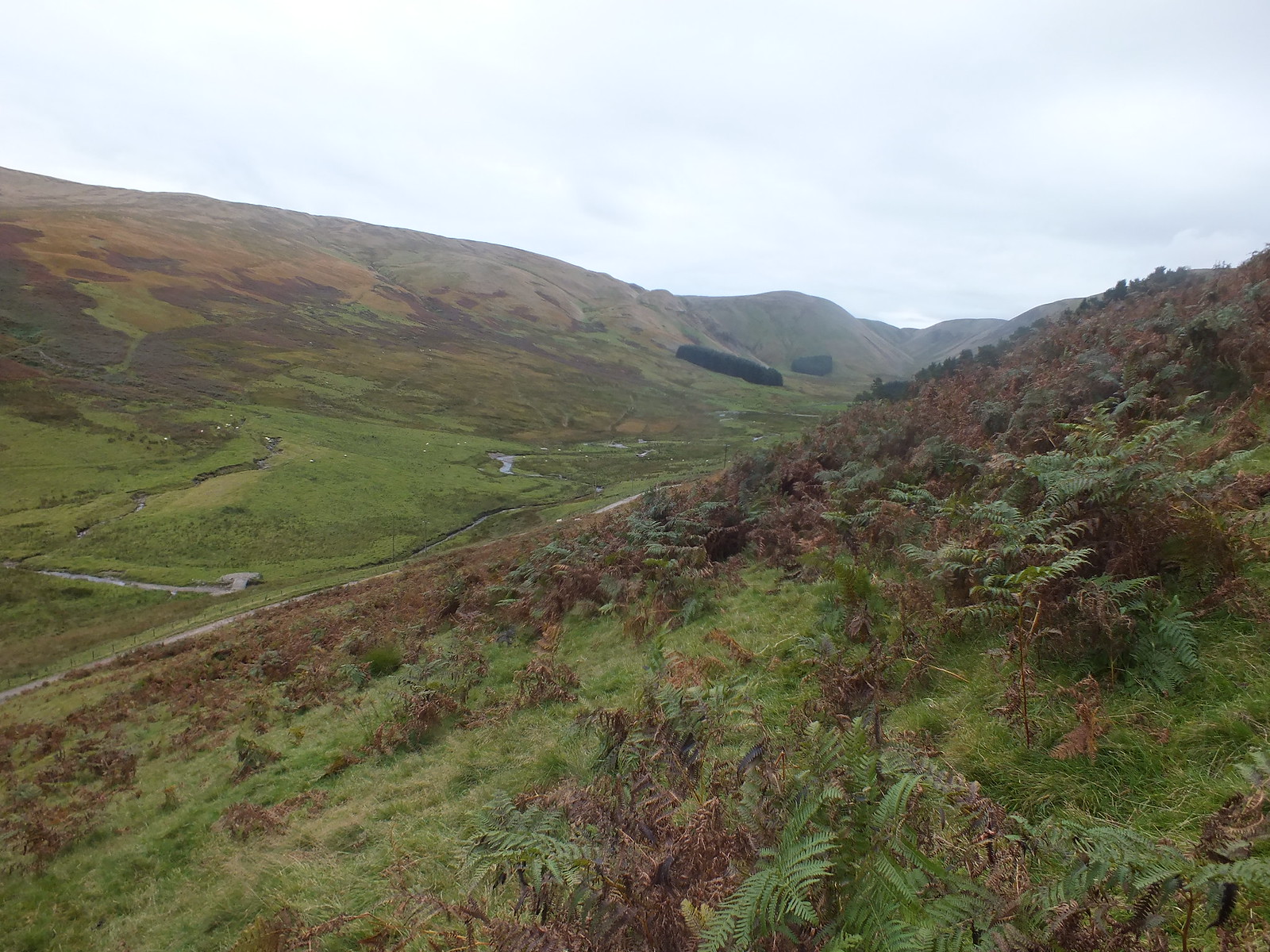 Looking across the glen 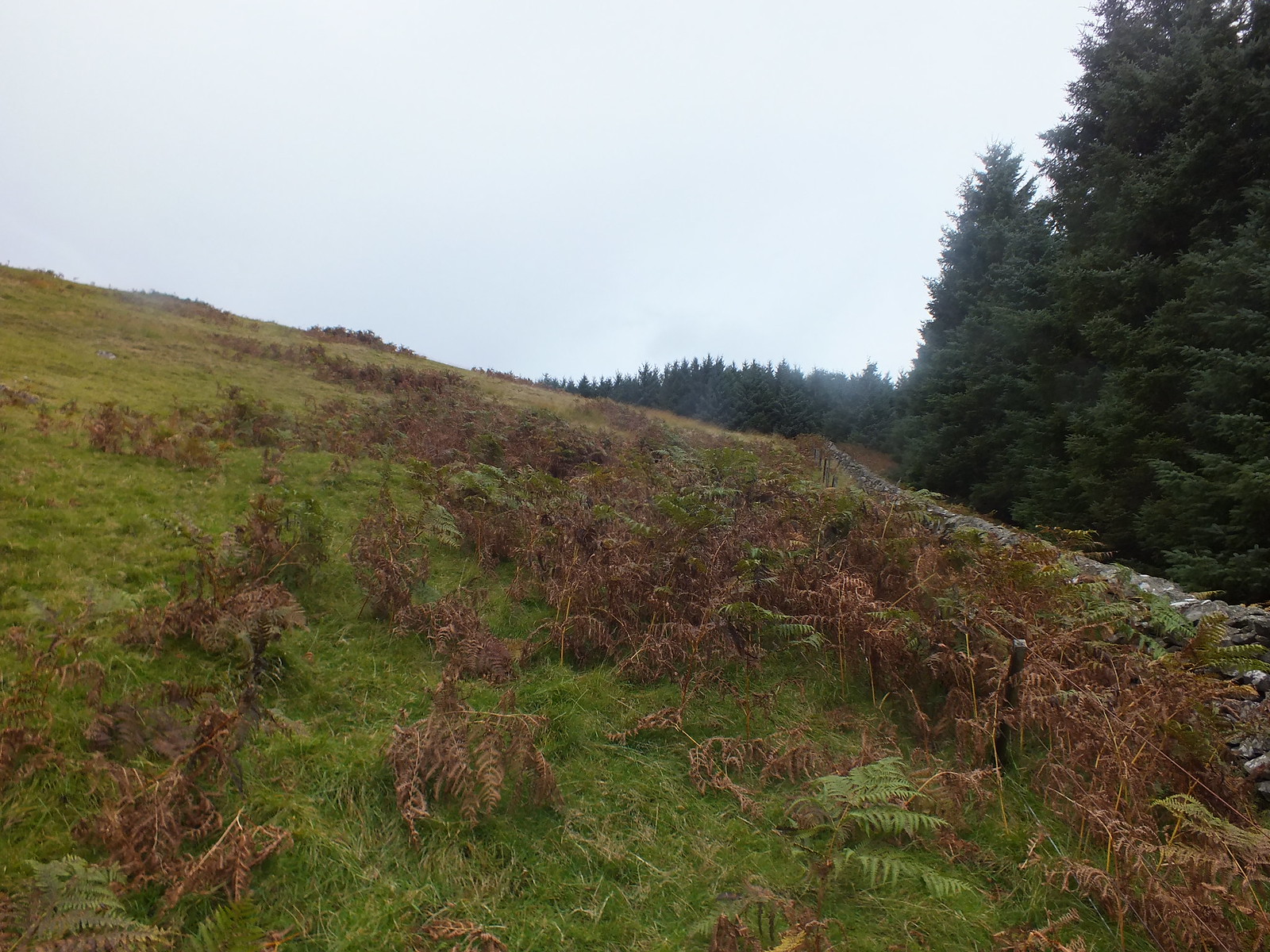 The way up, trying to avoid the dying bracken 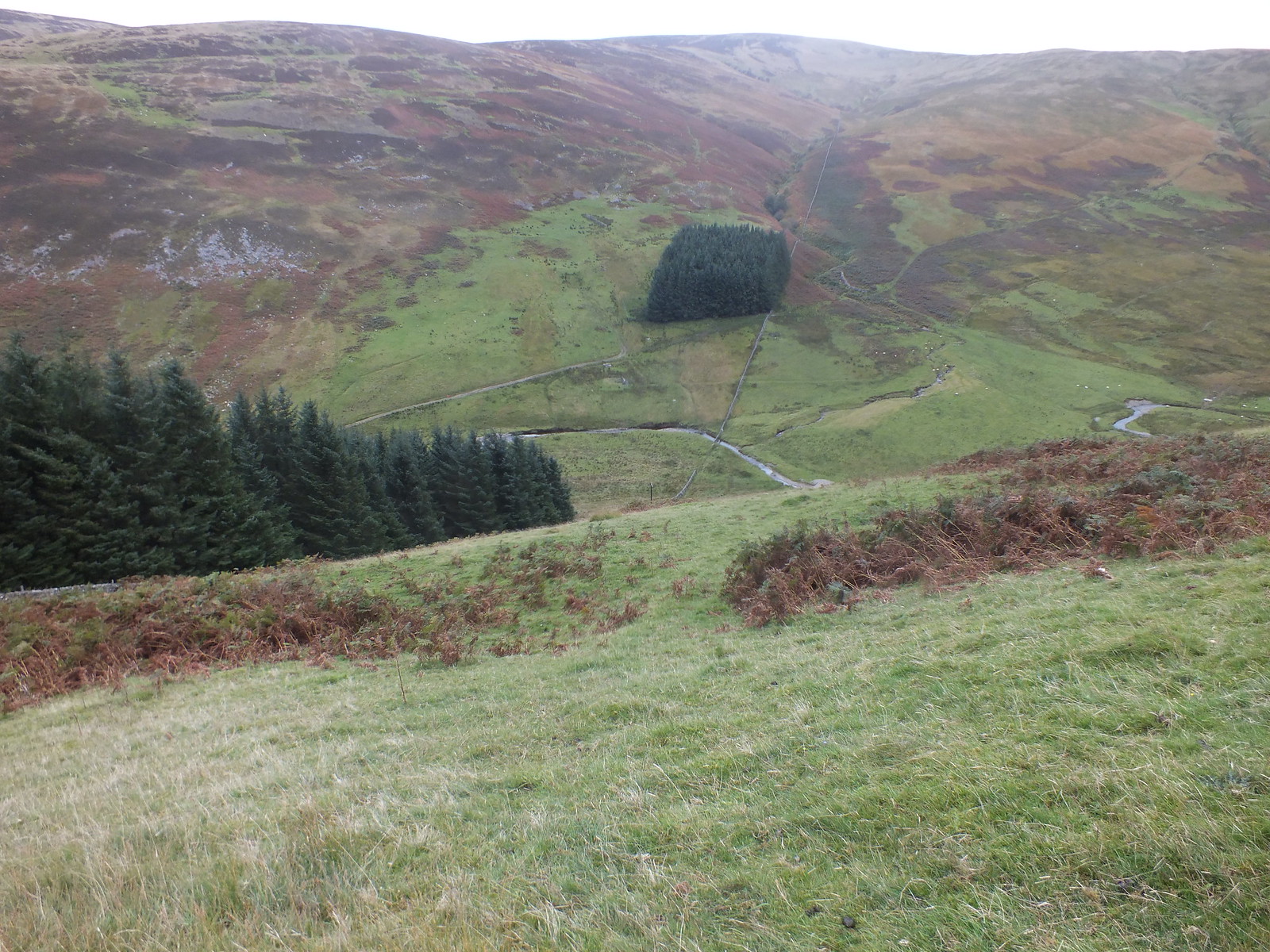 Looking down from slightly higher up 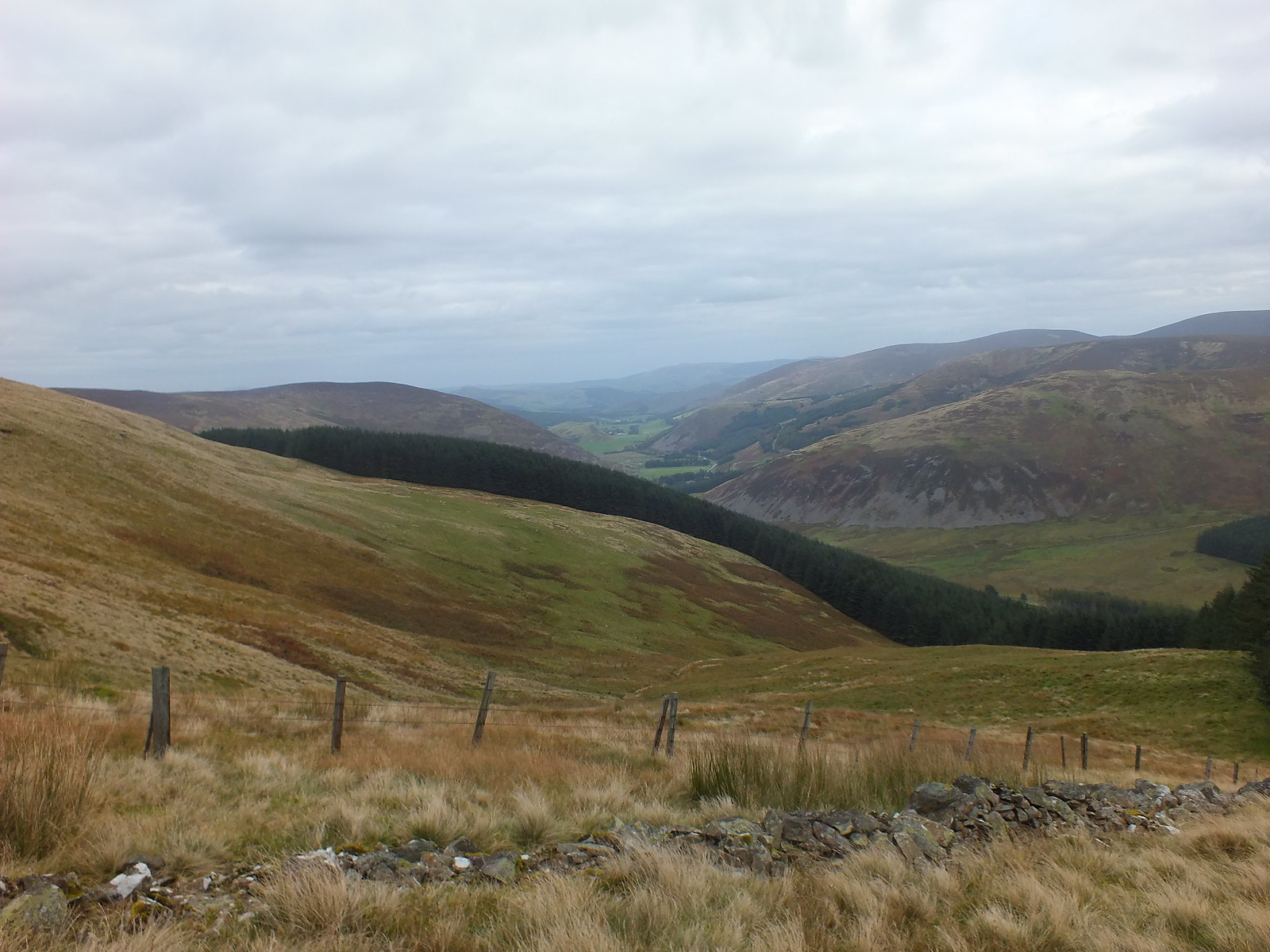 Looking down the glen to the north 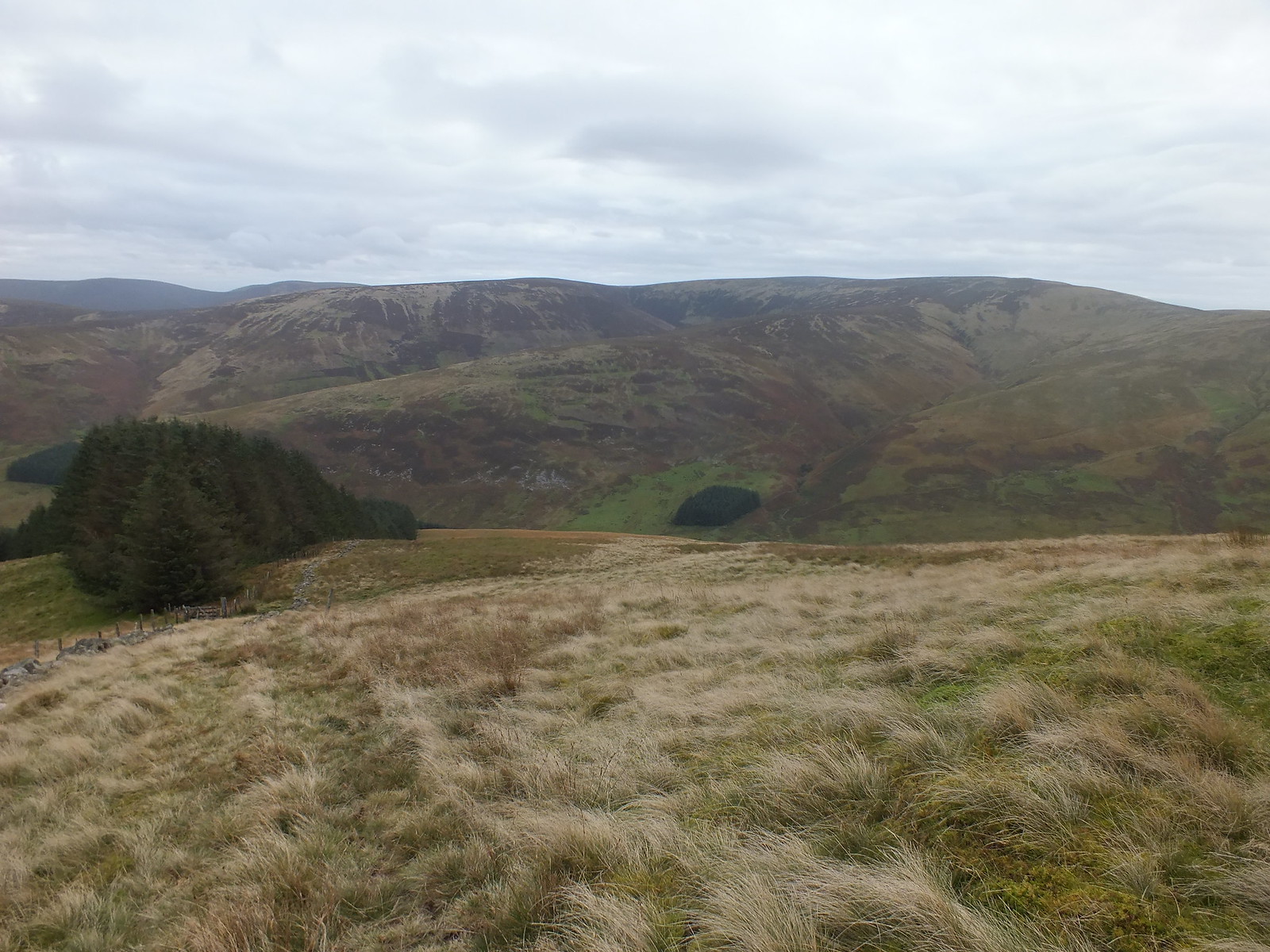 Looking back down having followed the wall uphill

Word of warning as soon as you leave the track the going up starts in earnest, there is a faint path and as you gain height the path merges with an ATV track which makes walking uphill slightly easier. I reached the summit of Dollar Law in an hour after lots of huffing and puffing and stopping to take a few photo's 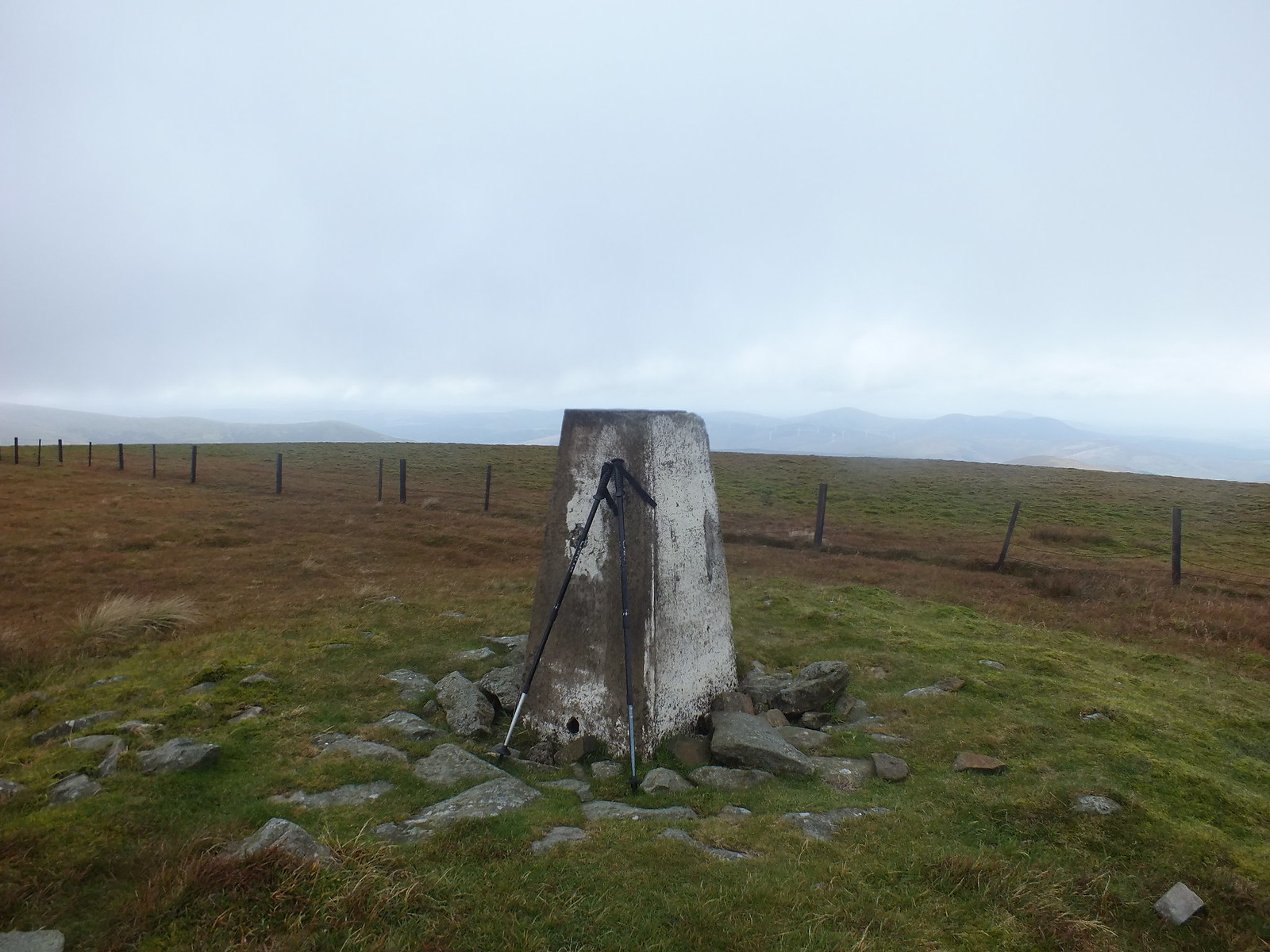 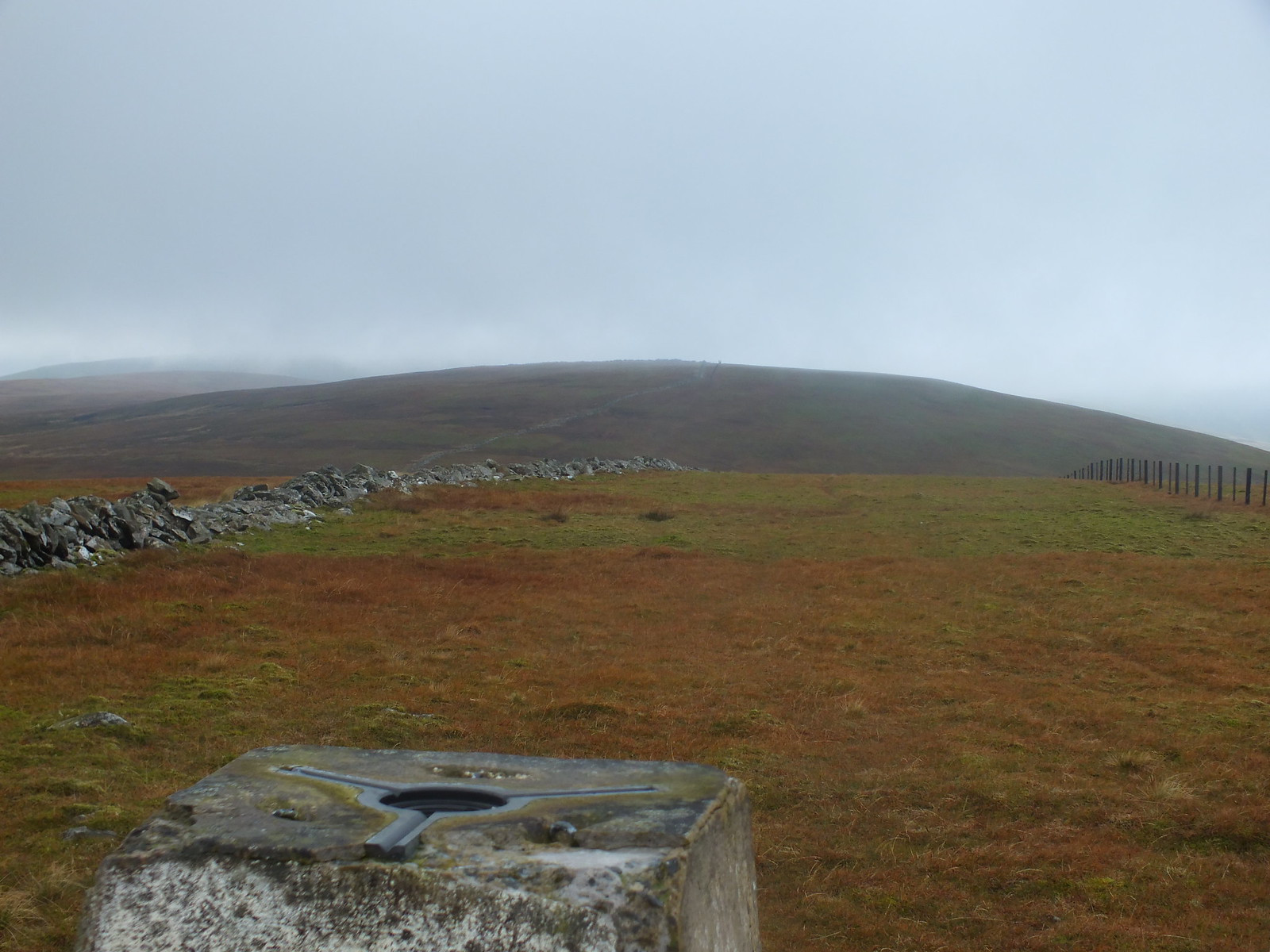 The way ahead after Dollar Law

Once I reached the summit the wind had picked up a bit and the temperature had dropped quite a bit, and I had to root out my woolly hat and gloves for the first time for a few months

The route to the next port of call Cramalt Craig was a doddle, basically following a fence or a wall, I walked between the two

It took me 45 minutes to reach Cramalt Craig which was intermitently shrouded in cloud, a few photo's and I was off again 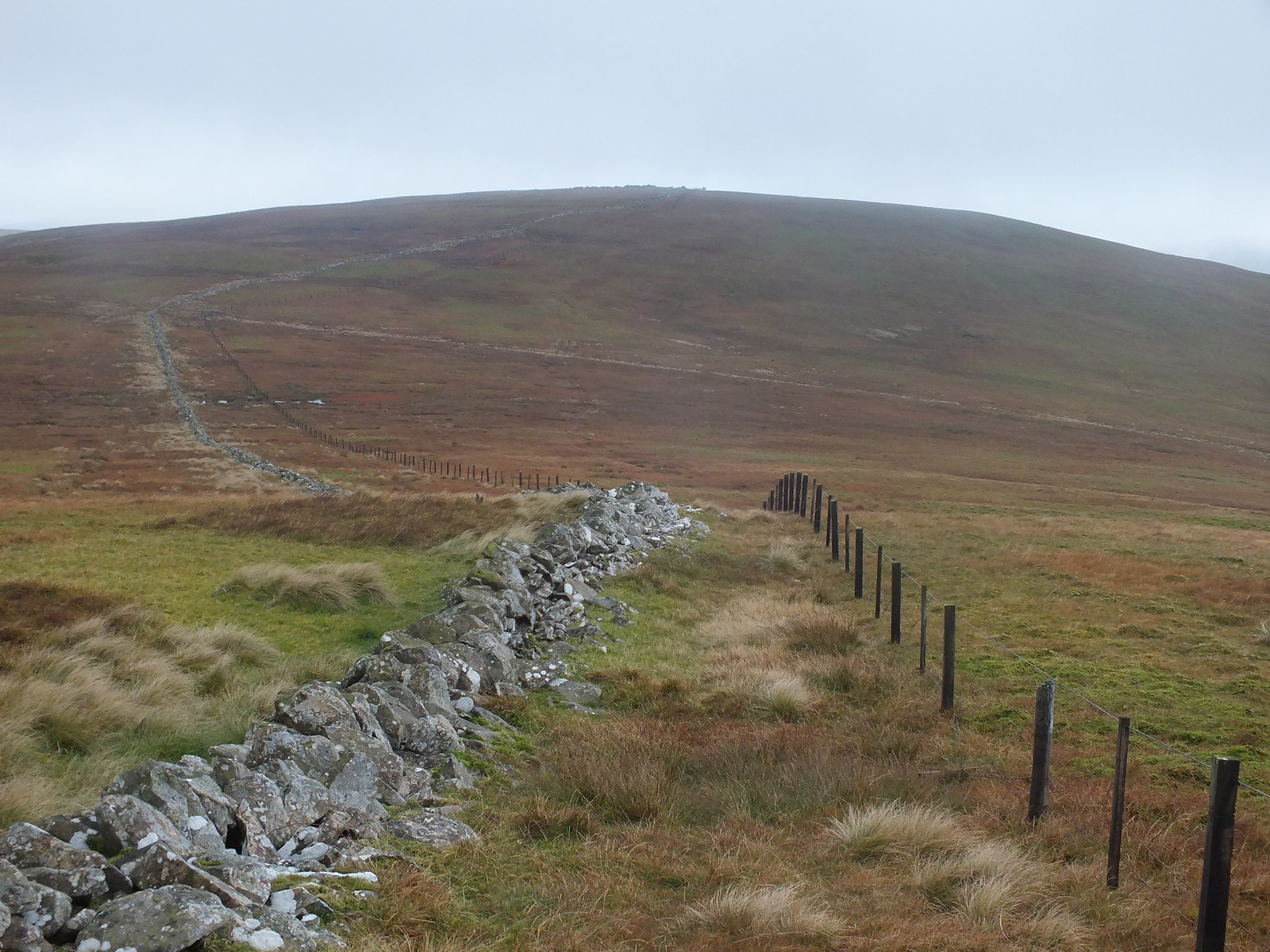 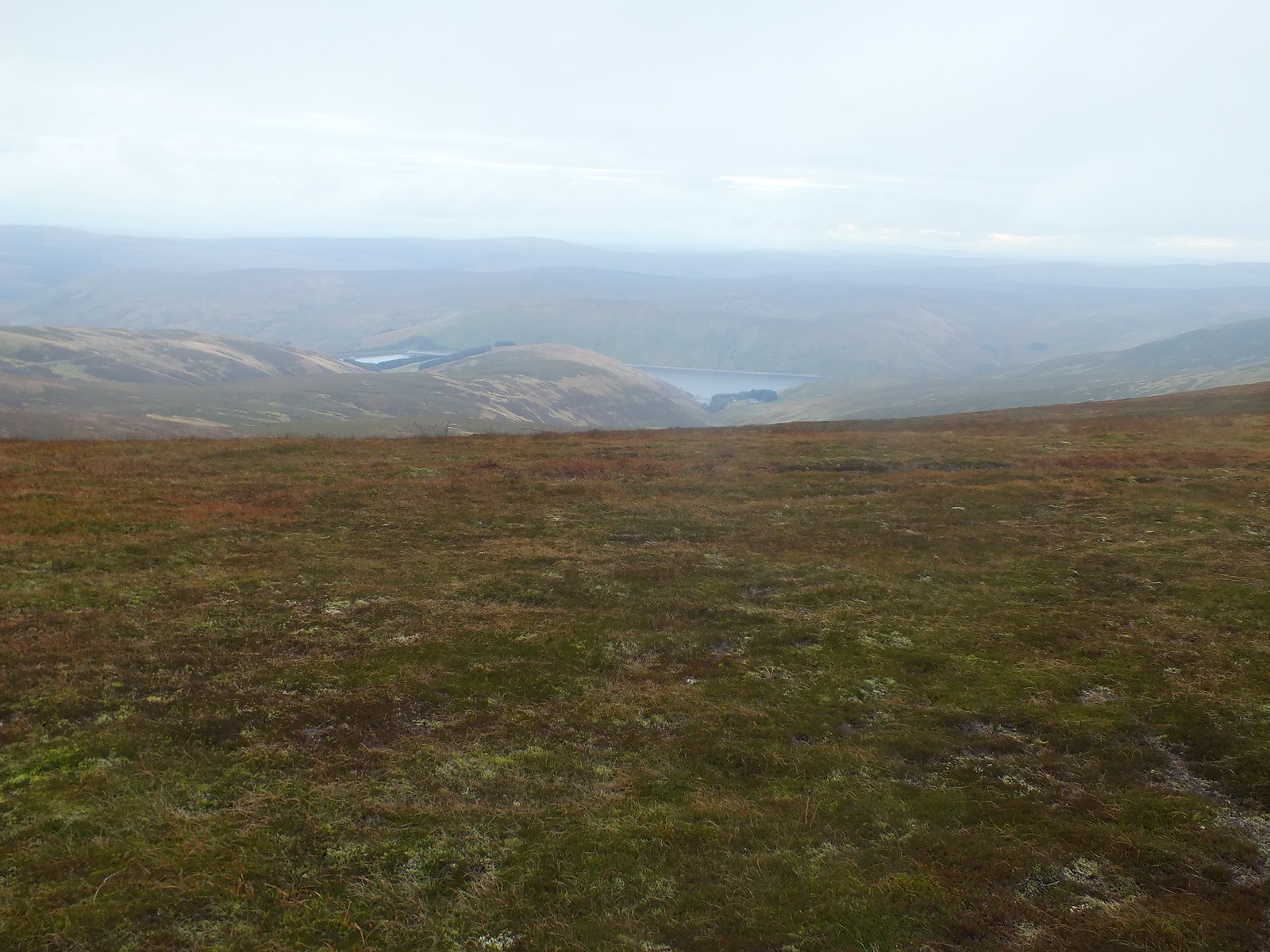 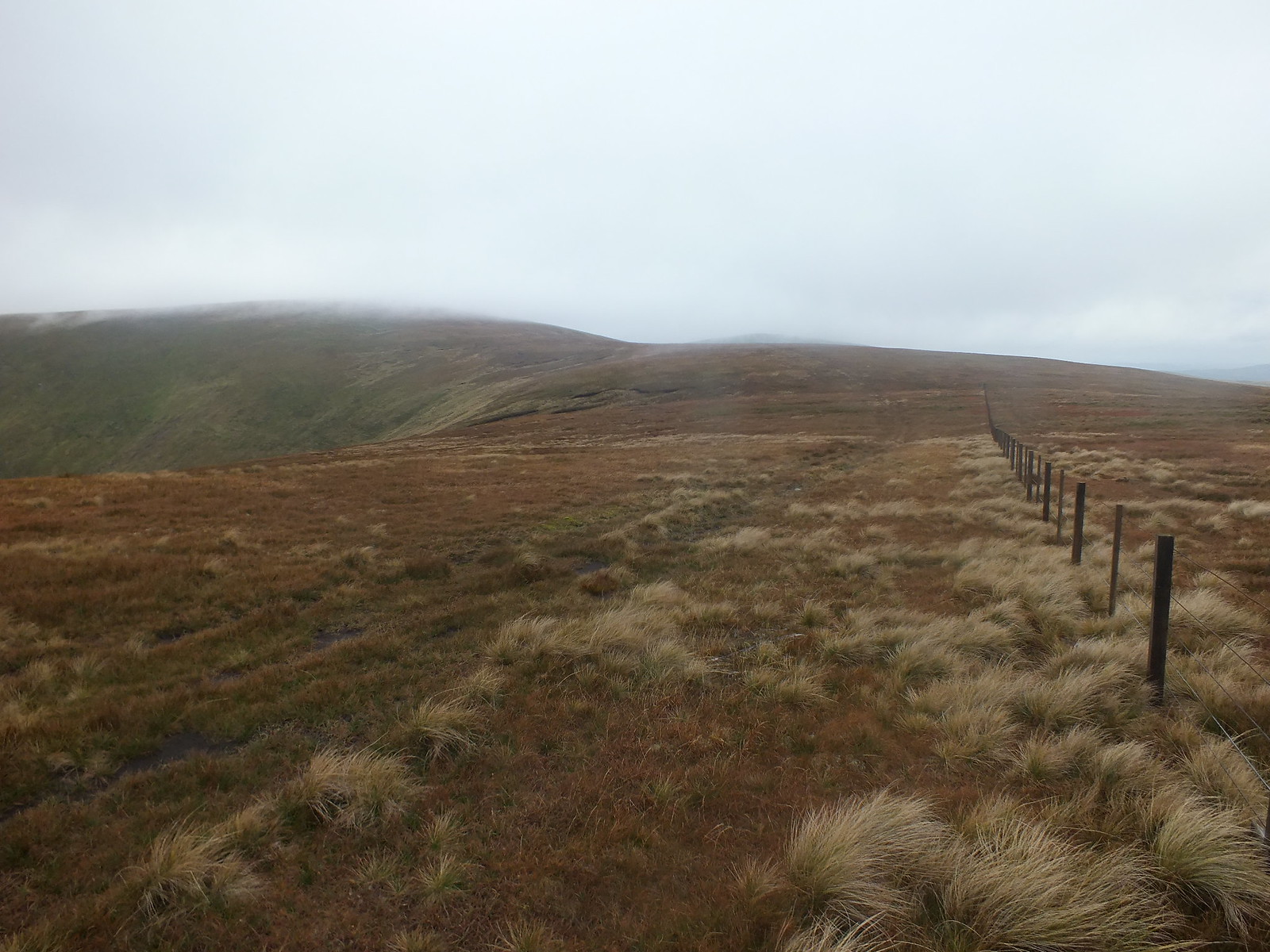 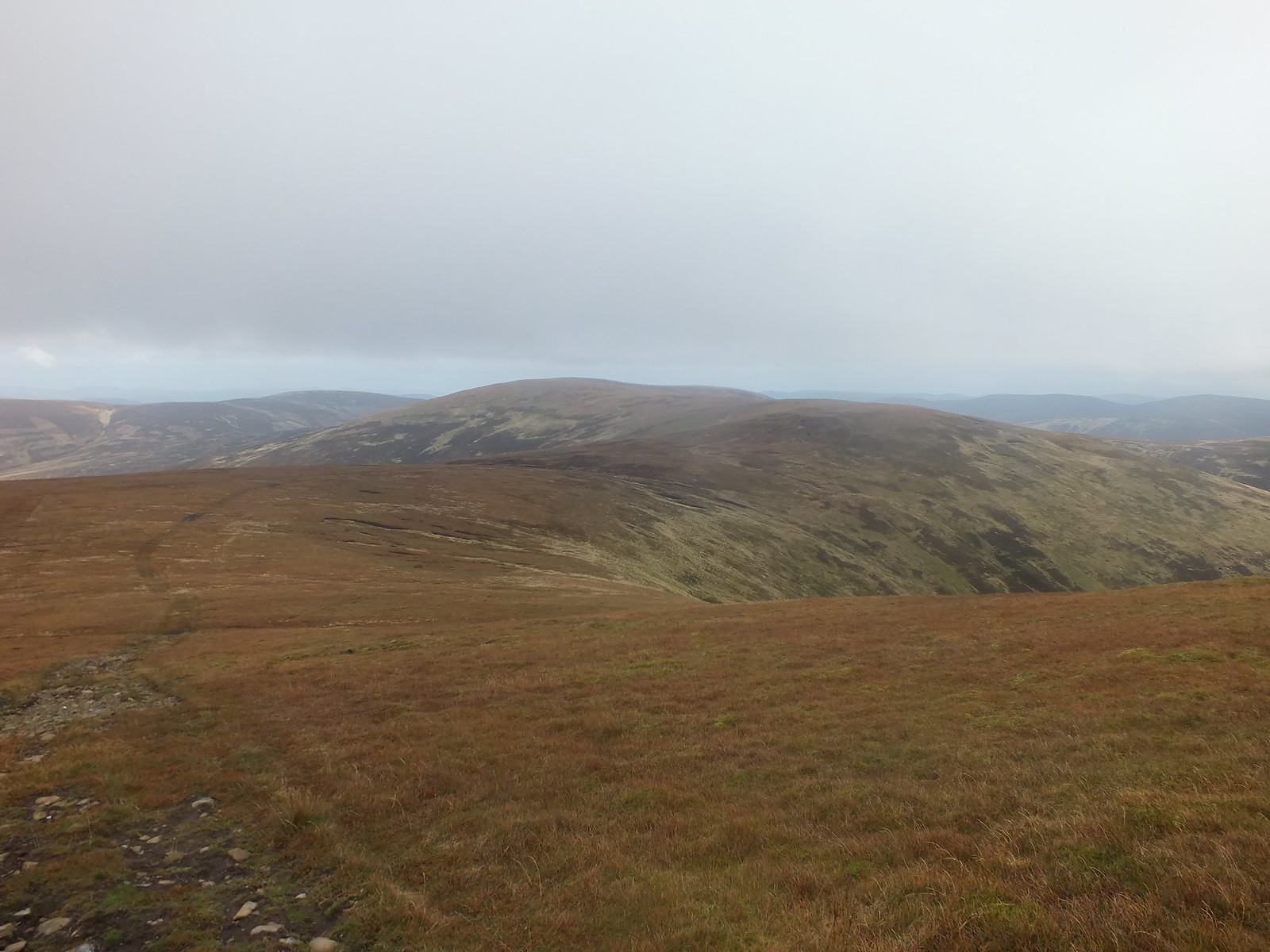 Looking back towards Dollar Law 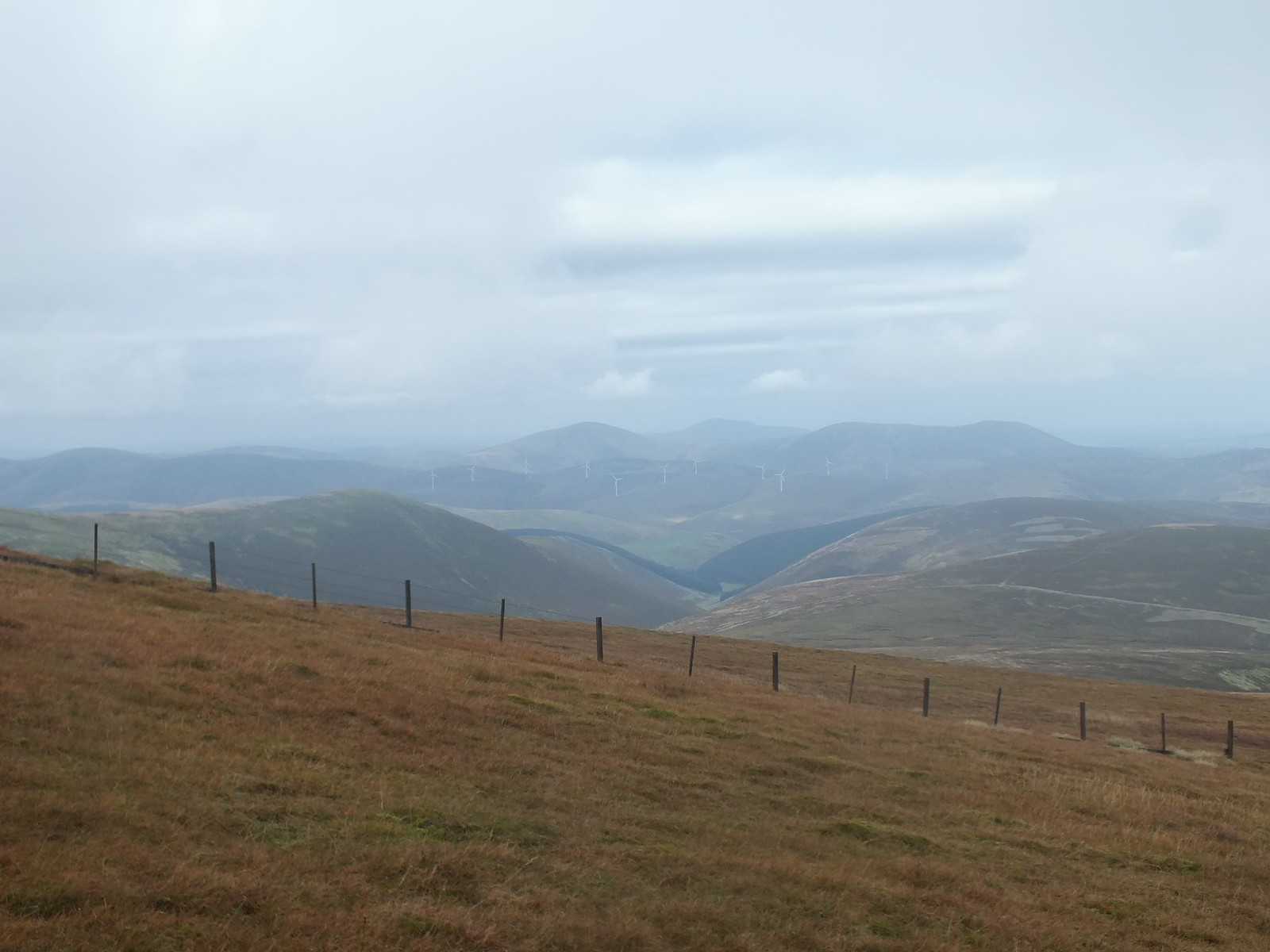 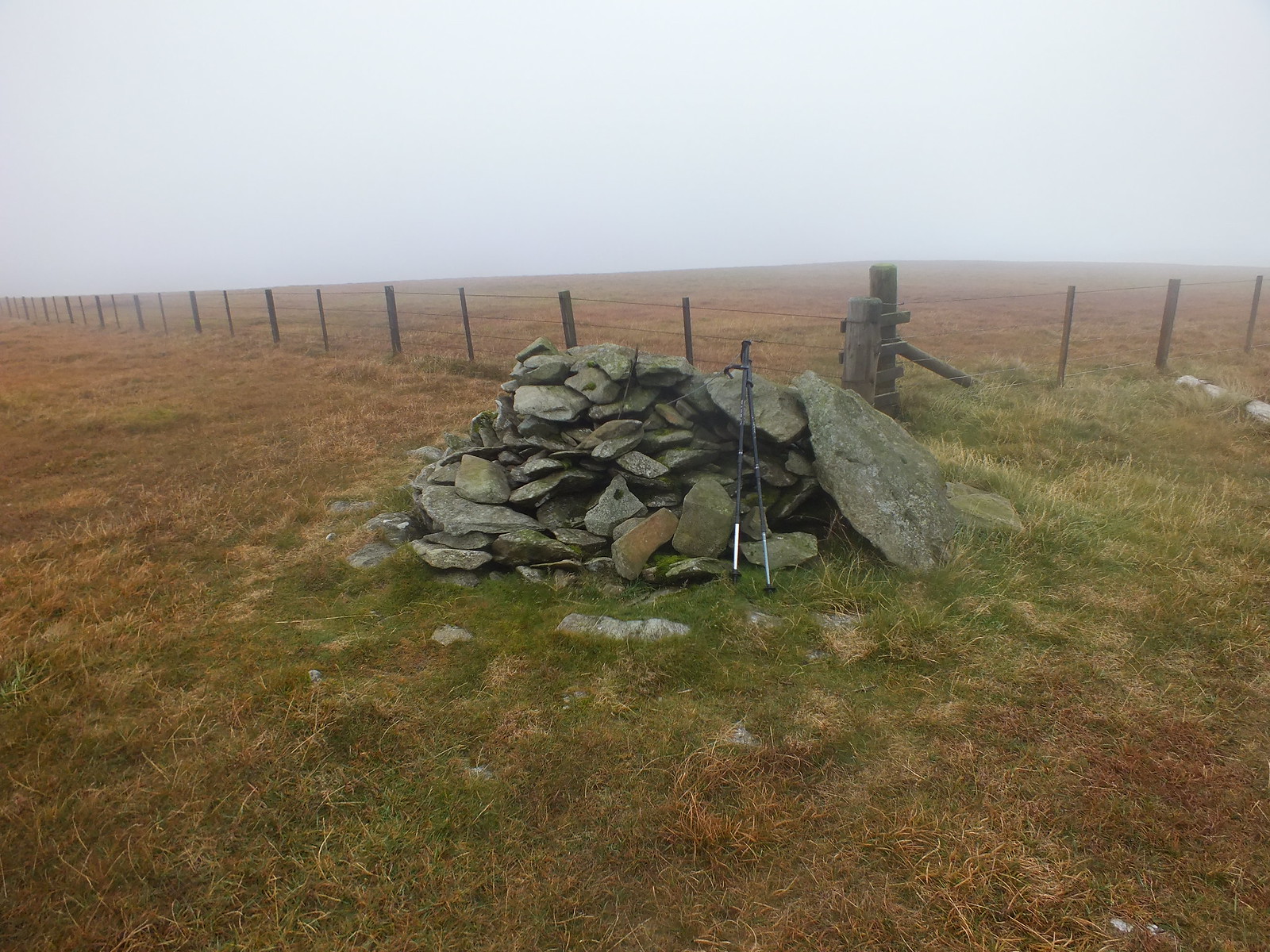 Cramalt Craig is a "demoted" Corbett and would be the high point of the day, so in theory it would be all downhill from here

There are a couple of shoulders heading east, the one directly from Cramalt Craig would involve much more descending and then ascending, so I opted to retrace my steps and head back towards Dun Law, but start descending before reaching the higher ground. As stated previously I knew it was going to be tough going and it certainly was, descending was easy however the ascending was basically a slog

I have to confess I haven't got a photo of Greenside Law summit, not quite sure why 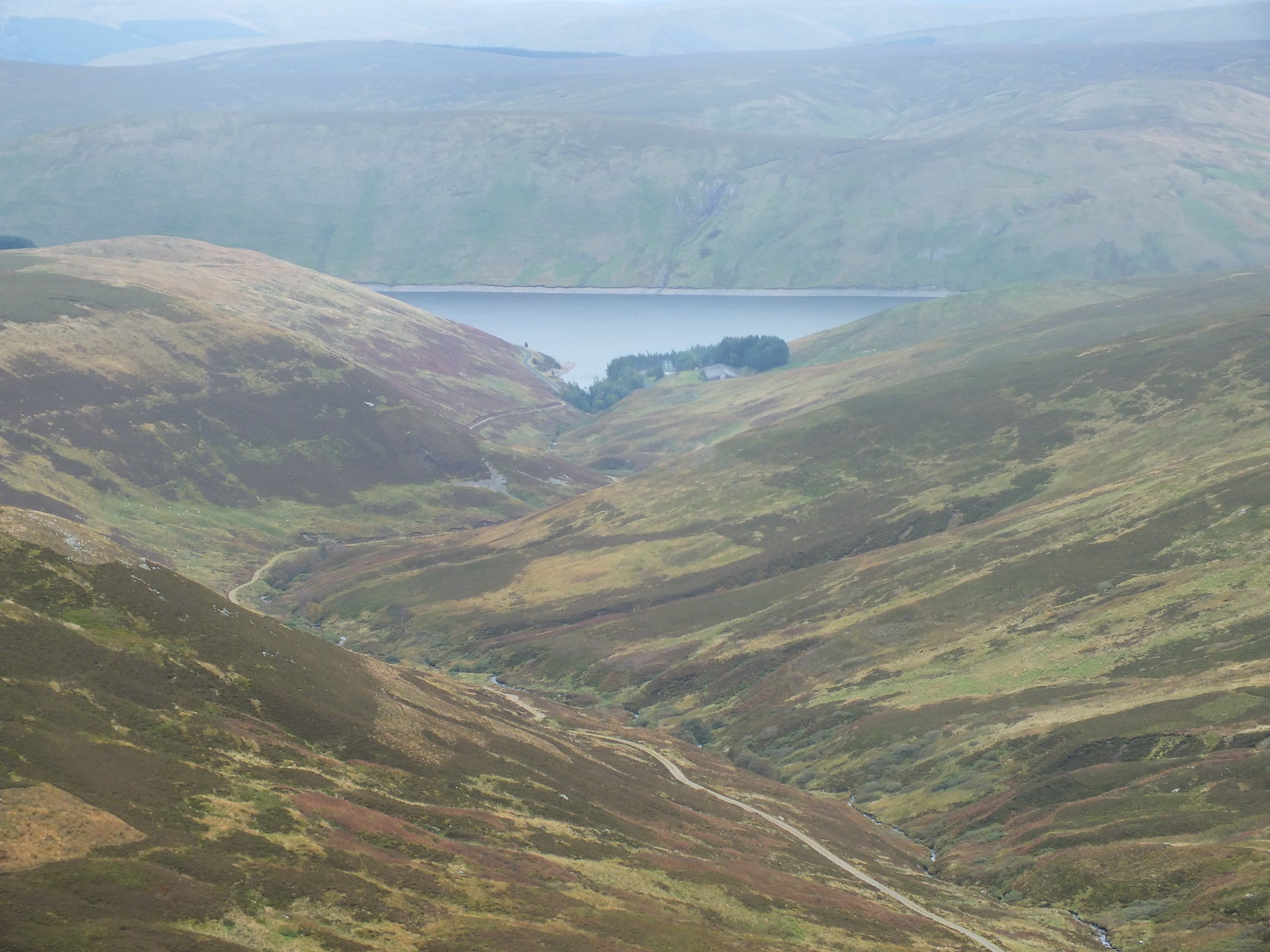 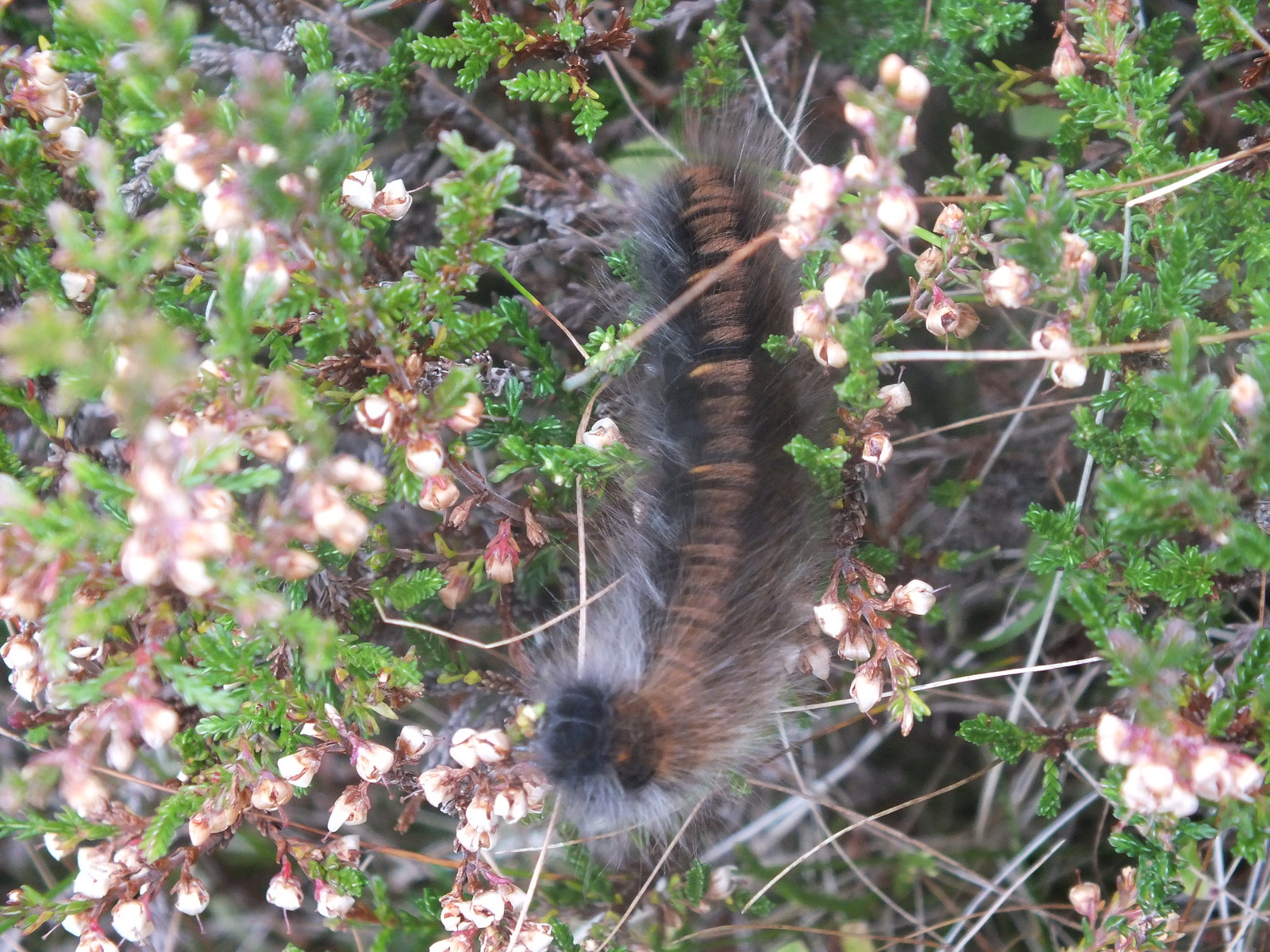 Some sort of furry caterpillar

After Greenside the trudge across to Black Law wasn't very interesting or exciting, there is a bit of a bogfest to negotiate 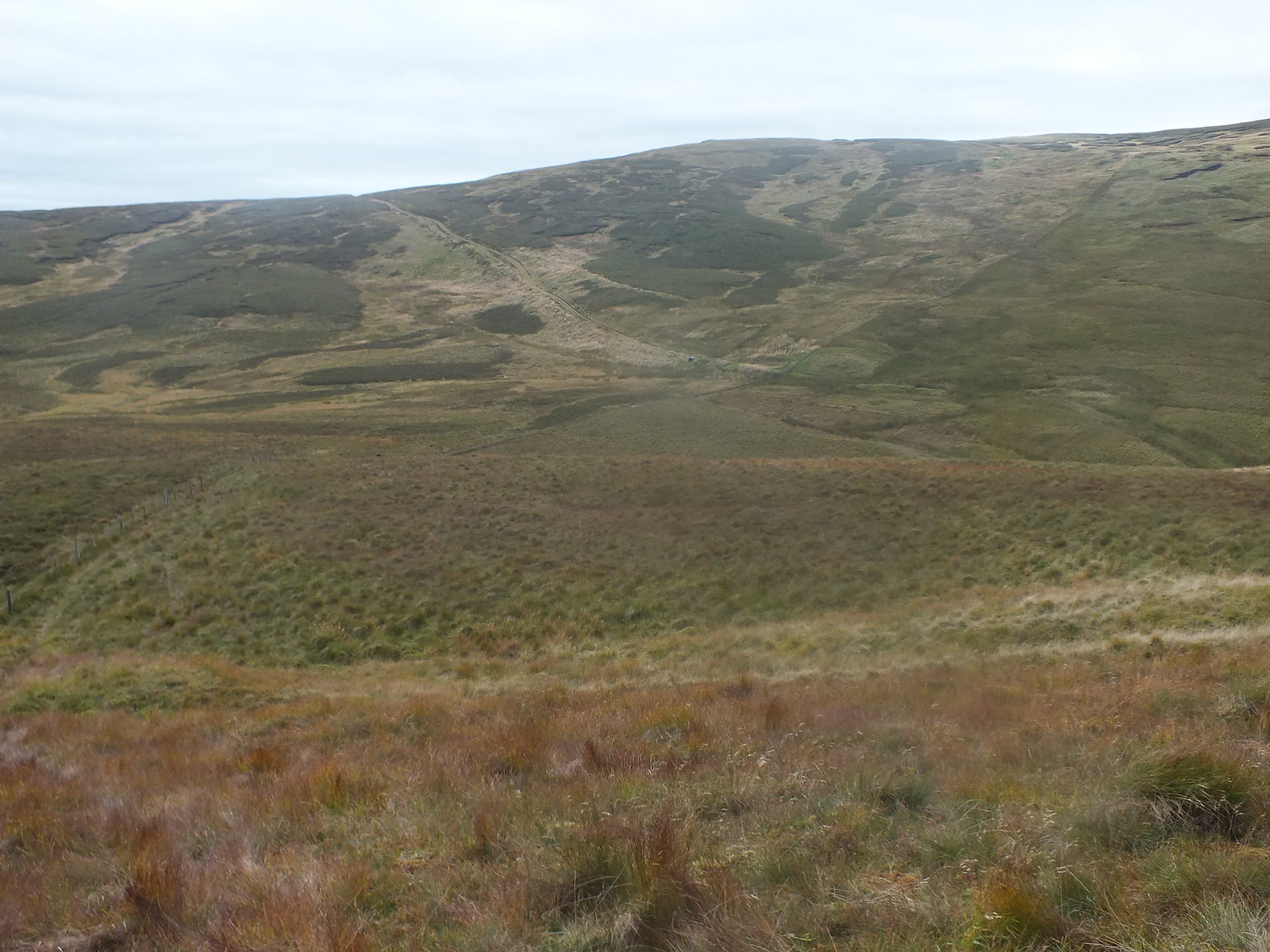 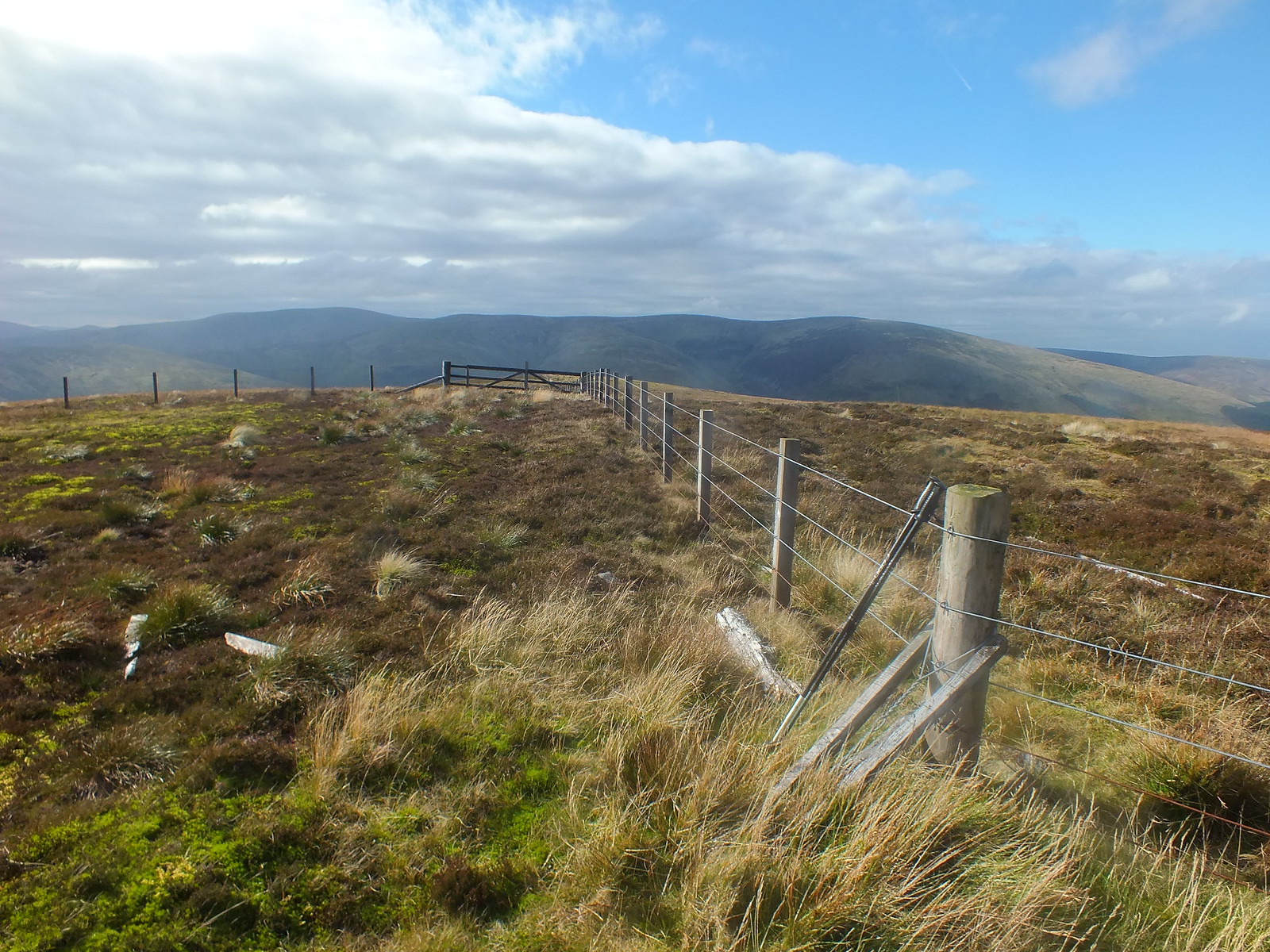 I noticed from previous reports that Black Law was a major disappointment and I totally agree and there was no reason to linger, so I was off on the final stretch the descent back to the car. The descent was really easy until the bracken is reached on the northern slopes on Sting Burn, luckily the bracken was on it's last legs and getting ready for the winter 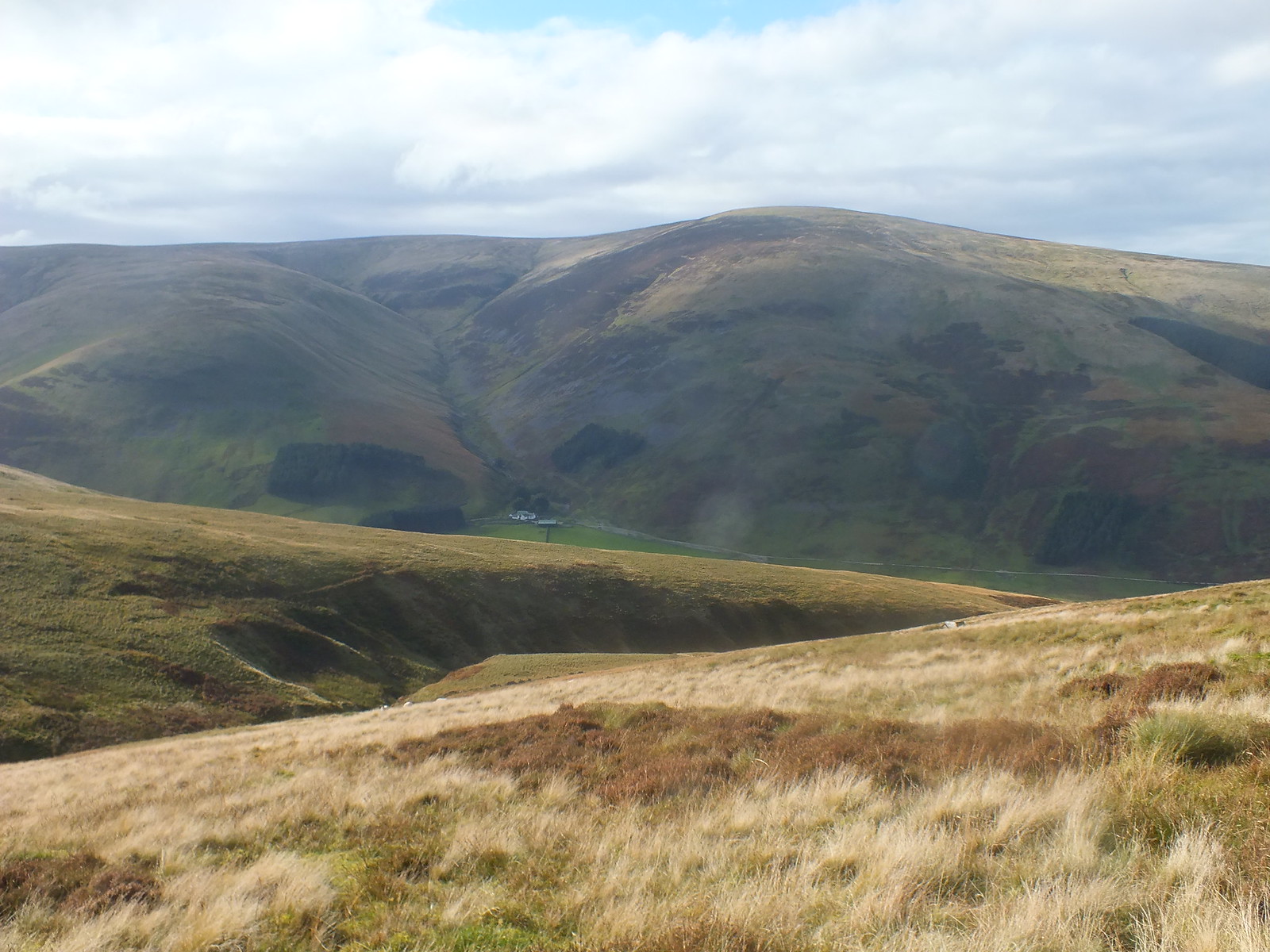 Manorhead Farm in the distance and the way down 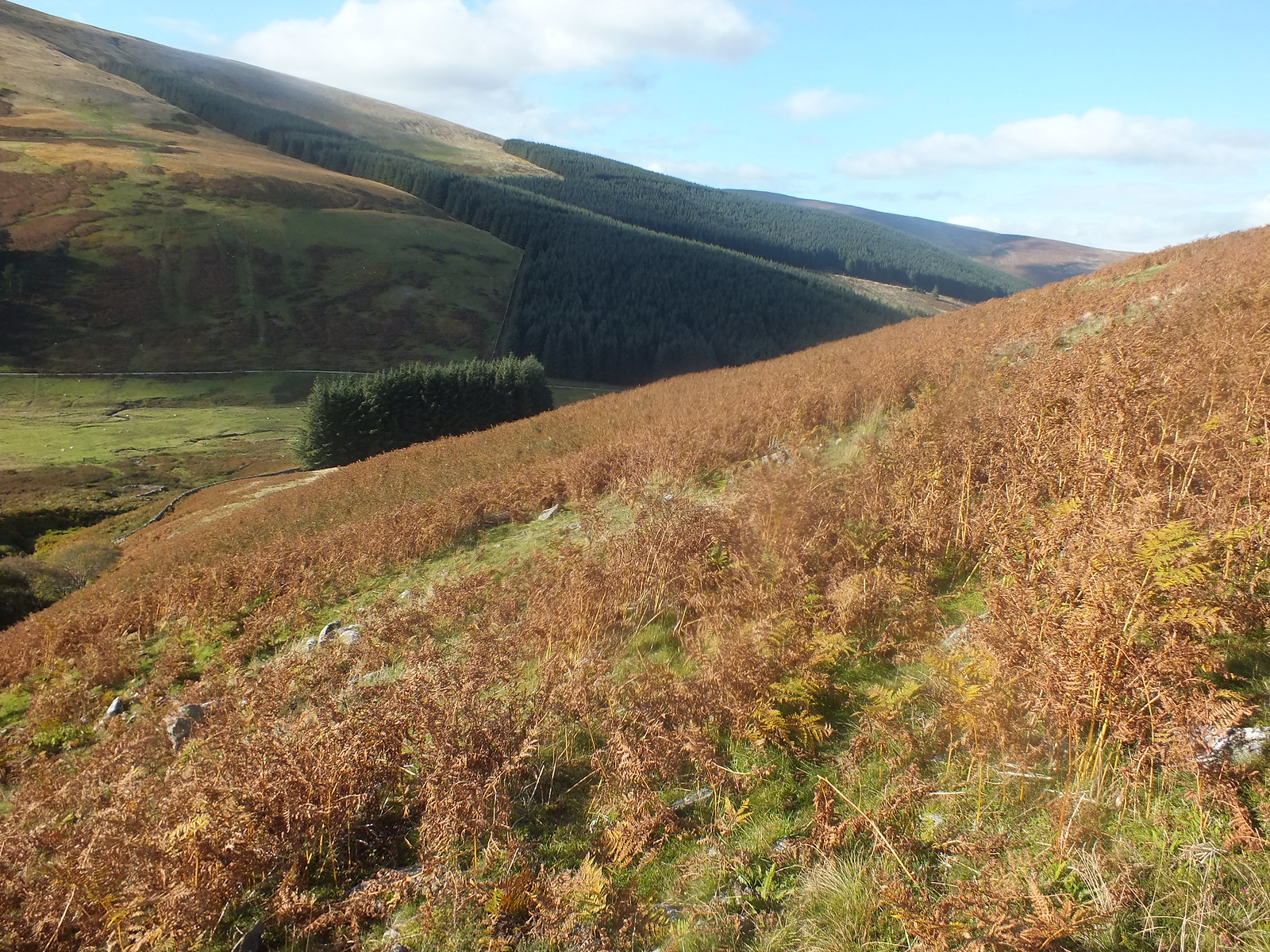 Lots of dying bracken to wade through 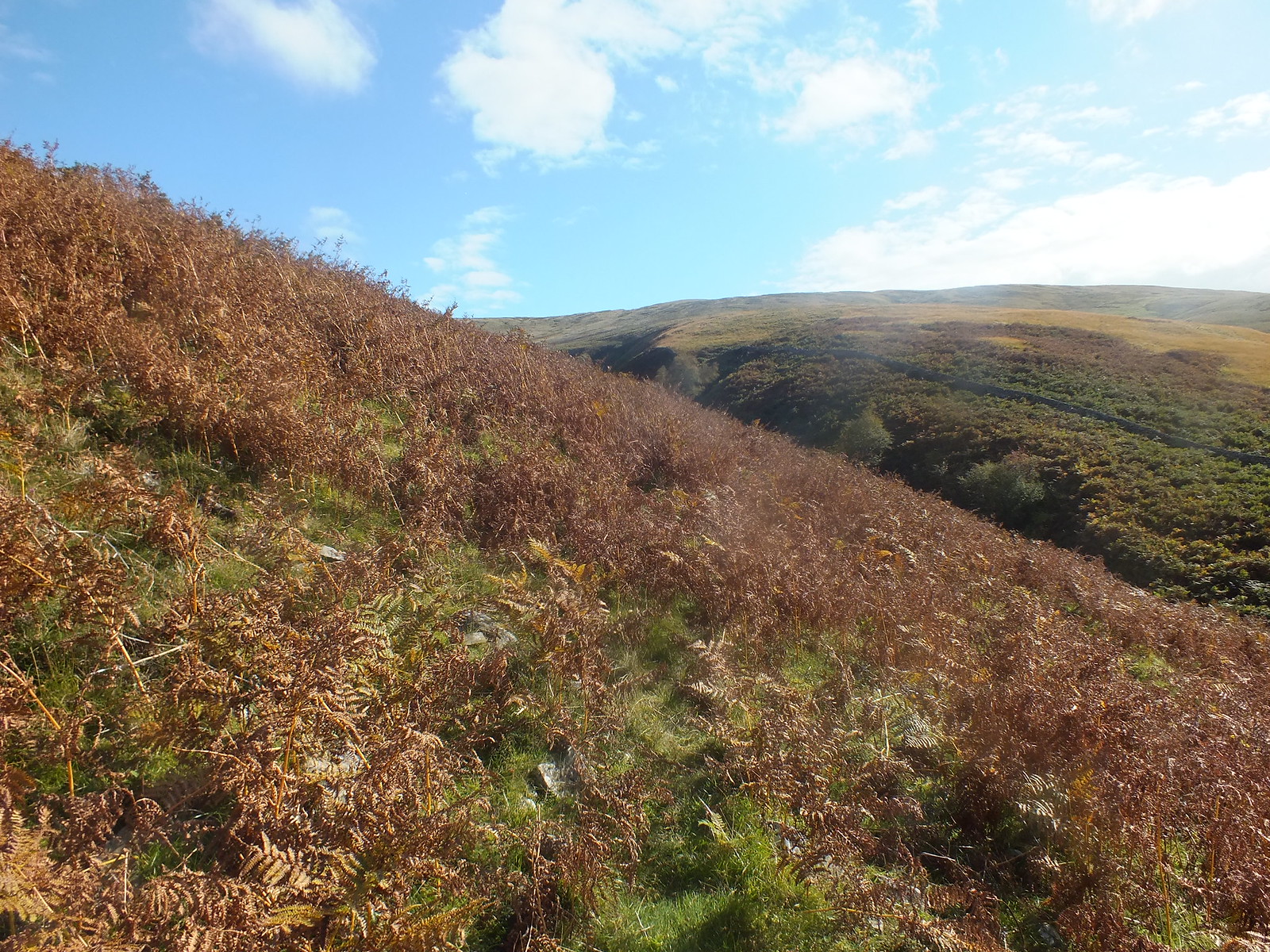 For the bracken lovers

That is 60 Donald's down, the majority that are left are now down in the deep south west

Next on the horizon is another visit to tackle the "Ring of Steal" with Tommy, this coming Thursday, forecast looks OK at the moment, bit blowy but dry

Agreed that this is a good area to walk. I did almost the same route in July, but clockwise. The weather looks to have held up better for you than it did for me, I got a proper soaking!

Looking back through my pictures I realised I hadn't finished the public report. Now fixed and you really didn't miss anything by not photographing the summit of Greenside Law!

Nice spot and photo of the caterpillar.

A nice area for walking, Martin. I enjoyed myself on that range in August.