We awoke to beautiful azure blue sky, everyone refreshed from a day off from the Cullin Ridge, which we had spent exploring the Duirinish Peninsula on four wheels and enjoying the gastronomic delights of the Red Roof Café at Glendale.

We arrived at our rendezvous with our guide, Paddy McGuire, in the layby adjacent to the Mountain Rescue Post at Sligahean. Neville, aka NevJB, our trusty Walkhighlands chronicler, advised Paddy that he would not be climbing today. After Paddy had distributed the kit for the day we started out along the path crossing the Alt Dearg Mor via a narrow wooden bridge after a short distance. The pathway was well defined and easy going, providing time to take in the scenery. After covering another 2 kms a runner appeared at another wooden plank bridge over the Alt Dearg Mor which marked the junction between the route to Sgurr nan Gilean via Coire Riabhach and the Bastier Gorge. The other worldly refrain of “…if I only could, I’d be running up that hill with no problem…” echoed in my head. I felt somehow humbled and overdressed, but once we had exchanged greetings my pride was restored when the runner assured us that he had only ventured as far as Coire Riabhach.

We continued our trek, and found ourselves after a short time climbing slabs up a rock band adjacent to the entrance to the Bastier Gorge, which were in places smooth and rounded by glacial action. Before us the large expanse of snow between Sgurr nan Gilean and Am Bastier, which had been clearly visible to us from Portree earlier in the week, provided an Alpine like quality to the panorama revealing itself to us.

The soaring ramparts of Pinnacle Ridge of Sgurr nan Gilean, with sunlight filtering through the silhouetted pinnacles like some theatre super trooper, and the entrance to the Bastier Gorge beneath us were awe inspiring in their scale. Before long we passed into the bowl of Coire Bastier, shrouded in the shadows cast by Pinnacle Ridge. As we reached the lochan at the back of the coire, the snow field rearing up before us, Paddy suggested that we take a short break and have a snack before we ventured onto the snow. The sheer scale of the surrounding grandeur was difficult to take in. 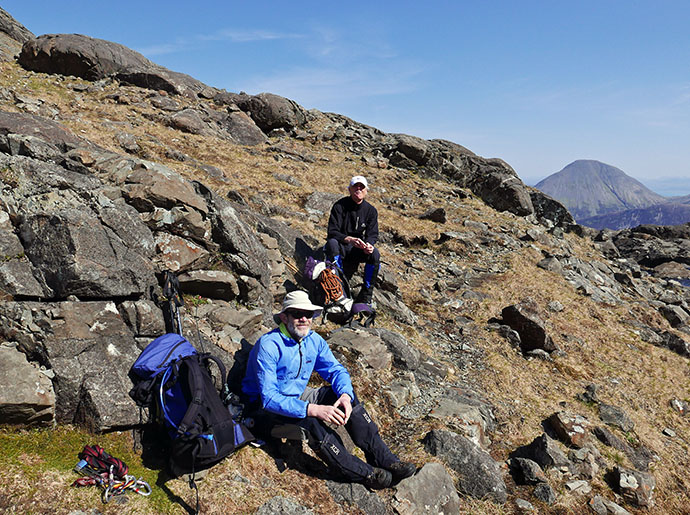 In no time gloves, harness and helmet donned, ice axe in hand, we started to traverse the snow field towards an outcrop at the foot of the cliffs of Am Basteir, the slope intimidating in the shadow light. The moment that we arrived at the outcrop, Paddy immediately started climbing the steep incline to the bealach between Sgurr nan Gilean and Am Bastier high above - each step he kicked into the snow, each measured placement of the ice axe, were rhythmical in their execution – we created our own soundtrack in the metronomic sound of crunching snow underfoot and melted snow cascading in rivulets into the coire below us.

The bright sunlight touching the lip of Bealach Bastier above beckoned us on. A momentary pause to look back revealed how exposed we were on the slope, the gradient more severe than we had appreciated, as so much attention was focused on Paddy breaking trail above. Neill became a study in stoic determination cursing the steepness of the slope. Time became immaterial until we emerged into the sunlight some 40 or so yards from the bealach, the sunlight reflecting off the snow dazling our eyes and warming our faces.

We paused momentarily when we arrived on the bealach to catch our breath and scan the magnificent blue sky above and before us, the Cullin Ridge arching to the South West. The bealach was a rock palate of faded orange, purple, green, grey and black. We turned our heads to study Sgurr nan Gilean, figures momentarily appearing on the summit, as Paddy described a potential route to the summit. We returned to focus our attention to consider the route to the summit of Am Bastier. We stowed our backpacks and ice axes and made our way towards the summit, Paddy carrying a short belay rope for the Bad Step beneath the summit. Paddy in customary style glided over the narrow ridge, which comprised scree paths and tilted basalt slabs. When necessary it was pleasurable to feel the warmth of the rock on our hands and feel the reassurance of its abrasive surface. When we finally arrived at the Bad Step we watched a Golden Eagle that appeared briefly, soaring serenely above the Cullin Ridge. Under Paddy’s trusty guidance we negotiated the Bad Step without incident, glimpsing the airy precipice to one side, and rapidly made the short distance to the top. The view back to the bealach and the full splendour of Sgurr Nan Gillean towering above were a sight to behold. This coupled with the fantastic weather that accompanied our day would be something to savour for a long time. We returned to the bealach via the same route, appreciating the Bad Step from another perspective, but any lingering nerves that we had from our first encounter somehow gone.

When we reached the bealach and recovered our backpacks we debated the possibility of climbing Sgurr Nan Gillean, but decided unanimously against the idea after taking into consideration the time it would take to make the ascent and then the descent to make the trek back to Sligahean (all the more reason to return to Skye in 2017). The prospect of making the descent via the snow field was initially daunting, but once we were committed to the slope and established a sense of balance and control any apprehension was quickly dispelled. It was noticeable that in the heat of the day the melting of the snow seemed to have accelerated since we had negotiated the slope only a few short hours before. Water was teeming off the exposed rocks lower down the slope. I was almost disappointed when we reached the foot of the slope, but I was not sure if that was a sentiment shared by Neill! The ascent and descent of the snow field, in fact the whole experience, evoked memories of the happy time I had spent in the Alps in 2000. Once we had packed our gloves, harnesses, helmets and ice axes we started our descent via the approach route, the fleet footed Paddy moving swiftly along the path. Somehow the familiarity of the route and the points of reference ahead of us seemed to speed our return to Sligahean.

When we reached the Sligahean we were met by a beaming NevJB and a cool cool beer. This was a memorable day made possible by the skill and patience of Paddy.

Cracking day and a great set of photos

). He took us round the Cuillin a couple of years ago - superb trip - cheers