A cracking day in Glen Shiel

A cracking day in Glen Shiel


The good weather continued but couldn’t get away for a camping trip so looked for options for the one day. Considered going along to Glenfinnan but in the end opted to go a little further north to Glen Shiel – hadn’t been there for a wee while.

Car parked in the layby at NH088121. Early start in the dark, cycled west to the Cluanie Lodge track then southwards along the track towards the 435m high point. 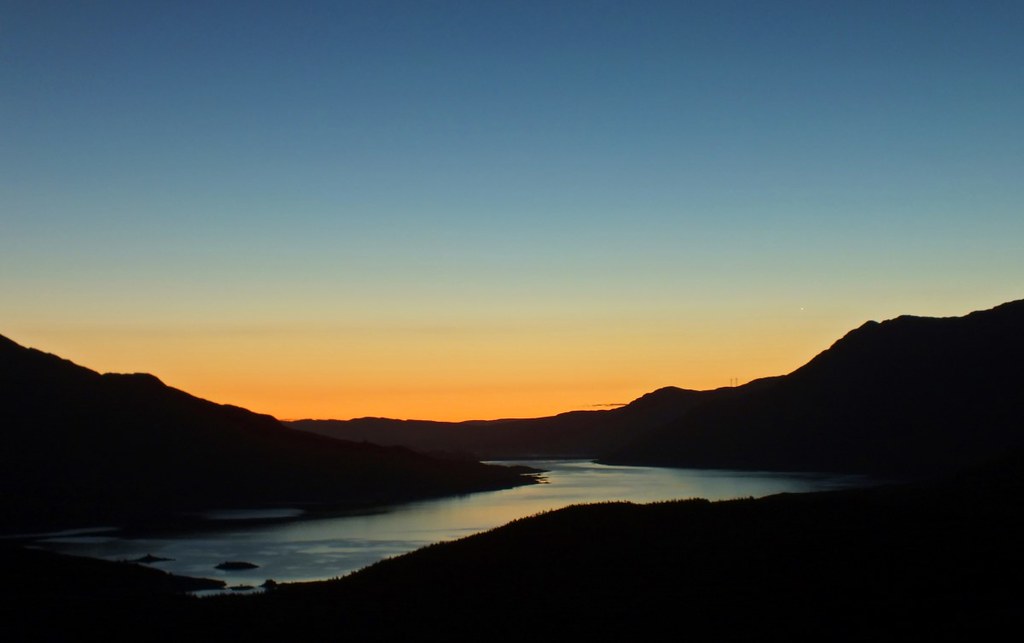 Started to get quite hard going as the track got higher – wasn’t sure if the bike was helping or hindering on the ascent but knew it would be better on the return leg. At the high point on the track, hid and locked the bike off to the side then set off towards the 540m point – some boggy ground to cross on the way.

Missed the sunrise due to not being high enough but there were some nice colours on the surrounding hills.

Rather fuzzy at extreme zoom and cropped

Continued up and over Druim nan Cnamh to the summit

Sail Chaorainn in the distance

Spent quite a long time at the top looking at the views, pondering and thinking – eventually had to set off on the return leg – more or less the same way back down. Picked up the bike then off down the track. Met a large group of walkers at one of the bridges then another solo walker further down.

Got back to the car, deposited the bike and got ready to set off on foot. Other than my car, there was only a campervan in the layby when I’d set off earlier – the layby was now very busy. A short way down the road a car drew up and the lady driver asked about the best place to park for the two close by munros so pointed her to the layby.

Spotted two walkers on A’ Chràileag

Down to Loch Cluanie

Continued on the track until the summit

Took some photos, had a look around then set off back down to the car

Didn’t meet anyone on Am Bathach. Back at the car, had some lunch then drove east along the A87 then on to the A887 and parked in the off road layby at NH254116.

Got ready then crossed the road, through the gate and south up the windfarm track.

Cycled part of the way – although it’s a good track, there’s a fair bit of surface rubble which makes for hard going. Had to push part of the way before stopping and locking up the bike. Then on foot the rest of the way.

The sky was still relatively cloud free on leaving the car but more and more cloud was starting to appear.

Got to a point where the track started to dip downwards. Left it at this point and continued over pathless ground – rough and boggy at times – in a southwards direction towards the summit.

Up to the 745m point then round SW to the summit

Clearer towards the east

Over to Glen Shiel

Took some more photos then set off back down the ascent route.

Back to the car just after 1700hrs. Got changed then drove back to Glasgow.

Your title says it all, got exhausted just reading this

Great photos and nice to see the neighbour hills which I did the same day, from your side

I somehow missed this when it was published. Some great pics there, and what was obviously a brilliant day.

I've got aspirations in this area for next year....

It's just such a long drive

Really lovely photos - looks like it was a beauty of a day! The shot of the stag was surprisingly good quality for the distance it must have been at!

Can I ask, what sort of camera are you using (is it a compact or SLR) and how do you get your photos on the report so that they enlarge when clicked on? Thanks!

timmunro86 wrote:Can I ask, what sort of camera are you using (is it a compact or SLR) and how do you get your photos on the report so that they enlarge when clicked on? Thanks!

Hi - I normally just use a wee digital compact but sometimes, if the weather/conditions look better as on this trip, I use a Fujifilm FinePix HS30EXR - it's still just a digital bridge camera but does have a 30x optical zoom which I think is the equivalent of 720mm (compared to my old manual SLR 80-200mm zoom with 2x converter which gave a maximum of 400mm). That said, it's still fairly basic compared to a lot of the high end cameras which some people on the site use. Re enlarging on clicking - like a lot of others, I reduce the size of my photos using a free software tool to around 100 - 200kb each then upload to flickr - then write the report in a word doc and copy/paste the link for each photo into the report at the right point - save as I go then copy/paste the whole lot into the new report box on the WH site - then when you click on the photo, it enlarges - you also have the option on flickr to select the size of image and the larger you select the larger it will be when you click on it (although I think but am not sure that the larger the sizes of photos, the longer the report may take to load) - if you click to quote a report you'll see the links in peoples' reports where some use flickr, photobucket, google etc and some upload directly to WH - cheers