Ben Alligin: a Homage to the Horns

Ben Alligin: a Homage to the Horns


There are days that simply surpass all expectations. The experience embeds itself in your memory and the surroundings challenge the ability of cameras to capture their scale and majesty. Some images are best saved and savoured in the mind rather than any futile attempt to fix them in two-dimensions or the innards of electronic gadgetry. Sometimes even words struggle to convey days like this.

But here goes; I'll try. And, despite those disparaging words about photography, I'll add the odd image, but try not to over-populate the report with a repetitive slideshow.

It was my third trip to Torridon this year and I'm fast becoming addicted to the place: the sheer scale, the way the hills bulge and protrude from the surrounding landscape, and the moody drama of it all as weather and light constantly change. My very first visit to the glen was an aborted trip in lashing summer rain about forty years ago. However, subsequent visits have erased any negativity that lingered from that earlier soggy experience.

After successfully traversing the other two big local ridges this summer, Ben Alligin remained. With a flurry of reports on the site in recent months, I thought I must have been the only person on WH not to have paid homage to The Horns. This apparent omission needed to be rectified.

The day starts and the early morning sun wakens the fringe of Loch Torridon ... ... but still leaves it all in shadow for quite a long time

A late arrival after going up Ben Wyvis the day before, and a night spent in the car, meant I could take advantage of an early start and linger over what promised to be a memorable day from sea to summit and back.

The day didn't take long to become strenuous. Across the road from the car park, a path, hidden by a wheelie bin on the day I was there, snaked through some bushes before revealing the slopes above. One drawback about some of the climbs hereabouts is that the path is almost vertical as soon as you step out of the car. Then, with a slope close to your nose, the view is somewhat limited: close-quarters grass and the rocks on which your next two footsteps have to be placed.

On the other hand, the climb up to Tom na Gruagaich was fortunate to have more expansive views. The Horns were visible and tempting over to the north east; behind, the shores of Loch Torridon were emerging into daylight, and the serrated skyline of the Cuillin ridge came into view across the water. Above, Coire nan Laogh awaited. For a while I'd been curious about the path up into the corrie, and how it would emerge onto the summit ridge. Sweeping into Coir nan Laogh and up to Tom na Gruagaich

The Cuillin Ridge serrates the skyline

I need not have worried. The sweeping green ramp that curved up into the corrie just kept on going, and going, and going: no rugged head wall to climb and no slithering sheets of scree to be negotiated. Yet again an apparently impregnable Torridonian wall became more benign on closer acquaintance: inspection and exertion well-rewarded.

Confronted with a massive cairn on the bealach, along with the coastal panorama to the north, I realised that I was already within spitting distance of the top - provided the wind was in the right direction. A short wander across to the summit cairn and there was the breathtaking surprise: the ground didn't just fall away, it simply disappeared. All I was faced with was the opposite wall of the corrie, Sgurr Mor and the famed Horns. Most reassuringly, the bulk of the day's physical demands had also been met within just a couple of hours. The traverse ahead could be relished and savoured without the added worry of pending breathless exhaustion or increasingly leaden limbs.

It's in locations like this that you want to simply stop and stare. Cliches abound as distant ridges dissolve into one another, summits get ticked off and you try to pick the line across the Horns. This is not a place to hurry: linger at your pleasure and be grateful to whoever you deem responsible for these surroundings. 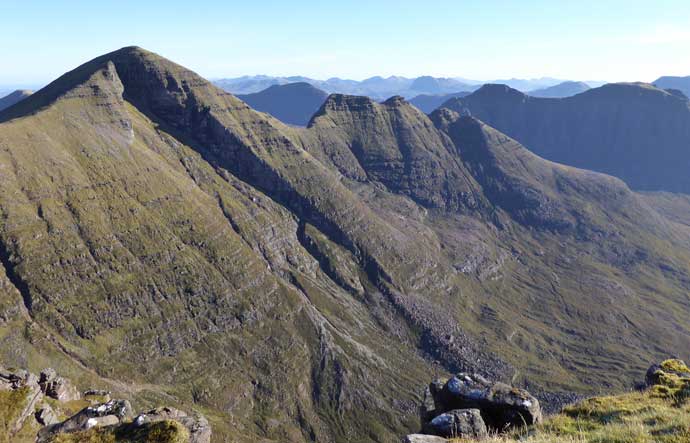 Sgurr Mhor and The Horns from Tom na Gruagaich

But, there was a second Munro to be crossed. Sgurr Mor lay between me and the fun to be had making the final traverse over the trio of pinnacles. The infamous Black Cleft was passed shortly before the summit, not living up to its dark name with the sun shining straight into its enclosing walls. The obligatory photograph of Eag Dubh

Once on the second Munro, the prospects ahead could be pondered in more detail: what came next was what it was all about, it was why I came. Like it's neighbours to the east, the prospect of an airy scramble was the icing on the cake.

Access to the first Horn was obvious. From the bealach the path snaked upwards like a loosely draped rope on the steep grass of the southern flank. Let confidence push any nervousness aside. The cairn on the pinnacle appears with surprising ease. Go on, do it yourself and see.

The first Horn - with Loch a Bhealaich and Sgorr Dubh

In contrast, the second Horn appears to present more of a challenge. When addressed face-on from its predecessor, the upper part of the buttress appears vertical. But again, getting up close and personal reveals nothing more than a benign clamber up a series of easily surmountable blocks that lead to the top and the next cairn. Looking back from the second Horn

By now any anxiety about lurking difficulties have disappeared; you just want it to go on and on. The third and final Horn can be romped up, with the cairn suddenly appearing at eye-level as scramble ends. I'd lingered on each and spent almost an hour and half getting from one end to the other: time well spent; satisfying; exhilarating; invigorating.

Exhilaration ends on the third Horn The shimmering silver of Loch Torridon

Like all the other tops above Torridon, Ben Alligin wants you to stay. It provides so many perches and niches in which to nestle and spend a while just looking. You trace the lines of previous haunts, you plot new ways to visit what have quickly become old friends, you get greedy over all the peaks and points you've yet to explore.

Time finally pressed, and I began my descent off the end of the ridge and down to the south east from An t Sail Bheg. Just as you start to become lazy and relaxed, thinking this is easy, you are brought up short. Again, the ground disappears. Scrambling down adds interest to what could have been a knee-jarring interlude. Instead, height is lost quickly yet safely. At what looks from a distance like an obelisk, the easy path into Coire Mhic Nobull begins and the final walk back to the car park is a pleasure. Ben Alligin and its Horns sit proudly at the mouth of the glen. They may be a tad smaller than the big bulky neighbours to the east, but they are an integral part of an iconic trio. I know, I've been lucky to experience them all in gentle and obliging conditions, allowed time to savour them and relish the experience. But every now and again, with the odd glance down and the thought of the consequence of a simple stumble, the potentially fearsomeTriad remind you who is boss. A final view of Ben Alligin and its Horns And having said at the beginning that they could defy words, it shows how inspirational they can be. Apologies for droning on if you've got this far.

Ignore me, just get up there and climb them.

That's great! We were on Beinn a' Chearcaill that day, and did Alligin (the other way round) later in the week.
If you really pushed me to choose, then Alligin would be my desert island hillwalk: a perfect round, not too long,
with sustained interest and stunning scenery from start to finish.

The Torridons are just fantastic aren't they? Well worth saving Alligin for a fine day as you had.

Interesting what you say about photos and words not doing justice to the reality. Very true of course, since actually they (especially words) are nothing like the reality. But, as yours clearly show, they provide a tantalising intimation of the reality (or rather the real experience) which, as you say, can (and does) inspire.

Your report comes as close as anyone could to doing Ben Alligin justice.

A good read and stunning photos bringing back to the surface all the sensations of being up earlier in the summer, one of the best mountain days we have had

Alligin on a good day is as close to perfection as it could be. I've been up it twice, both times in October. Seems Torridon looks best in autumn colours.

You should try Beinn Dearg now (if you haven't done it yet). Might be just a Corbett but it is just as good as Torridon Munros, if not better

Glad you got a great day for it, Nige. Its stunning. I was even mesmerised by the walk out. Torridon + good weather = Sublime/a MUST.

Oooh lucky you being in Torridon during this awesome weather

Great read - brightened up my journey to work - thank you!

Users browsing this forum: Owen b, PaulAgnew and 42 guests