Not as good a weekend as the two previous ones, wet Saturday, windy Sunday. Or at least that was the forecast. Sunday turned out to be better than predicted in the end so we headed for the seaside. It would have been possible to climb a half-day Graham, but we wanted something different. The circuit of Rubha Mor deserves to be done on a good day, when the sea is quiet and one can see all the way to the Outer Hebrides.
The weather man warned us that a wet front was coming over Scotland in the afternoon, so we were happy to stay at low level, just to avoid getting soaked on some slippery slopes. No regrets here - I always wanted to walk the full circuit of this lovely, remote peninsula. There might be better cliffs further north (and south indeed) but Rubha Mor has its own charms and delights, best appreciated on a sunny day.

The full circular walk does not feature on WH yet, just the shorter walk to Slaggan beach, but it is really worth walking the whole stretch of the coast here. We have been to Slaggan Beach before, now it was time for more advanced explorations

It was a gorgeous morning and as we drove to the western coast, we admired the views to Assynt weirdos...

Our route mostly follows the description from "100 classic coastal walks in Scotland" by Andrew Dempster. The book suggests starting from the car park by the beach in Mellon Udrigle, but we preferred to park in a small parking area just past Achgarve, next to the start of the track heading for Slaggan. After the 5km marching to the beach, we mostly followed the coastline:

Track_SLAGGAN BAY 16-10-16.gpx Open full screen  NB: Walkhighlands is not responsible for the accuracy of gpx files in users posts
Even the first stage of this circuit, which one may consider boring when studying the map, is not without some interest. This lovely wee lochan (called Loch na h-Innse Gairbhe) is passed en route:

The track makes for fast going and soon we could see the coastline with the ruins of the croft in Slaggan:

An Teallach on the horizon and Loch an t-Slagain: ...but they were tame enough to let us pass by without any incident... Apart form a few annoying stable flies, trying to get us The tide was out. This beach is simply a stunning place and usually we explore it for a longer time, but today we had a longer walk in mind, so just took photos from the cliff above:

From Dempster's book:
"Although unmarked on the map, a reasonable path exists for much of the way, hinting at the route's popularity." As we had some fun with our cameras, we heard a noisy sound - a ship siren! Soon we spotted a few naval vessels nearby, they were having fun as well

Most likely some kind of maneuvers. A few snaps for the fans of navy ships (pics enhanced in Picasa):

After watching the spectacle for some time, we followed the path along the shore. The cliffs are not very high here, but the views across Loch Ewe are hard to beat:

"From Slaggan Bay, a fairly distinct path follows the edge of the steep slope on beautiful springy turf and crowberry, making for delightful walking."
From the first "tip" on the coastline, we could see a fair distance north along the shore. An excellent viewpoint, this point is called Gob a'Gheodha. 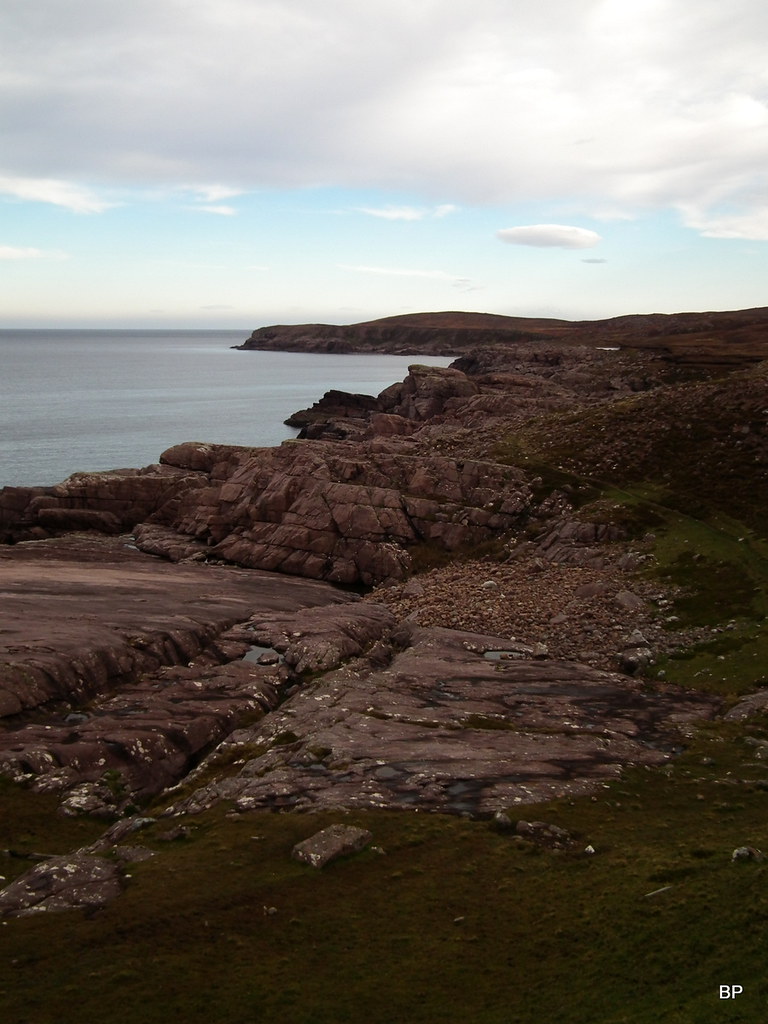 The path follows the coast with more views around every corner, past a wee lochan:

The rocks on the shore are mostly red sandstone: The next stop - Gob a'Chuaille, another "tip" with good views north, more sandstone formations, some of weird shapes: 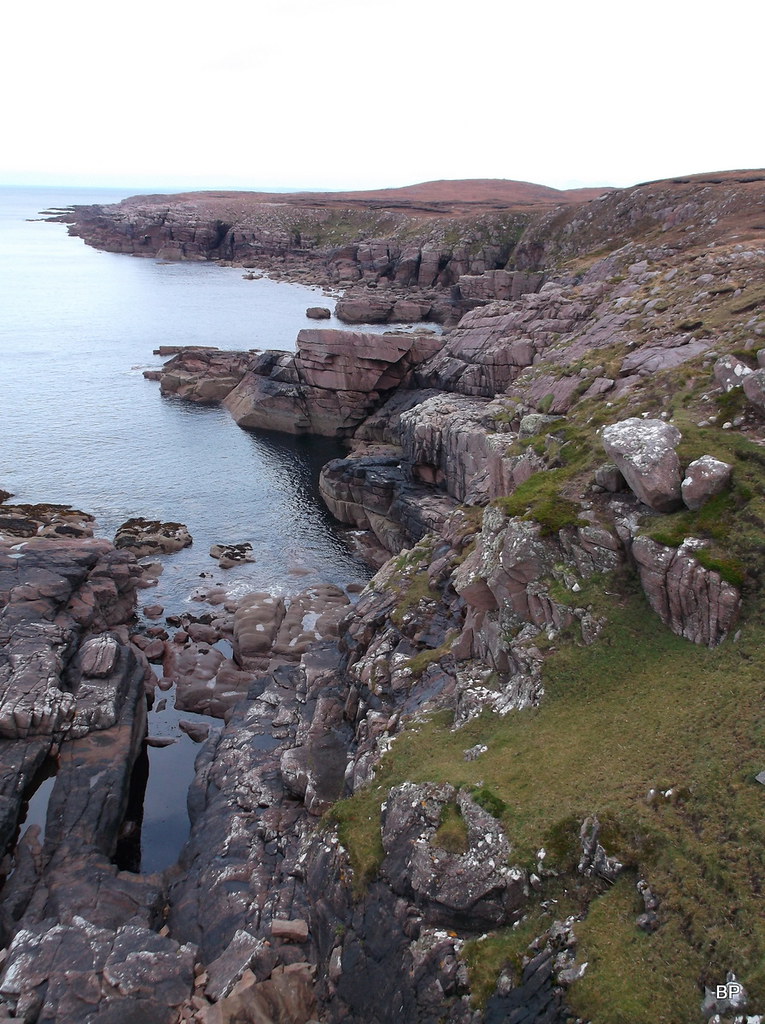 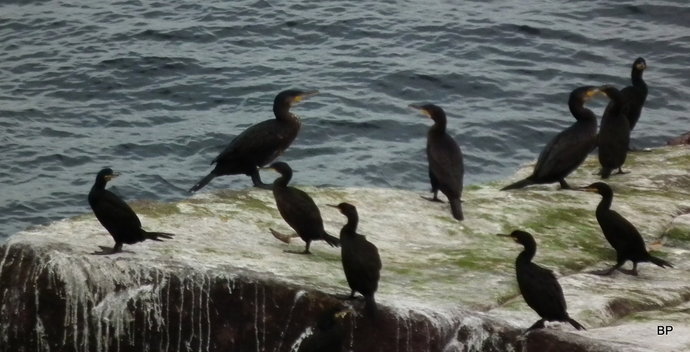 ...whereas I was busy exploring the very tip of the tip The book gives 6-8 hours to do this walk, which we regarded as far too much, but I soon understood why the overestimation - basically every 5 minutes we stopped to take photos as the seascape (coastscape?) changed constantly, different perspective from every rocky outcrop: 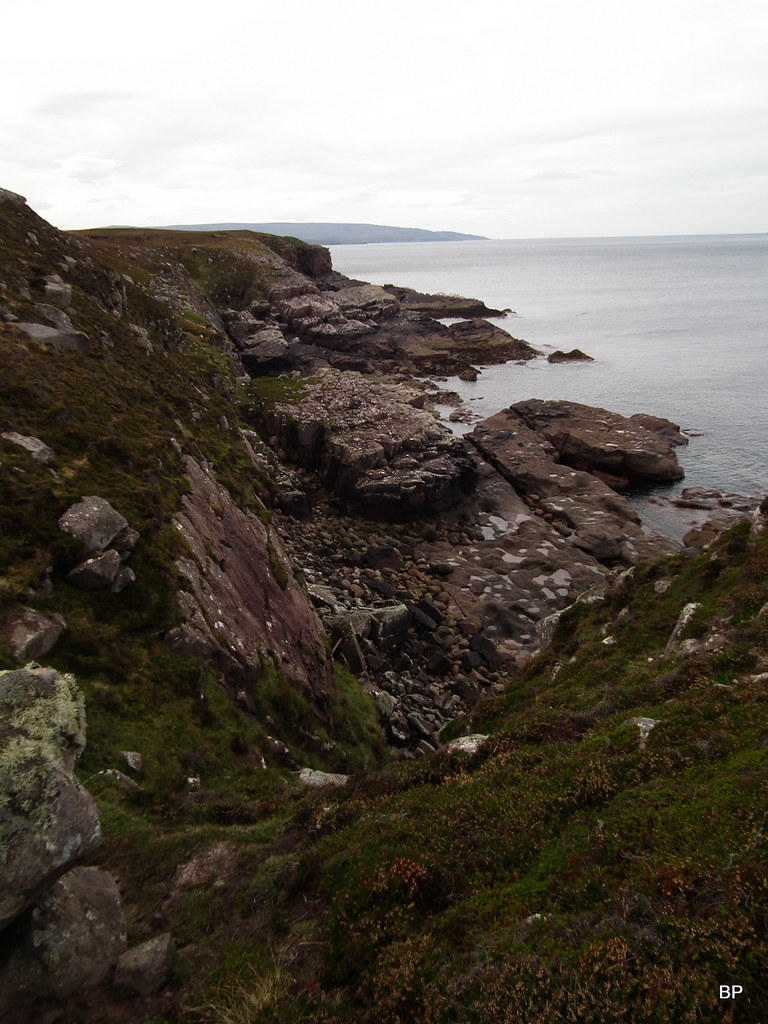 The path was still pretty obvious and though boggy here and there, it was surprisingly well worn - obviously this circuit is quite popular with walkers!
Soon we spotted the NW tip of the peninsula - Greenstone point. Not sure if the name is correct, as all the rock around this area is definitely RED!

Maybe the green refers to the grass growing between the rocks. We asked the local inhabitants, but they were not very keen to answer... One said baaaaa...

Around Greenstone point one can feel like in rocky heaven

so many rocks of different shapes and sizes, like giant Lego blocks, some lying at strange angles and weird shapes. This one reminds me of a sleeping rhino: The very top of the Greenstone Point is a large crag, in the shape of overturned pot...
"Make an optional ascent of this crag by way of an easy scramble on the south side. On the top are a cemented cairn and a pole, and it is a fine vantage point for the curious rock architecture all around."
Kevin followed the instructions: ...while I lingered behind, snapping photos and admiring the odd shapes of this remote sandstone world.

Panoramic view south from the top of the crag:

It's not a listed hill by any chance, but Kevin was happy to pose on top:

From now on, we had even better views to the north, including the familiar shape of Ben More Coigach and the rocky outline of Priest Island and all the Summer Isles (no wickerman on the horizon though):

We took a longer break here, stretching our legs and enjoying poppyseed strudel, but Kevin noticed that the southern horizon was clouding up and the wind became stronger, meaning that the forecast wet front was coming in. The sky was a bit darker now and photos came out more atmospheric, even a bit gloomy: We set off to continue the circuit, following the path east along the shore now. We passed a few deep inlets, looking like some giant used an axe here: 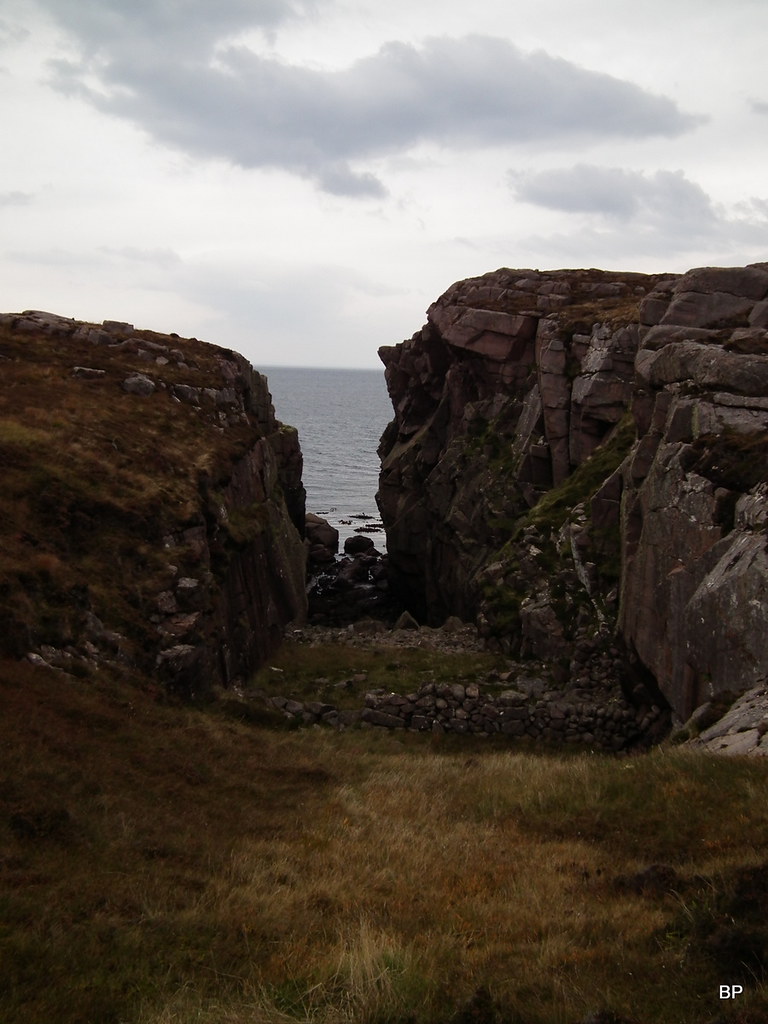 2016-10-16 slaggan bay coast 258 by Ewa Dalziel, on Flickr
From the next vantage point, the NE panorama looked even more breathtaking:

The path became more indistinct now and the ground a bit more squelchy, but the navigation is never difficult here - just follow the coast! We cut across one of the outlets just to save time, and soon arrived by the next bay, Camas an Lochain:

Here we picked the path once more - it was well worn again, indicating that we were closer to civilization. Indeed we saw a family walking a dog and soon we noticed the first buildings of Opinan. But there was still plenty of wild landscape to admire:

It is possible to follow the coast even further, all the way to the lovely beach of Camas a'Charraig, but we saw the weather front coming and decided to return along the Opinan tarmac road. Leaving the coastline was somehow difficult, I couldn't stop gazing in the distance...

From the first houses in Opinan a "sort of tarmac" road can be followed to Mellon Udridge and further back to the starting point:

Just before reaching the car, we had the last opportunity to admire the views towards the peaks of Torridon: We took just short of 6 hours but as a lazy pace with countless stops for photos, there was no need to hurry and lots to see. The rain caught us eventually, as we were driving back home, some time around half past three - we could have done an easier hill, but I have no regrets whatsoever. The Rubha Mor route well deserves to be called "one of the most satisfying circular coastal walks in western Scotland".

Really enjoyed this BP, I love sea walks which makes me wonder why I don't do them more often