Today was to be a big day in that Mrs MG and Tango the dog were to crack their first Scottish Munro. North Wales mountains had been done time and again as Team Munrogimps, but this was a significant first north of the border.
The Met Office sold us the day as: But the view from the cottage was: It'll clear up. We hoped.
After an athletes breakfast of bacon, blackpud and eggs we departed Braes of Foss car park in fine spirits, Tango leading the way of course. As documented previously by many others the path up is very well constructed and loops around the contours towards the boulder-field.
It'll clear up.
Occasional glimpses through clag afford us views across the glen to the opposite side where we walked yesterday: http://www.walkhighlands.co.uk/Forum/viewtopic.php?f=9&t=67522 It'll clear up.
Sporadic showers and cold northerly winds were enough to force on the waterproof slacks, even for Tango. The very slippery rocks were stumbled across and now there was very little visibility.
But it'll clear up. Mrs MG having a word with Tango I've no idea what was said but Mrs MG thinks its funny, Tango doesn't.

After the 4th, 5th or was it 6th false summit we topped out on to....some rocks. No cairn, no trig point, no bunting.
And it didn't bloody well clear up.
Bless her Helen was still grinning like a Cheshire Cat at last joining the bagger's club. Me? I was just glad to be be one Munro ahead of my usual bagging partner Snowdonia7!!! Suck it up Dave

We dropped down 50 mtrs or so to shelter from the wind and so to enjoy a brew, a butty and the mist before removing the waterproofs, including Tango's Elvis-like collared jacket. 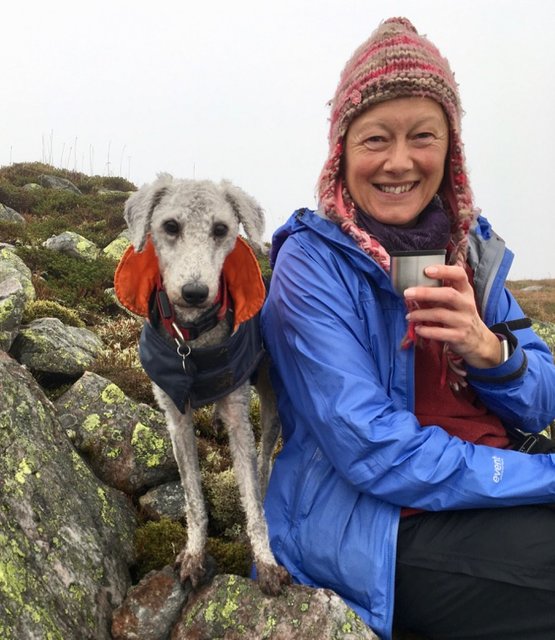 Mrs MG had done good but was clearly a tad tired as she repeatedly caught rocks with her boots on the decent, but the de-brief, over a large coffee and a sticky-toffee pudding & ice cream in Kinloch Rannoch, was all positive.
What wasn't positive was our language when we looked back at Schiehallion on returning to the cottage: That's Scottish weather for you

clag on top, clears up at the bottom. Last time I was on this hill a couple of years ago my better half also came along - nice weather at the bottom then heavy rain from near the top until we go back down - I wasn't too popular

I hear you both!

Camping by Loch Tummel three years back, up at the crack of dawn to take two mates up there, clear up to the cairn then a clag-bound summit ridge, making for some treacherous rock-hopping. Mate 1 slipped and gashed his shin on way to the summit and Mate 2 slipped and hurt his back / shoulder on the return.

Back at the tents for 9am and by late morning, blue skies and clear summit!

To add insult to injuries, there was a report on WH later that day of a sunny 50th Munro celebration atop Schiehallion that afternoon.

The early bird does not always catch the worm!!