The last two days of August saw us following the sunshine again, this time to the Scottish Borders. After a morning looking around a sunny Abbotsford, Sir Walter Scott's residence, the sun abruptly disappeared as we set off towards the Eildon Hills. This wasn't supposed to happen...


eildon-hills.gpx Open full screen  NB: Walkhighlands is not responsible for the accuracy of gpx files in users posts

A long set of steps got us out of town and onto the open hill quickly: 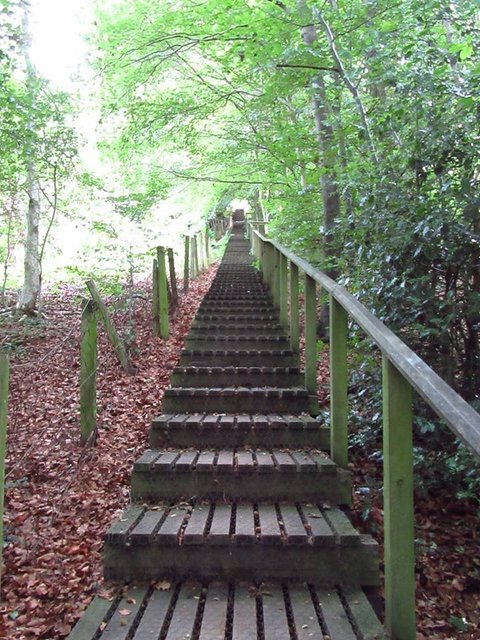 A fox and a few rabbits scampered away as we passed alongside a sloping field. 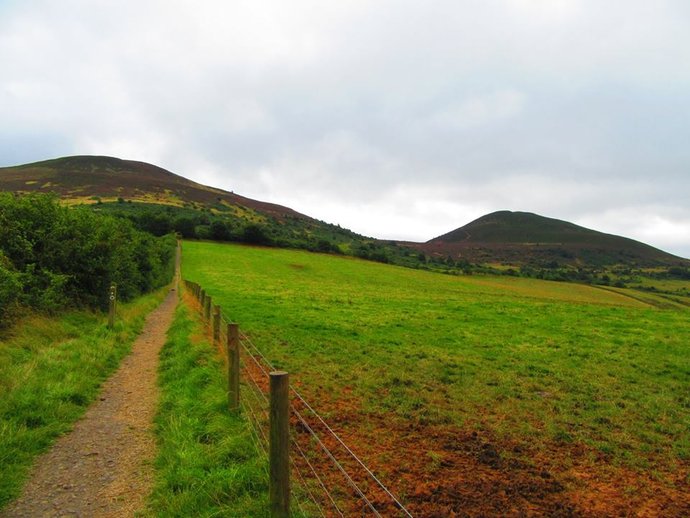 Beyond the farmland the path splits into several different ones - both of the two on the right take you to the bealach between the north and middle hills. Good views ahead to Mid Hill, but where was the sunshine? Ah - there it is! Somewhere between Melrose and Galashiels: 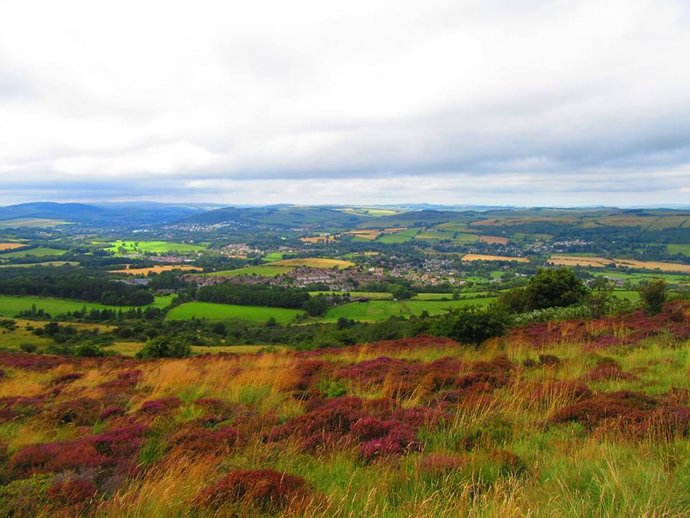 Colourful heather lined the path to Eildon Hill North from the bealach: 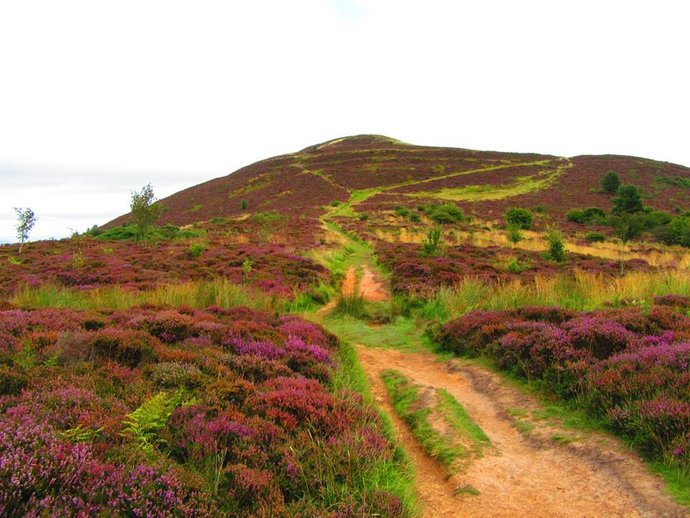 Mid Hill was our first target however - the highest of the three with steep, gravelly path to the summit. The view from the trig point was excellent, only slightly spoilt by overcast skies and a buffeting wind. Over to North Hill: And down to Wester Hill (confusingly, directly to the south): View of the trig point: 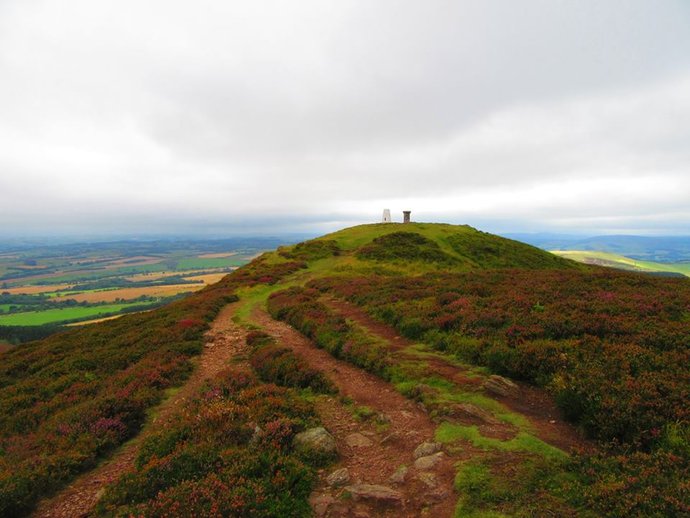 A slippery descent on a scree path provided a direct route to Wester Hill, instead of returning to the bealach first as on the walkhighlands route. At the end of the steep ground we soon joined a wider path, gently rising through heather. 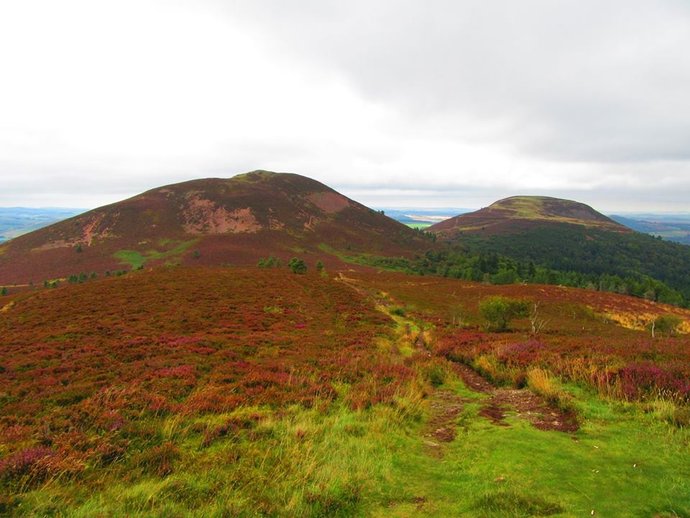 More decent views from this southern end of the ridge, but rain was threatening so we retreated back north, around the side of Mid Hill on the way to Eildon Hill North. View back to the first two hills from the ascent: 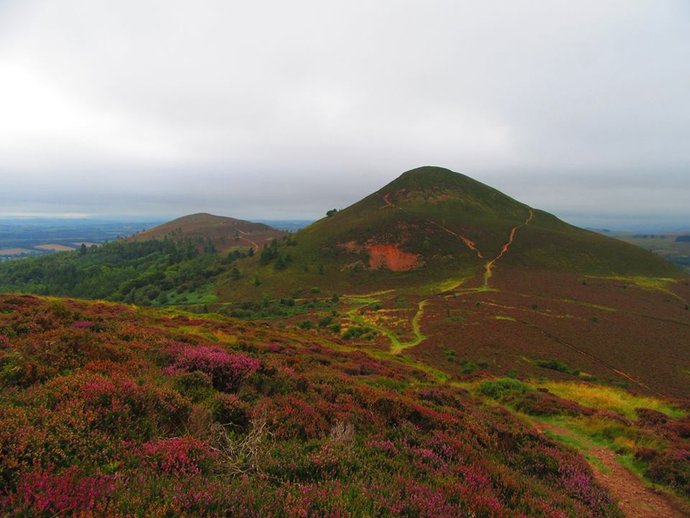 To the north: Black Hill and Leaderfoot Viaduct: The odd spot of rain was still threatening to turn into something more serious, and the wind had ratcheted up another notch so we didn't spend long at the top. Once on the descent path to the east we were suddenly sheltered from the wind and the rain didn't come to anything in the end. It was a scenic descent although the path got a little muddy further down, before coming out on the old road between Melrose and Eildon village. We made a short detour to the right to visit Rhymer's Stone - dedicated to reputed 13th century prophet Thomas Rhymer. Amongst other predictions, Rhymer claimed that one day a bridge would be visible across the Tweed from a tree next to where the Rhymer's Stone now stands. Lo and behold, Leaderfoot Viaduct opened hundreds of years after his death, and is just visible from the stone... The return to Melrose from here was unspectacular but pleasant enough, first following a track north towards Newstead, before a path led along field edges back to the start. 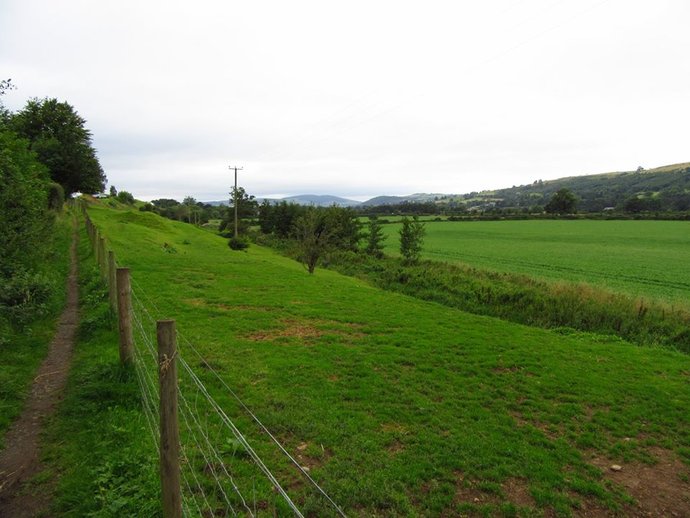 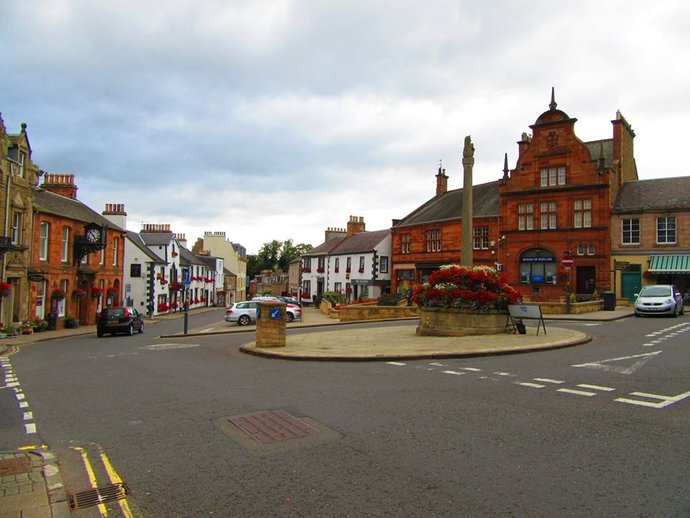 A nice leg-stretcher to work up the appetite for a steak that evening!

Re: Staircase to the Eildons

Have driven by and admired these wee hills a couple of times. Next time I must really stop and take a hike!

Re: Staircase to the Eildons

Have driven by and admired these wee hills a couple of times. Next time I must really stop and take a hike!

Thanks Graeme - sorry, only just seen your comment. We first saw them from the 3 Brethren and yes, they're distinctive wee peaks.