An afternoon rendezvous in Aberfoyle led me to look at walk possibilities in this part of Scotland, and after having decided that the Graham north of Ben Lomond would be too long a walk for the time I had available, I chose Beinn Uird and Binnean nan Gobhar. Gavin99's route seemed like a very good circuit, so I parked up at the Cashel Woodland car park (£2 fee, in the honesty box there), and took the track that zig-zagged up through the young woodland, quickly gaining height. There were some lovely views back to the loch and beyond. 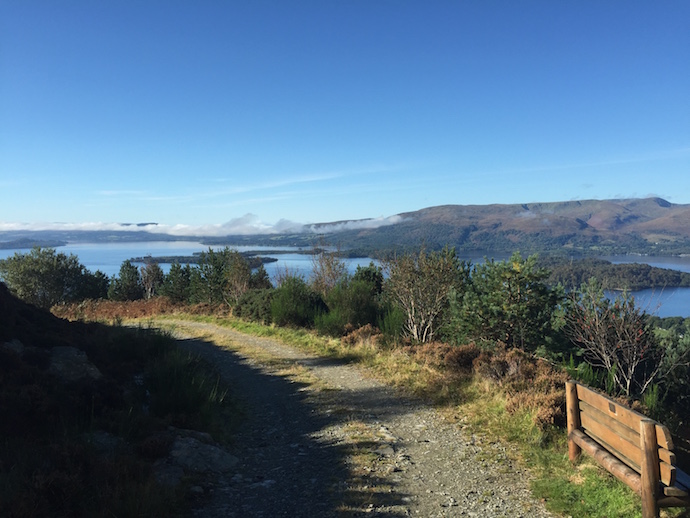 The track from Cashel, looking back over the islands 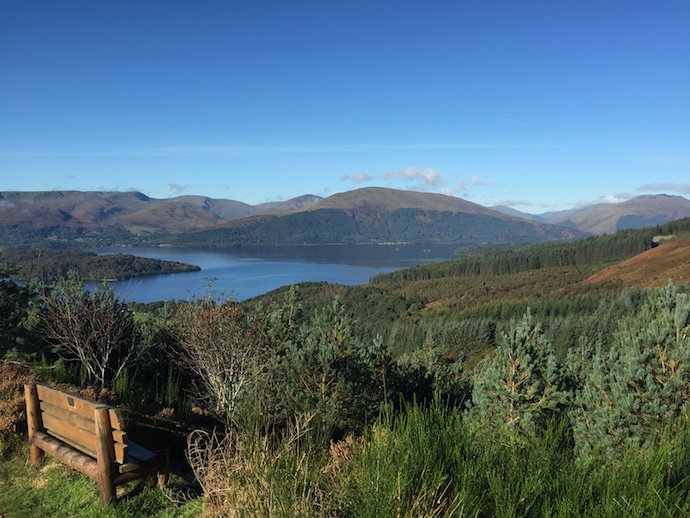 Across to the Luss Hills

Eventually the track heads into more commercial plantation, and after having initially missed the side track to the right, I found that track, which led up to the forest edge and through a gap in the fence onto the open hillside. 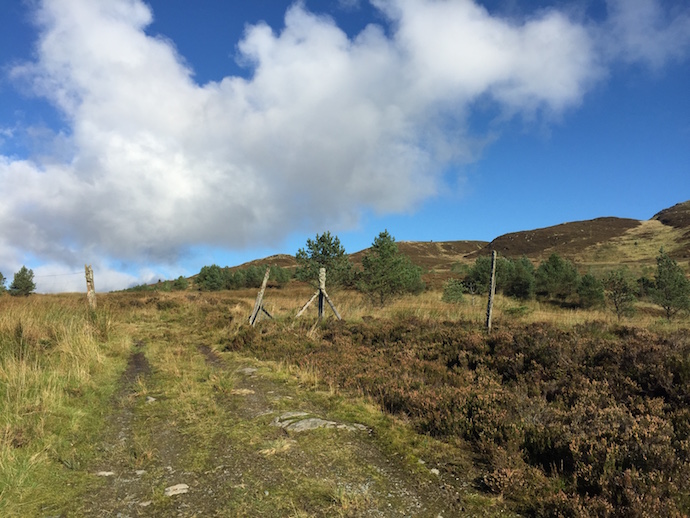 The track leading out of the forest onto Binnein's slopes

This track continued over incredibly boggy ground—which, while not very steep, makes for slow going. Heather or bog? You choose

The track (or linear bog) leads up a shallow valley. 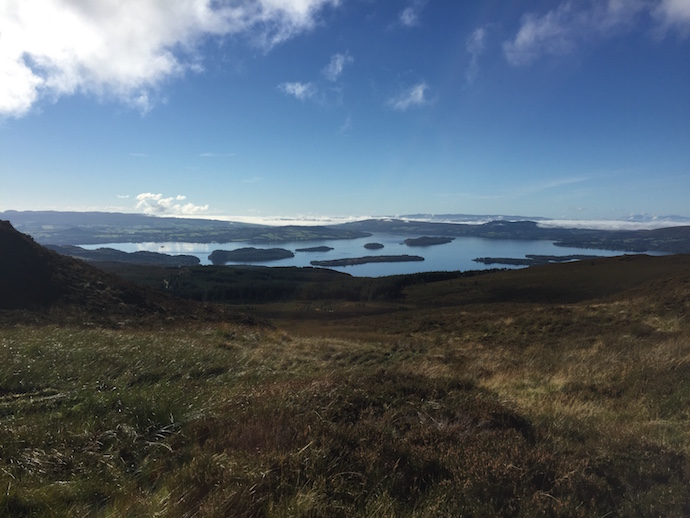 The gentle slopes make picking out summit detail trickier than usual, but after a while, the summit crag of Binnean nan Gobhar becomes visible. I decided to detour E to visit the trig point of Beinn Bhreac, which despite being lower gets its name in larger type on the OS map. 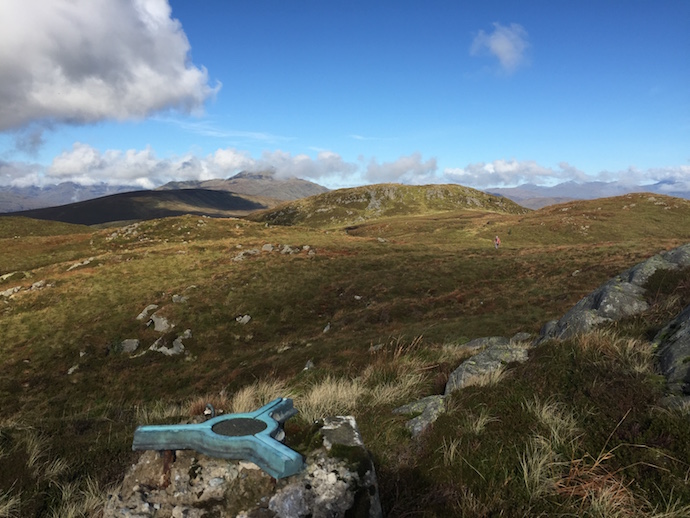 At this point I met another walker, and I thought "oh, this must be a hill bagger". Sure enough, it was weaselmaster, en route from Conic Hill. Since we were heading the same way, the rest of the day turned out to be a very sociable walk—and my first WH meetup

After skirting an enormous peat bog, we soon climbed up through Binnein's summit crag, to enjoy the views N to Ben Lomond (still slightly in cloud, but not for long) and E over Loch Ard forest to the Trossachs and the Forth Valley. 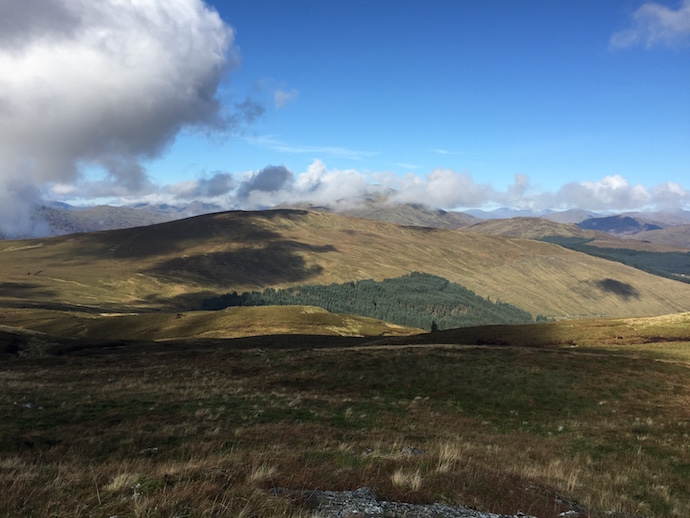 The route north to Beinn Uird didn't look too promising, but we managed to keep a decent pace through the usual heather and boggy grass mix, occasionally picking up another faint ATV track. With the amount of bog to negotiate, and the lack of altitude to get you to thinner, rockier soils, these are unlikely to be dry boots hills 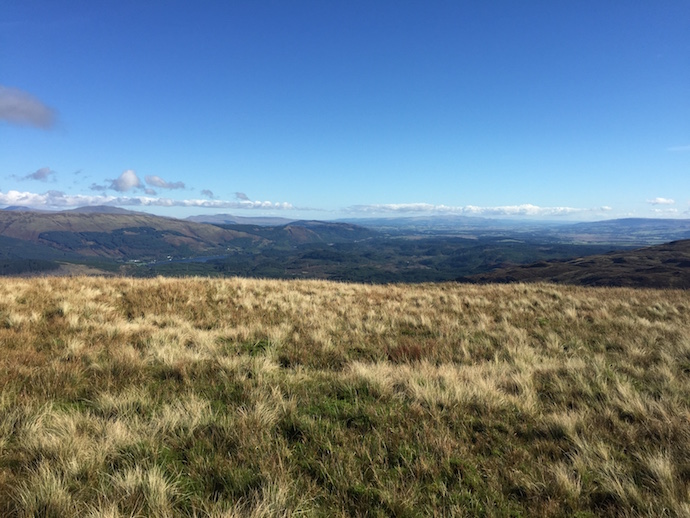 Aberfoyle and the Forth Valley from Beinn Uird 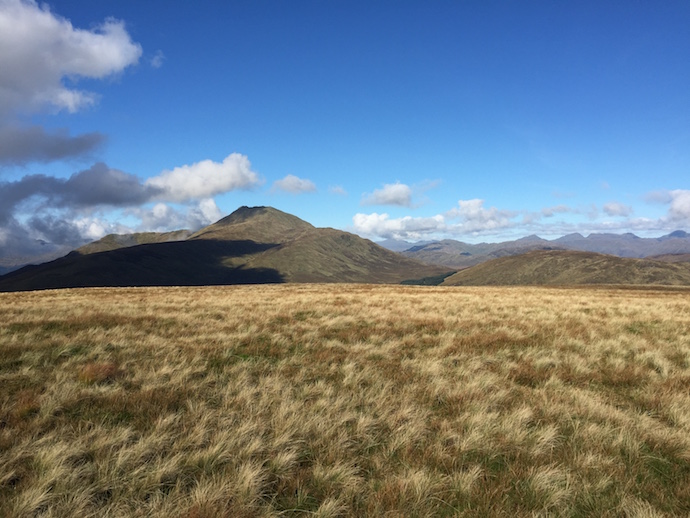 Ben Lomond from the top of Beinn Uird

Beinn Uird's summit is pretty flat, but we found the small cairn, and admired the views of the Luss Hills, and NE towards Lochearnhead, before deciding to head roughly SW down towards Blairvockie farm. (I remember a pretty rough orienteering race in Rowardennan Forest way back in 1989, and wasn't in too much hurry to take a short cut back through there…)

The slopes are gentle, with a couple of easy fences to cross, and lower down there are patches of short grass that made walking easier. Soon we were on the track that led us through Blairvockie farmyard, and after a slight detour through a field, we were back on the track down to the Rowardennan road. We followed this road, which by now was getting pretty busy, to Sallochy, and cut down to the West Highland Way along the shore. 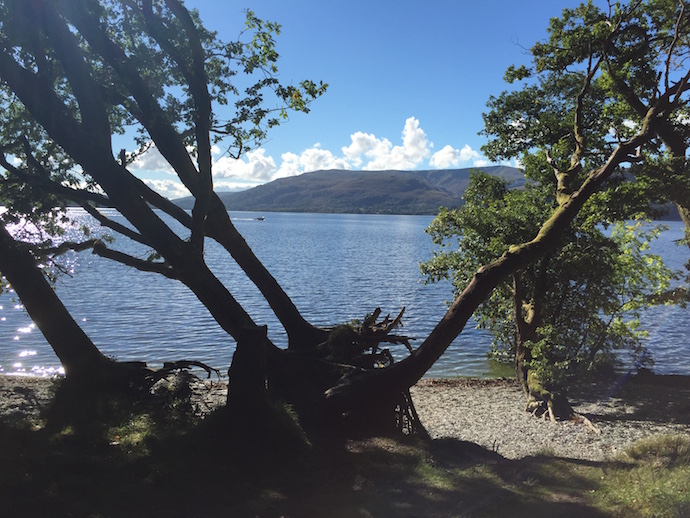 From here back to Cashel was a very pleasant, undulating walk that did its best to keep off the road. I gave weaselmaster a lift back to his car at Balmaha, which by now resembled the M8 in rush-hour. I left him to contemplate Duncolm on the way home, while I headed round to coffee and cake at the David Marshall Lodge at Aberfoyle, and a last look at the hills.