An unexpectedly lovely evening on the Hills of Cromdale

An unexpectedly lovely evening on the Hills of Cromdale

A badly forecast weekend of weather wasn't leaving me with high hopes for anything more than a wet ascent of Meall Fuar-mhonaidh for the umpteenth time. However, having spent the morning and early afternoon wandering around town and the housing expo, it was clear that things were better than predicted. High winds, but lots of sunshine, and crucially, the cloud base was above many of the summits.

With a holiday to Spain approaching in two weeks, my wife and I were preparing in different ways. While she was counting down the days and buying clothes, I was adding up the number of opportunities I might have to get out on the hills before we go! This afternoon suddenly seemed to present one of these.

A number of people have discussed expectation in their reports before, and how having high expectations of a route or area can sometimes lead to disappointment. It's fair to say I didn't have any great expectations for these hills, beyond getting some exercise in an area I hadn't visited before. Therefore I was pleasantly surprised.

The best way to do these hills is probably a traverse from Bridge of Avon to the A939 if transport can be arranged. With the other half working down here frequently, this might have been a possibility at some point. But with almost all my leave now allocated to other stuff, I couldn't see me getting down here midweek any time this year, so a circuit of some sort was inevitable.

our_route.gpx Open full screen  NB: Walkhighlands is not responsible for the accuracy of gpx files in users posts
I parked up at Wester Rynaballoch at about 4pm and walked SW back down the road for 150m or so. A gate in the fence and a rough track lead onto the hill. There are many tracks and paths marked on the map. These vary between new estate tracks and old rights of way to Strathavon, many of which are no longer obvious on the ground.

Strathspey from the initial ascent: 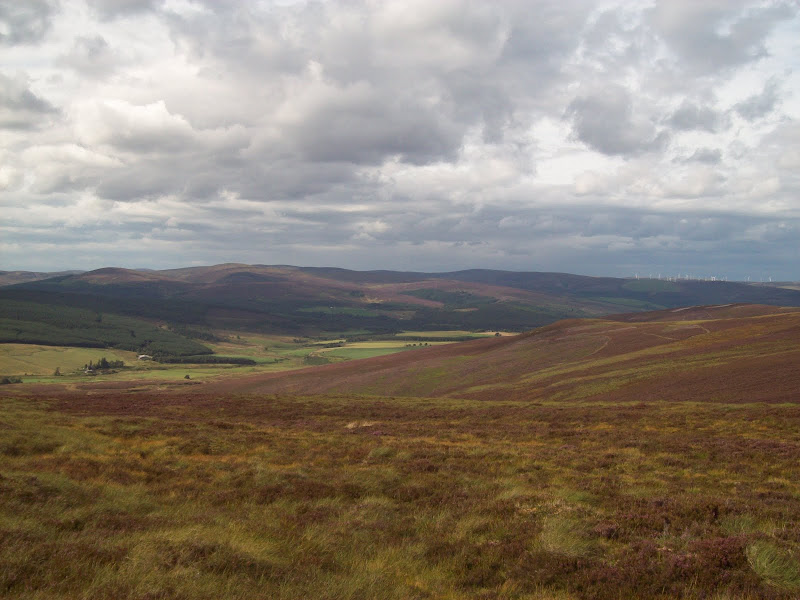 I decided to work my way towards Carn Eachie. Lower down I was following animal tracks, before crossing a burn and crashing through some heather, finally joining a wettish ATV track taking me to the ridge. From here, it was an easy but surprisingly long walk over soft ground from here across Carn Eachie to the summit of Carn a Ghille Chearr. A path, faint at first, but becoming more obvious, led the way. 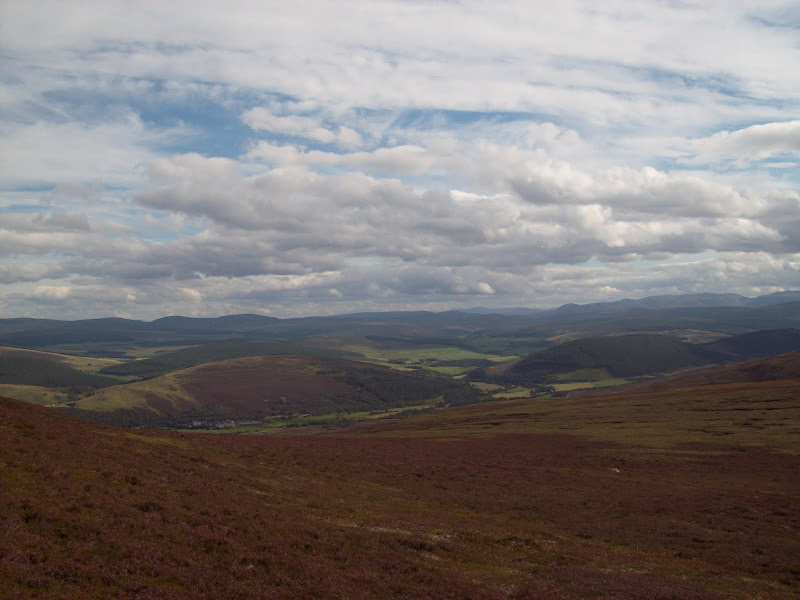 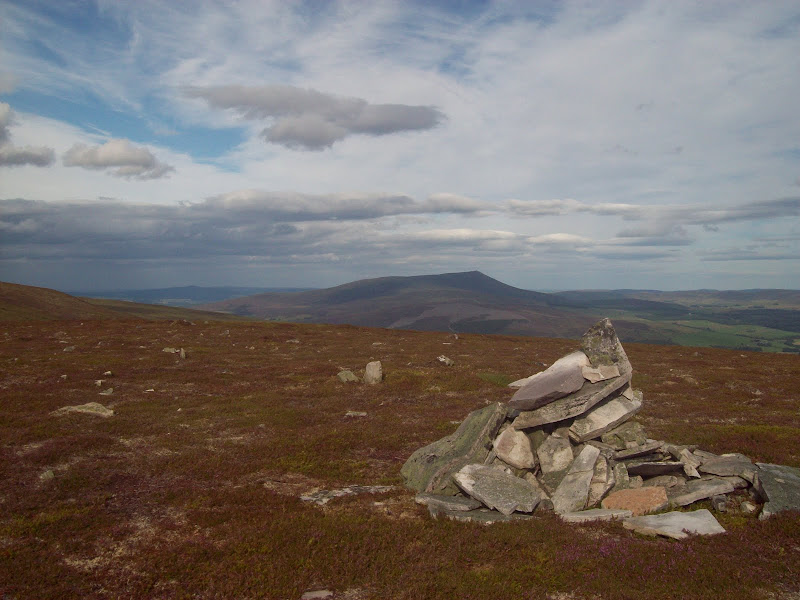 South to Chreagan a Chaise and the eastern Cairngorms: 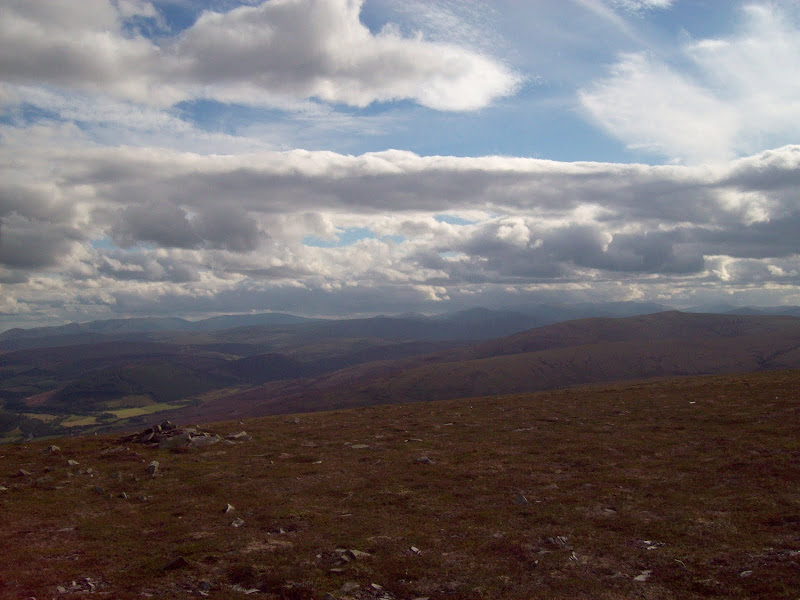 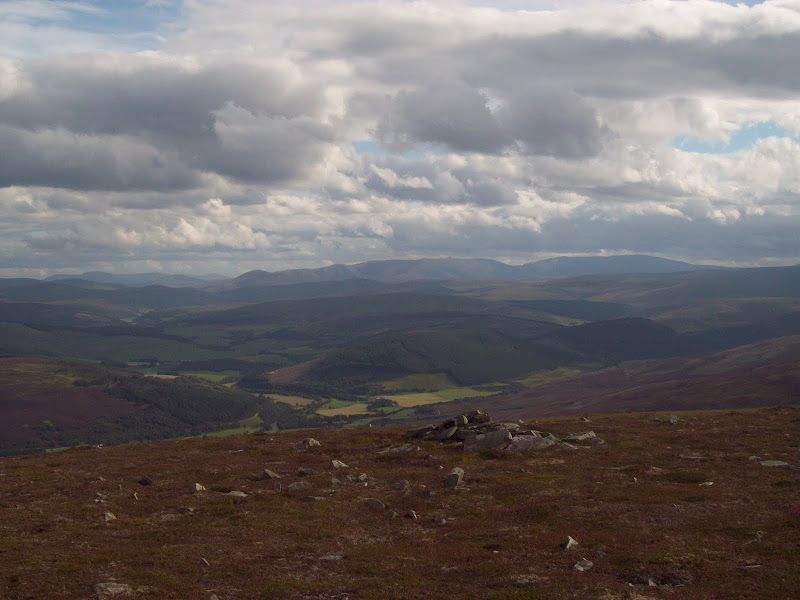 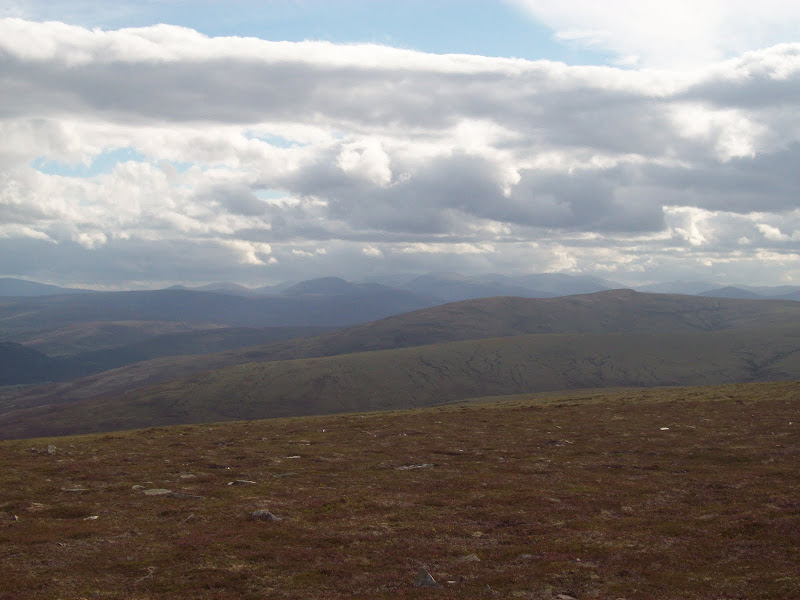 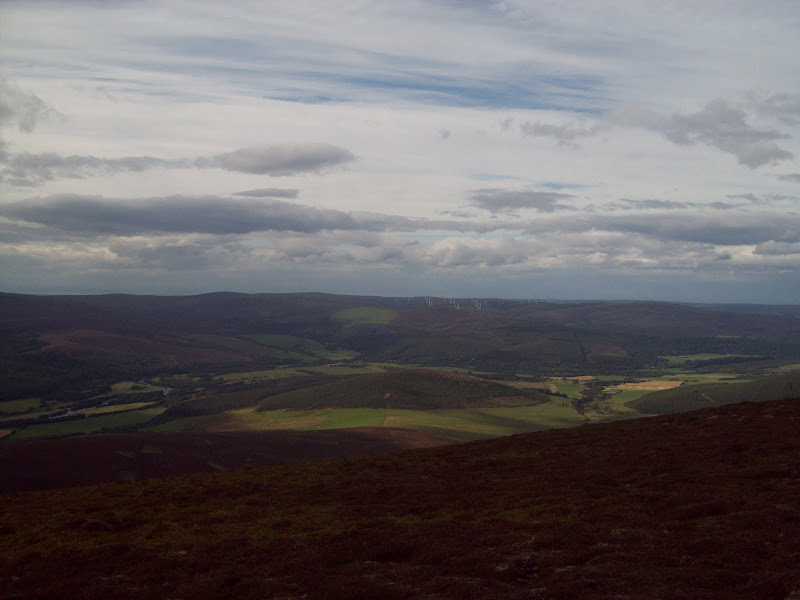 Cairngorms from Carn a Ghille Chearr: 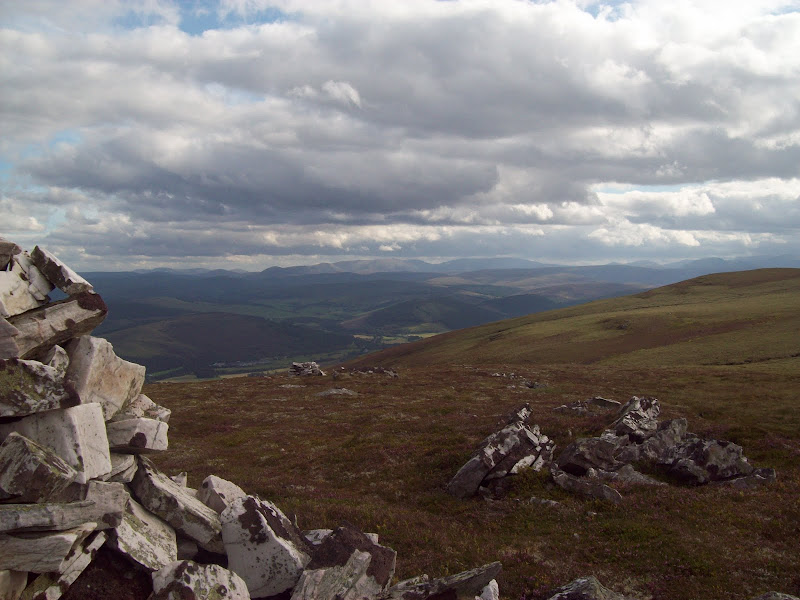 The best views east were from a slightly lower cairn to the east of the summit. From this point, a game of Distillery Spotting could be played. 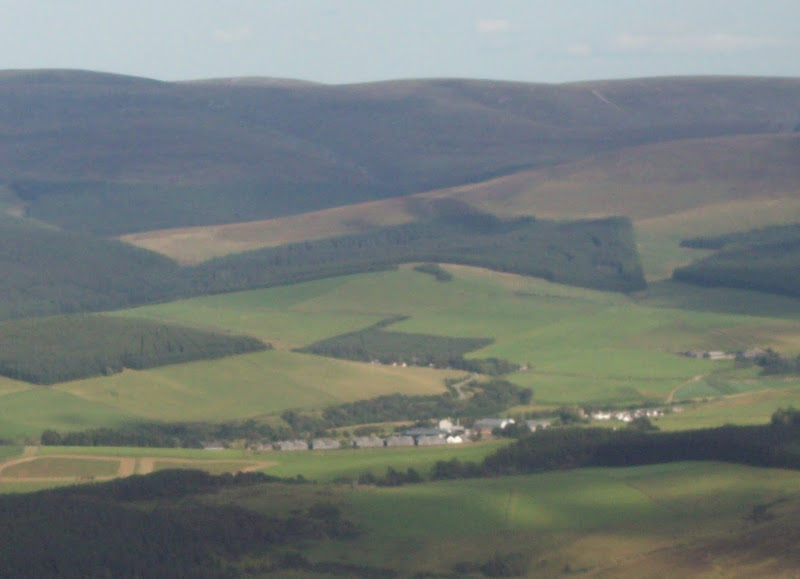 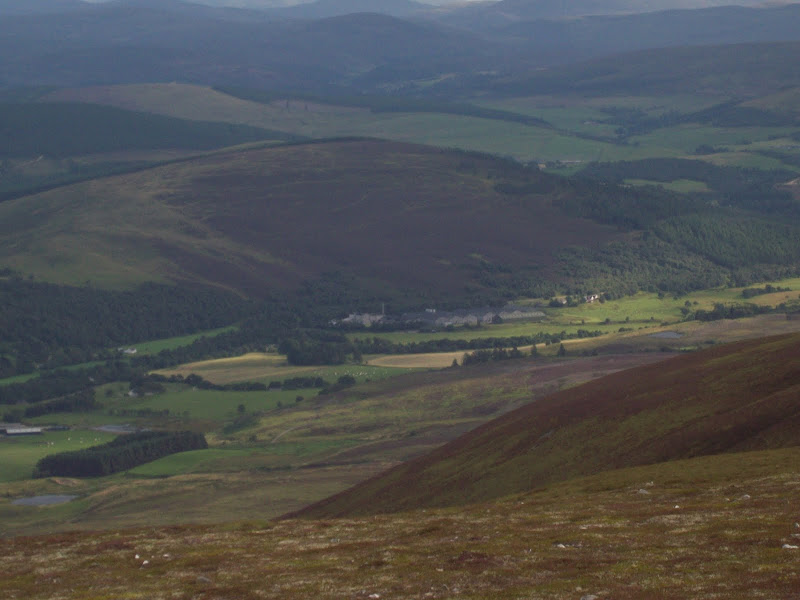 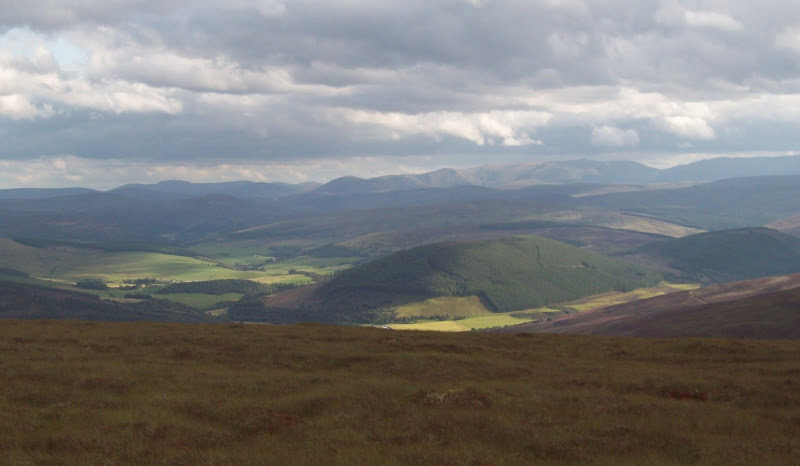 I retraced my steps south from the summit back over Carn Eachie. The central part of the ridge between the two summits was virtually pathless, and very soft. The occasional peat hag intruded. However, approaching the large cairn on the ridge, various paths and ATV tracks reappeared. I stopped a the cairn for a break. This is the coronation cairn, built to commemorate the crowning of King Edward VII and Queen Alexandria in 1902; a great bonfire was lit here. (forgot what it said by the time I got home, so that was lifted from the Walkhighlands route description. Cheers Paul!)
The pleasant afternoon was turning into a beautiful evening at this point (although still breezy). I wasn't on the hill late enough for a sunset, but there is still something about the light at this time of the day that just makes things better. All the grass was glowing yellow, and there was a beautiful contrast between the the patchwork of the fields in Strathavon and Strathspey and the heathery hillsides.

North along the Cromdale Hills to Carn a Ghille Chearr: 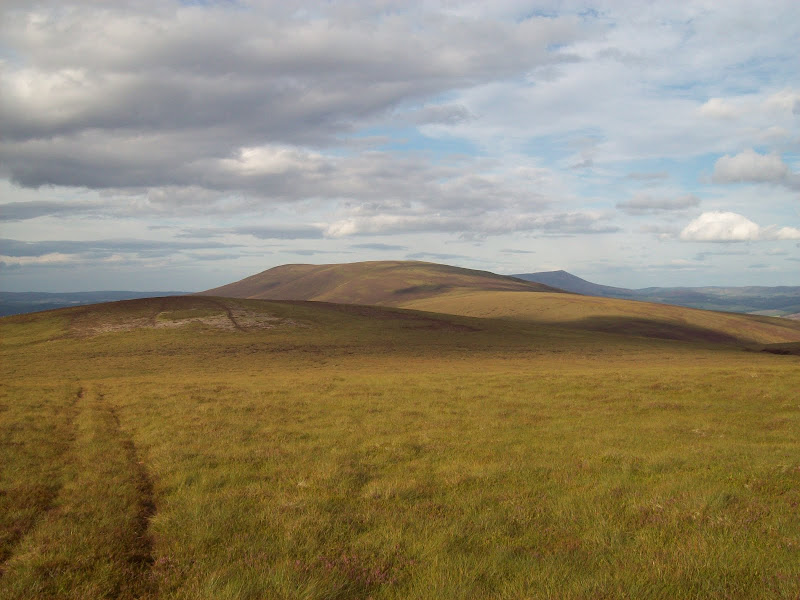 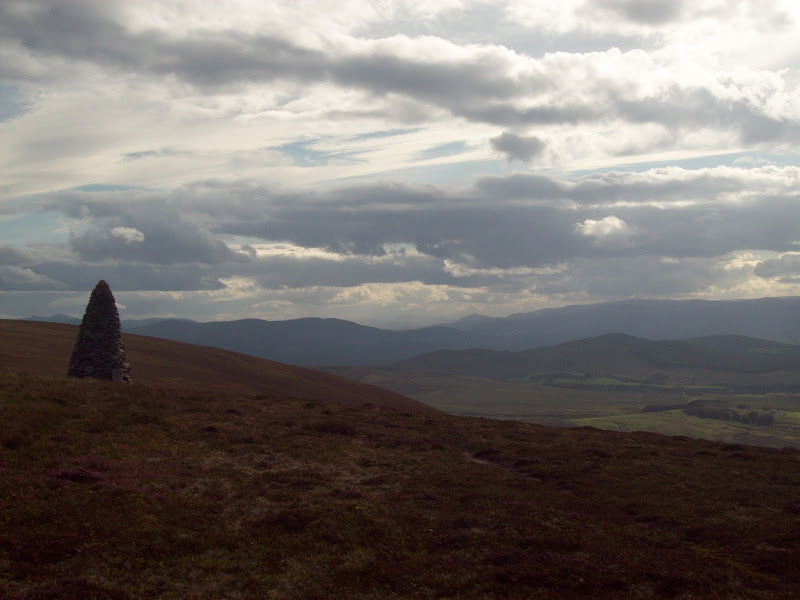 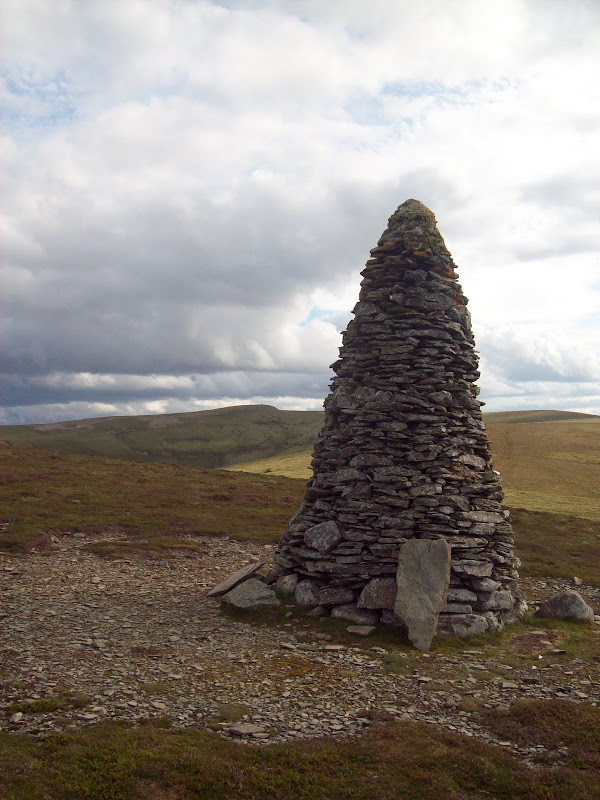 South to Creagan a Chaise: 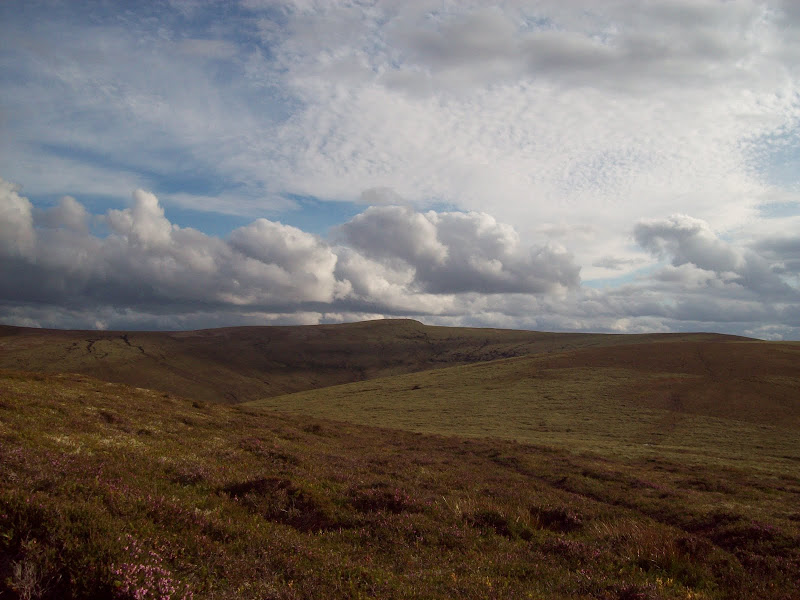 Creagan a Chaise has a steep enscarpment at the summit, in contrast to the smoothness of the rest of the range. Another large cairn on the summit, rivalling the trig point plinth on Ben Nevis for size. This one was for Queen Victoria's Golden Jubilee. Views to the Cairngorms were spectacular.

The Cairngorms don't often rival the likes of Glen Coe and Torridon for looking interesting from a distance, but this evening they were stunning. Anyone on Ben Avon at this point would be having a great (but windy) evening.

Summit of Creagan a Chaise: 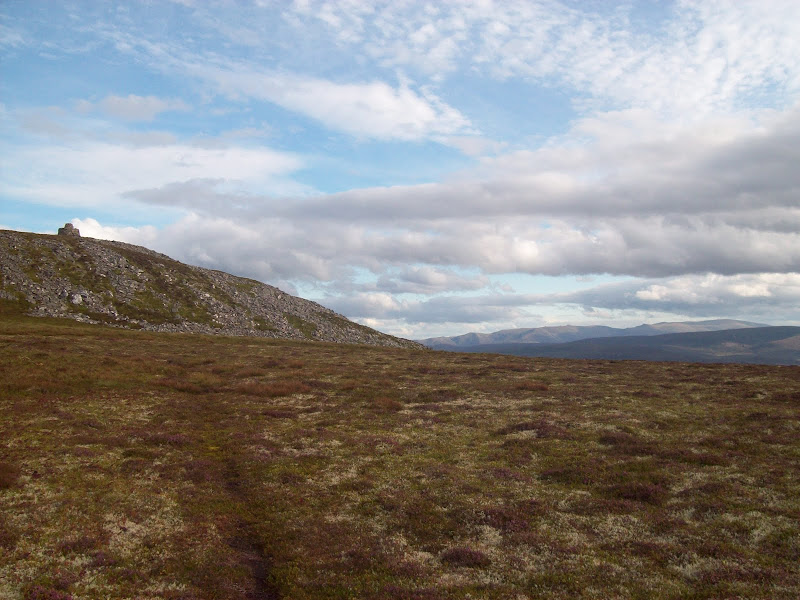 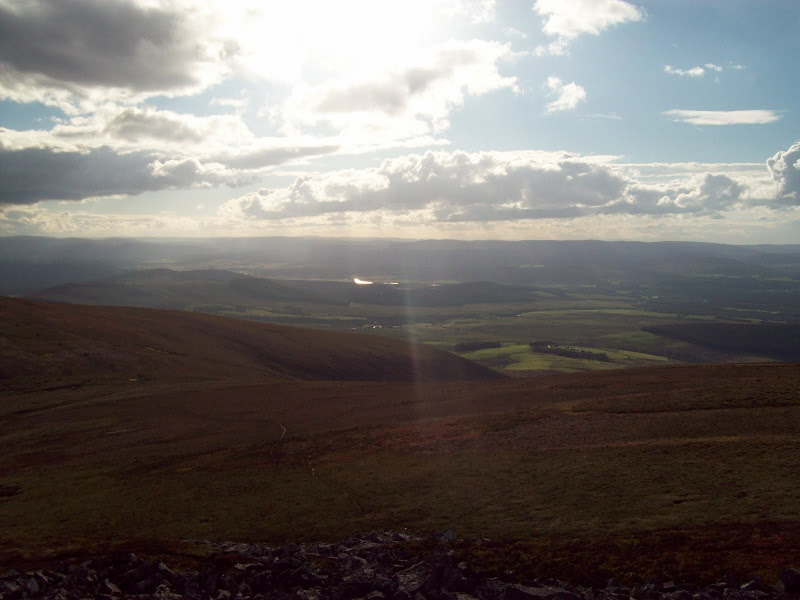 East to the Ladder Hills: 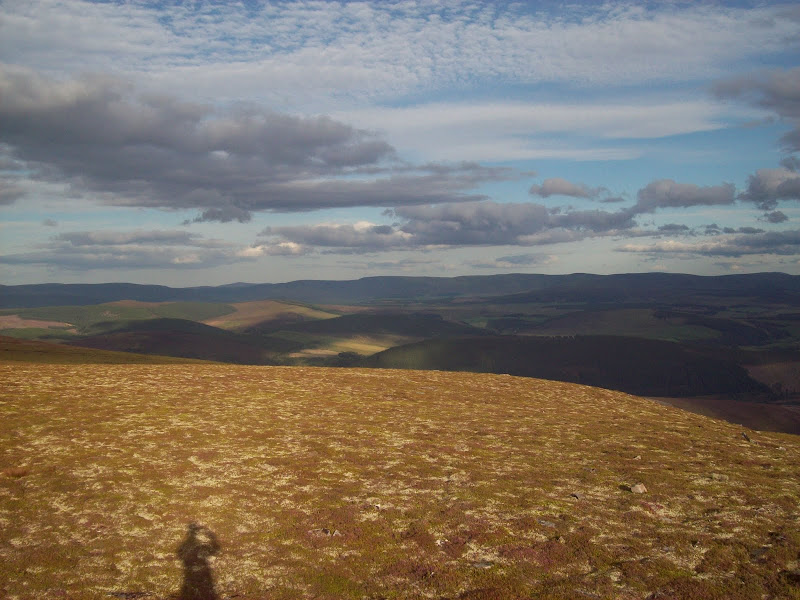 Lochnagar and the eastern corries of Ben Avon: 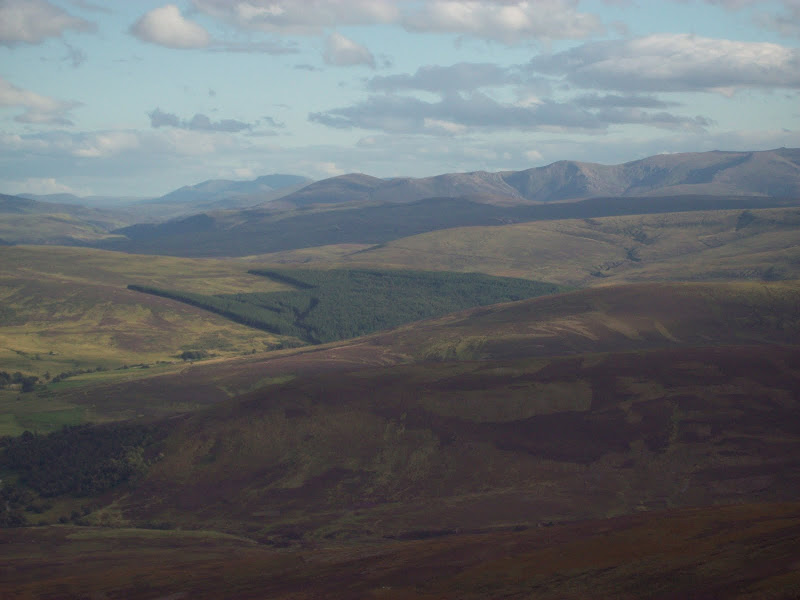 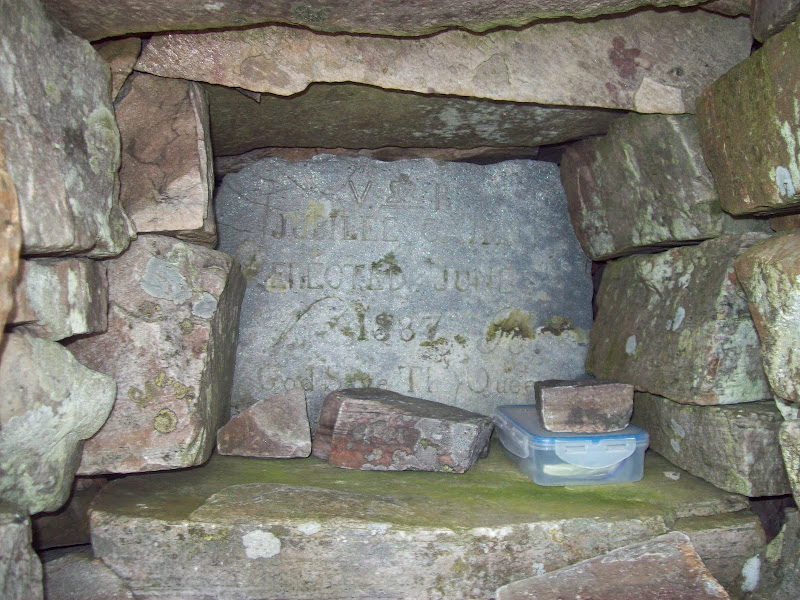 One of the strangest things on the summit was a patch of nettles next to the trig point. I don't think I've ever seen nettles in such a high or exposed location.

Hardy nettles next to trig point: 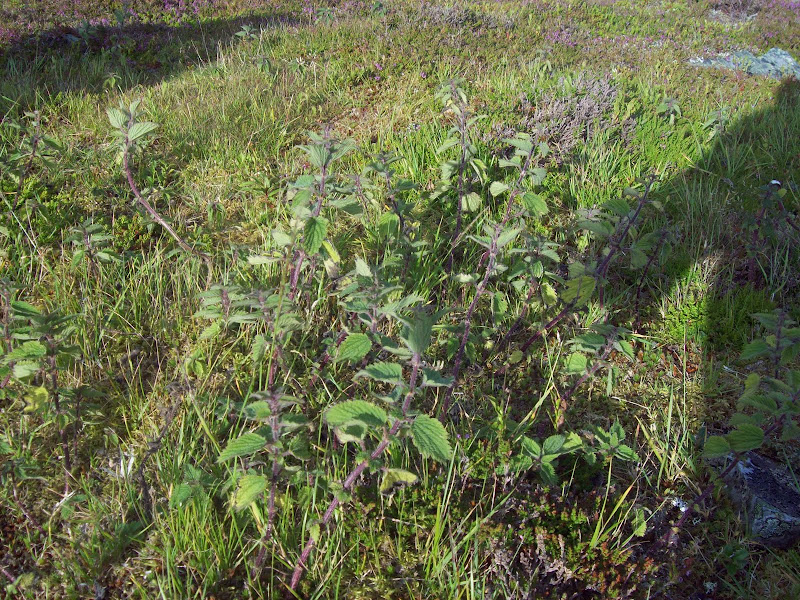 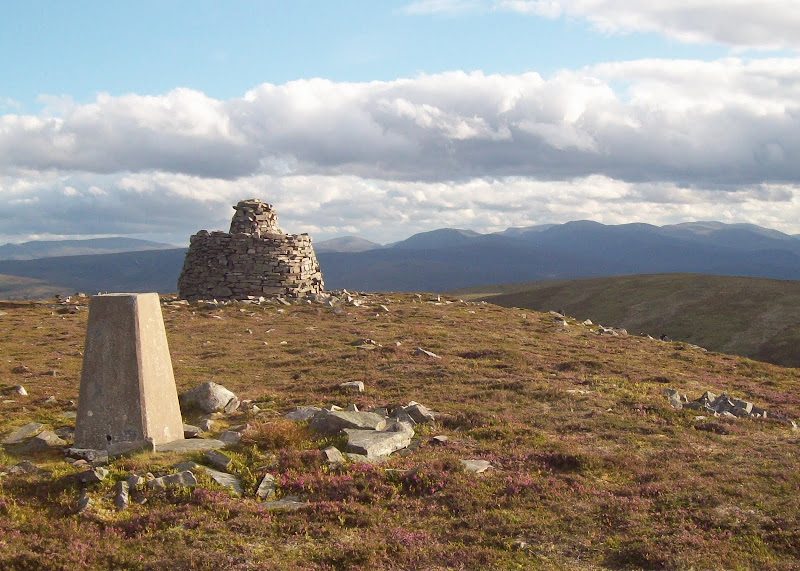 Cairngorms from Creagan a Chaise:

North from Creagan a Chaise to Carn a Ghille Chearr: 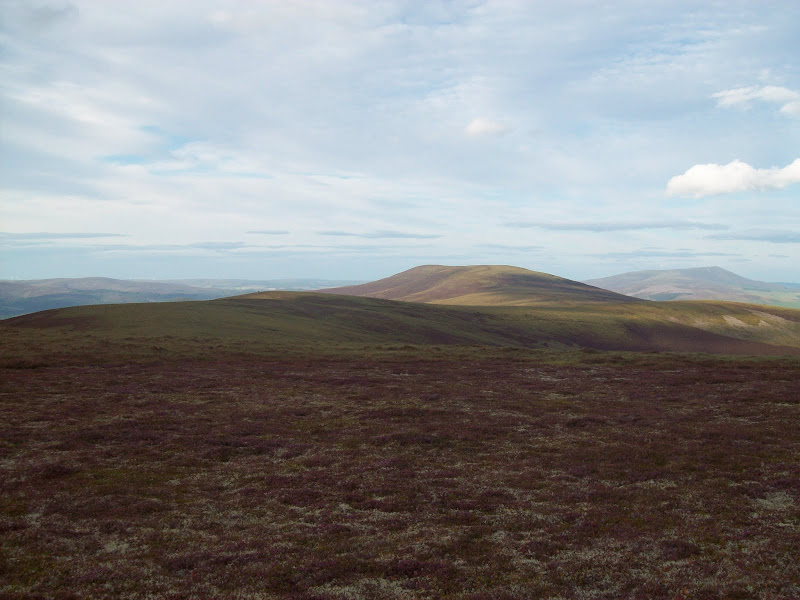 I retraced my steps to the coronation cairn, then headed down the hill towards the car. Again there was no path on my particular route, but the going was OK. Rough heather is much easier on the way down! I climbed a couple of gates and found myself back on my original ascent route, a few minutes from the car. I got back at about 7.25pm.

Due to my low expectations, this ended up being a great afternoon/evening out. Took the scenic (possibly slightly shorter) route home overthe Dava moor and across to Cawdor.

There are similar hills near Peebles which I like to stretch the legs in. As you say, when you go with low expectations, even the most "routine" of hills can still pleasantly surprise you

Good stuff malky, I could almost see you from Ben Rinnes yesterday

The hills on left to centre may be your grahams? The wind farm just sneaks into the pic on the far right(very hard to see on the forum size pic). 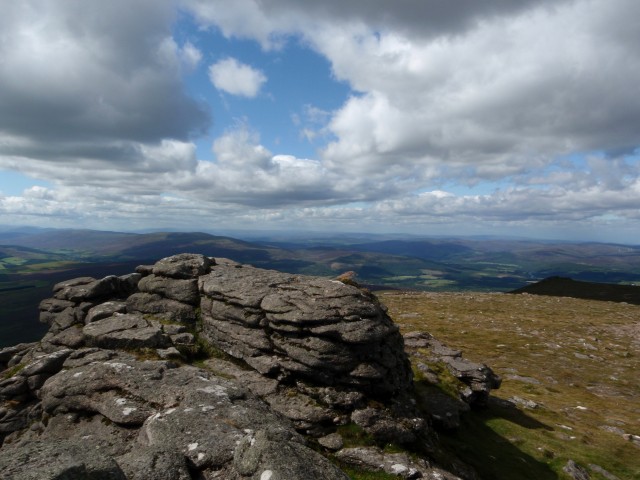 Wish I'd gone out now

You were just along the road a bit from me.... I'm laying claim to those hills now

I wondered about those cairns and what their significance was - thanks for clearing up!

Paul Webster wrote:You were just along the road a bit from me.... I'm laying claim to those hills now

I remember you put a photo from Carn a Ghille Chearr in the 'where's the photo' thread recently and I couldn't work out what hill it was from. Nice local hills

The hills on left to centre may be your grahams? The wind farm just sneaks into the pic on the far right(very hard to see on the forum size pic).

Think you're right, although I tend to find that all the lower hills in the general Moray/Aberdeenshire/Angus area look pretty similar!

Hope you don't mind me adding a couple of images to your report.
On descent from the main summit I came across the Clach nam Piobair or Piper's stone .....wonder if the Cromdale folks were raised to battle pitch by having the piper playing from the top of the stone? 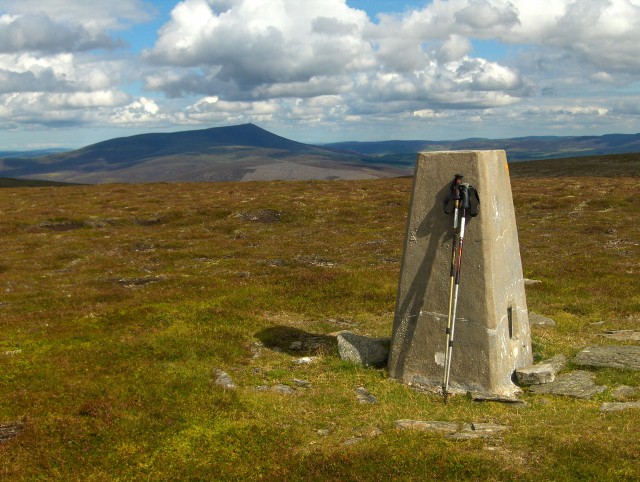 When I grew up my the view from my bedroom window were these hills. I never climbed these hills.

I do think I was at the top of Carn a'Ghille Chearr when grouse beating but not 100% sure.

I guess I better do these hills at some point on a visit home.