I’ll get onto the subject of my title later, but keep you guessing while I talk of our Friday afternoon walk as we headed north for a weekend in Torridon Youth Hostel. The Marilyn of Bidein Clann Raonaild must be the easiest summit in the neighbourhood with a track all the way to the summit assemblage of cairn, mast and telecom cabins. The only difficulty of a locked gate was easily avoided by the hole in the fence reported by previous authors. On Saturday the weather was predicted to worsen by the afternoon, and the speed of the clouds rushing past the surrounding summits did back that up. Full of hope that the Met Office was being pessimistic and the rain would hold off till late afternoon we parked in the car park in front of the Torridon Inn and set off for Beinn na h-Eaglaise. The route starts through the courtyard to the left of the Inn and soon turns left and crosses the main road. Here the rhododendrons of the guide book route description have been almost exterminated with a few shoots struggling to emerge from the stumps. A fine stroll up through the forest for about a kilometre passes a spectacular waterfall where the Allt Coire Roill must plunge over 30 metres. If you want a good view of it there is a ‘path’ that descends steeply for about 12m into the deeply incised river channel followed by a short traverse. Crossing the Allt Coire Roill above the waterfall. Once over the stream and out of the shelter of the forest the wind started to make itself noticeable, and before we left the path it was time for waterproofs when the rain arrived. As we climbed the wind strengthened and we ascended into cloud. The wind was really wild on the summit ridge threatening to blow us over. We found a cairn, but it was before we reached the 736m spot height marked on the OS map. We could vaguely see the ridge falling then rising again to our SE and as we ate our hill food in the shelter of the cairn debated whether we were at the highest point or not. I walked about 150 metres into the mist to find another point which appeared to have the base of a dismantled cairn on it. My Garmin’s altitude readings were too erratic to decide if it was higher than the cairn or not, so we both visited that other possible summit before heading back down into quieter territory. Is that a smile or a grimace from Jaywizz as we leave the summit ridge?
With a view of what lay below us we managed to choose a gentler route down that avoided some of the rockier sections we’d zigzagged around on the way up. Back at the car park we compared our Garmin 64’s statistics for the day. Jaywizz’s Garmin told us she’d ascended 1090m to climb a 736m Graham and mine said I’d done even better and had climbed 1259m! Well, I had visited the second ‘summit’ twice and descended 12m to photograph the waterfall, but that would not have added more than another 35m in total. The explanation has to be that the strong wind gusting over the top of the ridge caused pressure fluctuations that were interpreted as altitude changes by the barometric altimeters in our Garmins. Even while sitting behind the cairn our height climbed statistic was being increased by every gust of wind. Counting the contours gave a more believable number of about 800m for the day’s total ascent.

I downloaded the record for our walk from my Garmin and plotted out the measured altitude for the 34 minutes between us approaching the cairn and leaving it for the last time. The orange line at the bottom shows when I was in the vicinity of either the cairn (thrice) or the other 'dismantled' cairn (twice). The altitude leapt up and down by up to 40 metes while we were sitting by the cairn. With each excursion adding to our height gain statistic its no wonder Beinn na h-Eaglaise apparently became the highest peak in Torridon.

The guide book recommended a knee-friendly ascent route up this Graham – so we took it. While other guests in the Youth Hostel were still complaining about knees punished by Liathach’s steep rocky paths, we enjoyed a gentle ascent. The first half was along a stalkers’ track which cannot be in regular use since it was blocked in several places by fallen trees, and they hadn’t toppled recently. 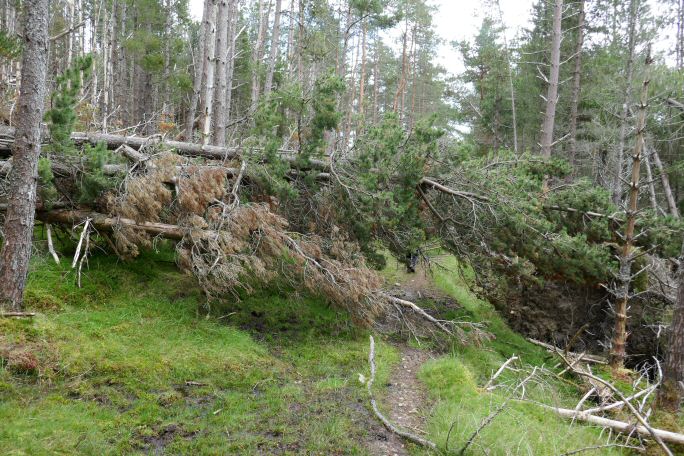 After the path climbed out of the glen and reached its high point before dropping into Srath Chrombaill, we turned east then swung to the SE along a broad ridge to the summit and its small cairn. An easy ascent over areas of stone striped ground – a typical periglacial feature found on many hills in the area. A short - and quiet - stop at the cairn compared with the day before. On the way down I tried cutting the corner, but that just led us into climbing in and out of parallel gullies so I swung back to our ascent route.
Heading back down the stalkers' path. Looking down the glen to Loch a'Chroisg Afterwards we had our second stop of the weekend in the excellent Whistle Stop Café in Kinlochewe.

Without the strong winds of Saturday both our Garmins gave similar figures for height gain of 557m and 578m (we didn’t take identical routes). A contour count came up with 545m and wouldn’t include, for example, all the ups and downs of crossing gullies. So I am willing to believe my Garmin’s figure for the day.

Before heading home on Monday we chose a short walk up a Graham to the west of Beinn Alligin. It was below the clouds that kept shrouding the tops of that Munro. We parked at the usual spot just past the lochan on the Bealach na Gaoithe and took an obvious path, but soon realised it wasn’t going our way. Heading more directly towards our summit we soon reached Loch nan Tri-eileanan which lives up to its name. We found that they threaded quite sensibly between or over the numerous hillocks and round to the lower slopes of An Ruadh-Mheallan. Still being kind towards our knees we took a comparatively gentle route to the top where we found a fellow walker awaiting. He’d taken a more direct route and overtaken us. We had a brief chat before he departed. The cloud level had risen and Beinn Alligin was now clear. We stopped for a snack sheltered by the summit boulder from the cool wind then returned by our ascent route. Afterwards contour counting and the downloaded Garmin altitude profile suggested we had climbed perhaps 500m, but the two Garmins’ own accumulated data gave 561m and 593m. Again the wind had caused pressure fluctuations that had added to our height climbed during our 20 minutes on the summit, though not as great as those on Beinn na h-Eaglaise.

In conclusion a fine weekend's walking despite Saturday's challenging conditions, and a lesson learned about how our Garmins can lie to us.