Traversing the Cairngorms (without a tent)
Here’s a question: How would you traverse the Cairngorms over 3 nights without recourse to a tent? South to north from Linn of Dee? West to east from Glen Feshie? Using Corrour Bothy, Hutchison Memorial Hut or Bob Scott Hut? As a DofE Gold Assessor this would be my DofE Diamond Challenge, to mirror a Gold Expedition.
The Duke of Edinburgh’s Award (DofE) supports over 300,000 young people every year across the UK. Over 30,000 are from disadvantaged backgrounds. Youth leaders supporting DofE participants inspire and guide them to develop skills for life and work, making a world of difference where young people can reach their full potential, whatever their circumstances.
DofE has gone international. Over the last 60 years millions of young people across the globe, from all backgrounds and circumstances, have challenged themselves through their DofE Award. The experience and achieving their Award is setting them up for life, opening doors to new jobs, cementing life-long friendships, broadening interests and stretching horizons.
Celebrating the Diamond Anniversary the DofE presented me with the chance of fulfilling the dream of traversing the Cairngorms in a 3 night / 4 day expedition using bothies or whatever shelter might be available. And if friends sponsor me for the privilege that would allow more young people the opportunity of planning their DofE adventures.
The timing for my expedition narrowed to a small window when my Army Reserve companion would be available and I too could slip away from a busy workload. This meant travelling to the Cairgorms after office hours. So no long walk-in to begin with. The first night had to be within a reasonable yomp from a car park. 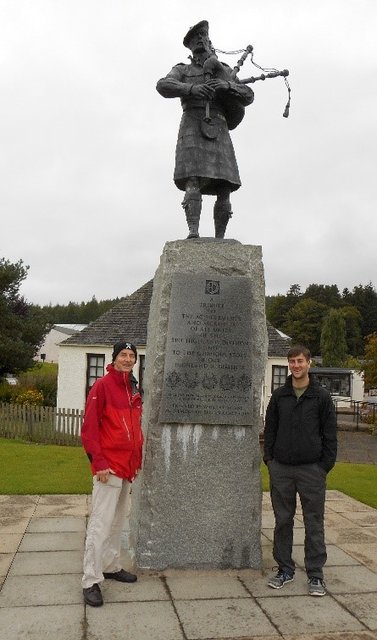 51st Highland Division monument on the A9 en route to the Cairngorms.


51st Highland Division Monument on the A9 to Aviemore
That, I often mused, probably explains why the El Alamein Refuge Hut is tucked away on the NE flank of Cairn Gorm. The Soldiers of 51st Highland Division would cut away on Friday afternoon, pitch up at the lower car park (in their day the only car park) and then make the 500m ascent over 3½ km to the boulder field beyond the northern spur of Cnap Coire na Spreidhe. It was then a case of identifying, in the late evening gloom and lowering mist, the pile of stones that constitute the Refuge Hut.
This we did on a direct bearing on 350m of pacing. The roof showed signs of renovation and the tightly bolted door opened to a clean floor fit for two. Clearly seldom used. Meal on, quick scoff, heads down. We hadn’t calculated on the clouds condensing on the round granite boulders of the roof to deposit laden drips on us; otherwise our sanctuary was sound. 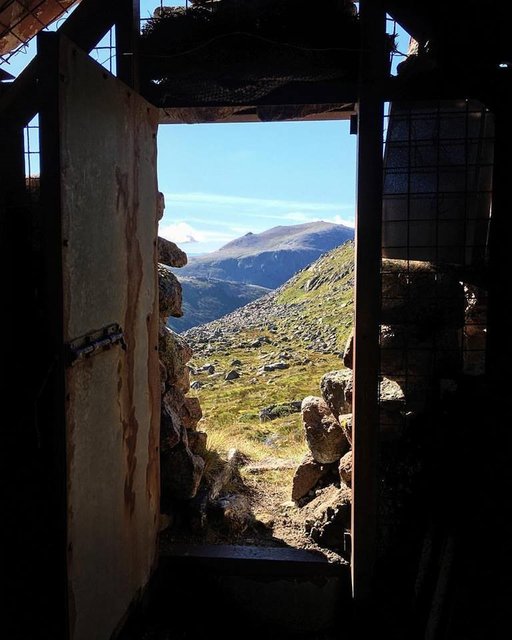 
There is no finer prospect than opening the Refuge Hut door to see the tors on Beinn Mheadhoin (pronounce "Vian"); the remote Munro in the heart of the plateau. After a sedate breakfast we aimed for morning coffee at the Ptarmigan Restaurant (rear door entry for walkers) and lunch on Cairn Gorm itself. There then followed the long descent to Loch Avon (pronounced A’an), and the unique thrill of sleeping under the Shelter Stone. 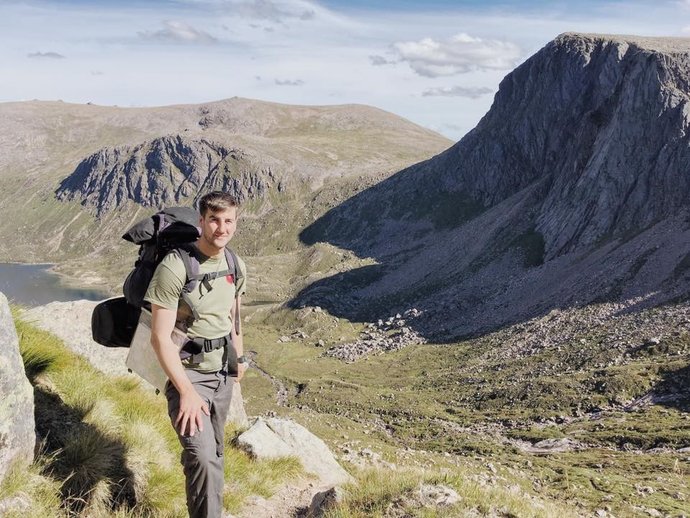 Two English teachers from down south were already encamped with their tent erected under the Shelter Stone. We waited among midges and walked briskly to and fro over boulders to avoid them eating us as we tried to eat our evening meal. The occupants returned from their adventures: swimming the length of Loch Avon! Vicki and Jude kindly collapsed their tent and gave floor space, which we prized no less than the many climbers who huddle here in winter.
Suspecting the English teachers were not morning people, we were on our way at 8 a.m. on the steady ascent to Loch Etchachan before picking up the whale-back ridge to the summit of Beinn Mheadhoin with its line of tors named the Barns of Mheadhoin. It’s the descent that often catches people out so we continually checked our route through the various crags on the NE slope as we descended to our final overnight in the Fords of Avon Refuge.
Having arrived by midday and consuming a large lunch, it felt a bit phoney to take such a prolonged rest in what is marked on the map as a Mountain Refuge Hut. So a quick map appreciation and we estimated 4 hours to return from Bynack More by the less trodden southern approach, via more tors, the Barns of Bynack. In fact it took 3½ hours including time for photos and catching up with text messages that flooded in from Aviemore, but we had left our packs to travel light. 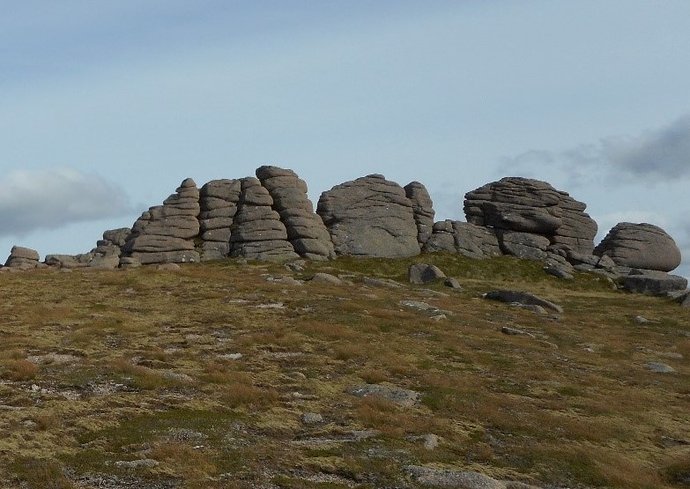 The Barns of Bynack from the southern approach.


The Barns of Bynack
Despite the hard wooden floor we slept soundly. The Fords of Avon Refuge was built by Fleet Air Arm ratings under training in June 1970 as an emergency refuge. It is on record as having saved a number of lives, being the only shelter for many miles in an area where people seem to excel at getting lost.
Another early start on our final day to scale Beinn a’ Chaorainn, and a long trek over the peat hags and moorland of Moine Bhealaidh to Beinn Bhrec, our 5th Munro of the expedition. Now the weather was turning and driving rain arrived as we made the long gradual descent to the shelter of the Caledonian Forest before reaching Derry Lodge for a restful lunch with the sun’s return. 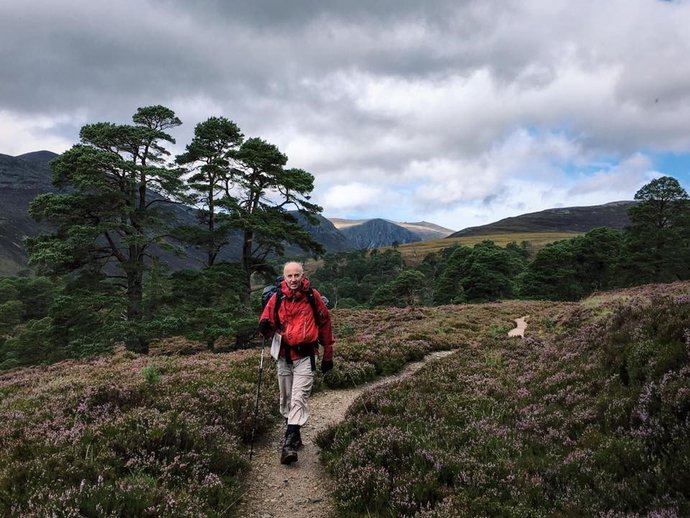 Heading through the Caledonian Forest to Derry Lodge and on to Linn of Dee. The Barns of Beinn Mheadhoin on the distant horizon.


Through the Caledonian Forest, somewhat bedraggled after a prolonged shower.
If circumstances dictated a short walk-in, we extended the long peaceful trek out from Derry Lodge to Linn of Dee, detouring to investigate the waterfall and salmon ladder on the Lui Water but the banking and steps were under repair so could not see much. Nevertheless the torrent passing through the gorge here and the force on the River Dee were impressive even with water levels lower than the surge of Spring. It was no hardship to wait for transport at this RV and luxuriate on an expedition well executed.
Of course, I had carried my tent with me. DofE puts a priority on safety and having a Plan B. But essentially it’s in planning and doing such expeditions and setting personal challenges that young people gain a sense of purpose, self-conﬁdence, responsibility and resilience. It’s also great fun and satisfying to appropriate a genuine sense of achievement.
With continued funding through the Diamond Fund initiative and with the valued contributions of adult leaders, the DofE Award will continue to inspire young people from all backgrounds who are work-ready, well-rounded and ambitious, with the skills that businesses and society needs.

so what route did you take from the Fords of Avon to Bynack More? did you just go straight up?

An area I know very well myself from numerous DofE expeditions over the years (and the odd personal trip for good measure too). Thanks for sharing, and keep up the good work.