The Mountain Weather Information Service (MWIS) forecast 90% chance of clear Munros, low probability of precipitation and very low wind speeds; the perfect forecast for camping up high. There were a couple of hills that I had plans to camp out on, this and Beinn an Eoin (Coigach). Camping out on Beinn Ghobhlach on this particular day was an on the spot decision and I needed to quickly pack a rucksack with overnight gear.

I decided to take a litre flask of coffee and a food flask of Irish Stew, thus saving the need to take a stove and fuel.

I packed my Crux eVent/Down jacket, which I have worn in Kazakhstan in temperatures below minus 30 degrees C.

Even with the stainless steel flasks, my pack was very much lighter than when carrying coal into Benalder Cottage two weeks earlier.


It was approaching noon by the time that I had set off. I had not factored in the road works at the Dornoch Junction on the A9. There was an escort vehicle taking traffic through in one direction at a time and this delayed me by about half an hour

. Once through and a mile or two further down the road, I realised that I had forgot my LED lamp.

I had a head torch but I like to carry a lamp for overnighting in the hills, partly as a longer lasting and brighter light in the tent, but also as back-up should my head torch fail.

So I did a u-turn, and yes, it took me another half hour to get through the road works!

My family were very surprised to see me back so soon. I picked up both my camping lamp and an even more powerful bike lamp. Had it been summer, I would not have returned but with long dark nights, a good light source and back-up makes a big difference.

Heading out again, I decided to head north up the A9 and take the B9168 into Dornoch and back out via the Lonemore Road to rejoin the A9. Unfortunately, other people had a similar idea so there was a lot of stopping at passing places, but it always feels better to be moving. Next, I realised that I had forgot my wallet

, but I had plenty of petrol in the tank for the return trip, so I continued, with the thought of missing the sun setting nagging at the back of my mind. It was turning into a race against the sun!


Though I was running late, I still stopped for a few quick photographs of An Teallach. I nearly missed the turning for Badrallach, but after a couple of more photo stops, I arrived at the car park at around 1445.

After letting a couple of locals know that I would be leaving my car overnight, I set off along the good path while looking across a very still Little Loch Broom approximately 50m below me. On approaching a small headland, I could see something in the water. It dived into the water more smoothly than a duck and it's movements seemed more playful. I quickly realised that it was an otter and moments later there were two of them! I passed a couple of archaeologists further along the path and chatted briefly before continuing to the point next to a burn where I began to attack the hill up steep, uneven, bracken covered slopes. I was pushing hard now. I knew that I would have enough daylight to pitch my tent but I wanted it pitched before settling down with my coffee and stew to watch the sun set.

​Higher up, the gradient eased and I could see my objective ahead. My plan was to look for a good pitch on the left had summit below.

The summit (Graham) is to the right.

The climb up the rest of the hill really was not too bad as I made a rising contour around the hillside; approaching my objective from behind. With the tent pitched on a nice soft, grassy patch, where I could push the tent pegs in all the way, providing some sense of security should winds develop, thus preventing my being swept over the crags dropping down to Loch Broom. I then wandered over to the nearby cairn and then dropped down to a smaller cairn that marked the end of the ridge and steeper ground. I scolded my tongue on the coffee as it has stayed very hot but the Irish Stew in the food flask was only lukewarm. I think the food flask Idea is fine if heating the food immediately before heading out onto the hill and eaten within four hours.


Then I began to take photographs. The sunset was a disappointment but the views were not: 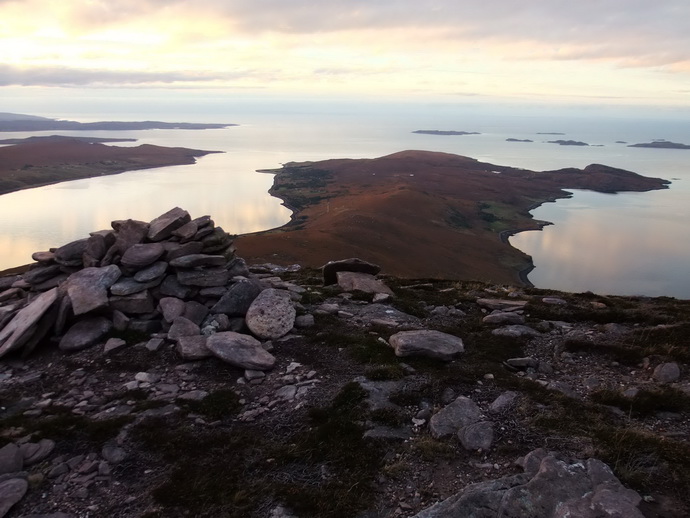 Hilleberg Soulo - time delay selfie. There is a steep drop a short distance beyond the tent. I didn't fancy being blown off over that! 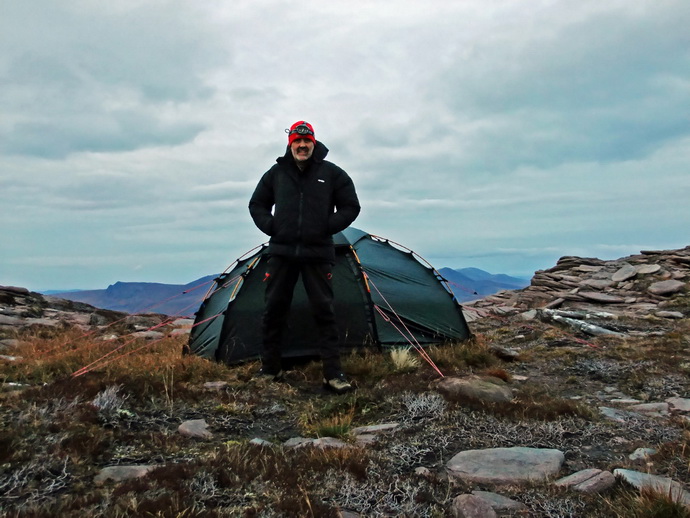 I woke up every few hours and got up and wandered about - I had hoped for some spectacular norther lights, but no such luck. It was very mild for October and I was happy to wander about a bit. One thing that struck me was the number of lights I could see below. We think of the west coast as having a low population but it is high compared to further inland. I could see lots of lights on Lewis and the lights of quite a few boats. Also, it looks as though there are street lights at Achiltibuie - there seemed to be a lot of lights for such a small hamlet. Not my highest camp - Coire Min on Beinn Sgritheall would have been higher, but it is the most exposed place I have ever camped. 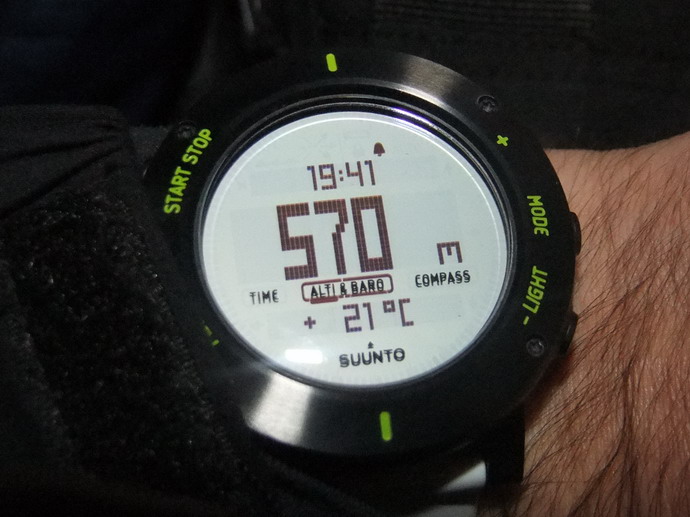 I was up at around 0630, had some coffee and breakfast buscuits and had everything packed by around 0745. I wanted to leave it late enough to ensure that I did not leave anything behind but to be walking along the ridge during sunrise. Beinn Ghobhlach summit cairn with An Teallach/Sail Mhor in the distance. I lingered for some time on the summit, finishing my flask of coffee and taking several selfies, none of which came out particularly well in the low light.

Loch na h-Uidhe and Beinn Ghobhlach - one last look back before dropping down steeper ground to Little Loch Bloom.

Despite the lack of a red sky at the end of the previous day, this was one of my greatest adventures in the hills:

I had seized the chance during a period of fine weather

A flat and stone-free pitch

Top stuff - sounds like a very similar experience to what I had on Beinn Mhor Coigach a couple of weeks earlier. Nice little hill

malky_c wrote:Top stuff - sounds like a very similar experience to what I had on Beinn Mhor Coigach a couple of weeks earlier. Nice little hill

I think you enjoyed more interesting cloud formations and definitely a better sunset!

You have taken some very creative photographs, especially of some of the rock structures.

I was thinking that Ben Mhor Coigach would make a good high level camp with its grassy plateau.

Your walk report is inspirational and even though I have climbed Beinn Mhor Coigach twice, you've added another thing to my "to-do" list!