I wasn't looking forward to this one. A loner, a straggler, a mere hump it seemed.

It was originally planned as a short early morning "grab and dash" before a swift retreat to a Kate Rusby concert in Glasgow.

Unfortunately, day one of a thirty six hour trip to Strath Carron had been scuppered. Two adjacent estates decided to stalk on either side of the same glen - on the same day: Maol Chean Dearg was out of bounds. Plan B meant that Moruisg was on the agenda earlier than scheduled. At least I'd also have the time to add Sgurr nan Ceannaichean to the day's planned achievements.

According to previous reports Moruisg, or "The Big Water," lived up to its name. A bog-fest thrash to start the day wasn't the most appealing prospect. What was worse, I knew my boots were already coming close to the end of anything that could be remotely described as waterproof. Still, we've got to play the hand of cards we're dealt and hope that persistence has its own rewards.

Down the River Carron

After all the faffing and changing plans it was almost midday before I left the car and began the climb up the bland featureless north west flank of Moruisg.

But, I ended up enjoying a thoroughly satisfying day. 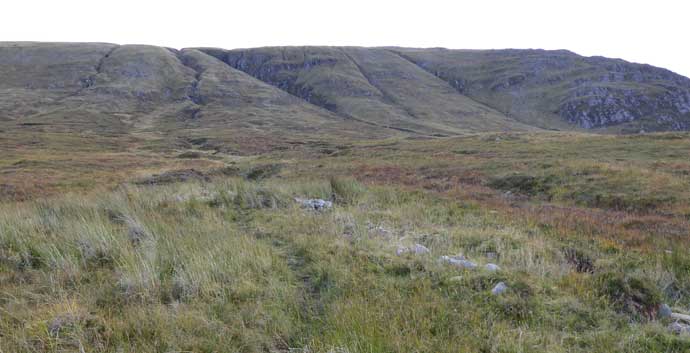 ... to the south west on the other hand

The steady climb was unrelenting but not unduly strenuous. It was just continuous. Gradually more and more of Moruisg revealed itself as I got higher and the angle eased. One thing that made the climb more challenging and time-consuming was the temptation to stop and turn every five minutes, knowing the vast and extensive Torridon skyline was emerging behind me. "Taking it in," whether catching my breath or absorbing the scenery, I just did it.

After an hour and forty minutes following the mantra - small, slow, steady - and getting into an easy rhythm, I reached the top. It hadn't been the most exciting or challenging climb, but every now and again you need something straightforward. Liathach and Beinn Eighe from the summit cairn of Moruisg

Hunkered down in the lee of the sturdy summit cairn I scoffed a late lunch with the horizon revealing everything the various forecasts had promised: blue skies, high patchy clouds and dry. I'd listened to the early morning shipping forecast in the car on the way north, picturing the sea areas and coastal stations. I knew there would be a stiffening wind coming from the east and north east and true to form the wind-chill factor warranted being down-clad and well-wrapped up.

The next hour saw a delightful traverse across to the demoted Munro of Sgurr nan Ceannaichean. There was a slightly stiffer climb up the final few metres where a choice between tops and cairns presented itself. Here, another half hour was spent just wallowing in the views and the lingering warmth of the autumnal sun - provided I was out of the wind. The Cuillin on the skyline

The descent was enjoyably easy. I expected a steep and jarring time heading down the spur of Creag a Chait, but the angle wasn't too bad at all. The ground was largely soft and cushioned, initially following a clear path which I inevitably lost. The resulting awkward teeter over a deer fence, when I couldn't find a gate or stile, meant a wallow through some deep pathless heather and moss before finding the way to cross the Alltan na Feola. Once back on the path, crossing the lower deer fence was a safer proposition: I used the gate. The descent down the Creag a Chait spur

While wandering back to the railway, and the footbridge over the river, rain threatened from gathering clouds over Moruisg. There's nothing worse than that dilemma when you're in sight of the car: waterproofs on or not? Luckily it kept its distance and I got back to the car dry. A final glimpse from the Alltan na Feola

It hadn't been the trip I'd planned. Two Munros over two days turned into a Munro and a Corbett in one, and I still had the following morning to take advantage of. However, after a five hour drive in the morning, an hour's aborted wander up Fionn Abhainn before discovering the stalkers, followed by another six hours on another hill, I just wanted to crash out.

As the sun began setting I was parked up in a secluded lochside lay-by enjoying a late snack and a mug of tea. I ended the day standing in the moonlight, a halo of crystals hanging round a half moon. Snuggled in down against the chill breeze, I listened to the splash and rill of the river running over stones while stags barked and brayed up and down the glen.

Inevitably, I slept-in the next morning. As a result, the wander back south only involved pottering round the Rogie Falls and the surrounding woodlands, before getting back to enjoy the mellifluous tones of Kate Rusby - Yorkshire's finest voice.

Yes, persistence paid off. It just goes to show that when you've got a plan, you know what to change when things go awry.

old danensian wrote:Yes, persistence paid off. It just goes to show that when you've got a plan, you know what to change when things go awry.

Interesting report - we were eyeing these 2 up from Maoile Lunndaidh in the summer - I quite fancy a wander up them from the south, having had a dreicht outing here many, many years ago starting from the A890. Good to see what they really look like

Did these two years ago when they were Both Munros. The North flank of Moruisk was certainly dull and boring - I don't think we had much view - but Ceannaichen was better and I saw my first dotterel near the top which made it all worthwhile

Moruisg isn't the most interesting is it, but Ceannaichean is a lovely hill!!

Not as boring as the look on the map - they have their own charms! We did them in early spring with lots of snow still around, had to use crampons on the steep ascent to Moruisg. It wasn't boring in the slightest!

Stalking can sadly be a problem for hillwalkers. Ruins all plans... We decided not to take holidays in Sept/Oct any more, you just can't plan anything during the week

Don't have any photos from when I did these two so enjoyed seeing yours to jog the old memory cells.