The forecast was for sun most of the day so I had set off early for Dollar and got to the Castle Campbell Car Park around 8:30, first one there too.

20161002.gpx Open full screen  NB: Walkhighlands is not responsible for the accuracy of gpx files in users posts
A sign said the road up from there was in a bad state and for pedestrians only. So after up and down and round the back of the Castle via the well hidden waterfalls it was up a short section of steps and onto the hillside and the track heading up Bank Hill on a glorious sunny morning. 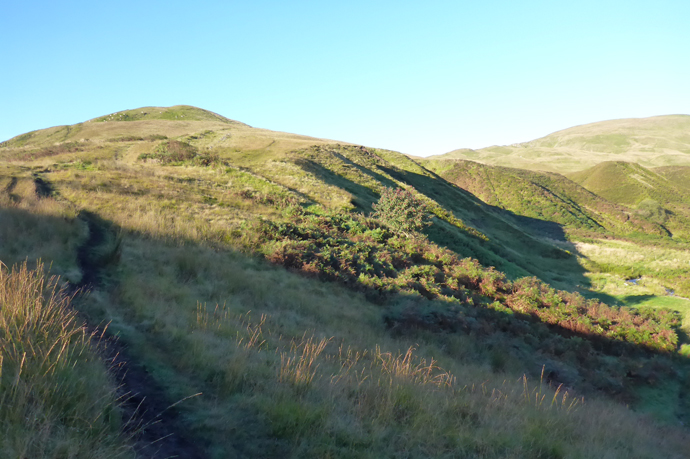 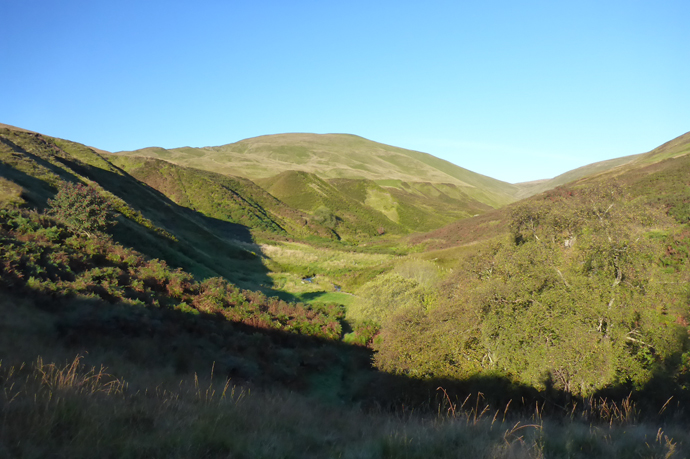 My aim was to get to King’s Seat and also Ben Cleuch, Bank Hill was a good warm up and after its undulations it was time to head up King’s Seat itself.
There was still early morning fog lying in the Forth Valley and there was strong sunshine doing its best to burn off the remaining pools of mist. The blue skies lasted most of the day. 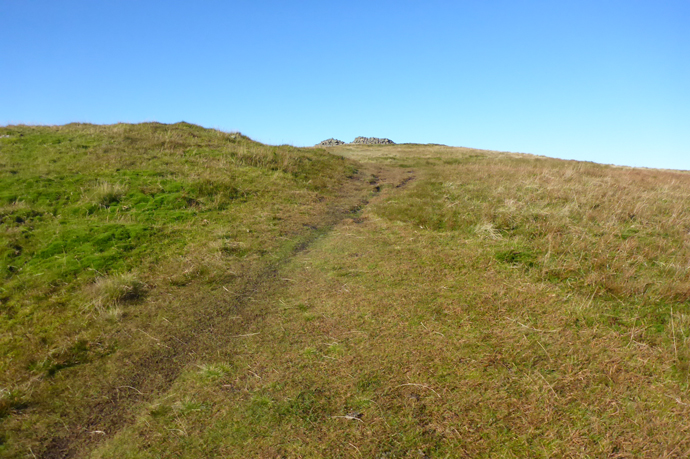 Top of King’s Seat ahead.

Every pause on the way up showed the landscape below in a slightly different light as the sun got higher and the views improved.
The cairn for the 3 Spitfires appeared and then the summit. No one else there, although a few could be seen on their way up.
As always, having got so far it was decision time, Andrew Gannel Hill didn’t look too far off and Ben Cleuch also looked attainable.
And so it proved to be the case, the pool near the top of King’s Seat was still clearly present and hadn’t dried out over the summer. It seemed a fair drop from the summit down the West side of King’s Seat; looking back it was quite a slope, maybe not something to look forward to in a few hours time on the way back. Next stop was Andrew Gannel Hill. 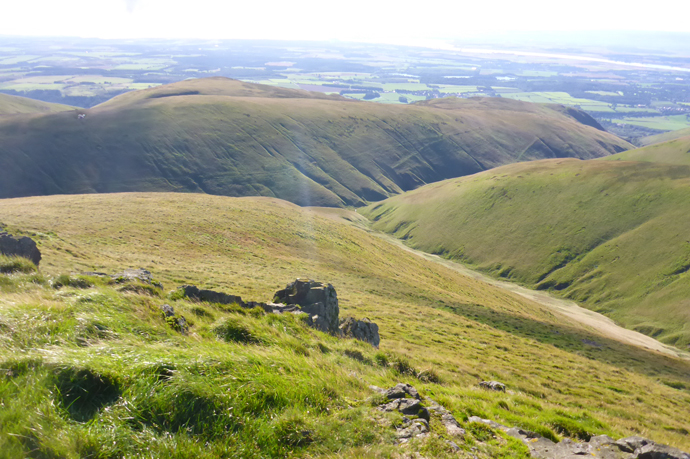 And then on to Ben Cleuch. 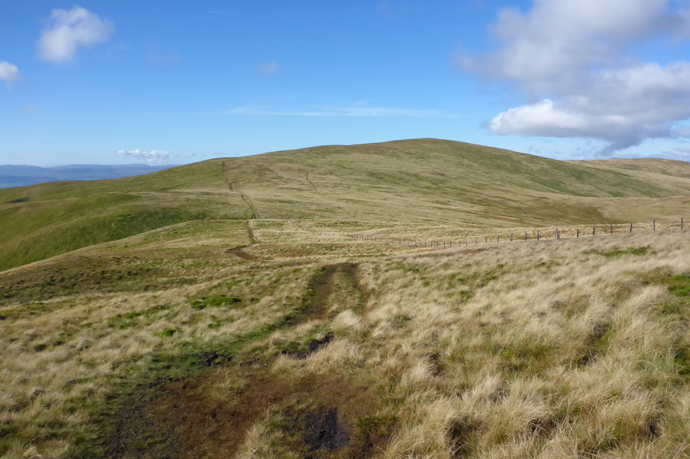 Half way to Ben Cleuch.

Before heading West along the fence line to the junction where one branch line went South.... 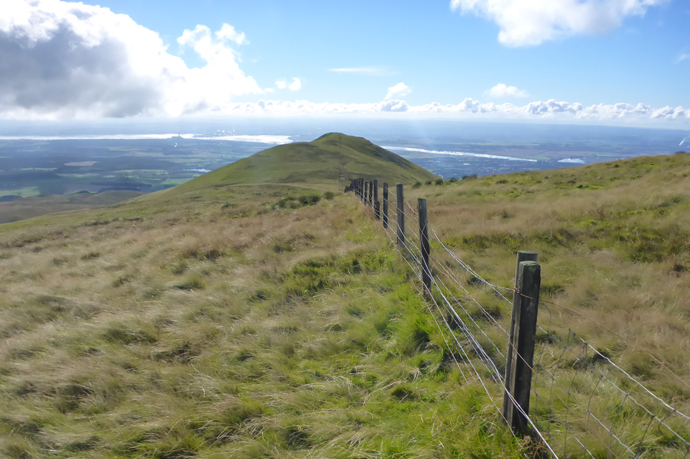 And the other way went... 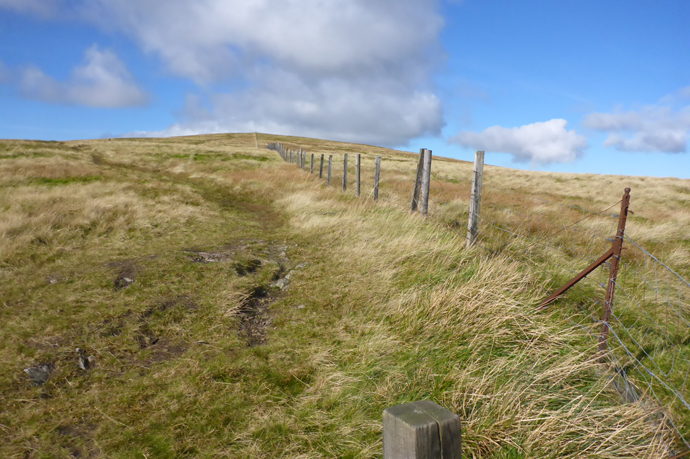 This stretch was gentle rolling moorland and without too much effort I got to the viewpoint marker and the Trig pt. on Ben Cleuch. 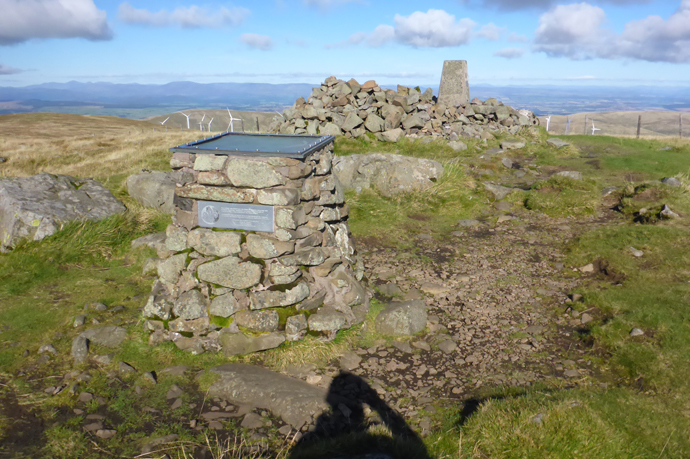 By now it had been getting busier and plenty of friendly walkers and runners passed by in both directions.
It was hard to tell just how far you could see as the horizon was now confused by clouds that looked remarkably mountain shaped, so the distance seen depended partly on your imagination.
Looking back the way I had come and thinking of doing it in reverse was losing its appeal so I thought the walk South to the Law and then descent to Tillicoultry seemed more attractive. The walk to the Law was easy and it had a great view over the valley below.
It was almost impossible not to get into a chat with other people, one couple with many days of hilwalking between them had a dog with them that had done more Monroes than I had. How’s that for keeping one’s boastfulness in check! My legs were aching by now and I paused for a break as they went on ahead.
The route down was through Mill Glen looking more and more interesting. 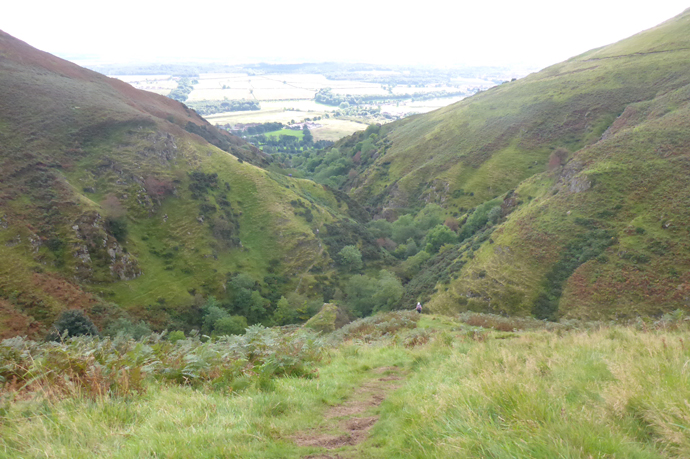 Its been a while since I had to slow down going downhill just to let my muscles recover, usually its the uphill that’s the problem. 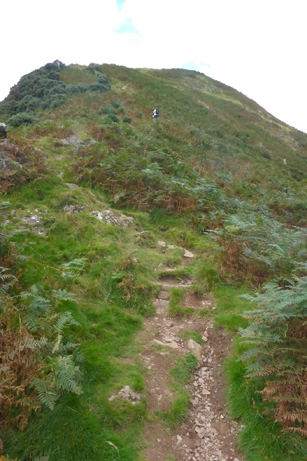 Looking back up during a break.

There was now a steady stream of walkers coming up, and after the scrambling section.....see below..... 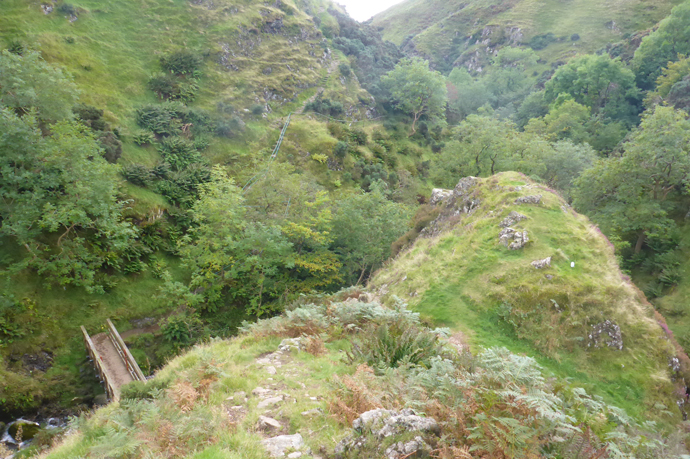 Mill Glen footbridge from above.

I at last got down to the footbridge and had another break before heading along the upper path and the final downhill section to Tillicoultry. Next step was sorting out the return to Dollar, and as there was a small pub, the Woolsack Inn, just at the end of the path I reckoned they would know of a local taxi firm, and indeed they did. The most upsetting part of the day followed next; a couple I had met on the descent were in the pub too, enjoying a cold pint of beer each while I was sitting chatting to them with just a coke as I had to drive home. Ouch!
Almost more painful than the 2-3 days it took my legs to recover from the downhill efforts.

Reaching Ben Cleuch meant I had finished getting to the top of all the hills in Fife & Stirling mentioned on Walk Highlands. A total of 77 miles/123km walking and 15,300ft/4680m of ascent. I reckoned it was quite a good target to achieve after surgery to repair a heart valve in January and starting the walks at the end of April. I will admit to not doing East Lomond this summer as I've climbed it 3 times previously (my game, my rules!).

Overall, one small mission accomplished and a very grateful thanks to those in the NHS who made it possible.

Looks like a good outing. If you have any energy left in the legs and the heart's still get enough oomph at the end, the old railway / cycleway from Tilli to Dollar is a nice way to complete the loop without recourse to the taxi firms. It's only three miles or so on a good surface, and there's a chance of seeing a kingfisher on the stretch where it runs close to the river.

Incidentally, the summit of King's Seat isn't the big double cairn but is at the far end of the ridge (which you crossed anyway); seemingly the NW end is 7m higher than the cairns, although I'm never convinced it's quite as much as that.

RTC wrote:Nice photos and report. Well done on recovering from your operation and managing to do all these hills. The Ochils are great for meeting nice people, even the odd Campbell.

Thanks, I like your turn of phrase about meeting the "odd Campbell"; as if there was any other kind!

Dave Hewitt wrote:.....
Incidentally, the summit of King's Seat isn't the big double cairn but is at the far end of the ridge (which you crossed anyway); seemingly the NW end is 7m higher than the cairns, although I'm never convinced it's quite as much as that.

Just as well I walked over the top, I don't know if I would do it again just for the sake of a few meters in height. It was a gloriously sunny day and well worth the effort even though, like yourself, I didn't add much to the pub trade.

dgcampbell wrote:Just as well I walked over the top, I don't know if I would do it again just for the sake of a few meters in height.

It's a nice hill, though, and merits revisits by different routes and in different conditions. The Kirk Glen route down to the east end of Tilli is very fine and hardly ever used even though it has a path that you can see from a long way off. There are other standard ways to include it in a round, eg the nice Whitewisp-Tarmangie-King's Seat circuit from the same glen you used at the start (or by the "side-door" approach from the back road east of Dollar). Or the Law-Cleuch-Andrew Gannel-King's Seat round starting with your descent route and returning to Tilli by Helen's Muir and the Gannel Glen path (or cutting across to the Kirk Glen route and back through the village at the end).

There's also a good if rather obscure way via a grassy gully that heads up from the Sorrow Glen quite far along - you can angle up to join this near an isolated rowan tree. It adds a bit of interest and pops you out on the ridge not far below the summit but further across from the Spitfire memorial (which isn't actually in the place where they crashed, so I'm told).

It's a good hill generally - but I would say that, having been up it at least once every month since January 2008!