our_route.gpx Open full screen  NB: Walkhighlands is not responsible for the accuracy of gpx files in users posts
Glen Shiel is rapidly becoming my second favourite Glen - if you don't count my mate Glenn - but a lot of the walking in it has a major drawback for a solo walker. Long ridges are great fun and make for splendid days out but always end with needing to return to the start, most often up an unpleasantly busy road and frequently in the dark. The A87 in Glen Shiel is one of the most unpleasantly busy roads I have yet to encounter in the Highlands and the prospect of a 13km walk back up it had always put me off even thinking about the Five Sisters ridge.

However, where there's an idiot there's an idea. Back in April I'd gone for a random wander up Gleann Lichd and looking up at the sisters from that side and studying the map I felt sure I could find a route on the ridge from behind - avoiding the road altogether and turning the walk back into a walk in - which I always prefer as it gets the legs warmed up.

On finding myself camped at Morvich and with good weather forecast for the next day I set an alarm and set off before dawn. I was aware that I was adding an extra 7km or so and 400-odd feet of ascent to a walk that already took 8 - 10 hours, and I was doing it on a day with 10 hours of daylight. But there's no fun in making it easy, is there?

In any case, the walk in up Gleann Lichd is easy and I was walking east, watching tiny tendrils of fire lapping the edges of the peaks in front of me. 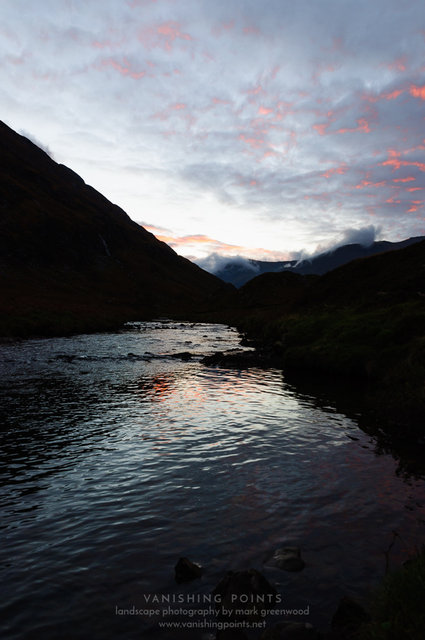 A few days prior, due to a lack of navigation, I'd had a hairy couple of hours on a steep, wet and heathery part of Ben Lawers and after I got down off it I promised myself I'd avoid going off-piste on steep, wet, heathery hillsides for a while.
Upon reaching Glenlicht house I turned off the path and headed up. My plan was to avoid the steep and craggy headwall leading up to Bealach an Lapan - the usual point of access to the ridge from the "front" - and instead bypass Beinn Odhar completely and gain the ridge at the bealach before Sgurr na Spainteach. And so it was that I spent at least two hours, toiling, sweating, and slogging unhappily up a very steep, wet, and heathery hillside. I did not enjoy it one bit. I thought several times about giving up, I thought about how this was taking way longer than I'd thought it would and it would be dark before I got down. But mainly I thought that this must be the worst part and if it ever ended, the rewards would be worth it.

From the campsite to the top of Sgurr nan Spainteach took me 4 long, gruelling hours during which I was not even excited by the sight of a stag only a few yards from me, during which I cursed the existence of heather and berated the world for having gradients. During a breather - one of many - I took a photo looking back towards Glen Affric. It was this view (it was the only one I had) and promise it showed which kept me going. There are occasions in life when an instant of sheer joy makes us forget ourselves. In these unguarded moments the eloquence and emotional depth of our exclamations are posterity's record of a moment that was unique to ourselves and never to be repeated. Upon finally cresting the ridge and being rewarded with the most jaw-droppingly sublime view I may ever have seen, posterity will record that I, in sheer unguarded joy, shouted "Bugger my socks off". Posterity be damned Panorama of the ridge ahead

Ordinarily on a walk I will point the camera at everything I can see and expect to get a few keepers when I get home. But for about the next 2 hours anywhere I pointed the camera resulted in a decent photo. They were practically taking themselves. The air was incredibly clear, the light amazing. I stumbled along in a bit of daze snapping away merrily so I can't quite honestly tell you exactly where all these shots are but I'm pretty sure I crossed 2 Munros in the course of taking them. A raven pays a visit Along Coire Domhain towards Affric Past Sgurr Fhuaran towards the rest of the ridge

I do remember the walk up Sgurr Fhuaran - third Munro of the day - quite well, partly because at the bottom of it I met the only other people I saw all day - a couple doing the ridge in the other direction who had left bikes at the top end so they could cycle downhill back to the car. At the time this seemed like a much better idea than what I'd done, if only because going west-east would mean most of the scrambling would be upwards. I also remember Sgurr Fhuaran because it was steep and my legs were going wobbly. Who decided to put the highest peak at this end of the ridge? 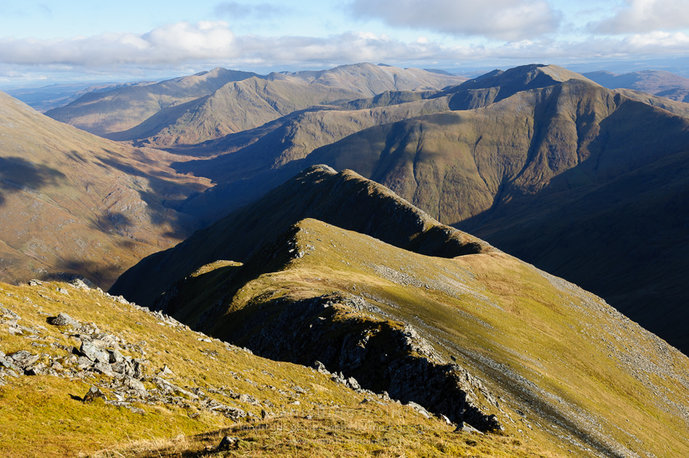 Sgurr Fhuaran's east ridge, that I had walked around to get up onto the main ridge. 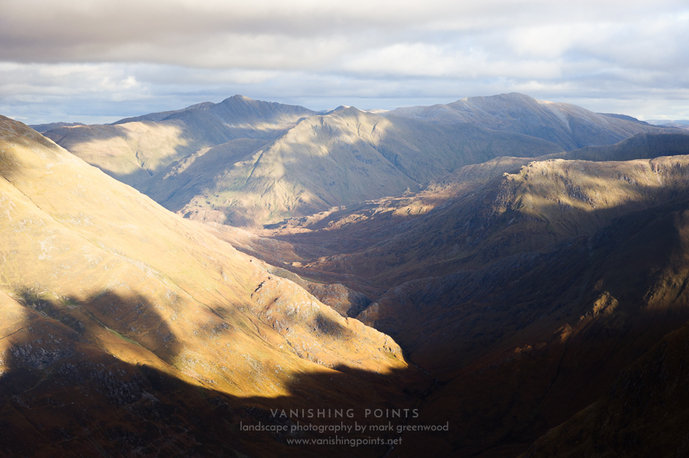 And finally on to Beinn Bhuidhe where I quickly made the decision that my legs were not going to make it to the top of the fifth sister - Sgurr na Moraich. So instead I sat for a while and contemplated the view. 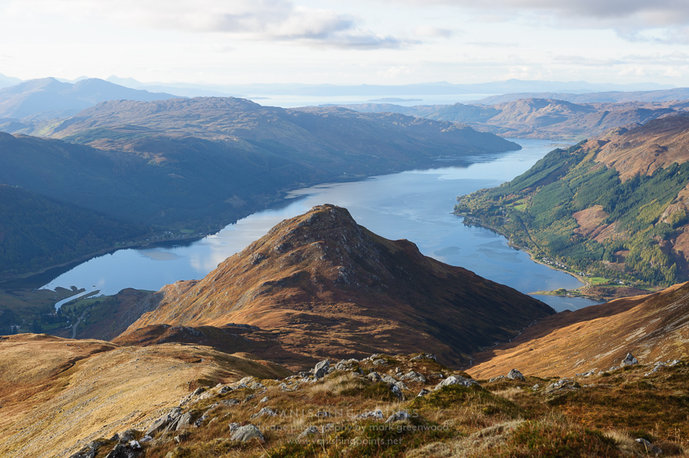 From Beinn Bhuide over Loch Duich

There's a path on the Harvey's map leading off the nose of Beinn Bhuidhe, off down the right flank of the peak in front of you and meeting up with the really well made path that runs down above the gorge of the Allt a'Chruinn. It felt like a very long way indeed and I finally arrived back the campsite in the dark, 11 hours after I had set out. But what a day, definitely one that will live long in the memory.

Good route - did think about that myself in the past. And great pictures

Beautiful, it has been a brilliant few days in Kintail, we were on neighbouring hills Saturday and Sunday in similar conditions. Well done on completing the circuit, can't make my mind up about a linear route or this one, but that's next year's decision

Thanks for the inspiration

Yeah, I remember taking that option for these hills. Certianly different to the standard approach and the time to the first summit certainly does take some time to achieve. Well done though.......a good effort for this time of the year

Enjoyed your report and beautiful photos. We went this way in June but went up through the Coire which was pleasant and none too steep. I know what you mean about the final summit, we were exhausted and dehydrated.

Well done Bob, on both the absolutely superb photos and on finding a successful method of avoiding the miserable trudge up Bealach an Lapain

Another fabulous day - weather still just about holding out

. This is the route I took with my dad years ago - seemed like a no-brainer to avoid the road. Weather wasn't that great then though.

always nice to do a different route as well!

Thanks all. What a day it was.

Cairngorm creeper wrote:Enjoyed your report and beautiful photos. We went this way in June but went up through the Coire which was pleasant and none too steep. I know what you mean about the final summit, we were exhausted and dehydrated.

I think you must have a different definition of "steep"

My route didn't go too far from the route up into the coire, and I thought it was way too steep

I've actually just bought a new guidebook (on a whim) that actually suggests the route up into the coire the way you probably went as the best way to do them.

jupe1407 wrote:Well done Bob, on both the absolutely superb photos and on finding a successful method of avoiding the miserable trudge up Bealach an Lapain

The photos pretty much took themselves but cheers