My second visit to the Cruachan massif, but this time a wonderful circuit and ridge walk from the E, spotted by jackfrost.

The BBC forecast had promised beautiful sunshine for Oban, but as we drove westward along the A85, the dark clouds and showers took an agonisingly long time to disappear. Eventually as we approached Dalmally, we could see our hills ahead, just the tops in cloud. Through the morning, the cloud level bounced up and down around the 850m mark, but luckily for us, rose as we climbed, so we had views for most of our climb. But a lesson for me—Oban weather is not the same as Dalmally weather. The cold east wind meant plenty of layers were needed 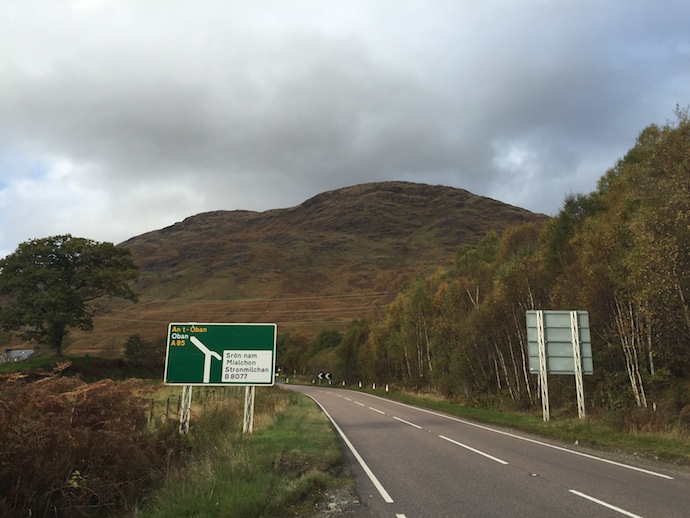 The start of the route, and the first ascent ahead

We parked in a layby on the A85, just E of the B8077 junction, and headed off up the track that leads NW. After crossing a gate, we struck SW to start the steep climb up the long E ridge of Beinn a'Bhuiridh. Progress up steep noses like this always seems to me to be quicker than expected, and it wasn't long before the gradient eased and we could detour to the trig point of Monadh Drisieg, high above Loch Awe. 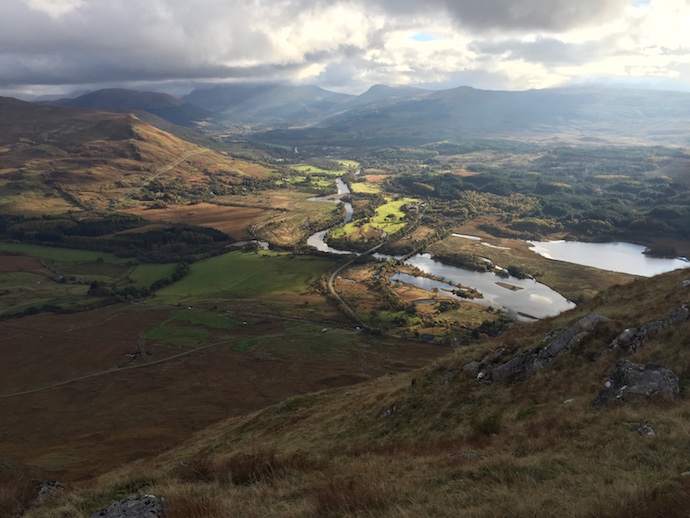 Looking E from the first ascent, back to Dalmally 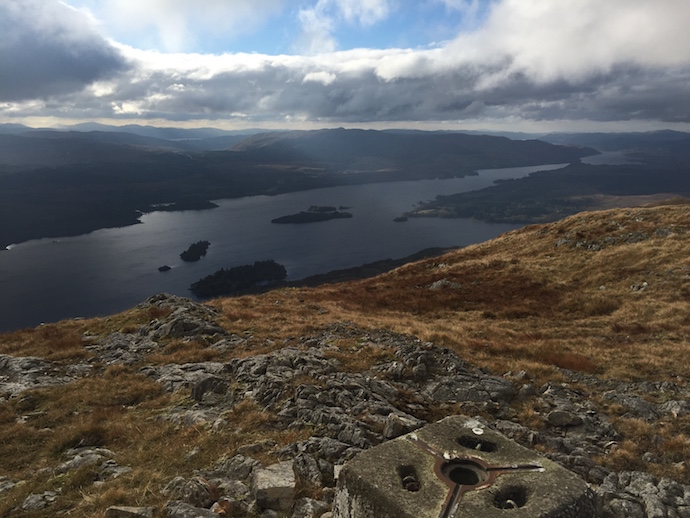 Continuing up the ridge, we kept to the north side, skirting an interesting looking notch as the slope steepened, and eventually reached the E top. 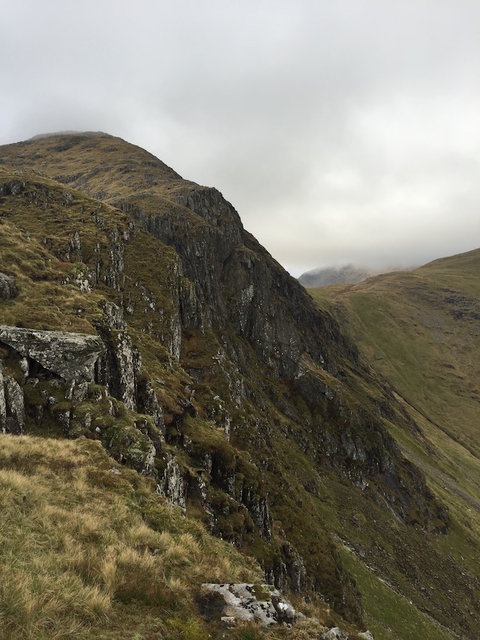 Getting steeper again as we climb W

This was briefly in cloud, but that soon rose as we made our way along to Beinn a'Bhuiridh's flat, rocky top. Because it's so flat, the views aren't as good as you'd expect, but we could now see W towards Oban and beyond, with Mull and Scarba especially prominent. 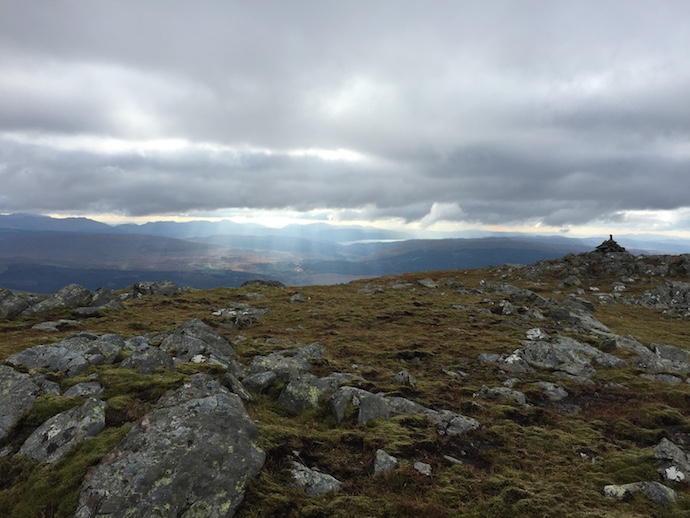 The next stage of the walk was always going to be the trickiest, launching into the really steep descent N. This meant careful zig-zagging through boulderfields and occasional patches of scree, and for the first time I wished I had walking poles to help me, as jackfrost disappeared with his into the distance. We soon made it to the col, though I wouldn't have fancied the descent in wet or icy conditions.

A wee spot of lunch above the col, and then we began the climb up the E side of the main Cruachan horseshoe. I did this over 25 years ago, but while I was sure we did it anti-clockwise, I couldn't remember whether we'd come up this ridge or headed more directly towards the N ridge from the reservoir track. Whatever, today we were very much the odd ones out as it seemed everyone else was doing the ridge clockwise 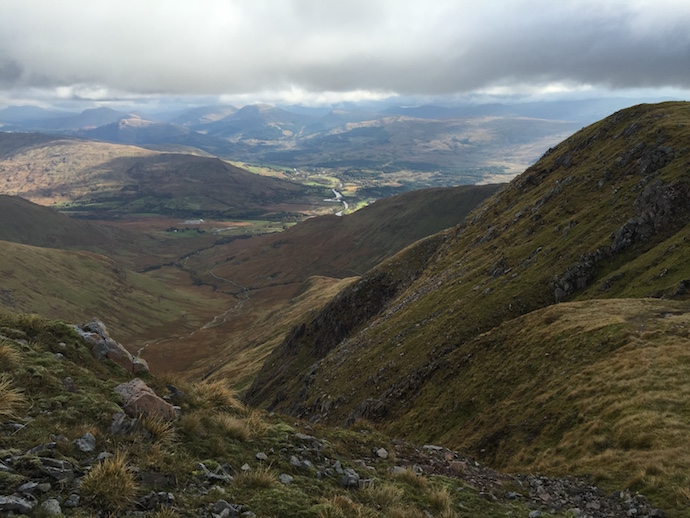 Another view E, from the Stob Garbh ridge 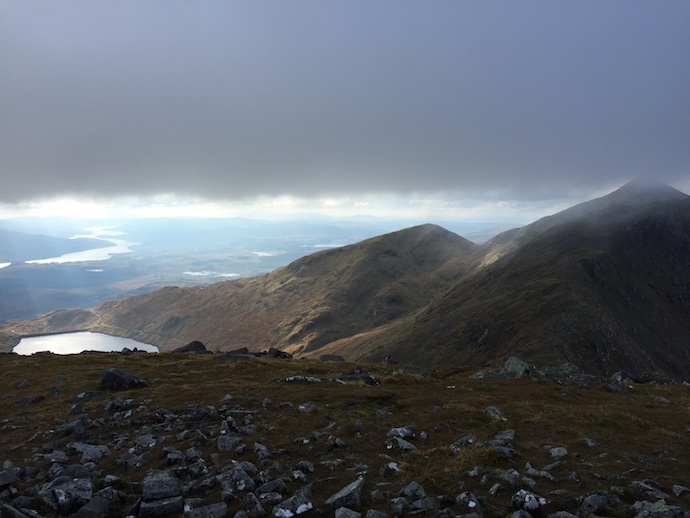 Over Stob Garbh with fantastic views back down towards Dalmally, and we were soon on the top of Stob Diamh, marvelling at the mountains around us and the distant views to Morvern, Ardgour and the Rum Cuillin beyond. The tops of Cruachan and Stob Dearg (the Taynuilt Peak) appeared and disappeared several times, while Ben Trilleachan and its shy Sub 2k neighbour also looked tempting across Loch Etive. Eastwards, the weather was much more unsettled, and Ben Lui stayed in the cloud most of the day. 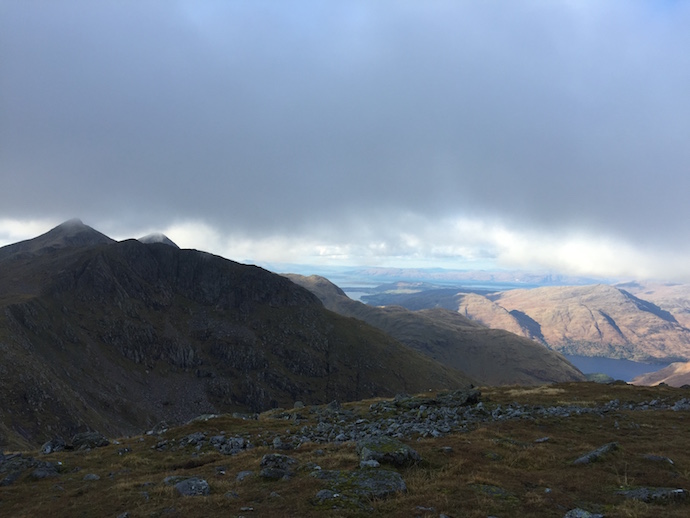 Ben Cruachan, the Taynuilt Peak and the wild west beyond 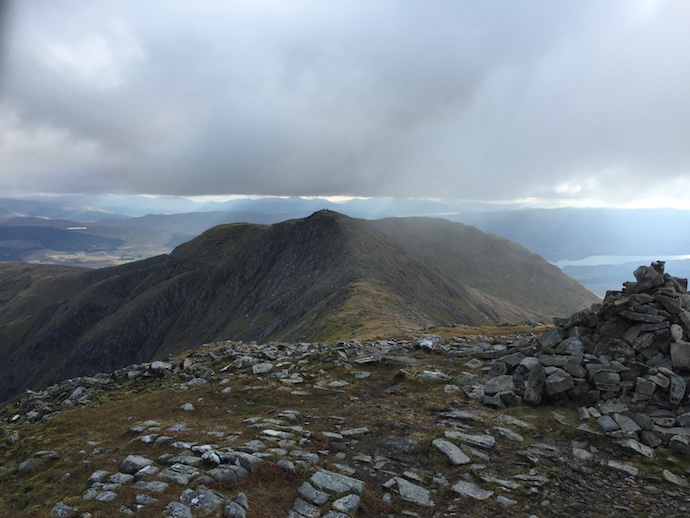 The route home took us to the easternmost top of the Cruachan ridge, Sron an Isean, and then down a wonderful grassy ridge to about the 450m contour, where we decided to slant SW to cross the burn just beside a new-looking dam. From here, there was a track back down the hill, keeping to the south of the Allt Coire Chreachain, and rejoining our outward route.

My second visit to this range, and it was even better than the first

I may have briefly spoken to you about our walk, about ow steep the Corbett was?

teaandpies wrote:I may have briefly spoken to you about our walk, about ow steep the Corbett was?

I hope we didn't exaggerate! It's as steep as any descent I can remember making…

teaandpies wrote:I may have briefly spoken to you about our walk, about ow steep the Corbett was?

I hope we didn't exaggerate! It's as steep as any descent I can remember making…

You didn't, I was pretty tired y the time we got there and part wY up I was ready to give up but my pal convinced me to keep going. A bit of a thigh burner

Great report of a grand day out. Next time I think I'd try to keep on the ridge of Sron an Isean for longer, dropping off the ridge in an ESE direction after the 450m contour - would have made a cleaner route on the map. Here's the view down the ridge of Sron an Isean