Beda Fell.gpx Open full screen  NB: Walkhighlands is not responsible for the accuracy of gpx files in users posts

First day in the Lakes, and we are all a little unsure of what we are going to be capable of this week - so a nice gentle one to start us off. 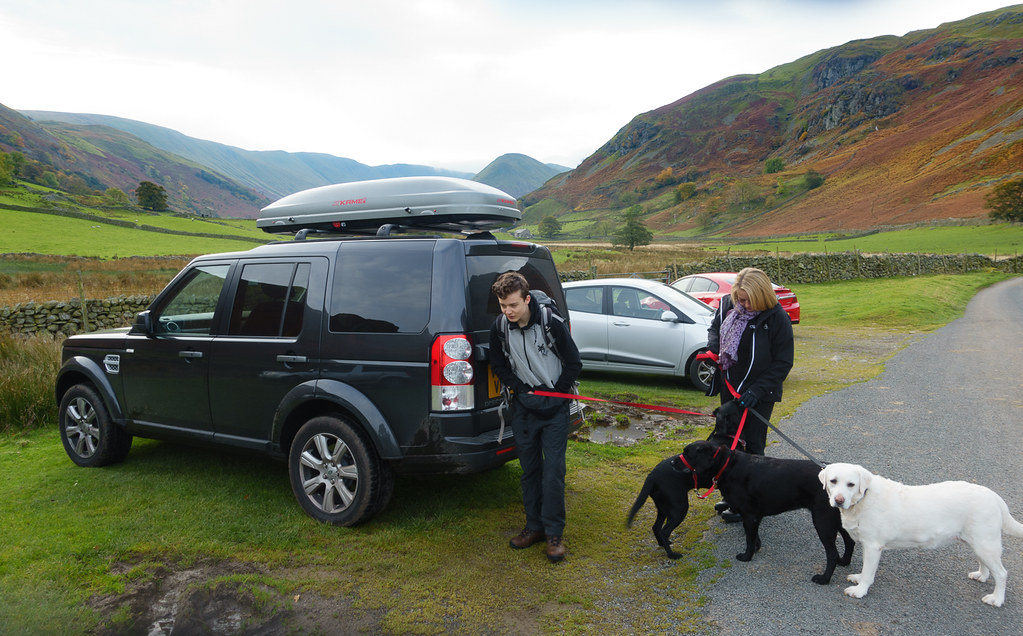 We drove round to Howtown (we are staying near Pooley Bridge so it's not such a trek as it usually might be) and parked on the open ground near Winter Crag Farm. After a short false-start down the bridlepath to Sandwick, and falling in a hole in the path (nothing hurt except my dignity, fortunately) we set of up the path to the Winter Crag ridge. 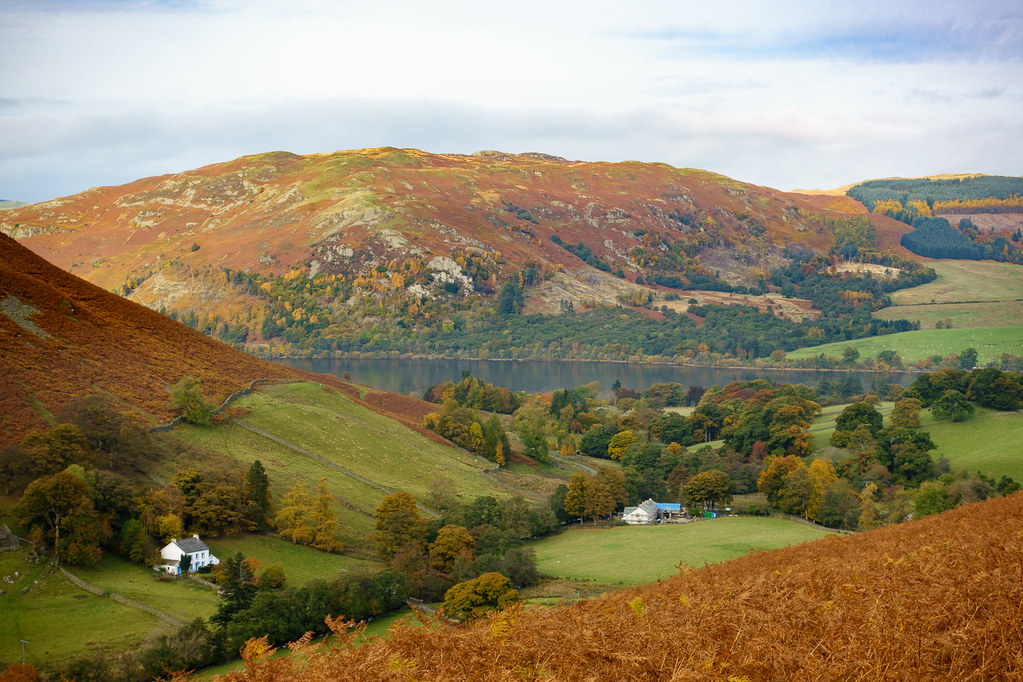 When we reached the ridge there was a seat and a nice viewpoint over Ullswater. 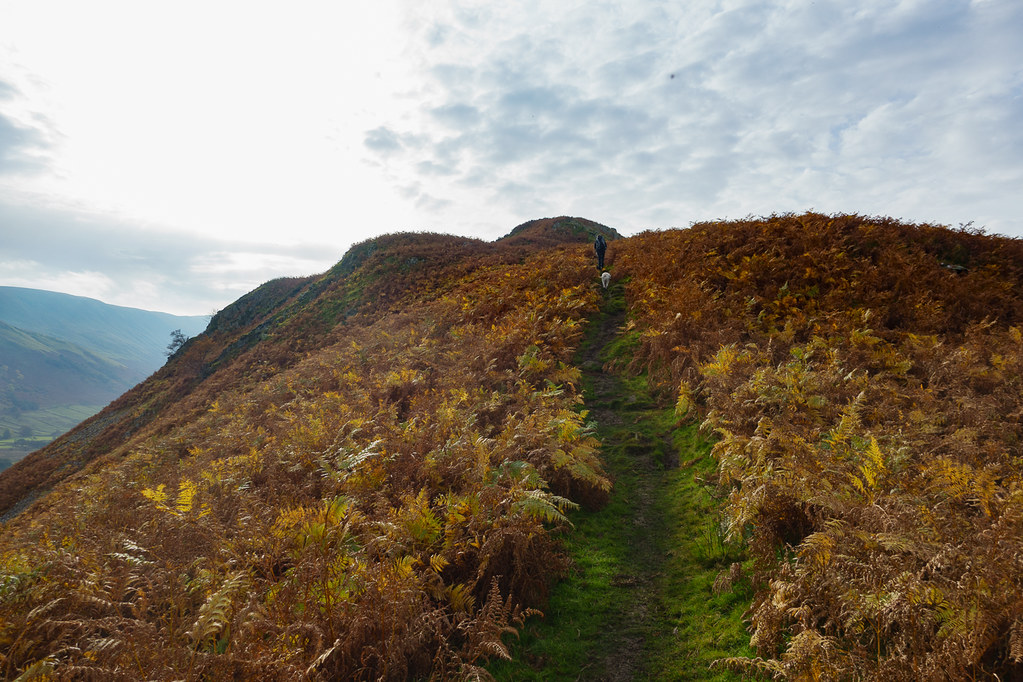 The path up Winter Crag was enjoyable - gentle gradients and nice views. 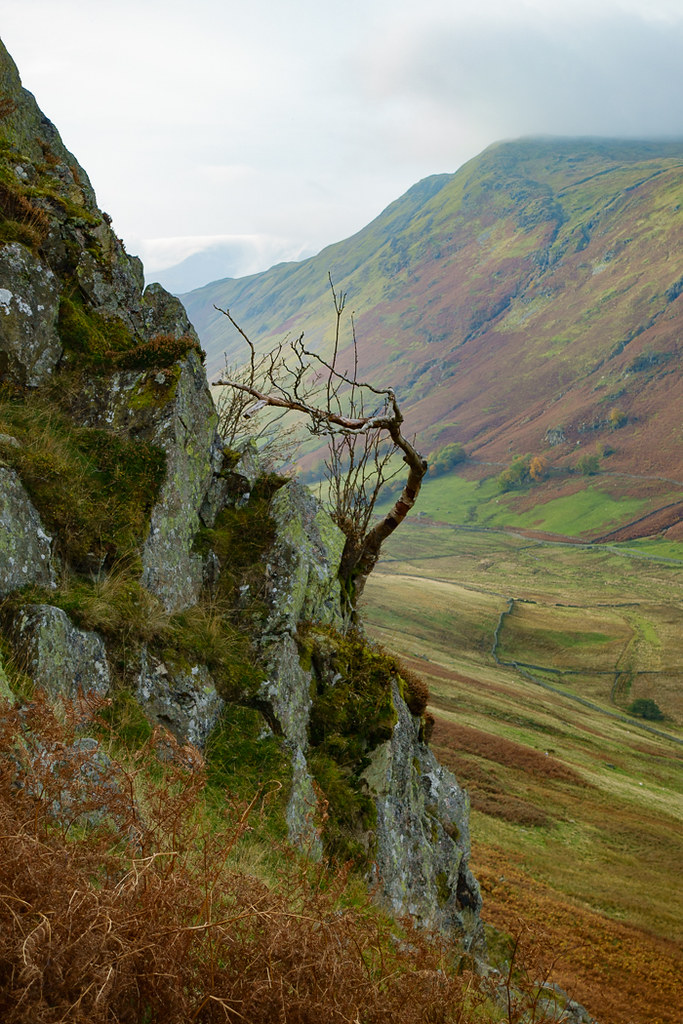 Every time we turned round to look where we had come from, we got views of Hallin Fell to the north. 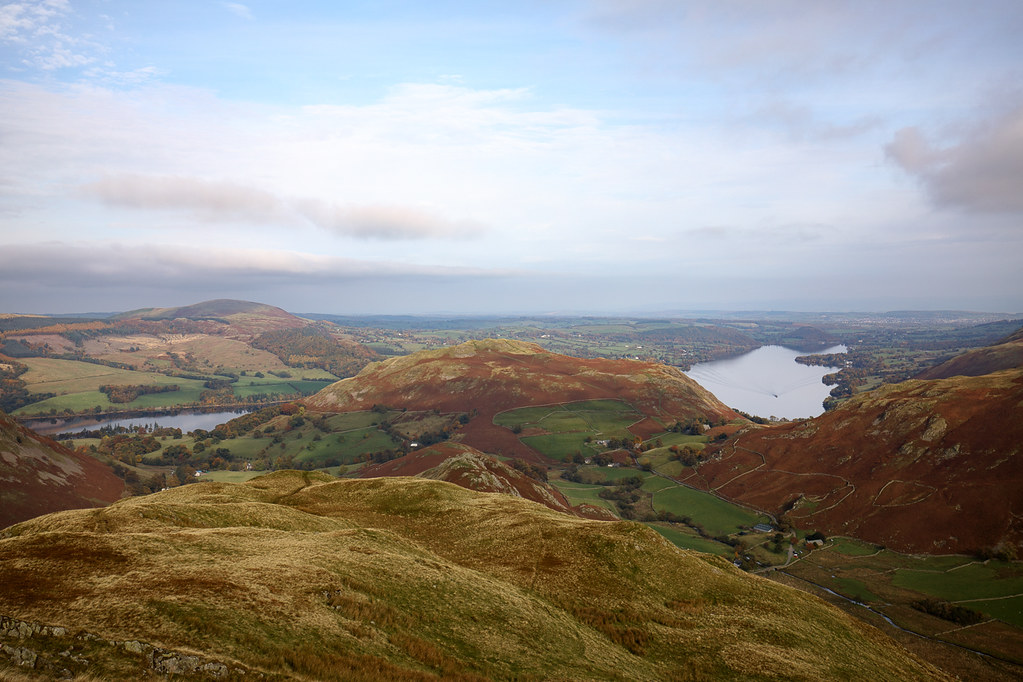 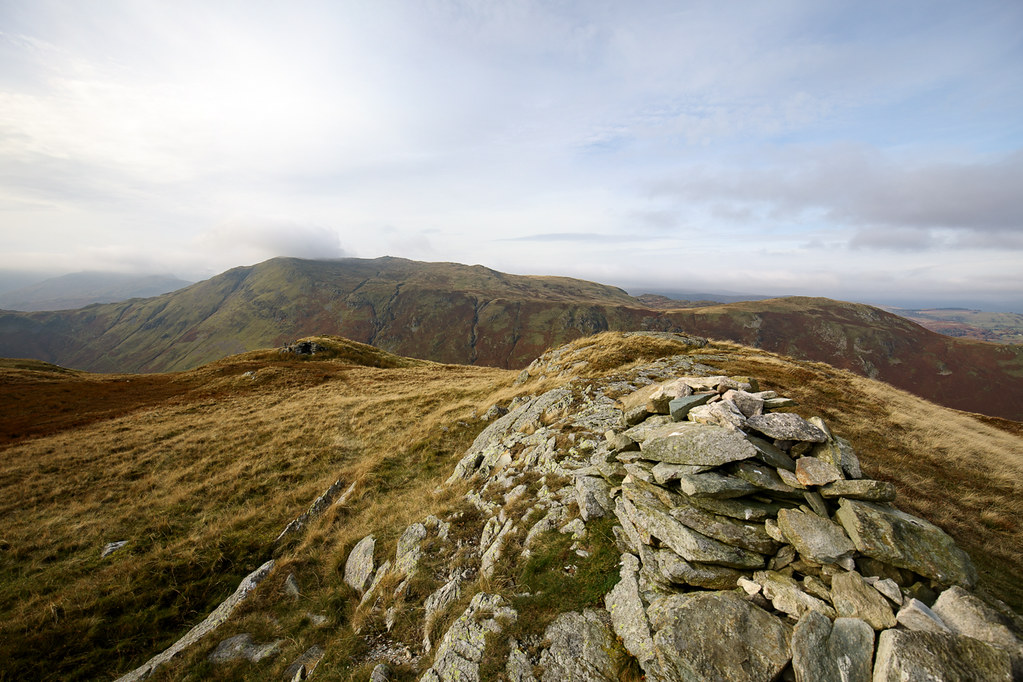 To the west, looking across Boredale, was Place Fell. 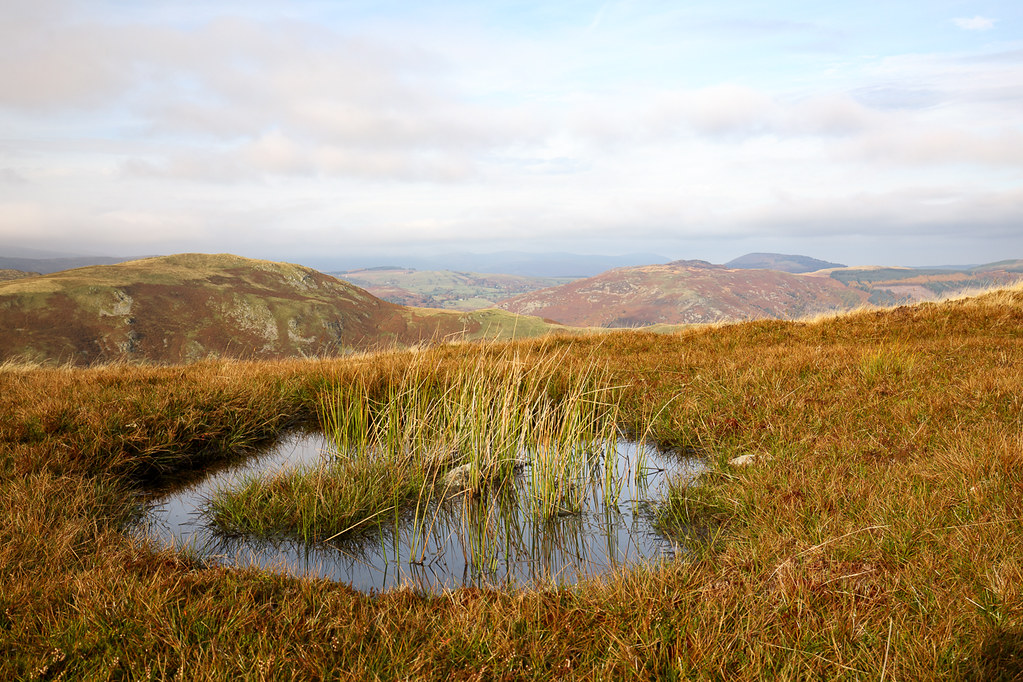 The first cairn you reach near the summit is near an interesting-looking shelter (from a distance it looks like the entrance to a cave or burial mound, but at the back of the "doorway" is solid rock), and a tiny picturesque tarn. 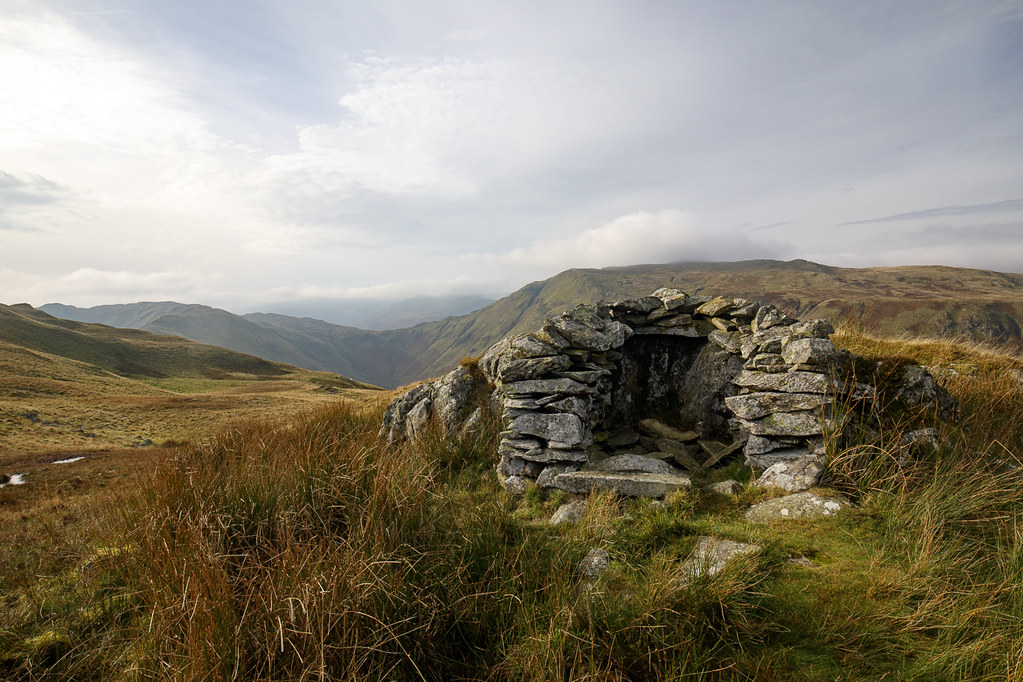 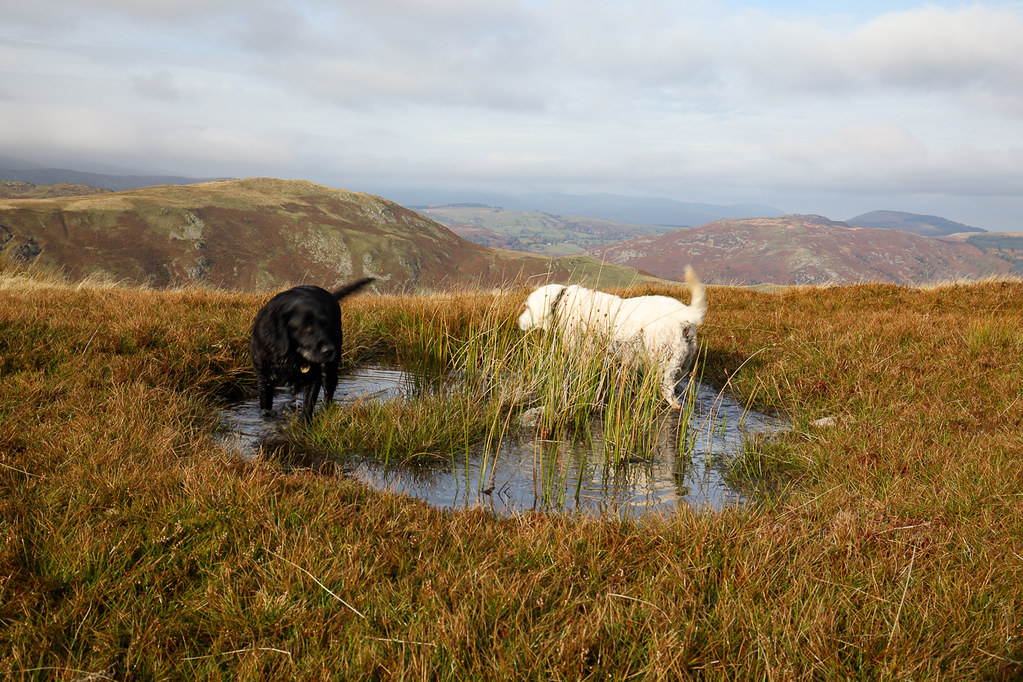 The dogs seemed to enjoy playing roundabouts in the tarn. 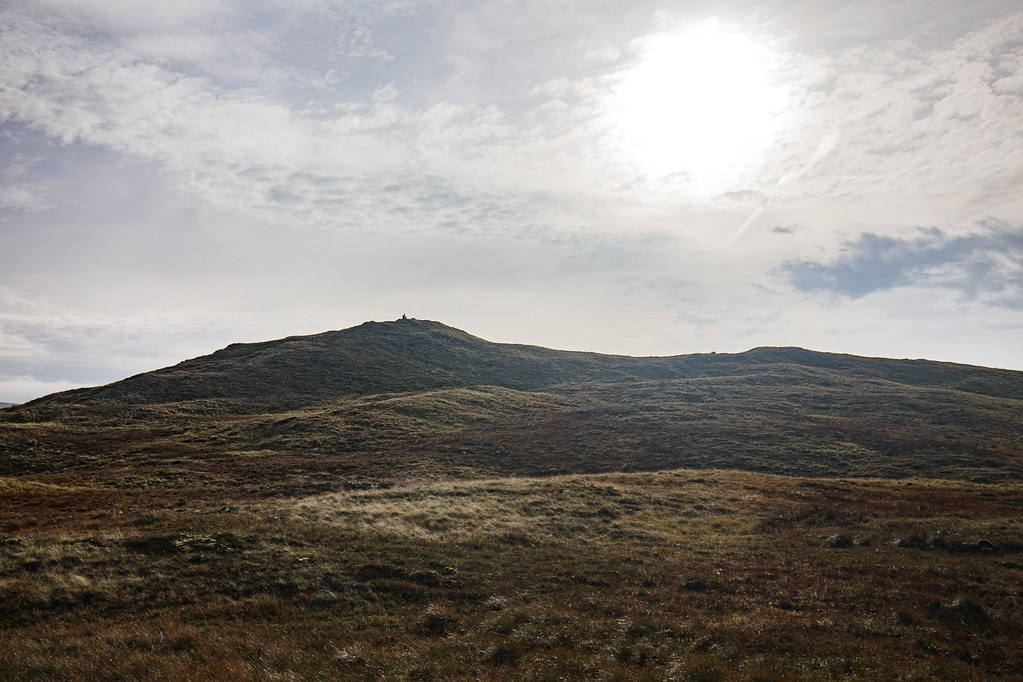 Figure on the skyline

Looking towards the summit a figure was silhouetted at the cairn. Didn't come out so well in the photo though. 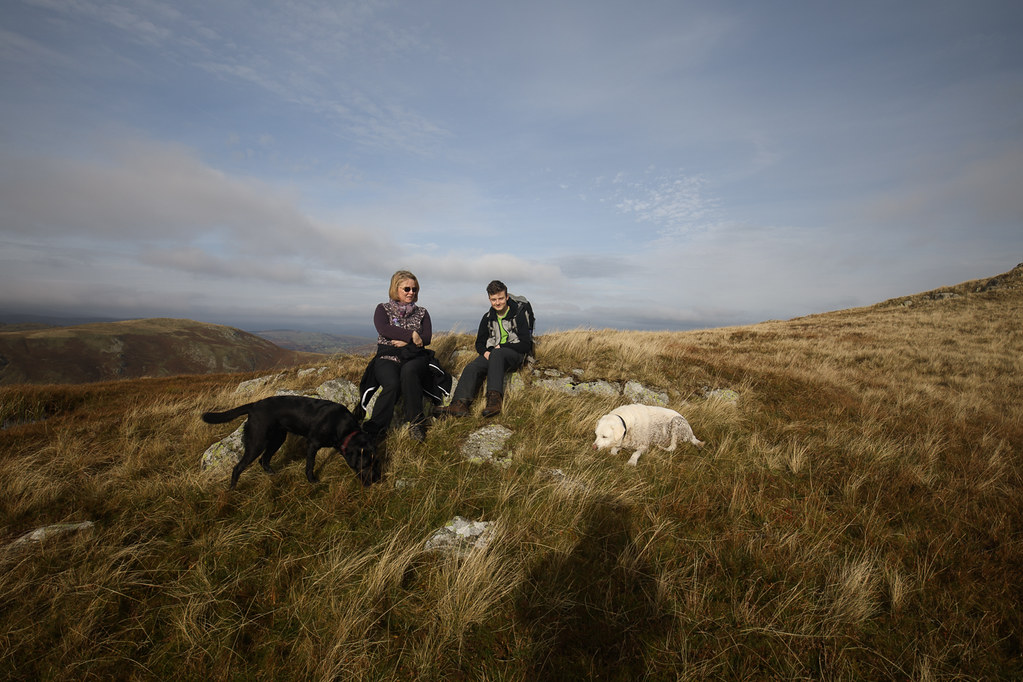 On top of Beda Fell

Having hardly seen a soul up until this point, suddenly there were half a dozen or so at the summit, but they soon dispersed and we had the top to ourselves. 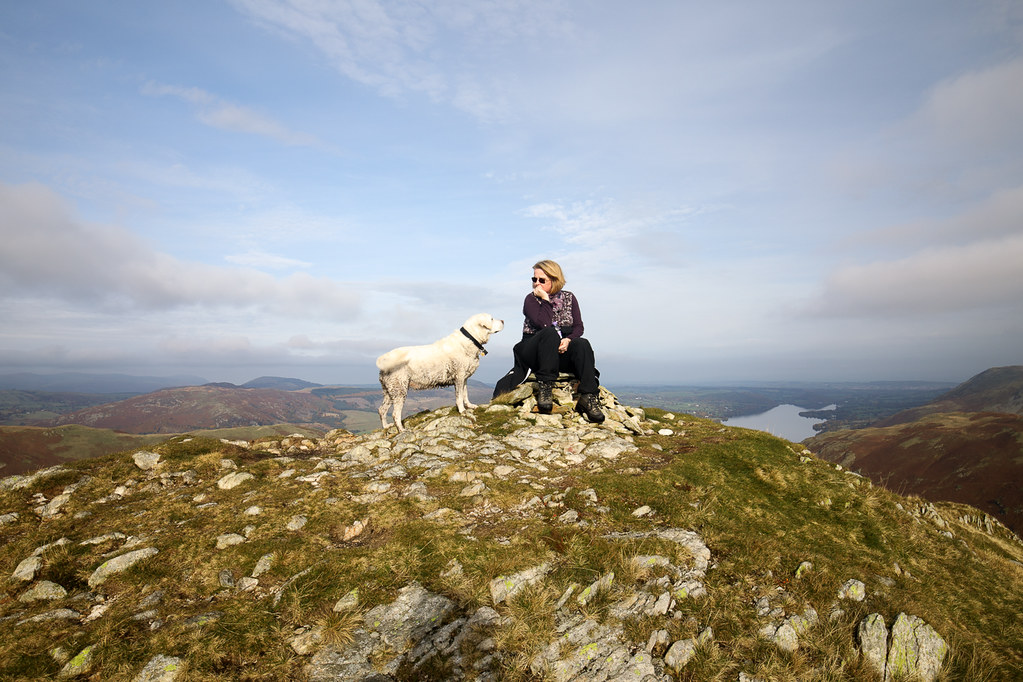 One Woman and her Dog 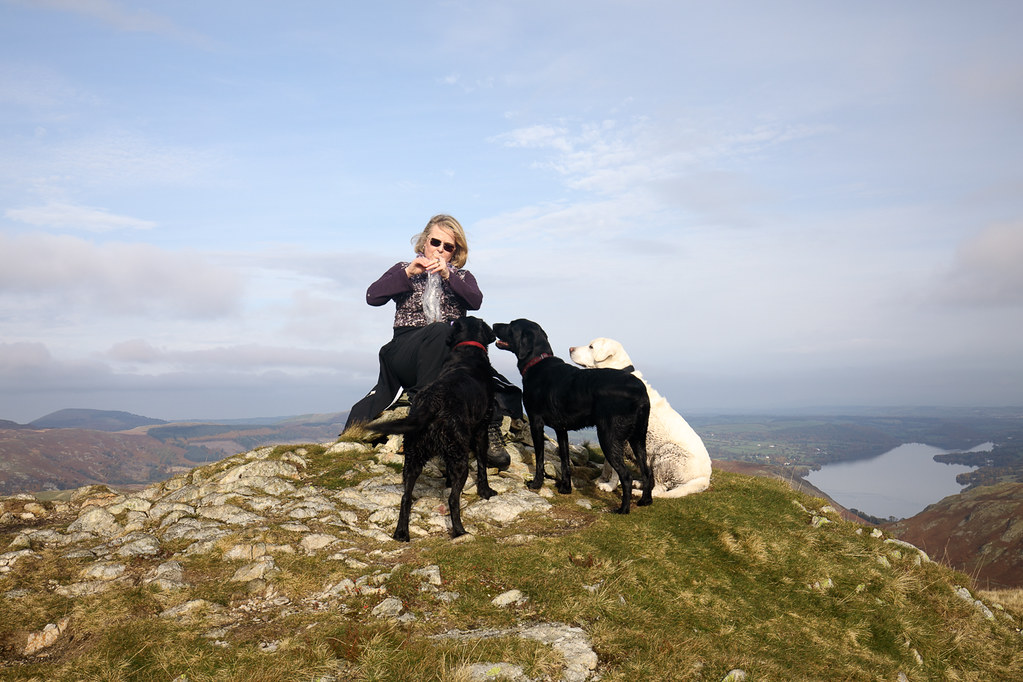 Top of the Mountain treats

The dogs know the deal - when we get to a summit they get a biscuit. 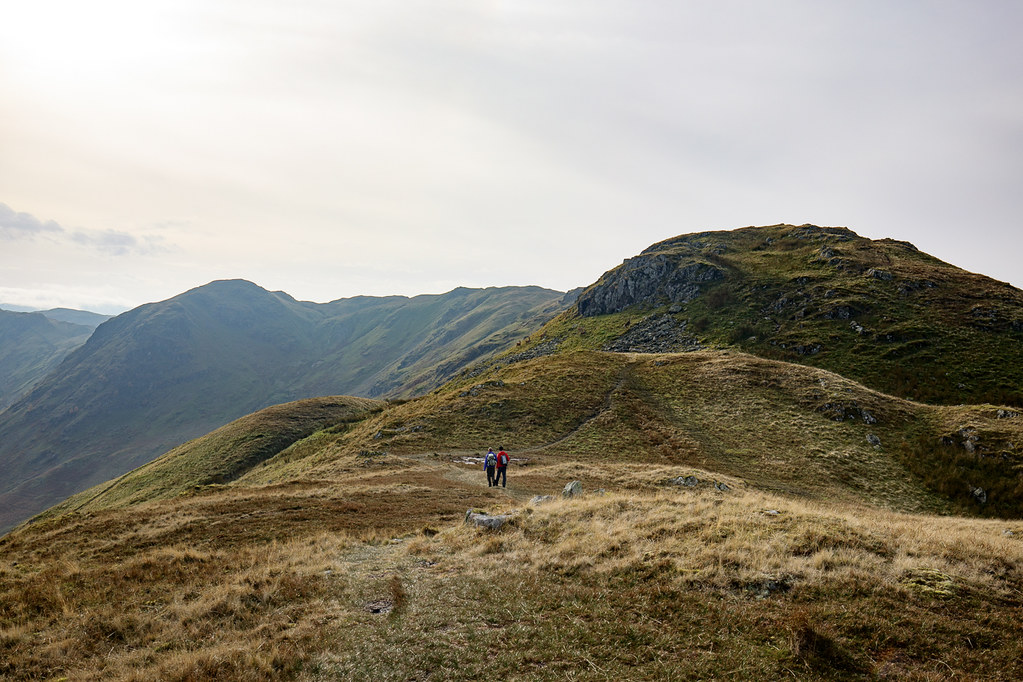 We decided that rather than head back the way we had come we would carry on down the ridge and take the path from Patterdale down to Martindale. As we approached Bedafell Knott and the turning, a group of six Red deer crossed the path ahead of us (you can barely make them out in the photo - I only had a wide angle lens...). Great to watch them leaping down the hillside. 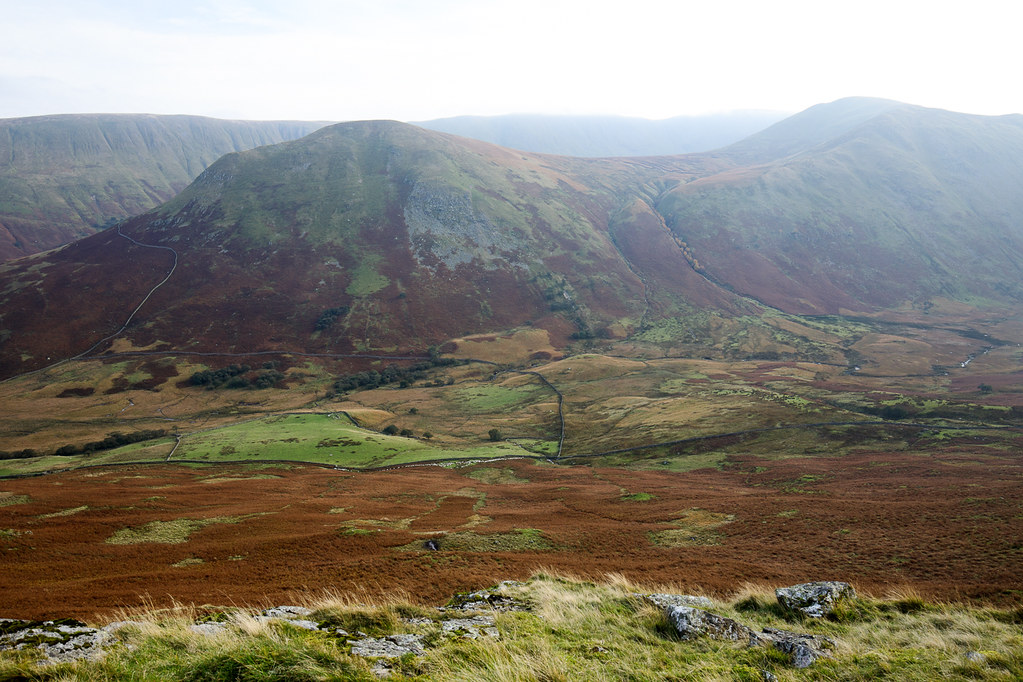 Sheep and Deer in the valley

We cut across to the Patterdale-Martindale path, and found various groups of walkers standing watching events in the valley below. At first we thought it was the sheep herding that was catching everyone's interest (and it was fun to watch) but then we noticed there was also a very large - 50 or more - herd of deer moving down the valley too. Again, you can't really see them in the photos without a magnifying glass, but it was a lovely sight. 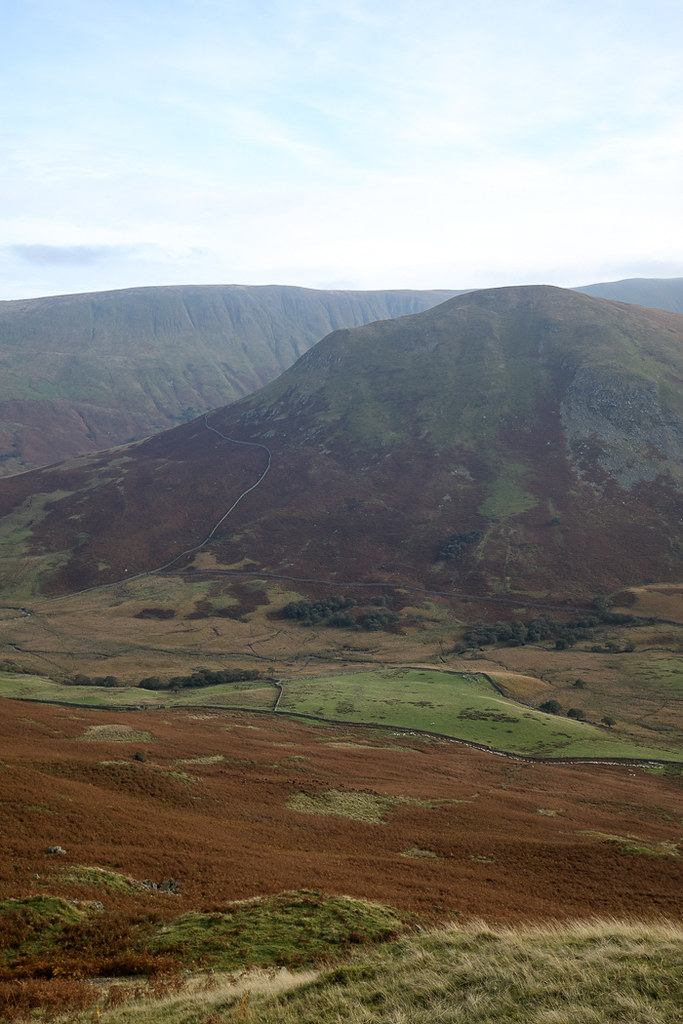 Sheep and Deer in the Valley 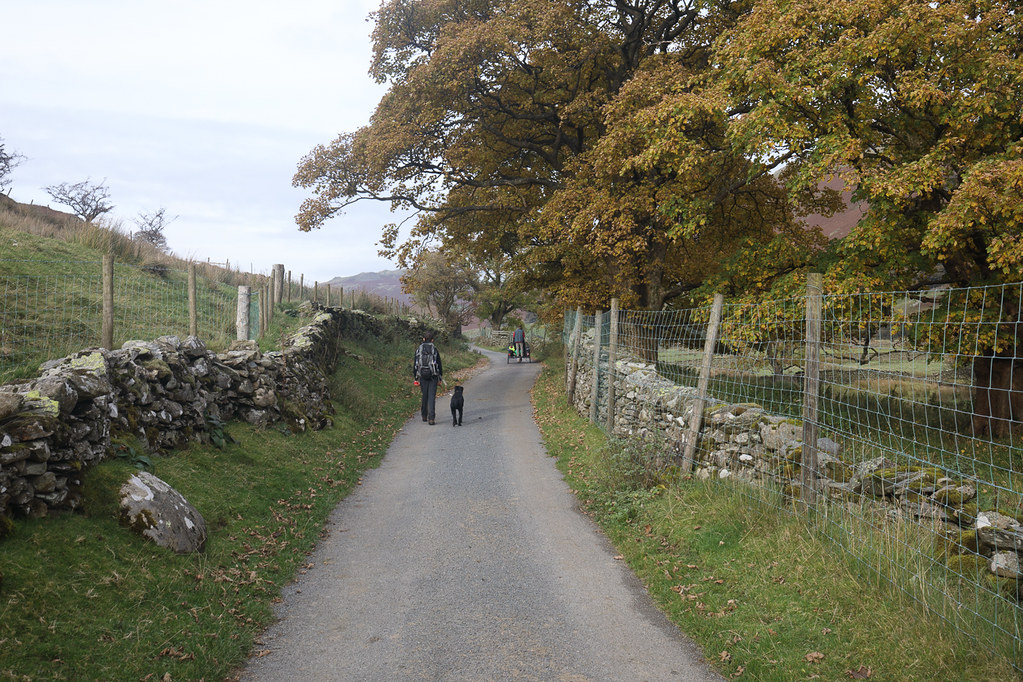 The path reached the road at Dale Head farm - from there it was another mile up the road to where we had left the car. 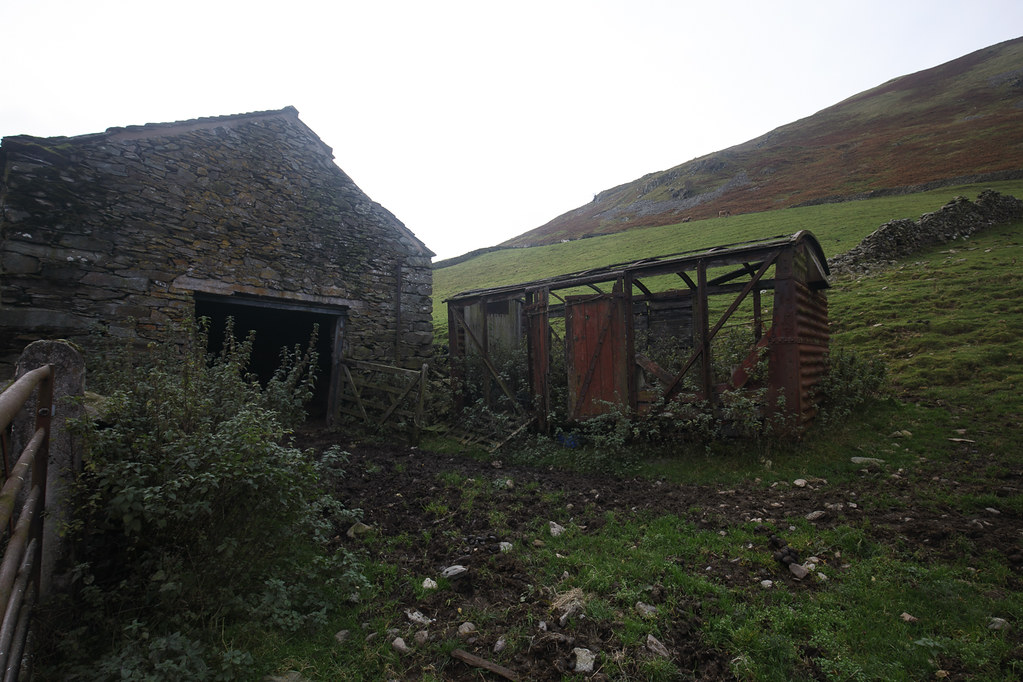 This looked like an old railway wagon to me, but it's a long way from a railway if so! 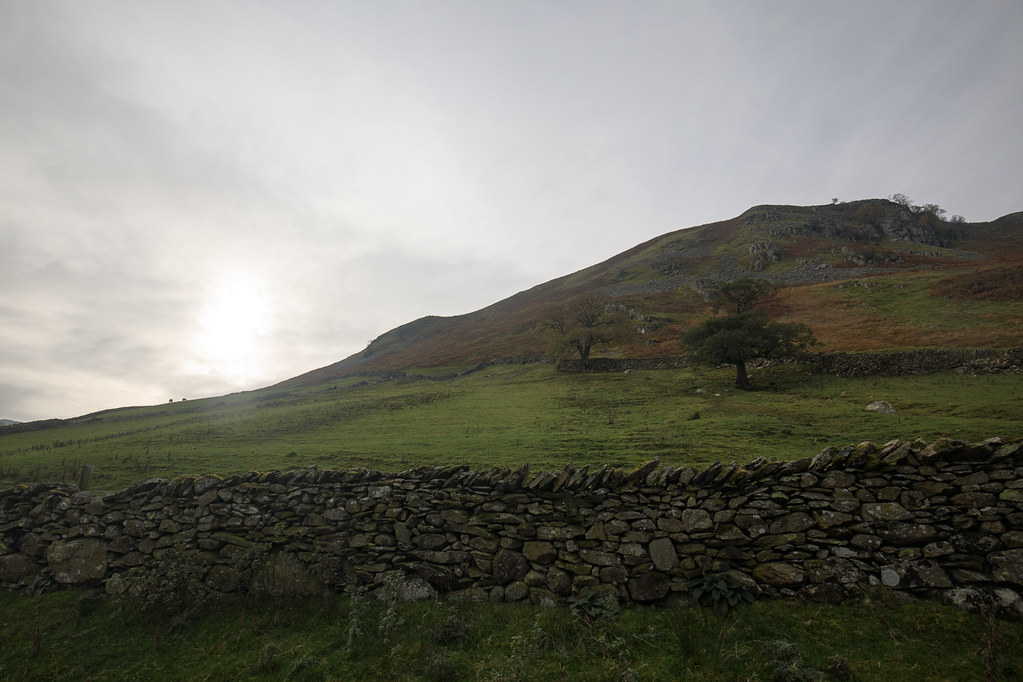 Horses on the skyline

There were deer on the skyline too, but too small in the frame for photos. Maybe I'll take a longer lens next time... 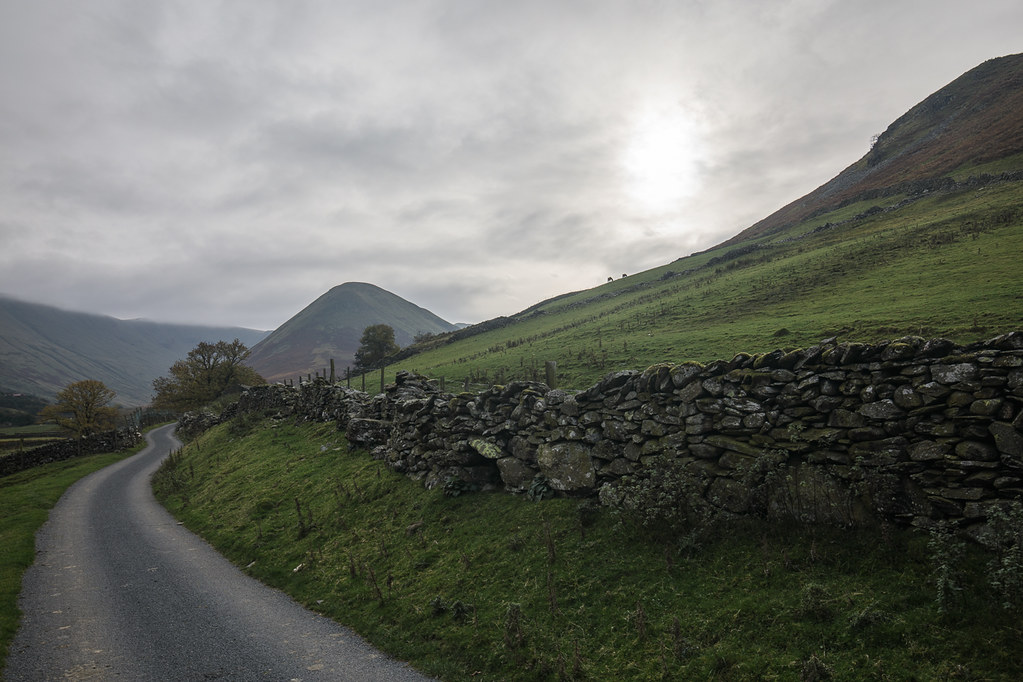 Looking back at The Nab - a likely target for sometime later this week, though will probably choose a day when the dogs are resting... 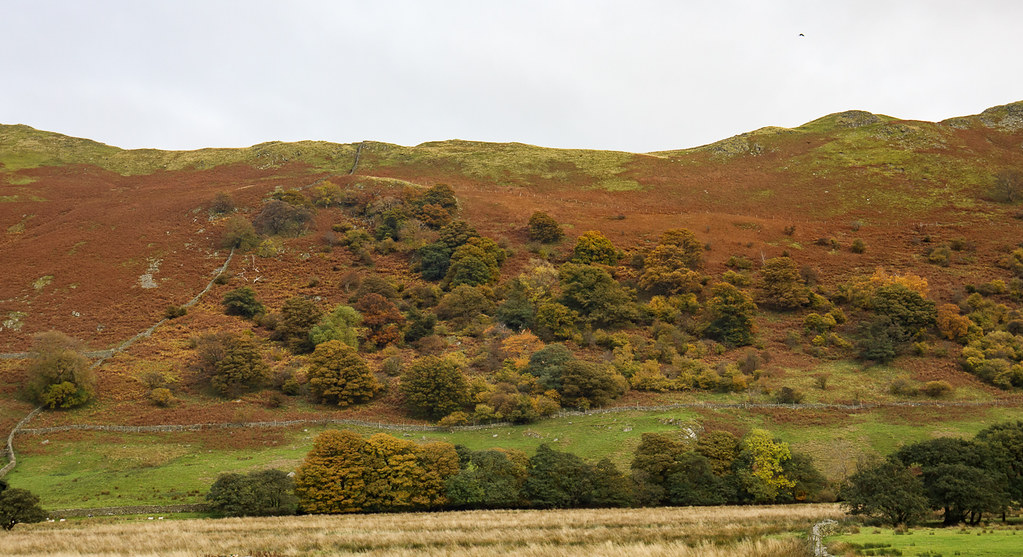 Hard to do them justice in a photo, but the colours are fabulous at the moment. 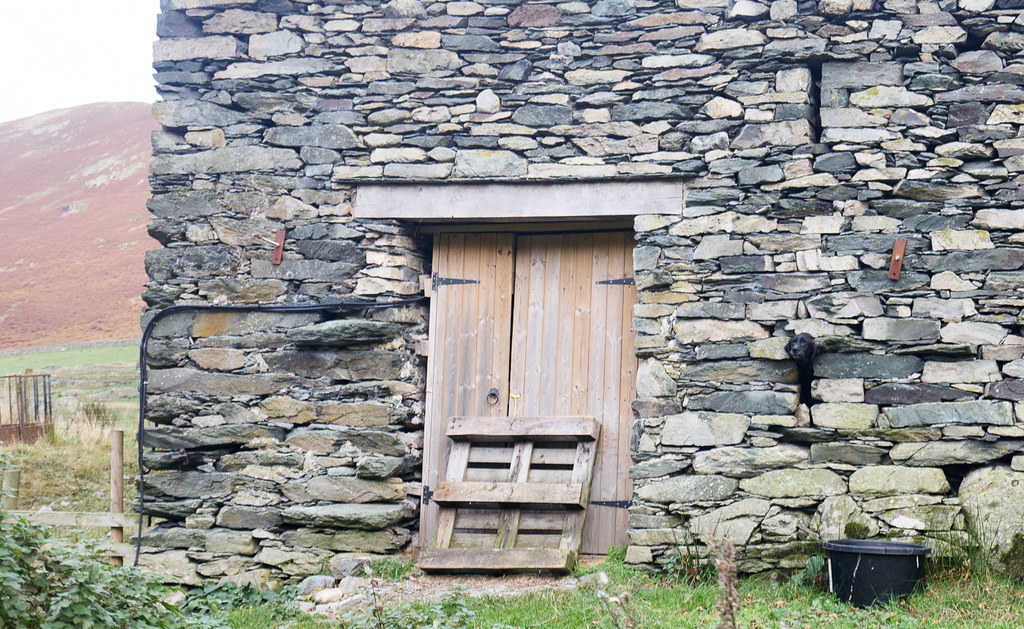 The Dog in the Window

This dog was determined to bark at all passers-by - I don't THINK it was stuck... 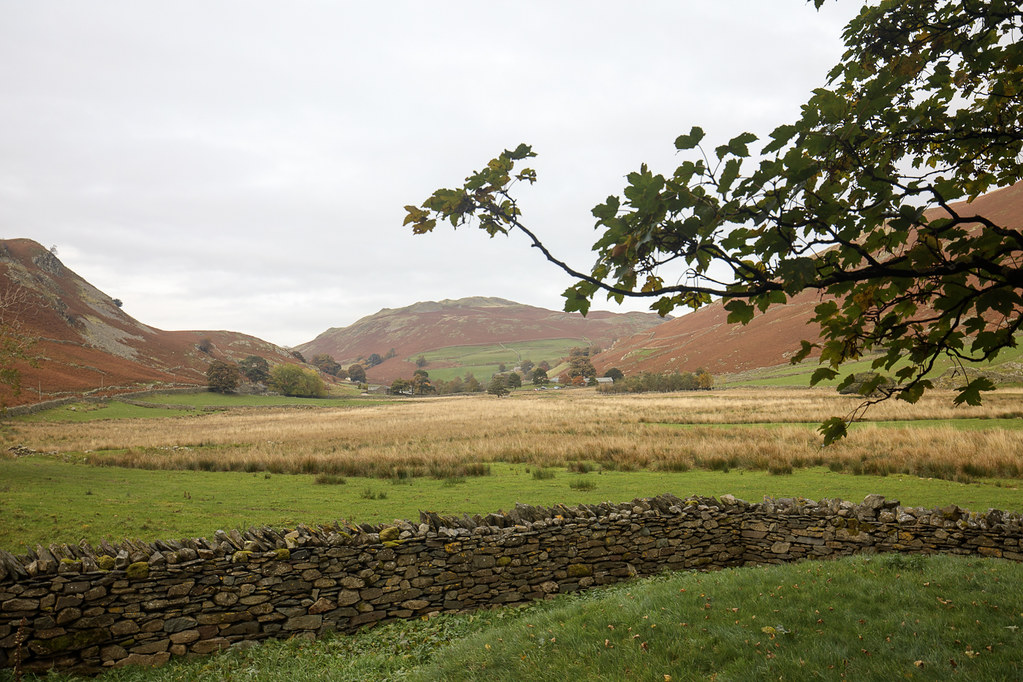 A last view of Hallin fell as we approached the car. 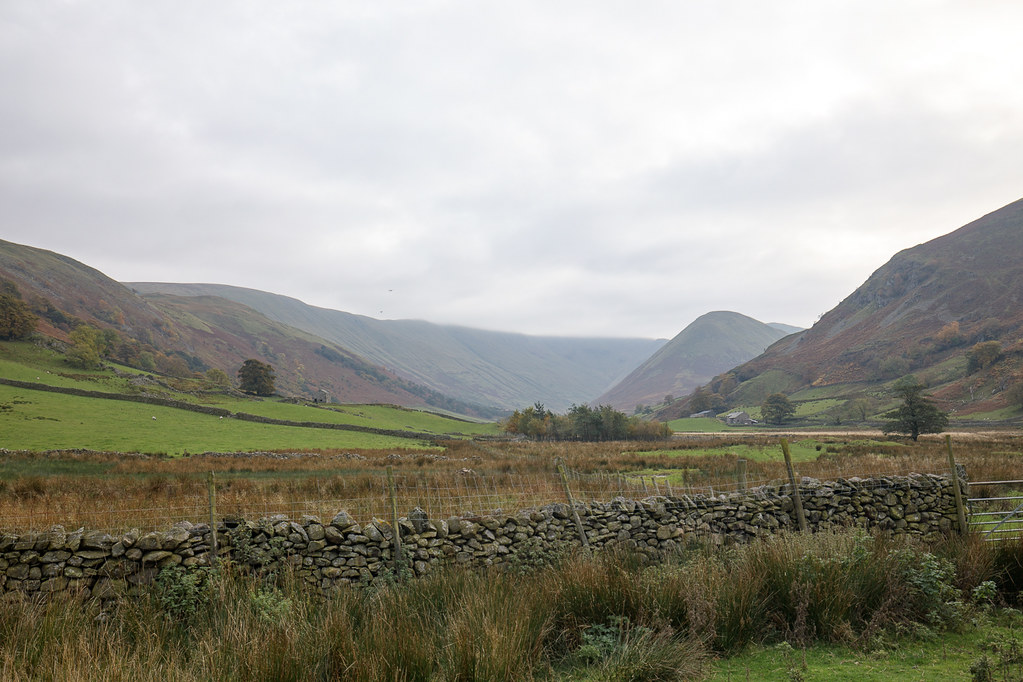 And a last look back up the valley.

A nice gentle walk for our first day - off home to check that we all survived it ok and to plan something a little more energetic for tomorrow.

Looks like a fine wee start to me RC, you got some nice shots along the way but the winner for me by far is the 'roundabout for bogs'