Munros included on this walk: Mayar


Having done a lot more hill-walking over the summer than for many years I thought that finishing the better weather off by getting to the top of a Munro seemed a good challenge.
The obvious and closest candidates were Mayar & Driesh at the head of Glen Doll.
Being fortunate and able to choose which day to go out on I decided on last Monday (24th Oct.) as the forecast was for wet early but dry and sunny/cloudy conditions later in the day....

20161024.gpx Open full screen  NB: Walkhighlands is not responsible for the accuracy of gpx files in users posts
I woke with the alarm to the unmistakable sound of torrential rainfall and I did pause to question my sanity as I got ready to head off for the day. However, the rain stopped, the clouds slowly cleared and on arrival at Glen Doll it was a passably good day, even with spells of sunshine. After a friendly chat with the Ranger I was off along the track to Corrie Fee just before 10. And before too long was at the exit from the woods at the base of the Corrie, more geography than you’ll see in many places in a lifetime. The entertaining part was trying to pick out the track in the distance as it went up the headwall of the corrie. A steady pace uphill was good enough to get slowly to the base of the waterfall, which seemed fairly tame considering the recent amount of rain.
The view back down was very cheering, showing sunshine and the progress already made. Looking back NE from the waterfall.

A bit further, and the slope eased off, and it was time for a break, looking back at the lip of the corrie. Corrie now in the past!

The next stretch upwards looked as if it should have been easier but felt to be just as much work as the corrie. As the track widened out I ended up zig-zagging upwards in an attempt to make the climb easier. I knew I had 7-800ft to go upwards to the top and will admit to sneaking looks at the GPS altitude for encouragement since there was no obvious summit ahead and it felt a bit like a treadmill. At around 3000ft, when it was by now clear where the summit lay, there was a sudden commotion at my feet and a ptarmigan, in nearly complete winter plumage, shot off to my left in indignation, having narrowly avoided being trodden on. Definitely very smart camouflage, though maybe they should learn to keep their heads down when on the skyline!
Next stop was the summit and the great views.... 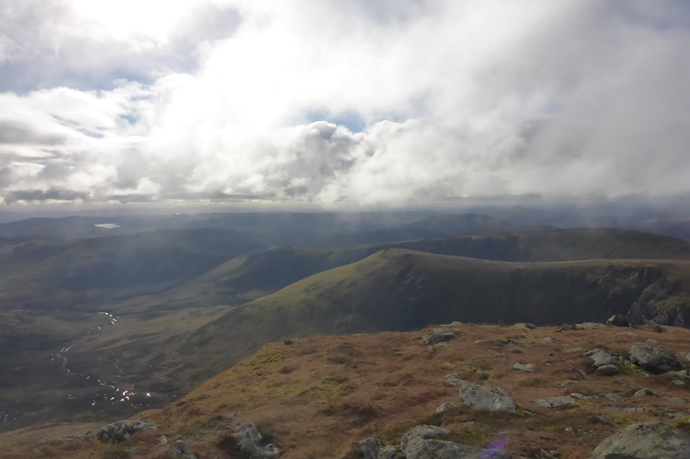 In pretty much every direction except the one I wanted to go in. 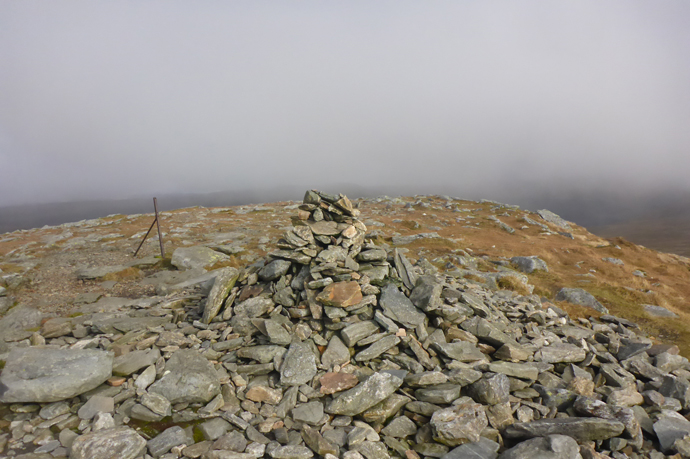 As the cloud and mist to the West was rolling merrily towards Mayar my leisurely lunch break on the lee side of a large boulder was cut short by common sense and a feeling that I would rather get to the next stage than have to check out the map & compass skills.
Looking back at Mayar it was easy to see where I had been... Mayar from the East.

But not so easy to see my next target. Arriving at the turn off to the Southeast for Driesh there was still a solid bank of cloud so I chose to leave it for the next time, any excuse will do when you’re feeling tired, and headed down the Kilbo path along the Shank of Drumfollow.
After a short stretch I realised I was following the fence line rather than descending on the track so retraced some steps and found the correct route. Naturally, within a few minutes the cloud had started to lift, but I stuck with the original decision and headed downhill to the noise of the stags on the top of the Northern slopes of Driesh. There appeared to be two groups of hinds and several stags were bellowing out an argument about possession being 9/10ths of the law! The descent was straightforward, including a chat with the Ranger again, plus 2 spaniels this time, at the forest edge before enjoying sunshine on the last mile or so. 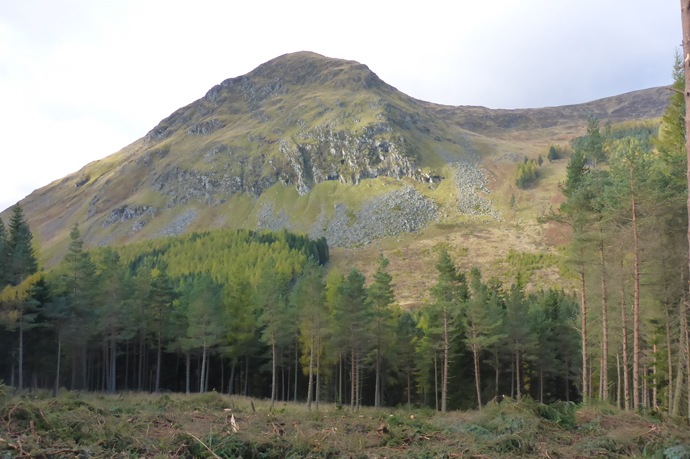 Back to the car park inside 6hrs, a great walk with a first - seeing the ptarmigan - and also my first Munro for 40 years, so definitely a good day out!