Track_Loadpot.gpx Open full screen  NB: Walkhighlands is not responsible for the accuracy of gpx files in users posts

We were sufficiently encouraged by yesterday's outing and the lack of ill-effects, that we planned something longer today. The aim was to complete the northern end of the High Street ridge if possible, though we knew it would be a tall order to get as far as Wether Hill and back to the cottage before dark. 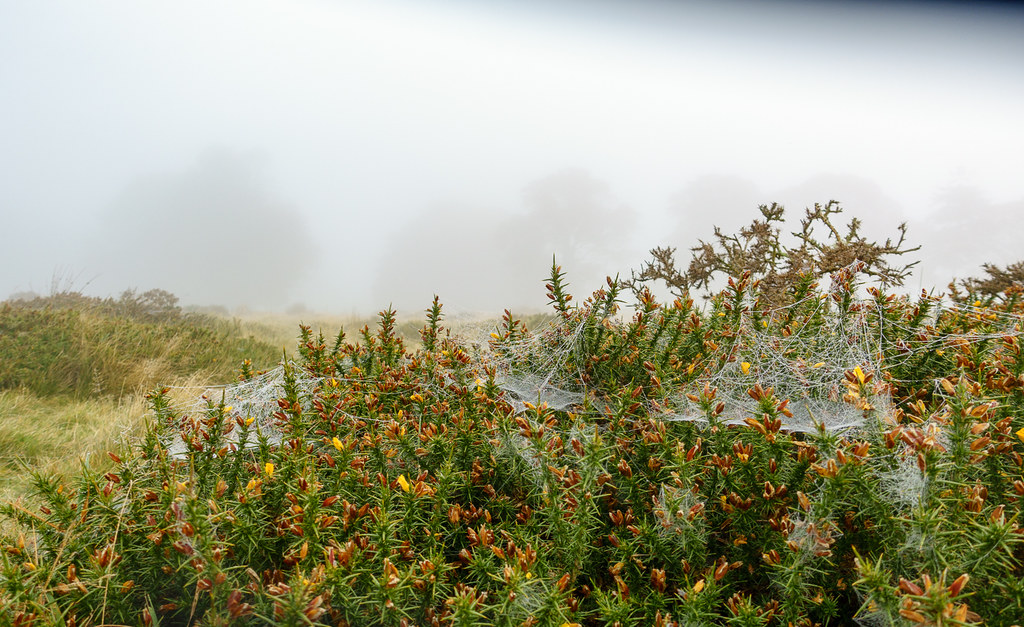 We set off early - still misty - across the moor that adjoins the cottage we are staying at. 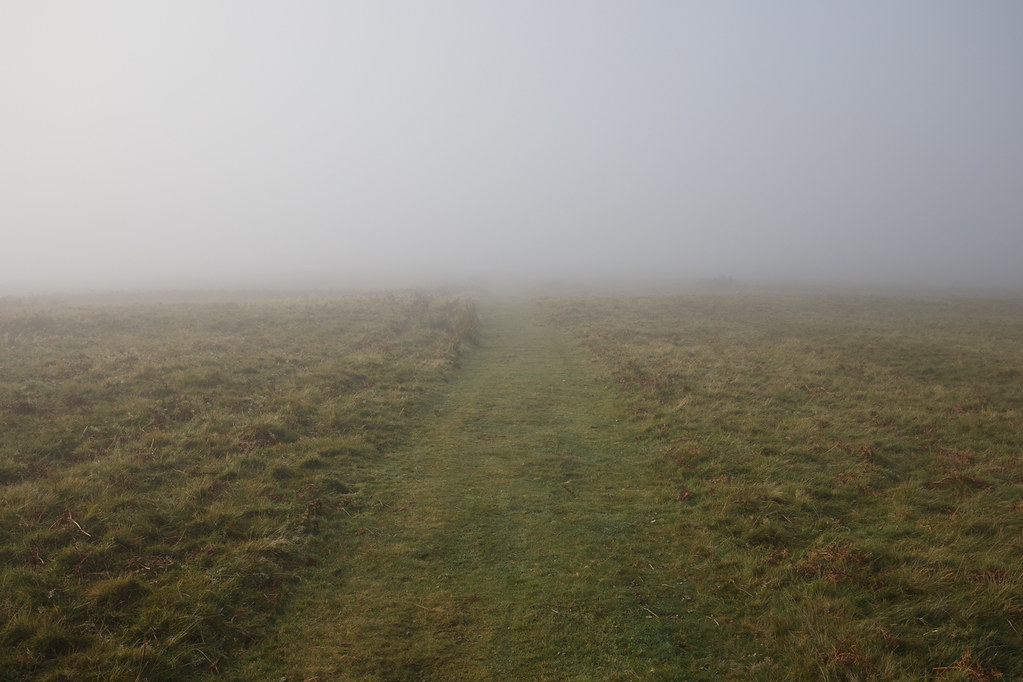 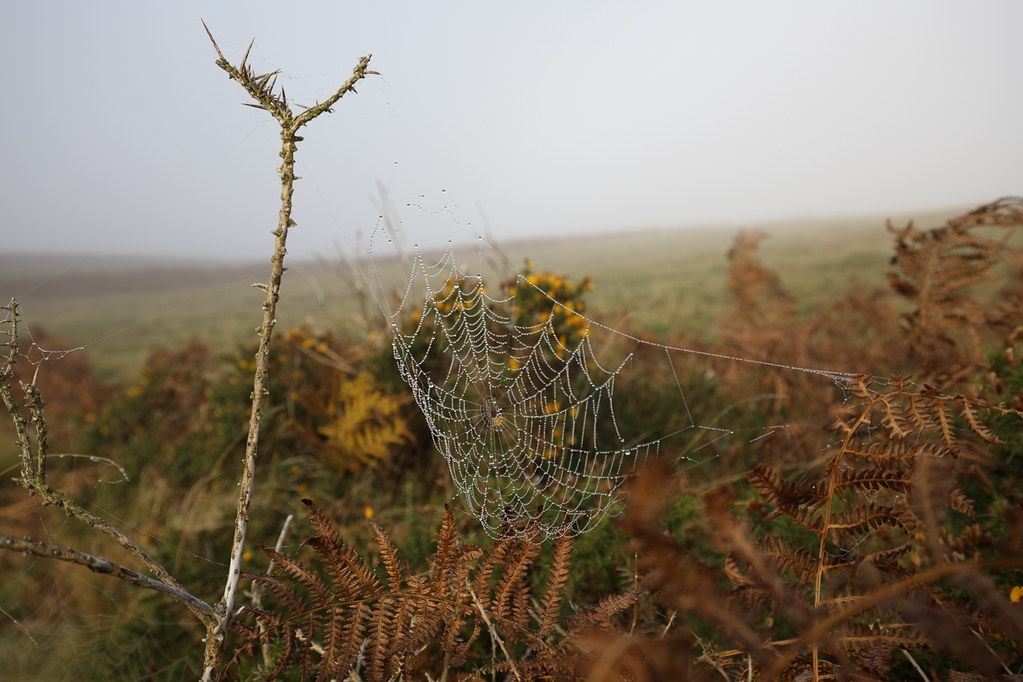 Lots of photogenic webs, though I don't really carry the right camera with me when walking for this kind of shot... 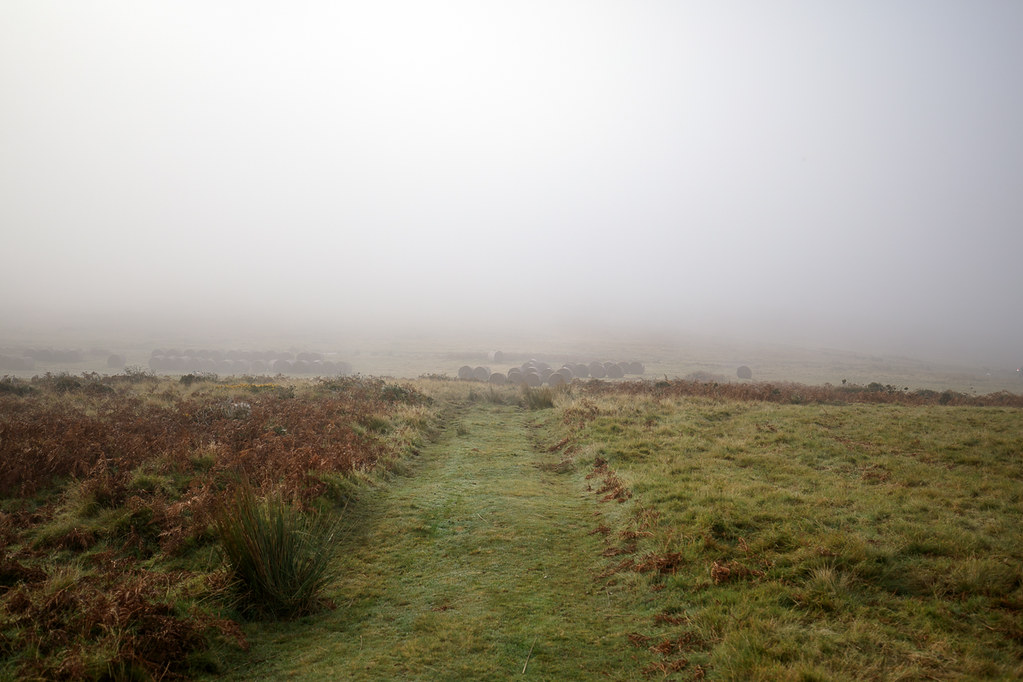 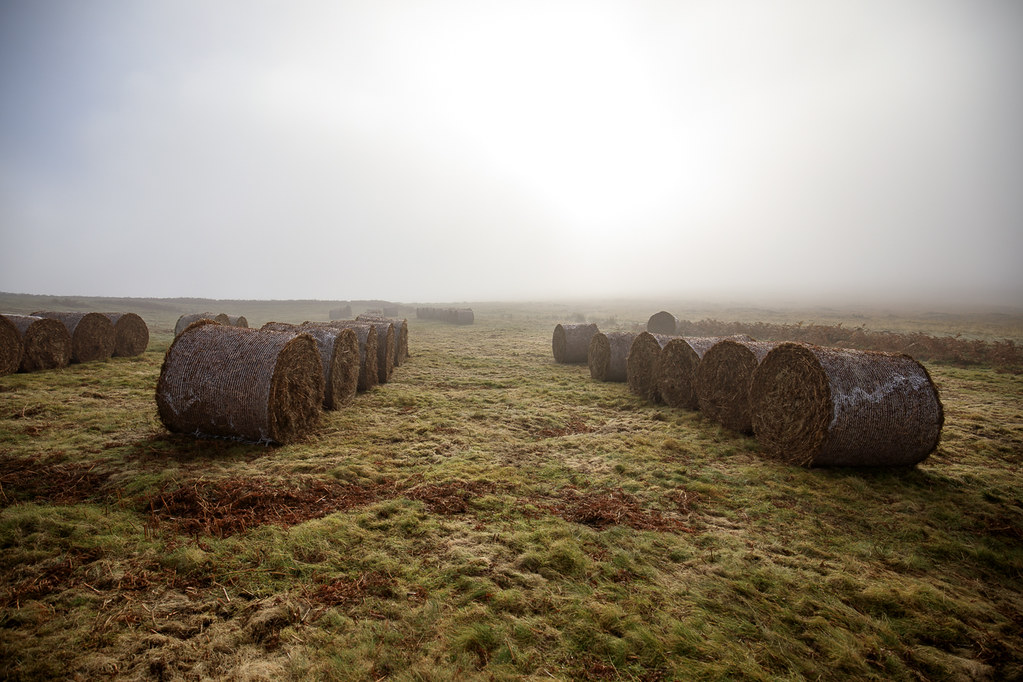 Coming down from Heughscar Hill (a Wainwright outlying fell) we were a little surprised to find these hay bales - I don't recall ever seeing hay harvested this high up the Lakeland fells before. 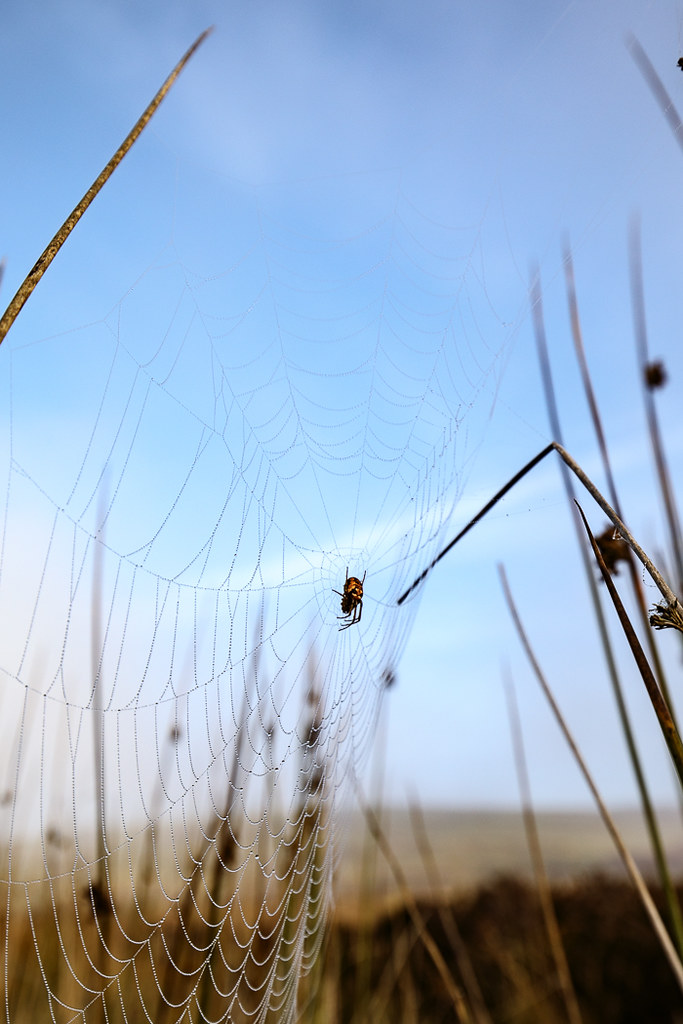 Still after the arty shot of spider webs...

The Cockpit on Moor Divock

Not sure what the "cockpit"'s original purpose was - it's a little large to have been a genuine cock fighting venue. Lorraine decided it was some sort of magical venue and offered the dogs a "magic biscuit" which of course they gleefully accepted. 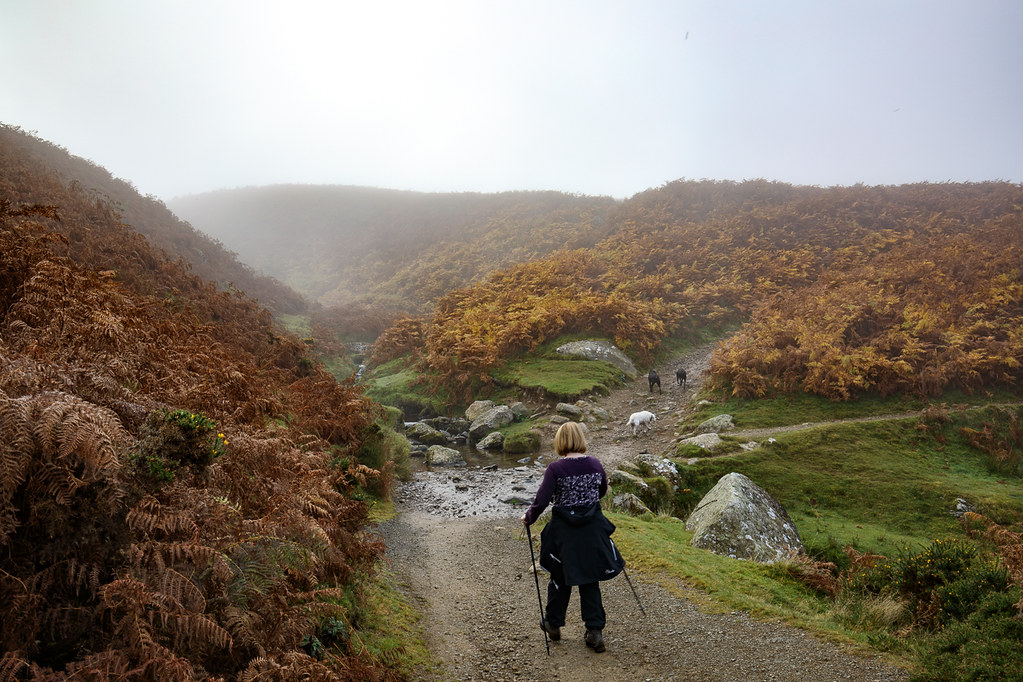 We carried on from the cockpit down a good path towards Arthur's Pike.

We were still in the mist at this point, but just starting to get hints of the view over Ullswater that we suspected should be there. 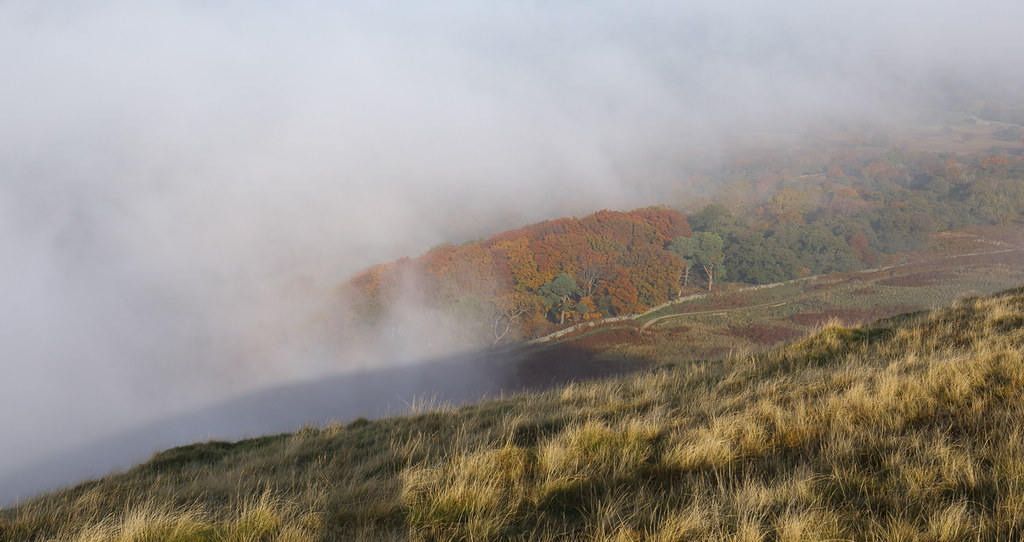 This ascent to Arthur's Pike has a lot of false summits along the way. But all have such lovely views that you don't mind. The view from this one was a lovely autumnal wood...

Not the best example I've seen, but still interesting to observe this glory https://en.wikipedia.org/wiki/Glory_(optical_phenomenon) where my shadow fell on the clouds below.

As we proceeded towards Arthur's Pike the view kept improving, though the mist never really left the valleys. 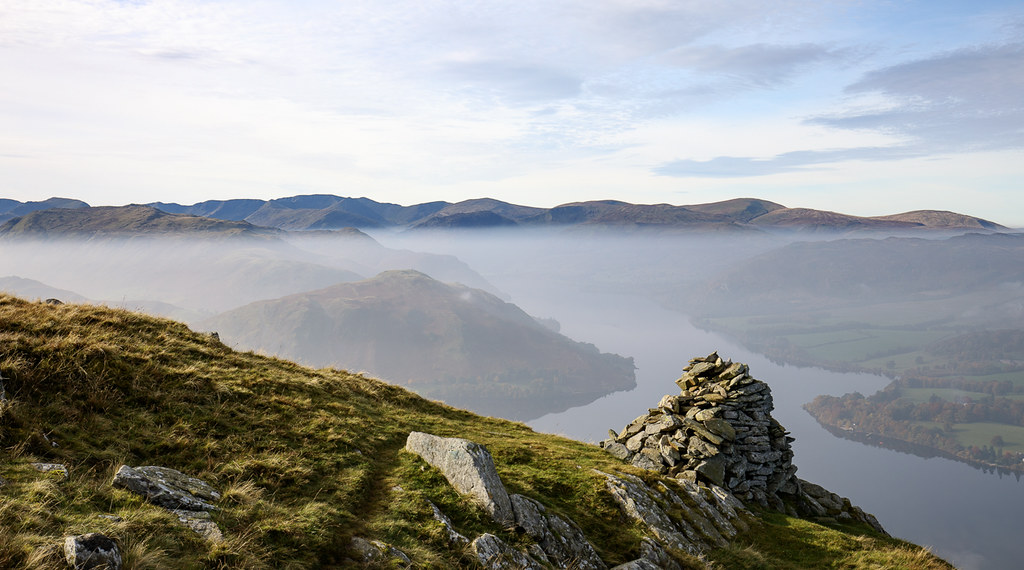 The Beacon on Arthur's Pike

The beacon is very close to the summit of Arthur's Pike, and has a lovely view over Ullswater and Hallin Fell. 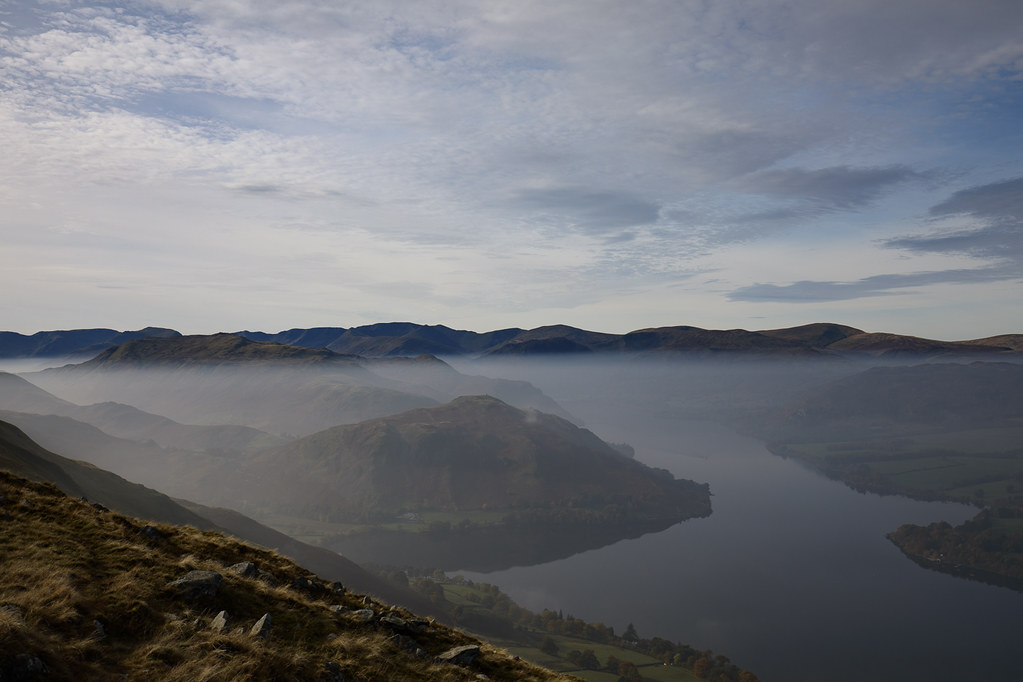 The steamer on Ullswater made interesting wake patterns. 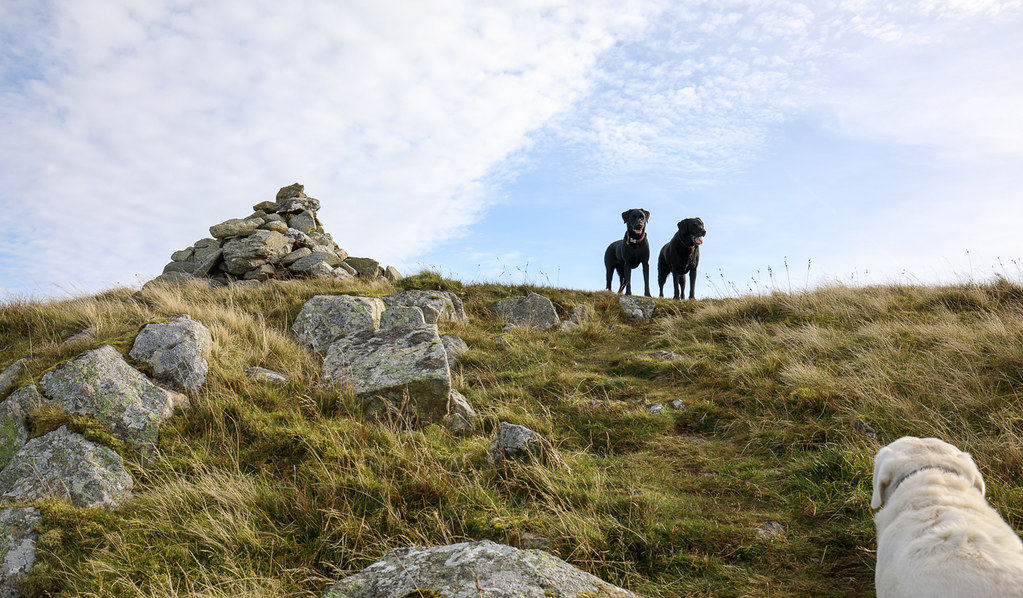 The summit is a little way back from the edge of the fell, and doesn't have as good views as the beacon. 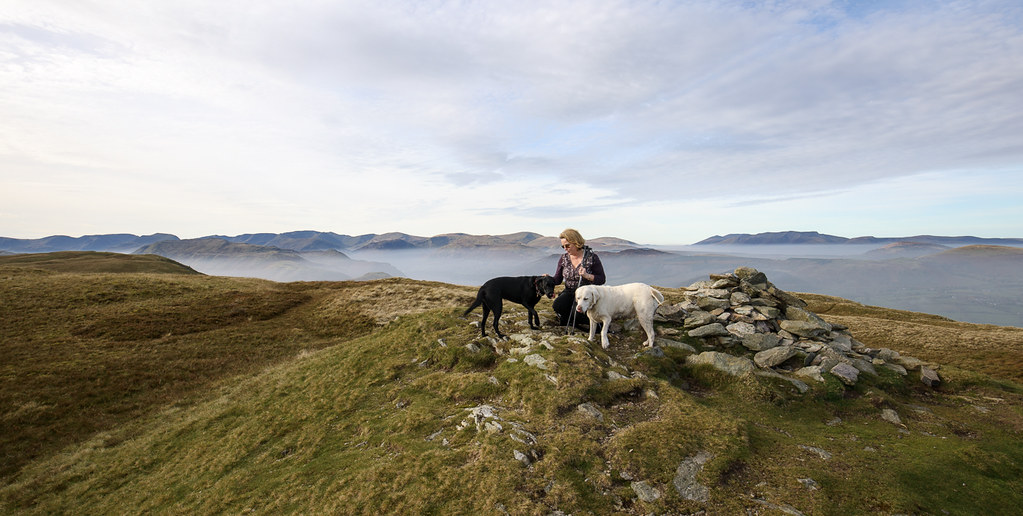 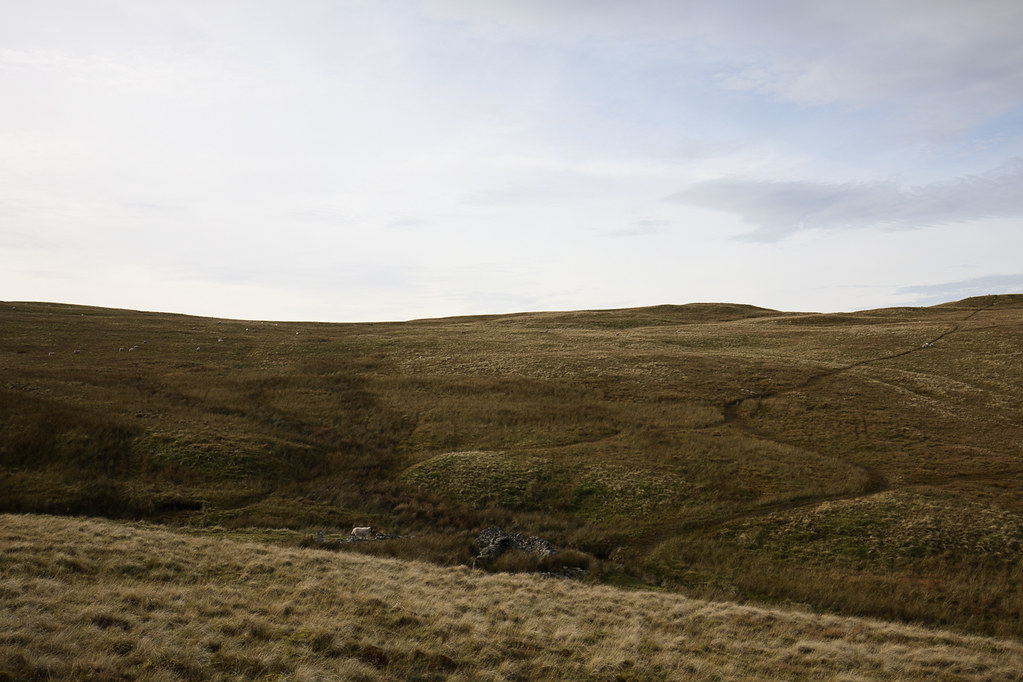 Sheepfold on the road to Bonscale Pike

From Arthur's Pike the path to Bonscale Pike is an easy and fairly short stroll. 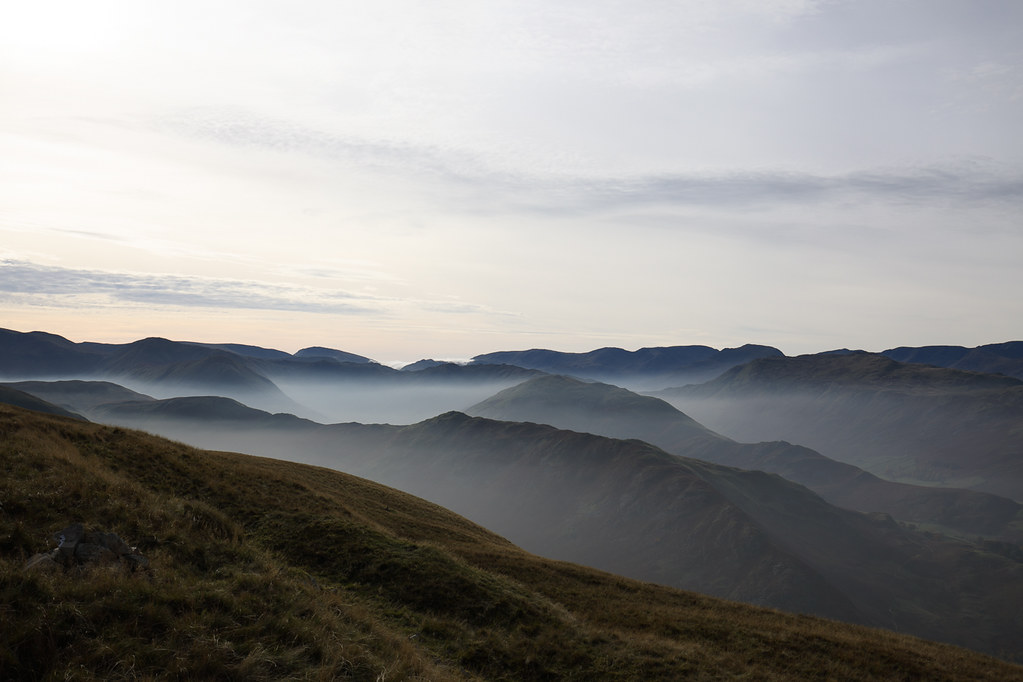 The views towards Helvellyn were spectacular - Catstycam and the ridges all showing beautifully. 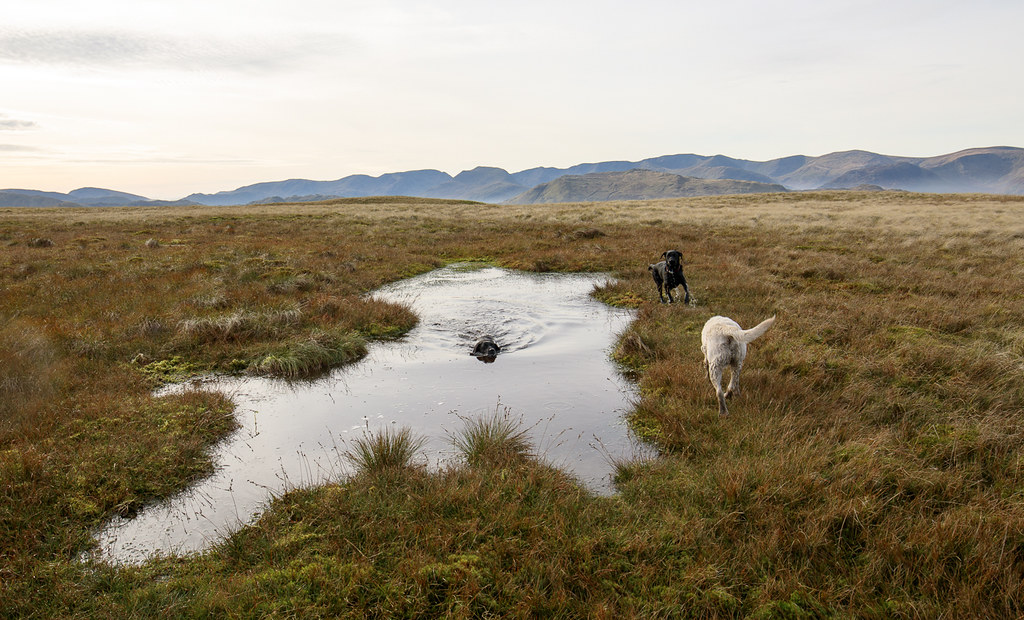 From Bonscale Pike the path across the moor towards Loadpot Hill had a welcome tarn for the dogs to swim in. 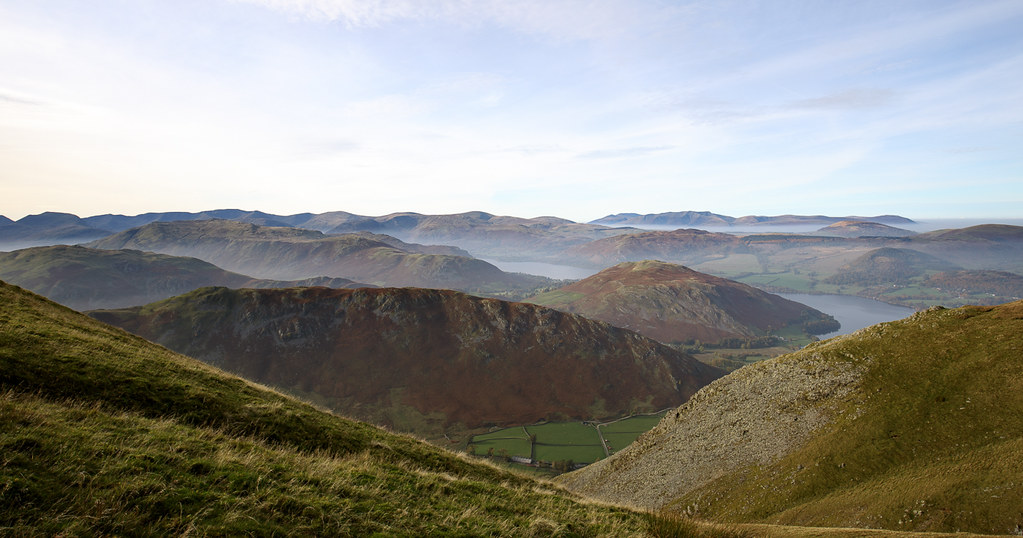 Lovely views over the Martindale fells.

First view of the Pennines

As we rounded the corner on the old Roman road at the back of Loadpot Hill, we got the day's first view of the Pennines. 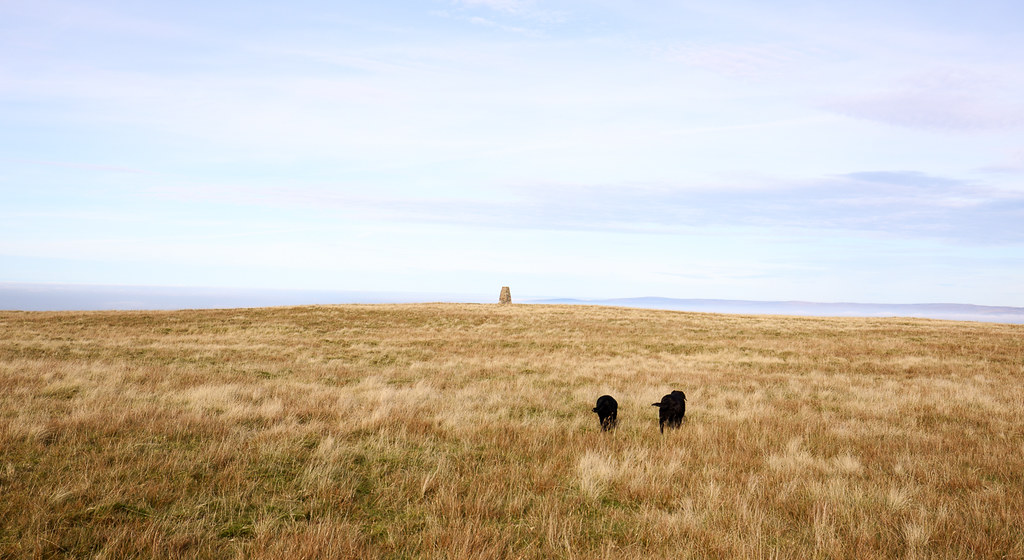 We got tired of following the path round the back of Loadpot Hill, and struck out across country for the summit. 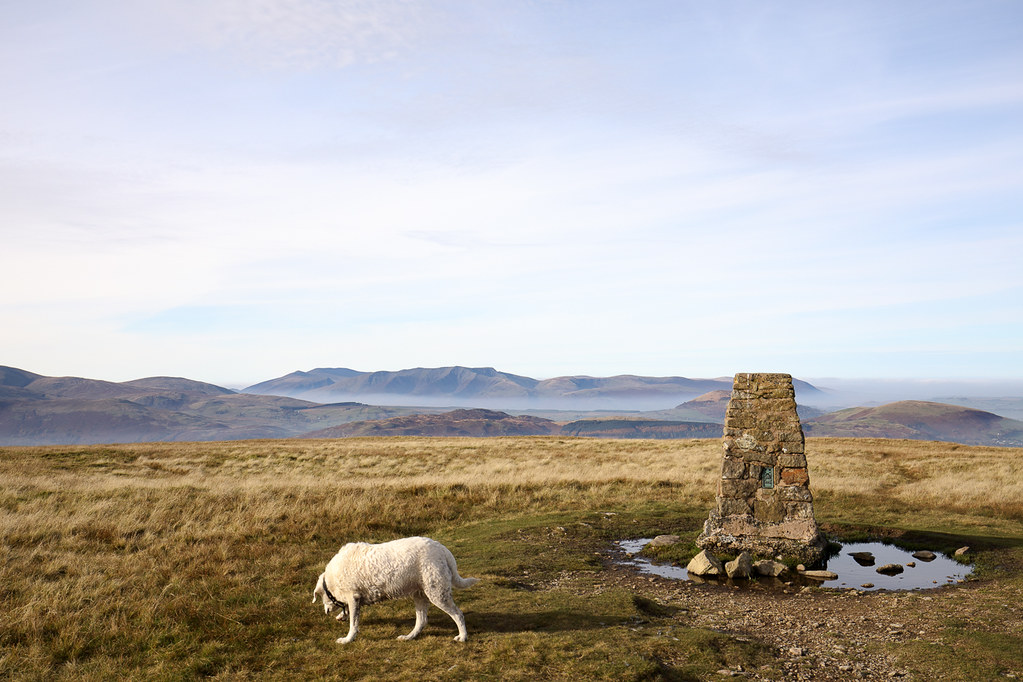 Not the sharpest of summits... 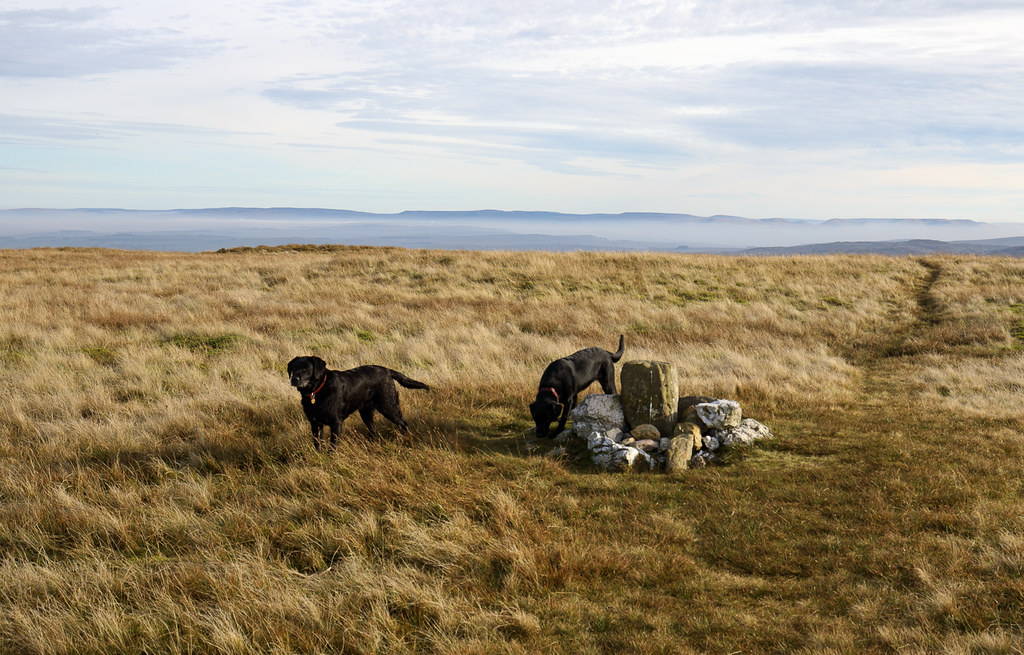 A glance at the GPS told us that we had about 3 hours remaining before sunset - and we were over 5 miles from home. Another mile in the wrong direction for Wether Hill was not going to work for us this time... 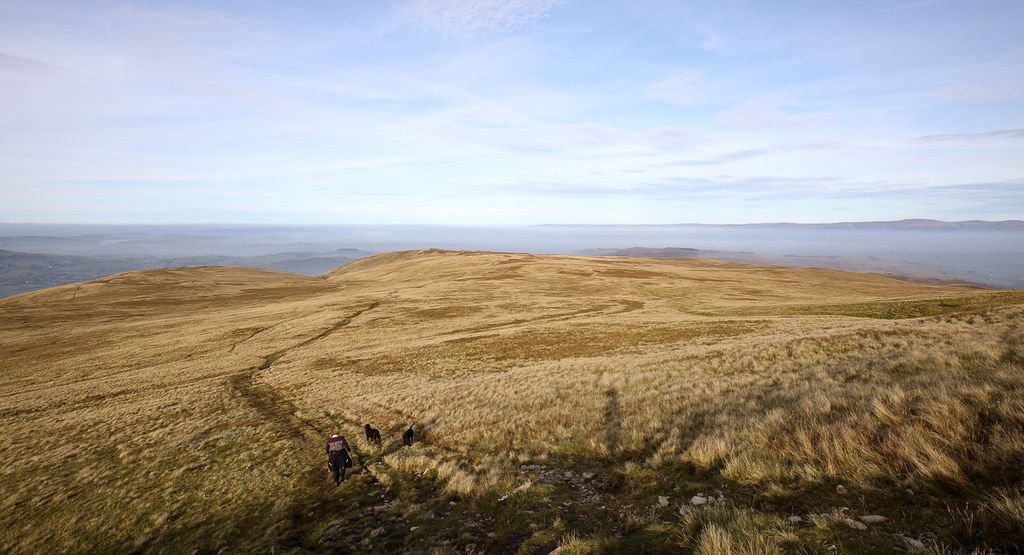 The road back from Loadpot Hill was very direct and very easy walking - basically just follow the old Roman High Street all the way... 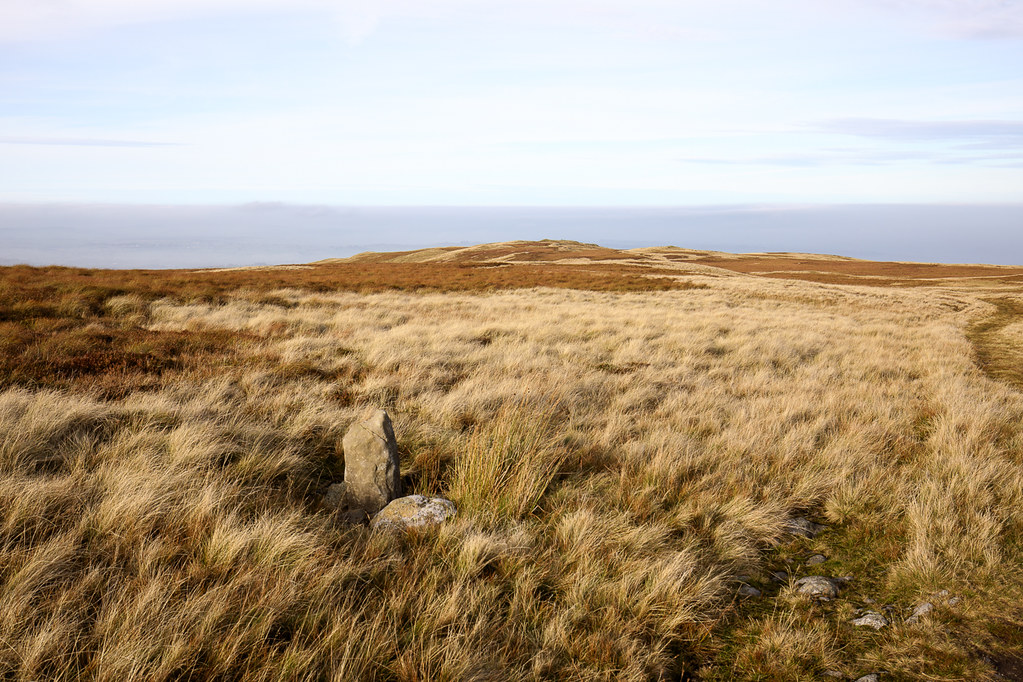 The boundary posts every half-mile or so were intriguing. Not sure what the boundary they mark is... 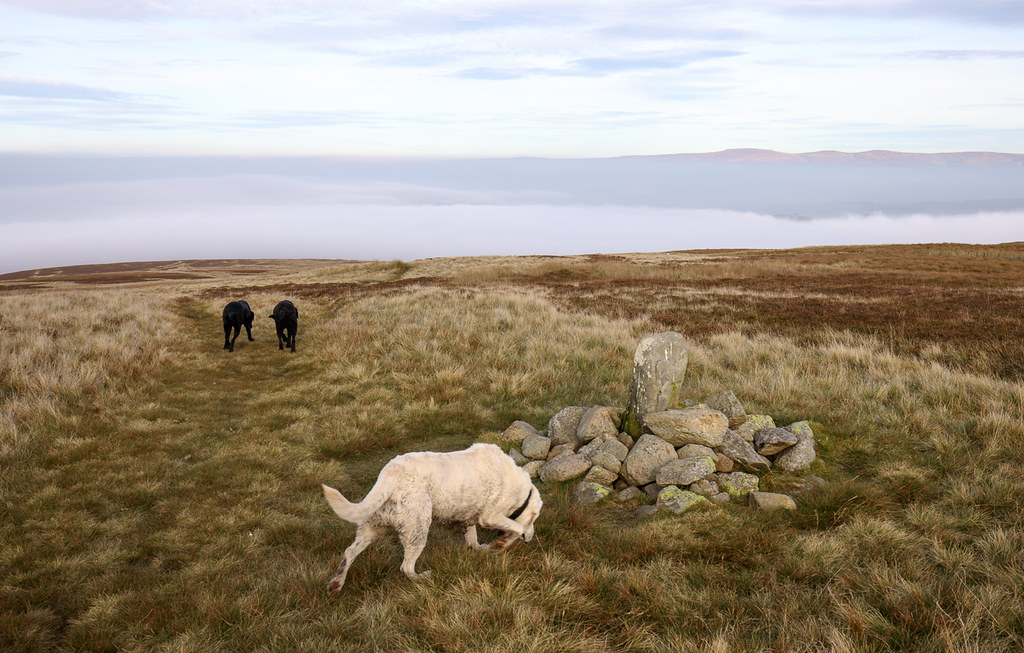 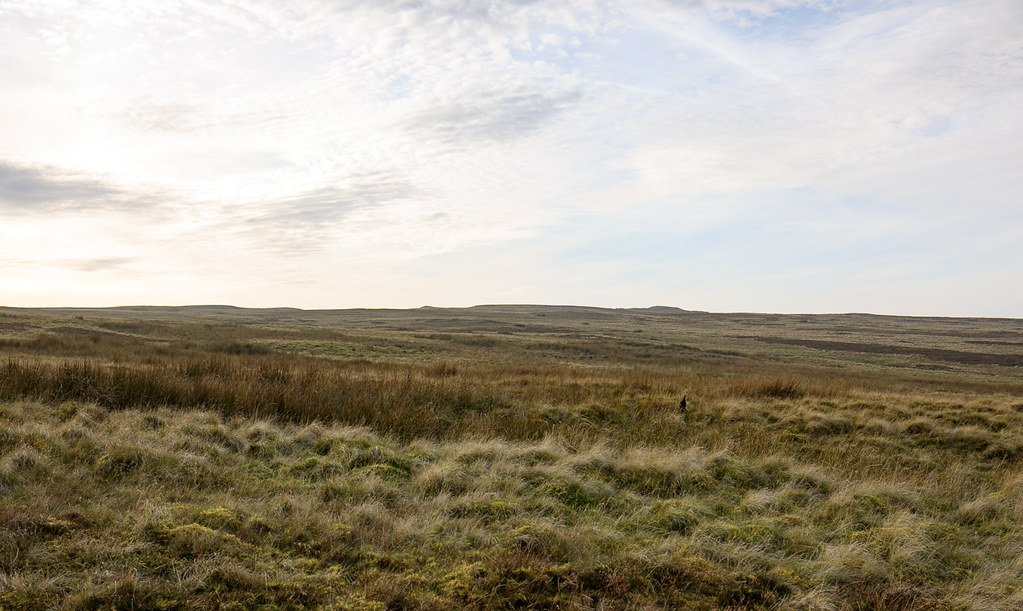 Ruby had been very well-behaved all walk not chasing sheep, but the grouse tested her obedience close to the limit... 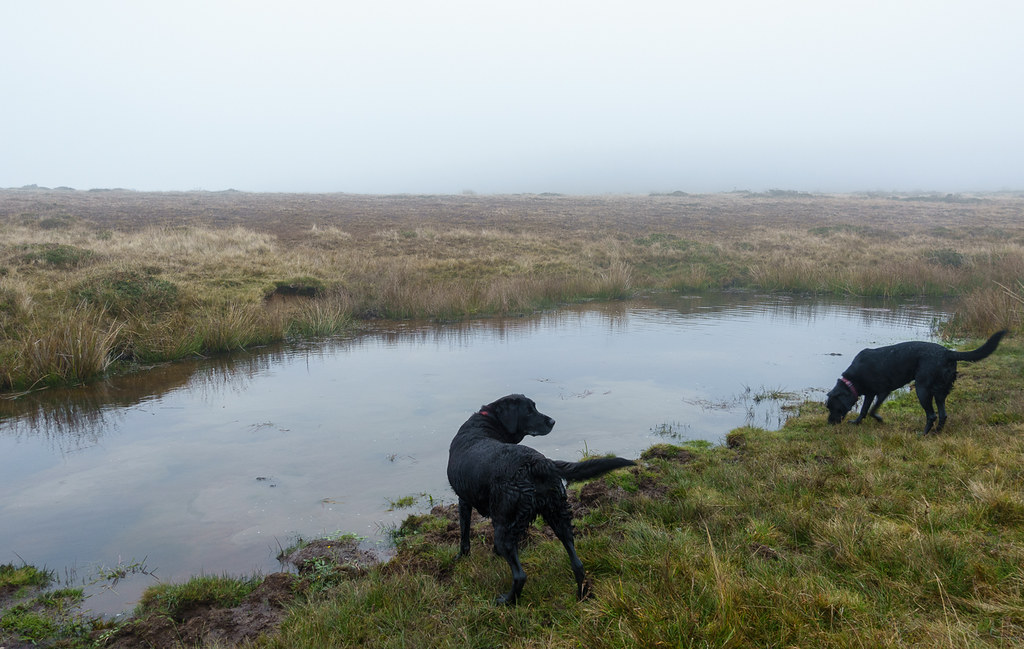 As we crossed back over the moor near Heughscar Hill, the mist descended, and the path got a little more erratic. Eventually we got fed up of trying to find paths to follow and just went for the beeline route via the GPS. Unfortunately this led us straight to this rather smelly pond, so the dogs arrived home stinking and wet...

A long but very enjoyable walk...

Re: Loadpot Hill and friends

This looks like one right off my playlist RC, exatly the kind of hike I loved when I was at home

Your photos are beautiful throughout and that can take some doing on these wide open spaces, the atmosphere in the mist early on and the dew covered webs are cracking

I've never heard what you refer to as 'glory' called that for these situations before, generally in hiking circles it tends to be referred to as a 'broken spectre' https://en.wikipedia.org/wiki/Brocken_spectre so thought I'd share, either way it's a fantastic and uncommon phenomenon.

Great report, one I would have enjoyed hiking myself