Over in Arran for a long weekend with the whole family (twelve of us plus my sister's wee dog Midge) for my dad's Eightieth Birthday celebrations... Somewhat unexpectedly, the morning of Saturday 1st October dawned sunny and unseasonably warm, and naturally enough the talk over breakfast quickly turned to a potential Goatfell outing.
After a bit of tough decision-making between the rival attractions of the Brodick shops versus a Hill Day, the final ascent team was whittled down to just five of us: my sister's husband Mark with their daughter Emily (who is already a keen walker at age ten); me and my own Padawan apprentice Mhairi; and of course the Wee Dug, who is always up for a good walk

.
We decided on the short, sharp ascent route from Corrie, and my mum kindly drove us up from Brodick where we were based, giving the opportunity for a nice linear route going up from Corrie and down to Cladach, eventually coming out at the Arran Brewery and the adjacent Wineport pub, handily enough

our_route.gpx Open full screen  NB: Walkhighlands is not responsible for the accuracy of gpx files in users posts
This was us just about to set off on the signed route to Goatfell up the steep tarmacked track to High Corrie: 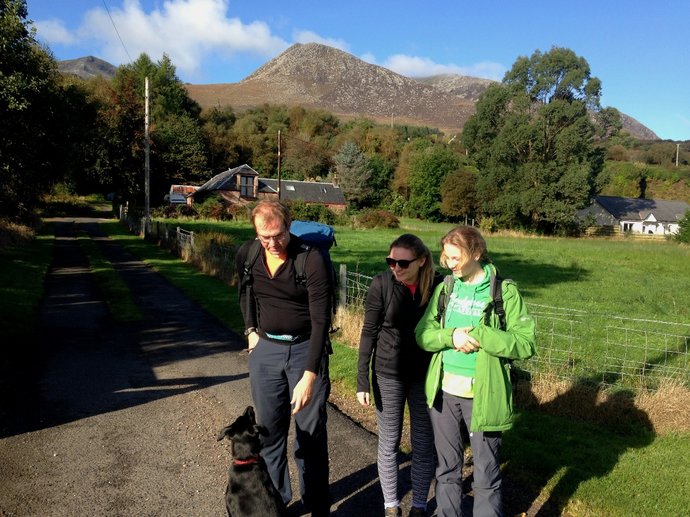 The Padawan Learner sporting some cool shades and stripy leggings: 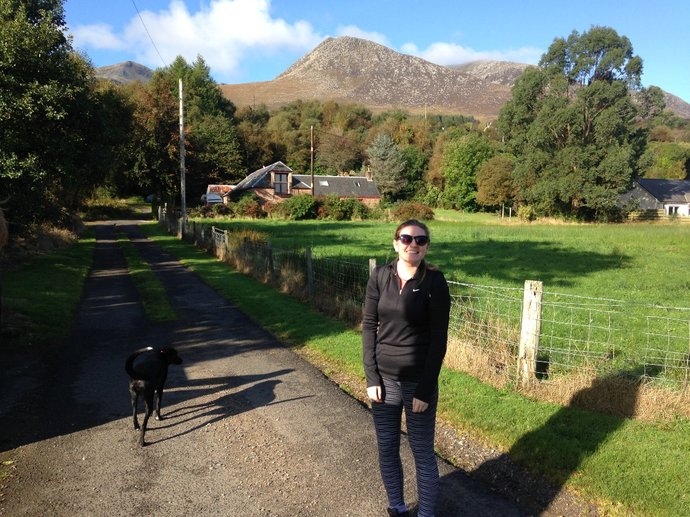 The Eightieth celebrations had already been started with gusto on the Friday night, however, and the Padawan and myself were feeling a bit green around the gills for the first half hour or so

... in fact, the Pawadan very nearly had to stop for a casual chunder! For some obscure reason Emily and Midge seemed to be feeling much less jaded than the rest of us, and were soon well ahead, needless to say. 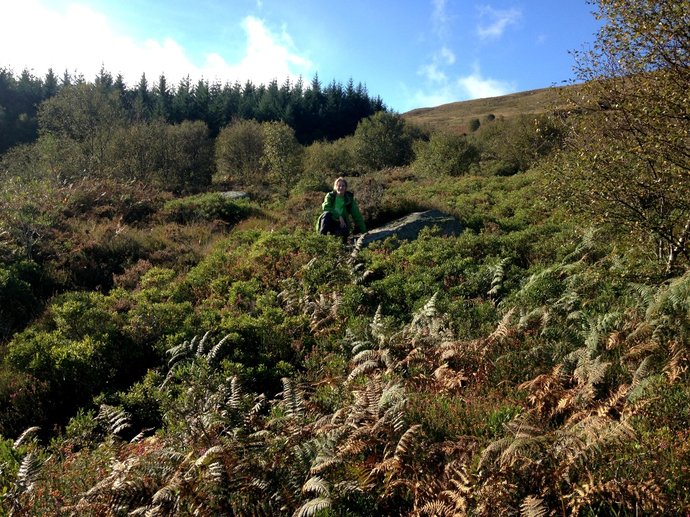 Thankfully the fresh air soon started to bring us round, and the views started to open up: wall-to-wall sunshine here on Arran, but quite a bit of lingering morning cloud over on the Ayrshire coast at this stage. 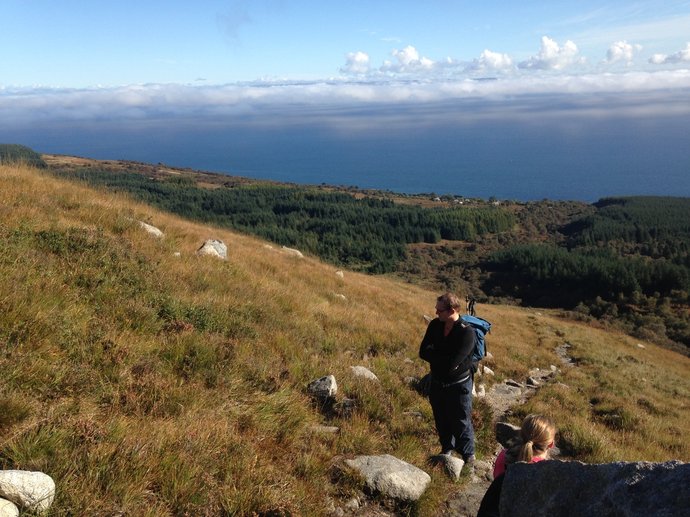 Although the Corrie ascent is fairly unremittingly steep, there's a good path all the way up, and with the Corrie Burn glittering in the sunlight while it showed off its tumbling skills, there was plenty of scenic distraction whenever we had to stop to draw breath. Not that Emily actually had any requirement whatsoever to stop to draw breath at any point: it was more a matter of perching regularly on a boulder for five minutes while the Wrinklies caught up with her 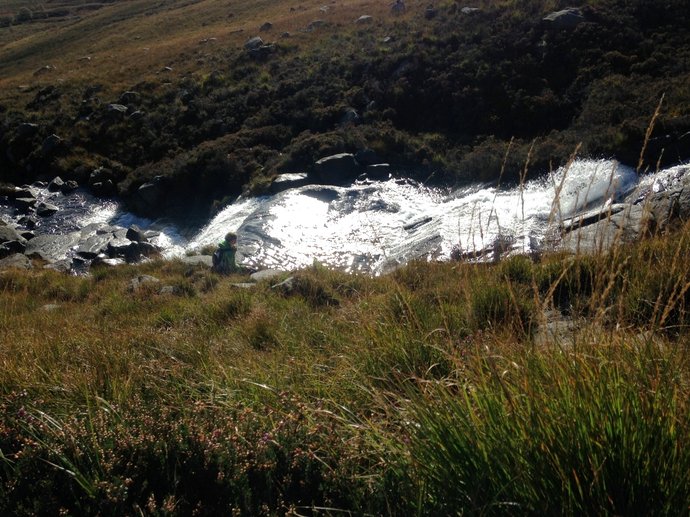 A bit higher up, the path comes to a fork at a cairn, with the right-hand branch heading straight on up the glen towards North Goatfell while the left-hand branch fords the burn to head more directly for the main Goatfell summit. We had decided on the easier left-hand-branch route, despite Emily's best attempts to persuade us to tackle the scrambly North Goatfell ridge. This was us about to cross the burn: 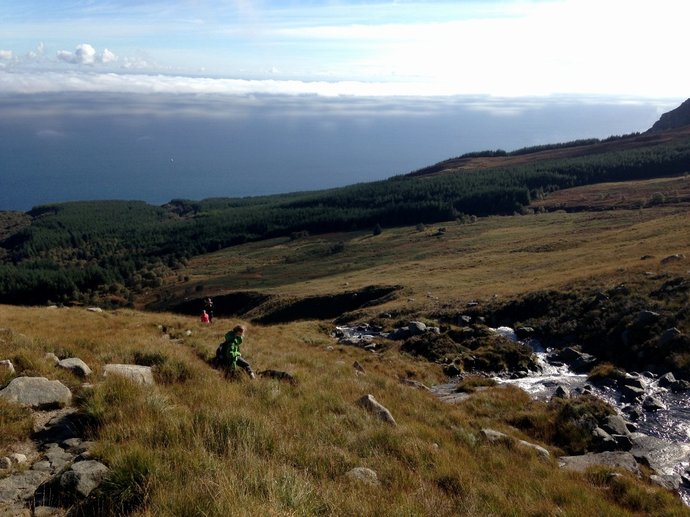 Goatfell's summit environs were clearly visible by now, looking quite a bit pointier than I remember it when I last climbed it as a teenager 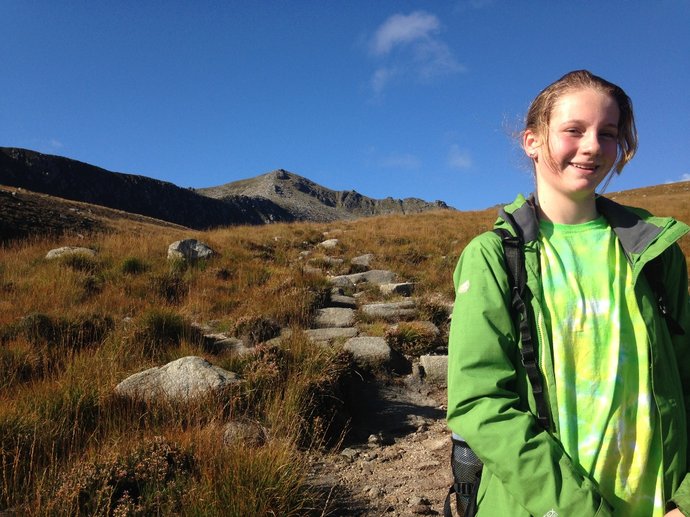 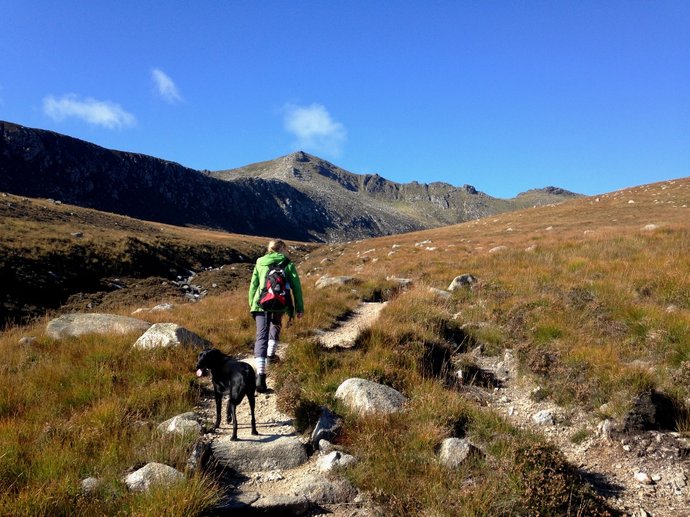 The Padawan finally made it across the burn, and understandably felt the need to stop for a minute or two to commune with the Force while she sat on a boulder. 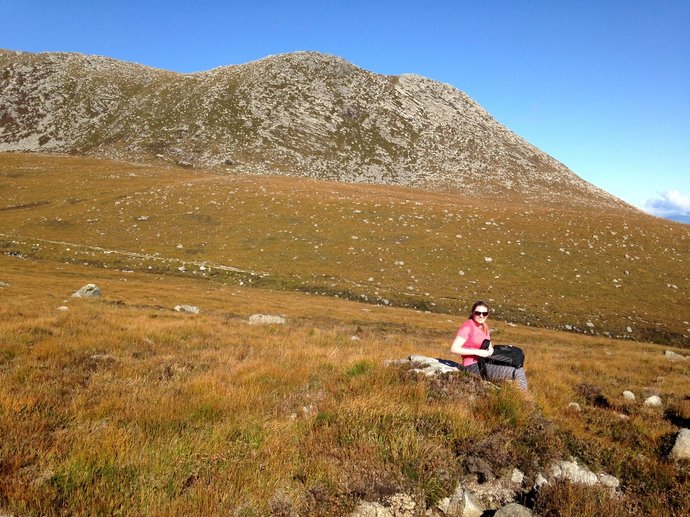 Midge enjoying a wee Monarch of the Glen moment... 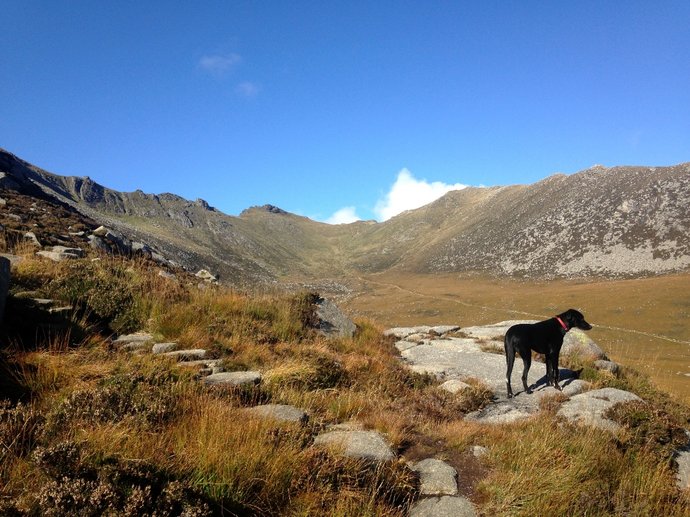 Now it was time to tackle the steep nose of Meall Breac, after which a mildly scrambly wee hill path leads up Goatfell's east ridge to the main summit. Mark had dropped back a bit to keep the Padawan company, while I did my best to keep up with Emily (an increasingly forlorn hope). 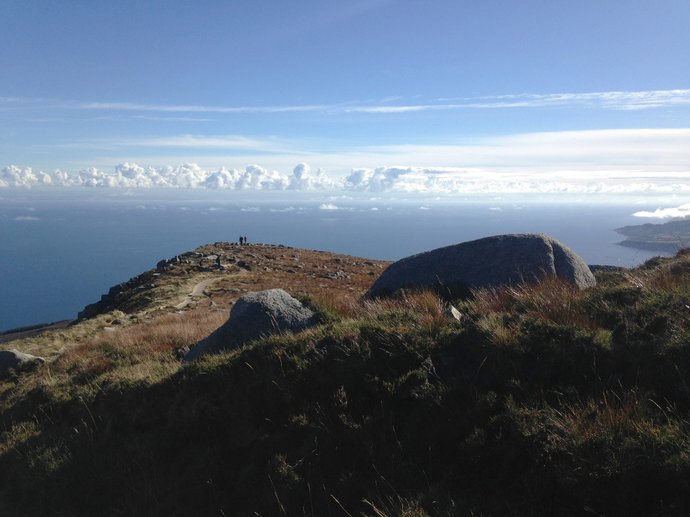 The cloud had started to clear from the Ayrshire coast by now, and there was a nice view down over Big Cumbrae and Wee Cumbrae out to the north-east. 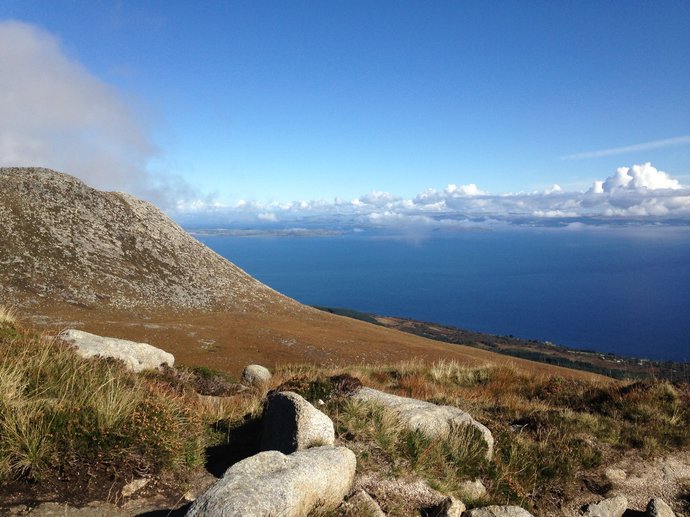 Emily insisted that we stop to take some photos of this wee chappy on the way up: 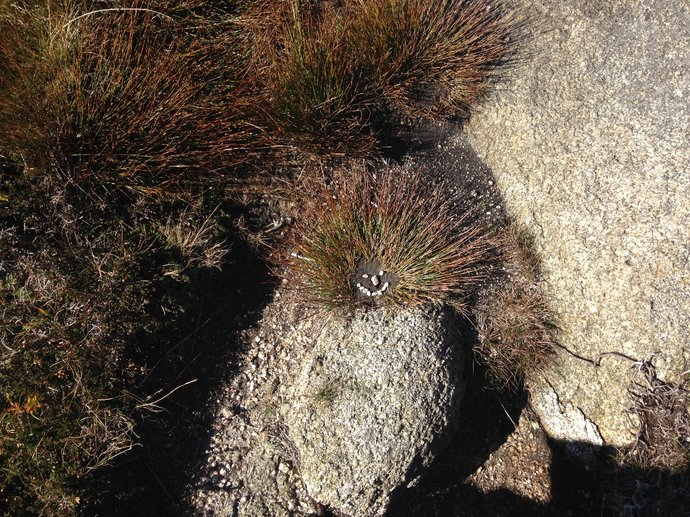 It wasn't much further to the summit Trig point. Emily with Cir Mhor and Caisteal Abhail in the background: 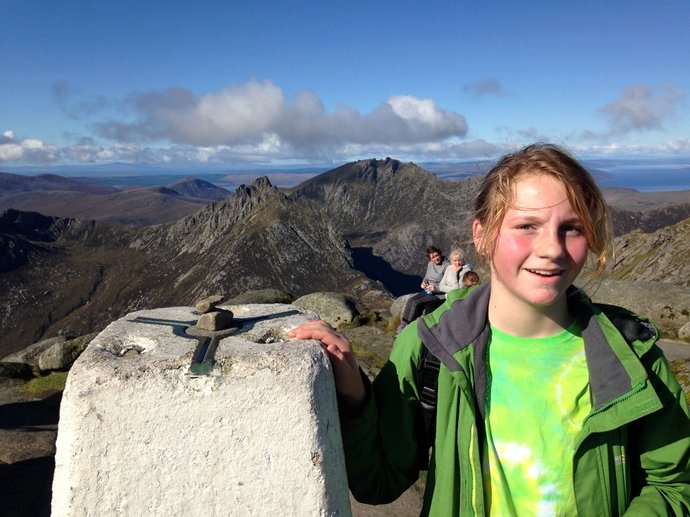 Me at the top, sans Bobble Hat: 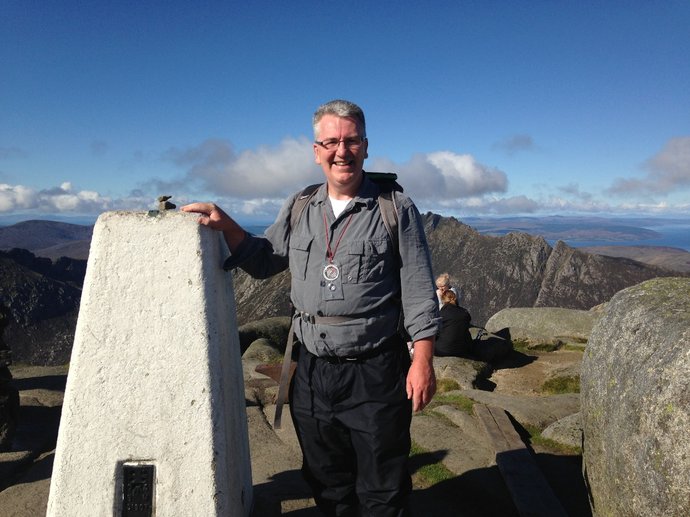 The air clarity was quite spectacular, with views out right over Kintyre to the Paps of Jura to the NW, and right across Ireland as far as the distant Donegal hills to the SW. Cir Mhor and the A'Chir ridge were looking scarily precipitous, as ever! 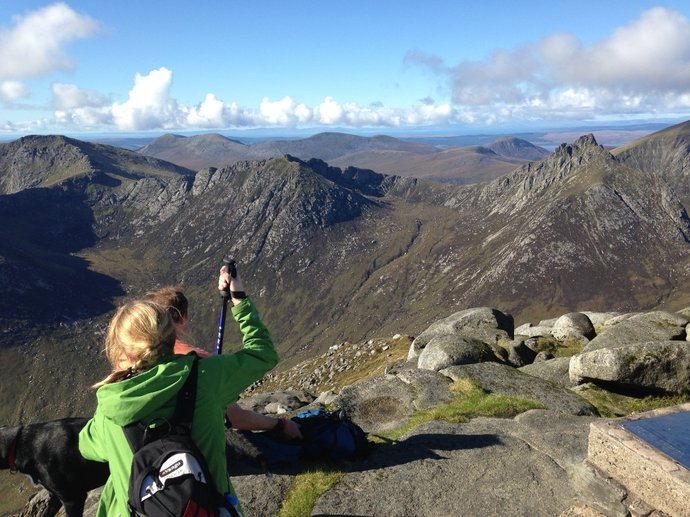 The Padawan reaches the summit! 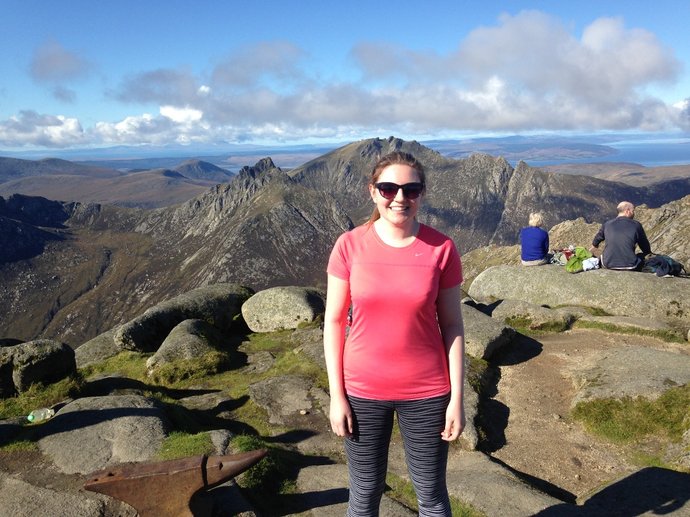 Time for a lunch stop. Emily had soon wolfed down her lunch, and was enjoying a bit of casual scrambling with Midge while the rest of us munched our cheese sandwiches. Sometimes the Dark Side of the Force I sense in this one... With some reluctance, we eventually left the amazing summit and set off back down. More grand views down onto Holy Isle on descent: Emily and the Padawan with Holy Isle in the background, as well as Ailsa Craig away in the distance to the right: This time, where the path forks at a cairn a bit before reaching the Meall Breac promontory, we took the right-hand fork to descend south-east then south towards Cladach. The Wee Dug couldn't resist stopping for another Monarch of the Glen moment at this point! Although it was quite a bit longer than the Corrie ascent route, the Cladach path gave an eay and enjoyable romp all the way back to the Arran Brewery. When we reached the Wineport, it was clearly time for the Padawan to receive further instruction in the Jedi Way: My mum thankfully drove round to give us a lift back to Brodick, so we all had time to get showered and freshened up before the big Eightieth Birthday celebration that evening in the Brodick Bar. Here's the Birthday Boy with his cake: A memorable outing, and truly amazing weather for October

Ahhh see this is a much more sensible way to do the linear walk, rather than ending up in Corrie after the bus and witha 4 mile walk

Huff_n_Puff wrote:Lovely photos - sounds a great family weekend - and another walk report tempting me off to Goat Fell

Thanks - the fabulous weather undoubtedly helped the photos!
Goatfell is a great hill, and the other three slightly lower Corbetts are arguably even better (although actually a wee bit more strenuous - size isn't everything

). Cir Mhor is particularly good.
The rest of the island has a lot to offer, too

Jaxter wrote:Ahhh see this is a much more sensible way to do the linear walk, rather than ending up in Corrie after the bus and witha 4 mile walk

Thanks again!
Yes, doing the walk this way round does make for an easier return to Brodick: although the Corrie Hotel would be another good watering hole if doing this route in the opposite direction, I suppose