Two Out Of Three Ain't Bad

Two Out Of Three Ain't Bad


This was my second "Walkhighlands meet", and an opportunity to meet up with the new friends I made at the end of July. A part of me looked forward to walking with others for a change. However, I always like to include a peak I have not climbed, which means a Graham or a Corbett, even if the route includes a further ascent of a Munro. I like to leave home with a definite objective, preferably something reasonably challenging. If not, there is a tendency to rise out of bed late and then waste half the morning discussing the options, thus reducing the options, especially beyond the autumnal equinox.

So I was up at the crack of dawn. In fact, earlier! A few others emerged at the other time. Others with sights firmly set on a Munro they have yet to bag. I may have been the first to leave the car park, but I wasn't going anywhere until I found my car key!

I am not used to setting off for the weekend in my work clothes. I usually pop home first. 25 minutes later, I had found the keys in my work jacket and was off to Glen Elchaig, where there is ample parking at the end of the public road. 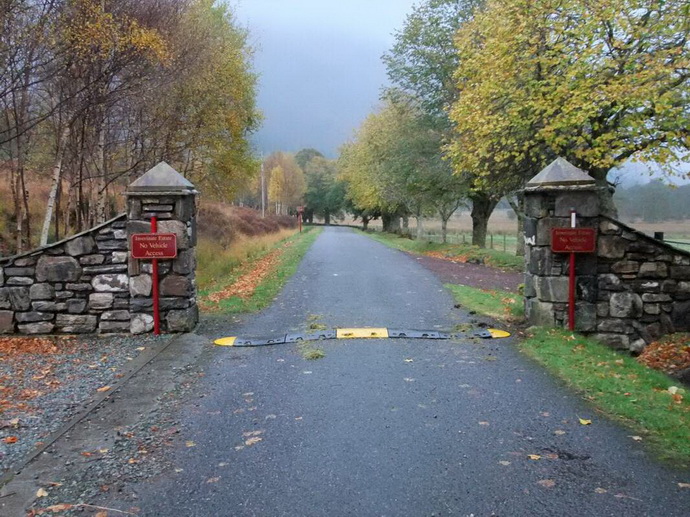 It had been my intention to head off before sunrise, which in fact, I did - Sunrise at Ratagan was 08:28:29 and the above photograph was taken at 07:59 - still a reasonably early start.

I really enjoyed the bike ride up Glen Elchaig and I took my time, stopping to take photographs and periodically to check my map. I was rather impressed by this unusual double bridge and it was great to see both the Highland cattle and the numerous stags. The route was generally easy going even after the smooth tarmac turned to a more broken and stony surface. 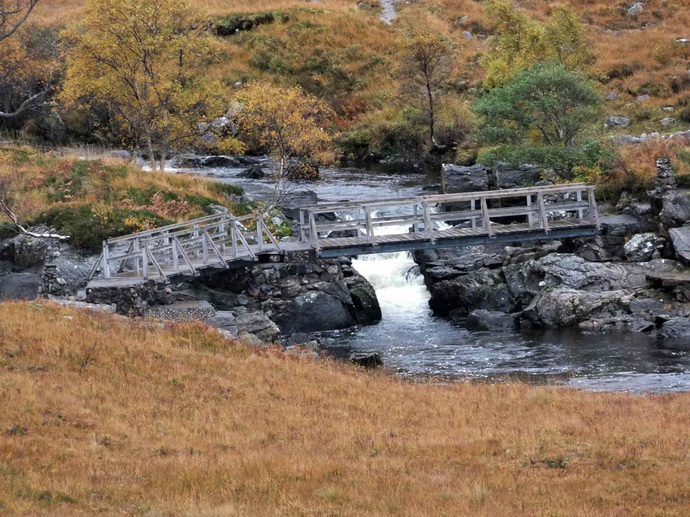 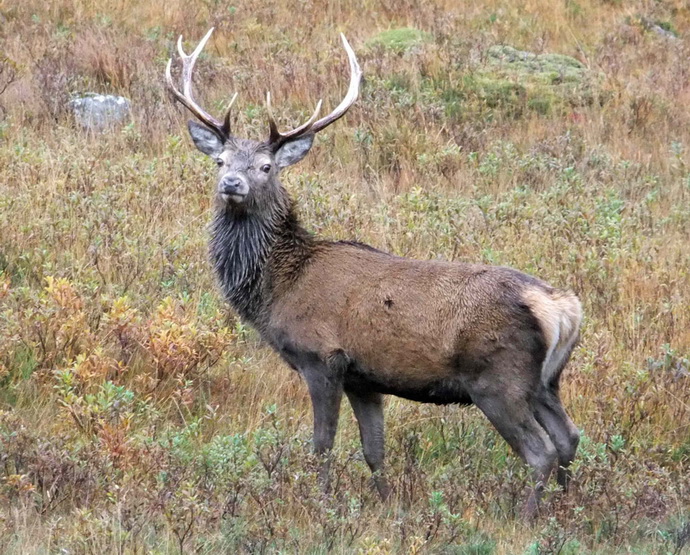 It took over an hour and a half to cycle to Iron Lodge. While I had a long day ahead of me, I peeked through the windows and wandered around the back and tried the back door which was locked. However, returning to the front of the building, I tried the front door which, much to my surprise, was unlocked - time to explore! 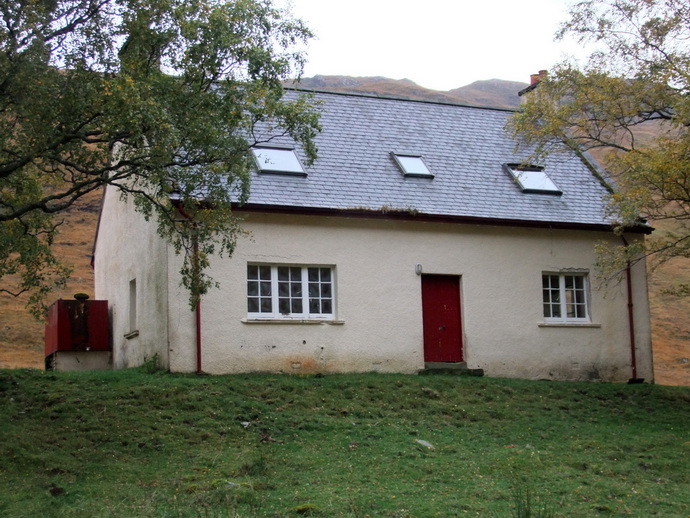 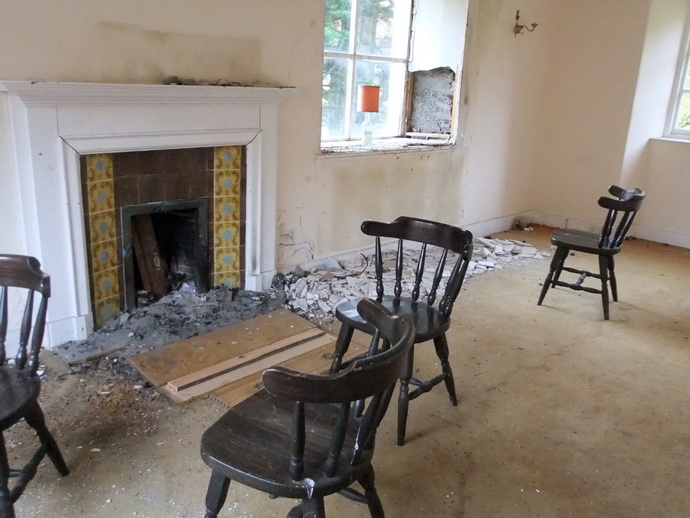 Internet research suggests that Iron Lodge was abandoned as a dwelling in 2009 or earlier, presumably due to rising damp. The floor has been pulled up in the utility and damp plaster pulled off the walls. I am curious to know the estate's intentions. Are they leaving it open as a bothy? With adequate damp proofing, it would make a great club hut or large bothy, though the kitchen and bathroom are not typical bothy features!

A track zig-zags up the hillside behind the bothy to initially gain height with ease, after which the ground is reasonably firm going and a ridge of a gentle gradient can be followed to the summit. The summit was in cloud limiting my photography to a summit selfie. 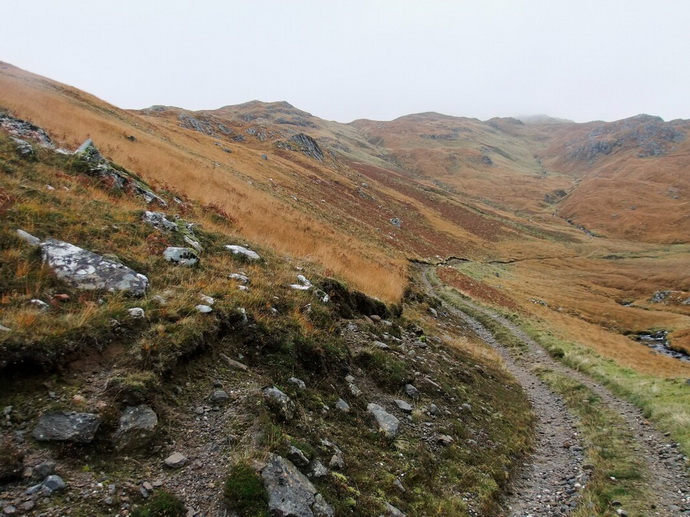 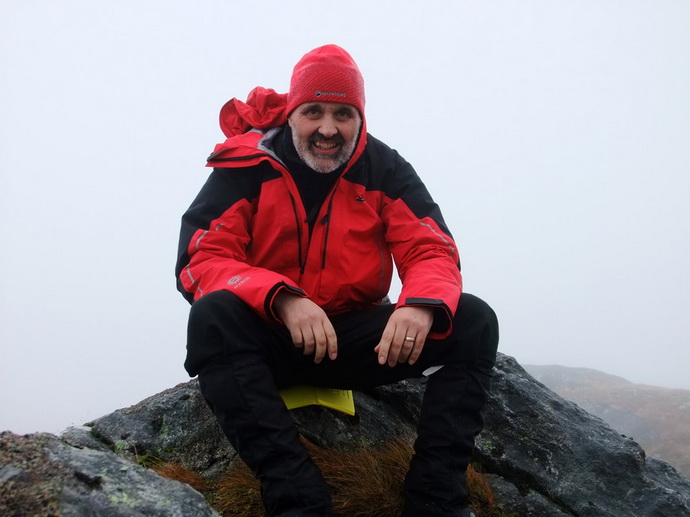 After warm, rather than hot Irish Stew, I headed north-west towards the relentless slopes of An Socach. I had started the day with intentions of including the Graham, An Cruachan, but was already thinking that perhaps it was best left to another expedition, perhaps from Moal-bhuidhe.

Loch Mhoicean has an outlet at both ends and I considered which end would be best to cross on my return route. 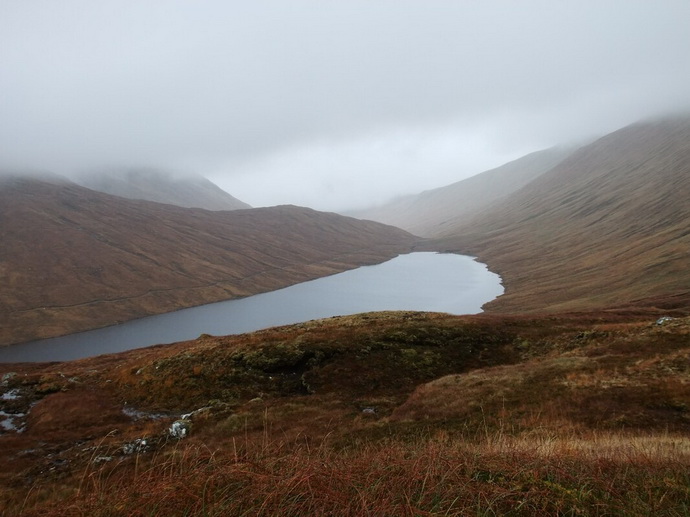 It was quite a hard pull up onto An Socach, though there was a flatter section at around 750m to allow some recovery before climbing the last 300m/1000ft to the circular triangulation pillar that marks the summit. 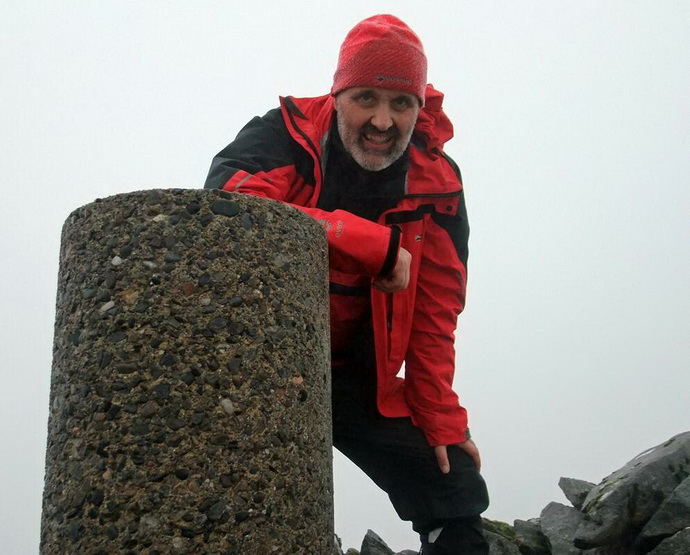 I descended north-west as though approaching An Cruachan, but due to the limited daylight left and the unappealing mist ahead, I headed down into the glen before the gentle but wet rise up to Loch Mhoicean, reaching a much better (though more unsightly) track a short distance before the loch.

Sunset was about 17:42 and it was getting quite dark by the time I reached the bike. I was glad that I had a good front bike light for the ride back to the car. I passed a couple in a Hilleberg tent on the way back and chatted to them for a while. I think they were a little surprised to see me and the lady rushed out to natter, almost allowing the porch fly to fall against their hot stove in the process. The gentleman seemed very concerned about this but the lady didn't seem too worried about the prospect of their home for the next few nights going up in flames!

I arrived back at the car at around 20.00 and by the time I arrived at Ratagan, the Saturday night quiz was well underway.

I slept well that night, happy that I had made good use of the day, even if the weather was misty and damp, and I only bagged two of the three peaks. As Meatloaf will tell you, "two out of three ain't bad".

Footnote:
The last time I climbed An Socach was 19 April 1992. This was part of a multi-day expedition from the Clunie to Strathcarron railway station using a Mountain Range Bivvy Tent and bothies. This section of the walk started at the Seldom Inn (private bothy to which I was allowed in by fishermen), climbing Sgurr na Lapaich, An Riabhachan and An Socach before heading for Maol Bhuidhe. I have no photographs of the expedition, which was probably the most adventurous thing I ever did.

Plotting the route on the Walkhighlands mapping gives a total ascent about 100m higher than when using MemoryMap. No idea why!

Lovely day out in those autumnal colours

Those gates are oh so familiar....and you may need to leave your car there again for An Cruachan. Never mind, it's a lovely glen and well worth a revisit. We thought we had spotted a Jacobite re-enactment from its summit, but it turned out to be German girl guides with impossibly huge packs, wearing long skirts and carrying banners. Behind, at a distance strolled a very dishy young man who introduced himself "I am the priest." Can't promise that for your visit.

Sgurr wrote:Lovely day out in those autumnal colours

Those gates are oh so familiar....and you may need to leave your car there again for An Cruachan. Never mind, it's a lovely glen and well worth a revisit. We thought we had spotted a Jacobite re-enactment from its summit, but it turned out to be German girl guides with impossibly huge packs, wearing long skirts and carrying banners. Behind, at a distance strolled a very dishy young man who introduced himself "I am the priest." Can't promise that for your visit.

Are you sure that it wasn't just a surreal dream?

Could have been, it was so hot, and so far away from anywhere else, might have been hallucinating, but it conned the camera too

Good effort Steve, given the conditions and high probability of being struck down by "the bug"!